I realize this particular 1964 Ford styling documentary is fairly well known, and I suspect that many of you reading this have watched it already. If not, you absolutely should, because it’s wonderful, a real document of where Ford was looking in the early 1960s, design and technology-wise. I feel like there’s a lot that can be covered about this short film, so I’m going to allow myself to just focus on one particular car shown here: the Aurora concept station wagon, which, if you look at it through modern eyes, really feels like it ended up becoming a predictive template of modern SUVs. I’ll explain.

First, though, watch the video:

It’s amazing that Ford decided to start with Egyptian chariots to begin their wheeled-vehicle stylistic journey, which shows a real commitment to telling the whole story. The video then transitions to Ford’s specific designs and concepts, focusing on three main concept vehicles: the 1963 Allegro Fastback Coupé (which was part of the early Mustang design story) , the Cougar II GT car that feels like Ford’s answer to the Chevrolet Corvette Sting Ray, and the one I want to focus on here, the Aurora station wagon concept. 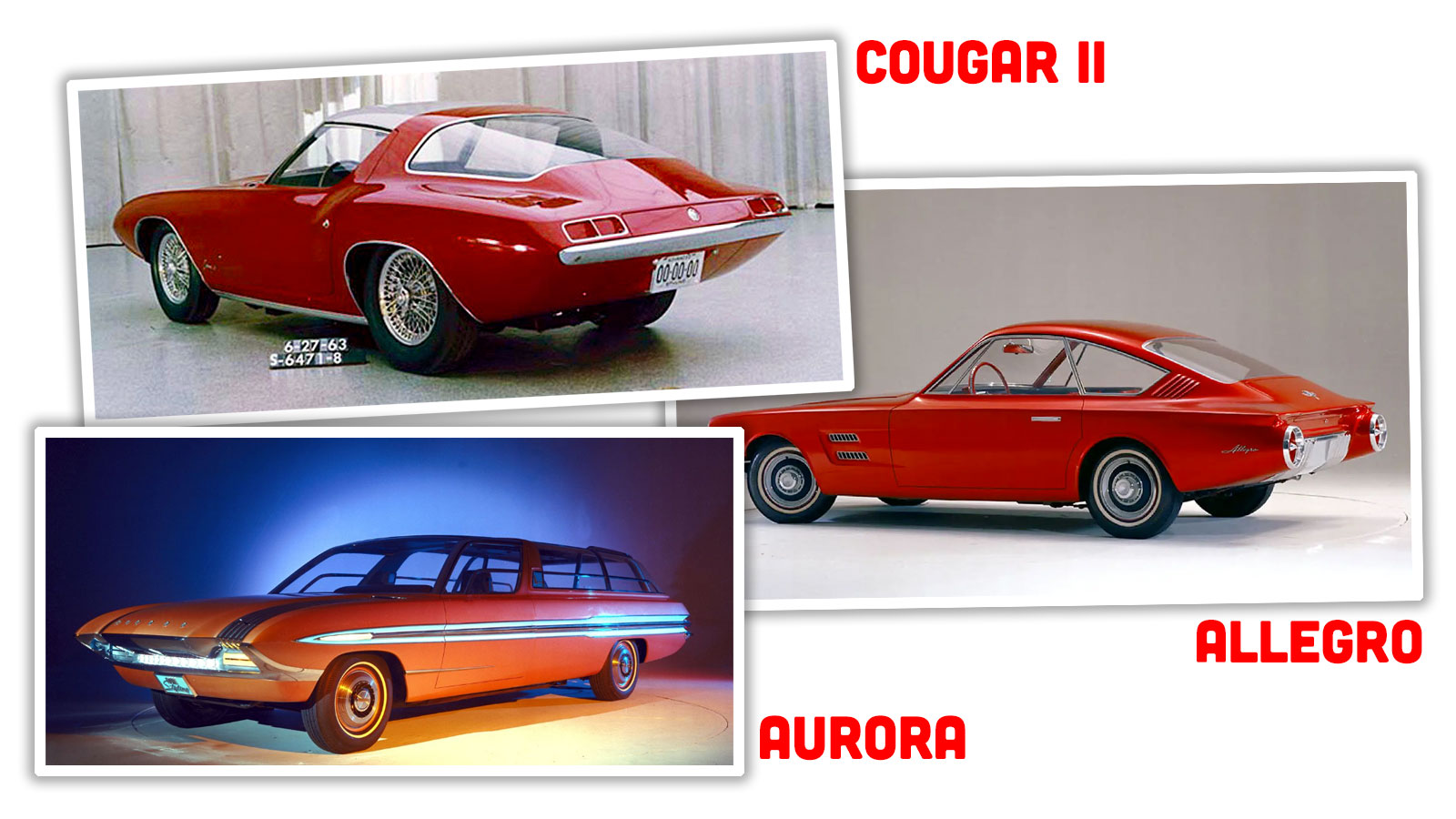 Each of these cars deserves its own post, and we’ll get to them at some point. But for now, let’s look at the Aurora and try to see it through the lens of modern SUVs, so I can show you why I think it’s so prescient. 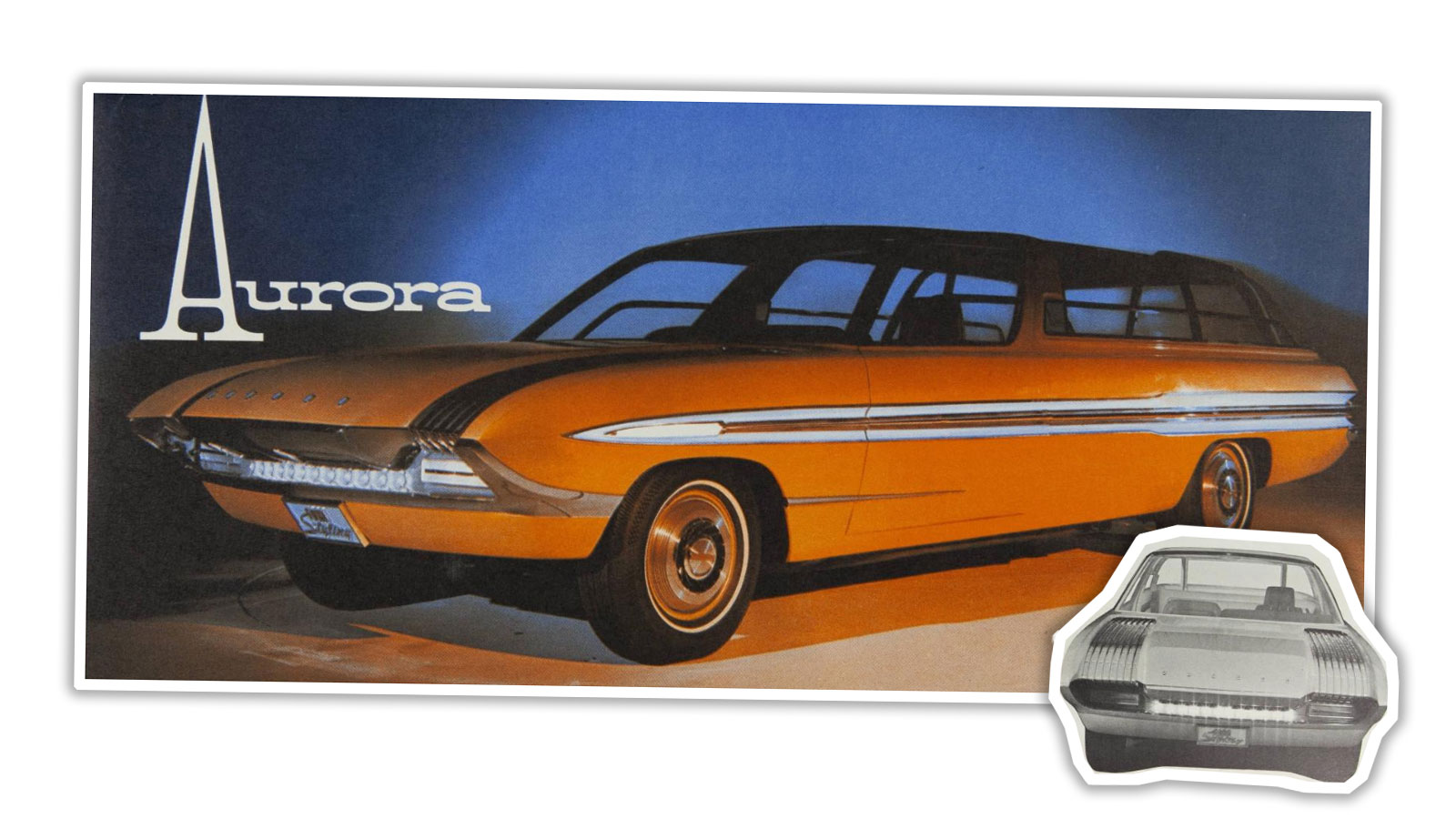 The Aurora was clearly a station wagon, which I know many of you are thinking are near-extinct, but I’m going to argue that SUVs are just taller wagons on bigger tires. The body design is essentially the same, and the goals they accomplish are effectively the same, too. The Aurora didn’t predict our weird current fetish for height or huge tires, but that’s okay, because what it did predict I think is more on target for modern cars, anyway: a focus on tech.

The Aurora was a 1964 tech demonstrator, and as such contains a surprising amount of indications of what we take for granted today. 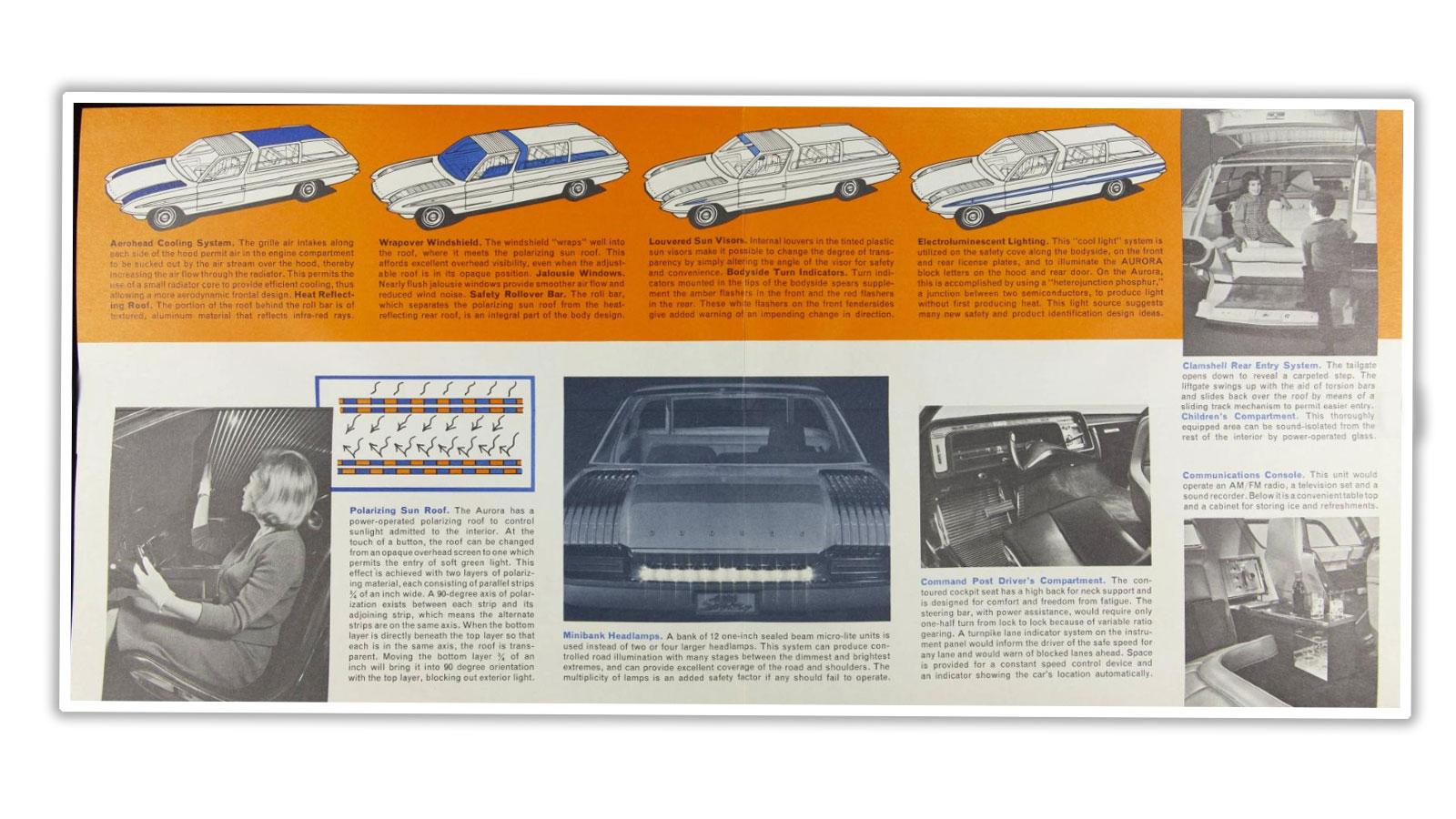 The lighting, for example. Look at the lower center picture above: the Aurora used a dozen one-inch sealed beam headlights for its forward illumination, which feels close to the sort of LED-based, multi-light-source headlamps and other lighting we see today. Plus, accent lighting was pioneered on this concept, with electroluminescent streaks down the sides, which reminds me of the sort of LED lighting effects we normally see inside modern cars, though puddle lights are also an exterior modern car affectation that feels similar.

Inside, on the dash, we see the first glimmers of a center-stack screen with navigation (even if that screen looks like it houses a paper map), as Ford describes a “position indicator map” that “automatically adjusts to the location of the car.” This is Ford’s early dream of what would become GPS satellite navigation decades later. Oh, and there’s a yoke steering wheel, as seen on some modern Teslas and Lexuses, and like the Lexus one, it even had variable-ratio steering, a lesson from 1964 Tesla could have learned from. 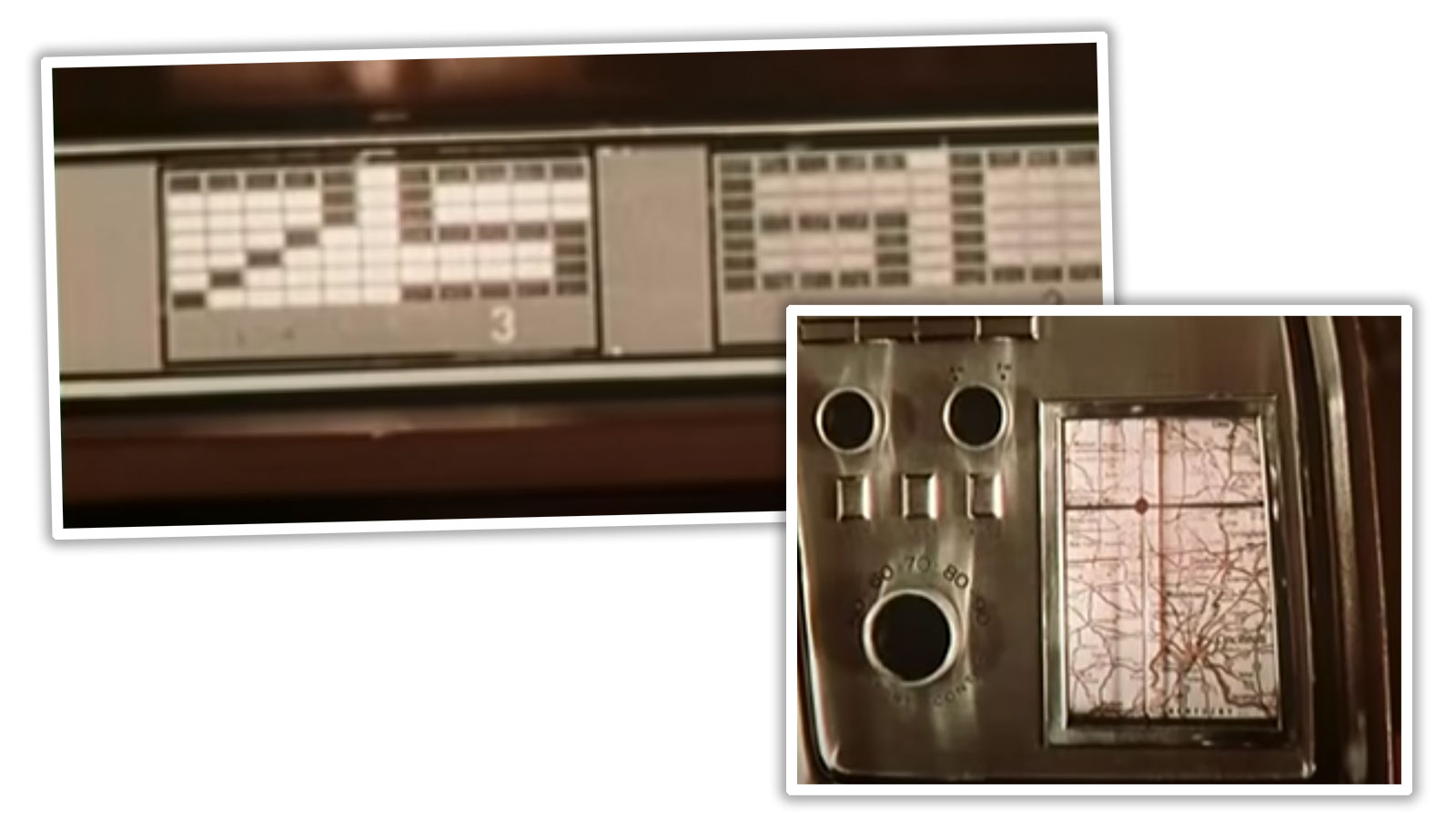 Also fascinating and what may be the first ever attempt to make a truly digital, dot-matrix dash instrument display, Ford talks about a “lane speed indicator” that seems to show speed limits lane-by-lane.

What I find incredible is that the speed is indicated via numbers rendered on several 11 x 7 dot-matrix screens. What display technology is Ford using here? Could these be liquid crystal displays (LCD)s? If so, they’d be among the very first, certainly the first used in an automotive context, as the LCD display was invented that same year, 1964. They look like early reflective black and white LCD screens. I’ll try and confirm this, because if they are, this is actually a pretty significant automotive milestone. 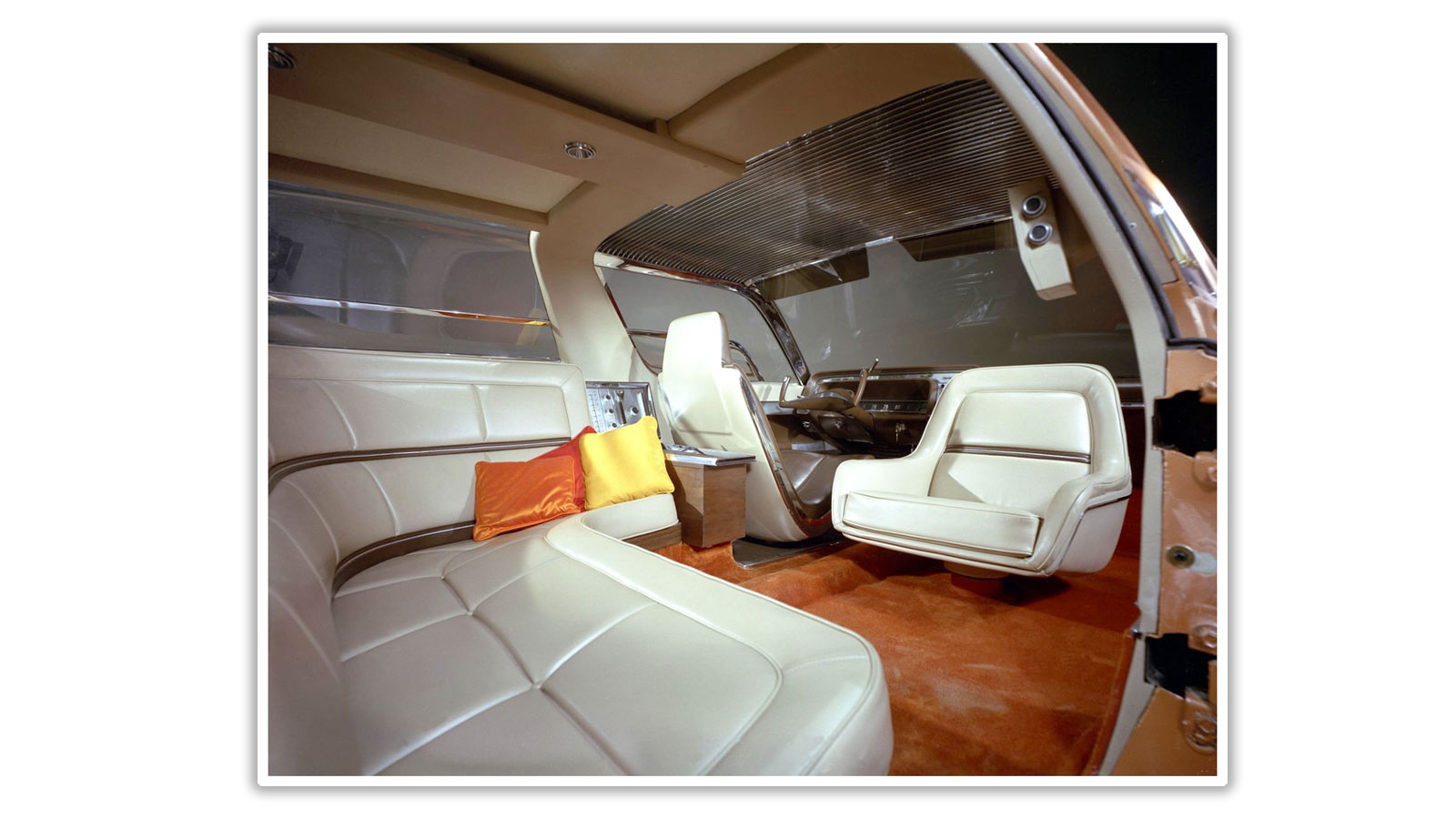 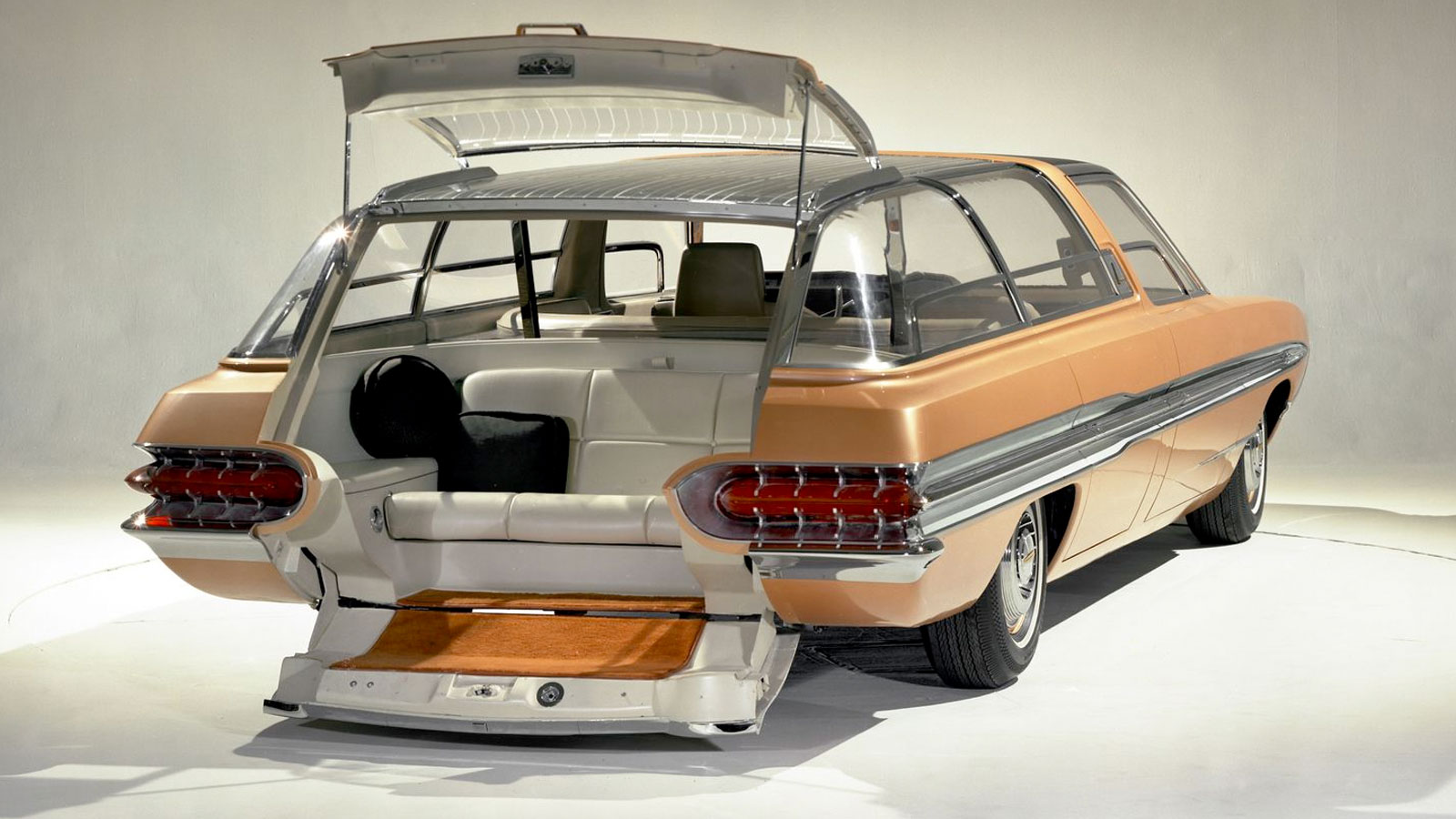 Modern SUVs also tend not to have such fantastic clamshell tailgates exposing a rear-facing third row, but third-row seating is definitely common on its own. 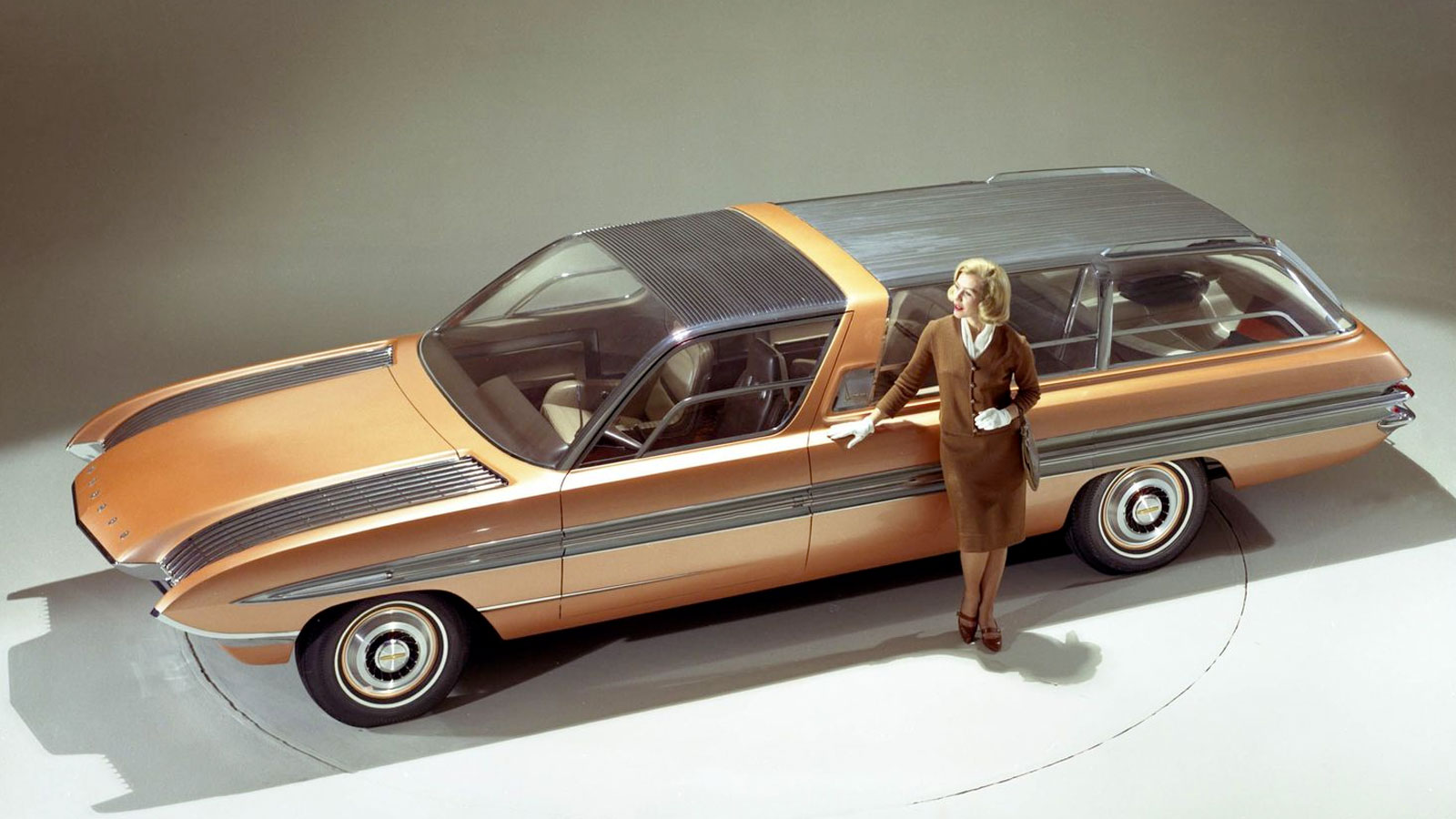 The roof also features a glass section, an incredibly common option on modern SUVs, and like those SUV glass roofs of today, the Aurora’s blocked UV rays and reflected heat.

There’s so much at the core of the Aurora that feels like a premium SUV today from many automakers: big, roomy, jam-packed with the latest tech, prioritizing comfort and gadgetry, an inside-out approach to a car. I’m not judging this here, just pointing out how this fascinating and dazzling concept from nearly 60 years ago so closely reminds us of where we are today.

(Pictures from Ford, Henry Ford Museum. And thanks to Michael!)

I'm a co-founder of the Autopian, the site you're on RIGHT NOW! I'm here to talk to you about taillights until you cry and beg me to stop, which I absolutely will not. Sorry. Hug? Also, David's friend.
Read All My Posts »
PrevPreviousAutomotive Would You Rather: Eternally Damp Seats Or Magic Box Of Crap Edition
NextCold Start: Minor ThreatNext