Last year, when Tesla introduced a steering yoke instead of a traditional wheel on its refreshed Model S, I wasn’t a big fan. I’ve driven cars with yoke-style wheels, and — while they may work in specialized, usually racing contexts — in the real world where you have to back up and make three-point turns and parallel park, they suck. Now Lexus has shown a similar-looking steering yoke on its new 2023 Lexus RZ 450e battery-electric SUV. This yoke is different under the surface than Tesla’s implementation, but is still fundamentally useless, save for generating some stupid controversy and reminding us that the justifications for yoke-type wheels are mostly bullshit.

I guess we may as well address the controversial part first, because I got sort of unwillingly yanked into it, thanks to the electronic global-annoyance system known as Twitter:

I discussed this with former @Jalopnik editor @JasonTorchinsky (which for some unclear reason doesn't follow me, hint hint????) and he said "different writers – different opinions"

I guess that's how CNET would explain it here – the first guy hates yokes, the 2nd guy loves them
..

So, the issue seems to be that a lot of Tesla fans are quite cross, quite cross indeed with CNET, who previously had an article calling Tesla’s yoke dangerous, and just recently had one that referred to Lexus’ similar-looking yoke as “kinda wonderful.”

The accusation of hypocrisy and some sort of organized anti-Tesla agenda really only make sense if you very carefully manage to not read either article beyond the headlines, something that’s actually quite easy to achieve, if you’re determined.

The reason for the disparity that the twitter user who mentioned me stated – differing author opinions – isn’t even what I’d attribute this to, since the two yoke systems are so technically different. 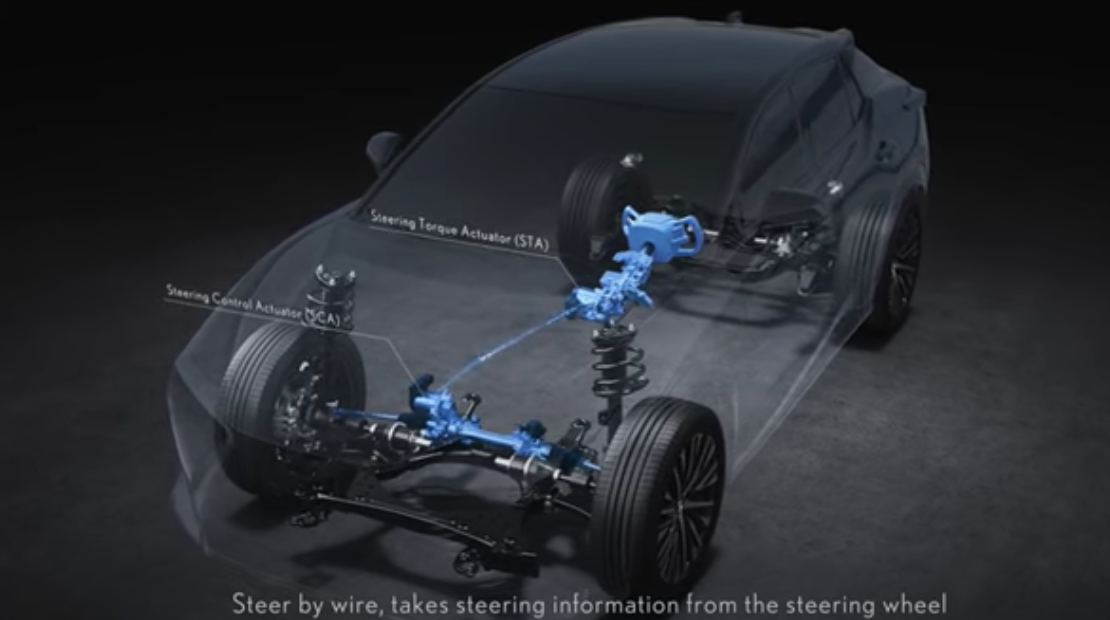 Things fall apart if you actually read the article, which is more about Lexus’ variable-ratio steer-by-wire system that doesn’t appear to use any physical, mechanical connection from the yoke to the steering rack at all, allowing the steering ratio to adapt dramatically based on speed.

Lexus even made a nice little video showing how it all works:

The Lexus Steer-By-Wire system limits the lock-to-lock turn to 150° at low speeds, so you’d never need to hand-over-hand the wheel for parking or tight low-speed turns or whatever, which is entirely different than Tesla’s system that uses a conventional steering column and requires much greater yoke-turning at low speeds, which can leave hands clutching for phantom steering wheel segments. 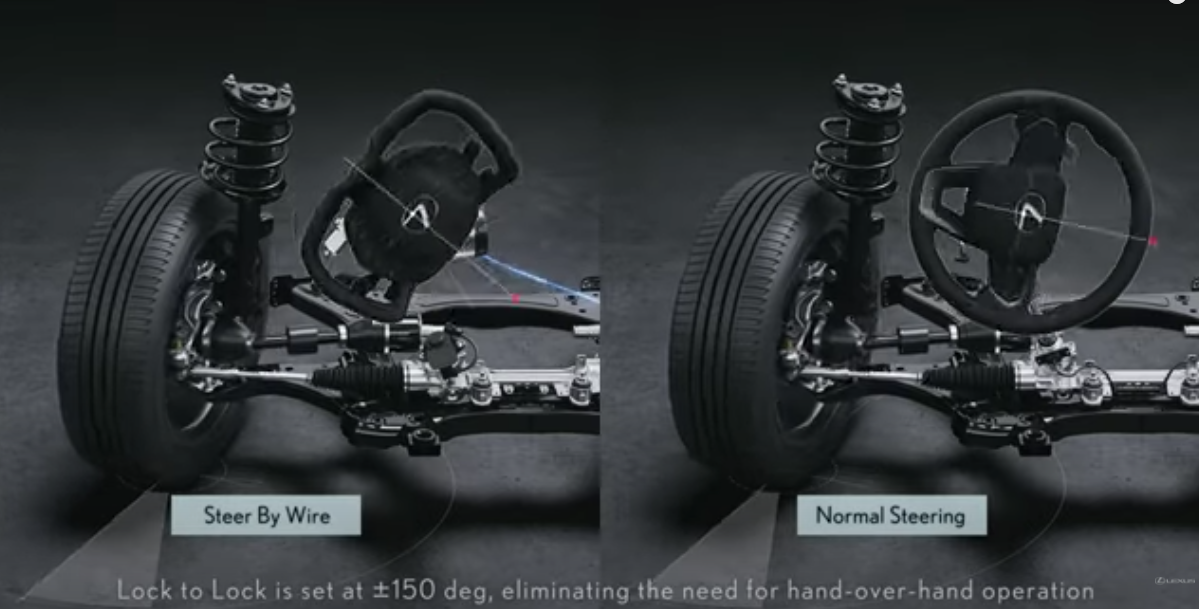 So, we’re comparing apples and electronically-actuated apples with no physical connections to apple steering apple racks here, and they’re not the same thing. The yokes look superficially similar, but that’s it.

Now, even if Lexus seems to have done a lot more thinking and engineering for its yoke as opposed to just swapping a wheel for a not-wheel, nothing about this steer-by-wire system actually requires a yoke-shaped steering device, and this would work fine–possibly even better–with an actual wheel.

The CNET story mentions that there’s still a learning curve involved with this steer-by-wire/yoke setup:

When navigating tight turns, it’s easy to initially apply way too much steering input since the yoke is so sensitive, and then you have to make midcourse corrections to get the vehicle’s nose where you want it. This back-and-forth can result in a discomforting side-to-side body motion that makes it feel like you’ve never driven before.

Also, I keep finding myself trying to steer hand over hand and reaching for a rim that doesn’t exist. What is it they say about old habits?

So, now that the yoke concept has been installed on a car that is specifically designed to compensate and enhance the experience, and it’s still something that requires a “learning curve,” I think we can safely say that fundamentally, the yoke kinda sucks, and isn’t actually solving any problems.

[Editor’s Note: Wow Jason, wow. I never thought you’d be anti-fun, but now you’re joining in with the other journalists on twitter complaining about a yoke many of y’all have never even used. Look, nobody needs a yoke. But nobody needs a manual transmission, either. And most people don’t need removable doors on their Jeeps. These things are fun. Different. Weird. And I get it, the yoke is changing something that’s clearly been established as the perfect steering solution (that something being a circle), so it’s a bit silly. But if it’s not hurting anyone, and people want to buy it, I’m all for the weirdness. -DT]

[Writer’s Editor’s Note: I maintain a yoke is the opposite of fun. It’s not even weird, really. It’s for people who don’t like cars. Fun is the Motocompo folded into the Honda City’s trunk. Fun are doors that open in crazy ways. This is just dipshittery. — JT]

The justifications usually given for the yoke mention that the view of the instrument cluster is less obscured, which is certainly true, and I guess that’s great, until you actually really think back and try to remember the last time you were in a car where the instruments were significantly blocked by the wheel.

I feel like I may have encountered it a couple times, likely because of my freakishly tiny stature, but I honestly can’t say not being able to see the instruments is anything close to a problem that needs solving. I’ve driven so many cars, and nearly every time I can see the instruments just fine.

Also, just how good a view do you really need? What are you reading on that instrument cluster, Finnegan’s Wake? No. You’re not.

Nobody is driving by the instruments, or at least, not well. You glance at them to see how much faster than the speed limit you’re going and how much fuel/charge you have left, and maybe more scrutiny if an unexpected light comes on or if you smell something funny and try to remember where the temperature gauge is.

You want to be able to see your instruments, and in 99.whatever percent of cars you can, just fine.This wasn’t a problem at the top of anyone’s list.

The other reason for yokes that is often trotted out is as some kind of stepping-stone to fully automated vehicles that don’t yet exist but when they do likely won’t have steering wheels, or maybe they’d have steering interfaces that hide away or may as well turn to liquid and reform into a dash sculpture, which they may as well, since those AVs don’t exist yet, either.

As the CNET article states:

He [Takashi Watanabe, the RZ 450e’s chief engineer] also noted that as drivers become more familiar with the technology, it could also serve as a stepping stone to autonomous vehicles with steering wheels that completely fold away when not in use. Basically, in its own way, the yoke is helping to prepare motorists for a self-driving future.

Exactly how is the yoke “helping to prepare motorists for a self-driving future?” By making human driving suck a little bit more so people will want to not do it? This is a made-up reason. You still need to steer the car with it. It’s not preparing motorists for shit.

Look, we all know the real reason why yokes exist at all right now: some people think they look cool. That’s it. There’s no good reason to have a yoke in your normal street-driving car, you just may want one because it reminds you of KITT or a spaceship or whatever.

And, look, that’s fine. Cars are not rational things, they never have been, and they never will be. If you want something in your car just because you like the look of it, then welcome to the world of automotive design, which has been making cars with useless shit that looks cool for over a century.

Just own it, yoke-lovers. Lexus’ considerable R&D to make a yoke less bad and accomplishing precisely that goal–less bad–should be your reminder that it’s not worth trying to justify these things. If you like them, you like them, and I hope you and your yoke have a wonderful, rewarding relationship together, fumbling in parking lots and making phaser sounds while you’re on the highway.

Let’s just all quit pretending there’s an actual reason for this shit, though, okay?

I'm a co-founder of the Autopian, the site you're on RIGHT NOW! I'm here to talk to you about taillights until you cry and beg me to stop, which I absolutely will not. Sorry. Hug? Also, David's friend.
Read All My Posts »
PrevPreviousDrop-Top Toyota Celica or Doorstop-Shaped Subaru XT6: Choose Your Pop-Up Headlights
NextThat American EV Plant Hyundai Plans To Build Might Be Coming To GeorgiaNext