Facebook-f Twitter Instagram Rss
Menu
Menu
Home » My Yamaha U7E’s History May Be Lost To Time, But At Least It Has A Clean Carburetor

My Yamaha U7E’s History May Be Lost To Time, But At Least It Has A Clean Carburetor 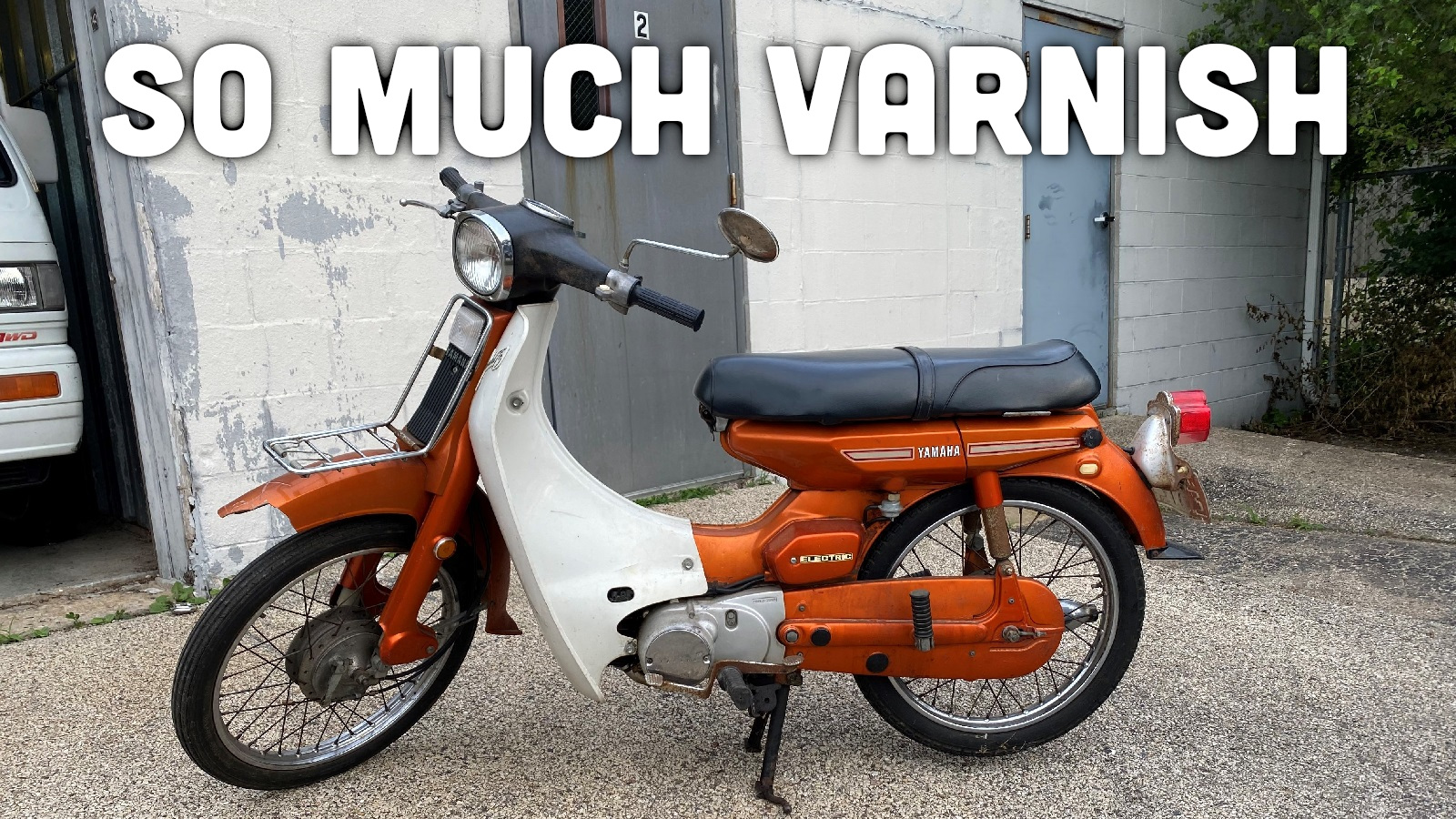 A couple of weeks ago I launched a project to restore the 1972 Yamaha U7E motorcycle that’s been sitting in my garage for years. I’ve finally started tearing it down and examining how much work that I have ahead of me. I have good news and I have bad news. The good is that I found an interesting alternative to carburetor cleaner. The bad? Not even Yamaha knows about this motorcycle’s history.

When I started this project I promised weekly updates. I do apologize for missing my own deadline. Between the holiday and a press trip I’ve rarely been home. But I am now, and that means we’re going to be turning some wrenches!

More On Its History 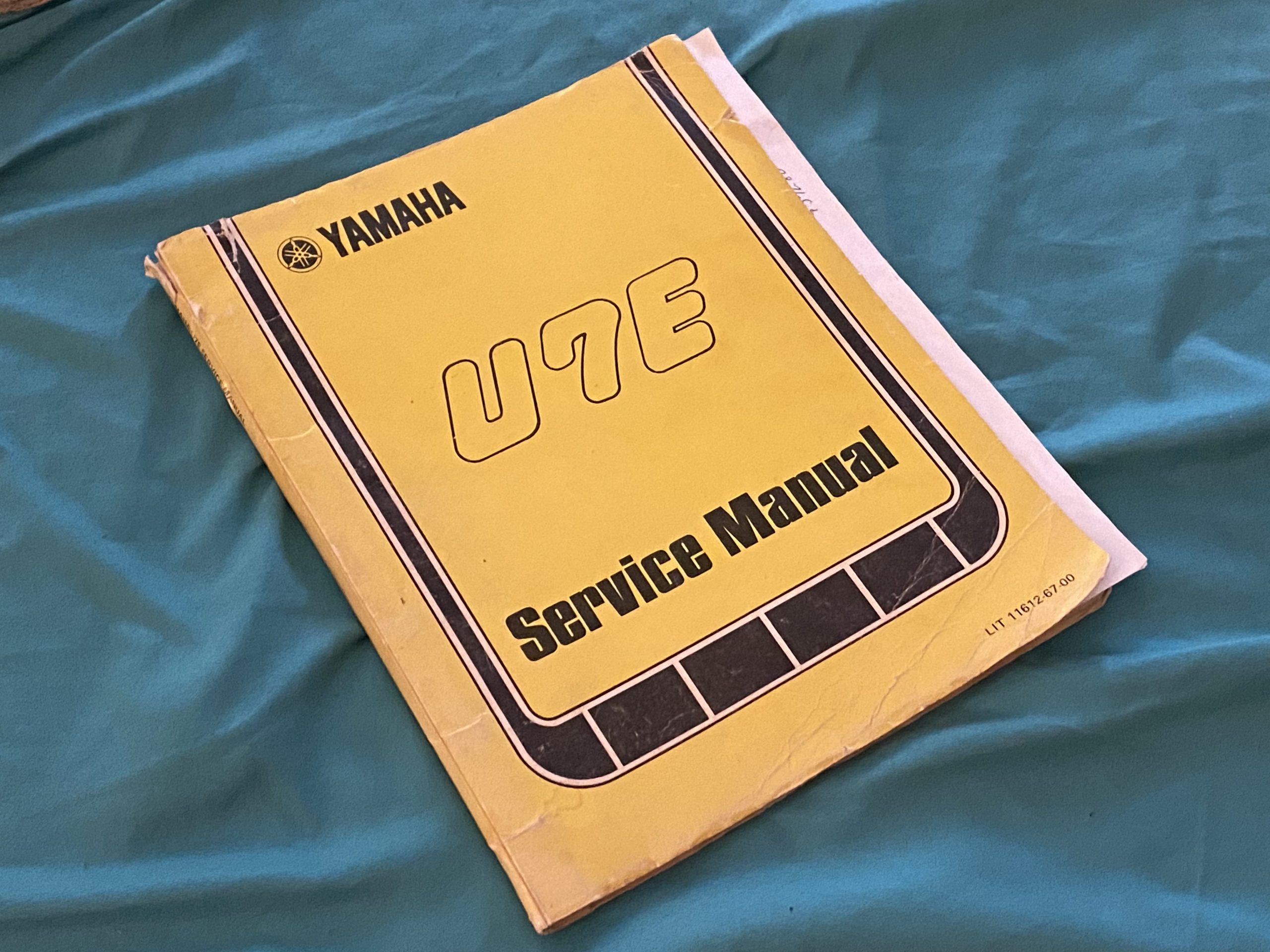 After I wrote my introduction to this project I reached out to Yamaha. Usually, the manufacturer of a vehicle will have something on hand, be it advertising materials, press materials, manuals, or perhaps even just images. For example, Volkswagen was able to give me service manuals for the Phaeton that I used to own. ZF was able to lend its knowledge for my RTS bus’ transmission. But for whatever reason, Yamaha doesn’t seem to have much of any records on the U7E. My contact with Yamaha searched the archives and even had his Japanese counterpart search the archives. They found nothing.

But we do know that the Yamaha U7E was definitely a thing since Yamaha printed service manuals for the motorcycle. Unfortunately, I may never know how many of these were sold, why it was given the name that it has, or why it was such a short-lived motorcycle. It also means that from here on out, my service manual for it is practically my bible. 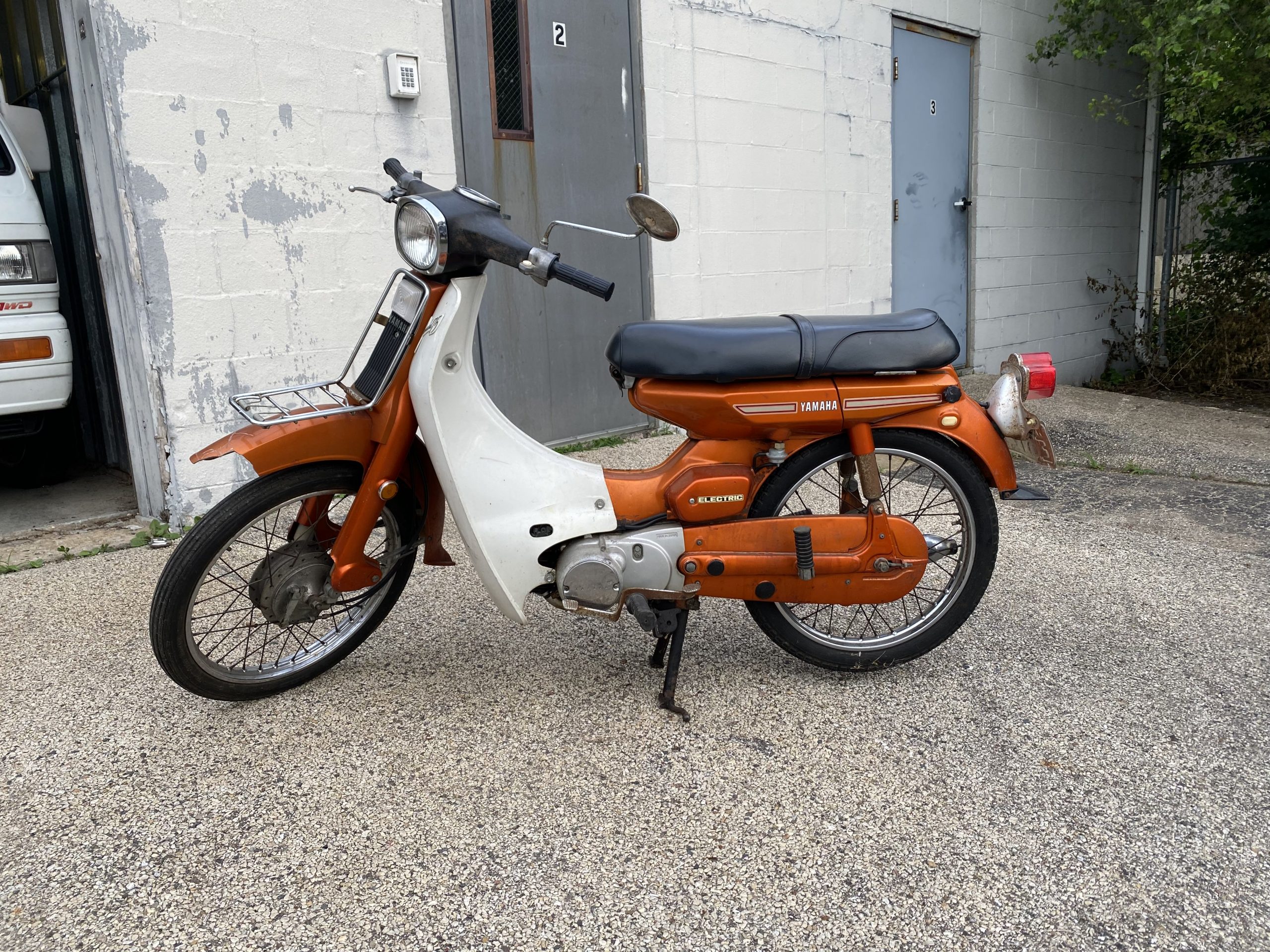 Back when I repaired old motorcycles for fun, I always started with the carburetor. I’ve found that hearing that engine run, if even just for a few seconds, will motivate me to move forward on a project. So I actually try to get a vehicle running before I do anything else.

For this Yamaha, I started with removing the leg shield. If you’re not a motorcyclist and you’re wondering what this is for, it’s to keep the rider clean. Motorcycle tires kick up some dirty stuff from oil, water, rocks, or anything else on the road. Part of the appeal of these kinds of small motorcycles is that the rider can commute to work–perhaps even wearing a business suit–and be relatively protected from debris. 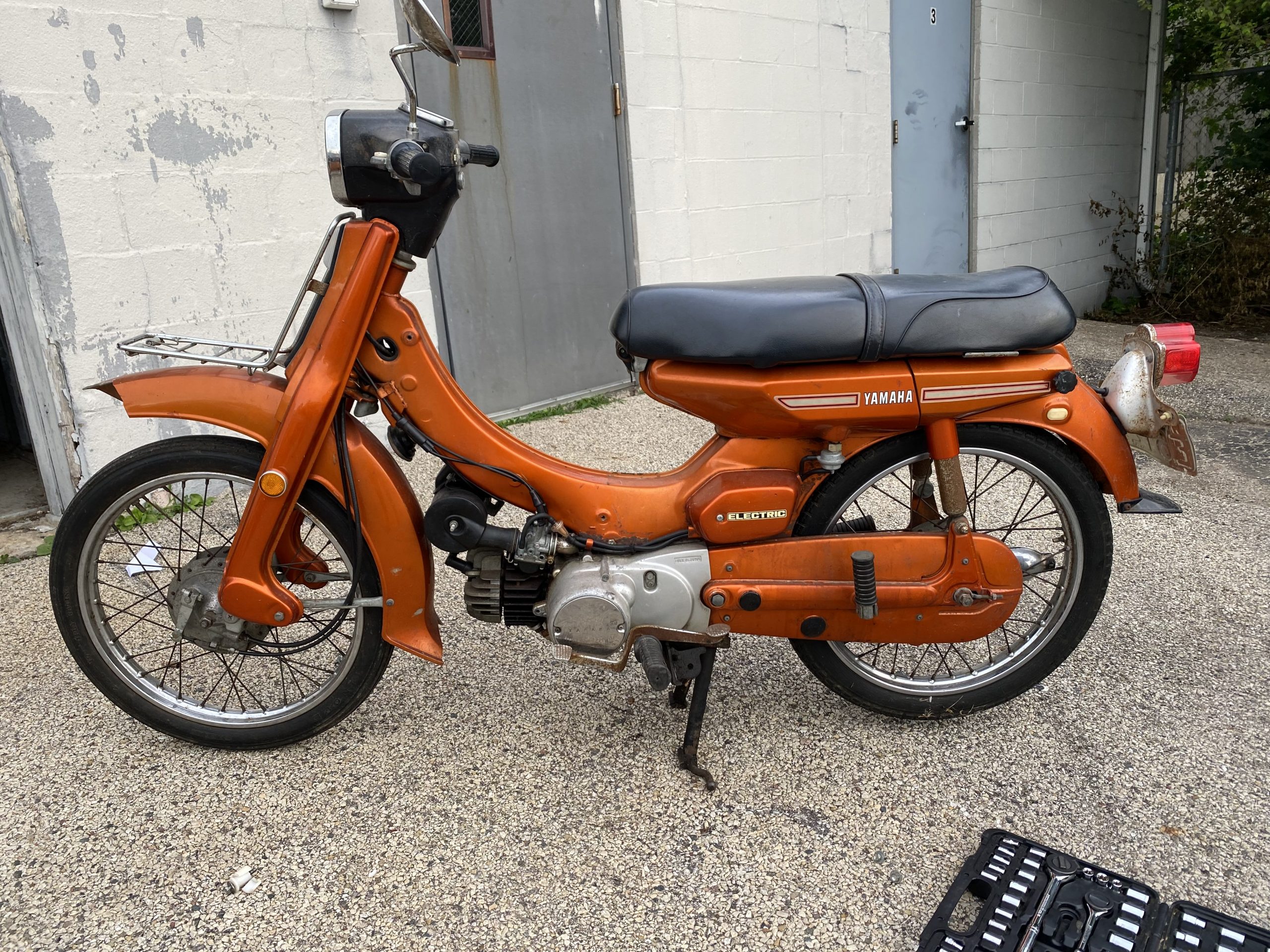 The shield is held on with six bolts. In my case, they were barely finger-tight. Perhaps most importantly, I found no rust on them or in their threads.

However, upon removal of the leg shield I did discover that the motorcycle’s frame is a smidge rusty. This doesn’t look too bad and I think a visit from the wire wheel will clear this up. On the other side there’s just bare metal that hadn’t yet started to rust. If I had to wager a guess, the leg shield probably rubbed the paint off in this area over time.

At any rate, there’s also the carburetor in all of its adorable glory. There’s supposed to be a Mikuni VM15SC here, but in 2014 a motorcycle shop installed a Dellorto equivalent. 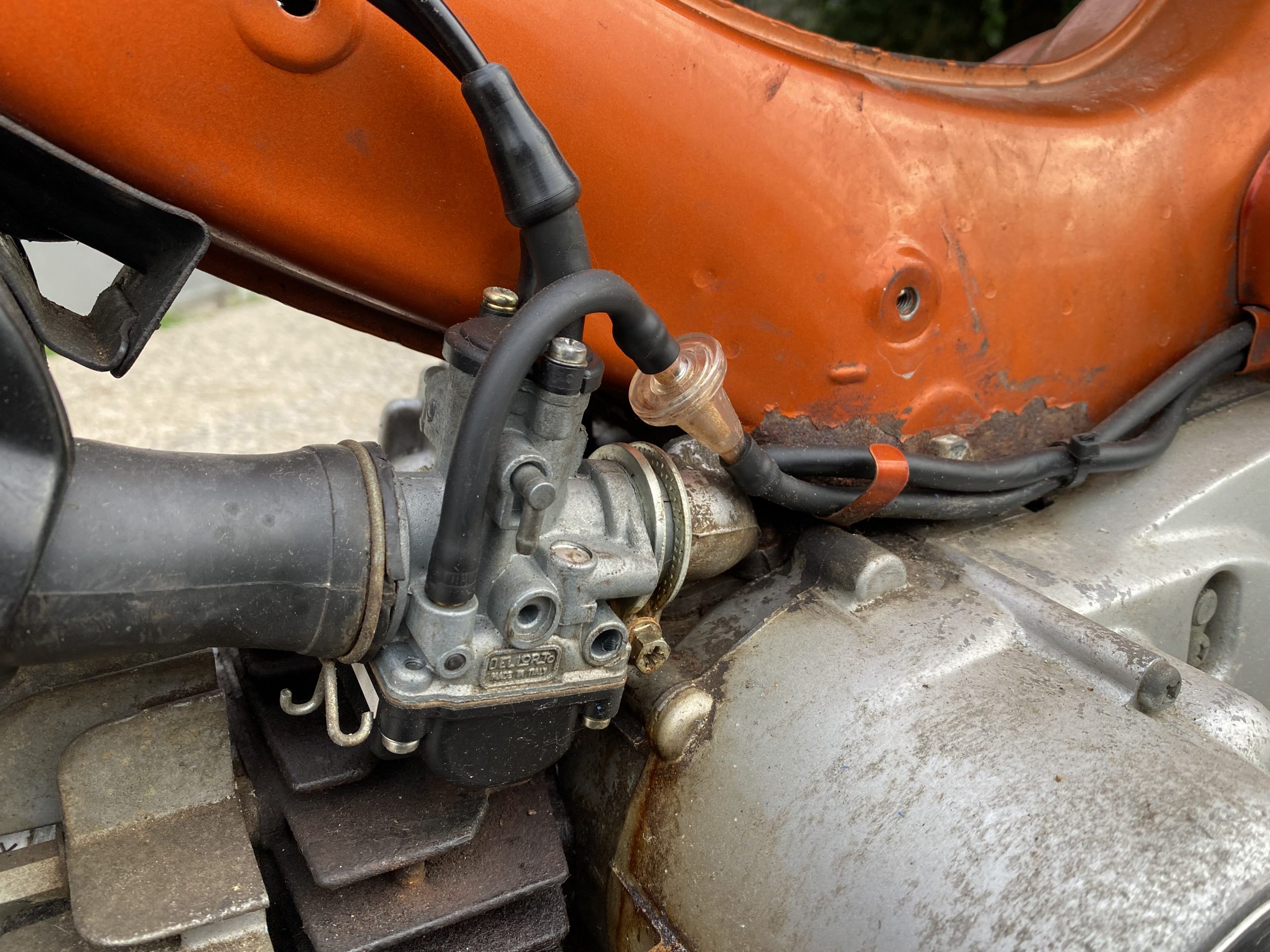 Removing the carb is easy. I started by opening the airbox and pulling the stiff intake hose off of the carb. Then I loosened the clamp holding on the carb and it came off with only nearly bloodying my knuckles.

When I bought this motorcycle, its owner told me that it wasn’t ridden after the visit to the shop. So the fuel in the tank and the carb has varnished. The fuel had not just varnished, but it wasn’t even a liquid anymore. And once I further exposed the carburetor to air the smell was pungent. 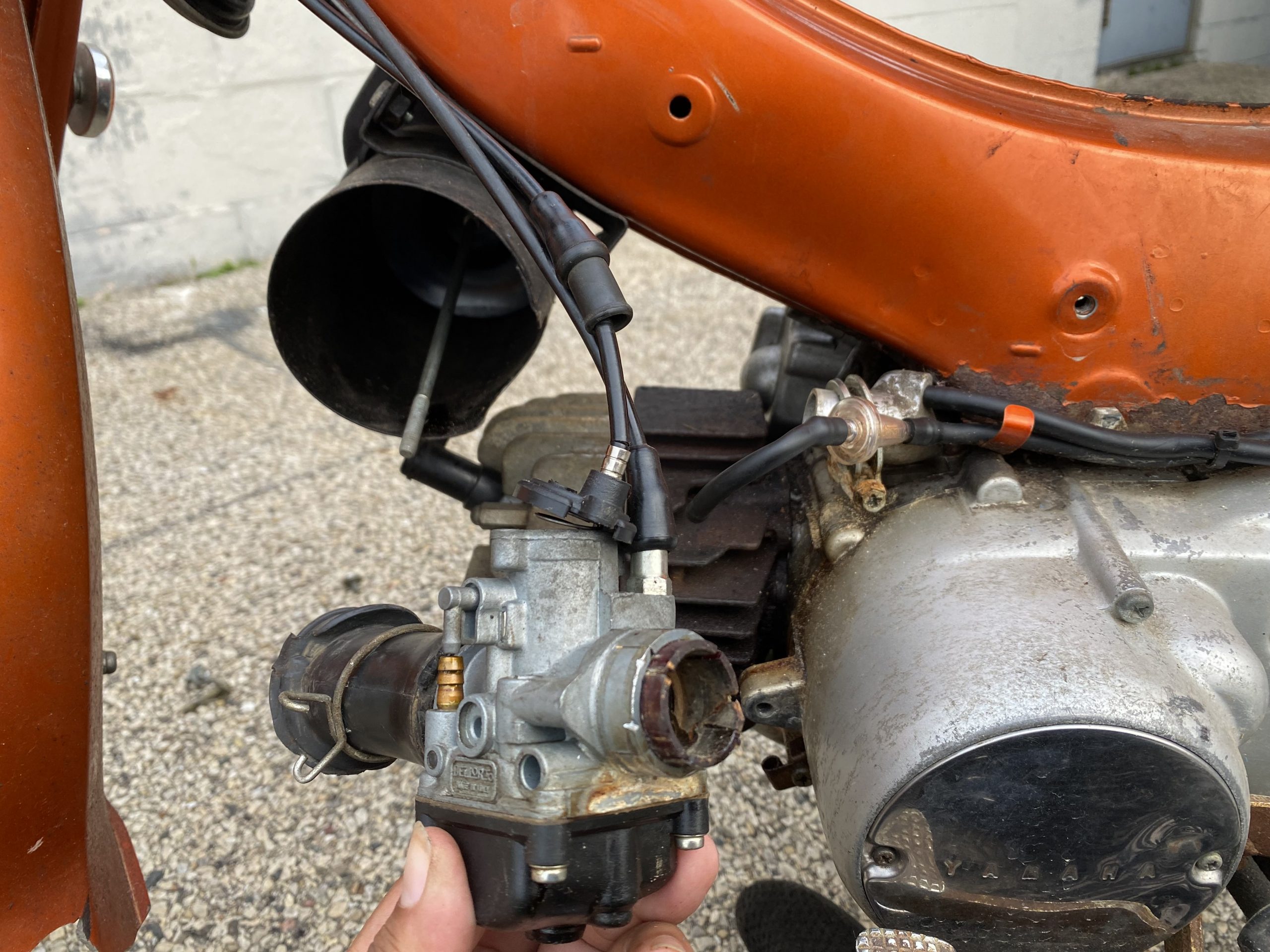 Admittedly, this fuel system is a bit worse than I’m used to. I’ve owned 20 to 30 motorcycle projects in my life, but I was careful in choosing each one. I usually went for the ones with dry tanks, missing carbs, or fuel systems that didn’t seem too far gone. When it came to getting those motorcycles on the road, getting them started was sometimes as easy as spraying a bunch of carb cleaner into the carbs without even taking them off. Other times, I removed the carbs and threw them into a bucket of carb cleaner. 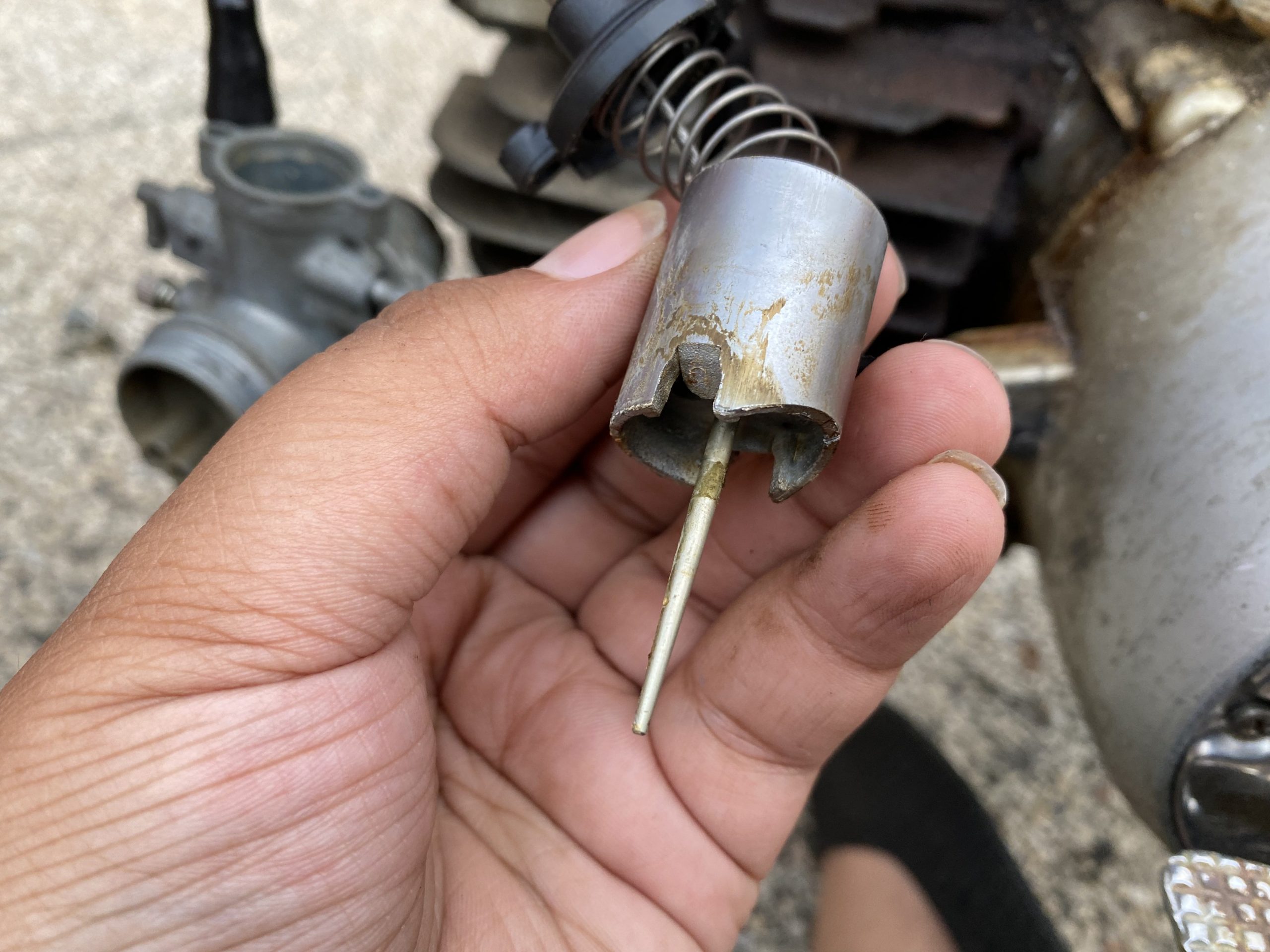 It took a lot of prying with a screwdriver to free it. That’s when I realized that this carburetor was going to need more than a few sprays of carb cleaner.

Moving on, I decided that since the leg shield is off I should remove the mudguard. I have a replacement at home that’s in great shape and would make the motorcycle look a million times better. It looks like four screws hold it on. Two came out easily, but these two are a bit of a pain. 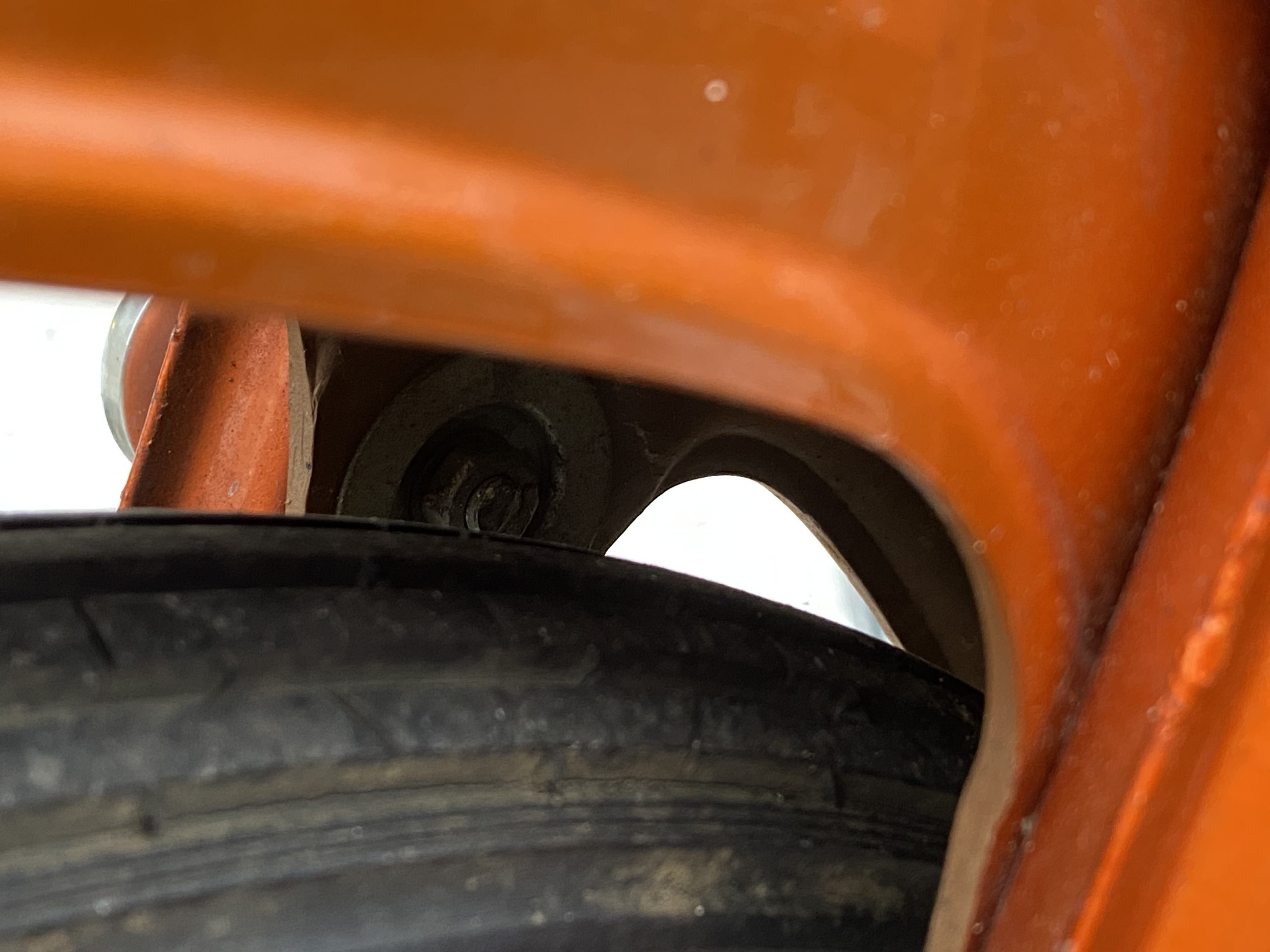 They could be removed with a wrench, or if I’m willing enough, I could remove it with a socket if I remove the wheel first. I will probably have to remove the wheel, anyway, considering that the tires are likely a decade or more old. I decided that I’ll get back to that at a later date.

Out back, I popped open the seat and looked into the oil injection system’s tank and the fuel tank for the first time.

The oil injection system is completely dry. I expected that, since the last service record noted that the system was inoperable.

Sadly, the tank doesn’t look as clean. There appears to be a mix of rust and varnished fuel in here. But the metal seems to be solid, so this might just be a case of cleaning all of that crap out of there. 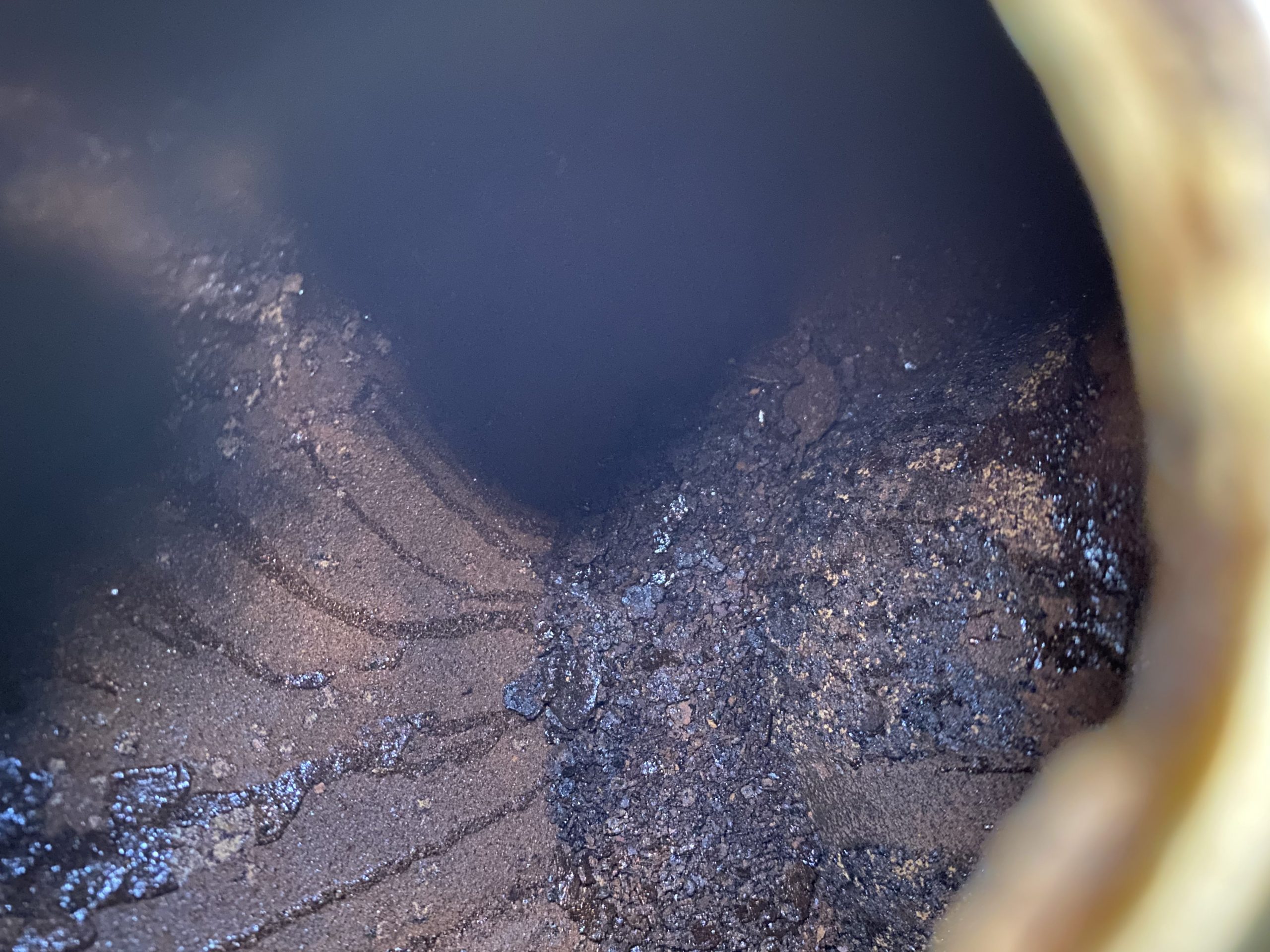 My plan for this is to remove the tank, tape it up, then fill it with vinegar and metal bb pellets. Then I’ll give it a good shaking. A part of me is thinking to just tie to something that turns and just let it rip for a few hours. I’m taking suggestions here on what to do. I’ve never actually removed this kind of stuff from a tank before. Usually I just covered it up with fuel filters. But I want to do this right.

Since I was already there, I removed the side covers. I have fresh ones waiting at home in the correct color.

Back at home base, I decided to first tackle the carburetor by giving it a cleaning. To start, I disassembled a carb for maybe the third time in my life. 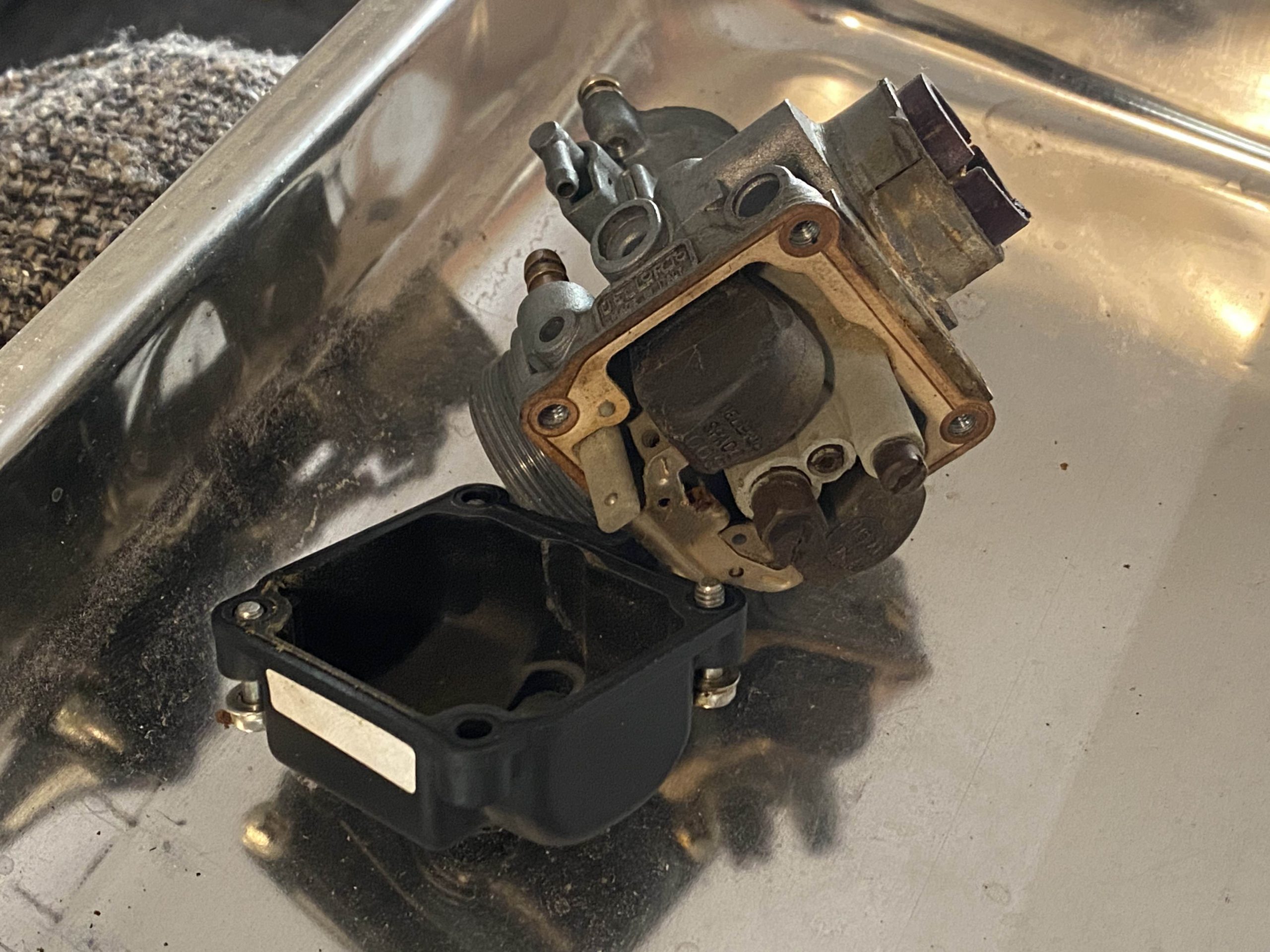 The floats were stuck and old fuel coated the whole thing. Each jet was definitely plugged. But thankfully, it wasn’t nearly as bad as the gas tank.

I don’t have any carburetor cleaner on me, but I do have a gallon of pure acetone for some reason. So I took my fiancée’s unused coffee mug, filled it with acetone, then dropped the carburetor into it. 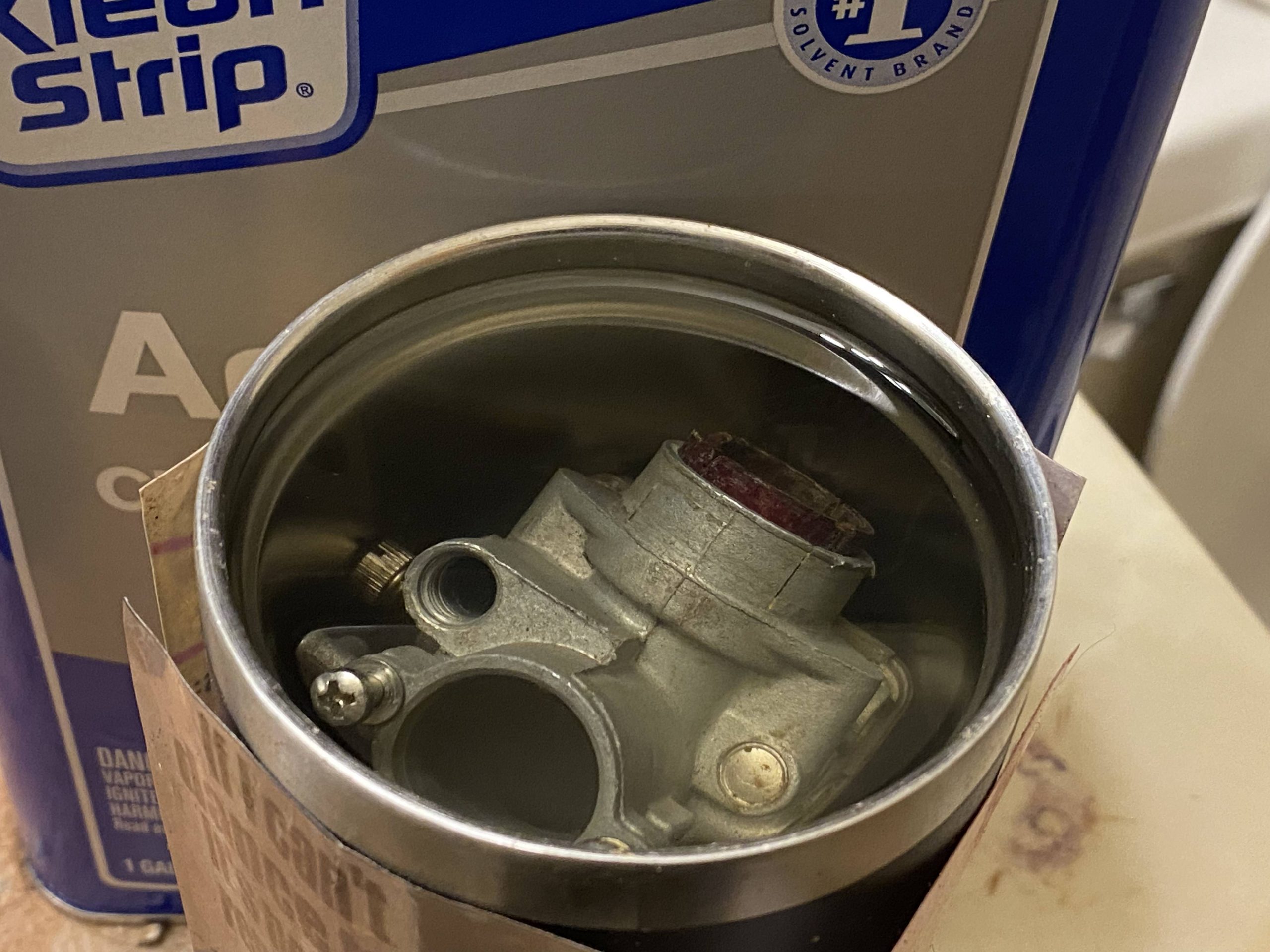 [Sheryl’s Note: Oh, well I guess I don’t have a mug anymore.]

I’ve read that using acetone is a good way to clean a carburetor. Using acetone overnight will supposedly even remove the tarnish!

Well, after a night of cooking in acetone the tarnish wasn’t gone. But the acetone did break down the hardened fuel. The jets are now freed up and the float now works. The jets look no different than when they went in, but they’re no longer clogged! 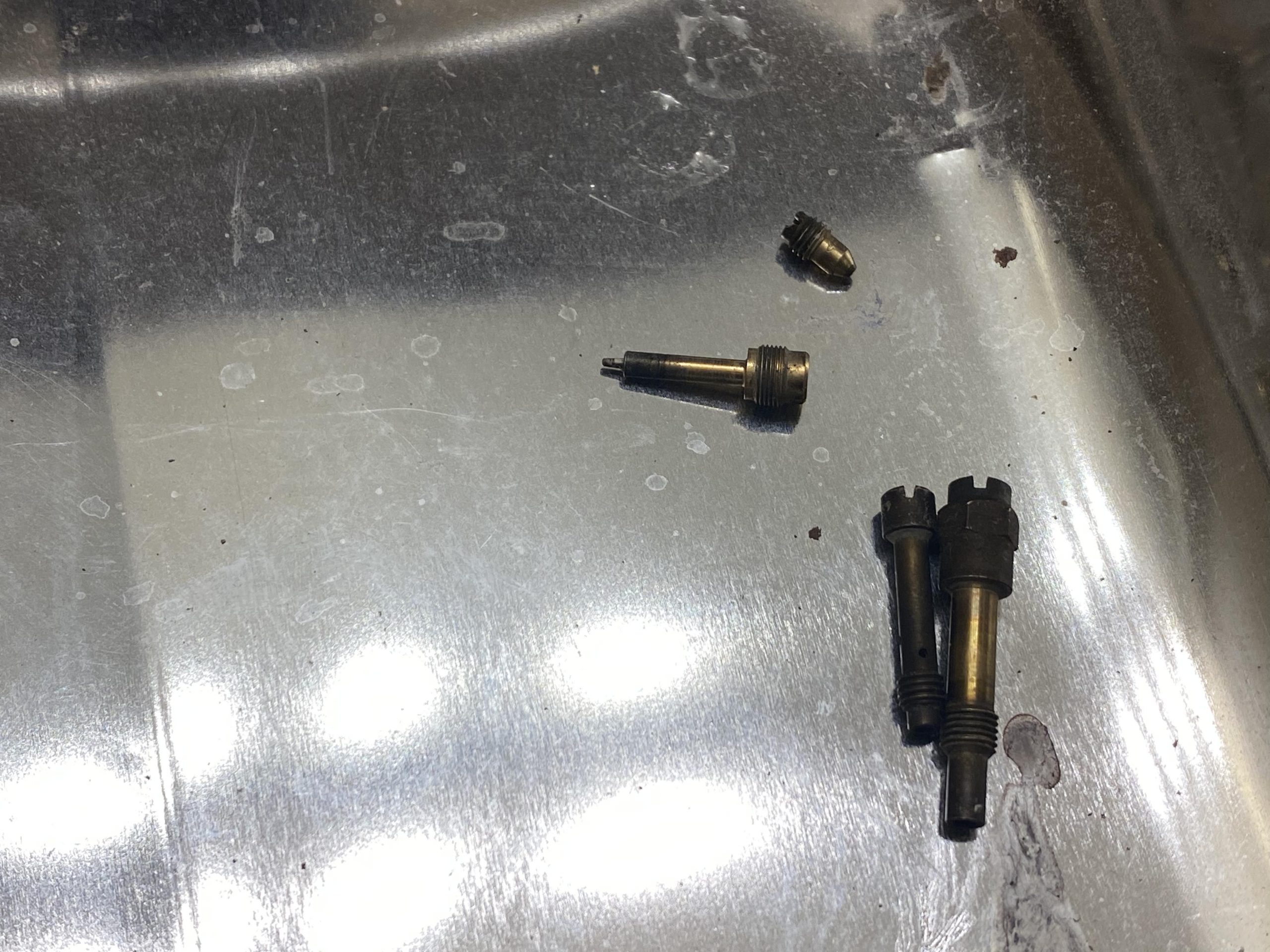 And the leftover ruined fuel was removed with just a hint of a scrubbing. I’ll probably end up buying a jet kit (or maybe a whole new carb) at some point, but I’m happy with the result. I put the carb back into the acetone bath to see what letting it stay in a little longer will do.

Oh, one more thing. The leg shield looks to be in pretty good condition. Check this out: 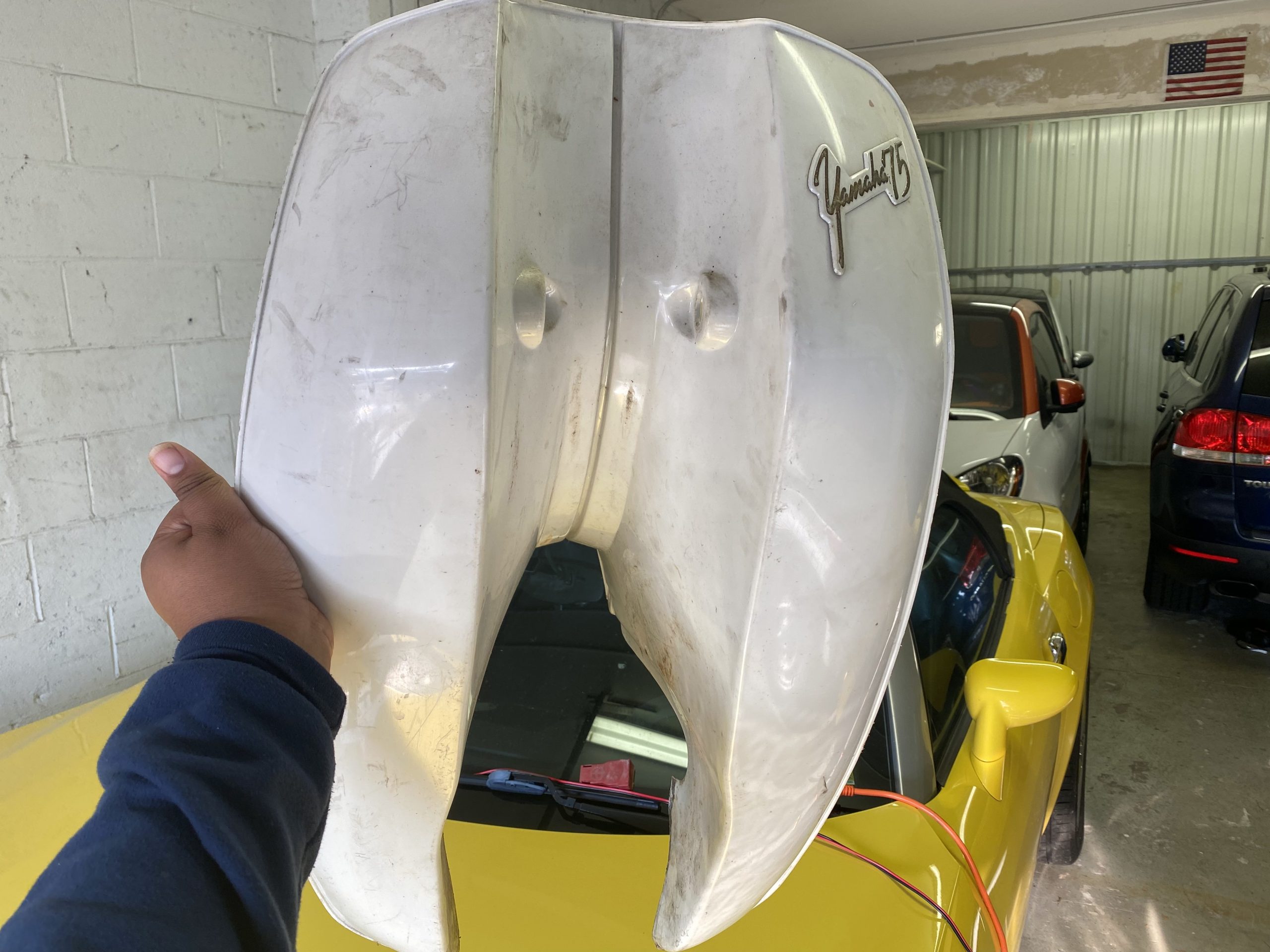 But I don’t like how the mounts for it look. I have an idea to fix this using resin…maybe? I’m not sure how to go about this. Maybe use some fender washers then send it? No, there has to be a way to reinforce this.

I’m also looking for ideas for this, too. 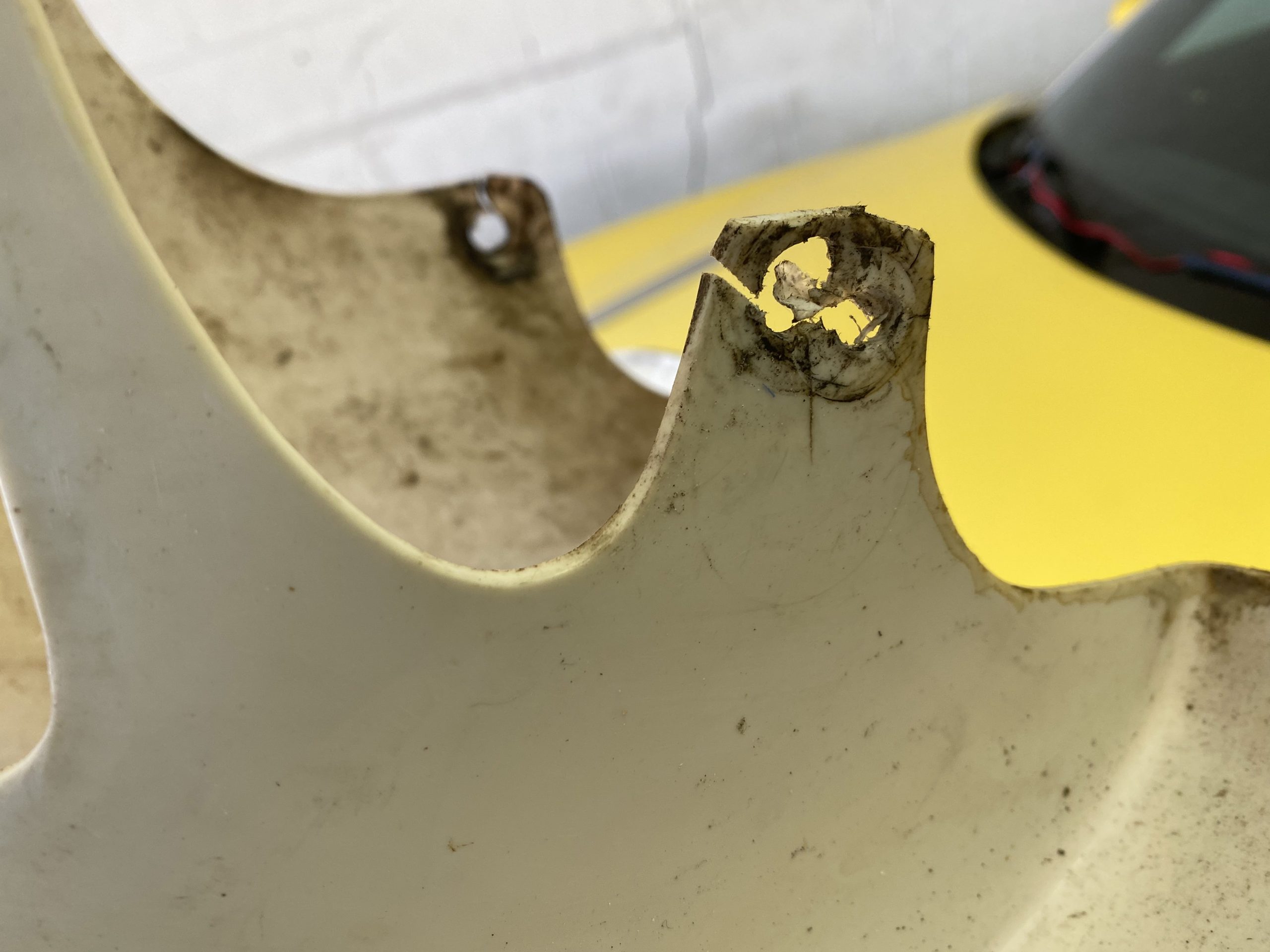 Next week, I plan to tackle the fuel tank. Then, with luck, I’ll put some fuel in it and maybe, just maybe, it’ll fire for us. Will this motorcycle sing for the first time in over eight years? I sure hope it will!

(All photo credits to the author.)

Mercedes is a lifelong fan of all things powered by an engine. When she isn't driving one of her five Smart Fortwos or her 14 other vehicles she could be found in the cockpit of a Cessna 172 or perhaps swimming in any body of water that she could find. She also has a deep love for buses of all kinds. Please send her buses. mercedes@theautopian.com Instagram: @mistymotors Twitter: @Miss_Mercedes30 Facebook.com/neonspinnazz
Read All My Posts »
PrevPreviousAMC Javelin, GM New Look, Caproni NSU Max: Mercedes’ Marketplace Madness
NextAutomotive Would You Rather: Eternally Damp Seats Or Magic Box Of Crap EditionNext