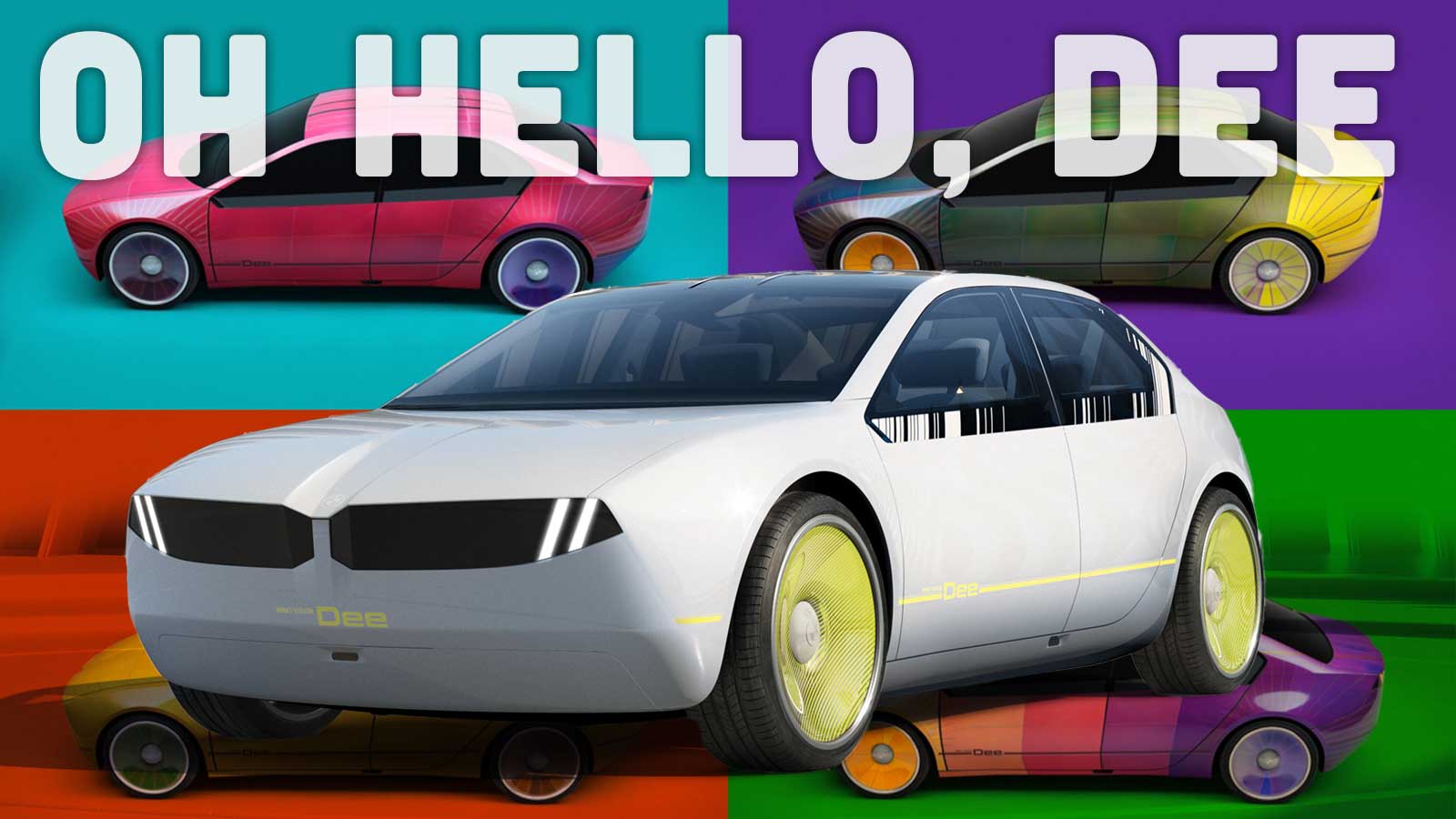 Remember a few weeks ago when BMW pretended their social media accounts were hacked by some AI named Dee and it was all kind of embarrassing for everyone? Hopefully, you don’t, because you have a rich inner life and you don’t need to dwell on such frippery. I remember, though. Well, the good news is that this “Dee” isn’t just some new AI assistant voice, it was teasing a concept car. A concept car that was just shown at CES, and while it’s kind of laden with eye-rolling virtual reality bullshit, the truth is that under all of that crap is a really appealing-looking EV that feels fresh and modern and still maintains some key BMW identity. Plus, those color-changing e-ink exterior panels are pretty damn cool. Let’s take a look at this thing.

BMW clearly thinks this is a big deal, as they spent a whole mess of money hiring Arnold Schwarzenegger and renting KITT (I imagine they threw in David Hasslelhoff for free) for an overly-long video they had made to show off the car via some kind of convoluted reminiscing of 1980s romantic movie tropes, or something. Here, you can watch if you really want:

Sure, it’s fun to hear the word “bullshit” multiple times in an official BMW video, because deep down I’m still a child, but there’s a lot of trying very hard going on there that sort of clouds the important stuff: this is a new electric concept with a very modern, distilled-down sort of styling based on the key traits of the iconic BMW Neue Klasse cars; the car has 240 e-ink panels that permit the exterior color of the car to change to any one of 32 colors (that’s twice as many colors as a Commodore 64 had) as well as being able to make patterns like stripes; and the car’s windshield incorporates a full-window display area that can display instruments as well as some kind of VR worlds crap no one will ever use.

I should also note that, a little confusingly, it appears that another sentient car, the accomplished racing 1963 Volkswagen Beetle known as Herbie, showed up onstage with Dee and KITT, though was absent from the video: 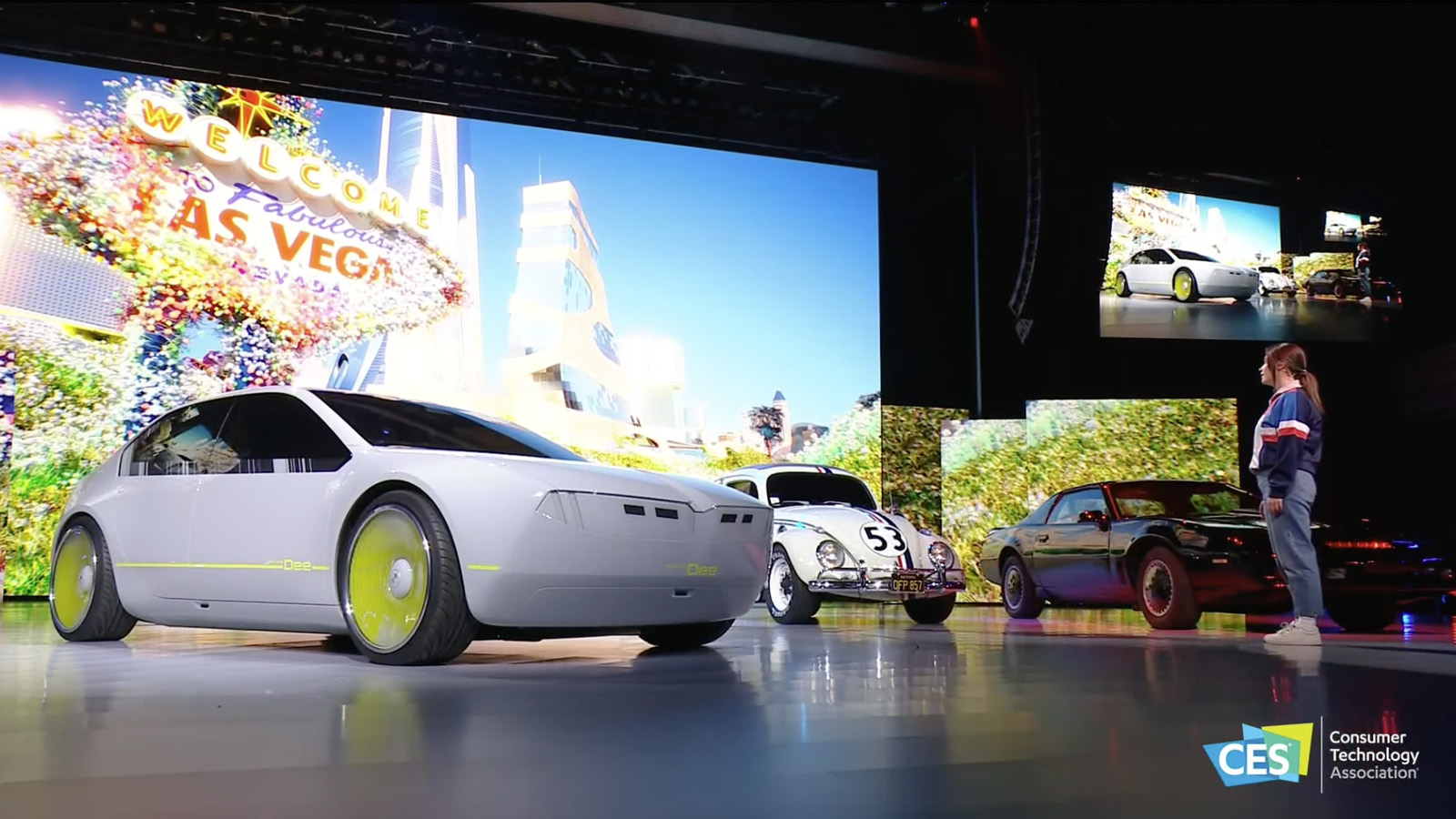 Seriously, Hasselhoff got an active part and Herbie didn’t? That’s another good reason to use the word “bullshit.” 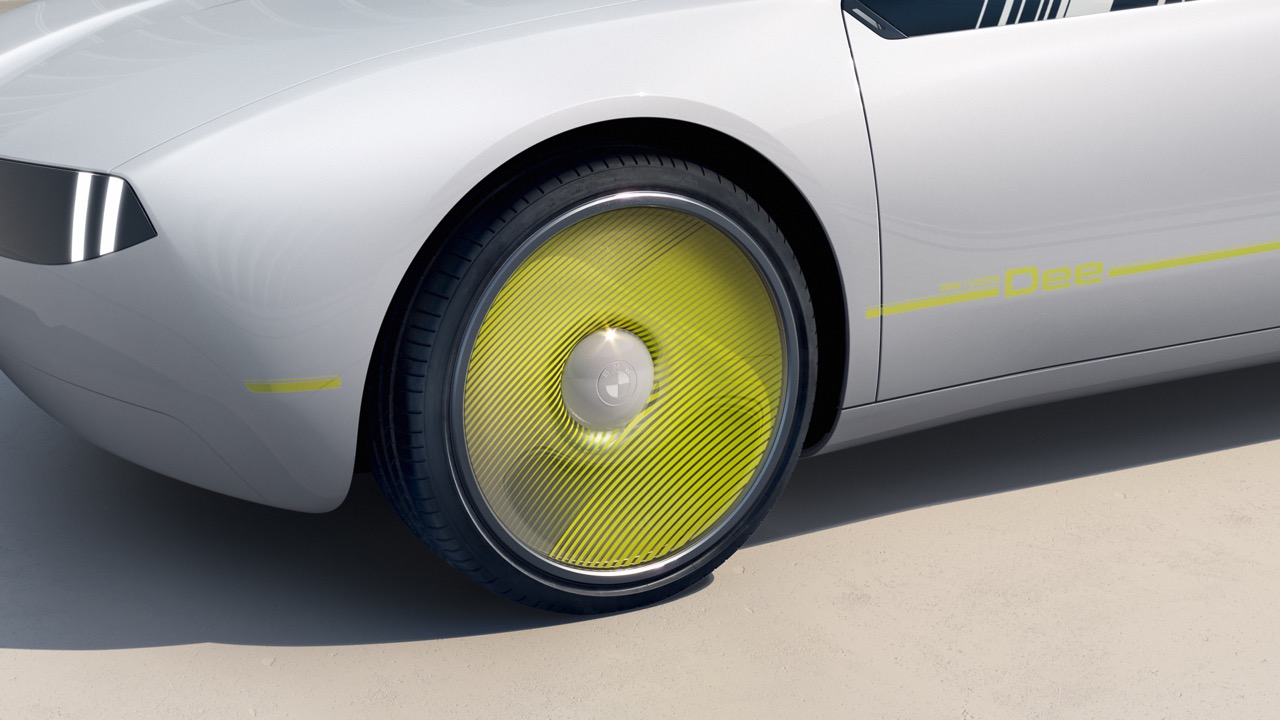 Whatever. Let’s look at the styling of this concept, because it likely – hopefully – hints at the design direction BMW will be taking in the near future. The most notable thing about it is how, well, car-like it is. It’s a simplified, almost (but not quite) cartoonified vision of the classic BMW sports sedan shape. They’re not doing anything strange with the proportions, they’ve minimized the detail which leaves the details they are incorporating, like the Hofmeister kink on the rear side window and the wide BMW kidney not-grille room to have more presence and impact. 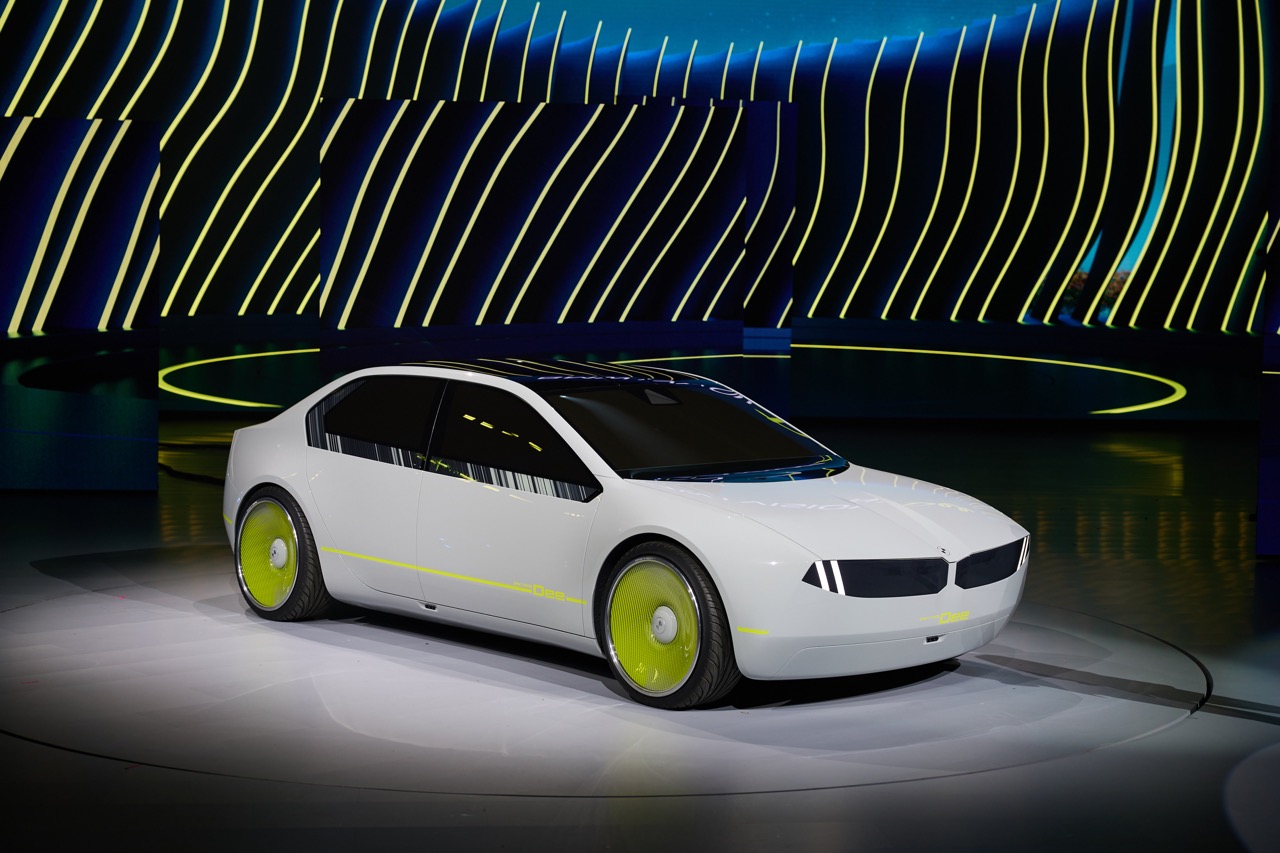 Personally, I think this approach started from someone outside of automotive design who tried his hand at automotive design almost 25 years ago: fashion/industrial designer Marc Newson’s concept car for Ford, the 021C: 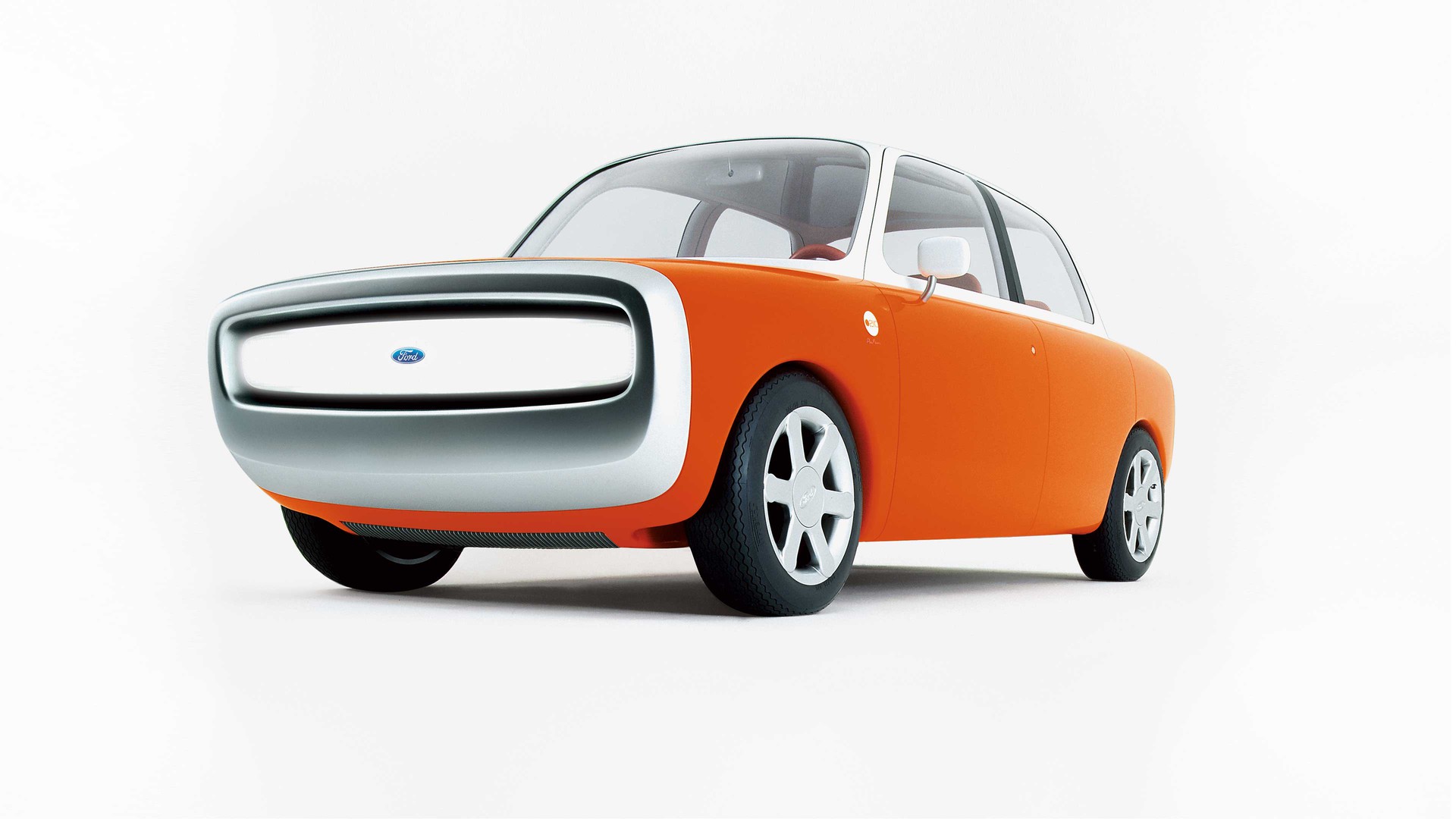 The Dee’s look feels like it’s inspired by the general concepts of simplification and almost turning the car into something close to a symbol of itself, if that makes sense. Newsom’s ideas never entirely made it to production, mainstream auto design, but perhaps BMW will be giving this approach a chance in the near future. They should, because I think it works. 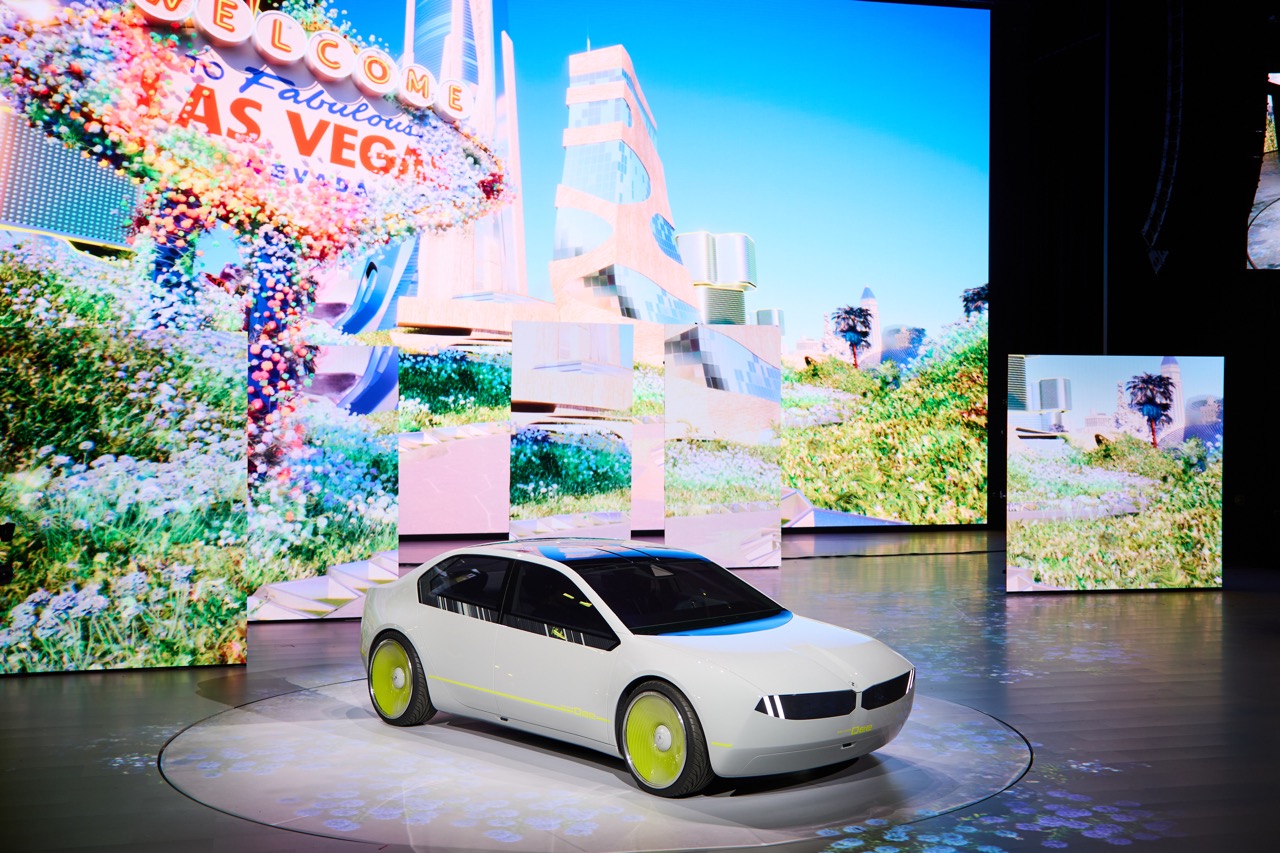 All of the non-body panels like the windows and the not-grille area appear to be displays of some sort. This allows the front and rear lighting panels to change color and looks, and also seems to allow you to display fake people on the side windows: 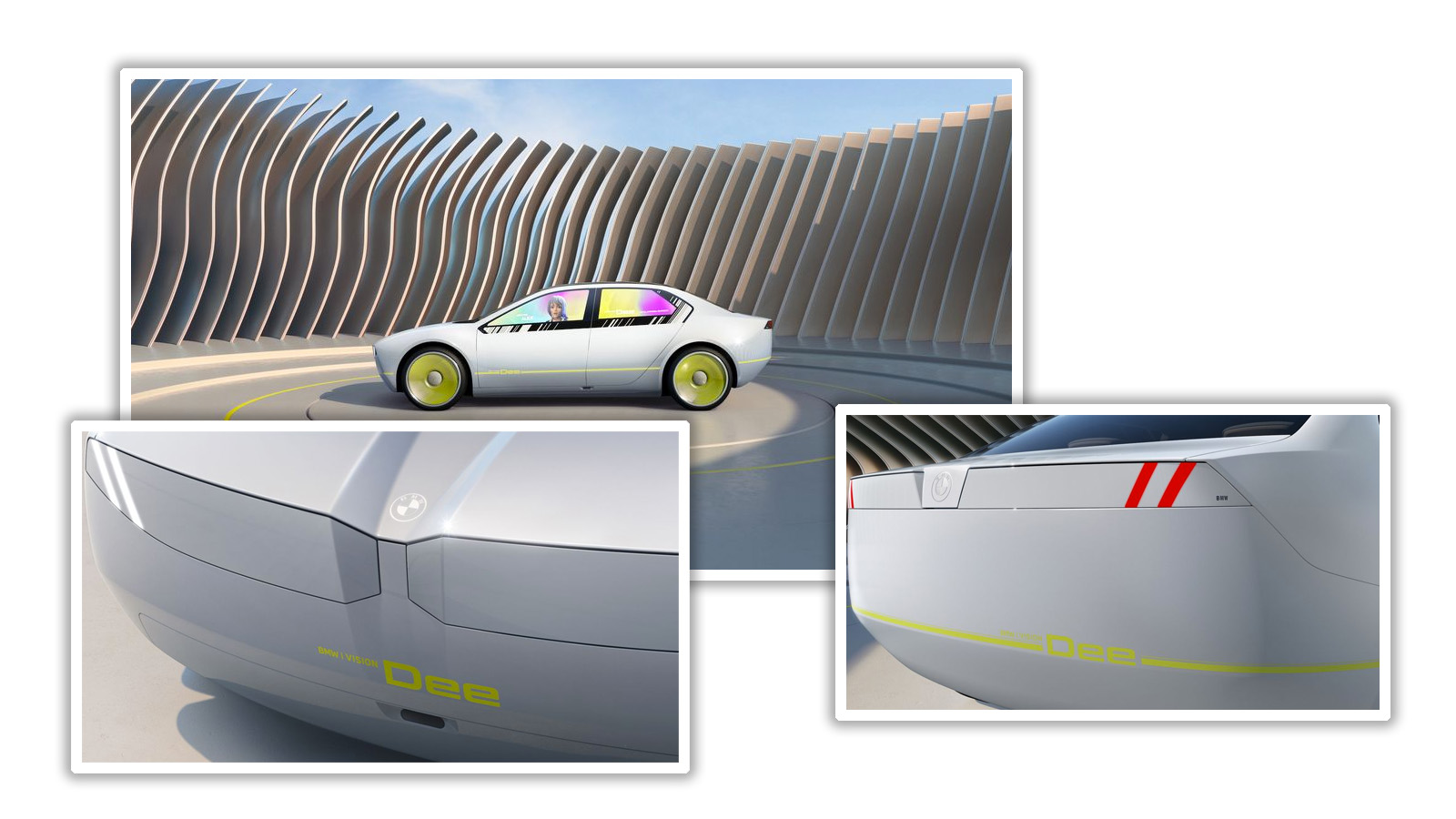 Is this something people want? Maybe for privacy? I’m assuming that these displays still keep the windows transparent from the inside, otherwise this is a complete non-starter. Here’s how BMW describes it:

Welcome scenario with voice and phygital icons
The digital experience already begins outside the vehicle, with a personalised welcome scenario that combines graphical elements, light and sound effects. Natural language serves as the simplest, most intuitive form of interaction, enabling perfect understanding between humans and their vehicles. The headlights and the closed BMW kidney grille also form a common phygital (fusion of physical and digital) icon on a uniform surface, allowing the vehicle to produce different facial expressions. This means BMW i Vision Dee can talk to people and, at the same time, express moods such as joy, astonishment or approval visually. BMW i Vision Dee can also project an image of the driver’s avatar onto the side window to further personalise the welcome scenario.

There could be some application of this stuff as enhancements to a car’s current visual communication systems, turn signals and taillights. Because as you know, it’s currently difficult to express joy via your turn signals. But not impossible.

I’m not expecting the exterior display windows to make it to production, but those e-ink body panels that let you change the car’s color are genuinely cool, and it would be exciting to see that on a production vehicle, because, well, just look at it: 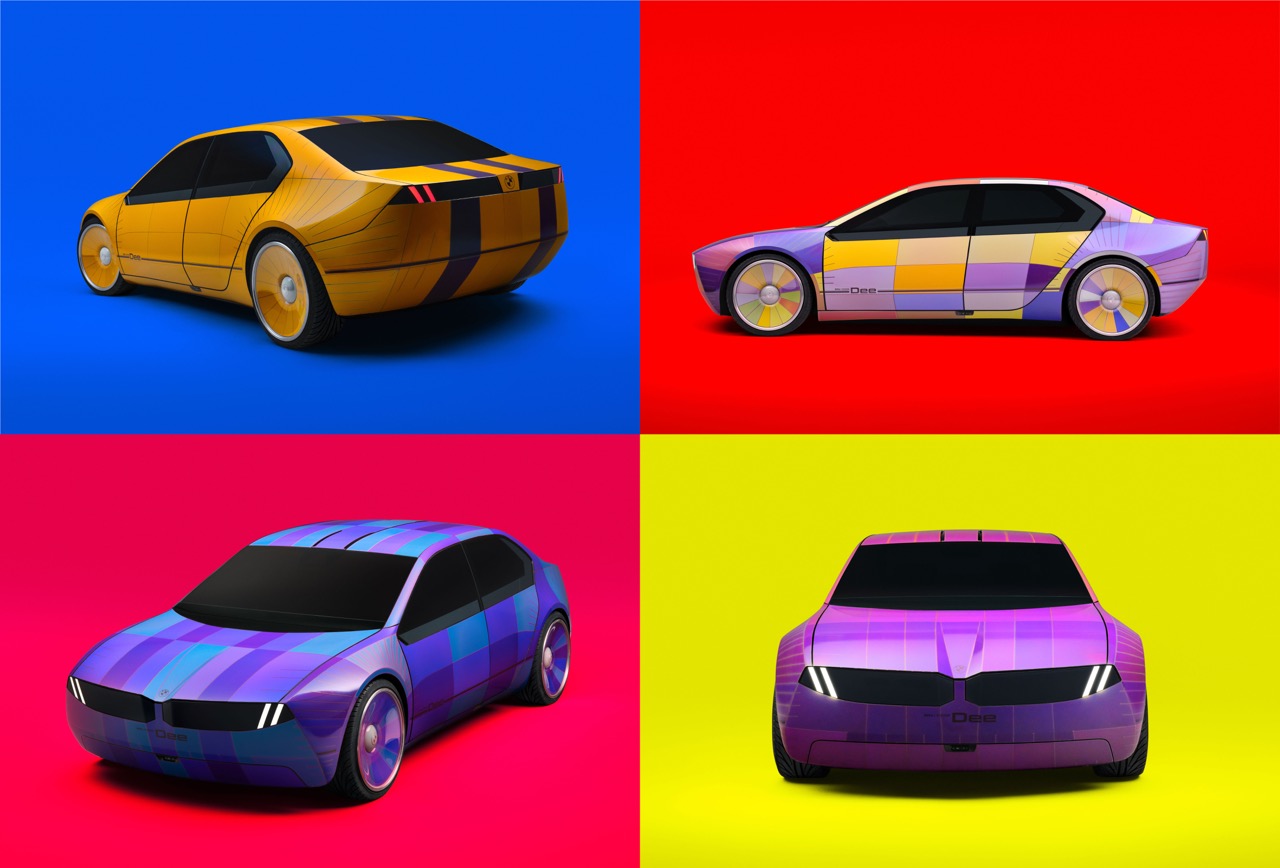 I mean, hot damn, that’s fun. It’s so much fun that I can almost make myself not think about how a minor scrape against an underground parking lot column would be bankruptingly expensive, even, or how a fender bender repair would jack up your insurance premiums to where you were just growing a new kidney every month to give to the insurance company. It’s a concept, though! And that’s not the time to worry about stupid reality.

Speaking of stupid reality, BMW showed that the car has multiple settings that seem to let you dilute your reality experience by mixing it with the virtual kind. From their press release:

BMW Mixed Reality Slider: into the virtual world in five steps
The BMW Mixed Reality Slider, in combination with the advanced Head-up Display, is the digital highlight and central operating control of BMW i Vision Dee. Using shy-tech sensors on the instrument panel, drivers can decide for themselves how much digital content they want to see on the advanced Head-Up Display. The five-step selection ranges from analogue, to driving-related information, to the contents of the communications system, to augmented-reality projection, right up to entry into virtual worlds. In parallel, dimmable windows can also be used to gradually fade out reality. Mixed reality can be experienced in BMW i Vision Dee in an immersive way that engages different senses without requiring any additional tools, creating a new dimension of driving pleasure for the user.

Now, at first glance, this seems like a terrible idea. Upon reading further, though, I think most of you will agree that maybe that wasn’t a fair assessment: it’s idiotic. Like, what the hell is “shy-tech?” And I guess mixing in augmented reality could be useful for things like overlaying warnings or arrows for driving directions, sure. Okay, maybe they mean stuff like that, and just weren’t really saying it? But do we really want to “fade out reality?” Isn’t that kind of nihilistic and grim? It sounds like a euphemism for assisted suicide. 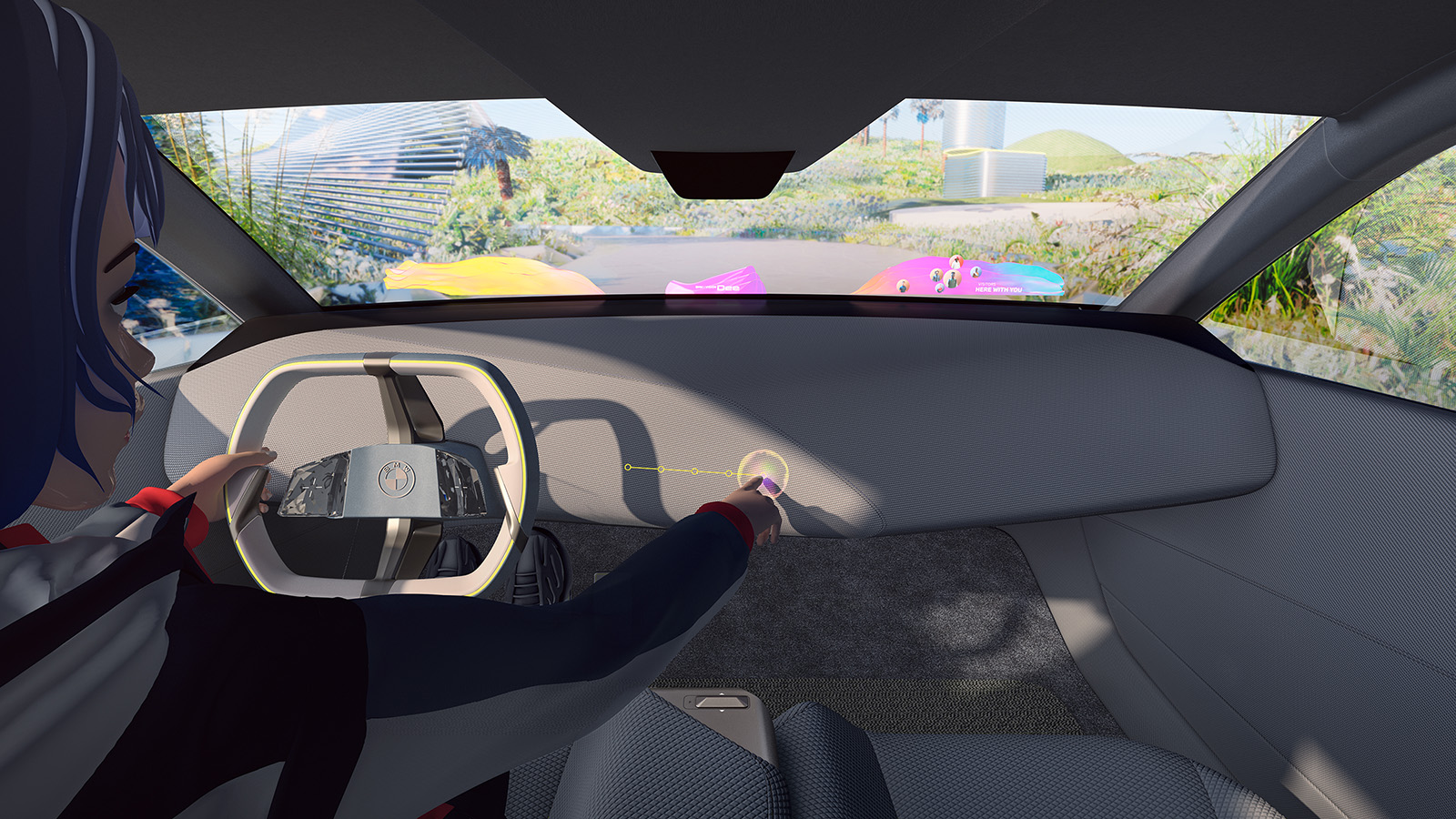 And, the way they’re showing the “entry into virtual worlds” it appears that all of the windows become screens to show some kind of VR world like Second Life or whatever the hell that Meta thing is, only you’re in your car, which makes no damn sense. Just stay at home and put on one of those VR headsets, that way you don’t even need to put on pants. All of this is just CES show car goofballery, anyway.

Window-displays aside, the interior looks pretty appealing. It’s minimalistic, but not cold, as everything seems upholstered and padded, and up front while it’s not quite a bench seat, the seats do join via a padded armrest and aren’t separated by a big console, so some light affectionate physical contact seems possible, and anyone who tells you that they don’t need more of that in their lives is lying to you. 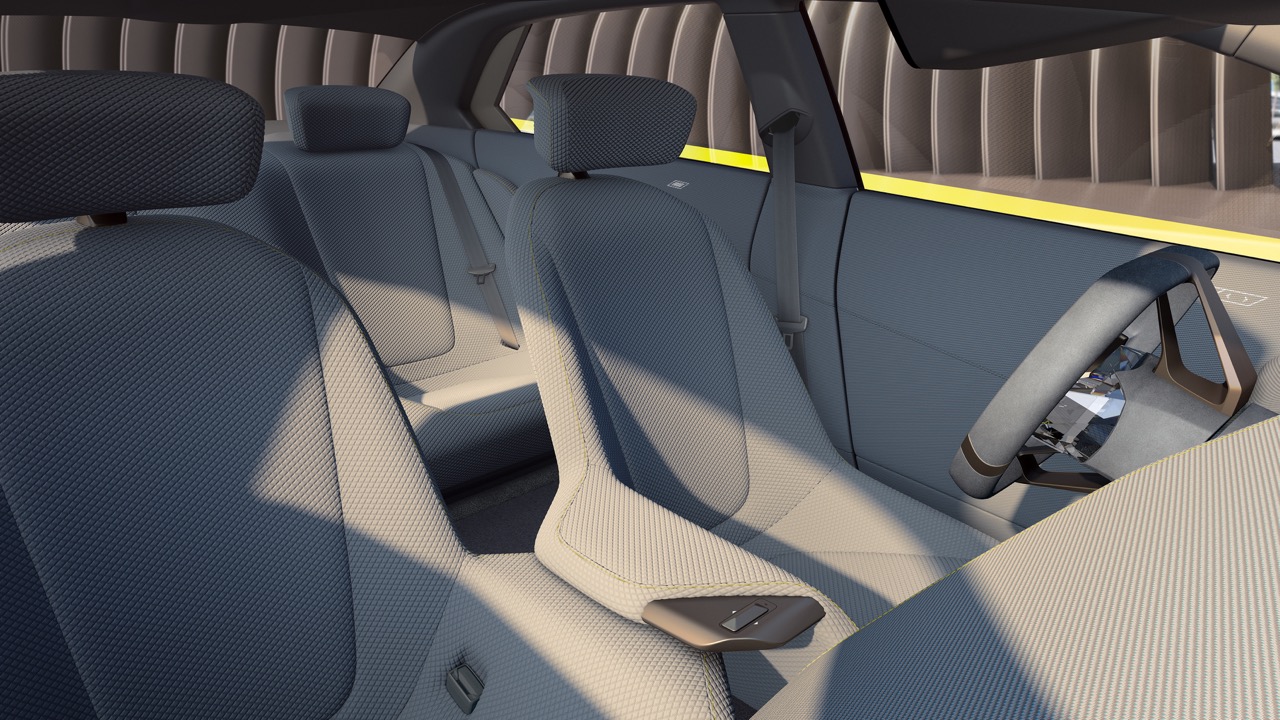 In back, the rear seat wraps around into the sides of the car, which looks cozy and comfortable. This looks like a highly nappable environment: 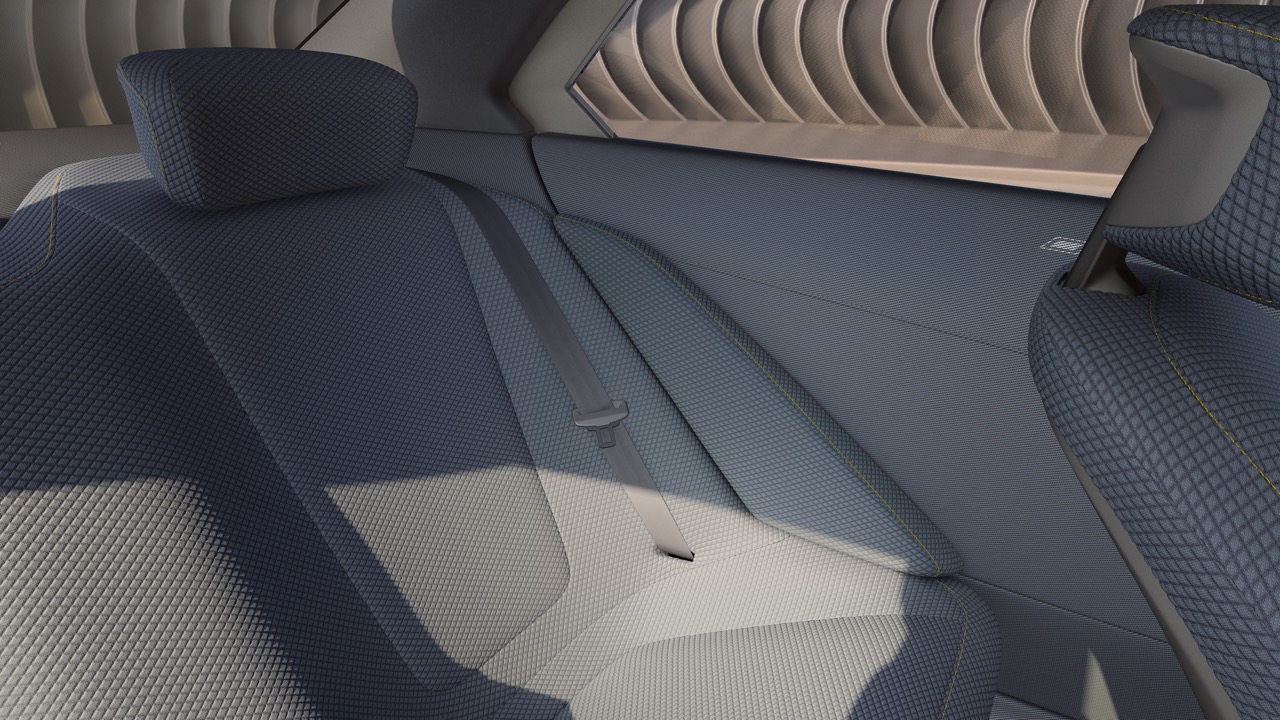 Overall, if we filter out the silly VR crap and just look at what BMW is really showing here: an EV with a potentially great, clean, distinctive design and some novel tech features, then I think we can feel pretty good about a future with Dee, as long as she knows when to, you know, back off a little bit.

Let’s see what this evolves into in our actual reality which, I’m happy to say, we can’t yet fade out. I mean without drugs, at least.

Update: Jeezis, how did I miss “phygital?” Not only is it cloying and eye-rolly, it actually sounds like you’re trying to vomit up a condom full of MDMA you swallowed before getting on your flight. Oy.

I'm a co-founder of the Autopian, the site you're on RIGHT NOW! I'm here to talk to you about taillights until you cry and beg me to stop, which I absolutely will not. Sorry. Hug? Also, David's friend.
Read All My Posts »
PrevPreviousSony Honda Mobility’s Afeela Prototype Is A Delightfully Minimalist Posh Electric Sedan
NextThe Place Where Brown Comes From: Cold StartNext