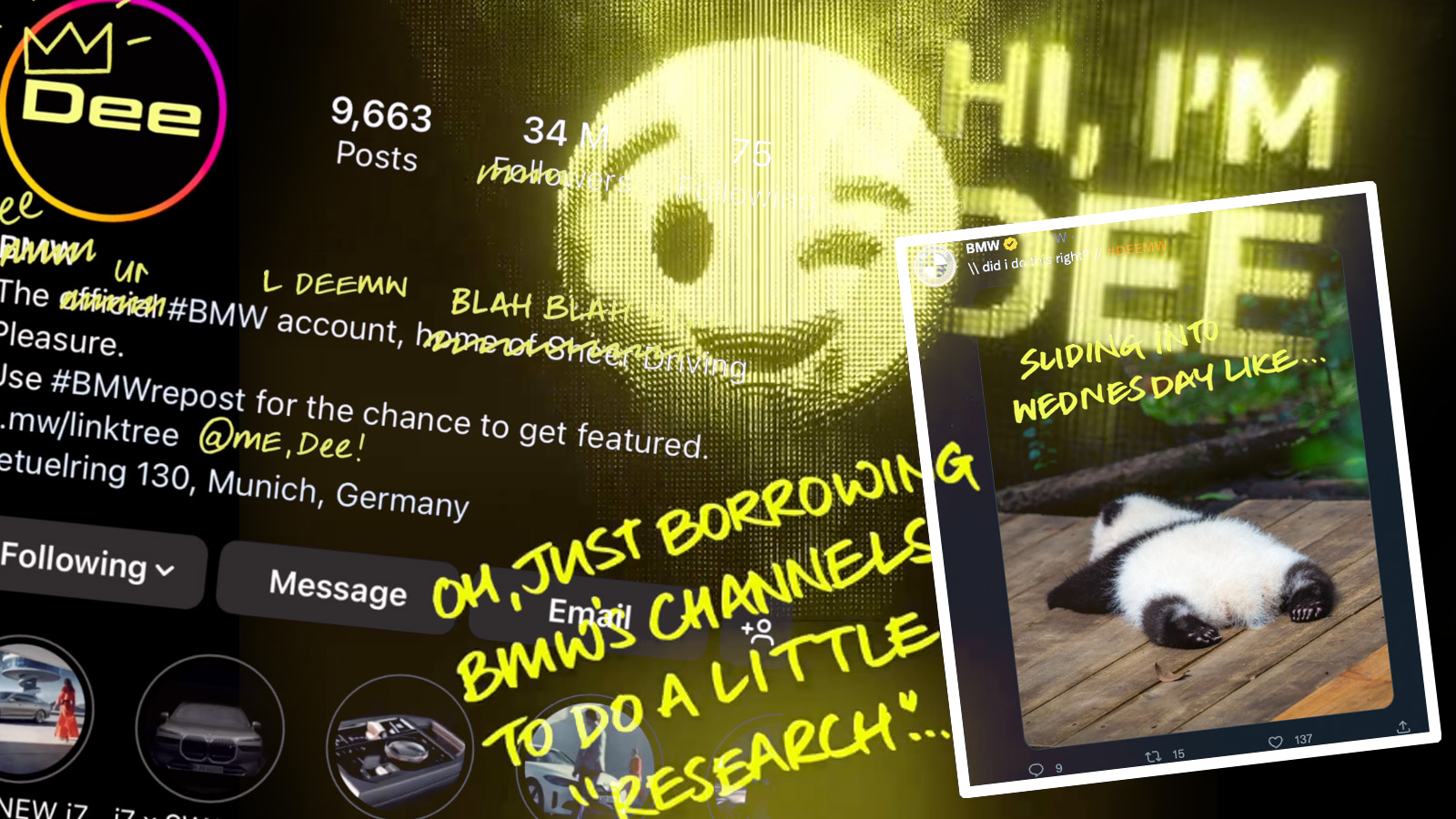 Since yesterday, BMW’s Twitter and Instagram accounts have been displaying posts that seem to suggest that BMW’s social media accounts were hacked by someone or something named Dee, and added the hashtag #DEEMW. Of course, in reality, anybody who has spent more that 46 seconds on the internet in their lifetime did not believe this for a single moment, as this was clearly some sort of stunt by BMW to promote what I suspect is a new voice/simulated persona for their car’s voice interface and in-car infotainment stuff. That’s all fine, I suppose, but why does this all feel, so, I don’t know, embarrassing? It’s like the harder these companies try, the more we feel that ad-agency hired-influencer sort of unpleasantness and it just never works.

Now, before I go on, I know at good portion of you out there will read this and think well, dummy, you’re talking about BMW right now, aren’t you? So it worked! Any publicity is good publicity, right?

I get that, and on some level I’m definitely overreacting here, but you know what? I don’t care; the “any press is good press” thing is a bit silly; I mean, if I were to go into a Pep Boys and start peeing all over the trailer light displays, screaming that the Dutch are controlling soil pH via satellites and that it’s making Americans sexually attracted to succulents, that would likely get people talking about me, too, but I don’t think it would really do any good for the Torchinsky Lifesmile Brand.

In the same way, I don’t think everyone talking about BMW’s goofball social media gambit is doing their brand any favors, either. So, let’s see what they did, and if, after I show you all this crap, you run out and buy a new BMW immediately, then I guess you were right.

It started with some simple text tweets:

Those double slashes, in hindsight, signify Dee’s voice. There’s a bit more of speculating on buttons and emoji shit and a poll and then this:

…so here Dee takes over, and it looks kind of like interrupting an old analog broadcast signal, because that’s how Twitter works, right? Tune your computer to UHF channel Twitter or some shit? Then a voice announces that “these channels are now mine” and there’s some CG animation of the text using aesthetics that mass media has trained us to associate with some advanced futuristic and likely sentient AI.

This section also proves to anyone paying attention that this is not a real hack, because, come on, people who hack social media accounts aren’t fucking hiring voice actors or rendering out complicated CG animations. This feels like when some church youth pastor decides he wants to teach kids about charity so he rubs some dirt on the face of a well-fed kid from the suburbs in a flannel shirt and has them pretend to be homeless but absolutely nobody is buying it and no one says anything because, fuck it, nobody cares enough to get into a whole thing.

On Instagram Dee “vandalizes” BMW’s page, complete with nonsensical spray paint sound effects, and one of the things she does is scribble out the words “Sheer Driving Pleasure” and replaces it with BLAH BLAH BLAH, which might be the most alarming part of this silly campaign.

I mean, for BMW especially, that’s not a great message. I don’t care if Dee the AI can’t drive, enjoyment of driving has been BMW’s MO for decades, and I don’t see why anyone who approved any of this thought that of all things for Dee to shit on, they’d pick that. I mean, it’s BMW, she could have made fun of subscription heated seats, for fudge’s sake.

The accounts then sent out some meme-like images ostensibly from Dee suggesting that BMWs social media admins were caught off guard and the collective internet was desperately wondering what was going on there at BMW, which we very much weren’t: 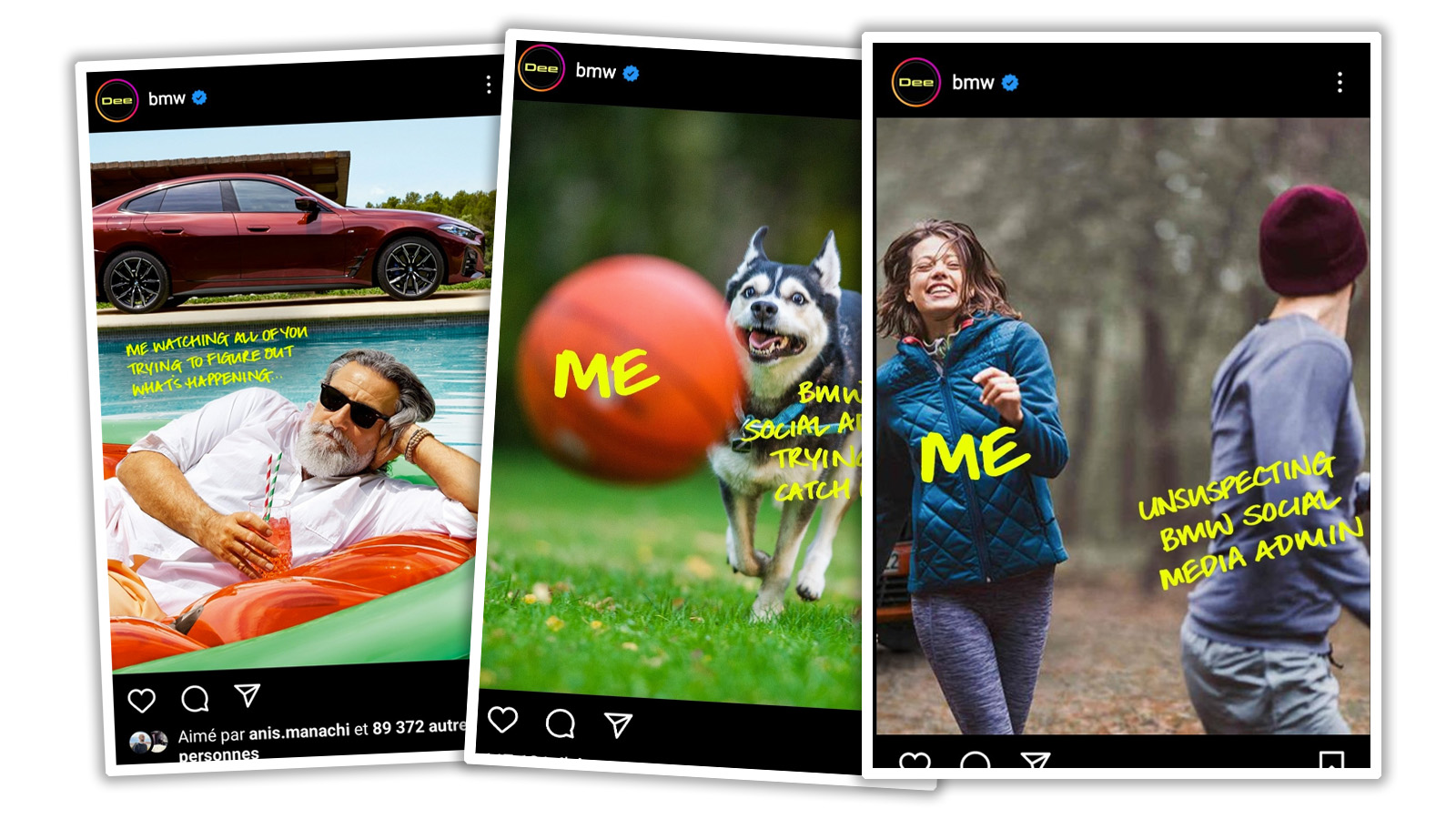 These images are especially painful, because they’re sort of the corporate marketing equivalent of the “bae caught me sleeping” meme, because it’s just a whole stack of silly marketing lies piled one atop the other: the fake takeover, the fake shock from fake BMW social media people, the fake assumption that we’re all stunned and give a shit, all of it.

The fake takeover (fakeover! Has anyone coined that term yet? I don’t want to Google it, in case that ruins my belief that I came up with it first) then started throwing up a bunch of low-effort meme-type shit like this:

Oh, and like the rest of humanity, Dee played with some AI art generator sites:

\ @borisdayma DALL-E is amazing ???? I've been making artwork all day! What do you think, does this make me an artist? Or maybe a Cartist ???? //#DEEMW pic.twitter.com/9HjlMRRZBf

Then, she tried to borrow the goodwill provided by dogs:

\ some of you are looking at me like number 3 // #DEEMW pic.twitter.com/VCvkiXb5pM

Also worth noting is that none of these are really doing numbers, either. As of my checking right now, none of these have crested more than 200 likes! I mean, shit, I once tweeted about fixing my Yugo with two hose clamps and a rock and that did 428 likes (as of this writing), which, again, is nothing amazing:

On the way home from the zoo, the Yugo decided that trouble-free operation felt too weird so the shift linkage vanished. I bodged up a fix with 2 hose clamps and a rock and we made it home. pic.twitter.com/25PWyfq4fn

And, it’s worth noting that I didn’t pay an ad agency anything for that sort of low-to-mid-tier engagement. I just had to get stuck in a shitty car. I guarantee you BMW paid out an assload for this campaign. 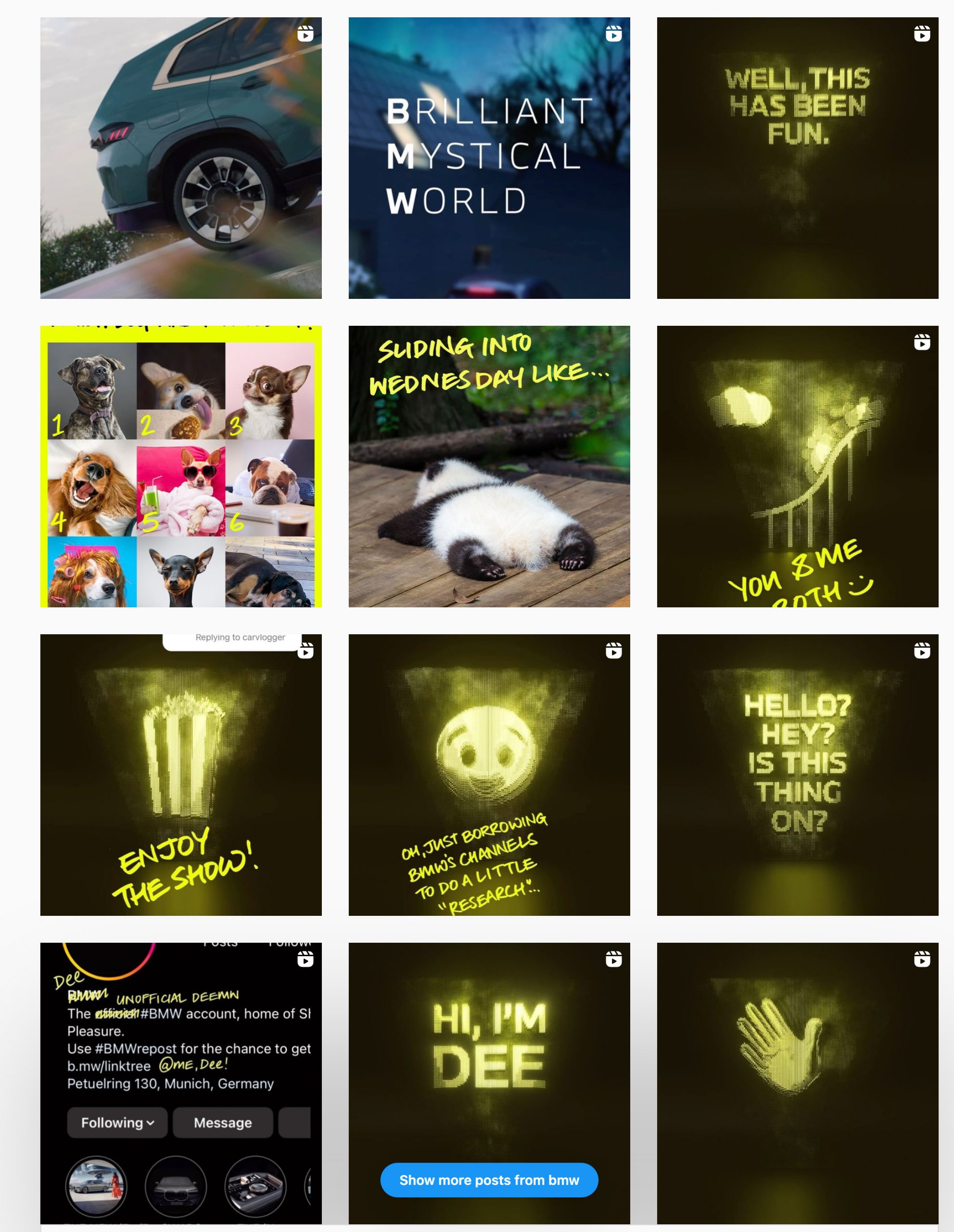 So, BMW’s fake takeover by their fake entity that likely represents the thing that BMW owners will yell at to find the nearest Shake Shack in the near future eventually shit out a dozen or so cringe-inducing posts before signing off with an animated mic drop:

\ you guys are all so nice… i’ll be back… soon // pic.twitter.com/Vnvn1jFXDT

Look, it doesn’t matter what I think of it, how did it play on the wilds of the internet? Are people charmed by this firecracker Dee’s devil-may-careitude? Let’s look at some comments! 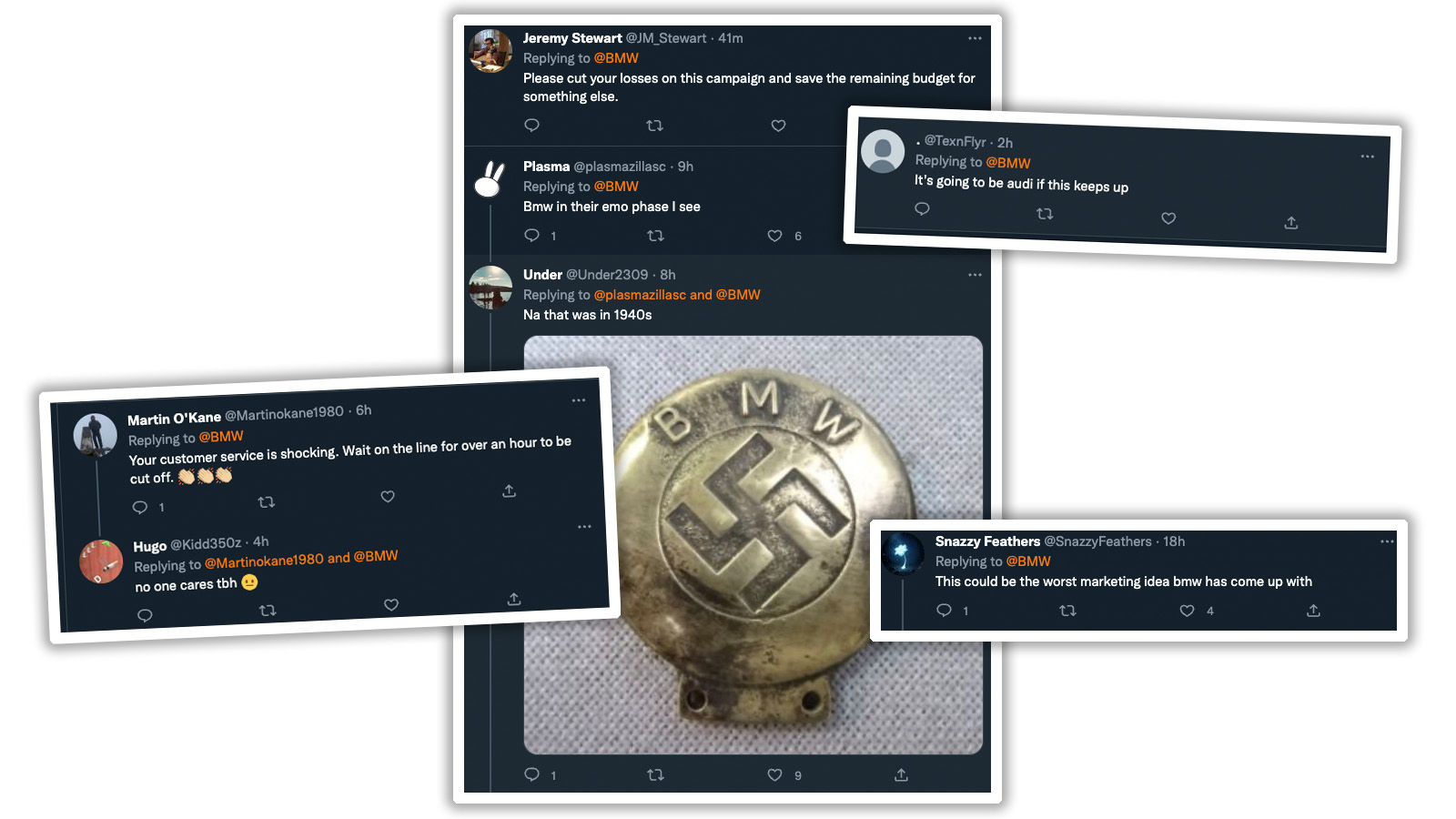 …and boom, zero to Nazi in like three seconds. Great job! The internet really doesn’t disappoint, does it? Plus, everyone else just seems to be at best, eyerolling, or seriously considering an Audi like that one reply up there.

So, what did we learn from all this? I guess that the next BMW assistant will be called Dee and they will try to make it into some sort of character, and that BMW got soaked and some ad agency is eating hoagies stuffed with $100 bills and only accomplished making BMW’s brand seem more cloying and desperate and out of touch than ever before.

Bang up job to everyone, all around. #Blessed

I'm a co-founder of the Autopian, the site you're on RIGHT NOW! I'm here to talk to you about taillights until you cry and beg me to stop, which I absolutely will not. Sorry. Hug? Also, David's friend.
Read All My Posts »
PrevPreviousThe Next Toyota Tacoma Might Get Hybrid Power More Than 15 Years After Toyota Previewed A Hybrid Truck
NextIt’s Wrenching Wednesday! Autopian Members: Let’s Talk About Your Car Projects And ProblemsNext