Things might get a whole lot more interesting for truck buyers waiting for Toyota to drop a new Tacoma. A new report from The Fast Lane Truck suggests that the next-generation Toyota Tacoma may be getting a little extra electrical assistance. Going off what an anonymous inside source has told The Fast Lane Truck, presenter Andre Smirnov says the next Tacoma will come with “Hybrid Max, which is their name for their hybrid system, which will combine the 2.4 turbo with the electric motors and four-wheel-drive.” This will sound familiar to Toyota fans, as top-spec Crown crossover sedans also use a turbocharged 2.4-liter four-cylinder engine paired with a hybrid system, albeit mounted transversely. Since you’d probably need to have fat stacks to afford such a sophisticated powertrain in an already pricey truck, base models are reportedly likely to be equipped with the turbo motor sans high-voltage electricity. 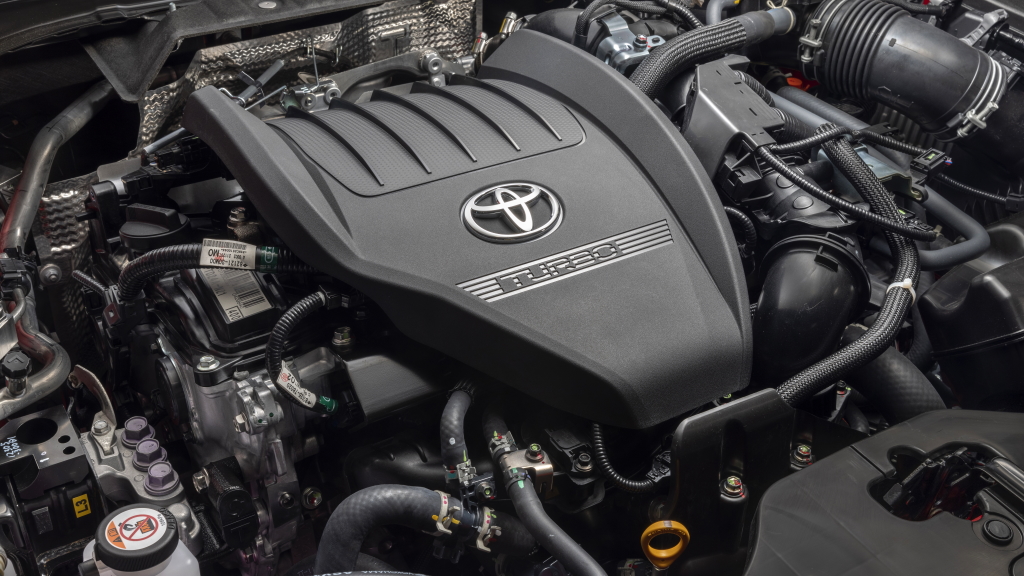 Is this report plausible? I don’t see why it wouldn’t be. Toyota is very proud of its hybrid drivetrains, and pretty much every model that isn’t performance-oriented is now available with some sort of electric assistance. Plus, the 3.5-liter V6 in the current Tacoma seems to be on its way out and Toyota seems to finally be hopping on the downsizing trend. The Sienna and Highlander have both ditched the six in favor of four-cylinder powertrains, while the Tundra and Sequoia have also downsized from V8s to boosted V6s. Add in the fact that we’re coming due for a new Camry, and there’s little indication that the 3.5-liter V6 will stick around in the Toyota lineup for more than a few years. 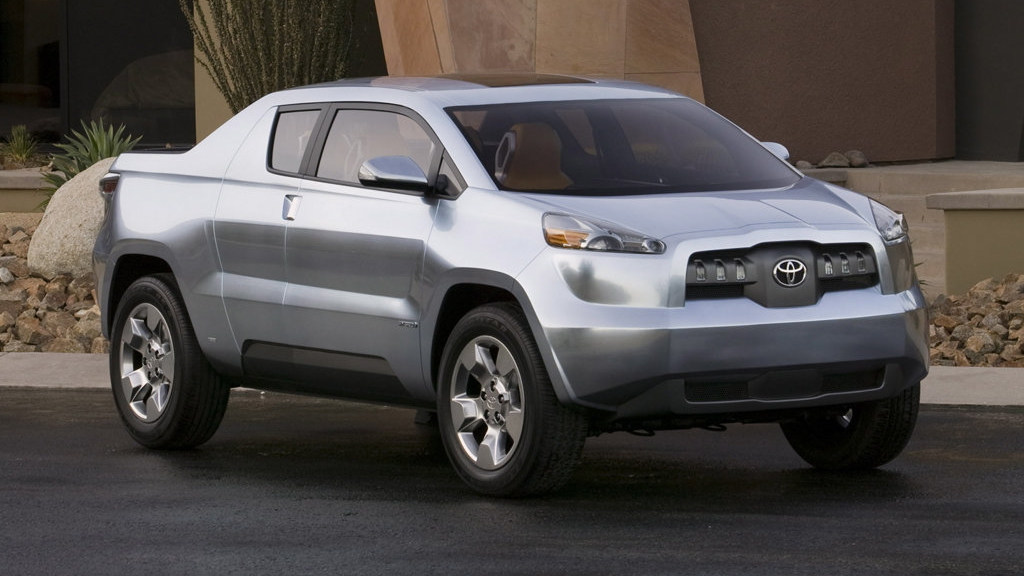 Also, Toyota previewed a hybrid pickup truck years ago. Let’s get our Frutiger Aero on and jump back to 2007, right before the economy took a proper dump. Around the same time that No One by Alicia Keys leapt to the top of the Billboard Hot 100, Toyota went green by showing off something called the A-BAT. It wasn’t a flying car, but rather an extended cab hybrid compact pickup truck that was oddly bulbous. After a warm reception, Toyota decided to do what pretty much every automaker did to concept cars during the financial crisis and shoved the A-BAT into a dark corner, never to do anything with the novel idea of a small hybrid truck. This would eventually bite the Japanese automaker in the taint, as the Ford Maverick compact hybrid pickup truck took the car-buying public by storm more than 13 years later. 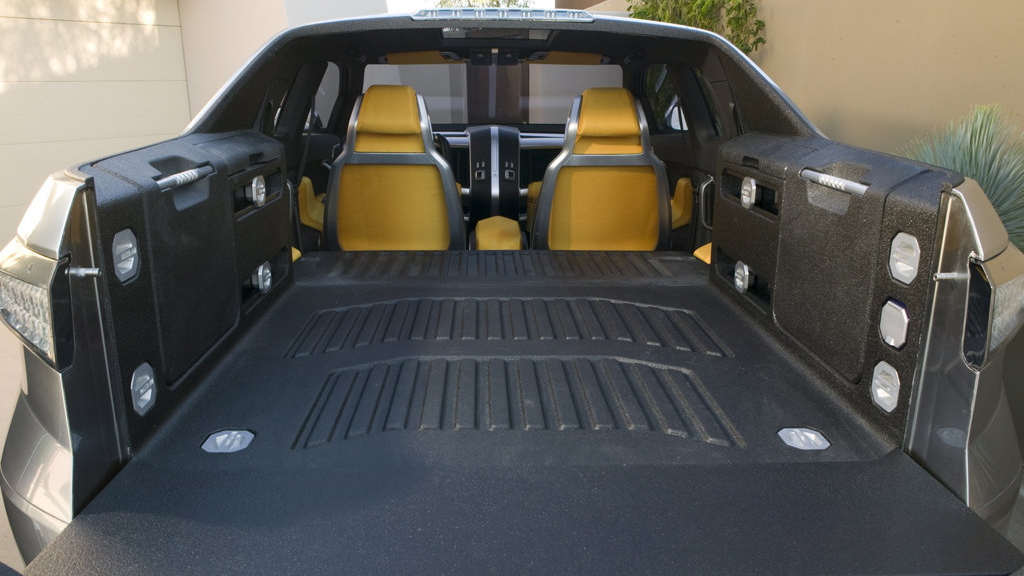 Seriously, just look at this thing. Isn’t it pretty damn cool? Sure, the styling hasn’t exactly aged like fine cheese, but the overall package still seems great. From suicide doors for easy access to the rear of the cab to that Chevrolet Avalanche-style folding panel that expands the bed to fit big things, the A-BAT really seems built for truck things. It even has a gear tray in the rear bumper that absolutely couldn’t exist on a production model yet still seems very pragmatic. 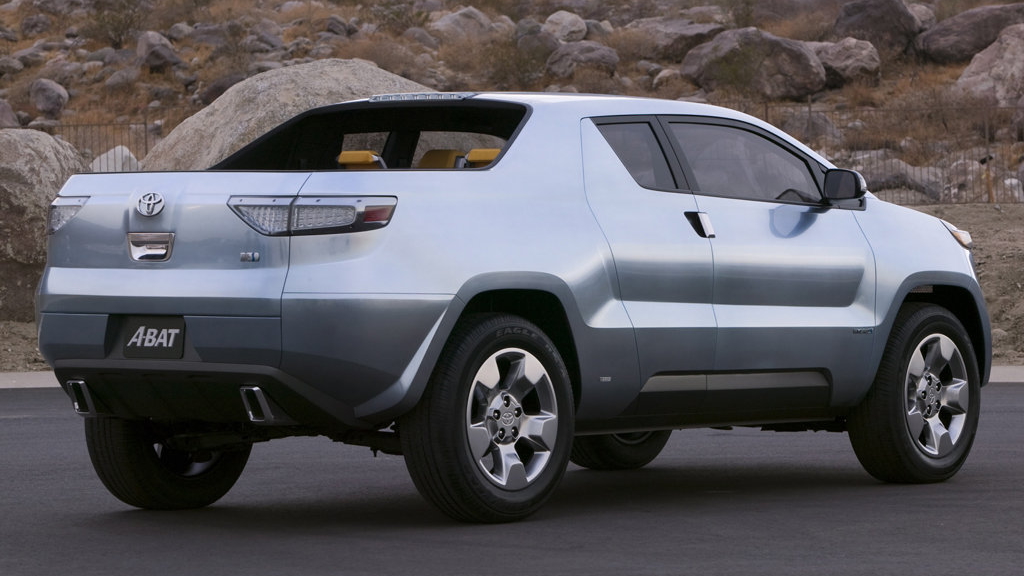 However, the intended series-parallel hybrid powertrain was even more spectacular than the packaging. Back in 2007, choices for hybrid pickup trucks were pretty slim. Chevrolet did make a hybrid version of the GMT800 Silverado that was available to retail customers from 2006 to 2007, but it had a few knocks against it. For starters, it was exclusively a parallel hybrid rather than a series-parallel hybrid. Instead of being able to motor along on electric power alone, it used high-voltage power to assist the 5.3-liter V8 engine. Not exactly the most efficient idea in the world. Plus, the Silverado was a massive thing completely at odds with small pickup truck buyers’ needs. Small wonder that it’s largely considered a footnote in GM truck history. In contrast, a production version of the A-BAT should’ve achieved genuinely superior efficiency to a gas-only truck, important in an era of high gas prices. 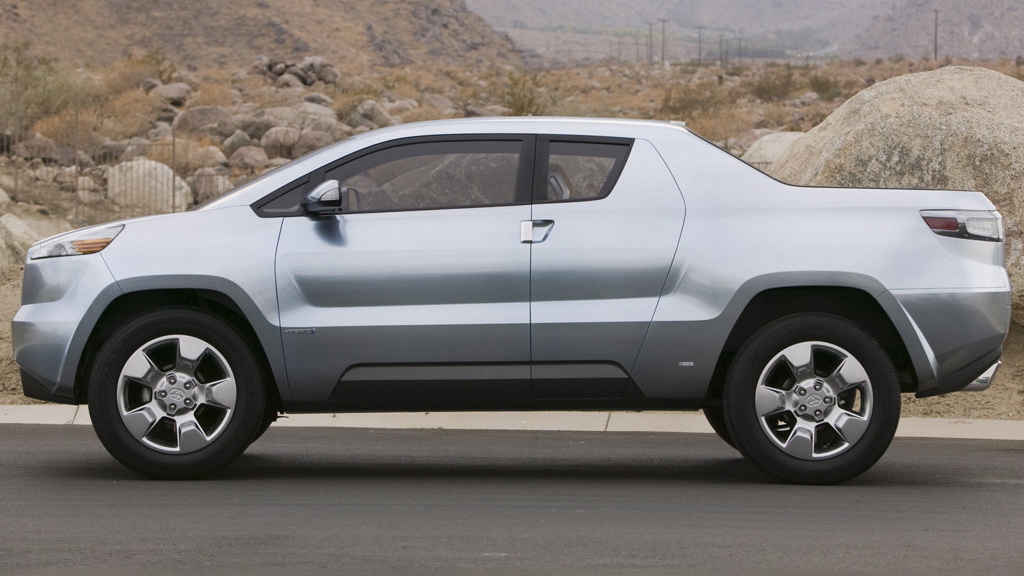 Flash forward to 2022, and hybrid pickup trucks are significantly more desirable than they were in 2007. Not only is the Ford Maverick Hybrid a hot commodity, the Ford F-150 Powerboost hybrid offers massive built-in power than can keep your home’s lights on in the event of a power outage. The hybrid Toyota Tundra is the most powerful engine in the range, while those on a budget can pick up a used GMT900 two-mode hybrid Chevrolet Silverado or GMC Sierra. It feels like the time is right for Toyota to build a hybrid Tacoma, but only time will tell if the brand makes it happen.

All photos courtesy of Toyota

The Chrysler Aspen Hybrid Was A Hemi V8-Powered Towing Beast That Got Over 20 MPG: Cold Start

Thomas is a Nu Rave-blaring, heel-toe downshifting, maple syrup-swilling, chassis-geeking, junkyard parts-hauling, floppy-haired scenester who's been writing about cars since college. His current ride is a 2006 BMW 325i with the six-speed manual gearbox. Instagram: @thomas.hundal Twitter: @thomashundal
Read All My Posts »
PrevPreviousThe Creator Of ‘Knight Rider’ Used This Bonkers Peterbilt Truck In A 1980s TV Show And Now The Truck Is For Sale
NextBMW Pretends Its Social Media Got Hacked And It’s Just Kind Of Embarrassing For EveryoneNext