Okay, okay; you all have suffered along with the non-running heaps long enough. Today we’re going to look at two nice sensible cars that both run and drive, and both have manual transmissions. But because of our price bracket, you gotta compromise somewhere, and that somewhere, in the case of these cars, is the leading edge of the hood.

So let’s see which battered race car you picked, and we’ll get to them.

Moving on: As David has pointed out, the key to finding a good deal on a cheap used car is to know how to drive a stick, and be willing to do so daily. Look for a manual transmission in a car that nearly everyone else would only want with an automatic, and you can save some money and feel all gearheady and superior about it. (This is my car-buying MO as well.) Two such cars are the ubiquitous Toyota Camry, and that college-graduate favorite from twenty years ago, the fourth-generation VW Jetta.

Today we’re going to look at one of each, and while previous owners may have known how to handle a clutch, it looks like they could have used some practice with the brakes. But what’s a little wrinkle on the hood? It adds character. Let’s check them out. 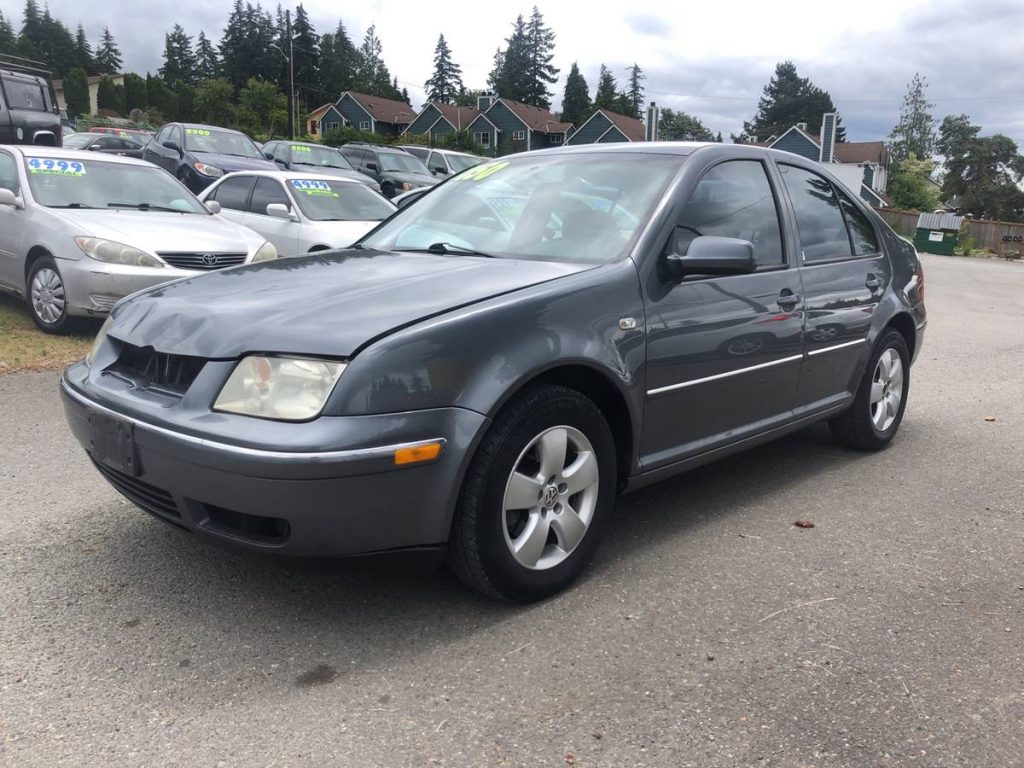 Runs/drives? Doesn’t explicitly say, but they say “call to set up a test drive,” so I assume so

It always perplexed me that the Jetta was so vastly more popular in the US than the Golf was, especially considering our current love affair with hatchbacks (You can call ’em crossovers if you like, but I know better). In the early 2000s, you saw a Golf or two here or there, but these Jettas were everywhere. And as a result, they’re all over the classifieds as cheap cars now, but all too often with an automatic, and either the fragile 1.8t engine, or the service nightmare VR6. 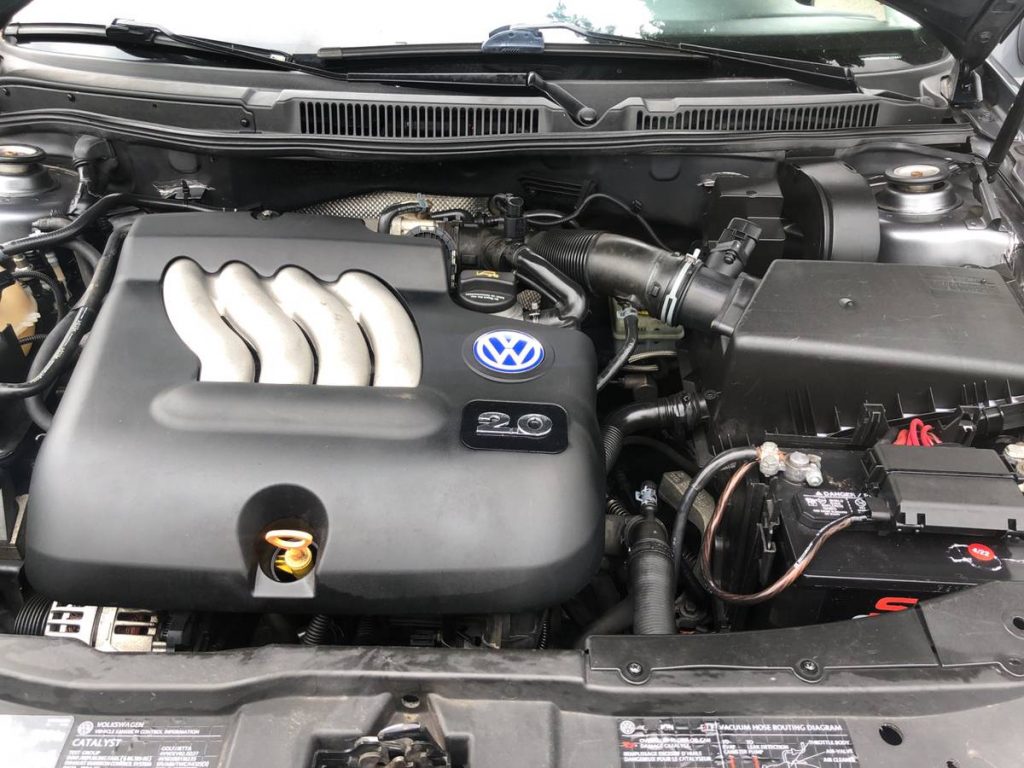 This car has neither of those drawbacks, being powered by the basic two-liter single-overhead-cam four that can trace its roots all the way back to the 1970s. Often derided as the “two-point-slow” by the sorts of VW enthusiasts who favor slammed suspensions and energy drinks, it’s a good solid engine that puts out sufficient power for a smallish sedan, especially when connected to a manual gearbox. Reliability, efficiency, and ease of maintenance count for a lot in cheap used cars, and this powertrain is the pick of the litter when it comes to Jettas. 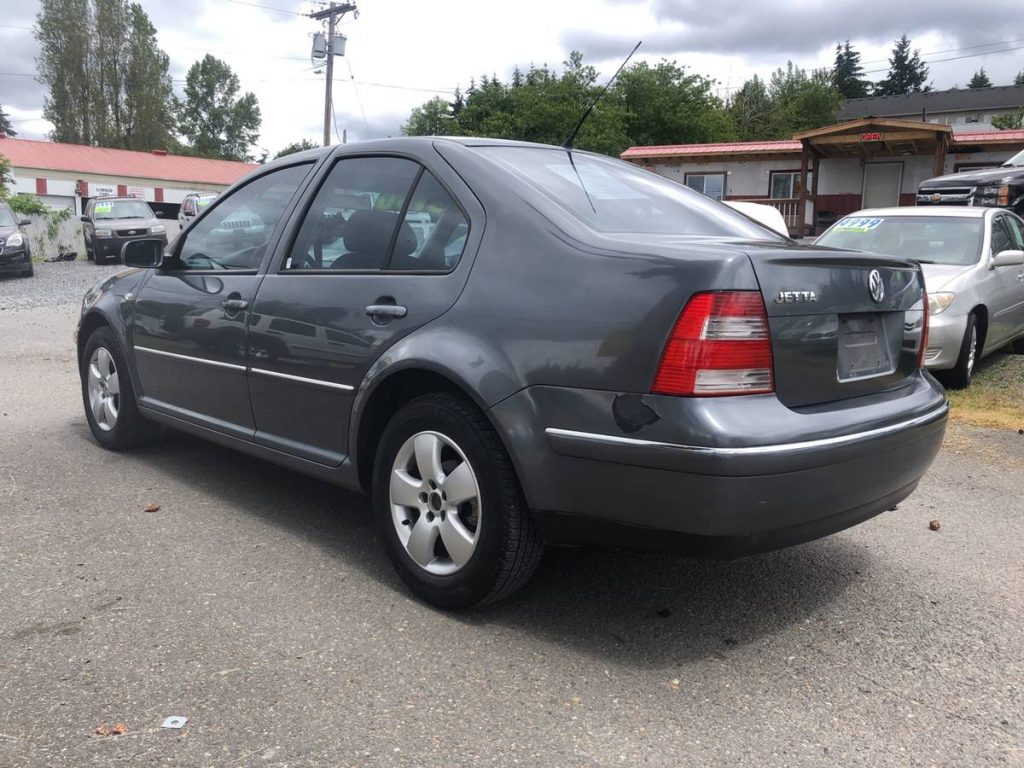 It’s easy to see why these cars were so popular: they’re handsome machines, stylish without being fussy, and a good deal more elegant than, say, a Honda Civic of the same era. This car’s design dates back to the Clinton administration, and it still looks inoffensively pleasant today.

[Editor’s Note: Personally, I think this is the Best Jetta. – JT] 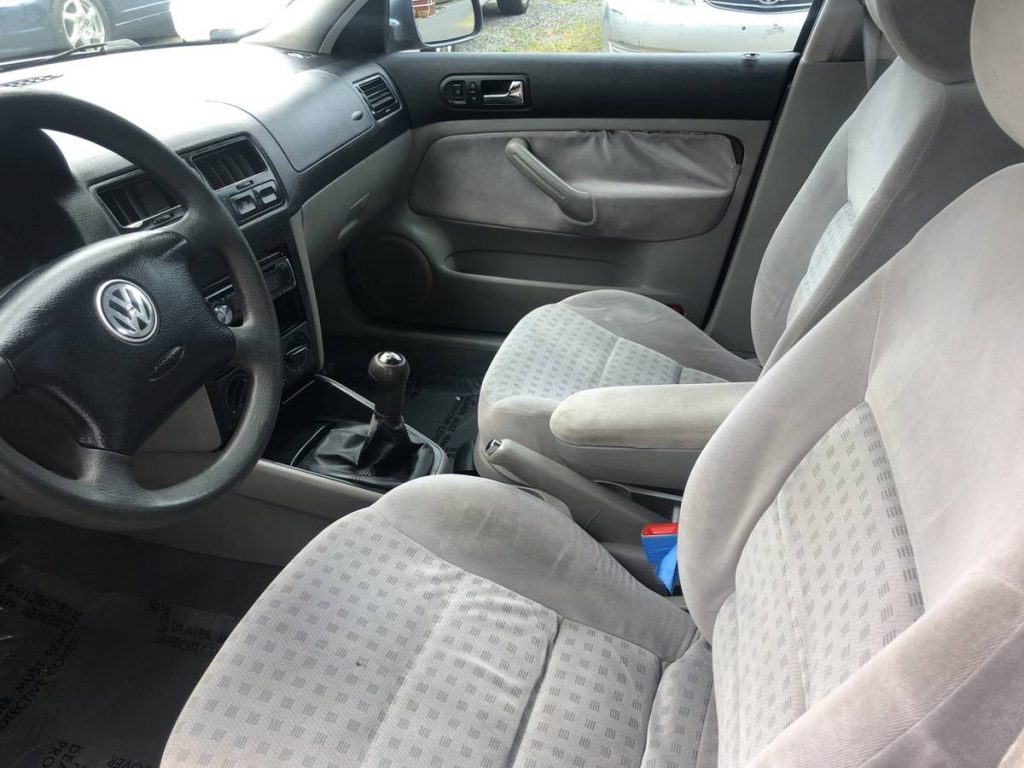 Inside, VW’s foray into “soft-touch” materials during this era made for a lot more wear and tear than the old vinyl-and-plastic Rabbit interiors, but this one doesn’t look too bad. A little grubby here and there, and it looks like the passenger-side door panel is coming apart, but it’s a sub-$3000 car in a seller’s market. This looks a lot nicer than a lot of cars I’ve seen this age. 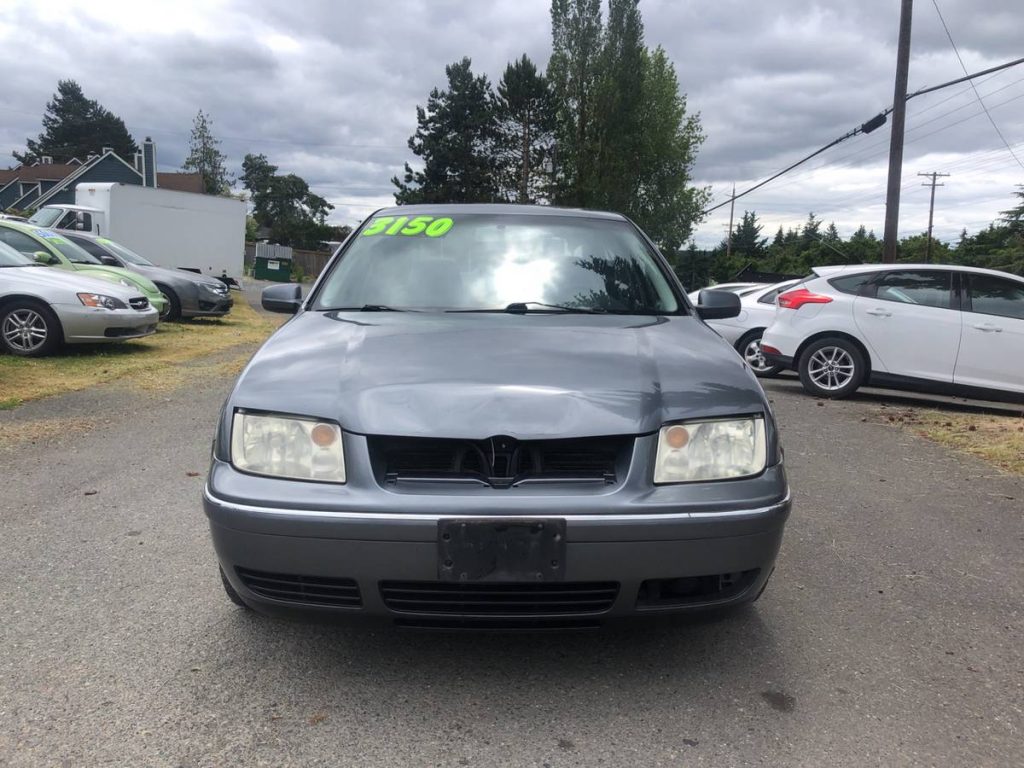 There is the matter of that minor disfigurement on the front, which seems to have taken the entire grille with it. If it bothers you, a trip to a junkyard should score you a new hood and grille from another Jetta, probably one with a more trouble-prone drivetrain, without much effort. 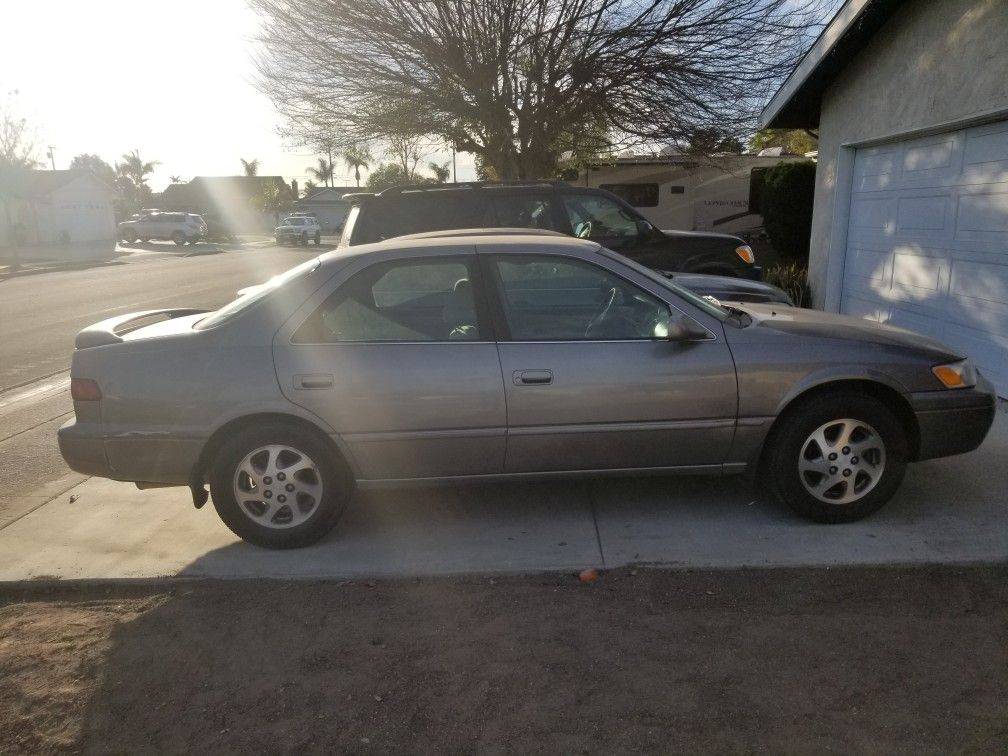 Fun fact: This car is exactly the same non-color as my own daily driver Corolla, a hue that Toyota calls “Taupe Silver Metallic,” but thanks to our own Stephen Walter Gossin, I am going to henceforth refer to simply as “Meh.” As far as I can remember, Toyotas of this era were only available in White, Black, Meh, Ugh (that hideous gold-biscuit-beige), Oh God Not Another Silver One, and That Nice Dark Green You Never See. 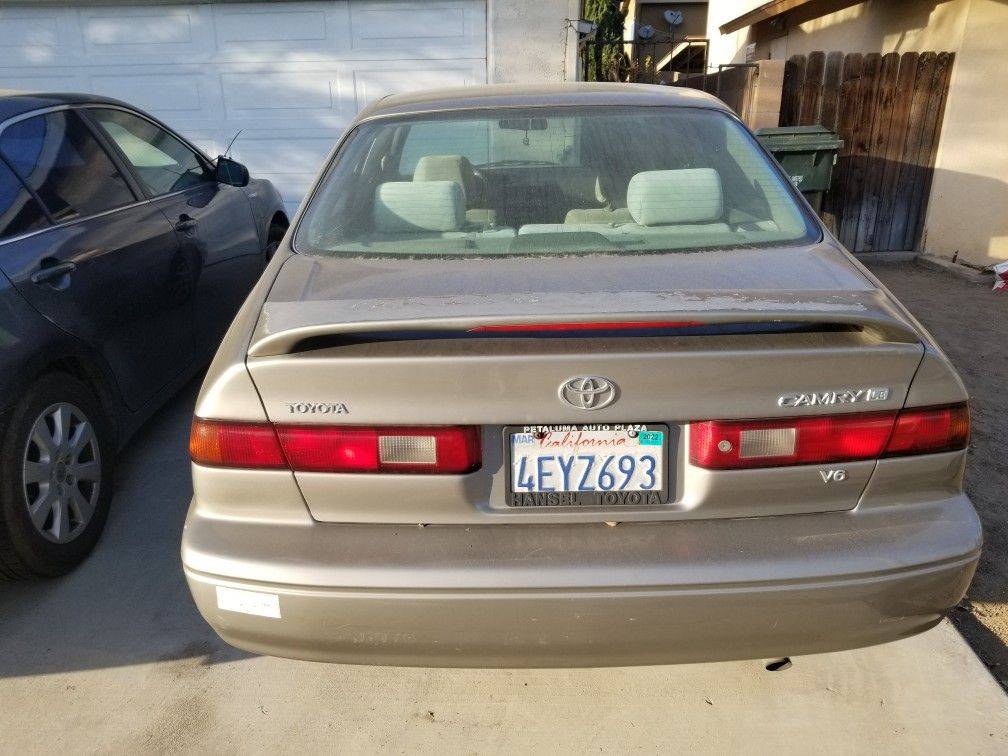 Chromatically challenged though they may have been, there’s no denying that these cars are excellent: reliable, durable, comfortable, and low maintenance. The worst charge you can level against them is that they’re boring, which this particular Camry attempts to alleviate with a five-speed manual backing up its 194 horsepower V6. 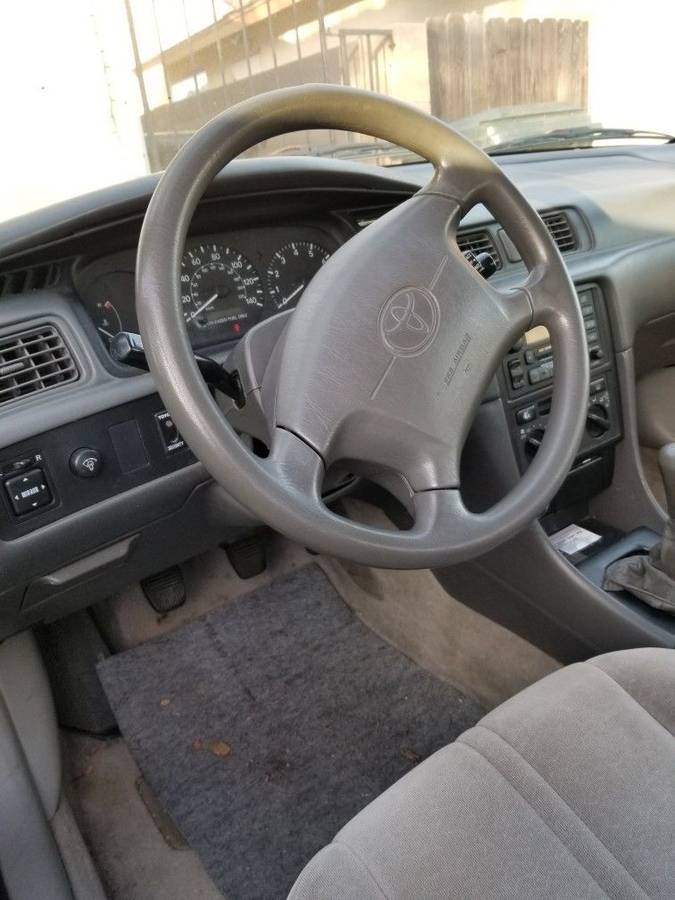 I mean, it’s not going to give anyone “the fizz,” as James May might put it, but it should pull strongly enough up an on-ramp to at least not bore you to sleep. And while Toyota’s front-wheel-drive manual shifters aren’t the toggle-switch-click of a Miata or Boxster, they work well enough. This one is probably a little sloppy after a quarter-million miles, but it’ll get you there. 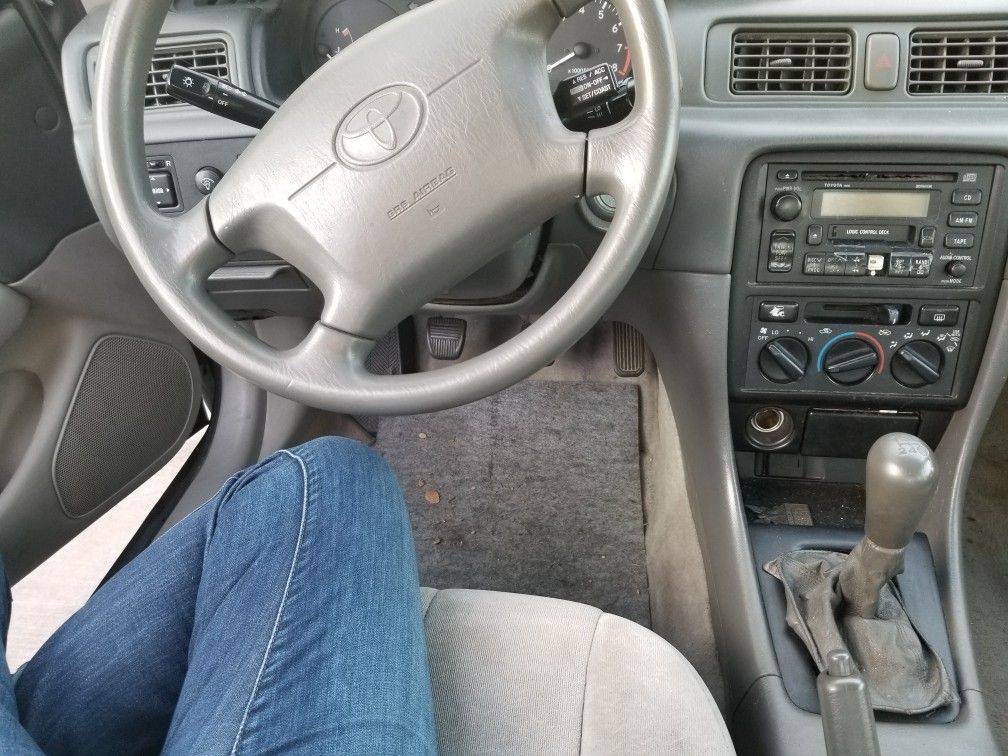 And look! A CD player and a cassette deck! Finally, you can listen to Hootie and the Blowfish again, as it was meant to be heard. 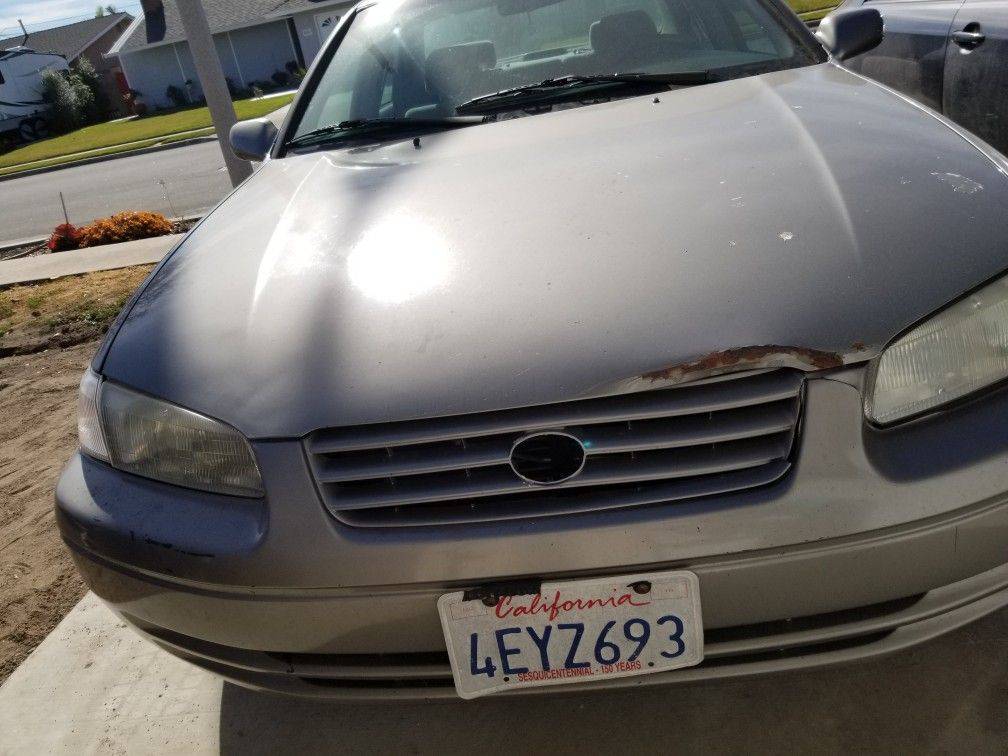 This car’s nose job isn’t as bad as the Jetta’s, but it looks like it happened longer ago, judging by the rust in the wrinkle. But it gives the car sort of a Billy Idol sneer that might make the traffic think twice about messing with you. (What am I saying? This thing is as invisible as they come.)

There you go: two cars that are both good-running, manual, not hideously deformed, manual, efficient, and manual. I don’t know what more you could want from me. Take your pick!