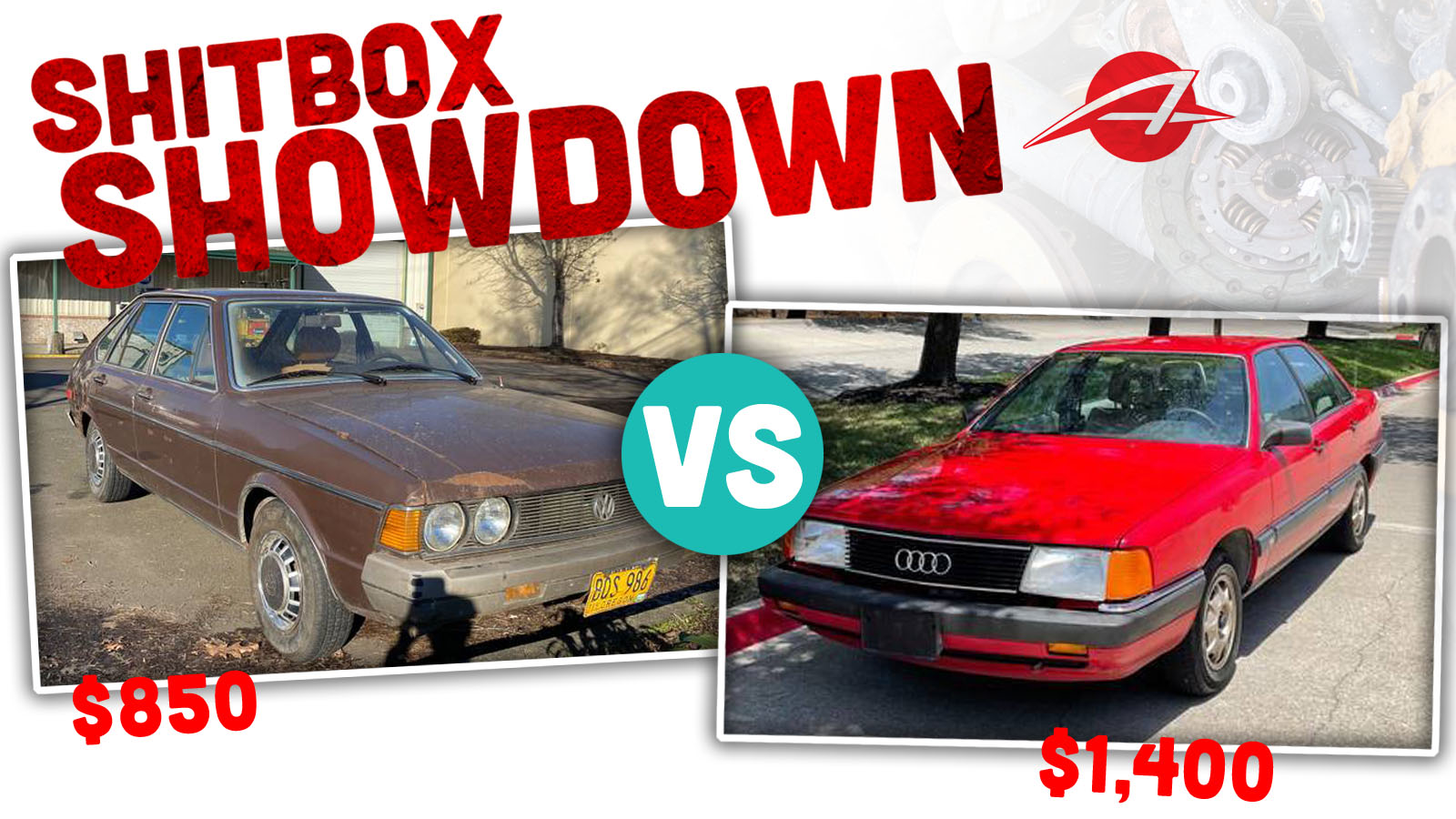 Good morning Autopians! It’s August 1st, or, I suppose, July 32nd in our reckoning. Today, I hope you’ll indulge me in a little personal walk down memory lane as we take a look at two cars my family owned when I was growing up. But before we get there, let’s see which vessel won our naval battle on Friday:

Well, that’s pretty decisive. It’s also wrong; this is one rare instance in which the correct answer, “neither,” wasn’t a choice. Don’t get a boat. Get a friend with a boat.

This pairing brought up in the comments an interesting phenomenon that I think warrants a mention: When it comes to obscure old machinery, there will always be a small but vocal group who absolutely love it, sing its praises, and won’t hear a bad word against it. There will also be plenty who had a bad experience with it, which causes them to denounce any and all examples of such a machine as “junk.” It’s important to take both of those groups’ anecdotes with a grain of salt, because I suspect the truth lies somewhere in the middle.

Our two cars today are definitely obscure, mechanically related, and both a part of my personal history. My family’s car choices were always offbeat, encompassing everything from an Opel Manta to a Fiat 128 sedan to a Dodge 600. My love of weird old slow cars, and my near-total brand agnosticism, come directly from that hodgepodge of vehicles. We had one of each of these, one of them nearly identical to the car shown here. I promise I will endeavor to refrain from too much wistful reminiscence as we check them out. 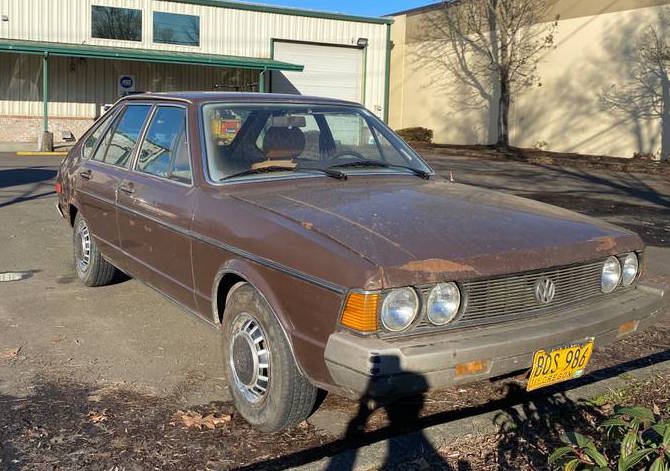 Runs/drives? Yes, but “not well”

The first number you need to know when it comes to this car is forty-eight. That’s the horsepower rating. At sea-level. At 12,095 feet, the elevation of Independence Pass in Colorado, it’s… less than that. At the top of Pike’s Peak – 14,110 feet – it’s even less. But it can climb to both those elevations; it just takes a while. I know this because we took family vacations in one of these when I was in grade school, and my mom loved the Colorado mountains. [Editor’s Note: This is such an absurd car to have grown up in. So far from where the industry is now, and where it’s headed. It’s awesome. -DT] 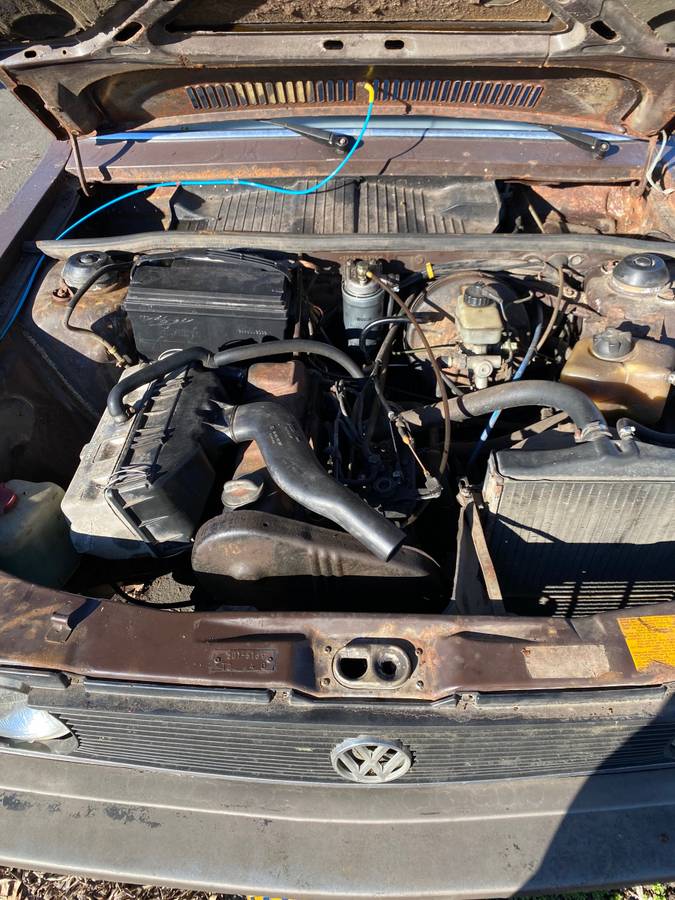 This absurdly low-powered engine made for some slow Rabbits, but in the first-generation Passat (as this car was known everywhere else) it dragged the 0-60 time down to just over 19 seconds. That’s quicker than a contemporary Mercedes-Benz 240D by almost 3 seconds, but still languid. That’s the downside. The upside is that these Dashers flirted with 50 miles per gallon on the highway, and in a whole lot greater comfort than the tinny little Japanese boxes that could pull similar numbers. 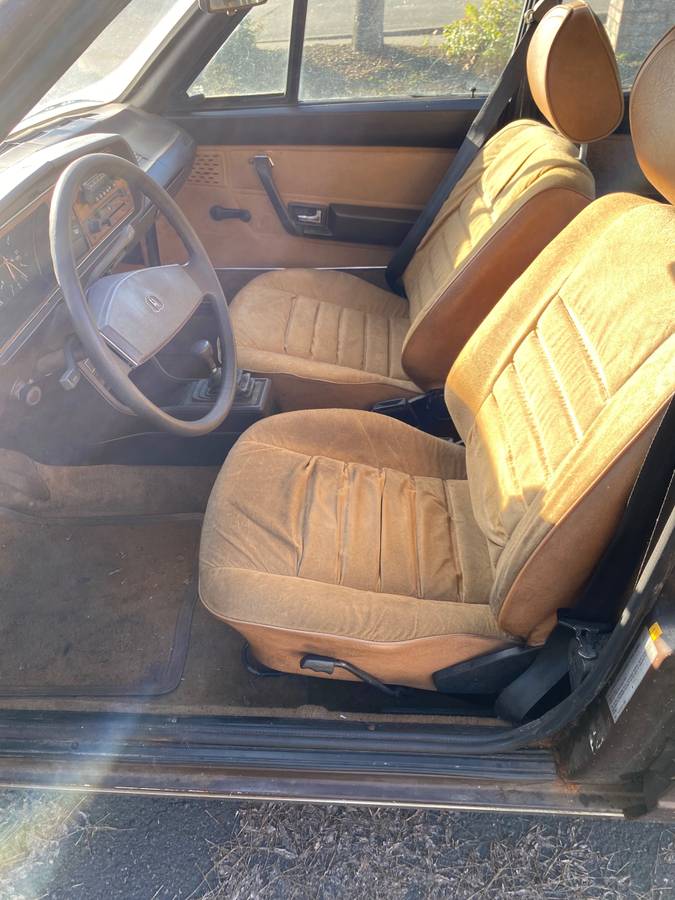 This particular Dasher has seen better days. It was an Oregon coast car, and the salt air has not been kind. That crisp Giugiaro styling is riddled with rust and dents, and it’s been sitting for 20 years. Diesels can generally handle long storage pretty well, and it does run (and presumably drive), but there will still be a lot of work to do if you wanted to put it back on the road. 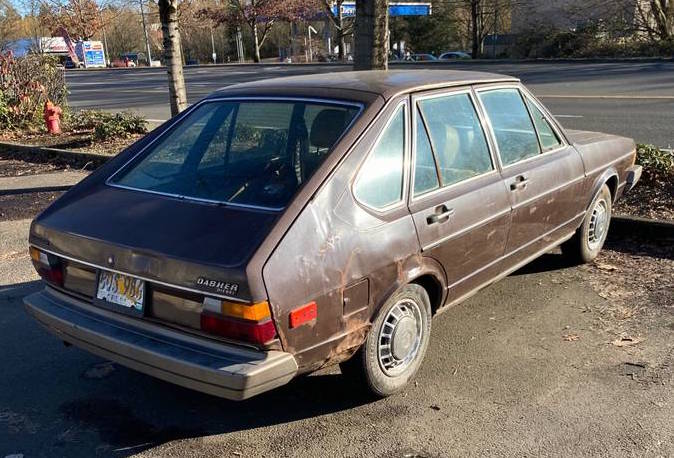 Is it worth it? Probably only to some weirdo like me who has a sentimental attachment to it. And this four-door doesn’t push the nostalgia buttons nearly as much as a two-door like our old one was. Don’t worry; I’m not crazy enough to drag this old rustbucket home. But I kinda hope someone is that crazy; I’d hate to see it go to the crusher. 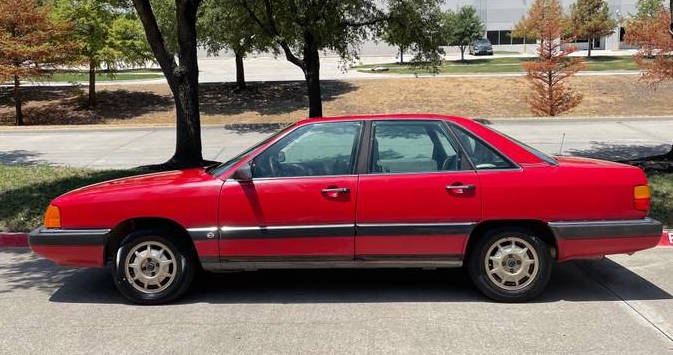 This car still looks like a spaceship to me. When this generation of Audi’s notorious 5000 model first appeared in magazines in 1983, it looked like the future: impossibly sleek and completely unlike anything else on the road. To younger eyes it probably looks a lot more stodgy and old-fashioned, but there are a lot of firsts or near-firsts here, especially in terms of aerodynamics: flush-mounted windows, a seal along the leading edge of the hood, and an undertray are all common now, but they were exotic and futuristic in 1983. 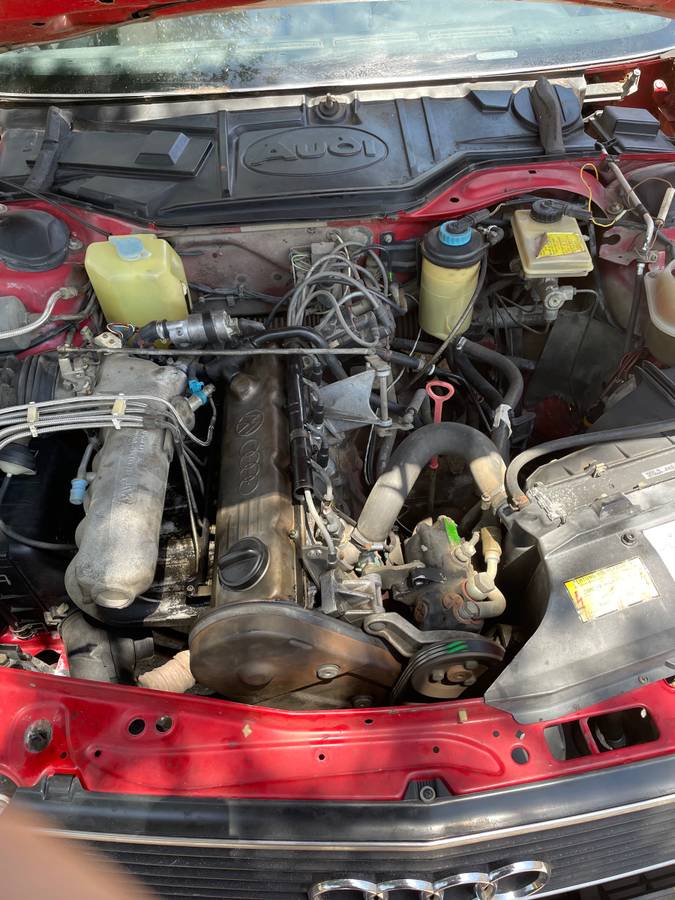 The big Audi shares some DNA with the Dasher above; both use the same canted-over longitudinal engine placement with a transaxle behind it driving the front wheels. In some of the Audis, of course, that transaxle had a driveshaft out the back end leading to the rear wheels (Audi’s legendary “Quattro” all-wheel-drive system), but here we have only front wheel drive.

This car is an automatic, the very subject of an infamous hatchet job by TV news program 60 Minutes. By 1988, when this car was built, the gearshift had an interlock that would not allow the shifter to move out of Park unless the driver’s foot was on the brake. Audi was later exonerated, but the damage was done, and it took years for their US sales to recover. 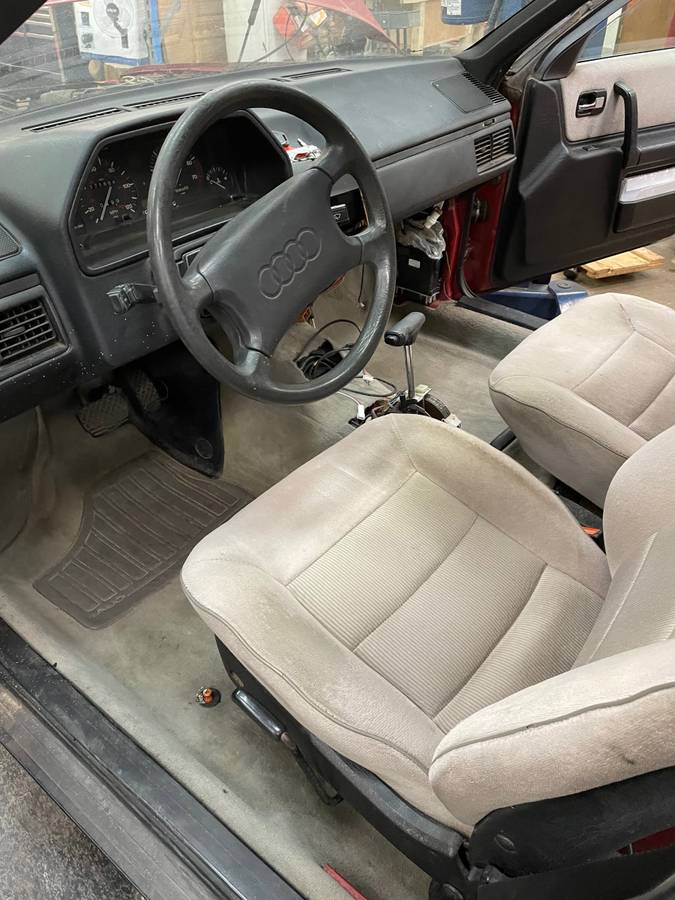 The whole fiasco was a shame, because the Audi 5000 was a really, really nice car: smooth, quiet, solid, good-handling, and a respectable performer for its time. We owned three of them in my family over the years, one virtually identical to this one, only a year older. (It’s the car I drove to my senior prom, in fact.) All were wonderful cars to drive, but fussy and high-maintenance. That much has not changed when it comes to Audi. 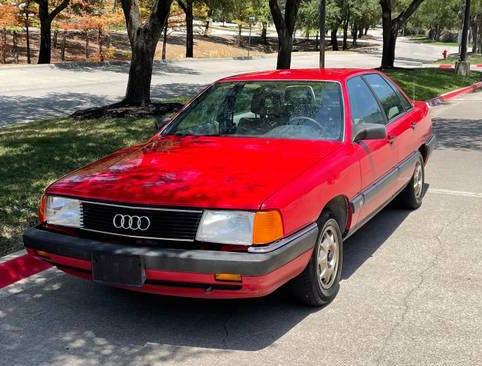 This 5000 runs and drives well, but a lot of the interior is taken apart. The HVAC controls need repair, and the driver’s side window won’t go down. It includes a whole trunkload of spare parts, three service manuals, and all the removed interior bits. This one is a whole lot more tempting to me than the Dasher. In fact, it’s probably a really good thing it’s all the way down in Texas.

So, that’s my little trip down memory lane, and thank you all for coming along. Your choices for today are a used-up slowpoke and a hot mess. Whether this lends any insight into my own oddball automotive tastes, I’ll leave up to you.