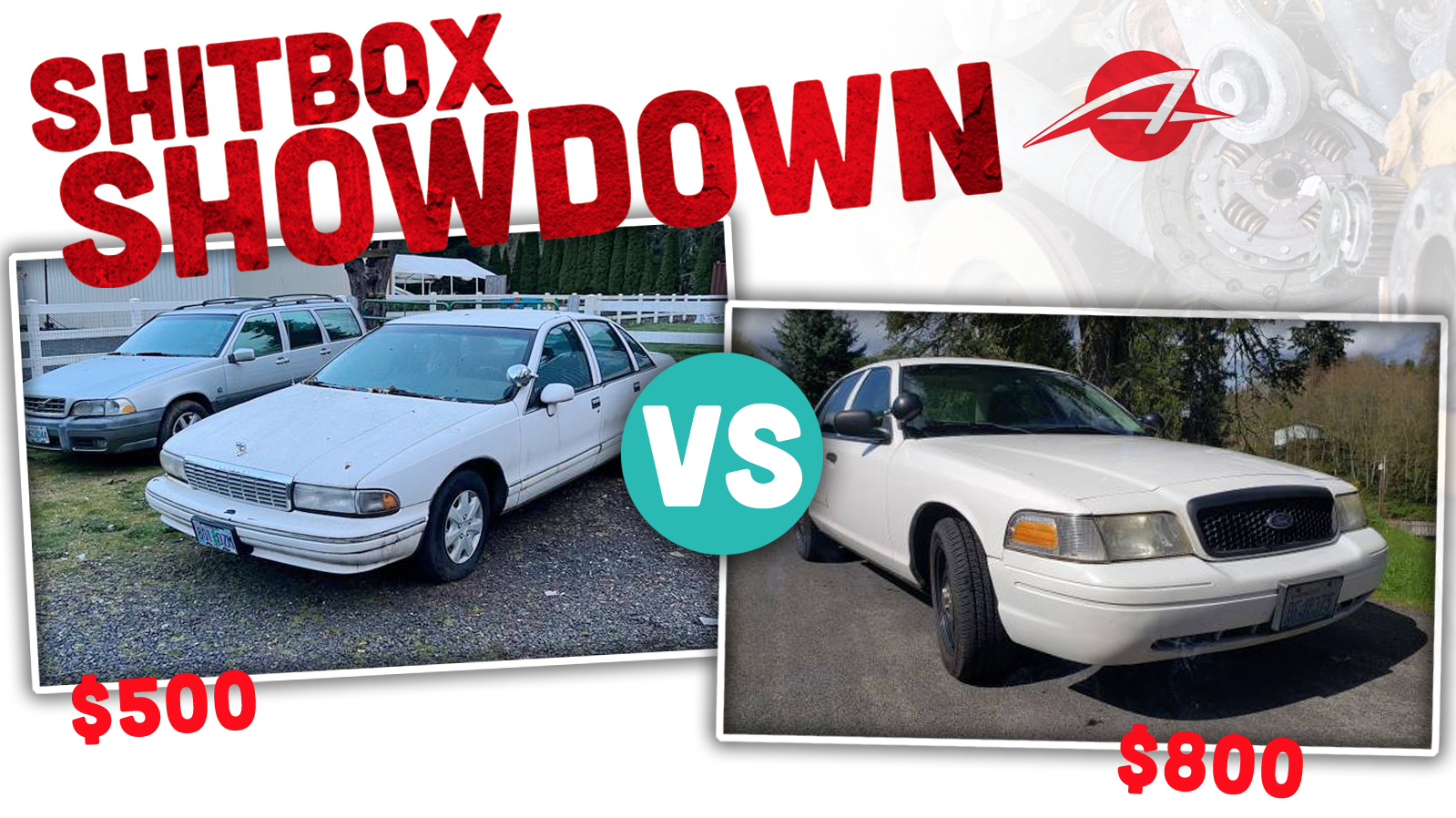 It’s time once again for Shitbox Showdown! (I feel like we need some catchy theme music here. I’ll work on that). Today, the internet classified gods have smiled upon us, granting us a perfect matchup — two old-school body-on-frame police cars, one Ford, and one Chevrolet. Both are well under $1000, and both are — like so many of their former backseat passengers — thoroughly busted.

But first, a quick programming note: I’m writing these the evening before, since I’m on the west coast and I don’t feel like getting up at 4 AM, even for this sweet gig. So I’m placing a cutoff time for votes at around 6 PM Pacific time, when I get home from my day job and start writing. What this means is, vote early… and vote often.

Right, so with that, let’s take a look at yesterday’s results:

Oof. Bad start for Chrysler. Two losses in a row. Lots of commenters rose to the PT Cruiser’s defense, but it was the yellow Buick’s pitted-chrome snout that crossed the finish line first, even with a bad tranny. 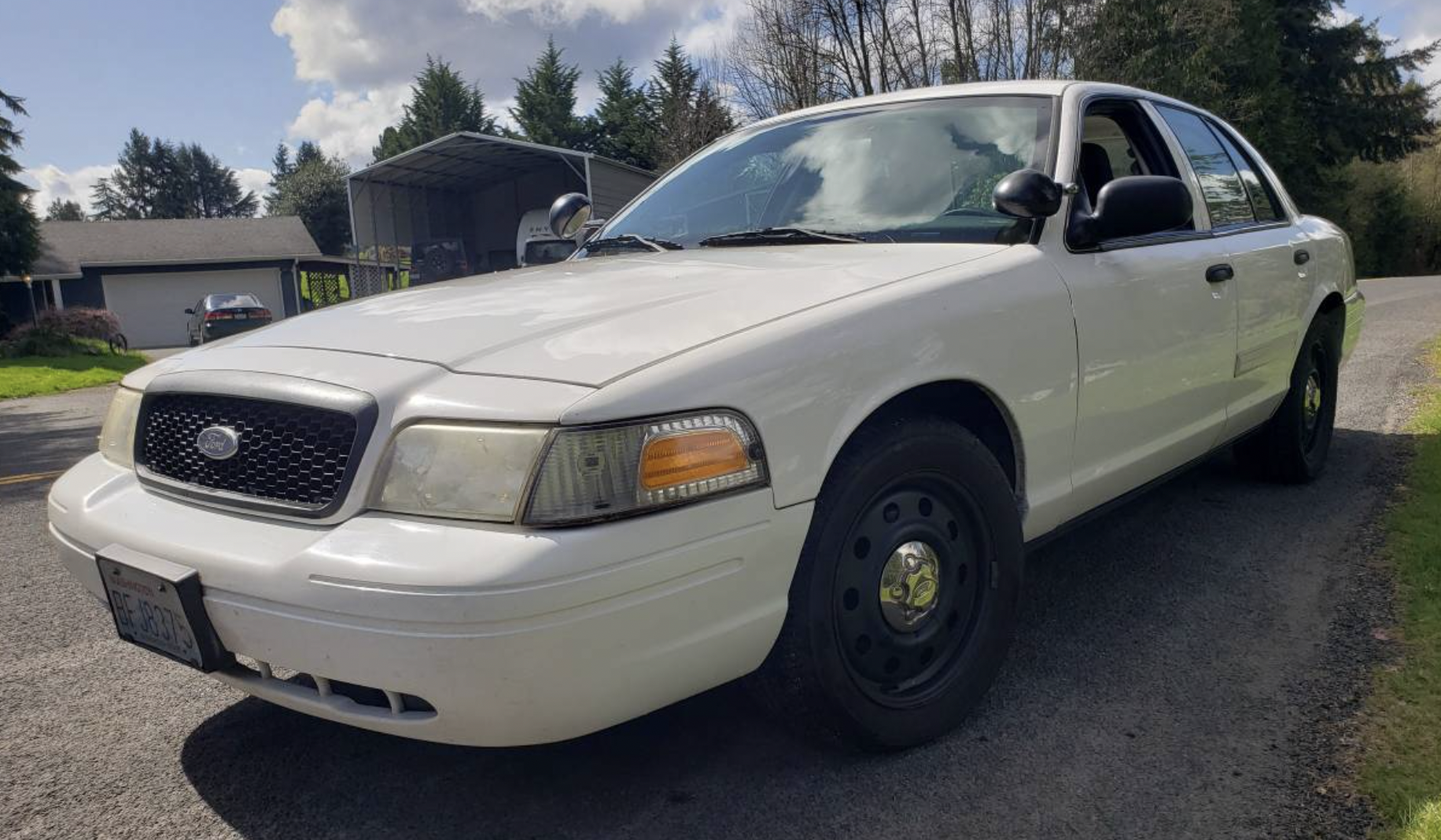 No vehicle’s headlight pattern is more feared than that of the Ford Crown Victoria. See one of these in your mirror, and you instinctively let off the gas. Never mind the fact that the “Panther” platform on which it’s built has been out of production for ten years and there aren’t many left in police service. This car has been the de-facto automotive face of law enforcement since the late Renaissance (seriously, the Medicis had a fleet of Crown Vics to patrol Florence), and it’s going to take a generation or so to get that knee-jerk reaction to them out of the collective unconscious. 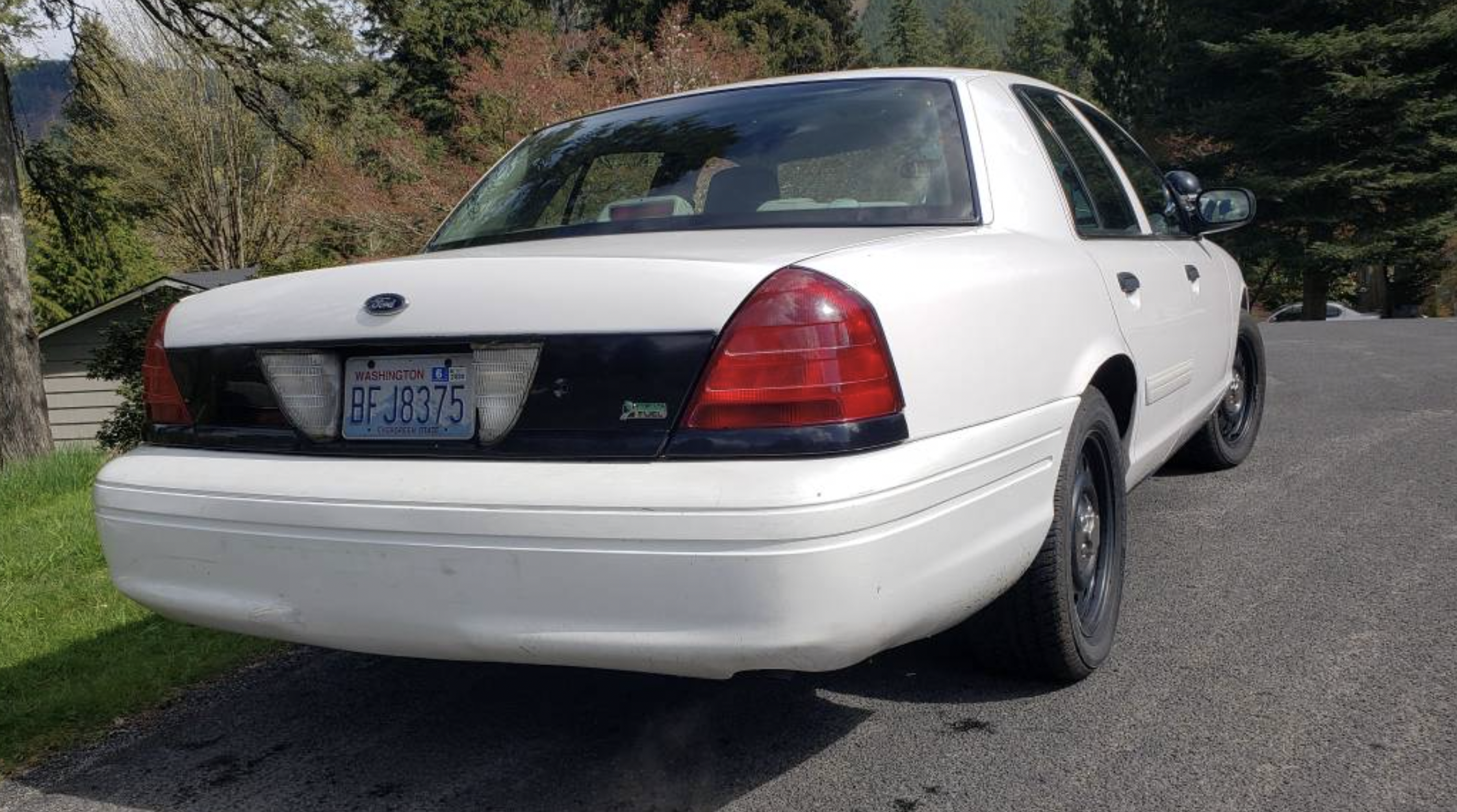 This particular Vic is one of the later models, which got such niceties as rack-and-pinion steering and some extra safety doodads. Since it’s the P71 “Police Interceptor” model, it also has a list of heavy-duty upgrades that would do Elwood Blues proud: extra cooling, bigger alternator, stiffer suspension, and a lower rear axle ratio. (These cars have a huge following, and I’m sure any number of enthusiasts can fill in the specifics, but suffice to say, it’s strong and good.) 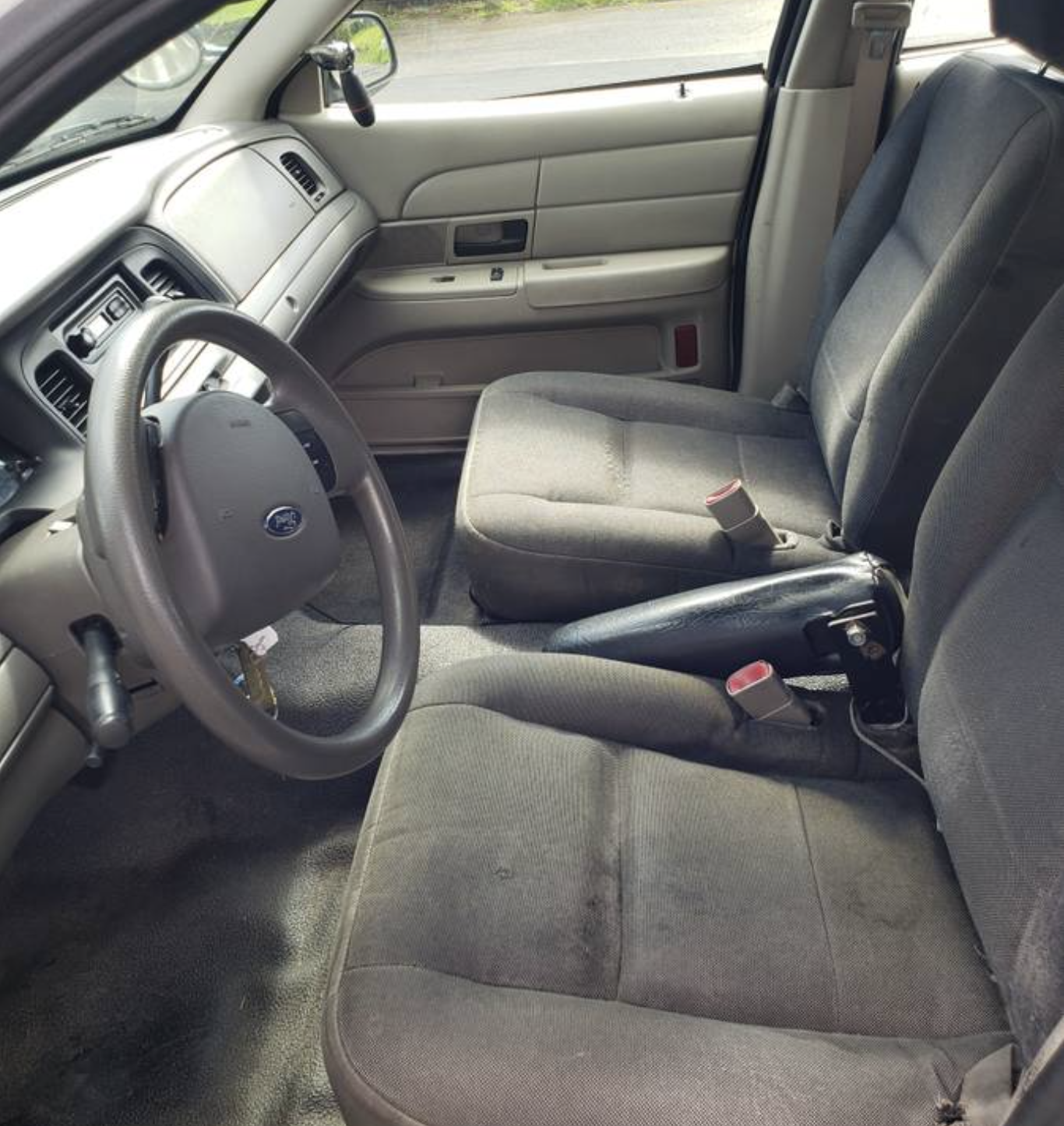 But not all is well: According to the seller, this car has no compression on one cylinder, turning the 4.6 liter V8 into effectively a V7. No bueno. A gremlin of unknown malignancy has also taken up residence in the dash, and the cruiser needs a new windshield. But the seller says it runs, and hey, it only has to make it as far as the Cook County Assessor’s Office, right?

[Editor’s note: After nine hours of brain-wracking, I’m being told that Mark was apparently making an extremely random reference to the Blues Brothers (see below). Did anyone else get that? Have I been living under a rock?] 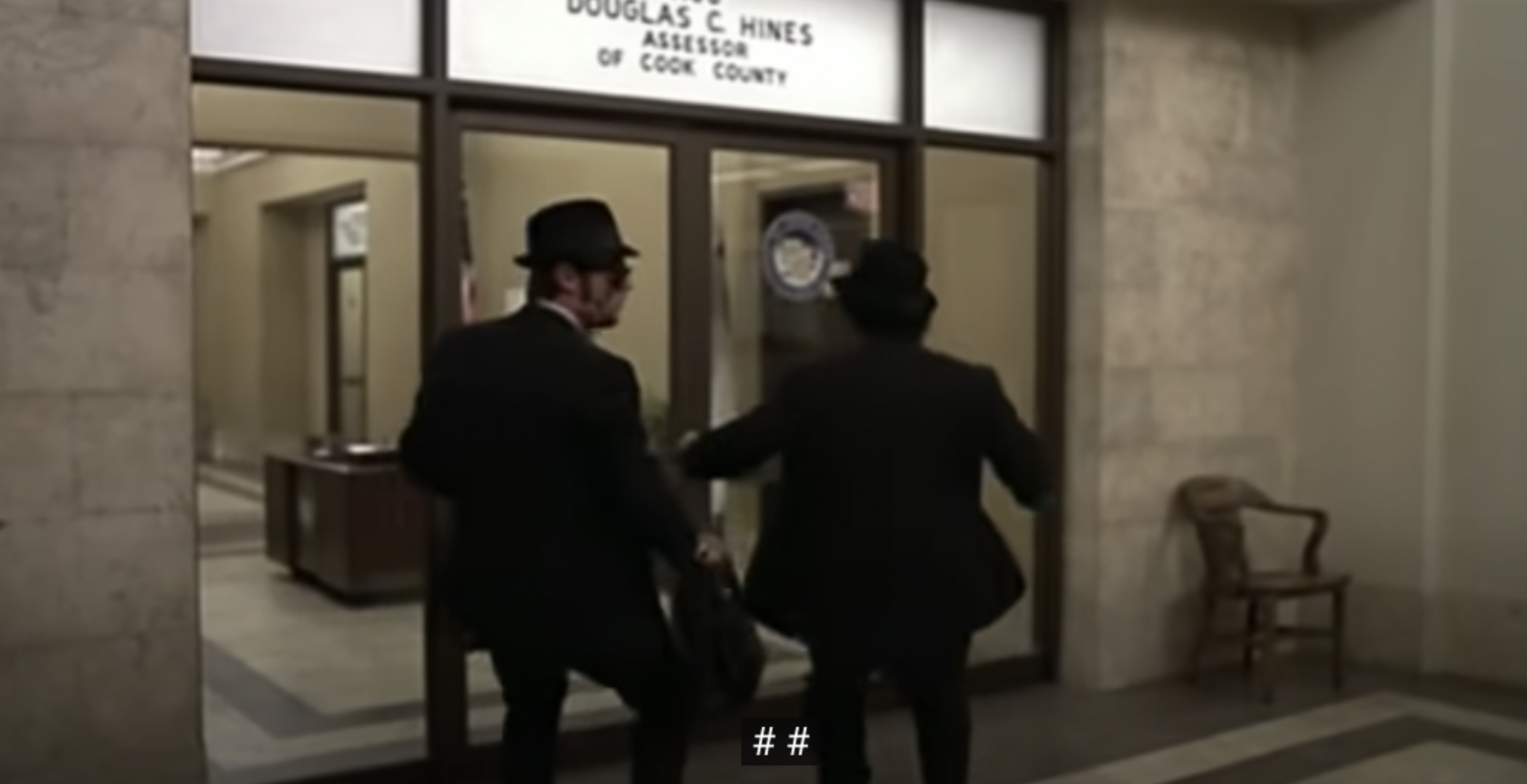 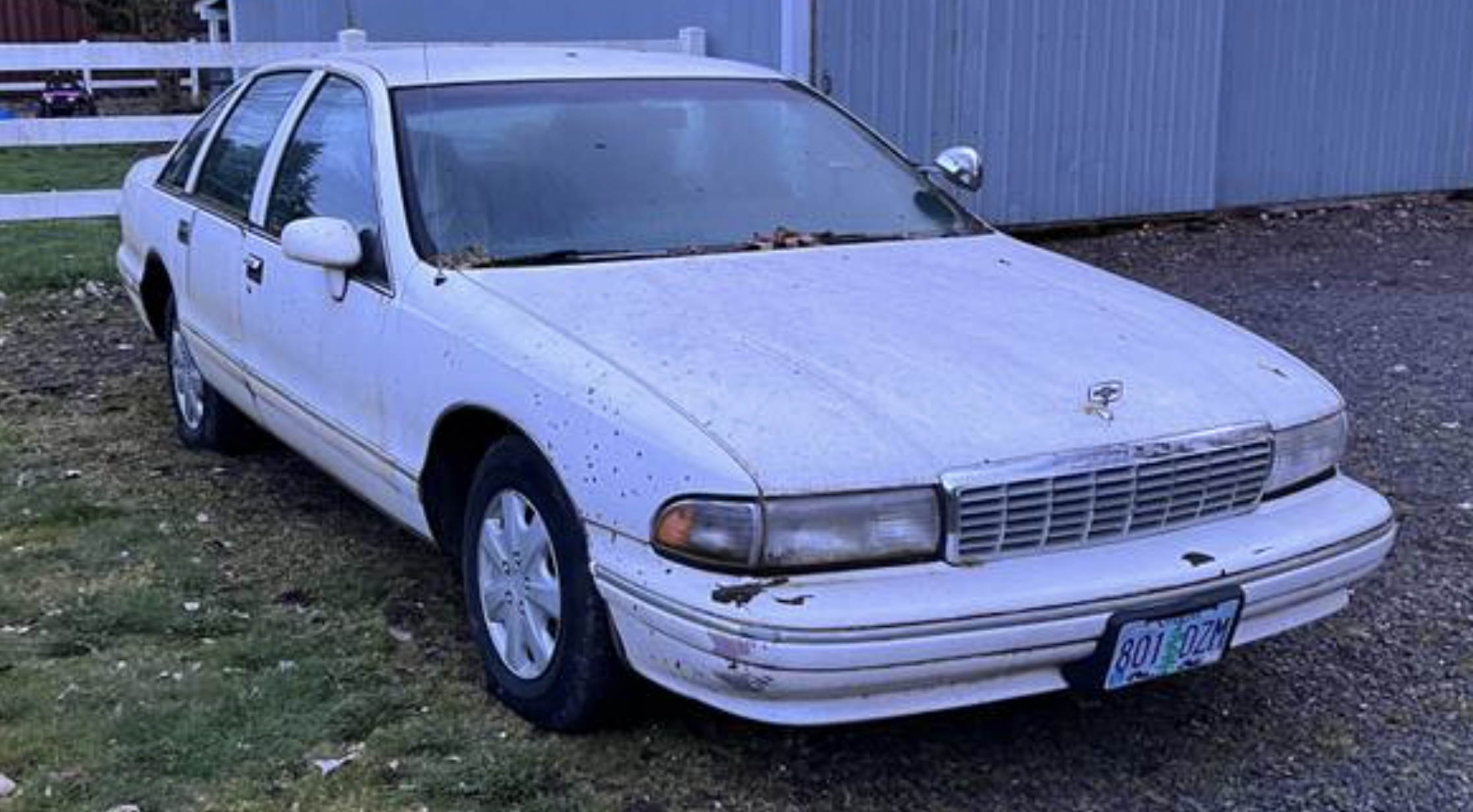 I don’t remember from whom I first heard the nickname “Shamu” for these cars, but it was not long after the redesigned 1991 B-body appeared. If you’ve ever seen one in black-and-white police livery, you’ll know how apt the name really is. This car isn’t really all that much bigger than its boxy predecessor, but it looks enormous.

As with the Ford, this car has a special equipment package for police work: Special Equipment Options code 9C1 in GM-speak. This is a whole host of heavy-duty goodies that make this car a bit stiffer and stronger than Grandma’s church cruiser. While of course the light bar and other cop-car bits are taken out of these cars when they retire from police use, departments often leave behind the coolest and most potentially useful gadget: the spotlight. 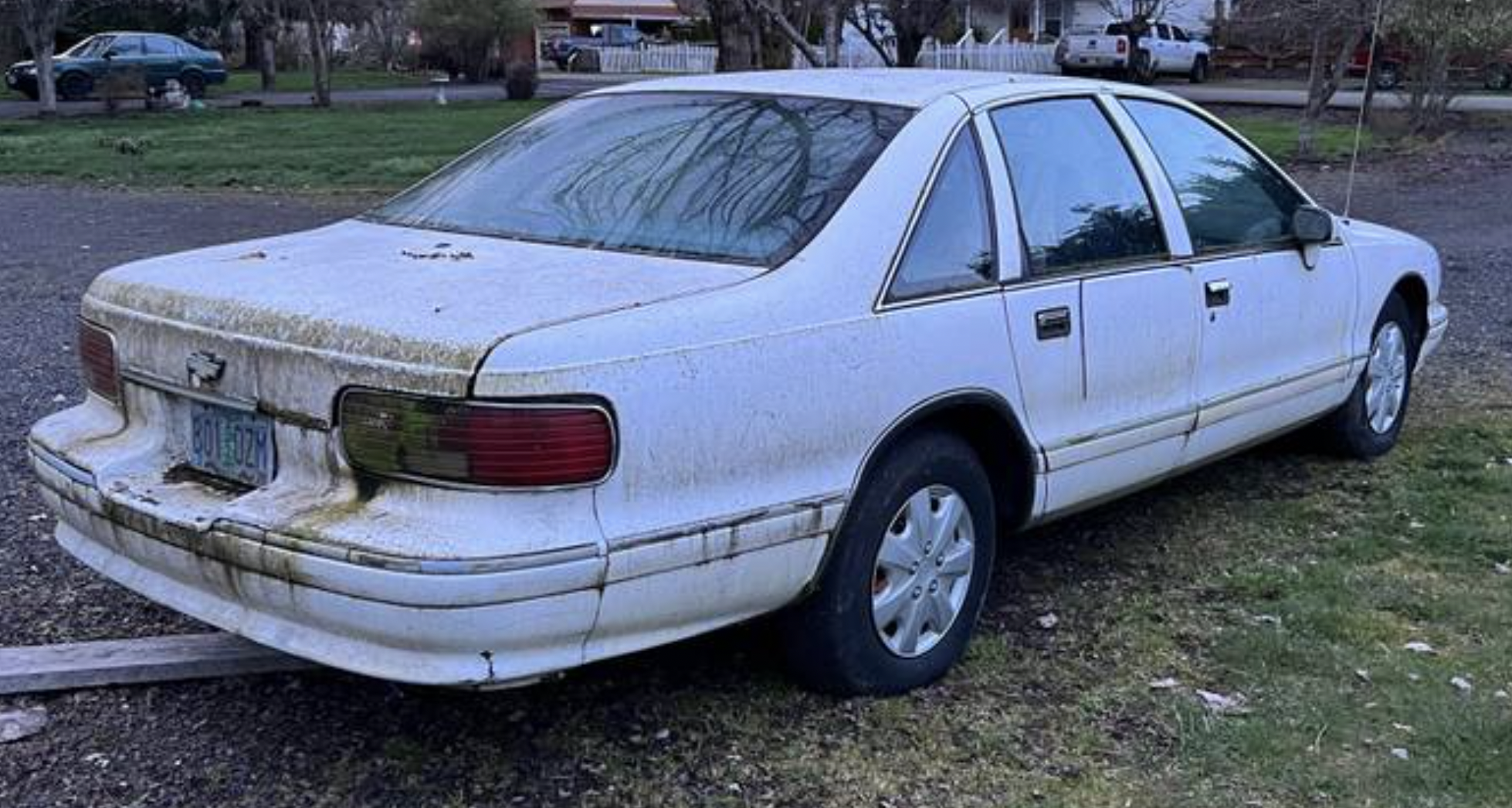 What this car doesn’t have, sadly, is the 260 horsepower LT1 V8 that would arrive under the hood just a year after its production. Instead, it makes do with (probably) a 205 horse 5.7 liter V8 or (maybe) the same 160 horse 4.3 liter V6 that finds a home in my old Chevy truck. Either way, you’ll have to outsmart the bad guys, because you probably won’t outrun them.

This car is a bit of an unknown, condition-wise, as it has been sitting for “a few years”. But hey, it’s $500, and it should look okay once you get all that good old Oregon moss off. That green gunk finds its way onto everything that sits for too long around here, but luckily it comes off with a power-washer. 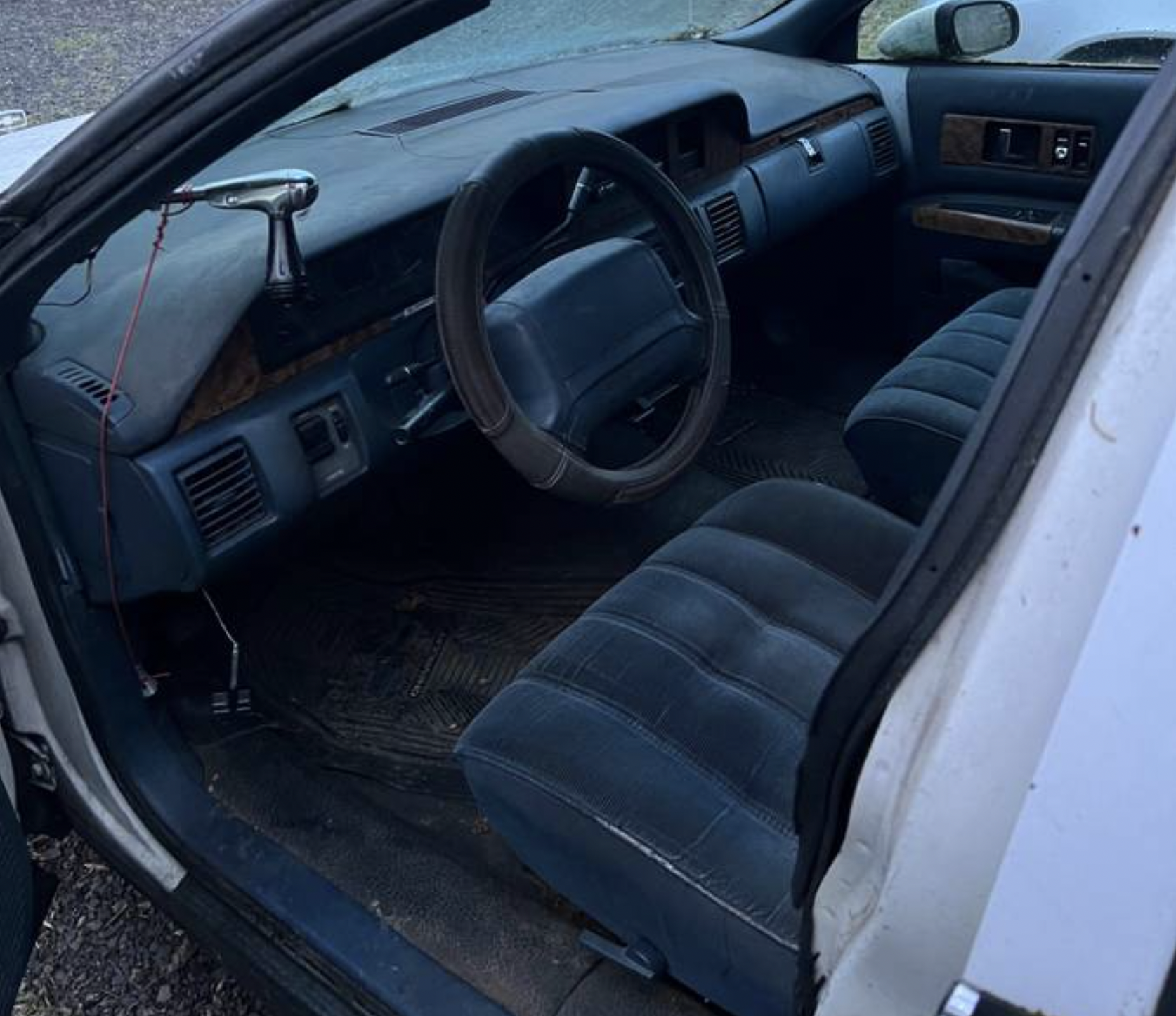 So what will it be, Autopians? Limp home a broken Crown Vic, or tow home a derelict Caprice? Choose your weapon. And no saying “they both suck and I’m not voting;” that’s a cop-out.

Read All My Posts »
PrevPreviousCold Start: Oof, She Doesn’t Look Happy
NextVolkswagen Puts Some Combustion-Powered Cars On The Chopping BlockNext