The cutaway model is a bit of a dying art, and I can’t say I’m surprised. It’s expensive to hack up pre-production hardware for auto show visitors to gawk at, even if much of that hardware is destined for the crusher. Thankfully, Stellantis still sort-of believes in the cutaway model, so let’s take a look at a display model for Stellantis’ STLA Frame architecture underneath the Ram Revolution concept.

First, a primer on exactly what STLA Frame is. At the core of Stellantis’ big electric push are four EV platforms called STLA Small, STLA Medium, STLA Large, and STLA Frame. Yes, STLA is pronounced ‘Stella.’ STLA Medium and STLA Large are expected to launch this year, although it’s tough to say what will ride on them first. Will the Jeep Wagoneer S or the upcoming Dodge Charger replacement run on STLA Large first? What sort of Peugeot, Opel, Alfa Romeo, and DS products will ride on STLA Medium? At this point, only Stellantis knows.

However, we know for sure that the upcoming electric Ram pickup truck will use the STLA Frame platform, and Stellantis has given everyone an early glimpse by rolling out a prototype frame of sorts at CES. Our friends at engineering firm Munro & Associates managed to capture this display on video, so we’re able to dive in and have a gander. 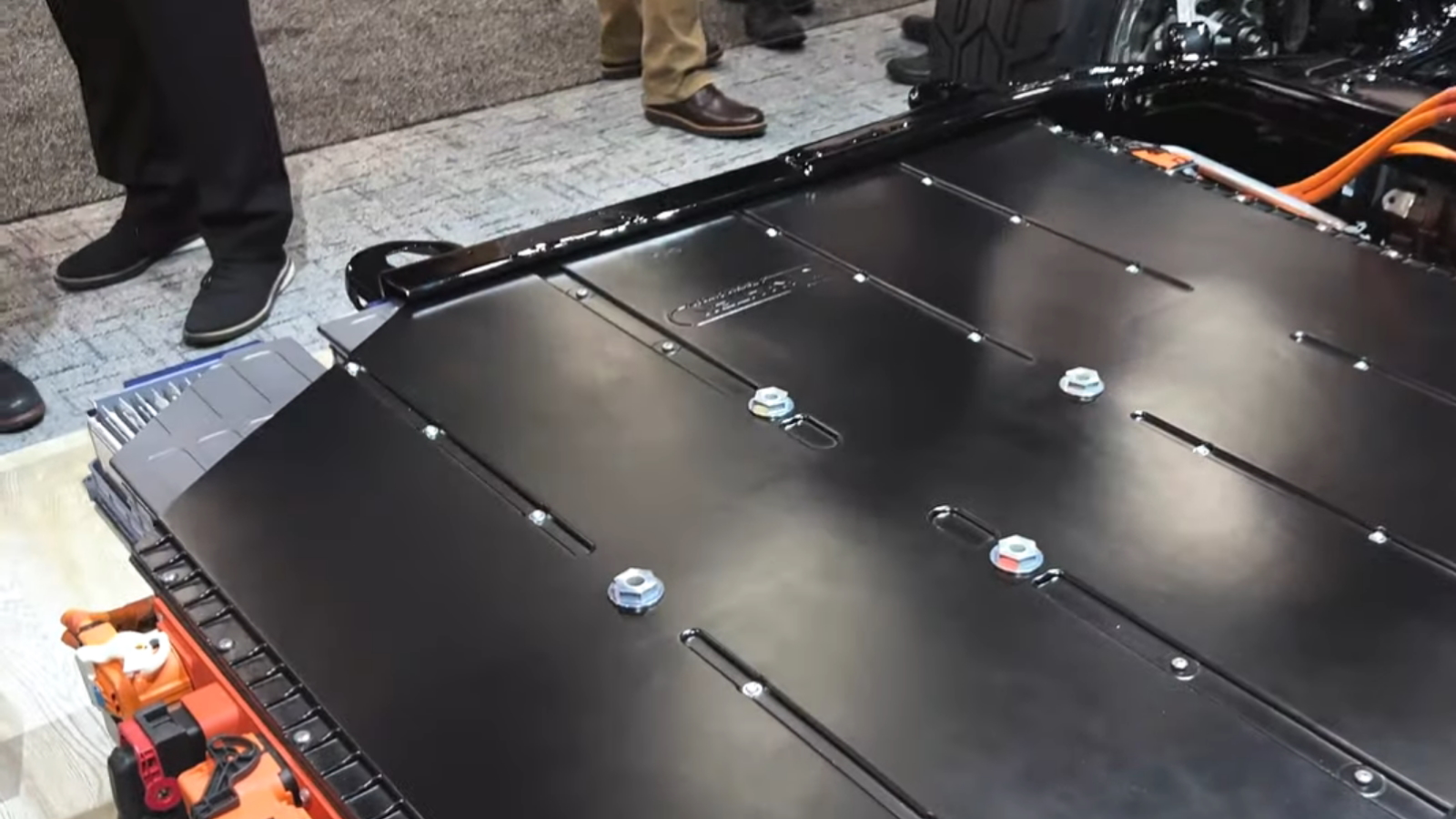 Let’s start with the frame itself. Unsurprisingly, it’s a fully-boxed fth, as is typical for full-size pickup trucks these days. However, like on the Rivian R1T, the frame appears largely open between the rails to allow space for a battery pack. This likely means that the battery pack plays a structural role, absorbing crash energy in the event of a side-impact collision. 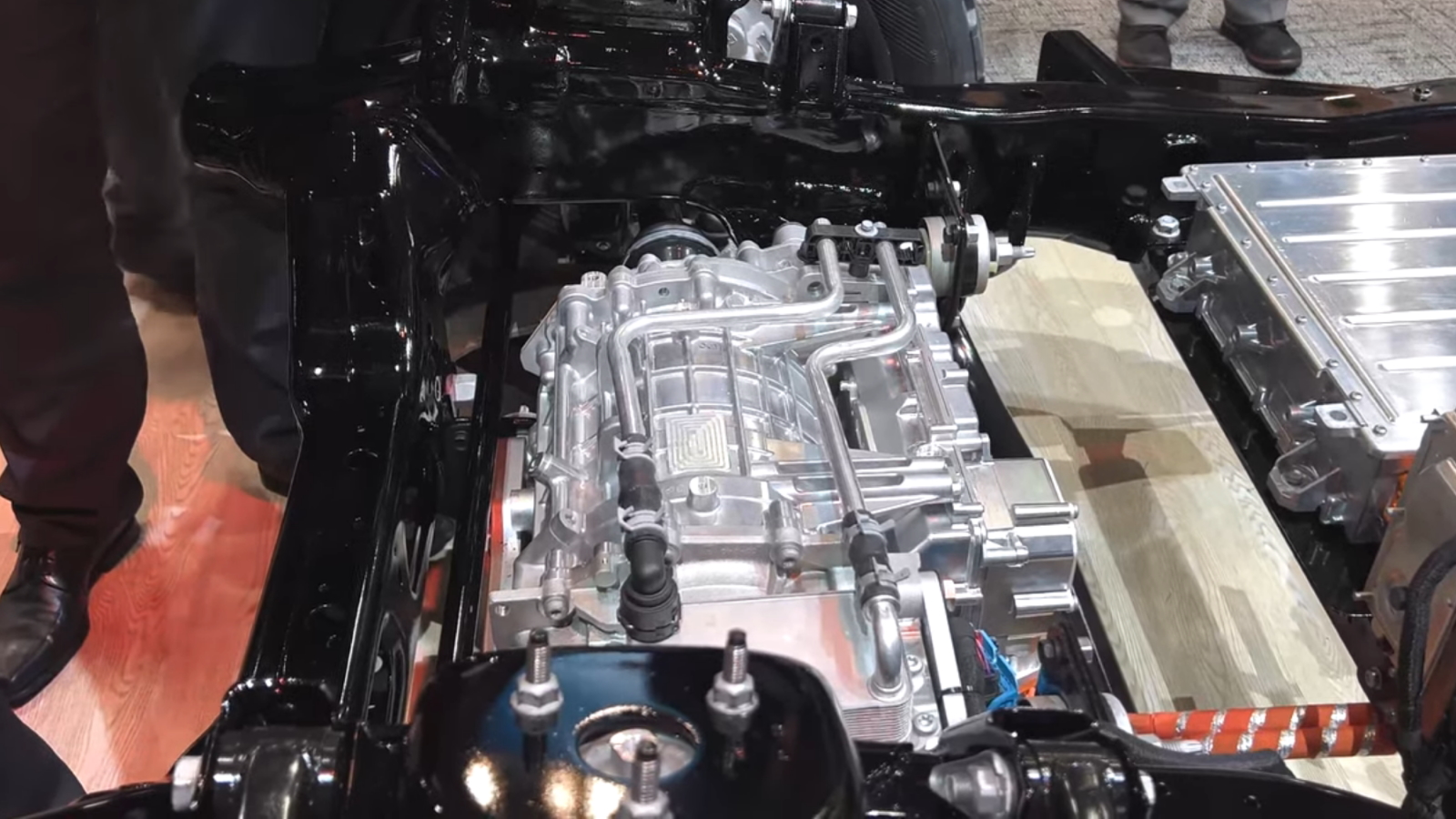 Moving up front, let’s take a look at the front drive unit. Sandy Munro thinks that Stellantis might retain this motor for the inevitable production model, which isn’t a bad bet to make. It’s certainly a beefy unit, but it’s packaged nice and low in the frame in a way that should benefit frunk space. Stellantis was able to make this happen by putting the motor right behind a major crossmember. Smart packaging. 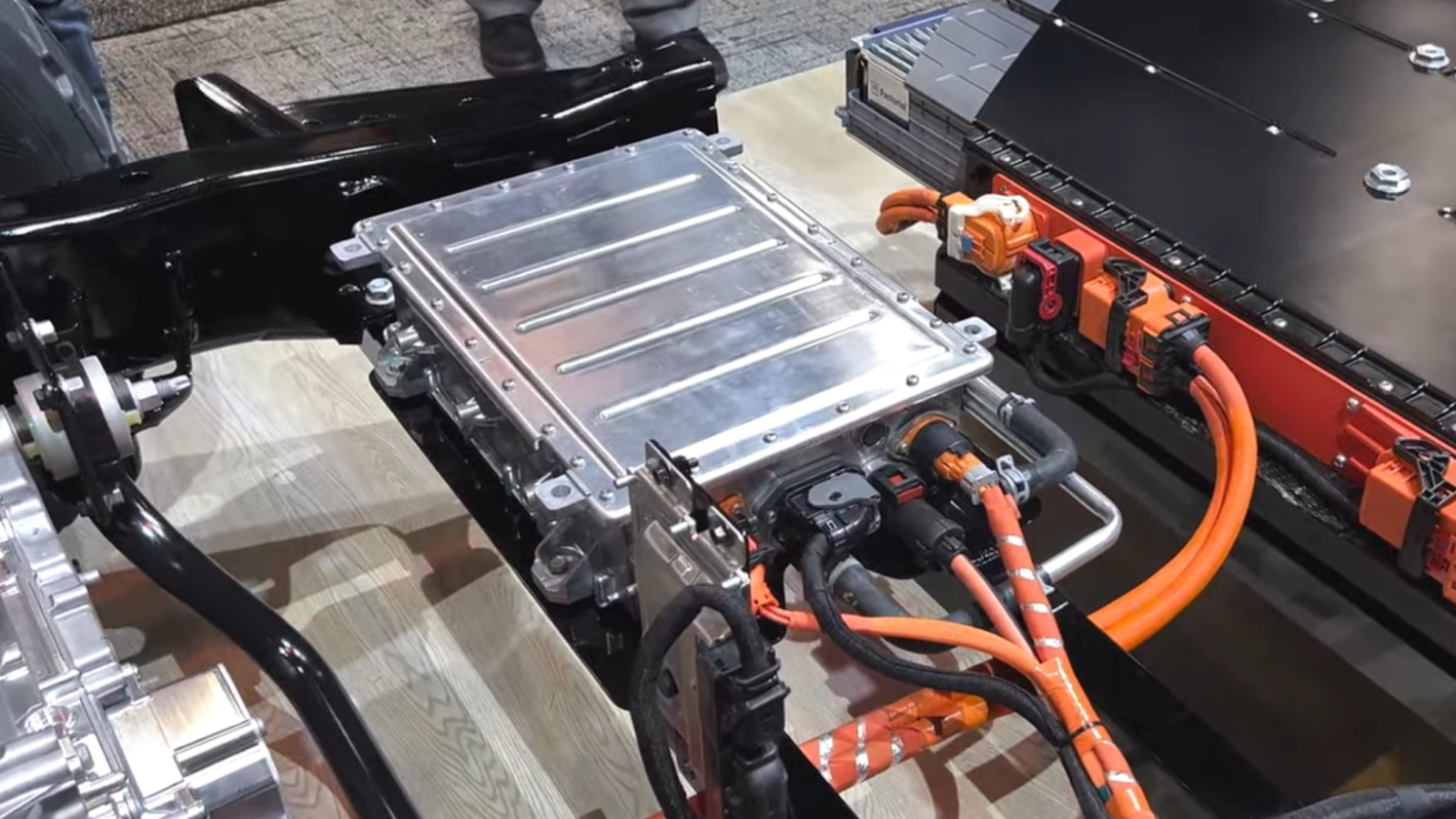 In the model, it looks like the inverter sits right behind the front motor, ahead of where the battery pack should go. Of course, this could change for production, but mounting the inverter right next to the battery pack’s high-voltage terminals seems cromulent. Speaking of the battery pack, STLA Frame will accommodate some huge battery pack sizes, as Stellantis is targeting up to 500 miles of range on this platform. Expect a minimum capacity of 159 kWh with a maximum of over 200 kWh. 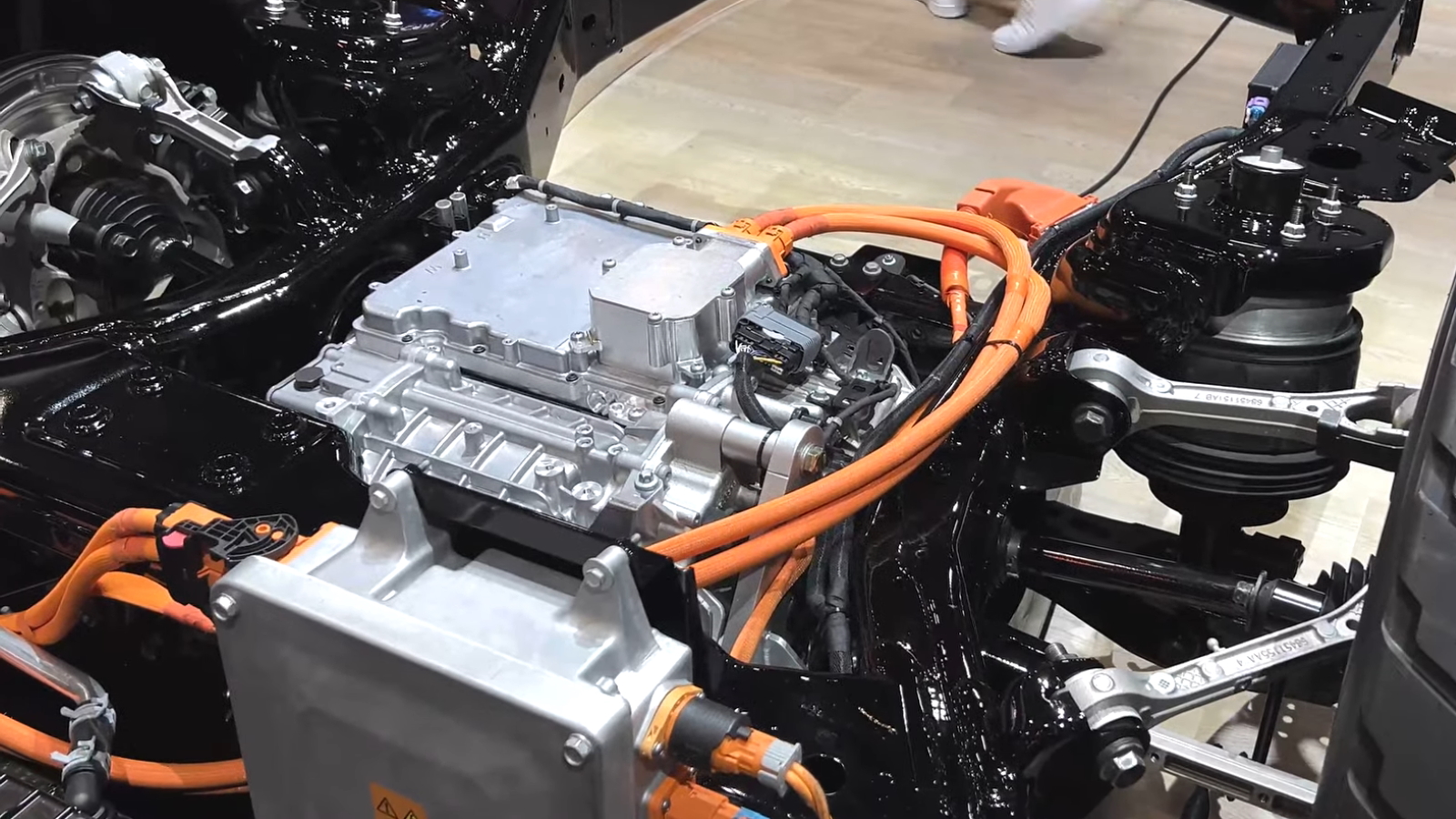 Moving along, let’s check out the rear drive unit. It appears different to the front motor, indicating that the electric Ram 1500 could potentially feature a more powerful rear drive unit for rear-biased all-wheel-drive.

Putting EV-specific stuff aside, let’s talk rear suspension, which is traditionally a live axle on combustion-powered pickup trucks. Of course, hooking an electric motor up to a live axle presents all sorts of unsprung weight and packaging challenges, so automakers are moving to independent rear suspension. Ford decided to use massive massive trailing arms on the F-150 Lightning, but Stellantis is taking a more delicate approach. What we’re looking at here is a five-link rear suspension setup that should be generally familiar in concept to BMW 3-Series owners. 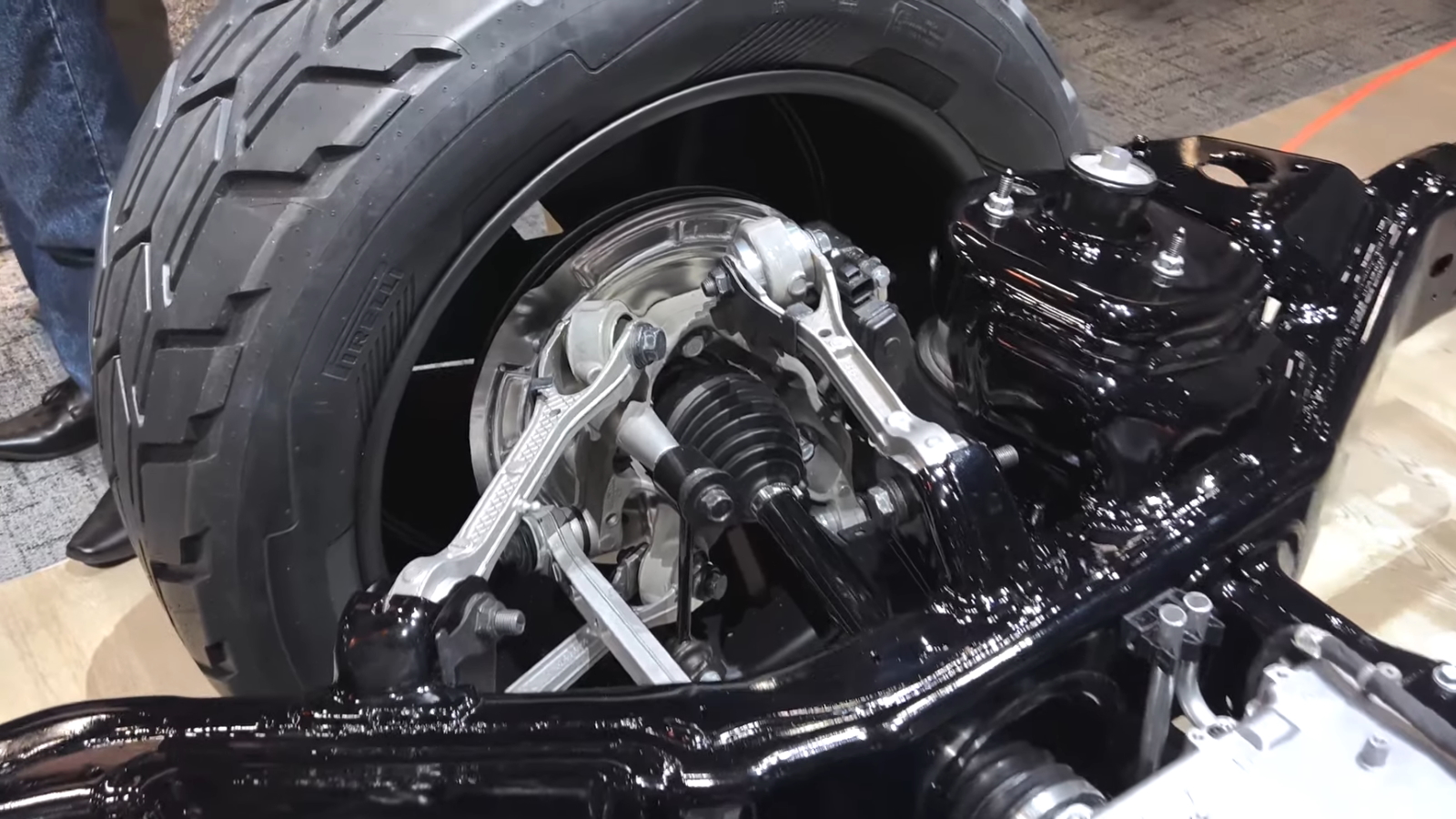 In this case, we have a thrust arm, a semi-trailing arm, an upper control arm, a camber arm, and a track link all working together in harmony. All but the camber arm are aluminum parts, and the track link sits ahead of the CV axle. While this setup will likely pay dividends in ride quality, five-link upkeep can get expensive as bushings start to wear out. 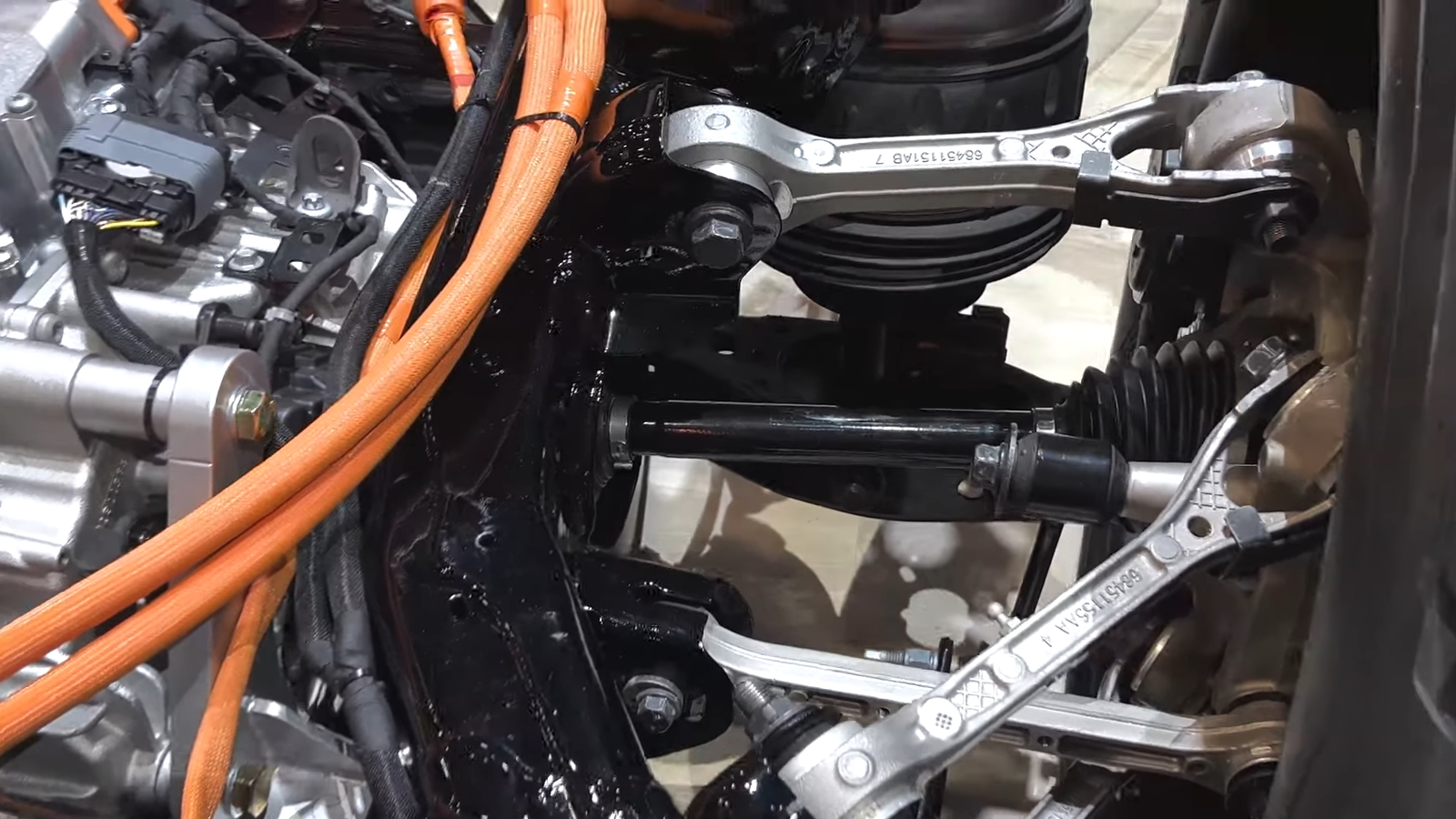 It’s also worth noting that this example of STLA Frame uses air suspension which appears to employ a spring-over-damper design. It’s a space-efficient setup that’s a departure from the divorced spring and damper setup Ram is currently using in light-duty trucks, but Ram’s experience with air suspension should play to its advantage.

Overall, there’s lots to like about Stellantis’ STLA Frame architecture. From the multi-link rear suspension to the smart front motor packaging, Ram’s future bones look promising. Expect to see STLA Frame underneath electric pickup trucks in 2024 when we get a glimpse at a production-spec Ram EV.

What Do You Think About The Upcoming All-Electric Jeep Wagoneer S?

Thomas is a Nu Rave-blaring, heel-toe downshifting, maple syrup-swilling, chassis-geeking, junkyard parts-hauling, floppy-haired scenester who's been writing about cars since college. His current ride is a 2006 BMW 325i with the six-speed manual gearbox. Instagram: @thomas.hundal Twitter: @thomashundal
Read All My Posts »
PrevPreviousFord Made A Version Of The Tempo That Actually Lived Up To Its Name: Holy Grails
NextLearning A New Language From A Vintage Bubble Car: Comment Of The DayNext