If you’re an astronaut heading to space on a NASA spacecraft, your chain of transportation that starts with you waking up in some space groupie’s bed has been essentially the same since the 1960s: by foot to your personal car; by car to the Kennedy Space Center; by Astronaut Transfer Van to the rocket; and by rocket to the final frontier. NASA is in the process of finishing its new launch vehicle and spacecraft, the SLS and Orion, and it now looks like the next-to-last step in that chain of transportation is getting an update, too. Yes, there will be a new Astronaut Transfer Van, and the troubled EV startup Canoo has won this lucrative government fleet contract. For a fleet of one.

That one vehicle, the Astronaut Transfer Van (ATV), is really a very visible symbol of NASA, even if it doesn’t get the attention of, you know, lunar landers and space shuttles. But it’s always there, getting those astronauts from the Operations and Checkout Building to the launchpad nine miles away.

The first one wasn’t so much a van as an REO tractor truck pulling a trailer outfitted to be the transfer van. This was pretty enormous, considering the early flights of Mercury had only one astronaut, and Gemini just had two.

In the Apollo era, there was a modified Clark-Cortez motorhome, which was an interesting front-wheel drive design, using engines from all of the Big Three during the 15 or so years the vans were built.

Apollo capsules only carried crews of three; when the shuttle era came around in the early 1980s, the need for a larger ATV became clear since the space shuttle orbiters could have crews as large as eight. So a new ATV appeared in 1983, this time made from a sleek aluminum-skinned Airstream Excella motorhome. 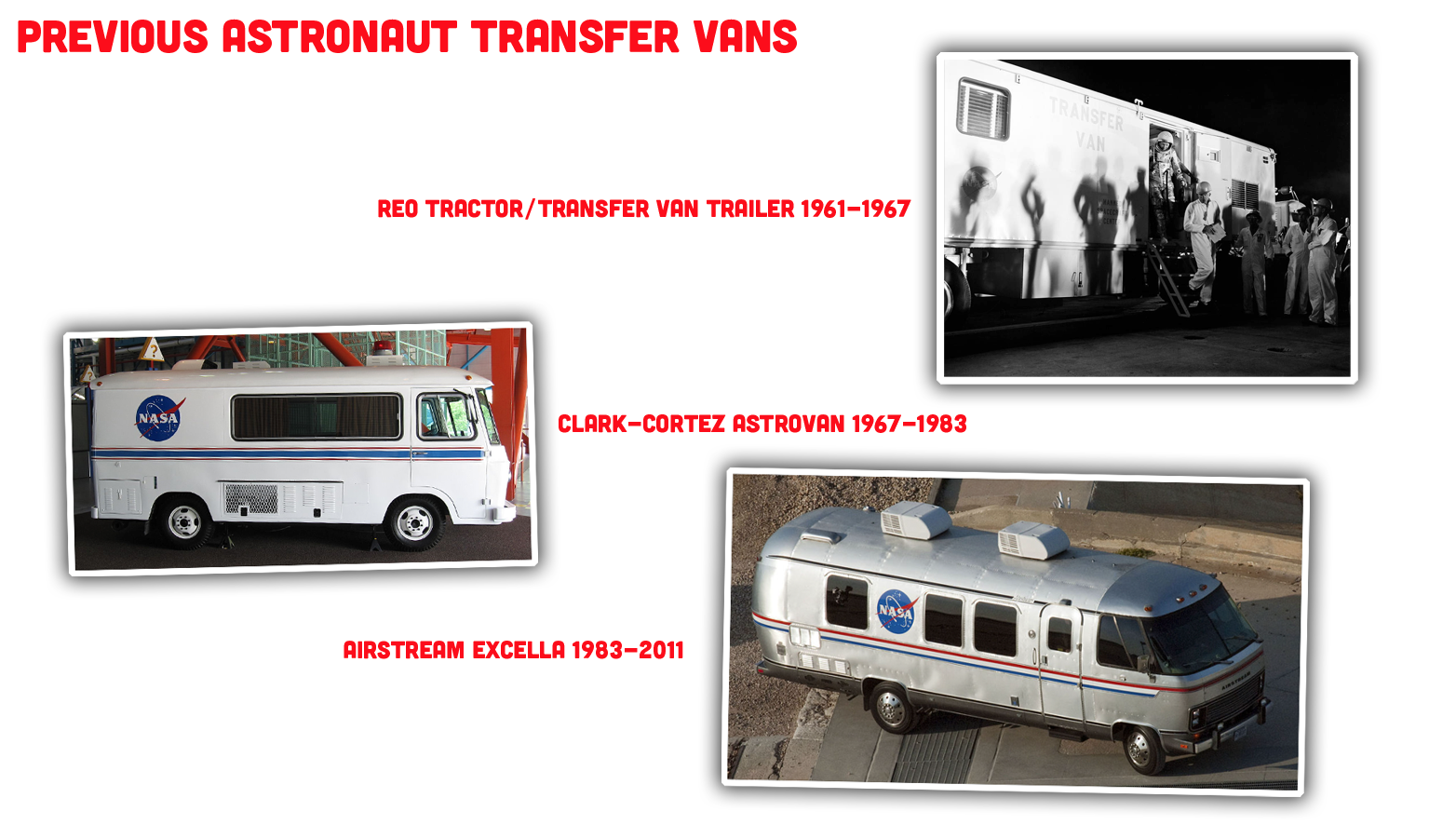 Boeing has a converted Mercedes-Benz Sprinter to take up to eight people to the launchpad for its CST-100 capsule missions, but there have yet to be any crewed missions for that capsule, so it has yet to be actually used.

Back when I worked for That Other Website I covered Canoo a good bit, and I generally really liked its one-box EV vans and their useful-looking cabover pickup truck designs. In fact, a front pickup bed idea I had years ago was being used in Canoo’s defense against a lawsuit from EV maker Bollinger last summer.

Unfortunately, Canoo has had a bit of a rough patch lately, with a deal with Hyundai falling through and an SEC investigation complicating things, but it appears the company has gotten its feces together enough to convince NASA they can build them one electric van, at a cost of $147,855.

The requirements for the van, which would be the new Astronaut Transfer Van, are really pretty modest for a modern EV (it has to be an EV because NASA wants a zero emission vehicle): It must seat nine (including driver), have a range of a meager used-2013-Nissan-Leaf-like 50 miles, and be able to be used for eight hours a day.

The Astronaut Transfer Van must also have plenty of room for all the bulky equipment and cooling systems and space crap the astronauts will be taking with them into the Orion capsule, and the doors need to be generously sized so a spacesuited astronaut burdened with space hardware and sacks of space groceries can get in and out with ease.

If you look at Canoo’s current lineup, its Lifestyle Vehicle looks too small; the larger version of the MPDV van seems a more likely candidate for the ATV job, but when you consider what NASA’s requirements are (four suited up astronauts, plus a driver, plus three support people) it becomes clear that Canoo’s current offerings may not be up to the task: 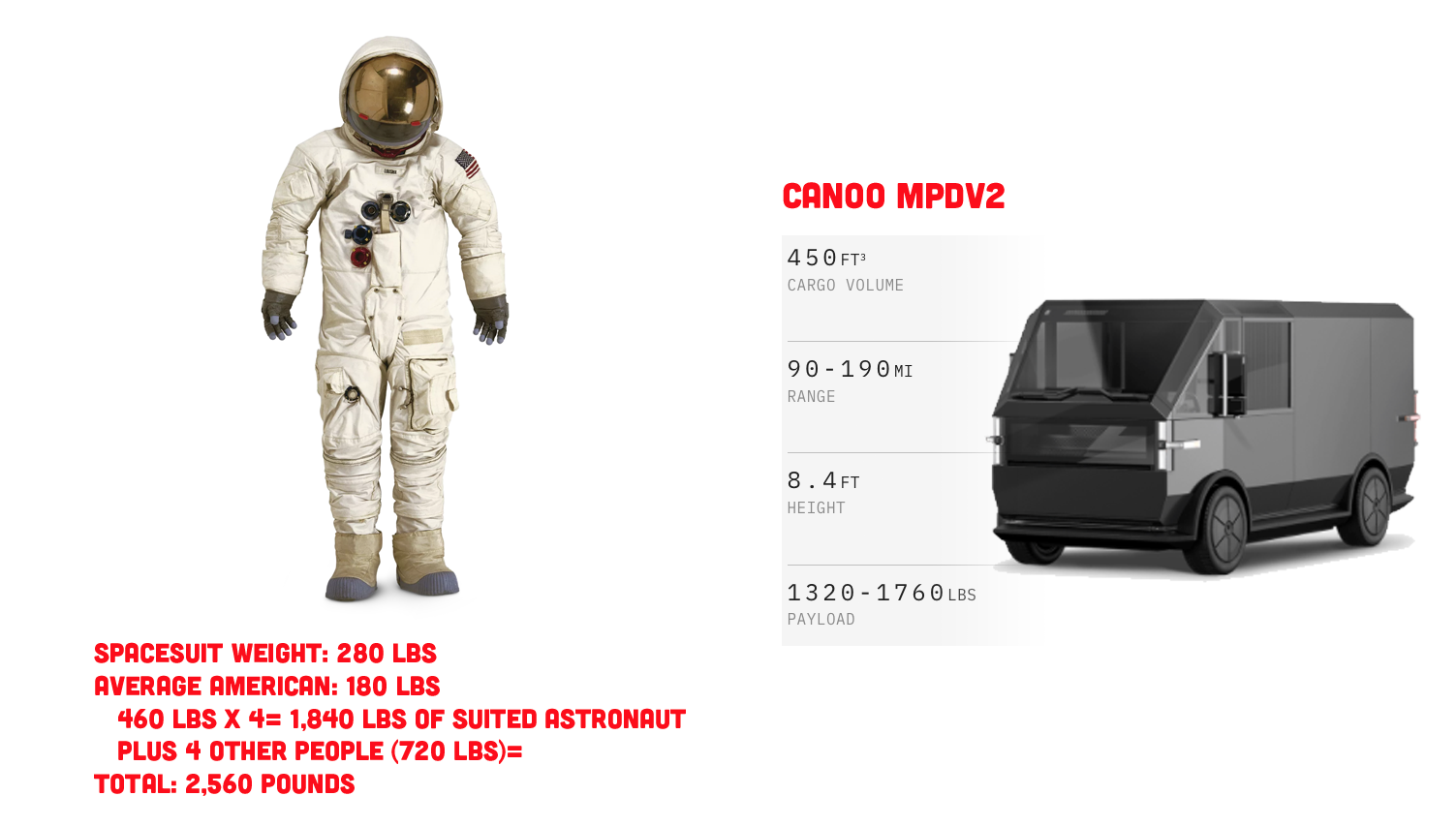 The range and volume seem like they should work, but they’re about 800 pounds shy of the payload needed, and that’s not counting auxiliary equipment. This is based on an average American’s weight of 181 pounds (I rounded down to 180) and NASA’s estimate of spacesuits weighing 280 pounds on Earth.

So, it looks like Canoo can’t just spray-paint stencil the NASA logo on the side of one of its MPDV2 mules and pocket that $148 grand; this will take a bit of upgrading to pull off.

Perhaps because the range demands are so low, the company can get away with removing some heavy battery mass? That’s where I’d start, but, of course, they have yet to call me to ask.

I'm a co-founder of the Autopian, the site you're on RIGHT NOW! I'm here to talk to you about taillights until you cry and beg me to stop, which I absolutely will not. Sorry. Hug? Also, David's friend.
Read All My Posts »
PrevPreviousHere’s The Official Reason Why Some Traffic Lights Are Horizontal And Some Are Vertical
NextWhat A Tesla Model 3 Has In Common With A 1969 Pontiac Grand Prix And A 1947 Cisitalia 202Next