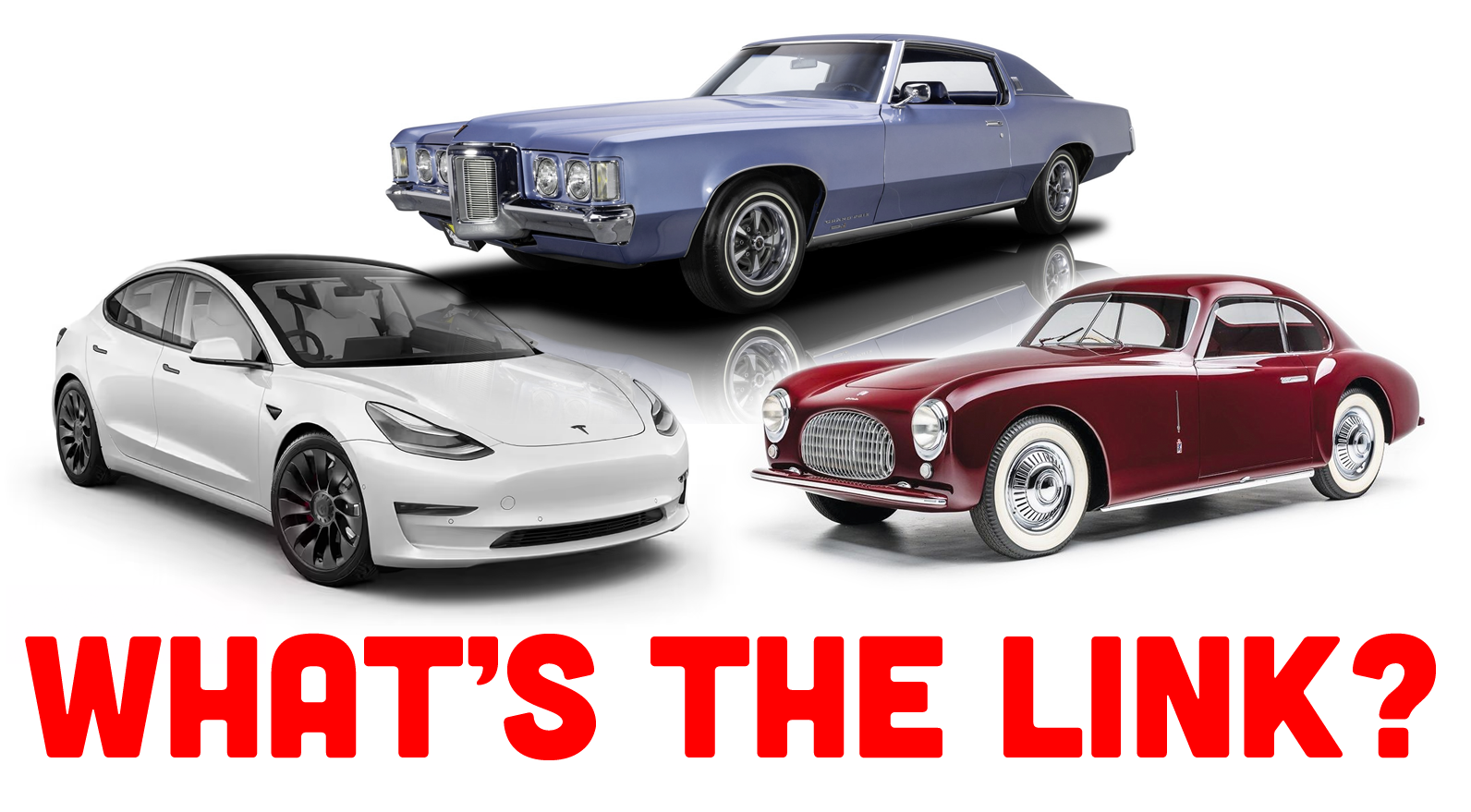 It’s hard to think of three cars that seem to have less in common with one another than these three: a 1947 Cisitalia 202, a 1967-1970 Pontiac Grand Prix, and a 2017-present Tesla Model 3. And yet these three cars, as wildly divergent as they are, have one interesting similarity, and I don’t mean obvious bullshit like four wheels or clear-glass windows. It’s an interesting, stylistic detail — something that an owner of these cars would interact with on each and every drive, and its something that is otherwise quite rare in the automotive world. It’s their shared door handle design philosophy. 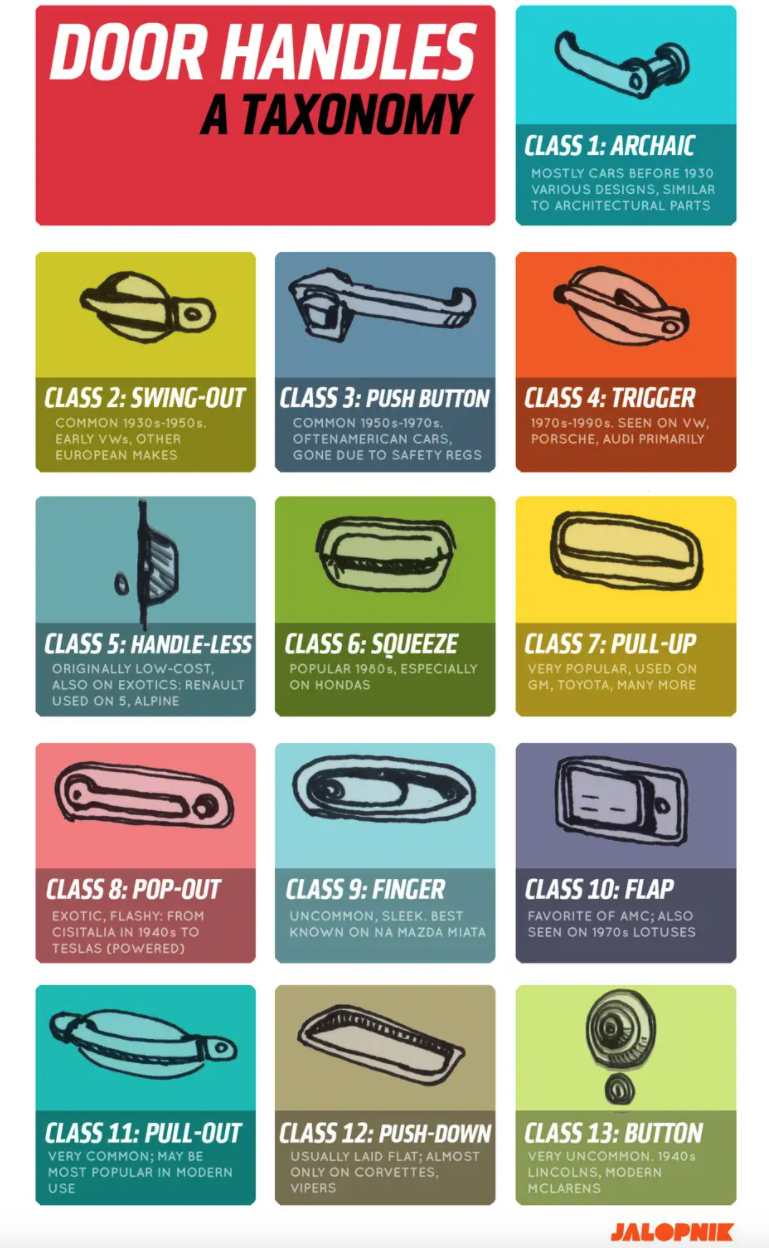 Yes, door handles! One of the most crucial points of human-machine contact on a car, the literal first thing you need to interact with if you want to drive a car, or even just get inside one. Door handles have always been places for carmakers to have some fun with novel designs and clever mechanisms, and the type of design used on these three cars certainly lends itself to a particular sleek aesthetic, though I’m not convinced the layperson really likes the mechanism or method of operation.

According to a classification of door handles I made while I worked for the automotive website/sex cult known as Jalopnik, this particular type of door handle I classified as a Class 8, or “pop-out” style of handle, as you can see on the chart to the right here.

Know the kind I’m talking about? It’s the kind of door handle that actually takes two steps to operate: first, you have to push on one part, and that part could be a separate button, or a section of the handle itself. These are, I should clarify, unpowered, as well.

The act of pushing will then force the rest of the handle to pop out from the car, either by being released via some spring-loaded method, or via simple lever action.

Then, once the handle is freed from its little, usually flush-mounted nook, the handle is pulled, which releases the latch and opens the door.

Honestly, it’s often kind of a clunky motion that requires two steps, where most good door handles manage the task in one. I suppose you can kind of flow the steps into one another, so it’s an easy push-in-then-grab-from-below kind of motion, though every time I’ve used these sorts of handles they never work quite as smoothly as I’d like.

A number of cars use this handle design, but not a large number. Off the top of my head, I can only think of four: the three I mentioned before and the Lexus LC500, which I didn’t make as big a deal of because I just liked the Cisitalia-Pontiac-Tesla triumvirate more. 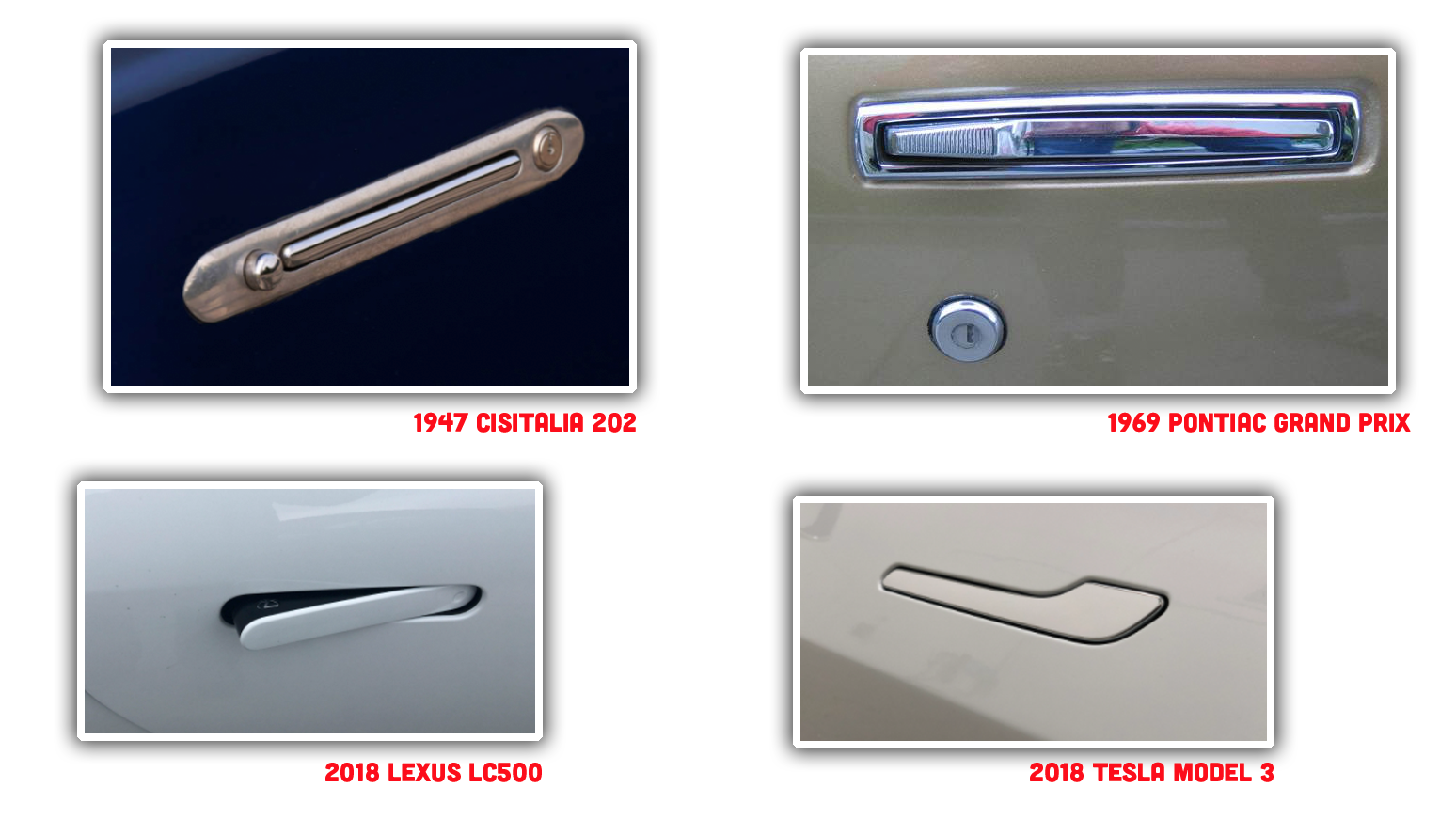 Here’s a couple of these in action. First, here’s Tesla’s take on these, as seen on the Model 3:

The Tesla design, being the most recent, seems to improve a bit on the usual operation of these, since the act of pushing in the larger part to lever out the handle also releases the door latch. It also does sit extremely flush with the car, which looks great and has aero advantages, but if you have to deal with ice, this design could be a nightmare. Tesla actually has a whole section of their owner’s manual just to try to deal with this.

They also have this fun little animation showing how to strategically punch your door to get in when it’s icy:

For comparison, let’s check out how this type of door handle works on a 1970 Pontiac Grand Prix:

GM’s design of this type of door handle uses a protruding, textured section for the push part, and that ejects the handle, which, when pulled, releases the door latch–the opposite of Tesla’s method. This one likely wouldn’t have been great in icy conditions, either, but, as it’s less flush, it’d probably be a bit easier.

The originator (I’m pretty sure–at least this is the earliest, best known example of the Class 8 handle) is the 1947 Cisitalia 202.

If you’re not aware of the Cisitalia 202, you should be. This was an early Pinin Farina design, and can be considered the template of all sports coupés to follow, defining the long hood/short rear deck proportions, and also defining the look of Italian sports cars for at least two decades to come.

Built by hand in limited numbers and using modified Fiat mechanicals, the Cisitalia can really be considered the start of all those incredibly lovely, elegant, and fast Italian sports cars that followed. They’re stunning.

and that car used a button that released the spring-loaded handle, which was shaped with a recessed area in the middle for optimal grabability: 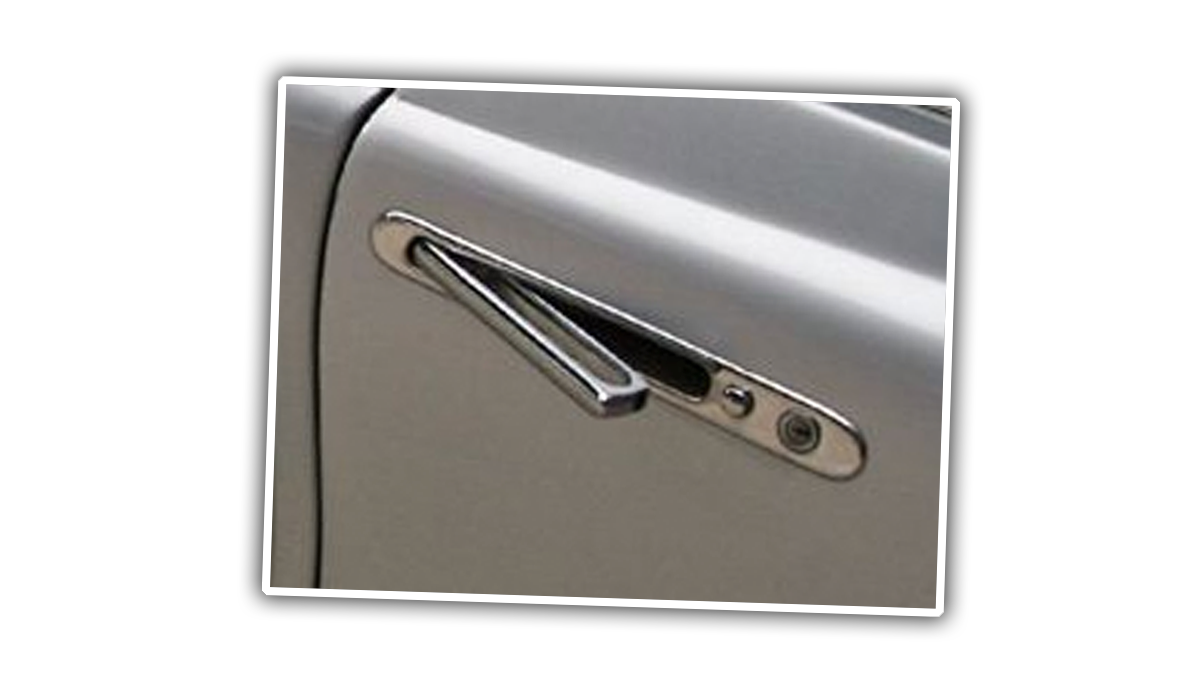 I think you could operate this one-handed with no problem: thumb hits button, fingers grab handle, which is pulled to release the latch. It’s like the other ones, but see how the grab handle swings out from the far end of the door handle, the opposite way of the others?

That’s because in the GM and Tesla versions, the handle and the push-in part are one lever, hinged at the fulcrum–you push in the short end, and it see-saws up the other end, the handle. The Cisitalia uses a button to release the handle, so we get this other approach.

It’s worth noting that GM never went back to this door handle design after the 1969-1972 Grand Prix, even though they had several cars that could likely have conceptually worked with such a door handle, like the Corvette. Instead, they developed the also-odd but I think easier to use Class 12 (go on, look at the chart) push-down handles for Corvettes.

I think these handles are worth discussing because they’re one of those automotive designs that is seductive in the ways it looks and feels (and of course there are the aerodynamic advantages), but in actual, everyday use, dealing with everyday factors like weather, gloves, full hands, etc. they usually fall short.

Also, the fact they made a comeback on a car with as much popular attention as a Tesla is significant, too.

So, I encourage all of you to really think how you feel about these Class 8 door handles. Are their sleek looks and aero benefits worth the drawbacks?

I’m not certain, but I encourage an animated discussion about this in the comments, perhaps even leading up to actual threats and maybe some tears because, you know, this is a big deal.

(Thanks to Hans, our Bishop of Automotive Ephemera, for the topic!)

I'm a co-founder of the Autopian, the site you're on RIGHT NOW! I'm here to talk to you about taillights until you cry and beg me to stop, which I absolutely will not. Sorry. Hug? Also, David's friend.
Read All My Posts »
PrevPreviousEV Startup Canoo Wins Lucrative NASA Contract For One (1) Van. Let’s Dig Into Astronaut Transfer Van History
NextSomeone Is Offering Me The Perfect Jeep Cherokee XJ Two-Door Manual But I Don’t Know If I Can Buy ItNext