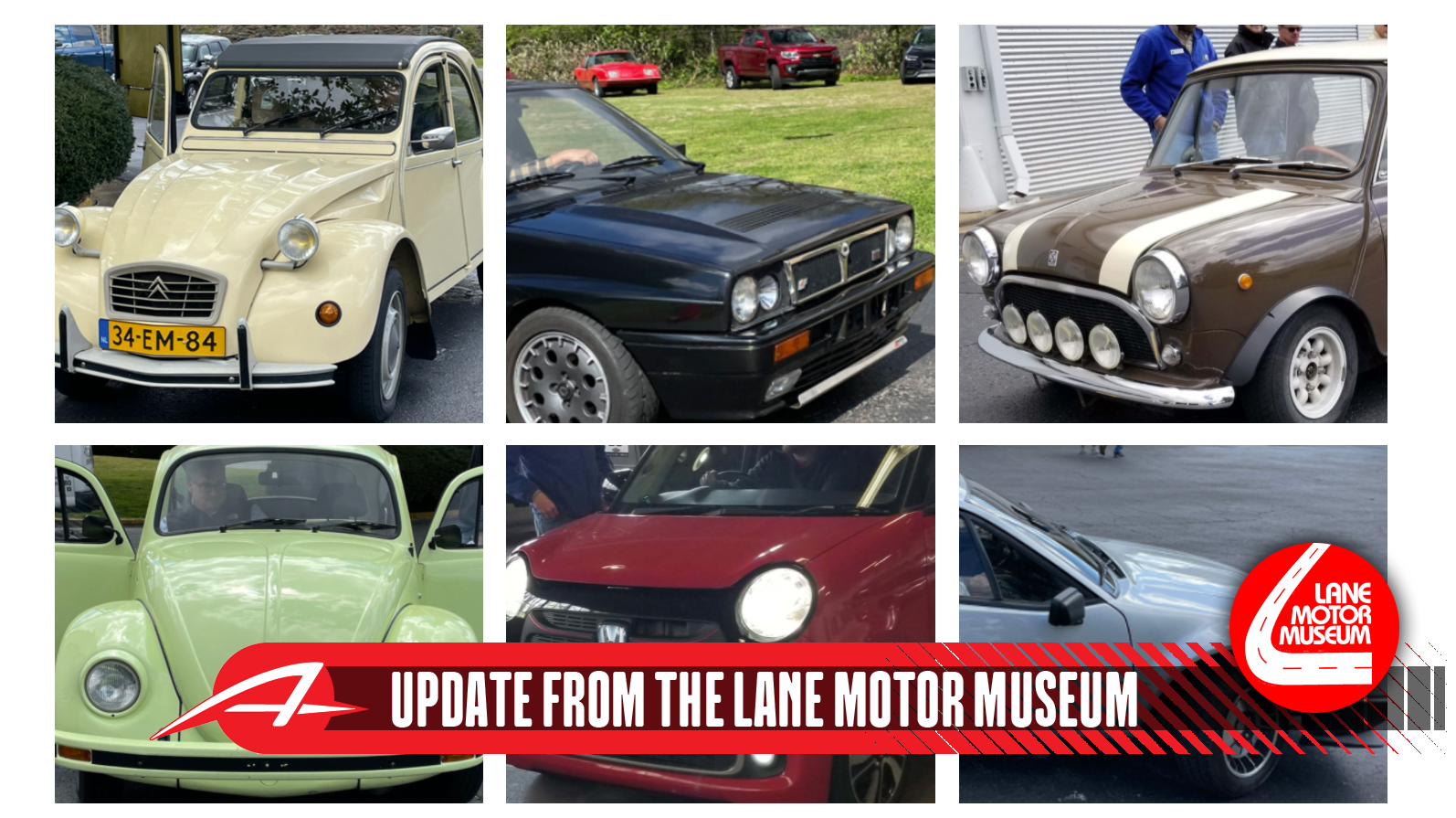 Every year here at Lane Motor Museum, we thank our museum volunteers for the hard work they do with a unique opportunity: They get to drive a selection of museum cars around the block. This accomplishes a couple of things: It exercises the cars, and it helps the volunteer connect with the collection in a very real way. When a volunteer is talking to museum guests about a certain car, they can not only talk about its history, but how it drives and feels, and how fantastic or terrible it is.

I thought it would be fun to offer a few driving impressions using our volunteers’ comments. Due to COVID, this past Saturday was our first volunteer appreciation day in two years. Because I have a few new volunteers, I selected eight cars that were more mainstream — well, mainstream at Lane Motor Museum: a Mini, a Citroen 2CV, an air-cooled Mexican-built late Beetle, a modern JDM car, and a few others.

Think of it like a wine tasting, with less spitting, and more eau de clutch wafting in the air.

First, we begin the morning with a Bring-What-You-Got car show on the museum side yard:

When everyone has arrived, I have quick driver’s meeting, and I give them a route to follow (“It’s much easier to pull right out of the parking lot and keep turning right, rather than have to cross traffic in an unfamiliar car.”). I ask that when they return, they leave the car running, in neutral, with the brake engaged to save the starters. Then I hand out keys, and the staff gives each driver a little lesson on turn signal location, shift patterns, hand brakes, and other quirks they need to successfully navigate back to the museum. It’s organized chaos, but for weird car nerds, this is the highlight of the year. 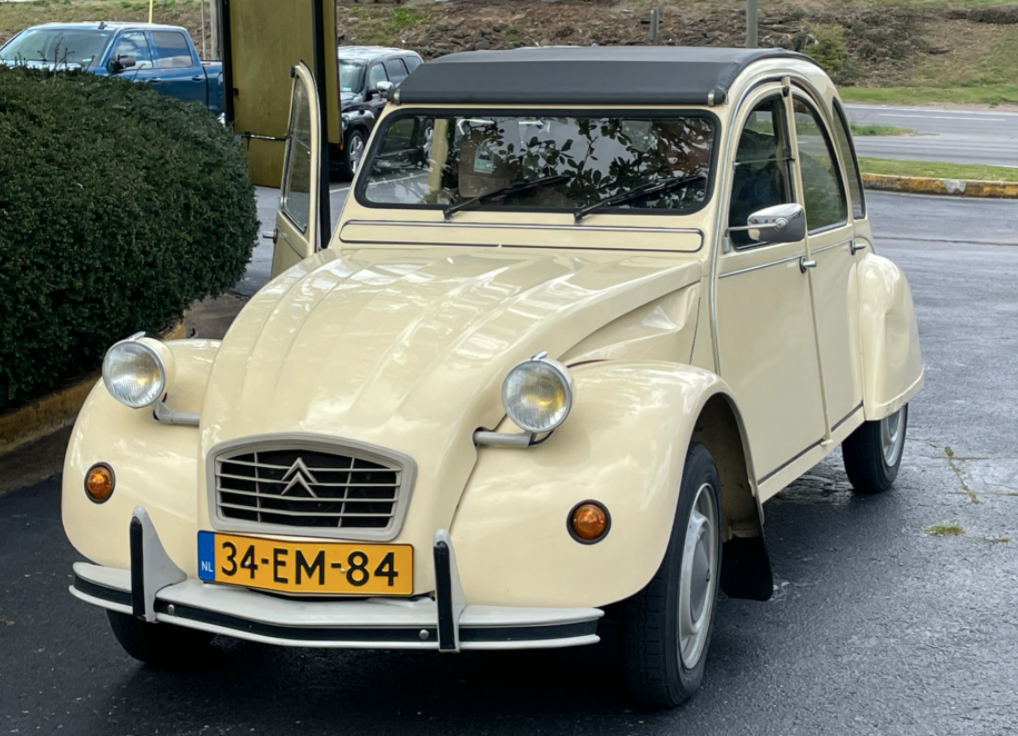 This is the same 2CV from the last restoration shop update.

While the 2CV is an engineering masterpiece — so simple yet so well designed — many of the volunteers’ comments centered on the “umbrella” style shifter sprouting from the dash: 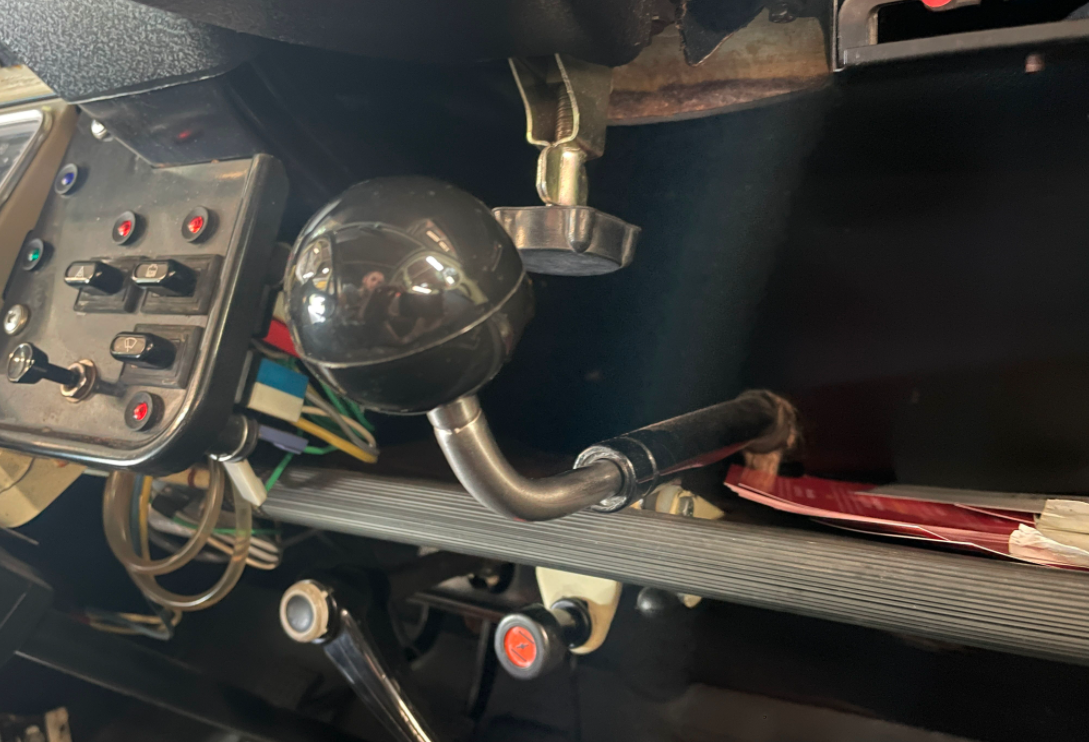 Shifting gears in a 2CV is more of a twist of the wrist, rather than a rowing motion. Here’s a look at how a simple linkage turns a regular stick shift — located a few feet ahead of the dash — into this odd umbrella shifter. 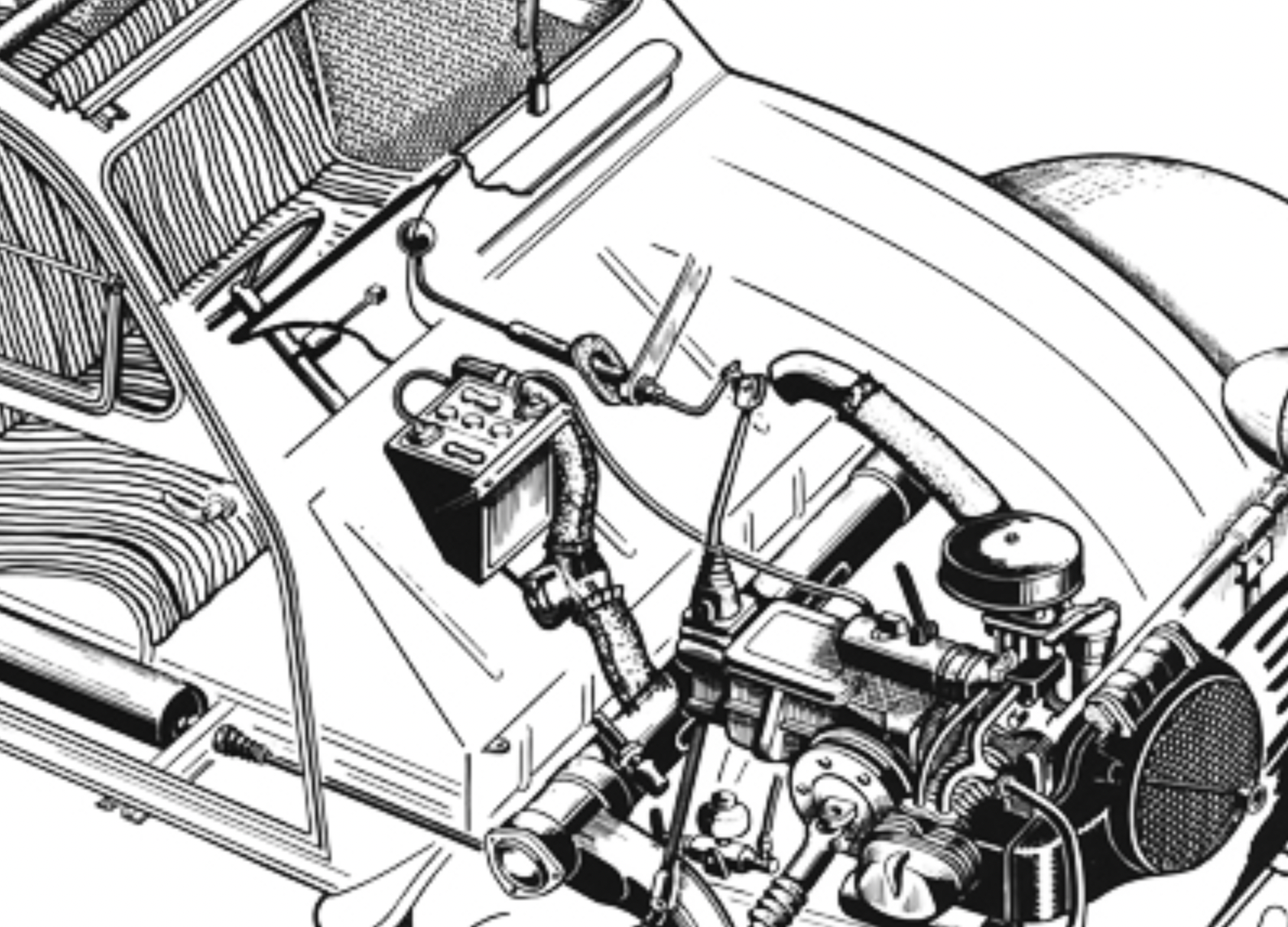 Even though there is a pattern above the speedometer, many volunteers found difficulty finding first, but they all eventually fell in love with the Deux Cheveax. Some comments:

“Sounds like a weed eater, but is a blast drive!”

[Editor’s note: Some background on the 2CV: This was France’s people’s car–well, really, France’s peasants’ car, as it was originally designed to motorize France’s large rural population, hence the famous 2CV requirement to be able to carry a basket of eggs over a plowed field without any breaking–hence the soft, rolling suspension mentioned.

Prototypes were hidden during WWII, but afterwards this un-styled yet oddly appealing little workhorse went on to become a huge success, being built in huge numbers up until 1990. –JT] 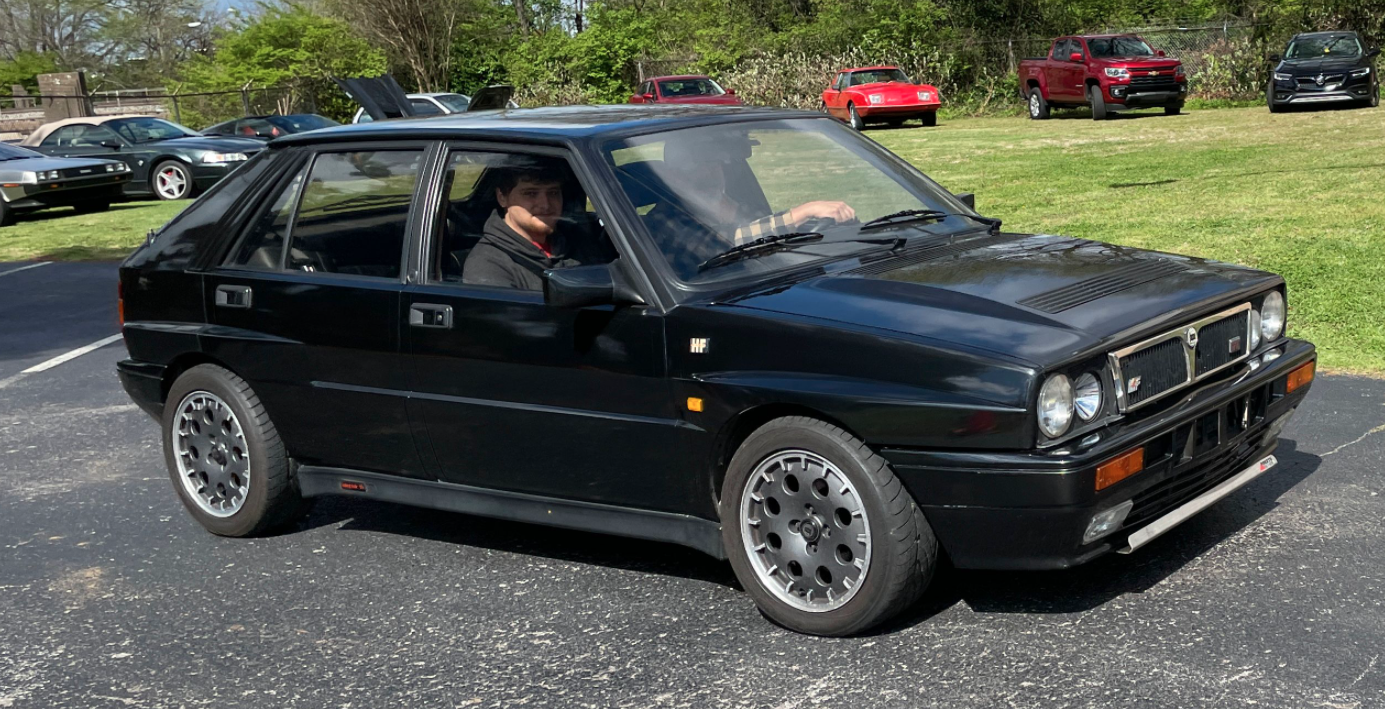 Italian carmaker Lancia introduced the rally-inspired HF, or High-Fidelity, variant of its humble Delta hatchback in 1987, followed in 1989 by the even hotter Integrale version. The 16-valve, 227 bhp turbocharged engine, coupled with four-wheel drive, made this the overall favorite. Some notes from drivers:

“Wow, once the turbo kicked in, I was really surprised!”

“This is my new favorite car in the collection. Everyone must add a Delta Integrale to their must-drive list.”

[Editor’s note: A little background on the Lancia Delta Integrale HF: Of all the hot hatches, in some ways this may be the hottest–maybe not in raw power, but in realization of the Hot Hatch ideal. The basic Lancia Delta was a Giugiaro-designed economy hatchback of the usual design, FWD, transverse engine MacPhearson suspension, the usual. Lancia transformed it into a Group A rally car with all-wheel drive, and it cleaned up.

So, they took their rally car and worked it into the street-ready Integrale HF, with AWD and 182 hp. Later 16 valve versions had even more power. This thing is a hot hatch icon. –JT] 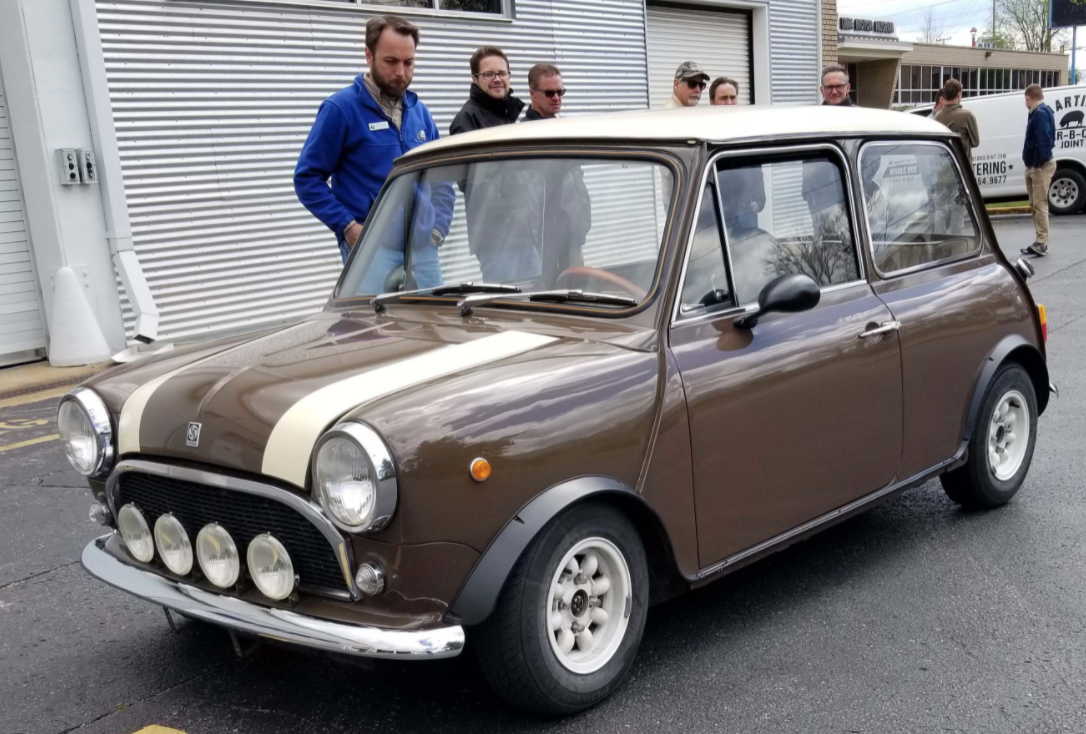 Innocenti was mainly known for its Lambretta scooters until the company began production of a license-built Austin A40 in 1960. Innocenti built and sold about a dozen different car models under license during its automobile production phase, but the Mini, first on sale in 1965, was by far its most popular car.

The body, Hydrolastic suspension [this is a fascinating suspension setup, and we may have an article about on here at some point–JT], and even the 998cc Mark II engine were holdovers from the British version. Otherwise, Innocenti used locally sourced glass, different wheels, electrics, lever door handles, heaters, the three-instrument binnacles, and distinctive grilles.

Everyone commented on the Mini’s spongy brakes. Otherwise, most of the comments on this car involved the bus-driver like position of the steering wheel:

“While it handles well, the driving position just feels off to me”

“There is a deceptive amount of room in this car!”

“You really feel every bump in the road in this thing” (another common Mini complaint).

[Editor’s note: Innocenti was an Italian company that built Lambretta scooters and a number of cars under license, mostly from British Leyland. The Mini was, of course, an incredibly popular car, and building left-hand drive versions in Italy for their market made a lot of sense.

The company was bought by British Leyland in 1972, but despite strong sales, BL somehow botched it up, and sold the company to DeTomaso in 1976. Innocenti developed their own re-bodied Mini, styled by Bertone, and later partnered with Daihatsu. They even did the final assembly for the Chrysler TC by Maseratti!–JT] 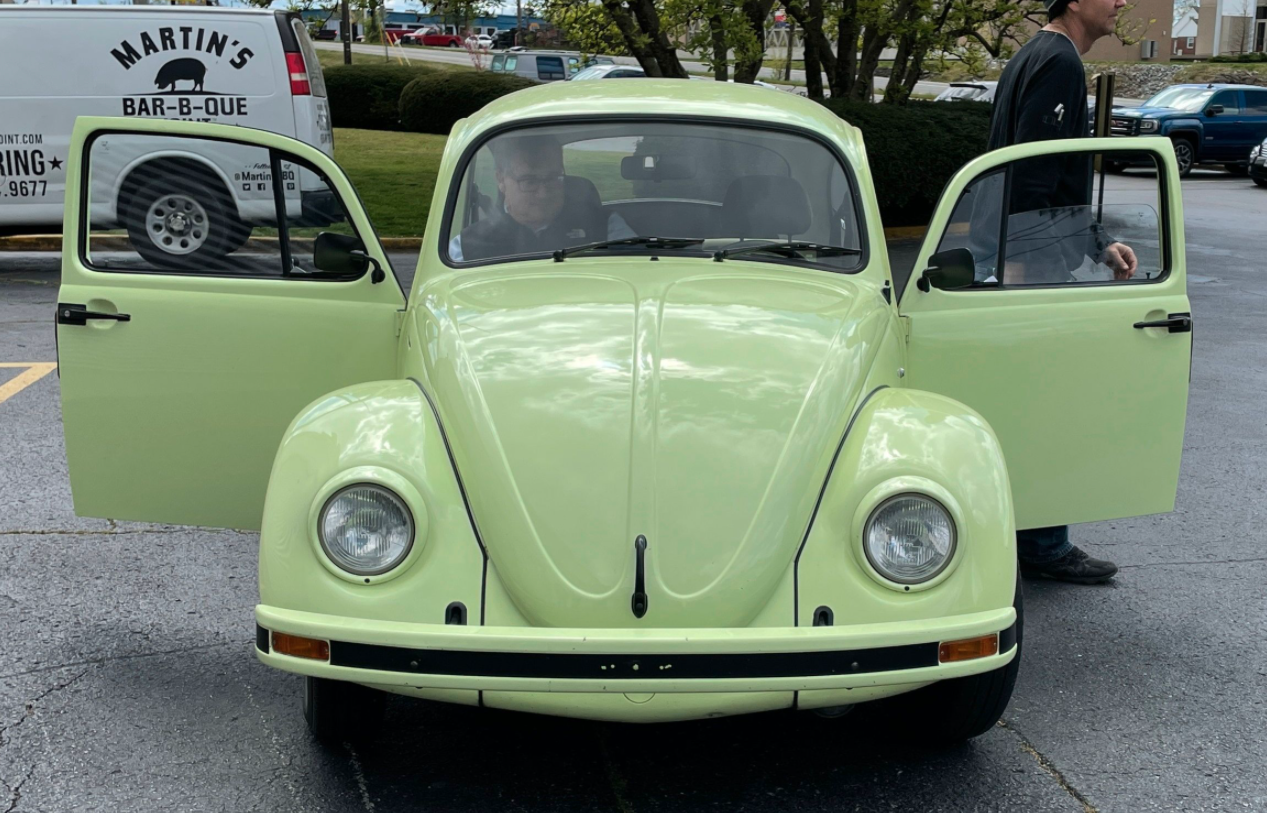 This Mexibeetle was the nostalgic winner of the day. “These comfy seats feel they are from a MkII Golf. Very nice!” I heard. “That engine note and door thud brings back memories!” said another. “This reminds me my old air-cooled Beetle, but this runs waay smoother” (I concur….that Digifant fuel injection makes a big difference). 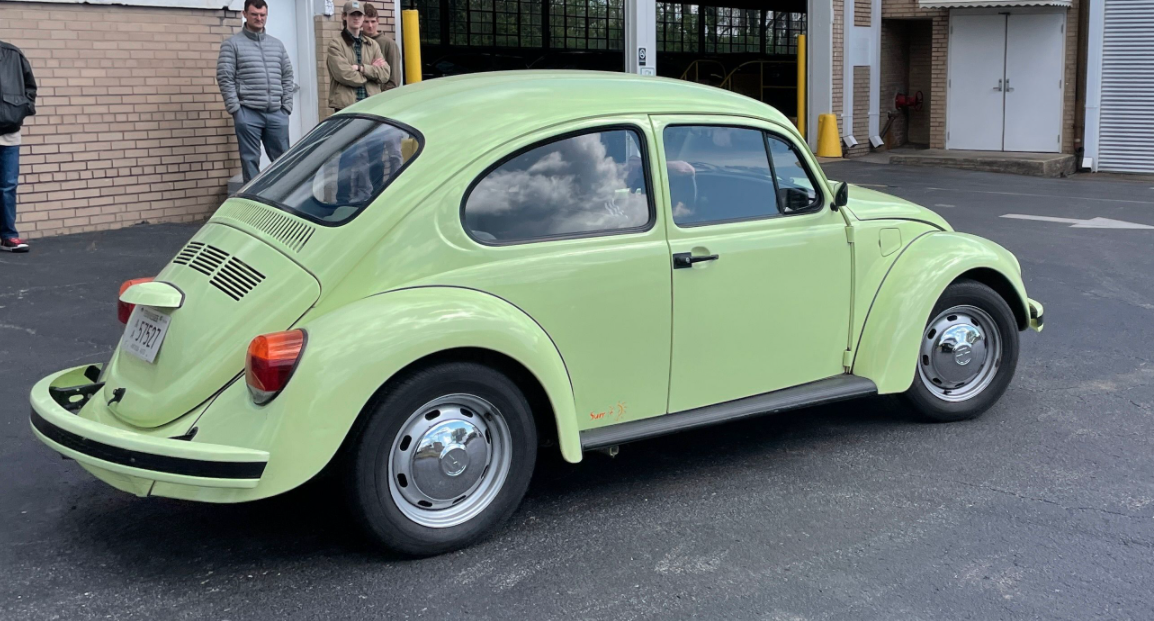 [Editor’s note: Volkswagen introduced Beetles to Mexico by entering three in the 1954 Carrera Panamericana race, and the fact these three little cars finished that grueling race is what made Mexico adopt the Beetle, or Vocho, as their own. They were built in Mexico from 1961 all the way to the end of global production in 2003, and were hugely popular cars, with seemingly every family having one and making up the major taxi fleets.

This Mexican Beetle is from the next-to-last year of production and shows a lot of the very late Beetle traits: painted trim that was once chrome, simplifying and deleting unnecessary features like the useless, rust-trap flow-through ventilation system, and adding things like very useful fuel injection.–JT] 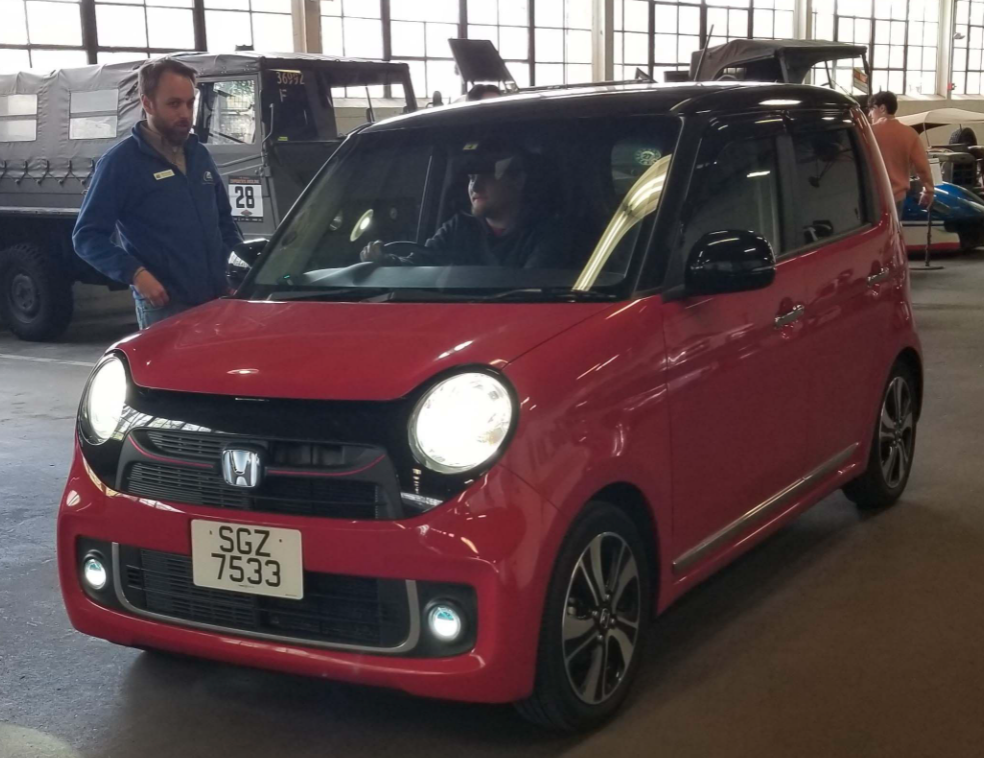 This modern iteration of one of Honda’s iconic kei cars is right-hand drive, but its 658cc turbocharged engine is coupled to a CVT. Driving a N-One is a great way to get comfortable operating a right-hand drive car in a left-hand drive country. Also, since this is a JDM imported car (the museum has a show-and-display exemption for it), the N-One factory navigation hilariously thinks it’s still in Tokyo. 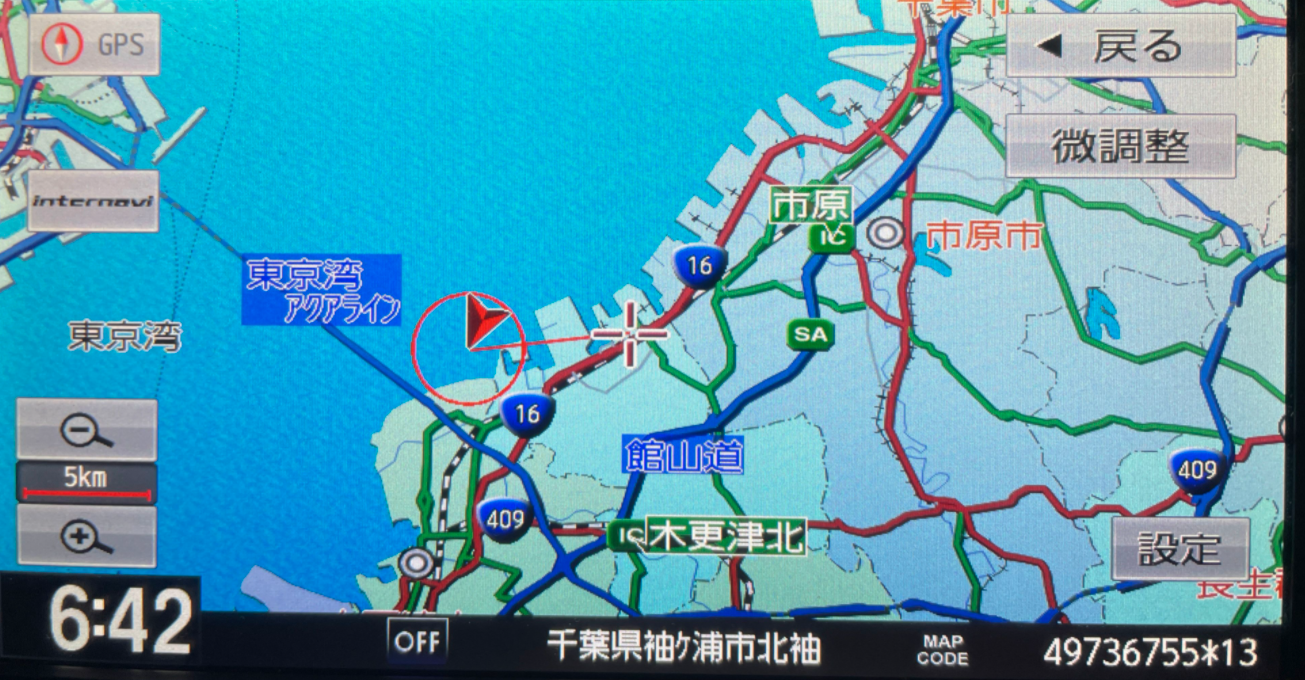 “Driving on the ‘wrong side of the road” is one thing…being a passenger in a RHD car is also quite an odd feeling!”

[Editor’s note: These Honda N1s are a modern re-interpretation of one of Honda’s first cars, the N360. These are very cool modern Kei-class cars (that means they have a maximum engine size and output of 660cc and 64 hp, and must meet strict size restrictions) and it shows the incredible packaging that many Kei cars have, maximizing every bit of interior volume.–JT] 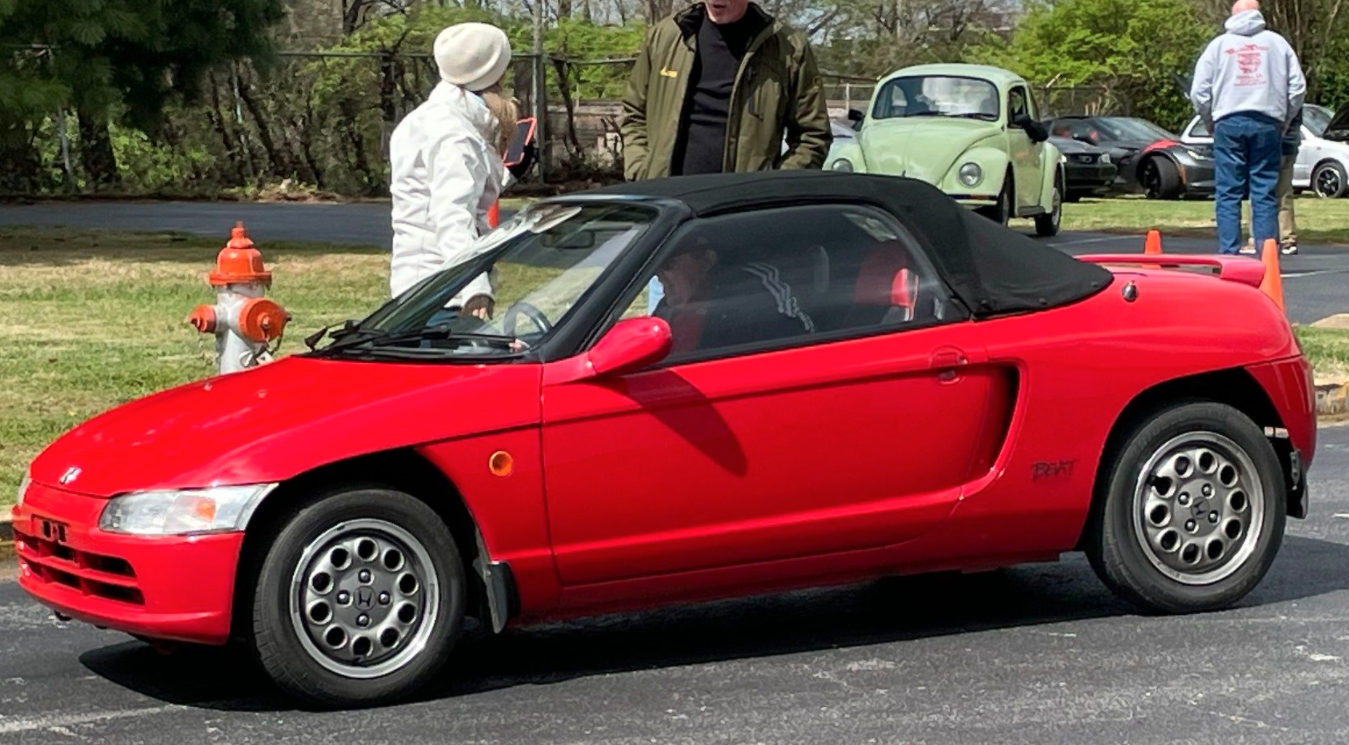 This cute Kei car convertible was the only right hand drive manual transmission in the selection.

“Great handling, and peppier than it looks.”

“NOT designed for taller folks!”

“Right hand drive and manual transmission means you have to concentrate a little harder”.

For those who have not driven a right-hand drive car, the turn signal stalk is to the right of the steering column, just as it is on a left-hand drive car. Everyone, without fail, turns on the wipers while executing a turn for the first time. It’s just muscle memory. The shift pattern is also the same as on a left-hand drive car (because the gearbox is in the same place), so first gear is furthest away from the driver. It takes a little practice.

[Editor’s note: The Honda Beat is a Kei-class sports car, which is a very fun idea. Though the Kei class is usually thought of as being practical city cars, a number of companies have built fun sports cars that meet the Kei requirements, and the Honda Beat is one of the most popular of those. A little RWD mid-engined roadster, weighing about 1675 pounds and having novel engine features like a separate throttle body per cylinder, these things were just fun. Perfect for those who find Miatas too bulky.–JT] 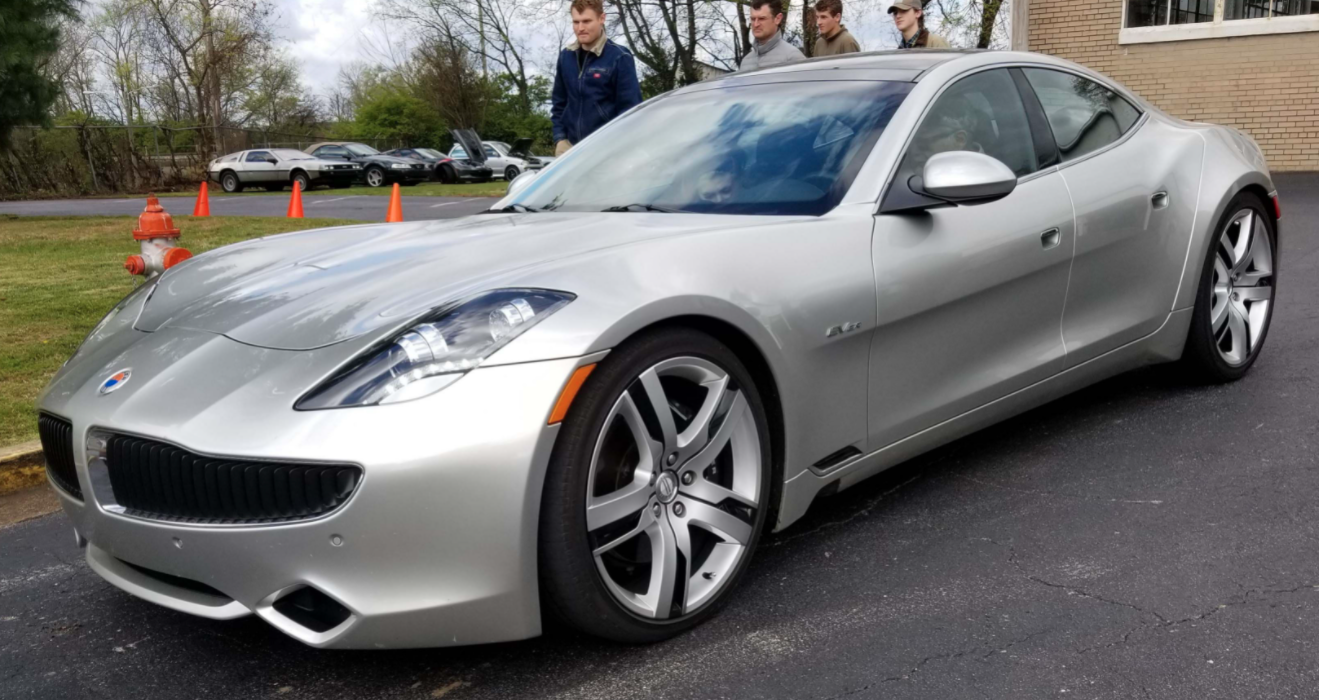 This California-designed, Finnish-built luxury plug-in hybrid has a sexy body wrapped over its hybrid drivetrain and batteries. Therefore, its cabin is rather cramped, to say the least. I also warned the volunteers of Jason’s test of the Karma’s power tilt steering a few years ago. The motor is really strong, overly so, and could crush a driver’s legs if the little joystick control ever got a mind of its own (why is this motor so powerful?).

The majority of the museum volunteers loved the Karma, mostly for its exterior styling:

“When can I take delivery!?”

“The infotainment on this thing is atrocious.” (I cannot agree more)

[Editor’s note: The Fisker Karma came out in 2012, and was usually thought of as a competitor to the then-new Tesla Model S. The Karma wasn’t a battery-electric, though–it was a plug-in hybrid that used a GM Ecotec inline-four engine as well as two 161 hp electric motors. It was quick and had striking styling, but the tiny interior space and the crappy build quality made it a failure. It lived on, sort of, as the Karma Revero, which was built in low numbers from 2017-2020.–JT]

Introduced in 1972, the Renault Alpine 310 was France’s cheaper, more practical answer to the Porsche 911. In 1976, the fiberglass-bodied 310 received a PRV V6 [that’s the Peugeot-Volvo-Renault engine used in the DeLorean, among other cars], which added some much-needed giddy-up.

“This is definitely a car whose looks match its performance” (unlike, say, the Fisker Karma).

“The pedals are really close together…I should have taken off my shoes!” (Nope… grody!)

Check out the Alpine’s pedal box. As with many sports cars, the wheel well intrudes far into where your feet can go comfortably. This set up also encourages heel-toeing, although the consensus was that no one knew how to comfortably do that for today’s drive.

[Editor’s note: These Alpines are fascinating cars, and almost unknown in America. It was Renault’s halo performance car, and the rear-engine layout made many consider it as France’s Porsche 911. While it never sold in enough numbers to really have been a 911 competitor, these still have a lot of appeal and a following, especially in their native France.–JT] 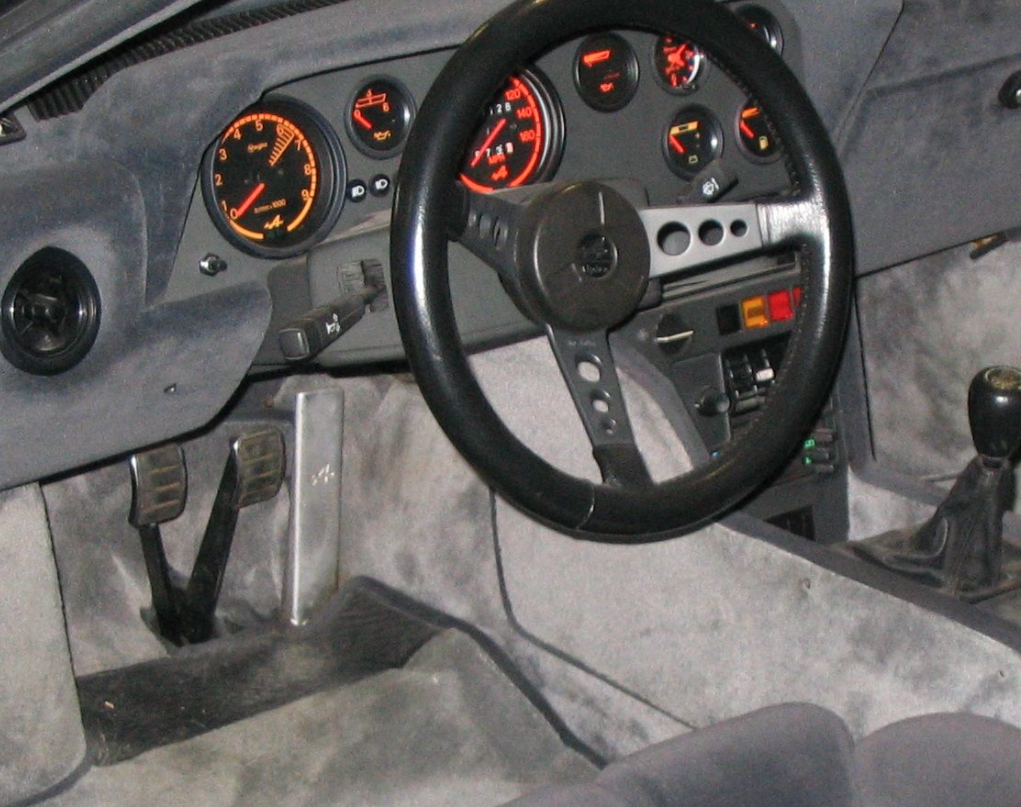 Oh, and everyone had catered barbeque for lunch (it is Nashville, you know). Our small-staffed museum relies on our wonderful volunteers for help on busy days. They interact with guests, ensure guests don’t touch the cars, and point guests to the bathrooms and vending areas (that’s our number one question, no joke).

They are invaluable, and this annual appreciation event is the least we could do for them.

Read All My Posts »
PrevPreviousThe Honda Insight Gets Killed Off For The Third Time In Two Decades
NextWhich Of These Two Deeply-Flawed Jeeps Should I Convert To Electric?Next