Facebook-f Twitter Instagram Rss
Menu
Menu
Home » Which Of These Two Deeply-Flawed Jeeps Should I Convert To Electric?

Which Of These Two Deeply-Flawed Jeeps Should I Convert To Electric? 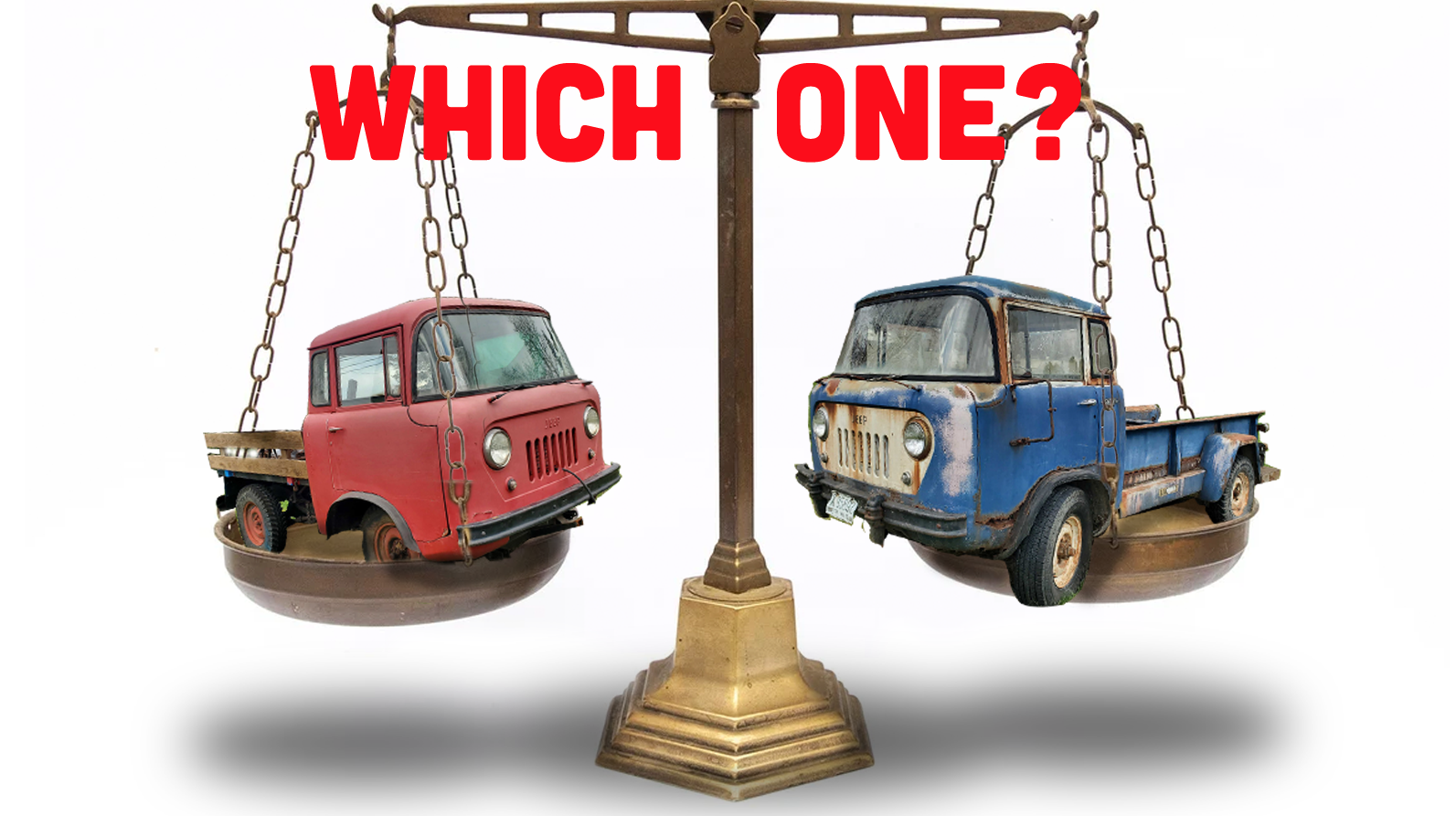 “Stolen” Jeep or rusted-out Jeep — which should I convert to electric power? That’s the question that we — collectively as Autopians — must face today, for I have been flip-flopping on the decision for months. Now I come to you for guidance.

I’ve been wrenching on junky Jeeps for a while now, rebuilding AMC 360 V8 engines, replacing cracked cylinder heads on AMC straight-six enginesc, tuning carter W-0 carburetors on Willys Go-Devil motors, replacing synchros and bearings in manual transmissions, extracting broken exhaust studs, and on and on. While I’m far from an expert when it comes to internal combustion engine vehicle repair (given that I haven’t worked on much from this millennium), I’m ready to branch out. It’s time for an electric conversion.

This won’t be cheap, and it won’t be easy. But it will be happening, and soon (ish). The first issue I need to tackle is: I have to decide which vehicle to use as a platform for the build. Here are my options:

The Rusty FC From Washington

Perhaps my greatest achievement in life occurred almost exactly a year ago when I resurrected the rusty, long-dead 1958 Willys FC-170 you see in the video above. I probably sacrificed seven years of life expectancy from all the mouse feces I inhaled (and we can’t forget the trenchfoot I got while sleeping in my Land Cruiser), but it was somehow worth it. Just look at that $1,500 monster off-road for seven hours straight after having sat on a farm for probably 20 years (at least). 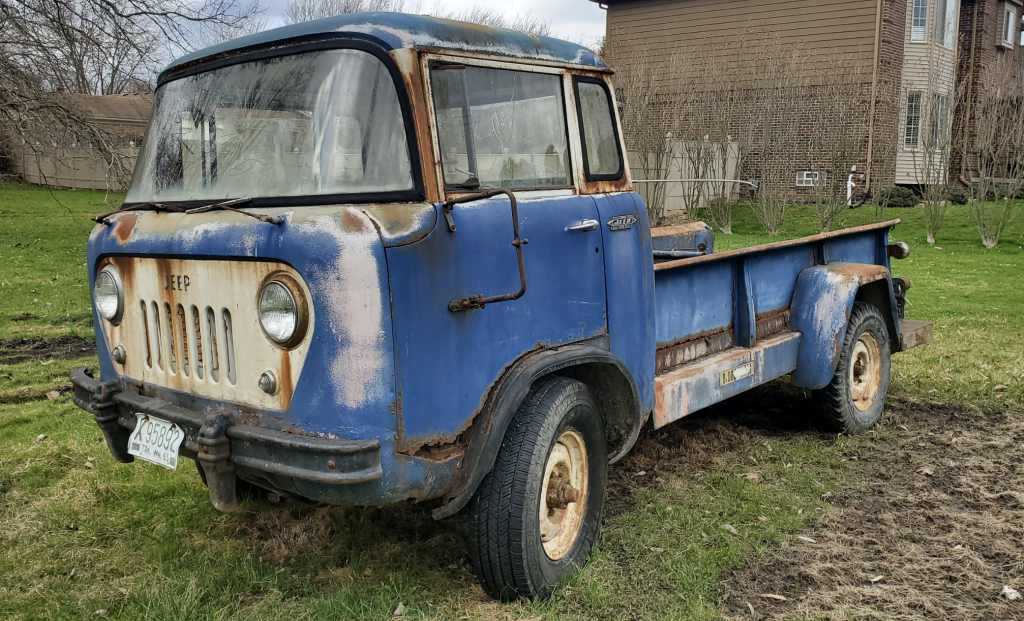 Anyway, I fell in love with the blue FC during that trip, and it was my intention to use it as the basis for an EV conversion. There’s only one issue: Someone offered me a nicer (but sketchier) FC after seeing me wrench on this old rustbucket; I’ll show you that later. 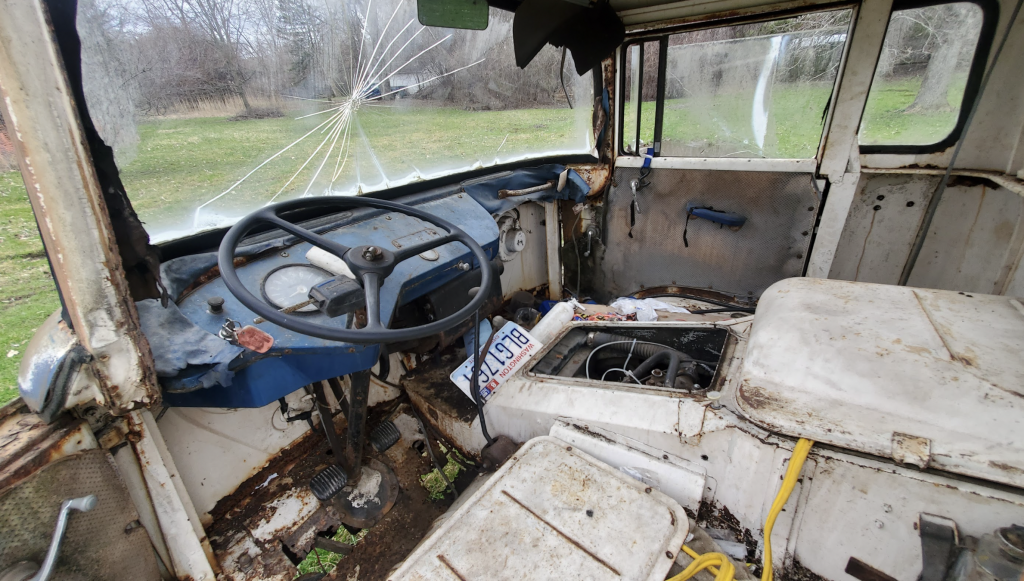 For now, I’ll present the case for using this FC as the platform for my EV build: 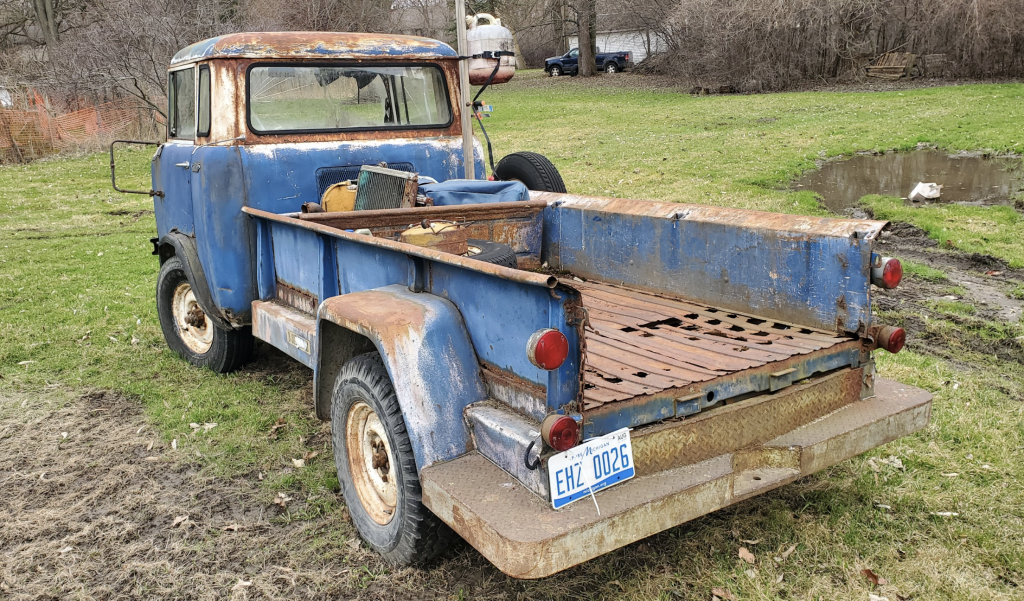 Now for the cons: 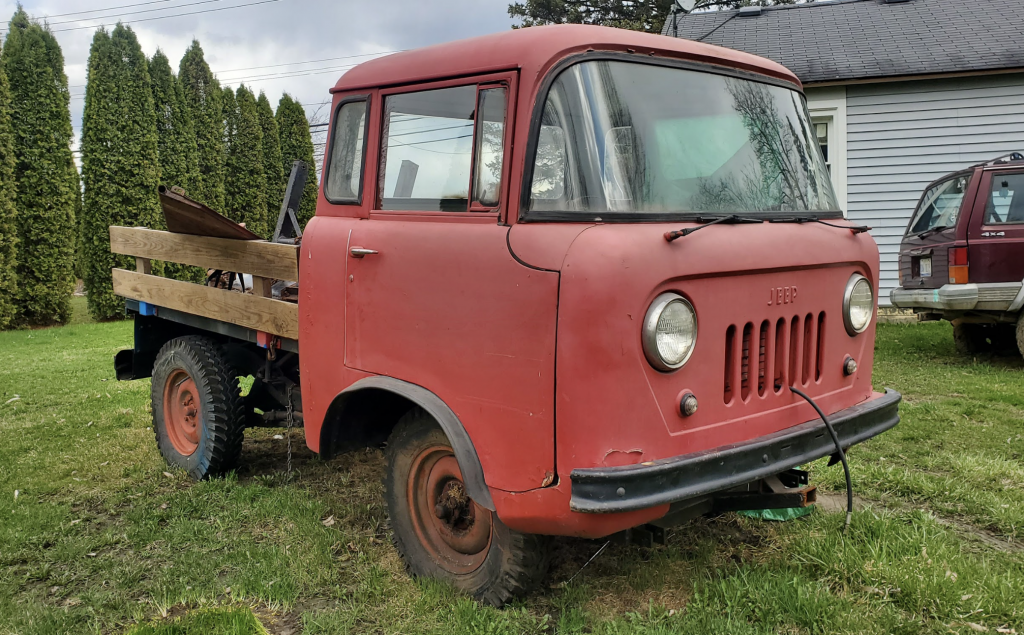 This little red FC looks to be in decent shape. I bought it from a fairly sketchy seller in a more-than-fairly sketchy warehouse in suburban Michigan. The seller had seen my friends and me wrenching on ol’ blue, and figured maybe I wanted another. He figured right.

I ignored about a thousand red flags and bought the short 1957 FC for $2,000. It came with no title, and it has no VIN. In other words, I cannot register this vehicle — at least not until I figure this paperwork thing out. I do have a line on a cheap 1957 old FC-150 being sold for parts, with a title; I could create a Ship Of Theseus situation and use the other Jeep’s paperwork…

I met my red Jeep’s previous owner, a rambunctious 86 year-old man who lives on a farm in the middle of suburbia. It really is a bizzare place; here’s this older couple living in a small cottage on a few acres, and just on the other side of their fence sit dozens of condos and strip malls. This gentleman, a cranky but decent guy who still wrenches on his John Deere tractor, made it clear that his land would never fall to the developers. “I got all this land on a trust!” he exclaimed to me, clearly passionate about the issue.

Anyway, none of that is really relevant, other than to indicate that I don’t actually think my FC was stolen. This older gentleman said he owned it for decades and gave it to the man who sold it to me. “You actually paid money for that piece of shit?” he asked me, angry with the guy he’d sold it to. “I can’t believe he charged you for that scrap.”

I actually don’t think the Jeep is that bad. It sure looks nicer than the blue FC-170, even if much of its body is just patch panels lathered in Bondo: 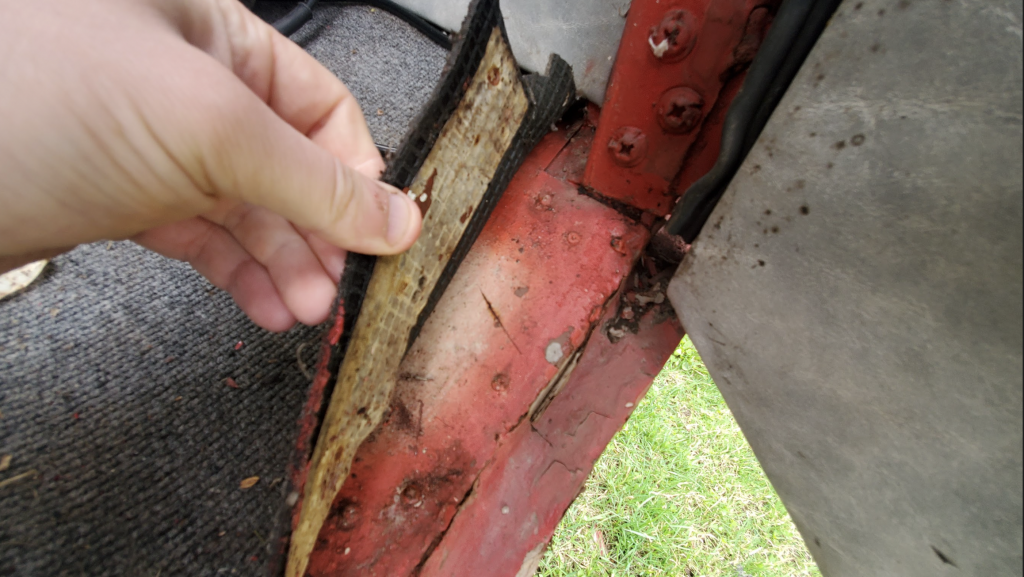 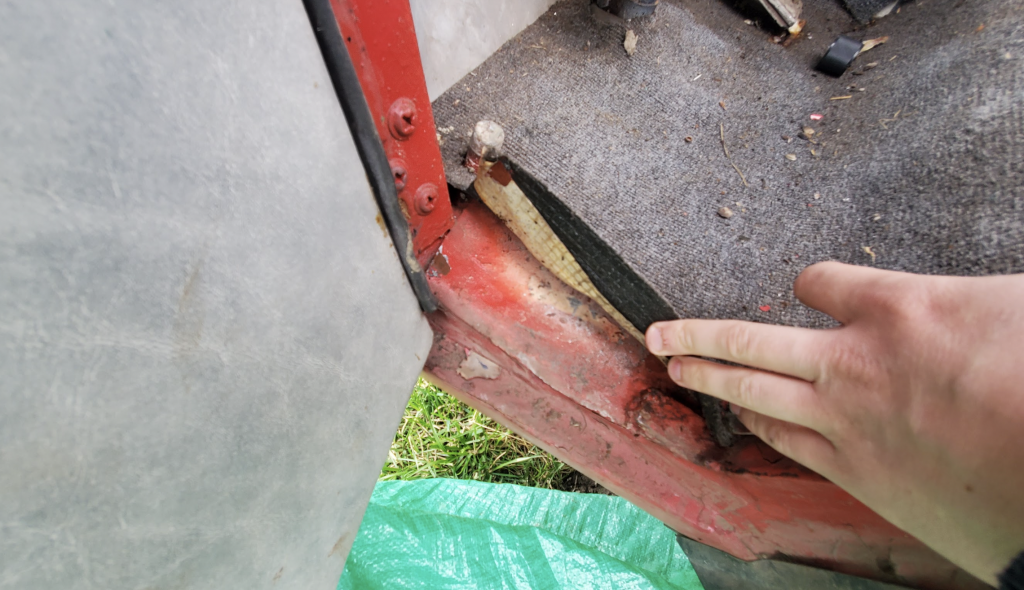 Anyway, let’s talk about the pros and cons of using this thing as the basis for my electric vehicle build. First, the pros:

Now for the cons:

It’s a tough choice. The blue Jeep has a great story behind it, and it has paperwork. It’s crappy, but it’s at least honest about it. Plus, if I sell the red Jeep, I’ll make $5,000. That’s not really much if you compare it to the $15,000 it might take to convert one of these Jeeps to electric. And certainly, if I plan to actually make the blue Jeep look nice, that’s going to cost another $5,000+ if I had to guess. So in the end, the blue Jeep would be pricier if I decided I wanted to fix it up. I could just keep it as-is, and have an EV-converted ol’ rustbucket. I kind of like the way it looks now, to be honest. Why does it have to be completely rust-free and nice to be worthy of an electric vehicle conversion? Maybe that’s a silly question. 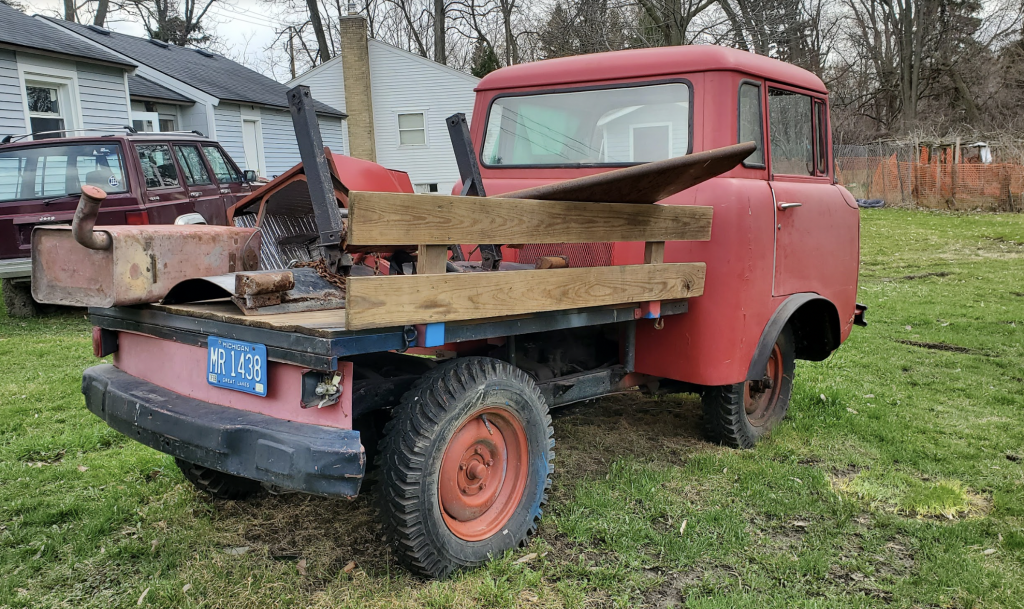 I guess part of the issue could be that using a rough-looking Jeep as a basis for an electric vehicle conversion guarantees that the entire investment will be a moneypit. No matter how nice that blue Jeep drives, if it looks like it does, it may not be worth anything. But what if I don’t sell it? I could also just suck it up and do the bodywork on it; a nice EV-converted FC-170 would be worth something, I bet. Or I could just convert the red one and drive it as-is after I figure out the paperwork issue, and after I figure out how to fit a Tesla drive unit between those frame rails. Oh, and after I make sure it’s not completely made of Bondo.

I really don’t know what the move is, here.