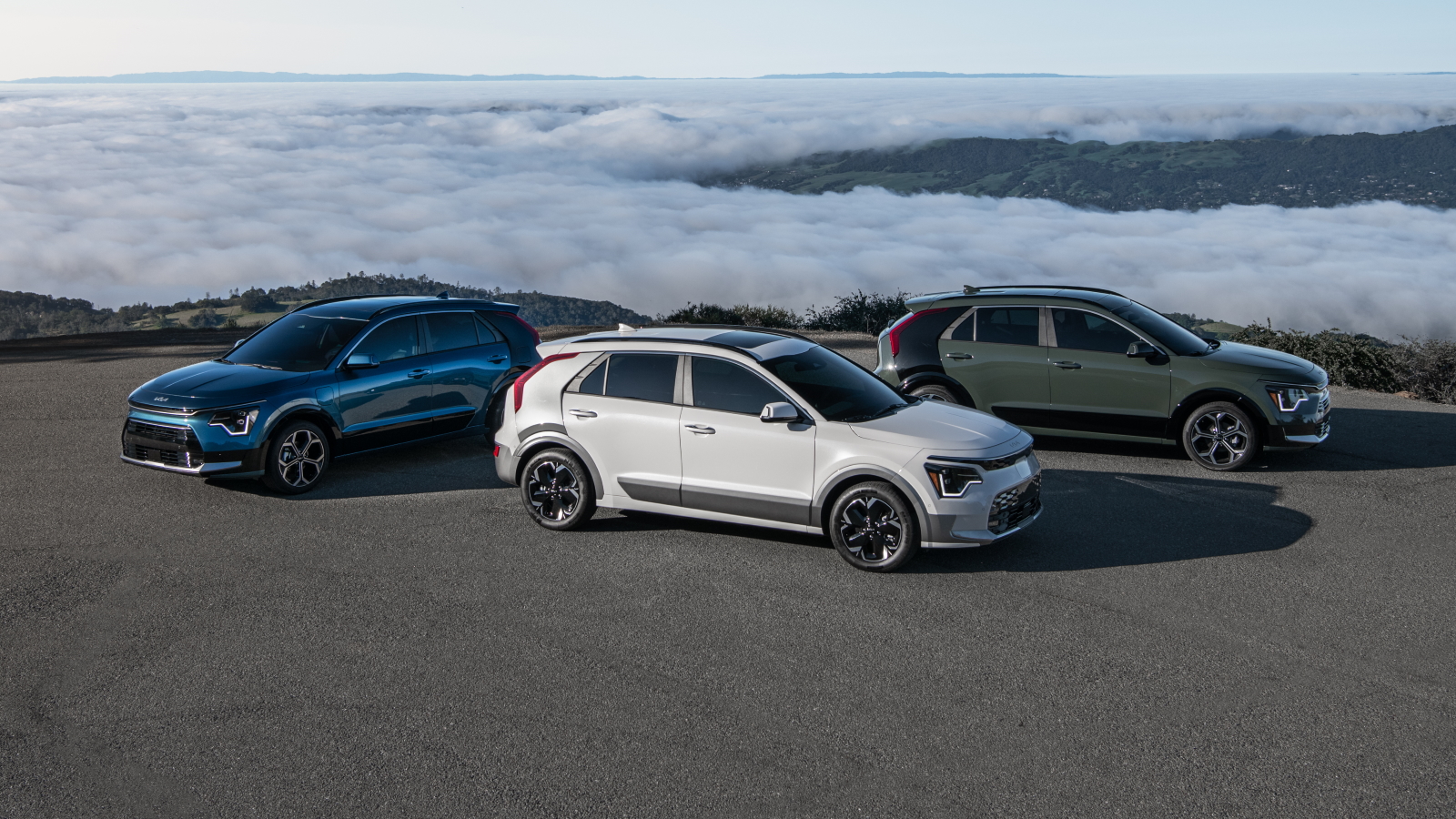 Why are cities like Austin and Portland holding on to a history of weirdness like a middle-aged high school quarterback is holding on to his varsity jacket? Weird isn’t gentrification. Weird isn’t an entire city hauling out its best James Murphy “I was there” in defense of its claimed weirdness. Weird isn’t walking into a bar that’s branded as a speakeasy for no apparent reason, only to plop down next to a bearded tech bro who claims that overpriced IPAs are good drinks. (IPAs were never designed to be good, they were designed to survive a trip to India). Weird is Columbus, Ohio – two scoops of context-free brown chili poured over a concrete jungle of unrepentant shittiness. Weird is serial graffiti that simply says “Josh Brolin.” Weird is Jason Torchinsky, and we love him for it. Weird is the 2023 Kia Niro, a seemingly cromulent electrified crossover sealed in a delightful wrapper of unhinged design.

Look, we’ve seen the 2023 Kia Niro before. The global version was unveiled last year and when that happened, we all had a similar thought: Surely they wouldn’t be bringing the all-electric version to North America now that the EV6 is rolling out. Well, the joke’s on us because not only is the Niro EV coming to America, it’ll be sold in all 50 states this time around. While a front-wheel-drive-only electric crossover might not see too many Alaskan customers, I salute the brave few who are eager to go electric.

Set Your GPS To Funky Town

While the old Niro is best described as boring but good, nobody will ever claim that the new one is boring. This thing challenges the Toyota C-HR for strangeness by offering more than a whiff of Citroën C4 Cactus wackiness. Let’s start with the front end, or should I say front ends. Hey, the old Niro EV had a bespoke front fascia treatment, why not keep it going? Hybrid and plug-in hybrid models get a slim grille that stretches all the way across the fascia with the headlights sitting below it. Yes, the headlights sit mid-way down the front end. Weird, but actually fantastic for anyone in a low car as the beam pattern should be low enough not to blind sports car drivers. The Niro EV gets a different grille up top, except it isn’t actually a grille. It’s just a hexagonal pattern behind a glossy facade, as fake as a customer service rep’s phone voice. Still, the Niro EV’s front fascia looks quite nice.

The Niro wouldn’t be a crossover without plastic cladding, although Kia’s doing it a bit differently here. Contrasting trim starts on the front bumper, flows around the wheel arches, goes down the front door and just dies mid-way down the rear door, only to be picked up again in the rear arches, rear lower valence and C-pillars. This unusual trim treatment gives a dairy cow aesthetic to the Niro, particularly when specced in white with the contrasting C-pillars. Yes, contrasting pillars like an Audi R8.

In fact, Kia calls each pillar an Aero Blade — a bit close to Audi’s side blade terminology. I’ve been staring at these pillars for a few hours and they still seem a bit shocking. Not in a repulsive way, but rather in an intriguing way. Sure, the contrasting finish is optional, but why wouldn’t you want to be weird?

Mind you, the Aero Blade’s available contrasting finish is nothing compared to how Kia claims it “aids airflow underneath.” Huh? Yes, what looks like a simple quarter panel is actually a floating element with functional air channels. Air enters through a hole in the Aero Blade’s forward edge and exits behind the tail light, allegedly improving the Niro’s aerodynamics. Pretty crazy stuff for a mass-market crossover.

Also on the weird list? Check out those taillights, mounted entirely on the sides of the Niro. Yes, mot the back — the sides — and sticking out like tail fins for rearward illumination. Neat. If I’m being honest, the actual hatch treatment reminds me a lot of the European-market Mk2 Ford Focus. That’s not a bad thing, the Mk2 Focus was a handsome car, but it is an odd reference for a future-focused green vehicle.

Department Of The Interior

Compared to the bizarre exterior, the inside of the new Niro is noticeably more conventional. The old car’s floor-mounted shelf between the seats is gone, much to the chagrin of laptop bag-toters and purse owners. Hell, a chicken shawarma platter in a cardboard takeout container fits millimeter-perfect in that shelf, so I’ll miss it too. I’m referring to this, by the way:

The dashboard design is largely similar to that found on the EV6, while the door cards are a touch bland and generally unadorned. Kia, you had a shot at some funky textile patterns — you should’ve taken it.

Mind you, corporate design doesn’t mean that Kia didn’t make some odd choices. On a positive note, the two-spoke steering wheel could pass for a Genesis part and the headliner is composed of recycled wallpaper. Hey, wallpaper is fibrous so why not? On a negative note, the touch-sensitive panel for climate and media functions is sure to draw complaints from owners. Dear manufacturers: I know that touch-sensitive tech is cheap, but could you please knock it off? Muscle memory doesn’t work so well on things without detents and things that move, so combining both those attributes is a bit like serving someone a mayonnaise and anchovy smoothie. Readers, I’ll give you a minute to do the technicolor yawn if you have to.

As with the old car, the 2023 Niro features three different methods of propulsion. The most budget-friendly option will likely be the hybrid featuring a 1.6-liter four-cylinder engine and a 32 kW electric motor pumping out a combined 139 horsepower and 195 lb.-ft. of torque. Those aren’t bad figures, and neither is the targeted fuel economy of 53 mpg combined. Interestingly enough, the Niro hybrid doesn’t feature a continuously variable transmission, instead employing a six-speed dual-clutch transmission that’s sure to be fairly alright.

Taking things up a notch, the Niro PHEV pairs that same 1.6-liter four-cylinder engine and six-speed DCT with a 62 kW electric motor and an 11.1 kWh lithium-ion battery pack. Torque stays the same at 195 lb.-ft. but horsepower jumps to 180. Hey, that’s pretty solid for the entry-level PHEV segment, as is an all-electric range of around 33 miles on 16-inch wheels. Interestingly enough, the Niro hybrid and Niro PHEV come with a special Green Zone drive mode that automatically shifts things to all-electric power in residential areas and near schools and hospitals. Very few cars offer a “don’t be a dick to people” mode, so this is a rather interesting development.

As for the Niro EV, it features a 64.8 kWh battery and a 150 kW electric motor driving the front wheels. Kia’s targeting a range of 253 miles which, if we employ ancient witchcraft known as mathematics, is actually more range than a base EV6. While that is a bit weird, we don’t really know where the new Niro EV will clock in at price-wise so it may not actually undercut the base EV6. What we do know is that the Niro EV will feature vehicle-to-load capability to run 120-volt appliances off of the electric battery pack. Neat stuff.

While it doesn’t seem like Kia’s reinvented the wheel when it comes to powertrains, they may have reinvented the brakes. See, every 2023 Niro comes with an incredibly complicated yet incredibly promising regenerative braking system. Using the car’s front-mounted radar and road gradient information, the new Niro can automatically vary the strength of its regenerative braking. While Kia claims that this enhances energy regeneration, I’m genuinely curious as to how natural it feels in operation. If it works as well as the grade logic in a conventional automatic gearbox, Kia may have solved the feel of coasting on regen.

Honestly, I’m pretty stoked to see the 2023 Kia Niro hit the streets this summer. It feels like it’s been a long time since we’ve seen a properly weird mass-market car debut, especially one with such a focused purpose. Pricing hasn’t been announced yet, but I’d be surprised if the new Niro is massively more expensive than the current car. Long live weirdness.

Thomas is a Nu Rave-blaring, heel-toe downshifting, maple syrup-swilling, chassis-geeking, junkyard parts-hauling, floppy-haired scenester who's been writing about cars since college. His current ride is a 2006 BMW 325i with the six-speed manual gearbox. Instagram: @thomas.hundal Twitter: @thomashundal
Read All My Posts »
PrevPreviousWhich Of These Two Deeply-Flawed Jeeps Should I Convert To Electric?
NextCold Start: Saab CinemaNext