Lane Motor Museum’s restoration shop is one part of the museum that isn’t really open to the public. On warm days, the shop will open the roll up door, put up a “do not enter” strap, and guests can gawk at the cars and the mechanics like they’re at a gorilla habitat. Occasionally they’ll ask a few questions if staff are within earshot. We politely ask visitors to not feed the technicians…they’ll just want more of your beef jerky and chocolate bars.

Anyway, I wanted to give a periodic “what’s in the shop” update. It will be sporadic, because some of these items are loooong term projects. If something new and exciting comes into the shop, I’ll grab a few pics and write an update. 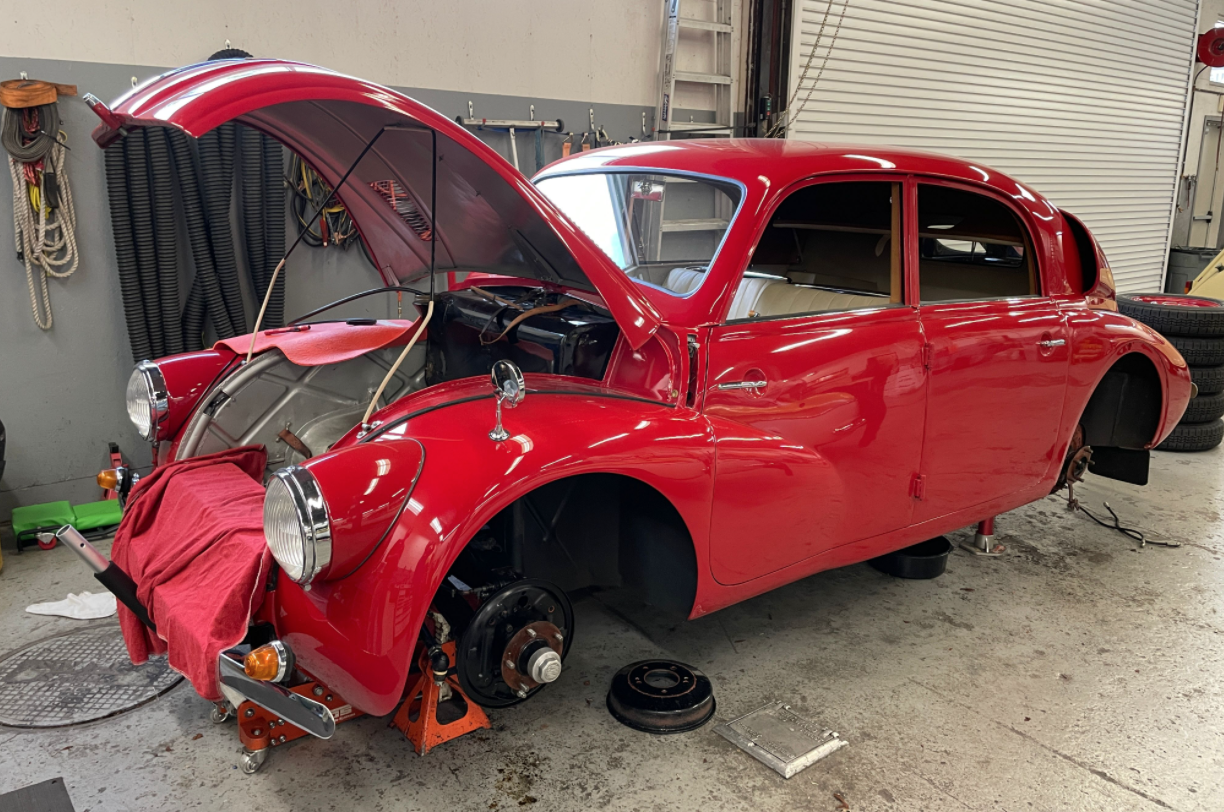 Jeremy is working on readying this rear-engine, air-cooled beauty for museum director Jeff Lane’s 1,000 mile drive in the Hagerty California Mille vintage car rally in a few weeks. That means going through the brakes, replacing the tires, fixing some minor electrical issues, replacing the non-working wiper motor, flushing the transmission fluid, and going through linkages and the steering box — all so that the boss doesn’t suffer a DNF.

Also, do you want to see something a tiny percentage of humans throughout history have seen? 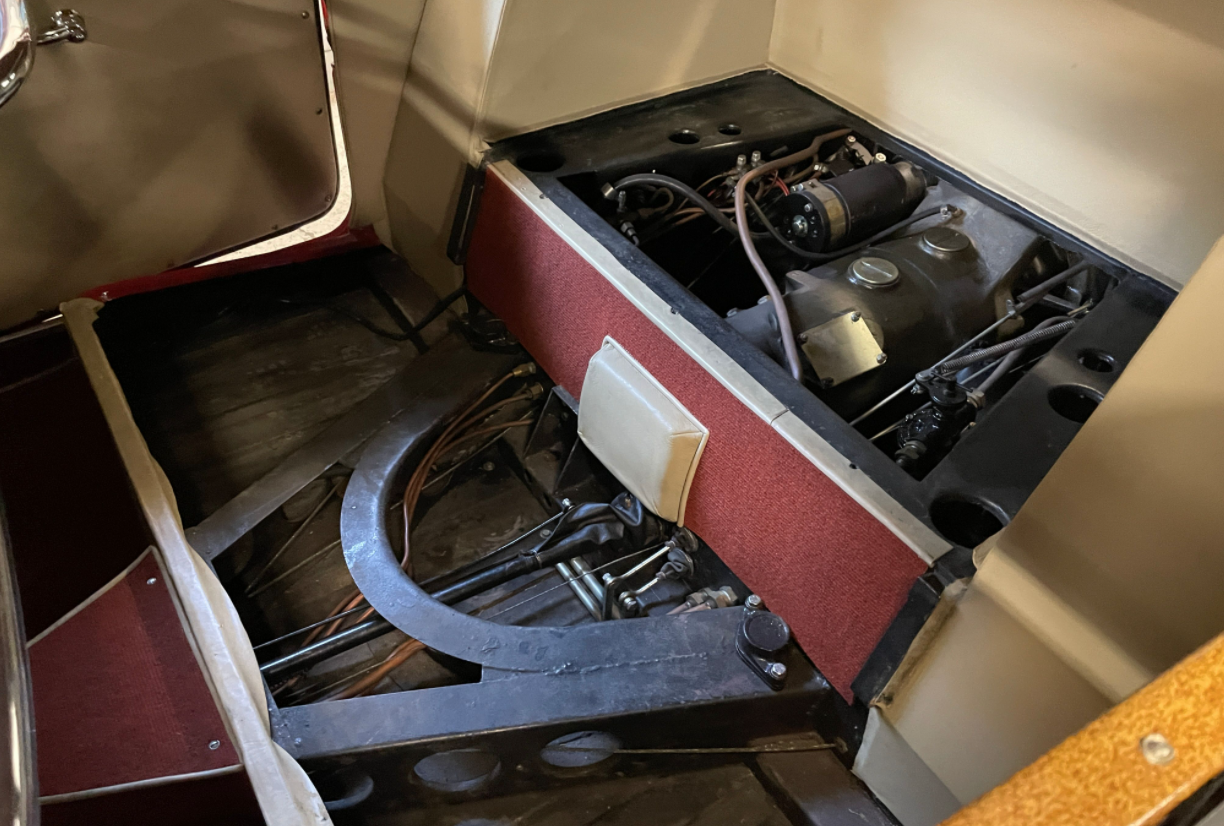 That’s what’s under the rear seat of a Tatra T97. A rare sight indeed.

[Editor’s note: I actually added this pic and those couple sentences because I adore these cars, and I’m certain hardly anyone reading this has seen what’s under the rear luggage floor of a T97, and under the back seat. What we’re looking at is the rear frame fork under the seat, and the transmission and starter under the luggage floor to the rear.

Anyone who has worked on a VW Beetle in this same are is likely to note an eerie similarity, but with better access to the starter. – JT] 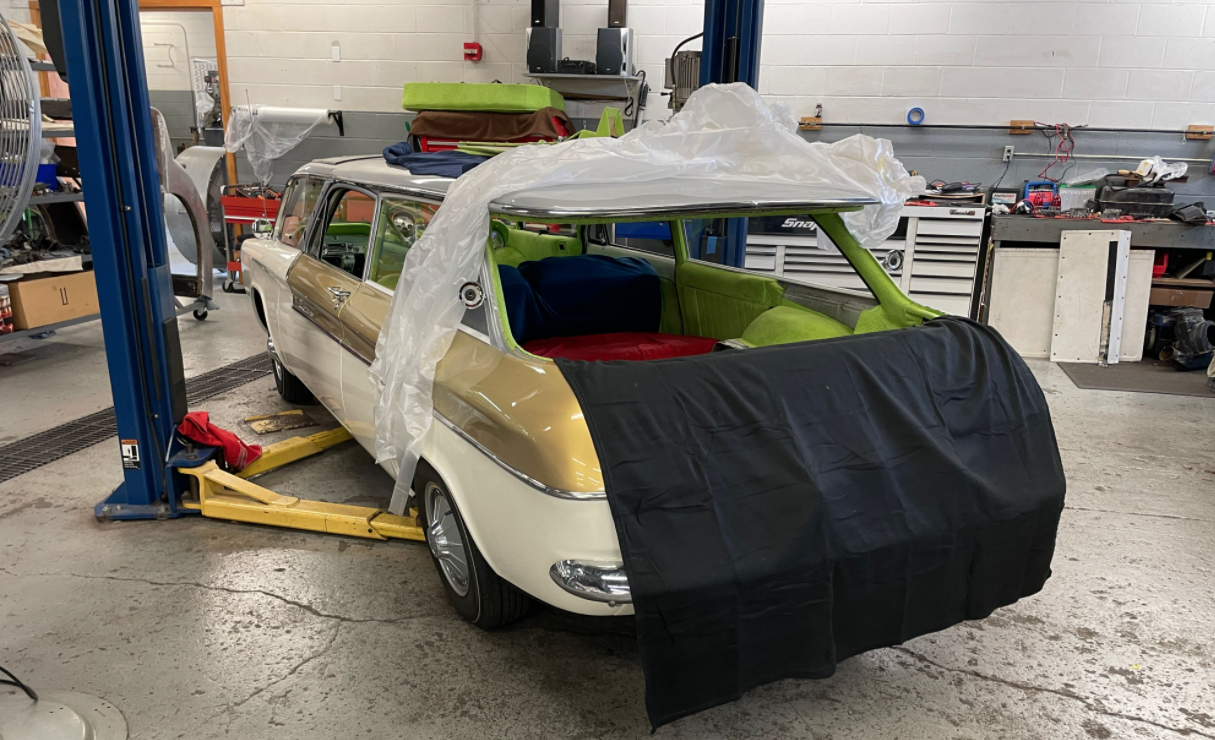 We acquired this heavily customized Chevy Corvair-based car from legendary car restorer/TV host Wayne Carini about a year ago. It was featured on his TV show, Chasing Classic Cars, and the last segment of the episode was about us (which was great….Wayne’s really nice). I’ll go into what this is in a later article, but basically, in the 1990s, the original builder found this concept drawing from a 1960s Kaiser Aluminum ad by Rhys Miller (purportedly of Ford Thunderbird fame): 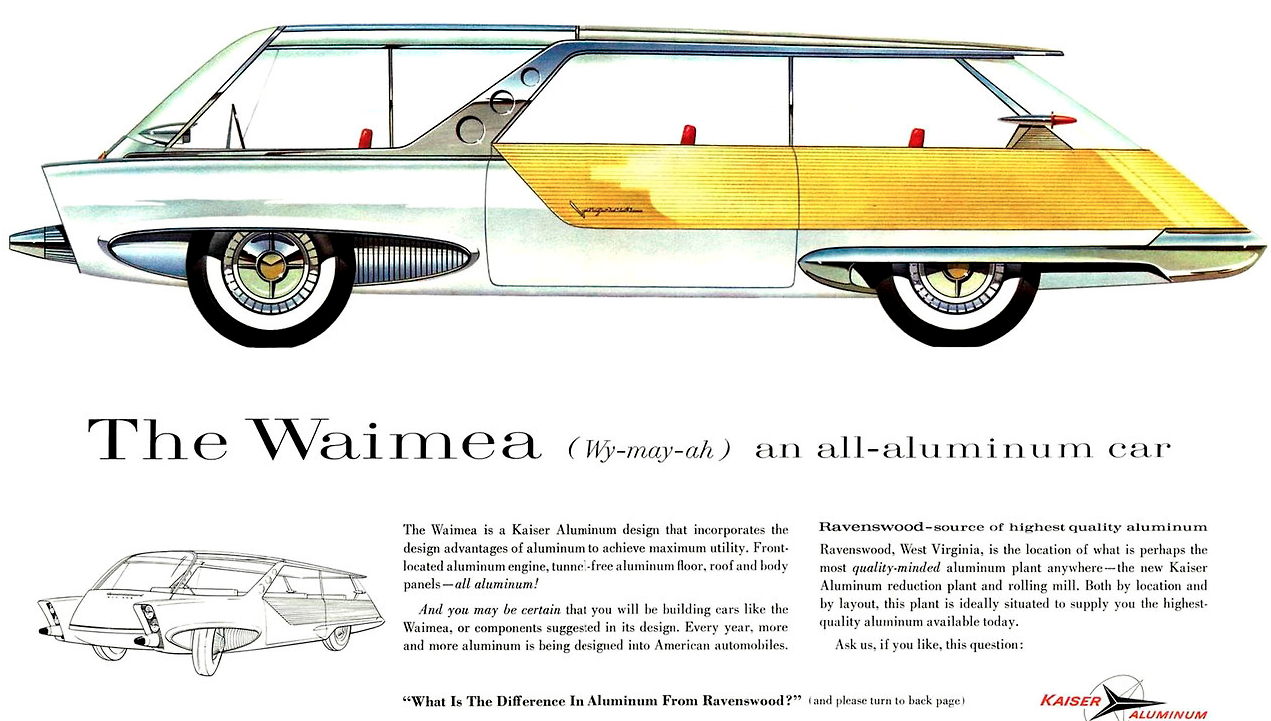 Somehow, they looked at this incredible thing and said, ”yeah, I’m gonna build THAT!” 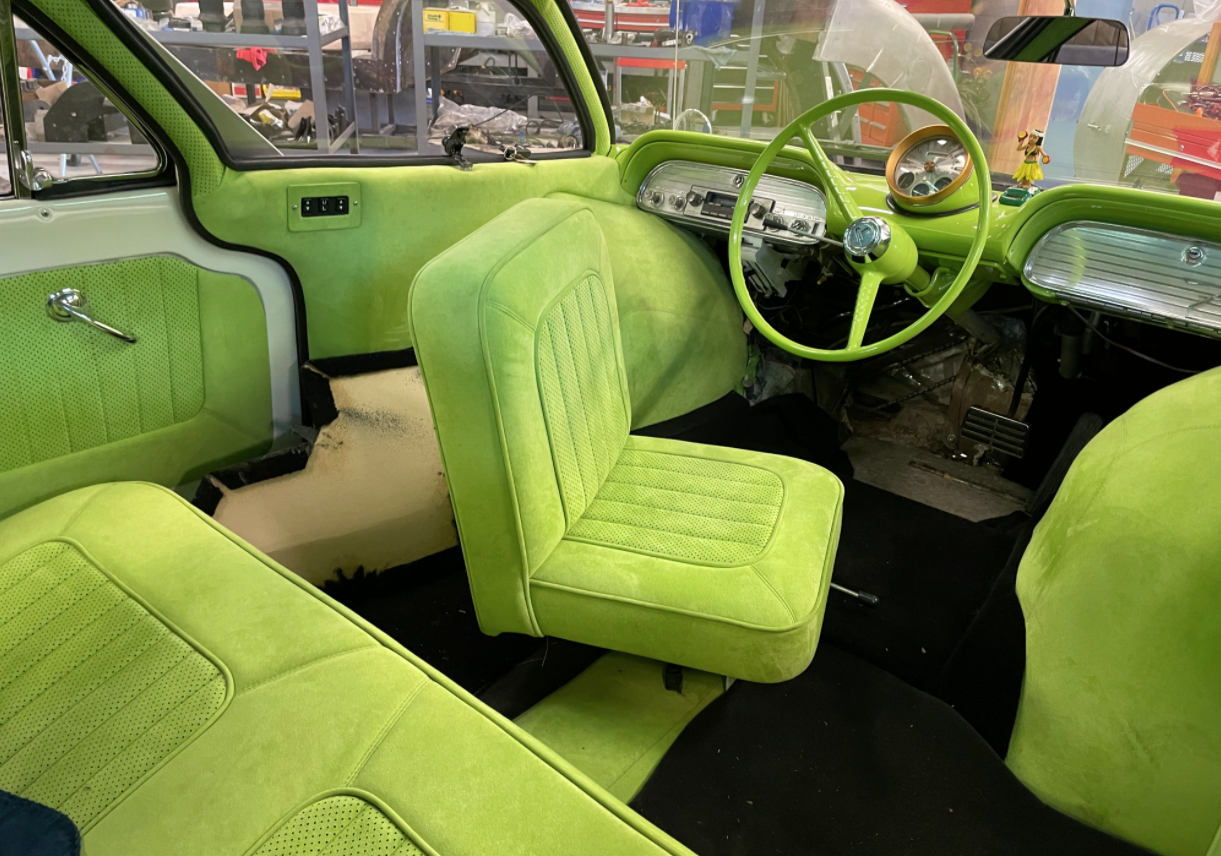 Oooh boy, what doesn’t this thing need? It currently isn’t running. One of the carburetors is overflowing, so that will have to be rebuilt. The transmission is leaking fluid, the differential is leaking, almost all of the bushings are worn out, it will need a new gas tank, the starter doesn’t engage, and the electric windows, blower motor, and radio do not work. 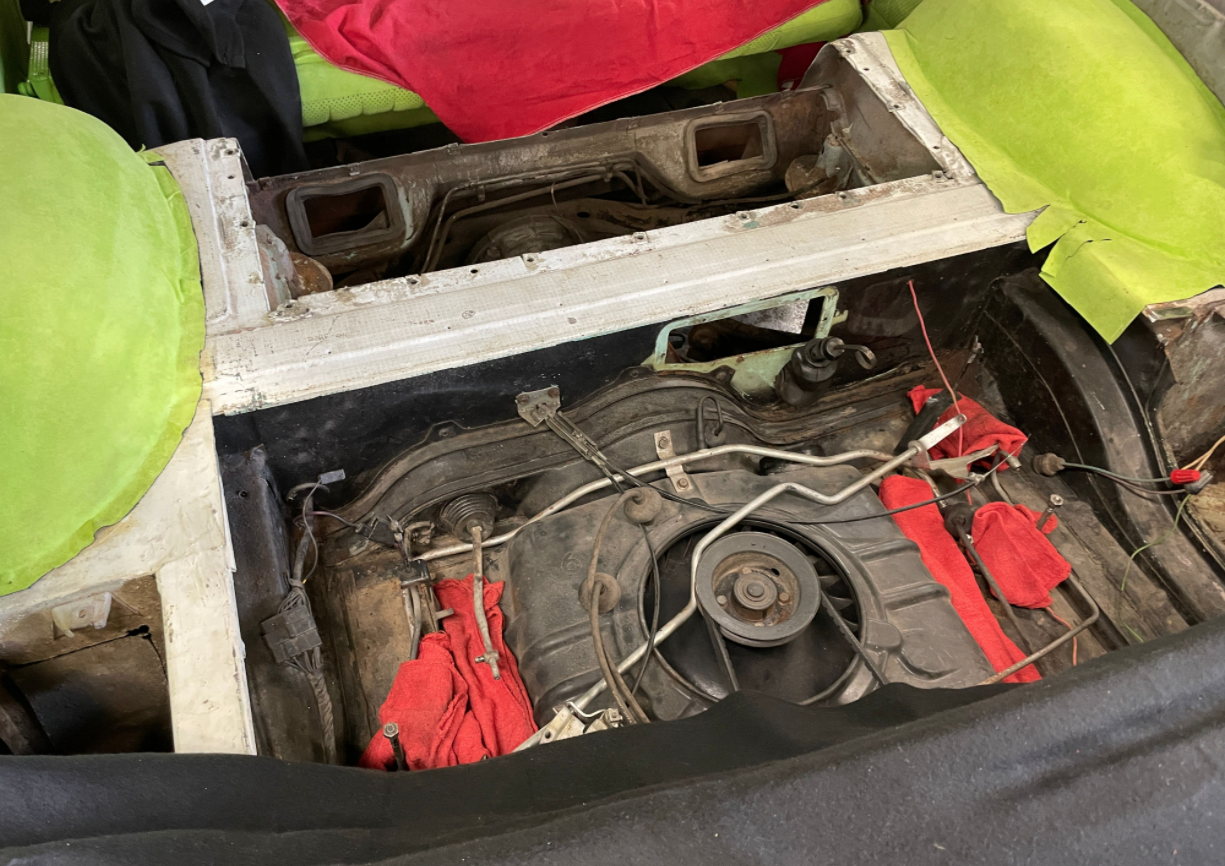 I drove it out of the museum when we first got it, as we wanted to to take pictures, and, well, it steered like the front wheels were two bowling balls attached by a rope. The steering feels the way it does because in order to achieve that cool-looking center-mount position, the steering is a hybrid between a chain-drive and a standard system that; by design, it has a whole heap of slop.  Jeremy says the horn, headlights, and taillights work, so there’s a bright side. Well, two. 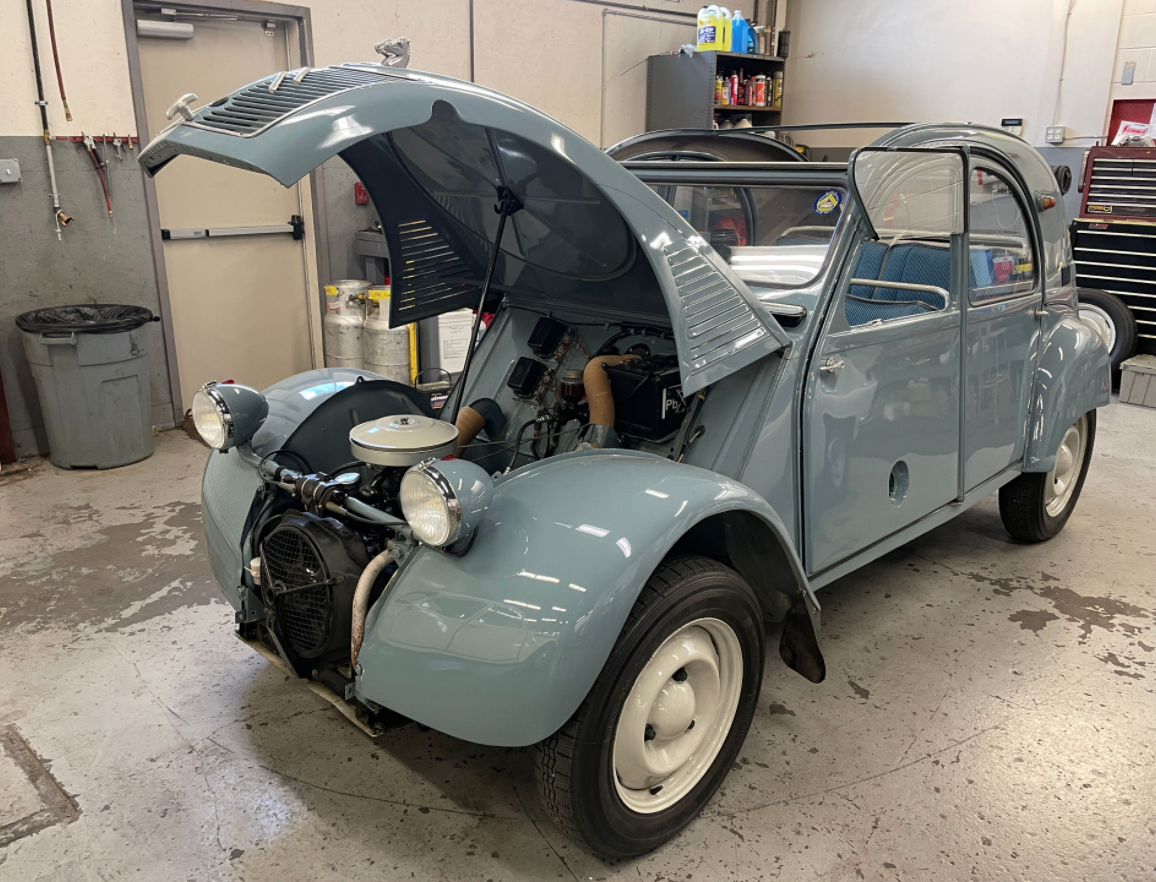 The 2CV just needs a front bumper. Our fabricator Nick is currently making one. It had a bit of work done last year in preparation for an off-road event, so it’s fairly mechanically sorted. 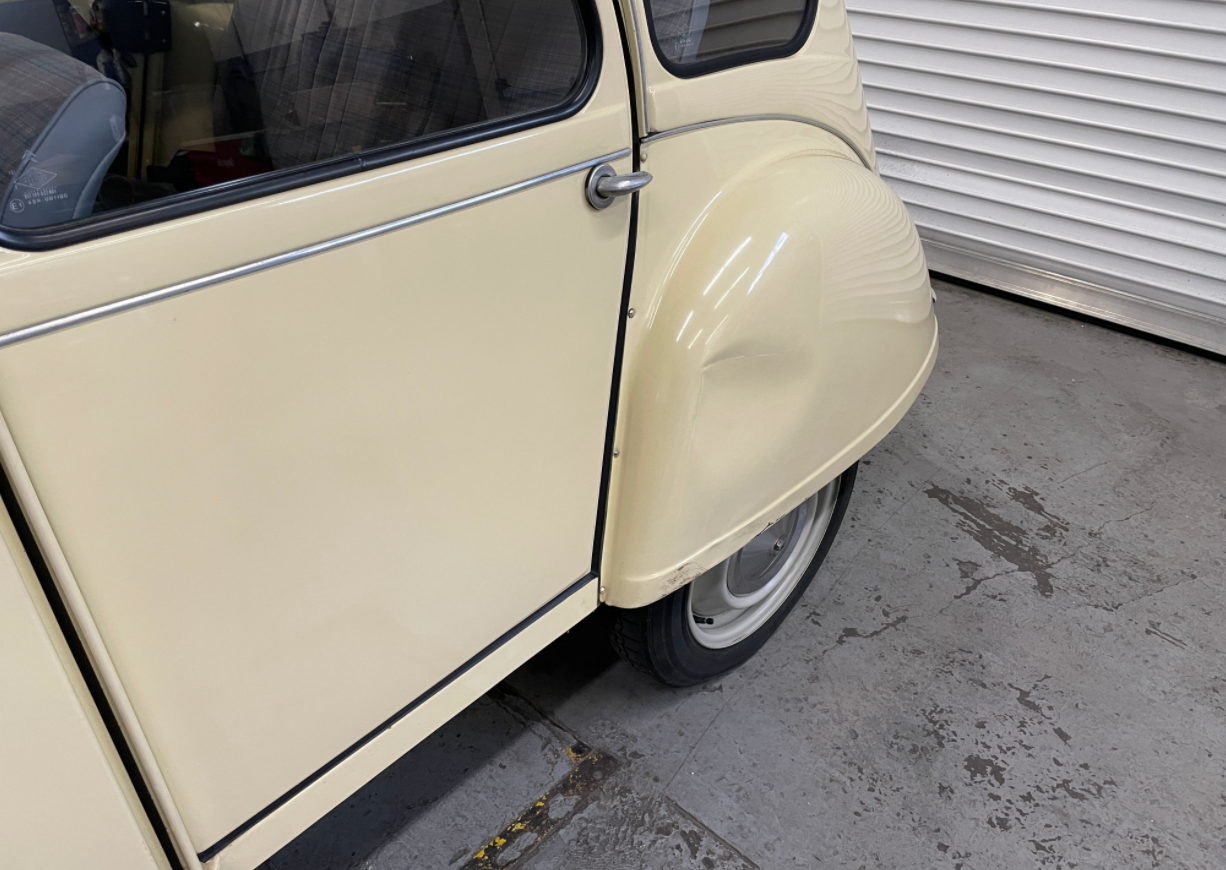 This one has a dent in its left rear fender put there by yours truly. The guys in the shop are trying to color match it. I swear I’m normally a good driver, but things happen. The embarrassing part is that I was backing up a Fisker Karma in the museum basement — a car with backup sensors AND a grainy backup camera, with someone spotting me, and I still dinged it. It was sitting in the aisleway and difficult to get around, in my lousy defense. The Karma was totally unscathed. Oh well….c’est la vie. 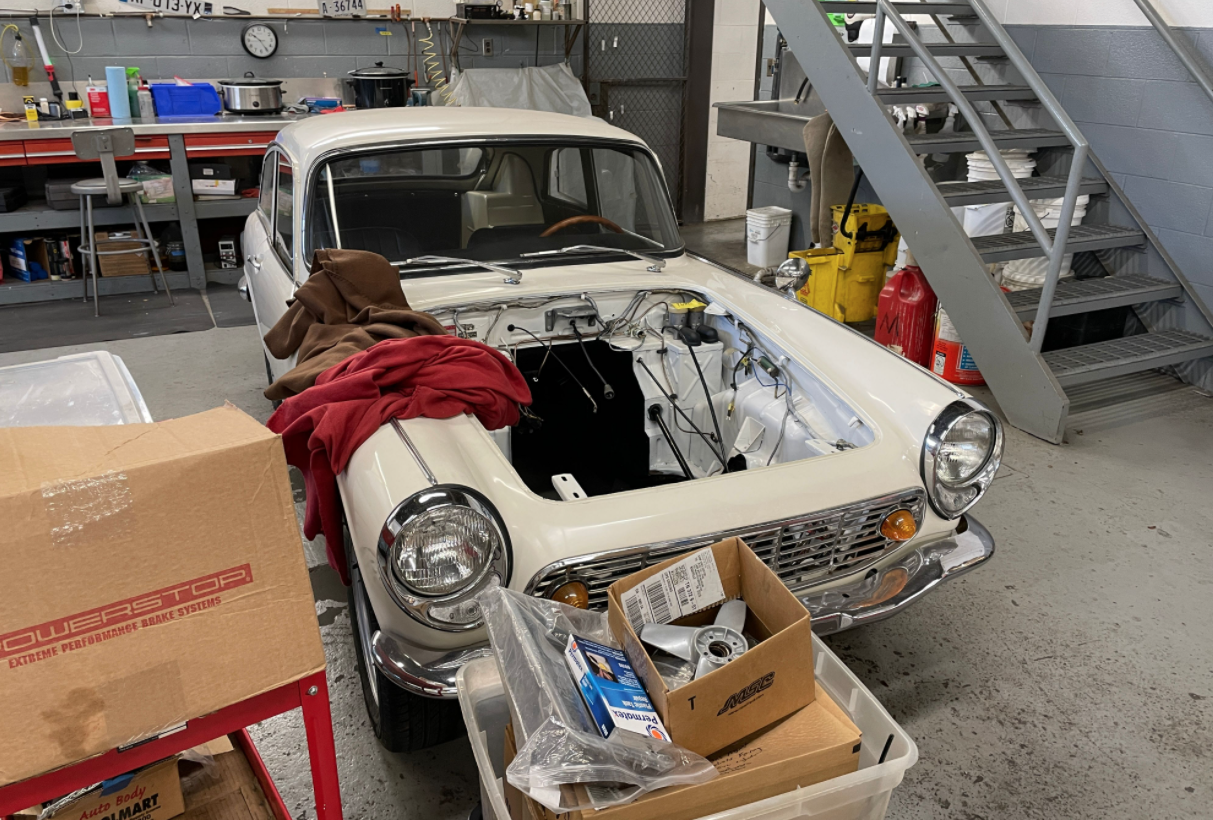 This rare little guy has most of its interior completed, but its engine is currently getting a rebuild. [Ed Note: The Honda S600 was the development of the S360, a little chain-driven sports car that was Honda’s first actual car, and should have warned the rest of the world’s carmakers that something big was happening. They’re amazing little roadsters. – JT] 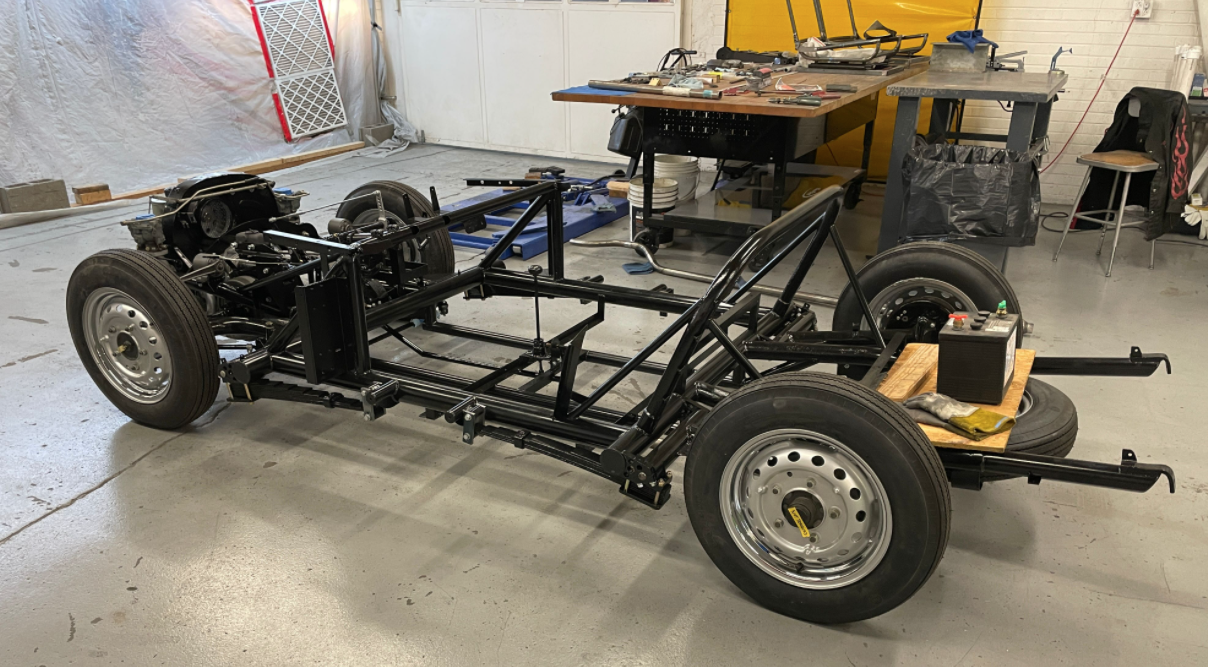 Kansas City native Ben Gregory was an early proponent of front-wheel drive. From 1920-1922, he tried to put a car into production, and it is believed that about ten were made. Funding ran out, and Gregory gave up on the car business. After WWII, he again became interested in producing a front-wheel drive car.

And yes, that engine up front is an air-cooled Porsche 356 engine, which, as you know, is normally found at the rear of cars. 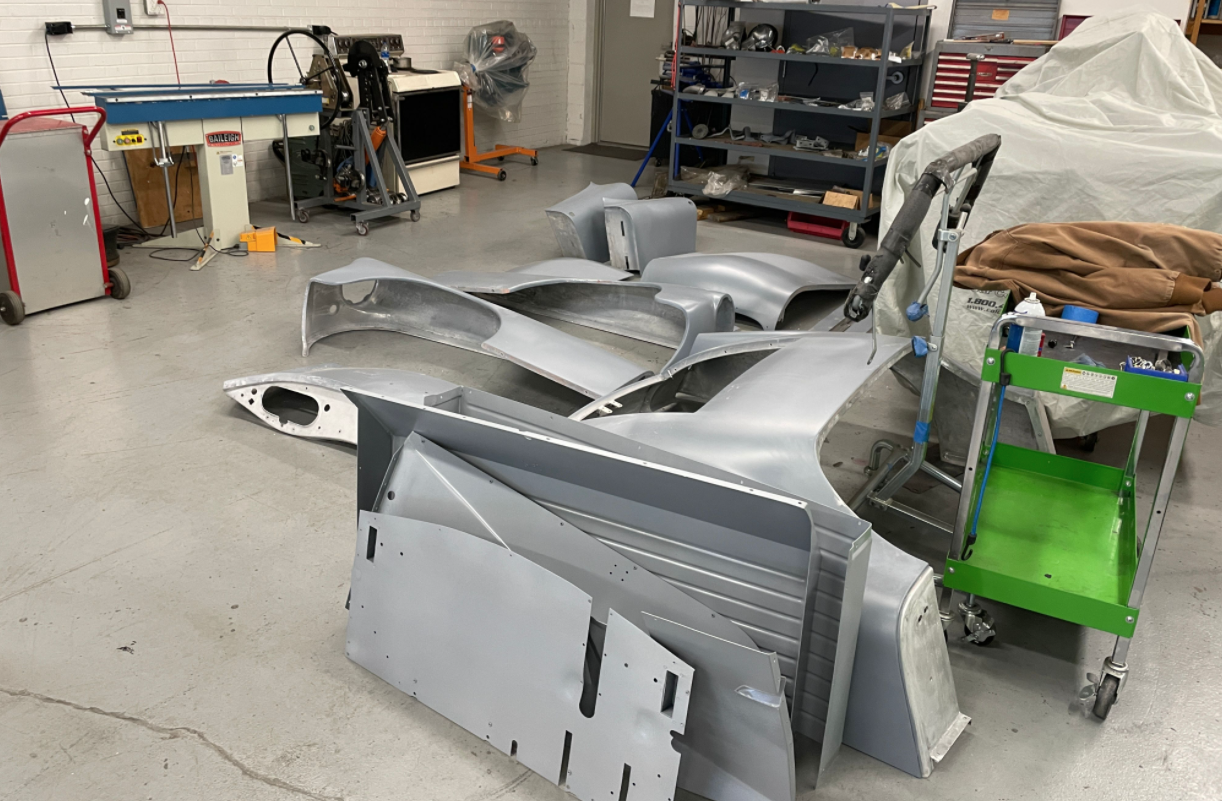 He made a couple of sedans (we have one of the two), and this is the only roadster he produced. Our in-house German technician, Michael, recently finished its chassis. He is currently painting its aluminum panels, so this one is inching closer to completion. 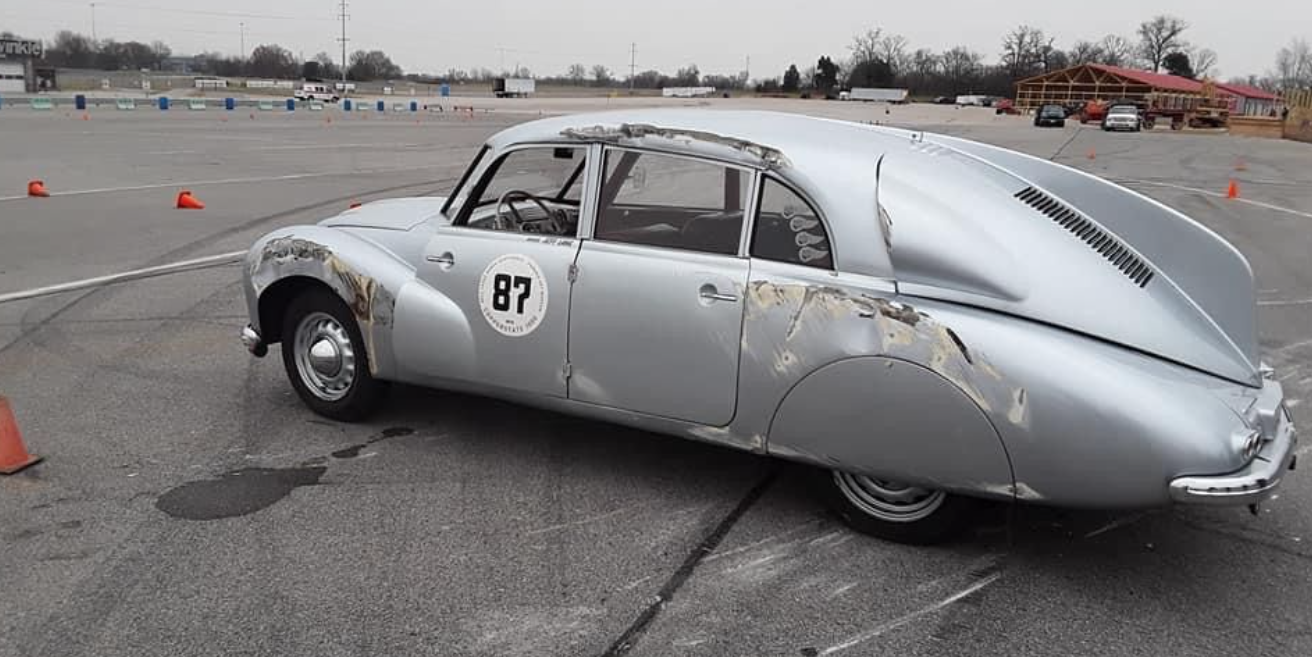 The Tatra T-87 is a legendary Czech car from the 1940s with an air-cooled V8 at the rear and a reputation for being so tricky to drive, German SS officers were forbidden to try it. But it can be considered a supercar of its era, because of how advanced the design and engineering was for its time,

That air-cooled V8 engine from ours is getting a rebuild, along with the transaxle. The car is currently on display, just sans engine. It was sent out for a new paint job last year after an automotive journalist (NOT Jason or David) rolled it onto its side at a race track. He was fine, but proved his point about rear-engine Tatras being prone to flip over. We turned it into a tee shirt…you can get one in the museum gift shop. 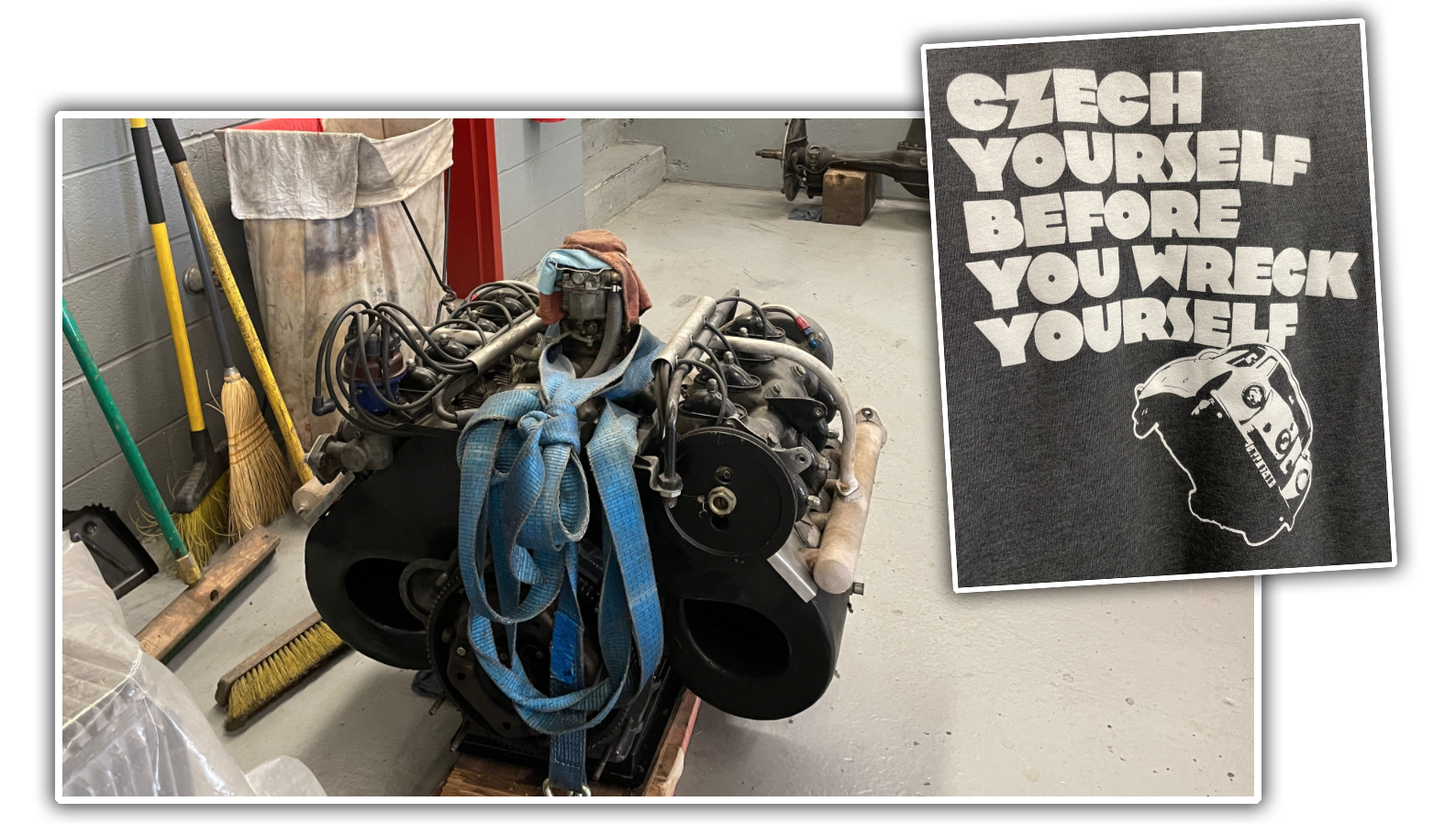 There are few more long term projects I’ll hit on next time. And this is just the “upper” shop, where deeper restoration and mechanical work takes place. Our fleet management team works in the basement storage area, handling day-to-day maintenance work, driving the cars to keep them healthy, and readying the cars for display and for visiting journalists who want to drive them (ahem). I’ll introduce those guys in a future article and show you how they change out museum exhibits.