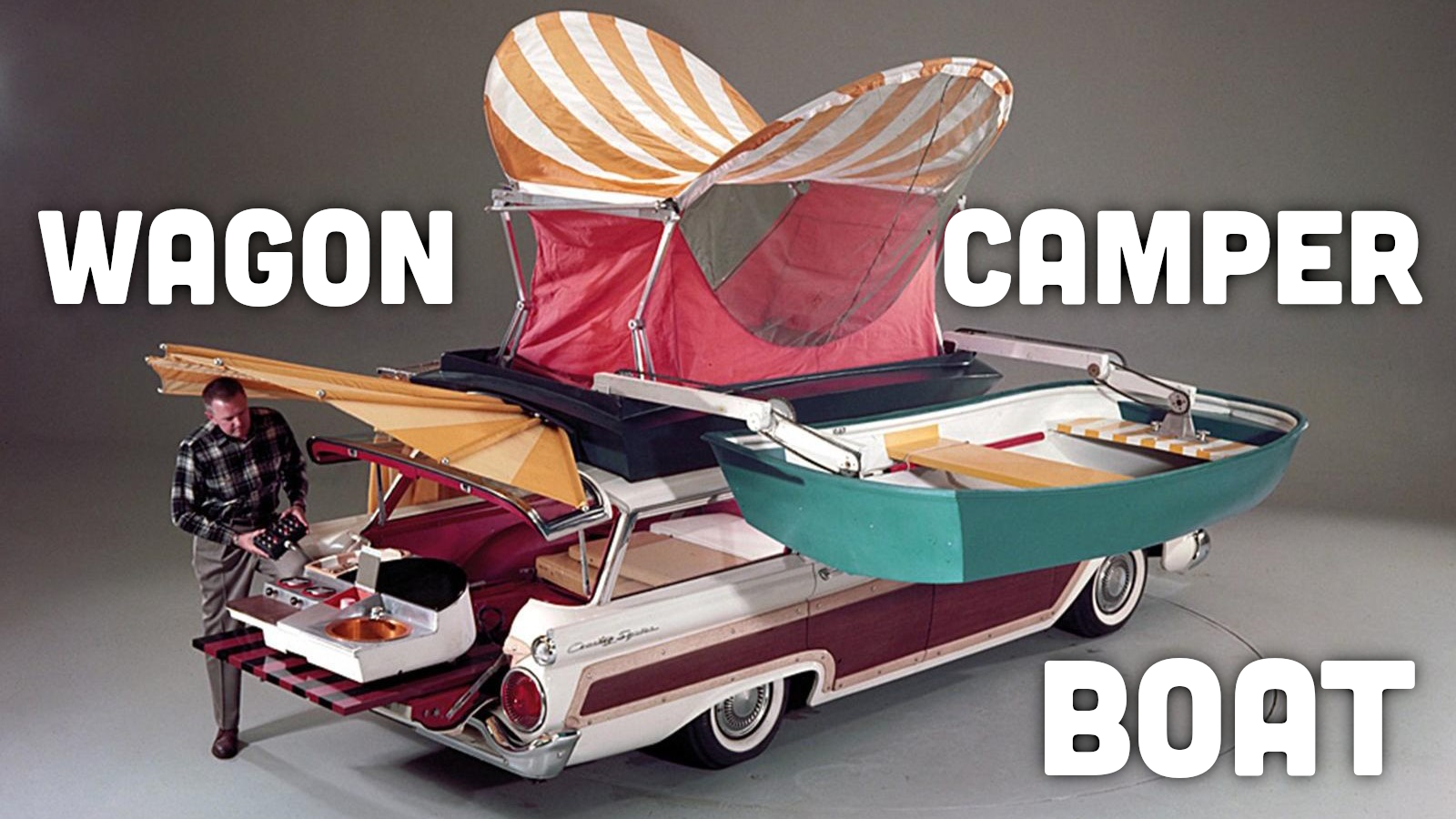 Earlier this year, the Ford Motor Company opened up the Ford Heritage Vault. The website contains more than 5,000 pieces of literature and photographs from the company’s first century of history. In it, you can explore all sorts of old car history, including forgotten concepts. One concept caught our attention, and it’s a 1959 Country Squire Station Wagon. But this isn’t just any old wagon with glorious simulated woodgrain, but one that transformed into a camper at the touch of a button.

I will warn you right now, if you are a Ford fan and want to access the vault, it’s going to take you a very long time. It took me over an hour just to download the pictures for this article. And pages load so slow that you sometimes get timed out before loading finishes. It’s frustrating, to say the least. But, FoMoCo is aware of the site’s technical glitches, so hopefully this gets fixed in the future.

I’m glad I did stick around through the loading because this concept car is pretty neat. It starts with a standard Country Squire. Sold from 1950 to 1991, this full-size family hauler was Ford’s flagship wagon. As our Jason Torchinsky wrote a decade ago, the “Station Wagon” term dates back a century, when custom wood body Ford Model Ts and Chevrolets were used to carry people and cargo to train depots. They were called “Depot Hacks,” a reference to “hackney” horse-drawn carriages. Station Wagon is just another way to say Depot Hack.

Those early wagons developed from utility vehicles and buses and featured wooden bodies. Eventually, wagon designs evolved to incorporate more steel. In the 1950s through the 1970s, the station wagon became about as much of a family car as the minivan was in the 1990s and the crossover is today.

The first couple of years of the Country Squire did have wooden wagon bodies. But from 1952-on the Country Squire was metal. Ford kept the woody wagon look going with the application of simulated woodgrain along the side. By 1959, the Country Squire had features like Lifeguard Double-Grip door latches that were supposed to prevent passenger ejection in crashes. It also had safety taillights, power windows, a power front seat, and seating for nine.

Ford had a whole lineup of wagons, but the Country Squire, with its simulated wood, signified the top of the line.

During this time, Americans sought to take adventures out on the open road. RV pioneers were cranking out novel ideas for people wanting to get out and go camping. It was around this era that Raymond C. Frank even coined the term “motorhome.” Ford took note of America’s growing desire to camp, and launched its own concept.

In an archived July 3, 1958 issue of the Washington Post, a 1959 Ford Country Squire Station Wagon is presented as a “pushbutton camper” concept. At first, the Country Squire looks like any other, with what appears to be an upturned boat on its roof. But then, with the push of a button, a motor lifts the boat up and rolls it out to the right side of the car. A person could then remove the boat from the vehicle and launch it.

With the push of another button, a tent would then rise out of the space previously covered by the boat. Inside of that tent was a double bed already covered with a blanket and featuring a reading light. It slept a total of four, with two people in the tent on top and two more in the car.

There are more features still, with a third button deploying a kitchen out of the trunk. It’s a pretty well-equipped kitchen with an electric refrigerator and two-burner stove. Also popping out of the trunk is a work table, meat cutting block, and a sink with running water. There was even a water heater.

Ford’s camper concept included a shower and curtain that deployed from the roof, too. It’s almost perfect, but it seems Ford wasn’t able to figure out how to give the wagon a toilet.

Unfortunately, while Ford was happy to show consumers just what the big Country Squire could do, it didn’t leave the concept stage. In the archived issue of the Washington Post, Ford noted that if there was enough interest in a Country Squire camper, third party companies were welcome to develop something that would be installed at a Ford dealership. So far as I can tell, nothing like this was ever put into production.

Still, it seems Ford really maximized the practicality of the Country Squire with this concept. Sure, it wasn’t luxury accommodations. But it was a setup that you could use to go fishing out on the lake in the morning, cook burgers in the afternoon, and sleep under the stars at night. Not many camping setups have that kind of flexibility, even today.

[Correction: An earlier version of this article listed engine options for the Country Squire in a different market. They have since been corrected. Thank you for your eagle eyes, readers!]

Mercedes is a lifelong fan of all things powered by an engine. When she isn't driving one of her five Smart Fortwos or her 14 other vehicles she could be found in the cockpit of a Cessna 172 or perhaps swimming in any body of water that she could find. She also has a deep love for buses of all kinds. Please send her buses. mercedes@theautopian.com Instagram: @mistymotors Twitter: @Miss_Mercedes30 Facebook.com/neonspinnazz
Read All My Posts »
PrevPreviousThe 2023 Dodge Charger Super Bee Packs Drag Radials To Send Your Child’s Favorite Toy Straight Through The Rear Window
NextHere’s Some Valiant Ute Wrenchspo For David: Cold StartNext