Good morning, and happy Friday! We’ve made it through another one. To celebrate, we’re looking at a couple of cars outside our normal price cap, and in this case, outside of what you might call normal cars, as well.

Yesterday‘s poll was being a bit of a jerk, so the vote count was low, but astonishingly close:

Wagon by a nose here, it looks like. Not even a nose, just by the tips of those rubber overriders on the front bumper. But we are nothing if not thorough here at Shitbox Showdown, and the “write-in” votes in the comments show the wagon ahead by a little under a two-to-one ratio. So I’m calling it: the wagon wins.

Now then: it’s no secret that we here at the Autopian are big fans of the VW Beetle. And it’s not just our illustrious co-founder and cruise director Jason Torchinsky; I think I’m safe in saying that everyone here has a soft spot for the pluckly little smiley-faced German wonders. One of the Beetle’s greatest attributes is its flexibility: because of its chassis design, you can remove the entire body from the car and have a running, drivable chassis:

Lots of other cars are body-on-frame, but very few have the body shape so divorced from the functional parts of the car. The simple, modular suspension and air-cooled engine are the keys: all the important stuff is self-contained and hung off either end of a flat pan chassis.

The upshot of this is that once you get the iconic VW body shell off, you can put almost any shape you want on it. And with millions of potential donor vehicles out there, it was only a matter of time before aftermarket bodies turned up. And turn up they did, by the thousands. In the ’70s, you could buy kits to turn a VW Beetle chassis into anything from a dune buggy to a Porsche 356 replica to a neo-classic take on a Mercedes SSK. Companies like Bradley and Kelmark and Fiberfab created their own sports/GT designs for Beetle chassis, in some cases upping the ante with equally-ubiquitous Chevy V8 power.

Today, we’ve got a pair of these old kit cars to show you, both finished, and nicely so, from the looks of it. The beauty of kits like this is that they’re still registered and titled as the original Volkswagen donor car, which takes out the DMV hassles. And because any high-performance Beetle parts will fit, the sky’s the limit on upgrading these, making them good long-term tinkerer’s projects. Let’s take a look. 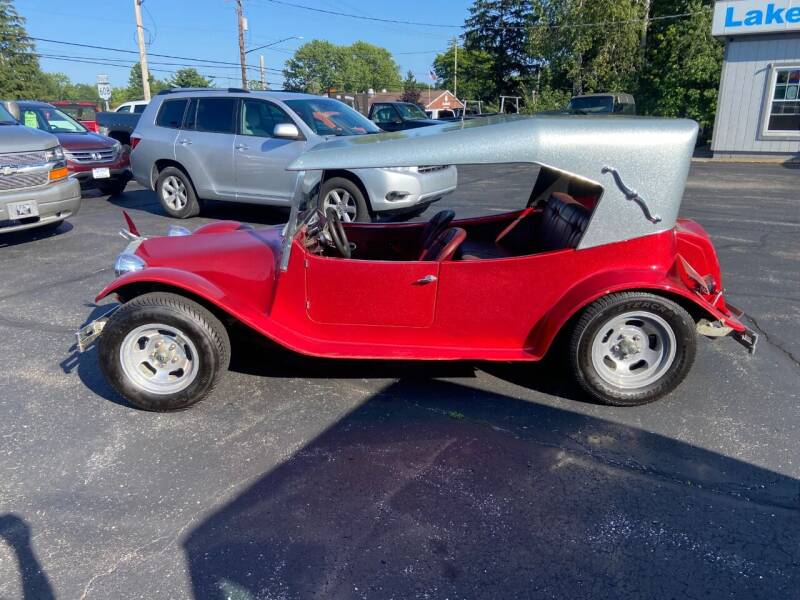 The Maxi Taxi was a product of Bremen Sport Equipment, of Bremen, Indiana. Bremen made several varieties of VW body kits, including the Mini Mark (a neo-classical MG sort of thing), the Citation (a Meyers Manx-style dune buggy with an odd protruding nose) and the wild Sebring sports car, with a huge one-piece canopy that flipped up and forward to access the interior. The charming little Maxi Taxi was meant to evoke the style of old Ford hot rods, but it gives off more of a ’70s carnival-ride vibe, and not in a bad way at all. 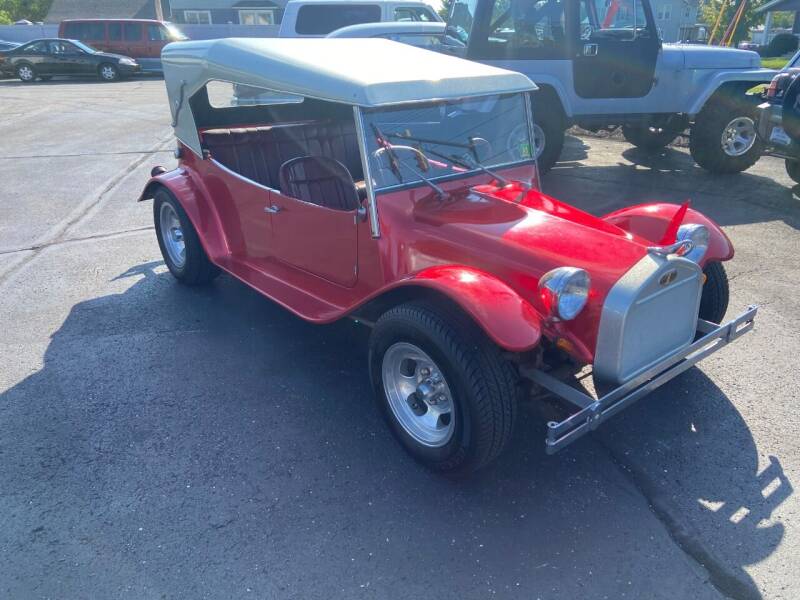 That one-piece fiberglass “radiator” is obviously a dummy, since the engine is air-cooled and in the back. It would look less toy-like if the grille area were at least painted black, I think. The rest of the bodywork is a nice sparkly candy-apple red. These kits were usually sold pre-finished; the color is a gel-coat that’s part of the fiberglass molding process. Gel-coating gives fiberglass parts that characteristic “wet” glossy look. 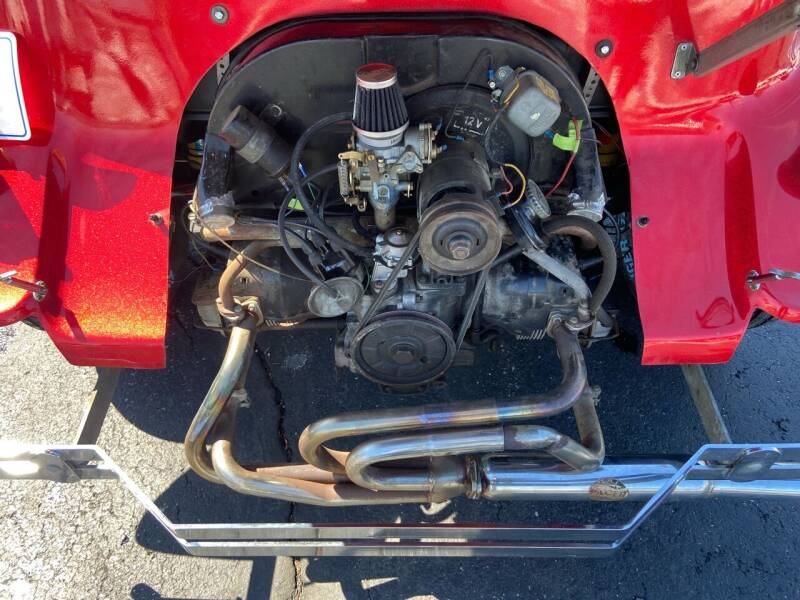 Mechanically, the Maxi Taxi is standard-issue Volkswagen, give or take a few trips to J.C. Whitney. The seller believes it to be a stock 1300cc ’66 Beetle engine. Don’t expect miracles to happen when you step on the gas. Of course, that can all be changed, and this funny-looking little buggy can be hot-rodded to your heart’s content.

The inside looks decent, though the midway-carnival-ride feeling continues. Red vinyl abounds, and a Grant-style aftermarket steering wheel is what you’ll be staring at. This car was just pulled out of storage, so some careful waking up would be prudent. It does have new tires on those cool slot-mag wheels, so that’s a start. 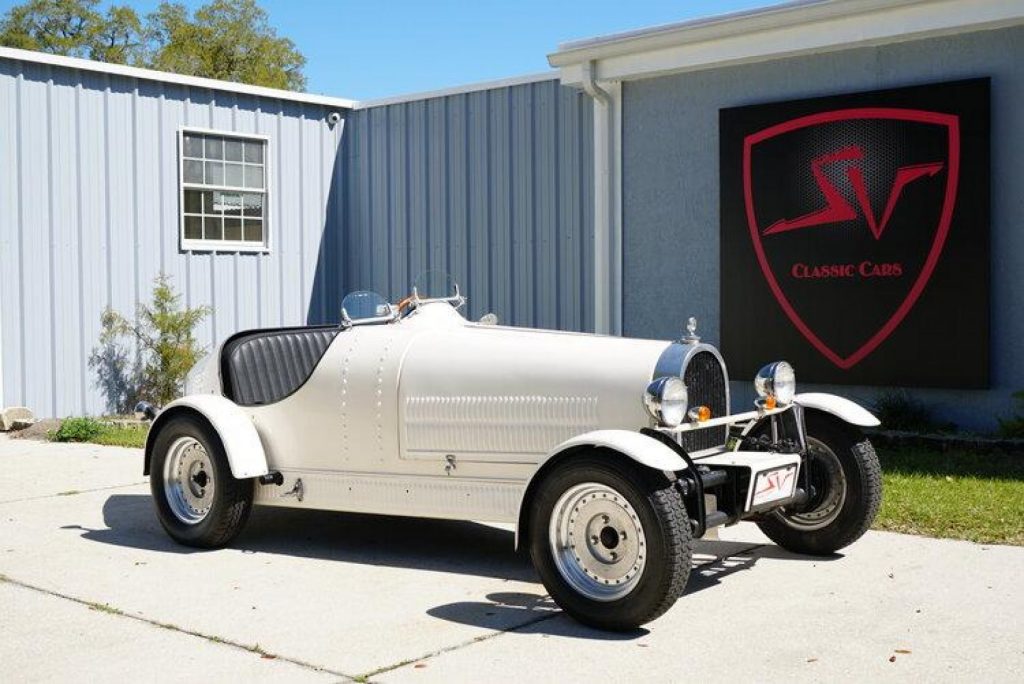 This Bugatti replica was made by Bay Products Corporation of Miami, later known as Tiffany Motor Cars, then as Classic Motor Carriages. CMC appears to still be in business, still making Porsche 356 replicas, though the copyright on the site is ten years old, so maybe not. This Bugatti Type 35 was one of many kits made by Bay Products/CMC over the years, including the Gazelle, the quintessential tacky ’70s kit car, which was available to fit Ford Pinto or Chevrolet Chevette running gear as well as the VW Beetle. 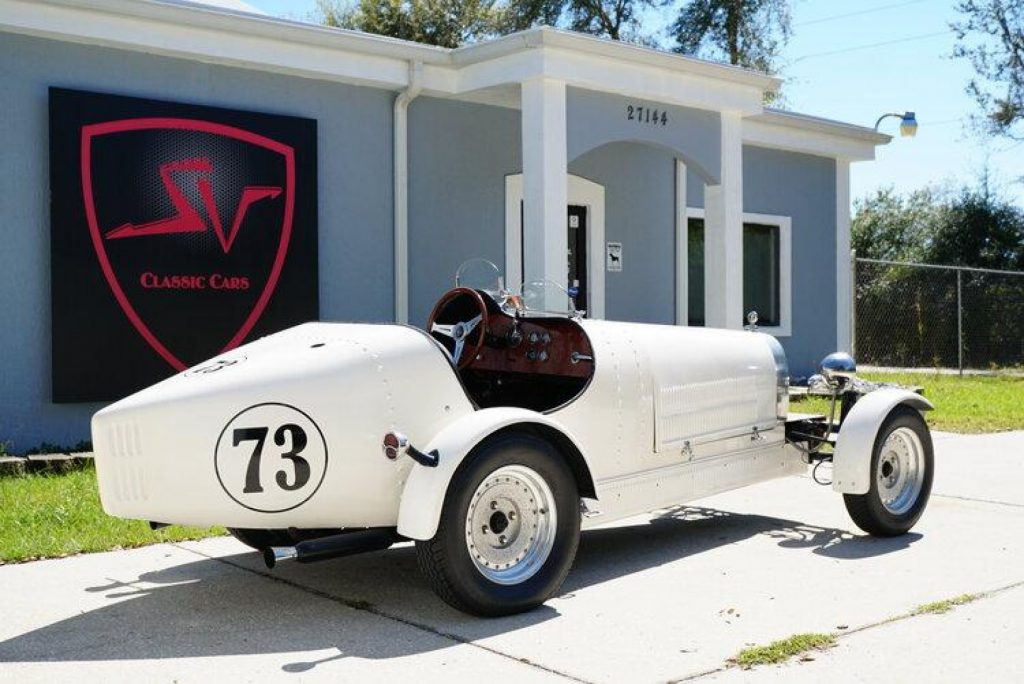 Compared to the Gazelle, this “Buggatti” looks positively classy. This kit required more work to the VW chassis than some other kits; the pan is narrowed, the seating position is moved back (to about where the back seat is in a stock Beetle, it looks like), and the front torsion beam axle – still used today on the VW-based Meyers Manx – has been narrowed. The boat-tail hides the flat-four engine, and under that long hood, where a straight-eight would live in a real Bugatti, is all frunk space. 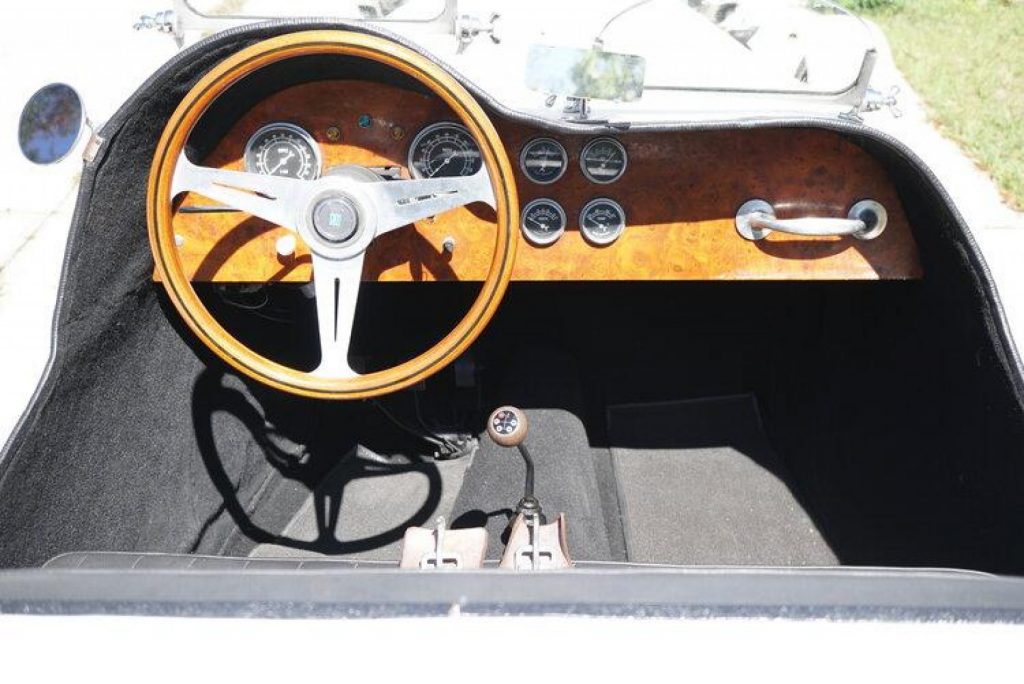 Inside, you get a nice burled wood dash with a full set of instruments, a Nardi steering wheel, and a bench seat with old-timey seatbelts. You’d better like your passenger an awful lot, however; you’ll be rubbing elbows if not more. And hurry home before it rains; there’s no top, and those Brooklands-style windscreens are all you get. 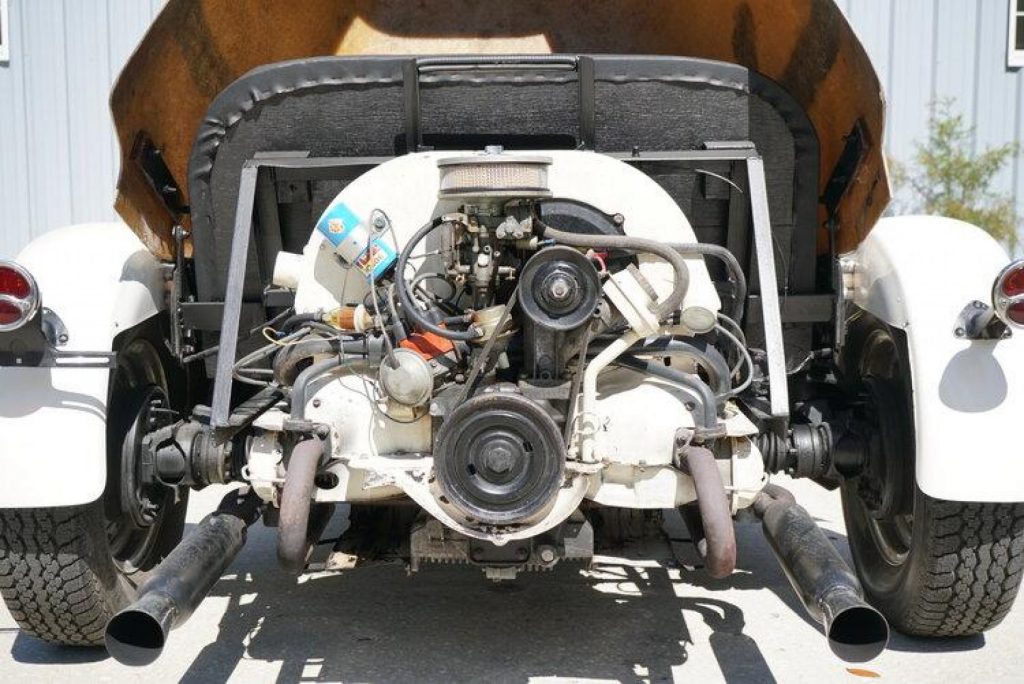 This car has a later 1600cc engine and – unless I’m mistaken – a later trailing-arm rear suspension as well. I guess they didn’t want those cute little cycle fenders hitting the bodywork at full suspension compression.

[Editor’s Note: This looks like a single-port engine to me, so I’d guess an earlier 1600. Also, it does have the double-jointed IRS suspension back there. — JT]

The seller says this car was on display at a restaurant for many years before being put back into service, and lots of work has been done to make it road-worthy again.

I found a bit of interesting trivia while researching this car: a Bay Products VW Bugatti was used by the antagonists in the Ron Howard car-chase flick Grand Theft Auto in 1977. It’s one of those movies I think I saw, but can’t really remember. I think the trailer shows all the good parts.

Well, there they are, two lost classics from the heady days of 1970s kit-car mania. They’re both a lot more expensive than they used to be, but still a bargain for a unique fun weekend toy, if you ask me. But you’re not asking me; I’m asking you. Which one will it be?