I tend to fetishize a number of automotive details, most likely the result of growing up with leaded gasoline and adoring the smell of those old metal-barreled magic markers. Among these details are taillights, turn indicators, door handles, and, of course, trunks. Especially front trunks, now commonly referred to by the portmanteau frunks. You know, like Frookies. Frunks have become quite common on many electric vehicles being made today, thanks to the packaging opportunities made possible by the now nearly ubiquitous skateboard-style EV platforms most carmakers use. And yet, for some reason, one country in particular has carmakers that don’t seem to care about frunks, and I find this odd. That country is Germany, so let’s talk about the seeming Teutonic disinterest in frunks.

Just so we understand how pervasive frunks have gotten in the EV space, here’s a partial list of mainstream EV makers that are selling cars and/or trucks that have some sort of cargo compartment up front: Ford, Tesla, Rivian, Kia, Hyundai, Volvo, Polestar, Chevrolet – there’s a lot. It’s by no means all, but it is a pretty significant number of mainstream EVs. 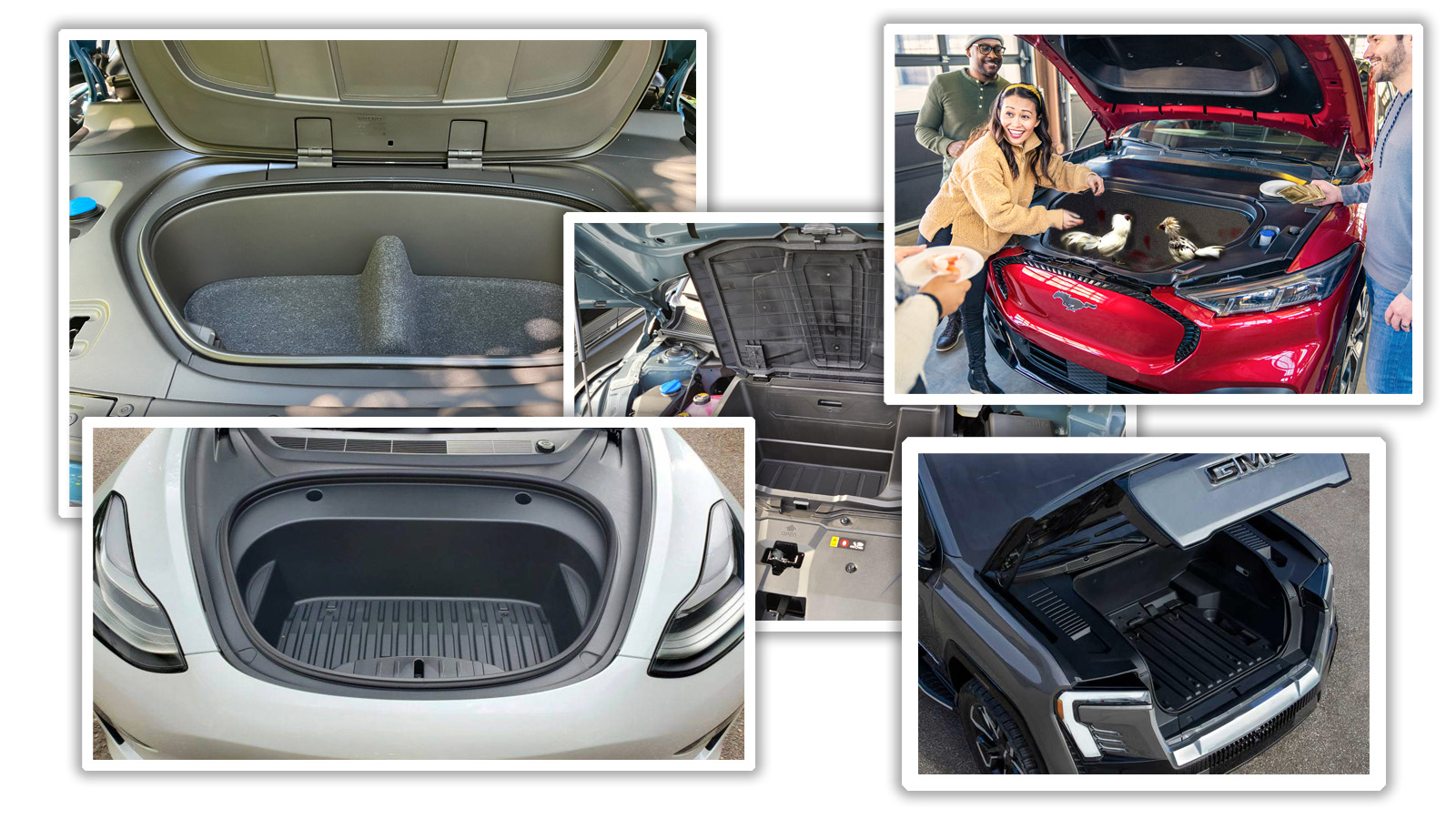 Now, it’s not that these frunks necessarily offer so much extra cargo room (though some, especially the ones found on electric pickup trucks, certainly do) but more that the extra space is useful for things that tend to rattle around in trunks anyway: tire inflation equipment, first aid kits, maybe a blanket, brake fluid bottles, rags, ice scrapers, you know, utility stuff that I bet you have in your car right now.

And, for EVs, there’s always the issue of charging cables. Sure, most EVs, frunked or otherwise, have a compartment beneath the usual cargo area for them, but if you’re on a road trip and you need access to your 120/240V charging cable (and let’s be honest, if you normally charge at home or in public charging points, on a road trip is when you will be most likely to need them) you really don’t want to have to unpack all your stuff just to get to the cables. A separate cargo compartment is great for all this sort of stuff.

They’re just useful! They may not be a deal breaker, but if there’s an open volume of space inside your car somewhere, why shouldn’t it be available for your use?

That’s what bothered me about the Volkswagen ID.4 when I tested it. There absolutely was enough room under that hood to house a useful frunk, and I know this to be true because I tested it out by packing a lot of stuff in it and driving around: 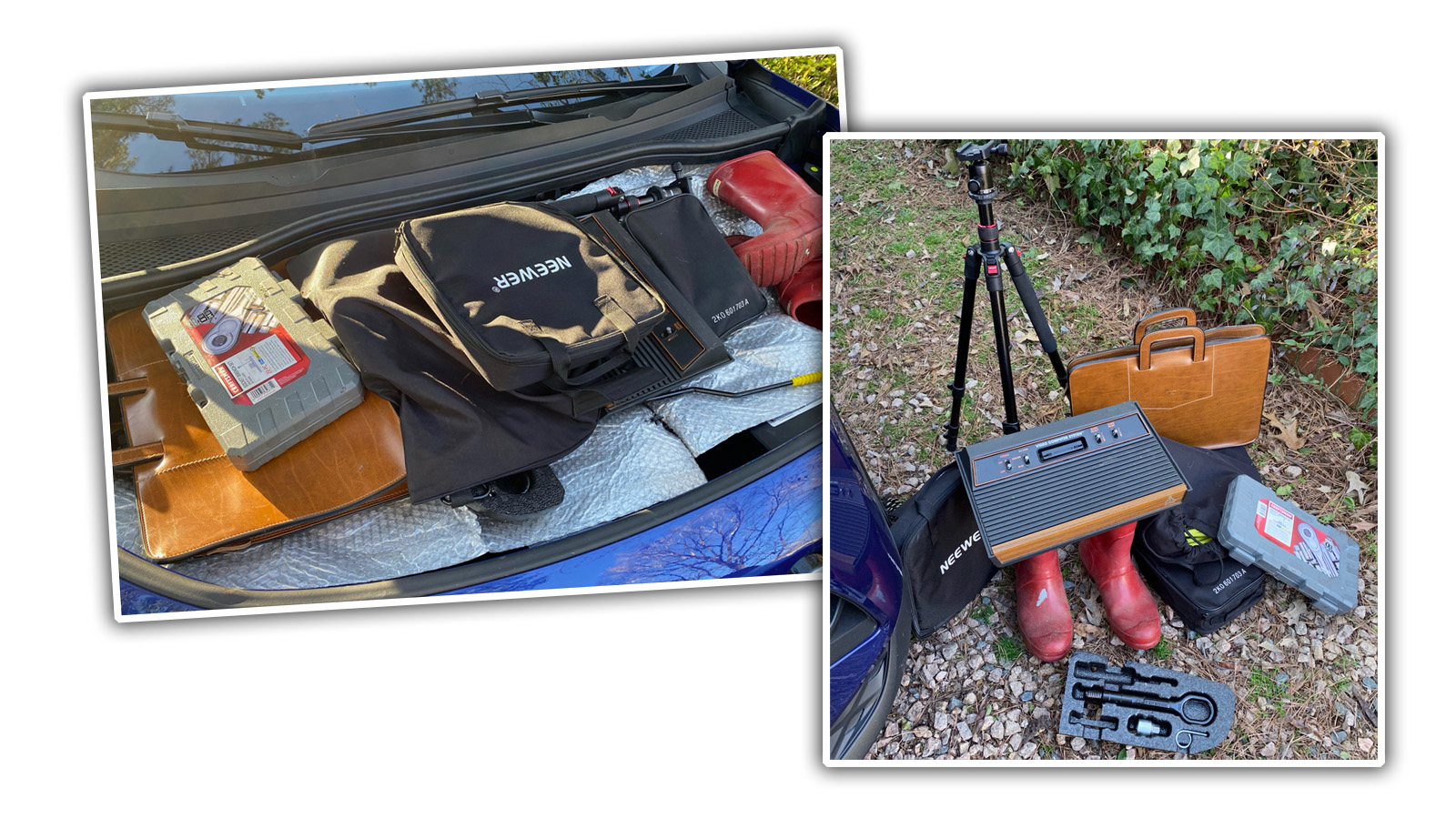 It’s not just me who thinks there could have, perhaps even should have been a frunk in the ID.4. People are talking about it on owner forums, and there’s even some basic frunk kits being sold, made in part from recycling bins:

Clearly, some people agree that there could have been some extra cargo room in there. And it’s not just VW; BMW, which did have a frunk in their first EV, the i3, has gone frunkless for their more recent EVs like the i4, something that has baffled our pal Jason Fenske of Engineering Explained:

He’s right to be frustrated. It’s not like the i4 couldn’t have had a frunk roughly equal in size to the Tesla Model 3’s useful frunk, it’s that BMW just seems to not have bothered. The empty volume is there, as Jason demonstrated on his car, fitting that whole carry-on bag into that open void under the hood. A little bit of hose re-routing and some sort of plastic tub set in there, and boom, the BMW i4 could easily have a front cargo area big enough to be genuinely useful.

So why don’t they? And why does it seem to be primarily German cars – BMW, Mercedes-Benz, Volkswagen – that seem so resolute to not give a damn about frunks? 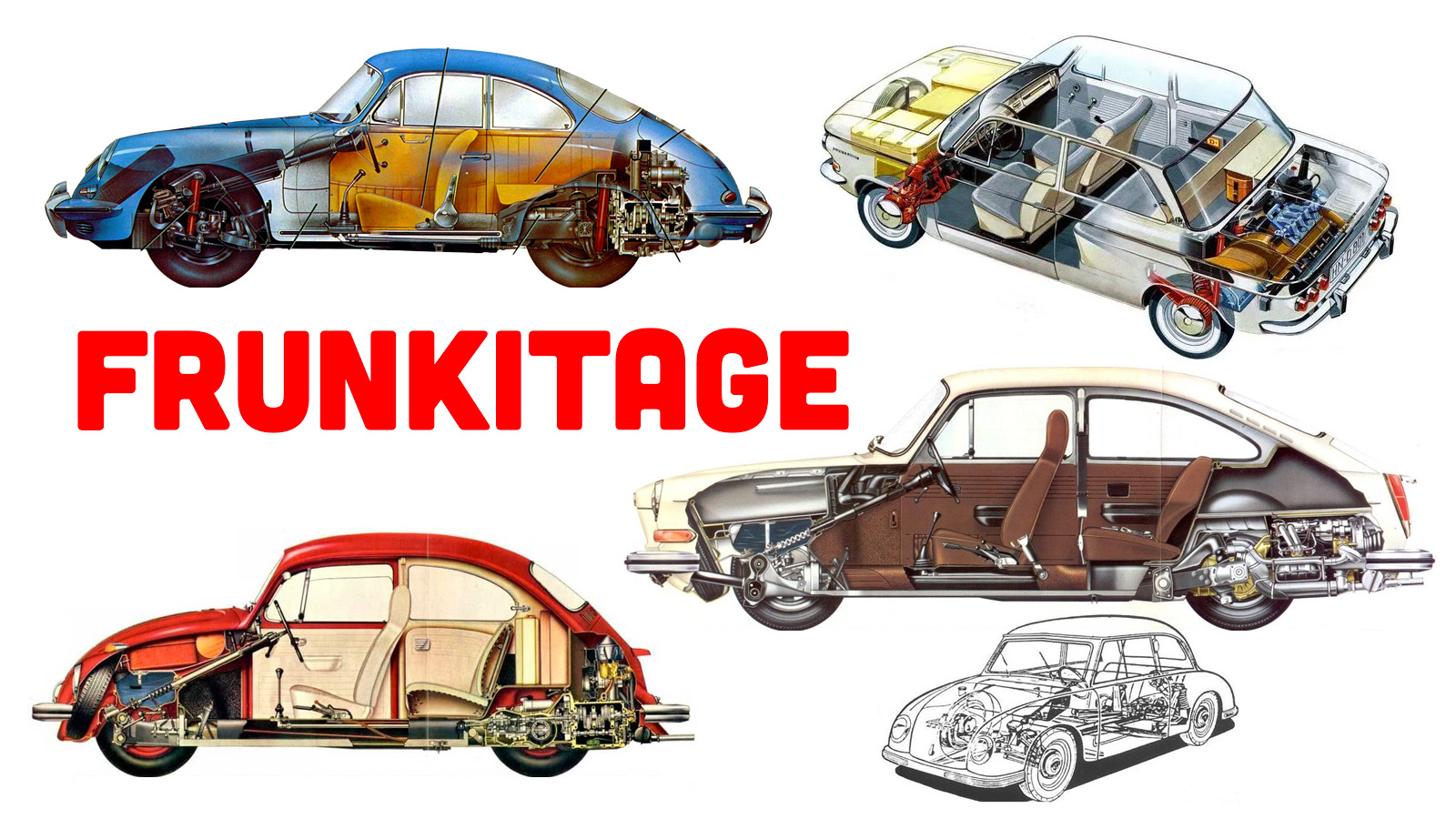 Well, I suppose there is one significant German car exception: Porsche’s Taycan EV does have a frunk, but that makes sense, as Porsche has a long history with frunks. I mean, if you think about it, Germany has likely produced more frunks over automotive history than any other car-making nation, mostly thanks to tens of millions of rear-engined VWs, but there were also Porsches and NSUs and other rear-engined makes, too. They have real funk heritage. Frunkitage. Which just makes the current seeming anti-frunk stance all the stranger.

I get that frunks aren’t free; there are absolutely material and engineering costs associated with installing a frunk. You have to plan out the volume of space, you have to have it lined with some sort of durable material, you need to seal it off enough to keep the contents dry and filth-free, it makes maintenance and repair trickier – there’s more factors than you might think.

And, this would be a fantastic argument for why frunks just aren’t worth the effort, except for the fact that so many other carmakers have, you know, figured it out just fine. And I’m pretty certain that if Kia can solve the complex engineering challenges of being able to store some crap under the hood, BMW can damn well figure it out, too.

I’ve asked representatives of BMW and Volkswagen about this, right to their faces, and I got essentially the same answer from both companies: what the hell do you need a frunk for when we have so much room in back?

I mean, on one level, they’re not wrong; none of the cars I’ve been talking about has a meager trunk or cargo area by any means. VW also said they used that volume to house components to push the passenger volume more forward, and make it larger, and while I suppose that may be true, it’s not like any of the frunked cars have cramped passenger volumes and it doesn’t answer the question of the dead volumes of space present under the hood of the ID.4, for example. 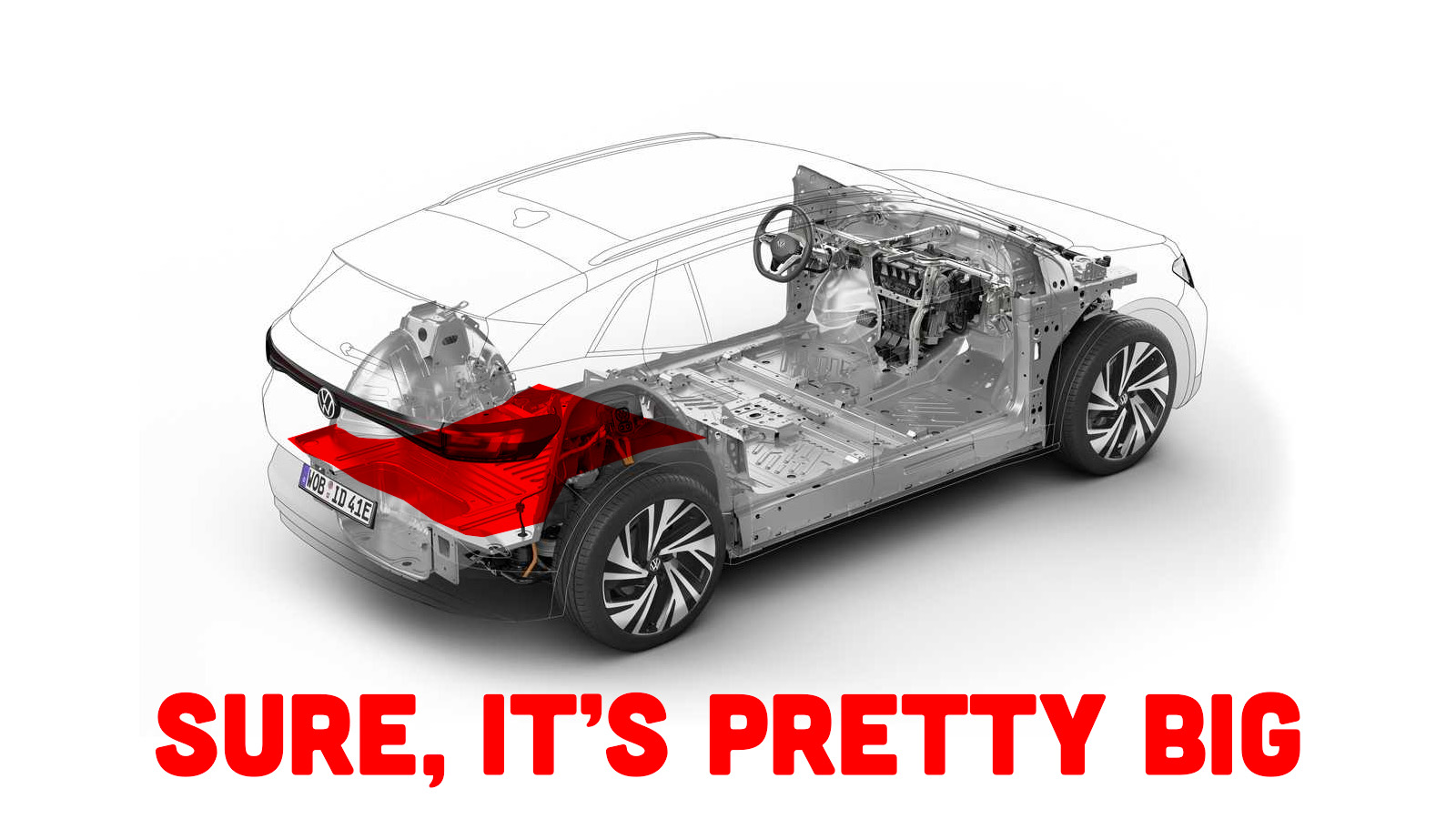 Here’s my problem, though: it doesn’t matter that the rear cargo areas are generous. That’s not the point. When so many other carmakers have figured it out, it feels like those other carmakers give just that much more of a shit about you than the carmakers that didn’t bother to provide any storage at all.

I’m not saying it’s entirely rational; but cars and why we buy them has never been rational. All I know is that when I find that a Hyundai Ionic 5 has carved out a strange, little volume of space up front where i could stash some charging cables or tire chains or wet bathing suits or something like that, I feel like some engineer or packaging designer actually gave a shit, and tried their best to make my experience with the car as good as possible, giving me access to volumes of space in that car because I deserve it, dammit.

With the BMW i4, I’m hauling around a big empty void that nobody at BMW could be bothered with to make useful for me, their dedicated and loyal customer. Something about that rubs me wrong.

I know the strange coincidence of the big German automakers not bothering with frunks isn’t because of engineering issues. If they wanted to, they absolutely could do what carmakers from the US, South Korea, Sweden, and China are doing. And, I suppose you could say the same about Japanese EV makers, though Honda’s new Prologue, based on GM’s Ultium platform, might have one, but so far that’s not been revealed.

There’s some sort of ideological reason going on here. There’s two schools of thought: the customer should get to use whatever volumes of space we can carve out, or the customer doesn’t need some dumb little compartment under the hood. One is a bit more focused on giving the customer options, the other based on steering the customer to what the carmaker thinks is best, or at least good enough.

I think this is worth discussing, and I’ll keep asking the frunkless carmakers, German or otherwise, for their reasoning.

Because someone has to.

I'm a co-founder of the Autopian, the site you're on RIGHT NOW! I'm here to talk to you about taillights until you cry and beg me to stop, which I absolutely will not. Sorry. Hug? Also, David's friend.
Read All My Posts »
PrevPreviousHoly Grails: The First-Generation Chevy Cruze Is Arguably One Of GM’s Most Important Cars
NextThe 2023 Ford Transit Trail Is A Brilliant Blank Canvas For Vanlifers To Build The 4×4 Camper Of Their DreamsNext