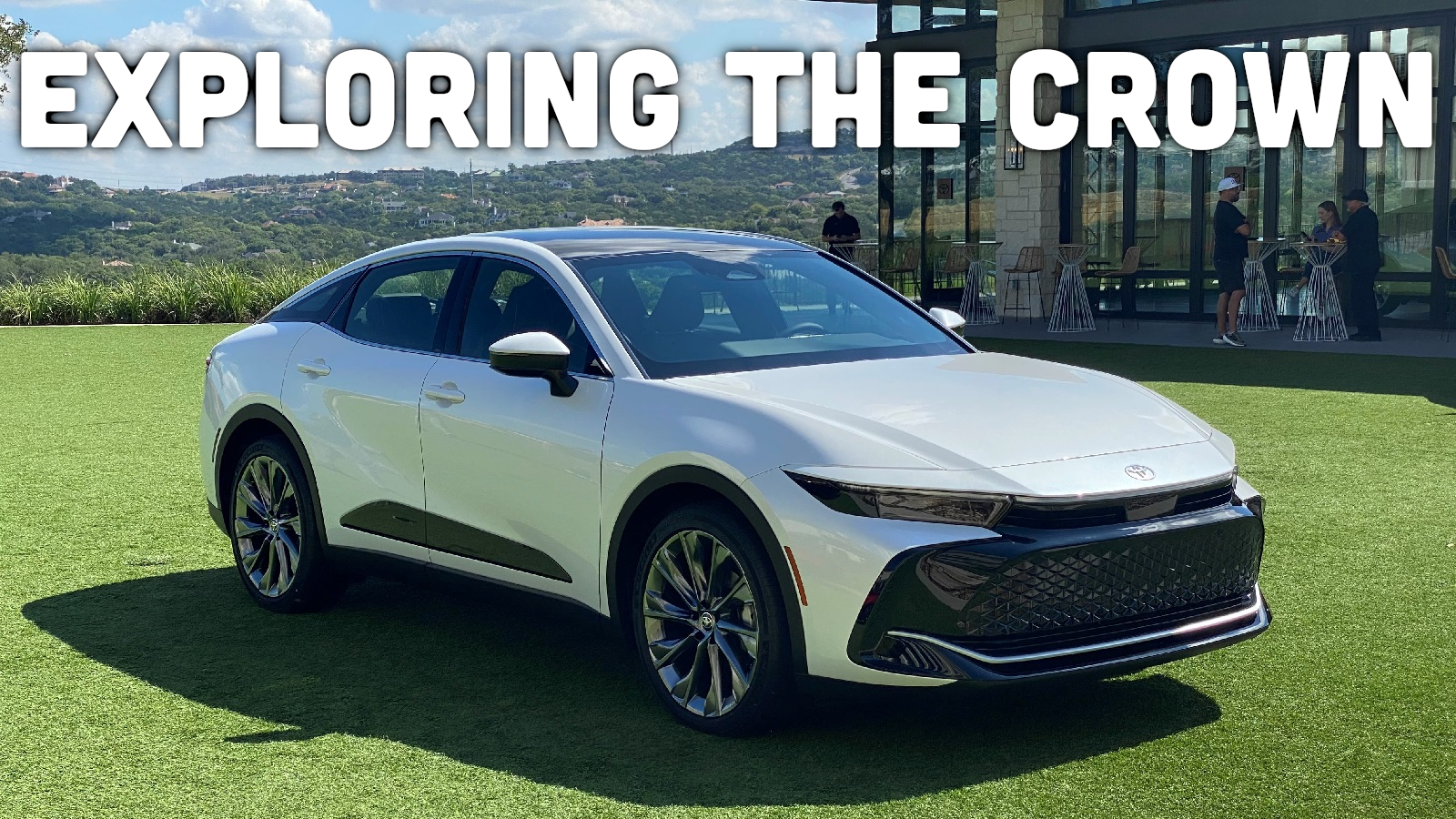 Since the 2023 Toyota Crown’s reveal there have been a lot of questions. What does it look like outside of press images? What is the interior like? And just how high does it sit off of the ground? Before I departed Toyota’s reveal I got to play around with a Crown. Here’s what the 2023 Crown is like in real life.

(Full Disclosure: Toyota invited me to Austin, Texas to attend the Toyota Crown’s reveal. The company paid for my travel and a night in a swanky resort.)

Last week, Toyota made lots of people feel lots of emotions with the unveiling of the new Toyota Crown lineup. America is getting the Crown back after a 50-year absence, but the new car isn’t what some–including myself–expected. The understated luxury sedan that you may know the Crown to be is staying in Japan. The U.S. is getting a lifted sedan or a crossover, depending on whom you ask.

I’ll go over that first since I bet that you’re scratching your head right now. Here in America, Toyota USA is calling the new Crown a full-size sedan with elevated ride height. I asked Toyota’s representatives about this, and they told me that lifting the Crown serves the kind of customer who doesn’t want to get down into a sedan or lift themselves out of one. Giving the Crown the ride height of a crossover means that drivers can slide in and out with ease. Toyota USA only uses the word “crossover” as a comparison for the Crown’s height.

After the U.S. release of the Crown, I eventually retired to my hotel room, where I watched the car’s global release. While we’re getting just this Crown, Japan is getting four. The full lineup is the Crown Crossover Type, Crown Sport Type, Crown Sedan Type, and Crown Estate Type.

That Sedan Type is the Crown that I expected the U.S. to get, and based on the responses to my first story on this, is the one that many of our readers expected, too. But it makes sense that we’re not getting that Crown. Remember when Volkswagen tried to sell the Phaeton in America?

You’ve probably noticed by now, but the Crown that we’re getting in America is labeled as Crossover Type in Japan — Toyota in Japan is indeed calling it a crossover. Toyota USA’s reps didn’t have an explanation for the difference in labeling, but said that we’re getting this Crown because it’s believed that this one would sell the best out of the four.

Regardless if it’s called a crossover or lifted sedan, this is the Crown that we’re getting. And from my reading of the comments here and elsewhere, people want to know what it’s like in real life. Toyota’s press images are neat, but weirdly, don’t provide a decent view of the interior or give you a sense of how large the car actually is.

Let’s start with the exterior.

Toyota says that the Crown sits at 60.6 inches tall over a Camry’s 56.9 inches. And its length is about two inches shorter than the current Avalon. Missing from Toyota’s measurements was ground clearance. I asked about that and was told that figures for ground clearance will be released sometime in the future.

I tried to figure out the clearance myself using my phone. My smartphone comes in at roughly 6 inches tall with its case on. I started taking rough measurements from the vehicle’s underbody. From the lowest underbody tray that I found I got roughly eight inches.

The design certainly seems to be a mix of crossover and sedan. It’s bulky like a crossover, but the greenhouse screams sedan. Crowns in all trim levels but Platinum come painted in a single color. With the car painted in one color you can see all of the quirks in the design. There’s a huge–and largely closed–black grille up front, almost exaggerated hips, and a simple rear.

However, you can see where the car was designed to be two-tone. Panels flank the trunk that are black on the two-tone Platinum trim.

In other markets, Toyota’s logo takes a backseat to the Crown’s unique badging. That isn’t the case here and Toyota tells me that it’s because the Crown name has no real equity in America.

And yes, that’s just a normal trunk. Given the rear’s look, I originally thought there was a hatch there. At least the trunk goes deep and the rear seats can be folded if necessary.

My immediate thought is that this is a return of the AMC Eagle or Subaru Legacy Outback. It’s a vehicle in the shape of a sedan, but jacked up and riding high. I also noticed that there’s a considerable gap between the Crown’s brake rotors and the inside of the wheels. These wheels get as large as 21 inches on the Platinum trim. I keep going back to thinking that going down a few inches on the wheels and giving this machine all-terrains would make it look epic. Add in skid plates and off-road lights and you have a desert runner. Toyota, purveyor of the TRD Off-Road Rav4, will not be doing an off-road version, but I hope that someone does.

Let’s move to the interior.

Many people know the Crown to be stealthy luxury vehicle; basically a sedan with a Lexus-quality materials but Toyota looks. To me, this falls short of Lexus, but it’s still pretty nice in there. The interior was roomy, the seats felt comfortable, and some surfaces felt good to the touch.

However, if you’re expecting a lavish interior this isn’t exactly the vehicle for that.

The interior isn’t flashy and the most luxurious feature is heated seating for the rear. It even has a little more hard plastic than I expected.

If I had to compare to another vehicle in Toyota’s lineup, it felt like a high-spec Camry, with the biggest upgrade being the 12.3-inch infotainment screen. Other highlights would be the copper trim and glass roof.

Toyota says this car is not replacing the departing Avalon, but I can see the customer for this car being similar. It sits high off of the ground and it’s comfortable. But maybe the two-tone Platinum might attract a younger buyer who is looking for something with funky looks.

We also know a little more about the Crown’s specs. The hybrid system is powered by a new nickel-metal-hydride battery pack. Crowns with the base 2.5-liter four hybrid setup will get 236 HP and up to 38 mpg combined. The Platinum and its 2.4-liter turbo four hybrid makes 340 HP with up to 28 mpg combined.

Pricing hasn’t been announced, either, but a starting price in the ballpark of $50,000 seems like a fair guess. This comes from asking others at the event what they were told and what they think. The JDM Crown Crossover will start at about the equivalent of $31,400, with the top trim having a starting price of $46,200. Hopefully, we’re wrong!

But in person, the looks have grown on me. Sure, the Crown isn’t the executive sedan that I thought it was, but I like it. In a world where so many cars are identical blobs, this stands out. I’m sure it will be a fine replacement for the Avalon and I actually can’t wait to see if it drives as odd as it looks.

Mercedes is a lifelong fan of all things powered by an engine. When she isn't driving one of her five Smart Fortwos or her 14 other vehicles she could be found in the cockpit of a Cessna 172 or perhaps swimming in any body of water that she could find. She also has a deep love for buses of all kinds. Please send her buses. mercedes@theautopian.com Instagram: @mistymotors Twitter: @Miss_Mercedes30 Facebook.com/neonspinnazz
Read All My Posts »
PrevPreviousOur Daydreaming Designer Imagines He’s David Tracy Buying A 1987 Jeepster That Never Existed
NextCold Start: I Don’t Feel SafeNext