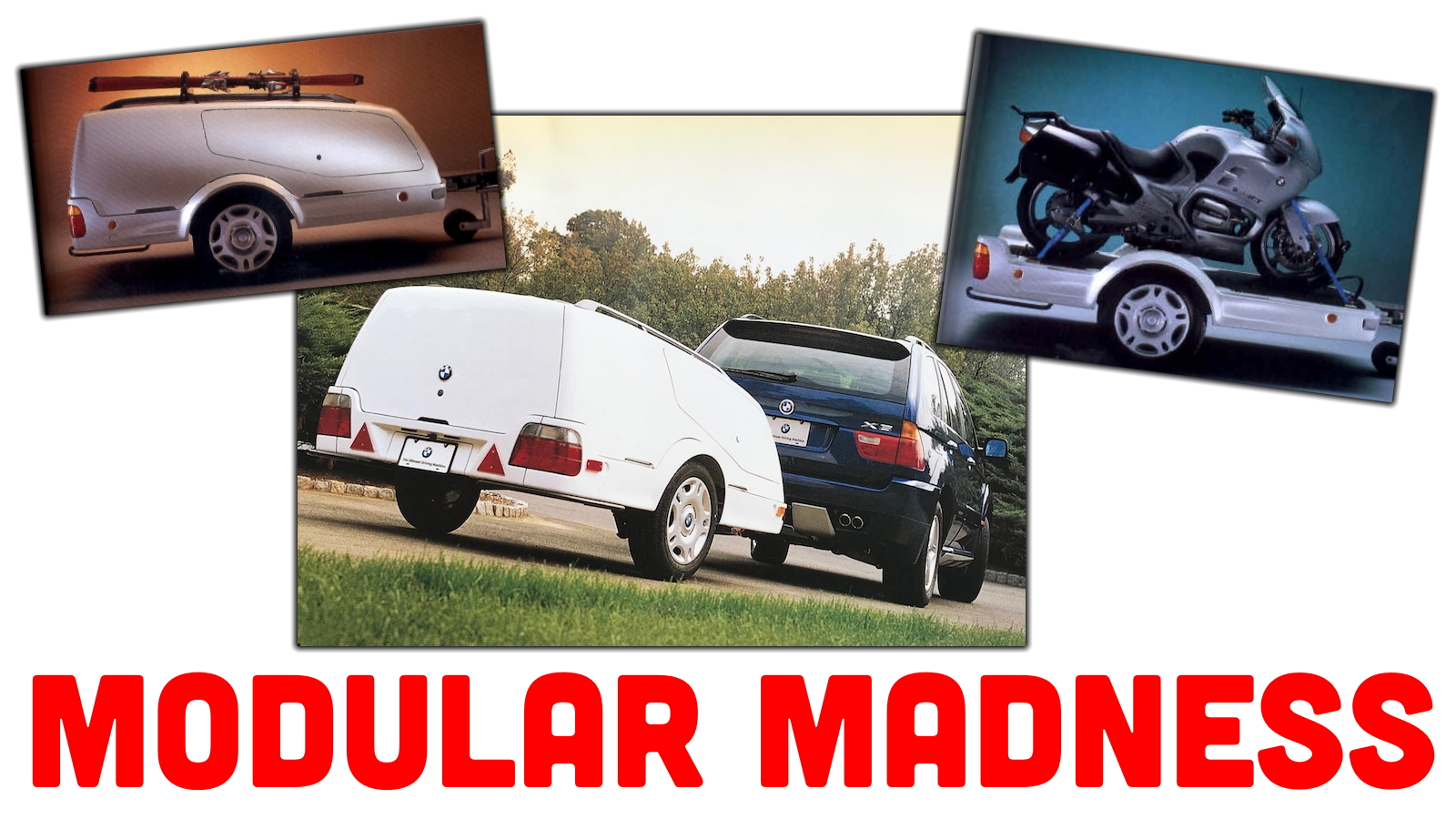 I love it when car manufacturers stop making sense. Giving in to dreams gave us the Isuzu Vehicross, the Volkswagen Phaeton, and the Cadillac CTS-V Wagon. While the pursuit of some dreams result in great success, most don’t quite land in the marketplace. Take the Nissan Pulsar NX, a modular car that could be a liftback coupe or a shooting brake depending on which hatch was installed. Despite modular cars never catching on, someone from BMW presumably took a look at a Nissan Pulsar NX and thought something along the lines of “what if we did that, but with a trailer?” Say hello to the BMW Multi-Trailer, one of the weirdest OEM accessories of the Y2K era.

So what exactly is the Multi-Trailer? Well, it’s a sleek flatbed trailer offered through BMW dealerships around the turn of the 21st century. Manufactured by Westfalia, the trailer incorporates bespoke tail lights that tie in nicely with BMW’s ‘90s styling language and has a nice handy slot for storing optional loading ramps below deck. Simply drop the number plate panel, slide the ramps in, and you’re on your way. The Multi-Trailer’s brakes are simple drums, although a 5x120mm bolt pattern allows for fitment of popular OEM BMW wheels. As for suspension, it’s a lot more sophisticated than the leaf spring setups commonly seen on small trailers. If we take a look at a handy parts diagram, we’ll see that the BMW Multi-Trailer is actually suspended by coil springs and divorced dampers using a semi-trailing arm suspension setup. Weird. [Editor’s Note: This is incredible. Trailers usually use very, very simple leaf-sprung solid axles. -DT]

Why would anyone do this? Conventional wisdom is that weight is better distributed through the length of a semi-elliptical leaf spring setup than through a coil spring. However, this is BMW we’re talking about, a company known for doing the wrong things to often achieve desired outcomes. This is a company that’s only ever arranged six cylinders in a straight line for passenger car use, packaging be damned. A company that stuck with MacPherson strut front suspension despite the camber curve benefits of double-wishbone or multi-link arrangements. Sure, running plastic cooling systems at two bar and automating a six-speed manual gearbox didn’t work out so well, but BMW was really experimenting around the dawn of the new millennium. Independent rear suspension allows for better individual wheel control than a live axle and thus a smoother ride. Considering this trailer was meant to be pulled behind luxury cars, a smooth ride seems important to clientele.

Despite the independent rear suspension and the fancy bodywork, the Multi-Trailer weighed a reasonable 235 kg, or roughly 518 pounds. Taking a maximum gross weight of 1,000 kg (2,204.6 pounds) into account, that leaves a maximum load capacity of 765 kg (1,686 pounds). However, trailer weight could easily pile up if a client started adding options to the trailer, and this trailer had more options than a Pizza Hut buffet.

BMW may be famous for its cars, but the Bavarian brand made its name through its motorcycles. While an F650 sounds like a fun way to get outdoors, hours of highway riding on a dual-sport bike requires titanium butt cheeks. Thankfully, BMW thought of that and made a motorcycle kit for the Multi-Trailer. Consisting of a front wheel hoop and some tie-down hardware, it honestly looks like a great way to pull a bike behind a sports sedan. If a customer preferred their bikes to be human-powered, anchors compatible with bike racks were on offer so that Multi-Trailer owners could tow the world’s bulkiest bike rack.

A more useful option was the optional canopy which turned this motorcycle hauler into a lockable storage container that wouldn’t clip the beams in an underground parking garage. Plus, the canopy had roof rails so that all manner of roof rack attachments were compatible. Bike racks, snowboard racks, a roof box, you name it. With this canopy, the Multi-Trailer offered the utility of two trailers in the footprint of one. Pretty handy for anyone with limited space. Best of all, the canopy was painted the same Alpine White as the trailer, and both could be resprayed to match your BMW.

So why didn’t the Multi-Trailer take off? For starters, removing and installing the optional canopy sounds tricky. The weight of that attachable hard shell clocked in a hefty 75 kilograms, or roughly 165 pounds. It seems difficult enough to remove the hard shell due to its cumbersome size, so weighing as much as an adult human likely didn’t help. BMW did offer a cable lift system and a kit to attach the cables to the shell, but that only makes removal easier rather than easy full-stop. Then there’s a matter of cost. According to a period brochure, the Multi-Trailer carried an MSRP of $3,600 without any of the fixings. Because modular things are like baked potatoes, you’re going to want lots of fixings.

First, a disclaimer. The following list prices come from Maximilian Importing Company, a BMW parts store that offers a pretty close clone of BMW’s parts catalog. The BMW 2002 community seems to have liked the company for a long time, so I’ll give them a fair shake and say that their prices are most likely accurate. As with any parts prices, a common caveat applies: dealer may sell for less, dealer may sell for more, dealer may say that there’s no way in hell it’s stocking this stuff.

Let’s start with the most basic addition to any flatbed trailer, a loading ramp. If you wanted the correct one that stows neatly below deck, you’d be looking at an additional $514.65. It makes the motorcycle kit look like chump change at $176.75, doesn’t it? Speaking of accouterments on the more reasonable end of the spectrum, Transport Module 1 retailed for $129.60, while Transport Module 2 retailed for $152.73. However, even the pricey loading ramp pales in comparison for the retail price I found for the really cool enclosed canopy. Maximilian Importing Company quotes the list price of the Multi-Trailer canopy at $2,940. You could probably buy two clapped-out Bavarias for that sort of money back when Good Charlotte released Little Things. Only a particular sort of customer would likely put up with that level of expense, so it shouldn’t be a huge surprise that the Multi-Trailer was marked as “ENDED” in BMW’s parts catalog in 2004. Still, if you find one up for sale and happen to own something like an E39 5-Series, why not pick up the ultimate Y2K BMW accessory?

Thomas is a Nu Rave-blaring, heel-toe downshifting, maple syrup-swilling, chassis-geeking, junkyard parts-hauling, floppy-haired scenester who's been writing about cars since college. His current ride is a 2006 BMW 325i with the six-speed manual gearbox. Instagram: @thomas.hundal Twitter: @thomashundal
Read All My Posts »
PrevPreviousI Just Drove By The Chrysler Technical Center, Where I Worked With 11,000 People Before The Pandemic. It’s An Eerie Ghost Town
NextThe Entire Autopian Staff Is Hosting A Car Show In LA On August 13 And We Want You ThereNext