Facebook-f Twitter Instagram Rss
Menu
Menu
Home » I Just Drove By The Chrysler Technical Center, Where I Worked With 11,000 People Before The Pandemic. It’s An Eerie Ghost Town

I Just Drove By The Chrysler Technical Center, Where I Worked With 11,000 People Before The Pandemic. It’s An Eerie Ghost Town 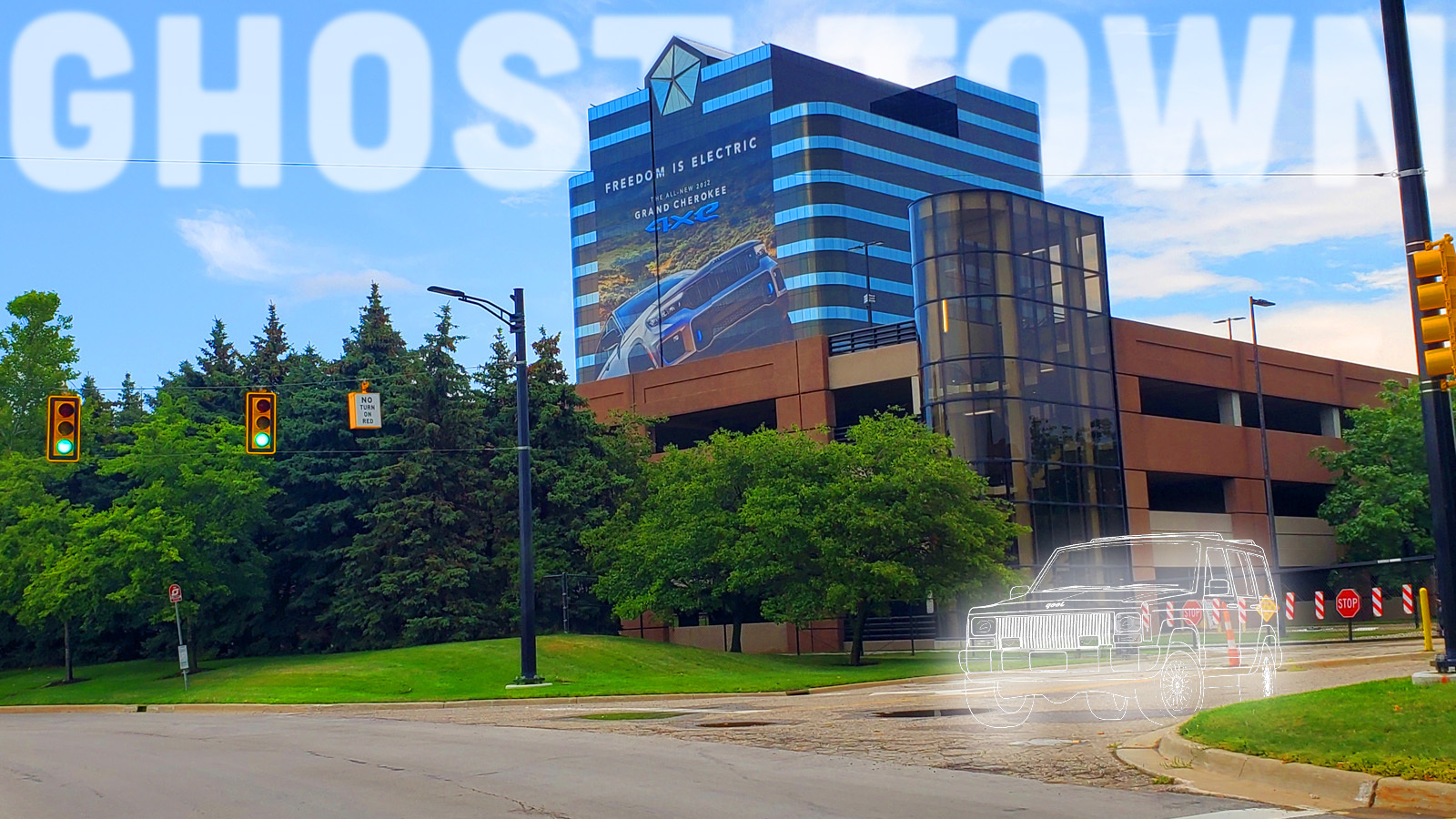 “Crap crap crap,” I needed to find parking; I was running late for the 8 A.M. Jeep Wrangler mild hybrid thermal system meeting that I was leading. “There’s a spot! No, wait. There’s a Fiat 500 in it!” Eventually, after a long search, I parked my Jeep Cherokee XJ on the top of the full parking garage, then sprinted by the enormous, chock-full lot on the north side of the world’s second largest office building, the Chrysler Technical Center in Auburn Hills, Michigan. I stood in line at the turnstiles, swiped my card, and tried to avoid bumping into any of the khaki-wearing engineers whose hands wrapped around the extended batteries of their oversize laptops. This was my normal morning at the bustling “CTC” back when I worked there between 2013 and 2015. The energy was palpable; recent college graduates like myself were leading entire teams trying to build some of Chrysler’s greatest products ever. It was a golden era when every desk was filled, the microwave in the hallway had a line of folks waiting to heat up leftovers, and finding open offices for your cooling system meetings was a downright chore. Things aren’t like that anymore — not even close, as I just found when I stopped by my former workplace yesterday. It looked like a ghost town.

I think we all know deep down that the COVID-19 pandemic changed the world permanently. Some of us are a bit in denial, hoping that things return to how they once were. Perhaps the idea of such rapid and uncontrolled change scares us — instills in us a realization that the firm bedrock upon which we’d built our entire worldview is — and, really, always was — actually a fragile foundation endlessly teetering in unstable equilibrium. 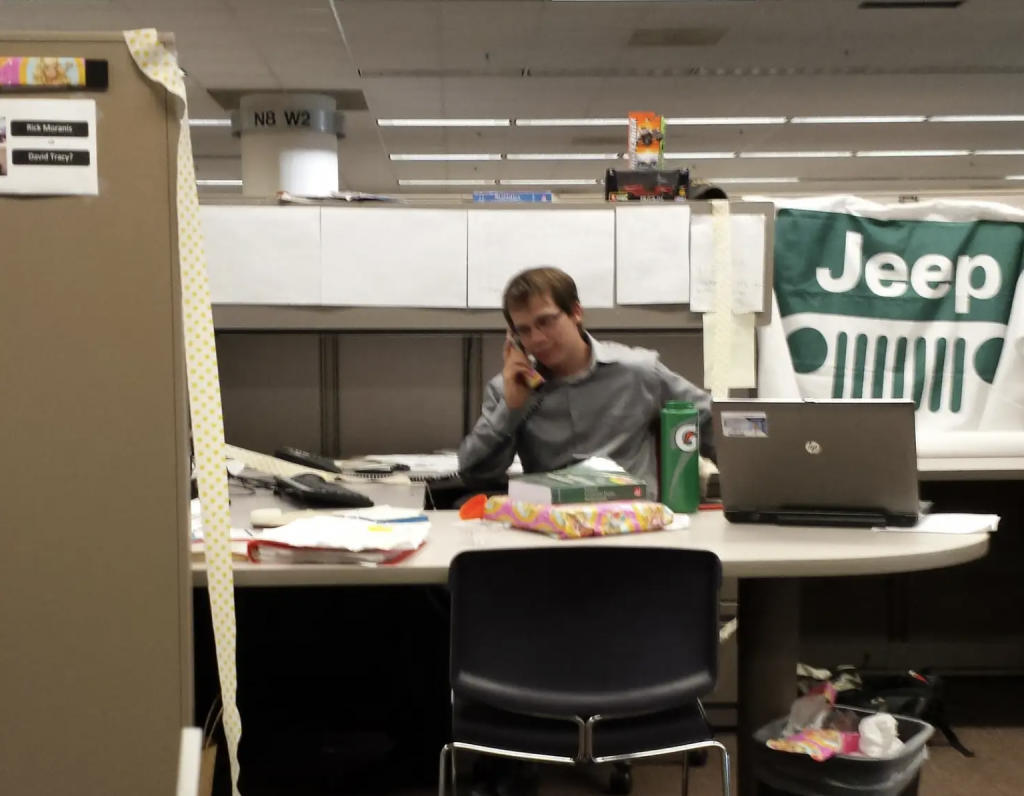 These are the thoughts that shot through my head the other day as I drove past my former workplace, the Chrysler Tech Center — a 5.4 million square-foot headquarters meant to house some of the most talented automotive engineers, designers, businesspeople, and technicians on the planet. And entire car company under a single roof. It was hard to shake off the melancholy, even though I know that many people are happier working from home these days; mine wasn’t a particularly logical emotional reaction, but then, feelings rarely are.

I remember feeling similarly when I lived on the east side of Detroit and regularly drove through completely abandoned neighborhoods. Why was that so upsetting? The people in those homes hadn’t died, they’d just moved 25 miles north to the ‘burbs. They’re probably driving their Jeep Grand Cherokees to Whole Foods right now, doing just fine. 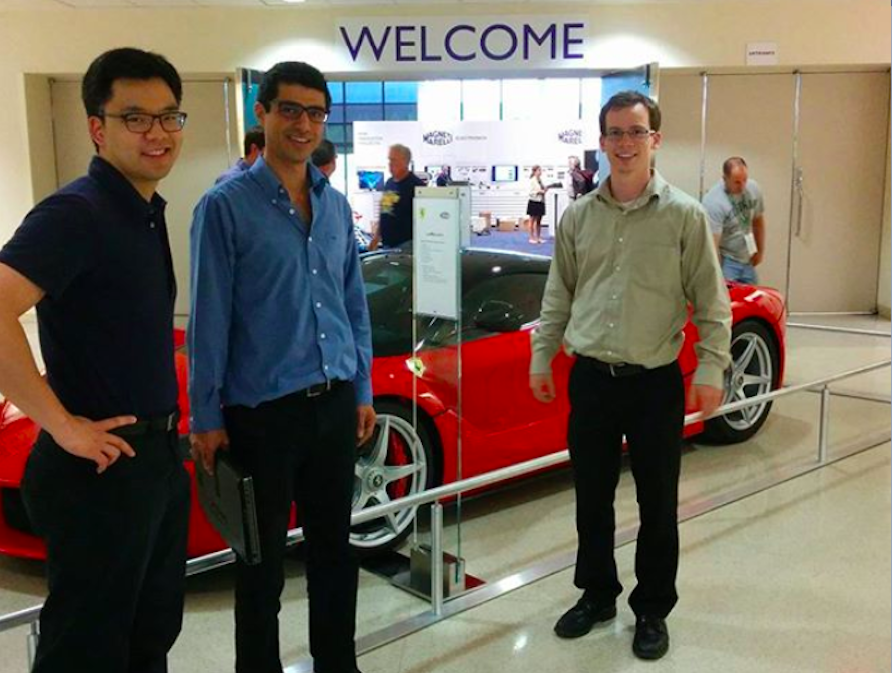 I think, on some level, it’s just nostalgia — humans’ bizarre illusion that things before were much better even when they really weren’t. Driving down the east side’s Schoenherr Road or through run-down Belle Isle, and thinking about how the once-booming neighborhoods and once-bustling park now sat derelict — there was just something sad about that, just as there was something sad about looking at the CTC and its empty parking lot. A fall from grace.

But I don’t think it was pure nostalgia, because I think part of what made me feel sad in both cases was knowing that the reasons for these exoduses involved immeasurable suffering. Racial conflict in one case, and a pandemic that has killed millions of people in the other. An empty building itself isn’t sad — buildings don’t have feelings — but the context that causes change is impossible to divorce from the change itself.

I don’t mean to imply any sort of equivalency between Detroit’s plight and Chrysler’s workers now logging in on their computers remotely, nor do I want to make it seem like this even matters in the context of over 6 million people perishing from the earth, but it’s just something that’s on my mind: The Chrysler Technical Center in Auburn Hills will never be the same. It will almost certainly never be filled with 11,000 engineers, designers, marketers, PR professionals, and technicians. That experience that my friends and I share trying to figure out how to build cars, all together in that one high-energy building, is gone forever. Engineers will swing by Chrysler’s (err, Stellantis’s) facilities whenever they need to interact with hardware (i.e. testing and other physical assessments), or when they need to fill up their M-plate’s gas tank (free gas!), [Editor’s Note: Wait, you got free gas? – JT]  but by and large, the Chrysler Technical Center will remain largely empty. Any attempt to force employees back into the office will almost certainly be met with resistance. People want to see their families more and deal with awful commutes less. I don’t think Chrysler wants to risk losing talent by requiring in-person attendance, so it’s no surprise that rumors have been swirling about Chrysler leasing out parts of the Tech Center as office space.

Anyway, back to my visit to the Tech Center; see this area at the very back of the enormous parking lot? This is where people who don’t drive Chrysler vehicles had to park, and then walk far in the cold Michigan winters. Yes, Chrysler punished you if you didn’t drive their cars; it’s pretty silly. Now instead of cool JDM machines and VW GTIs, there are literally zero cars there: 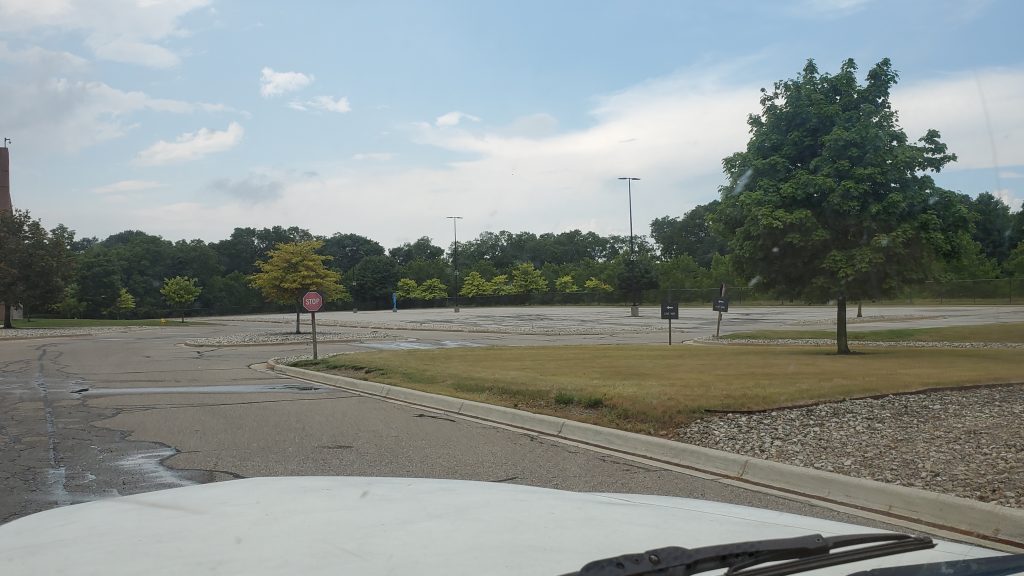 Here’s the big parking garage that was almost always full — there’s not a whole lot going on in there: 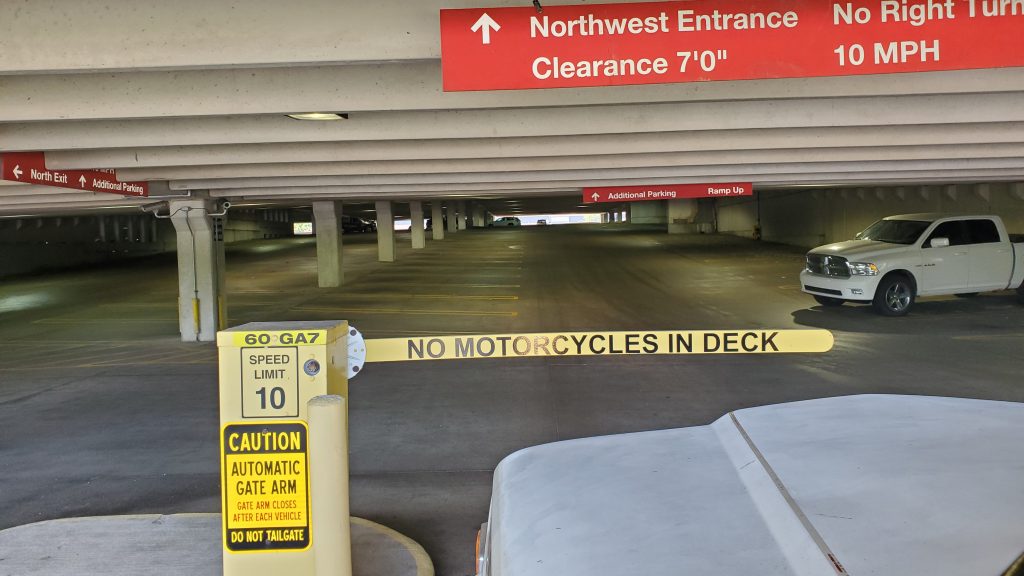 This is the main lot on the north side. At 3:30 on a Thursday, this place used to be packed: 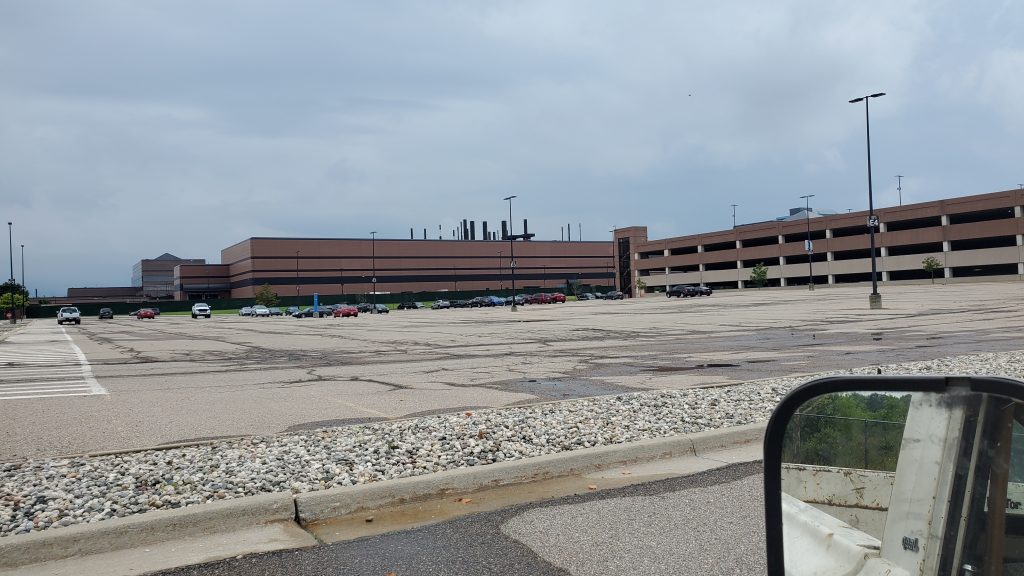 And what do we have here? Looks like at least eight competitive vehicles in the Chrysler-only lot! This would not have stood pre-pandemic; it was a crime that I’m pretty sure was punishable by death — or at the very least, a month of solitary confinement in a 2007 Dodge Caliber. Or an hour in a climatic chamber. 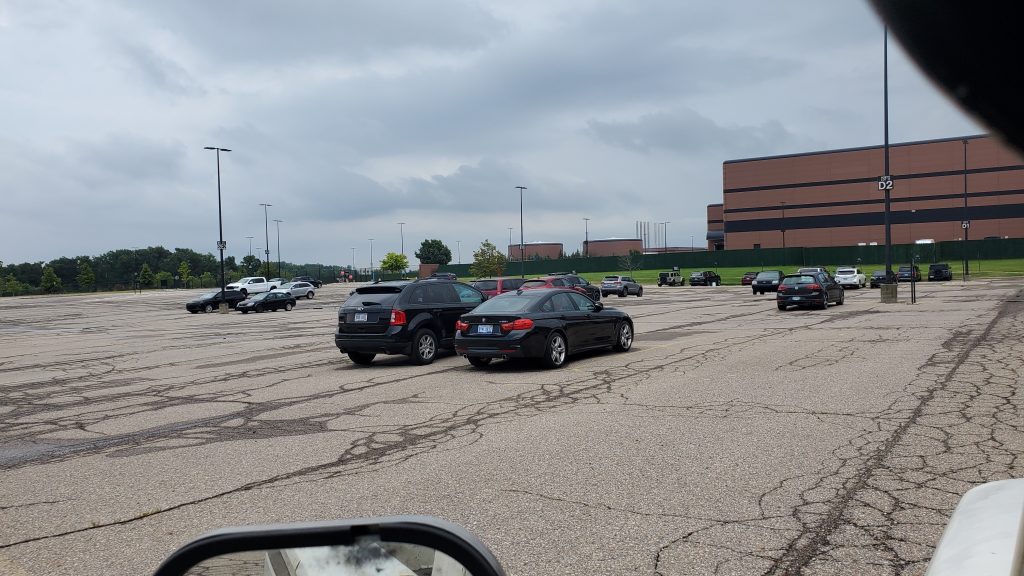 Look at these prime parking spots right near the entrance — these would be full back in the day, and folks would be walking around this area, some trying to avoid being attacked by Canada Geese (each year, Chrysler’s HR team sent out an email warning employees about the aggressive Canada Geese on the property). 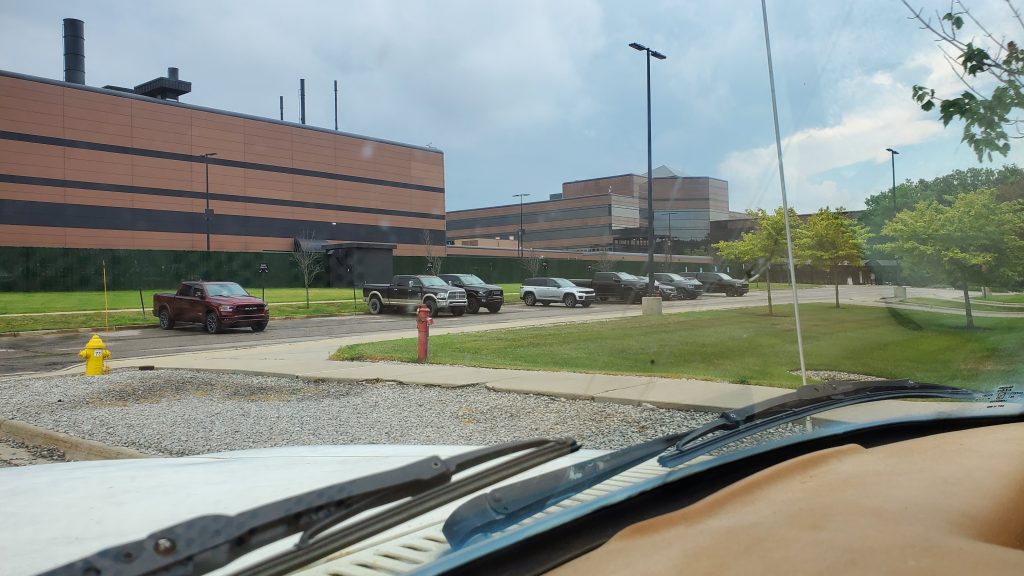 The south entrance on the other side of the building had a few more cars in the lot, since this is where the engine/vehicle testing happens. Plus, that’s where the thermal simulation team hangs out, and trust me: Those are some hard-working folks. Still, the lot was mostly empty: 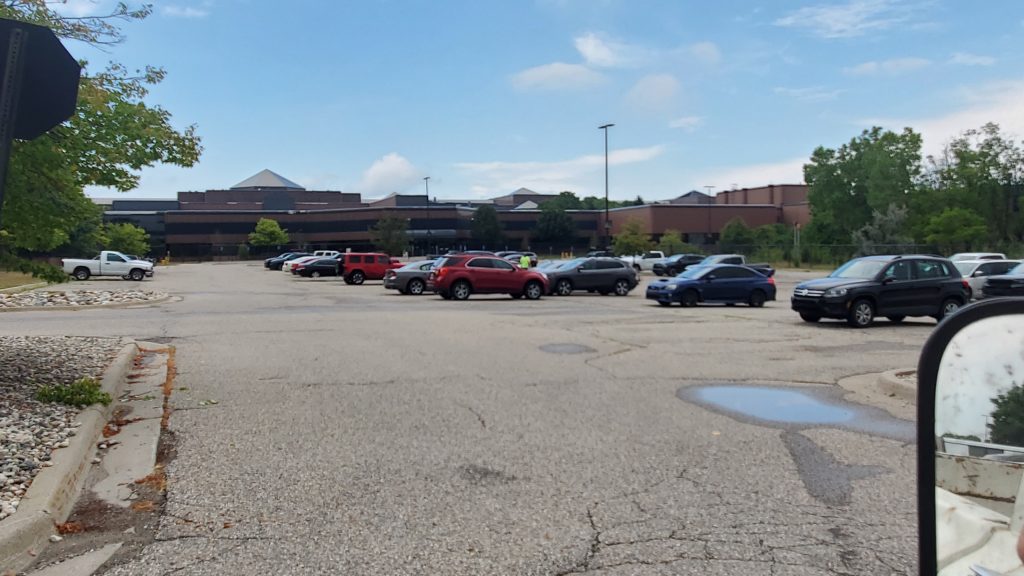 Obviously, what I’m describing here doesn’t just apply to Chrysler. I stopped by Ford’s HQ a few months back, and saw that the company was apparently using the employee parking lot as a staging yard for new vehicles. Just look at this sea of new Fords: 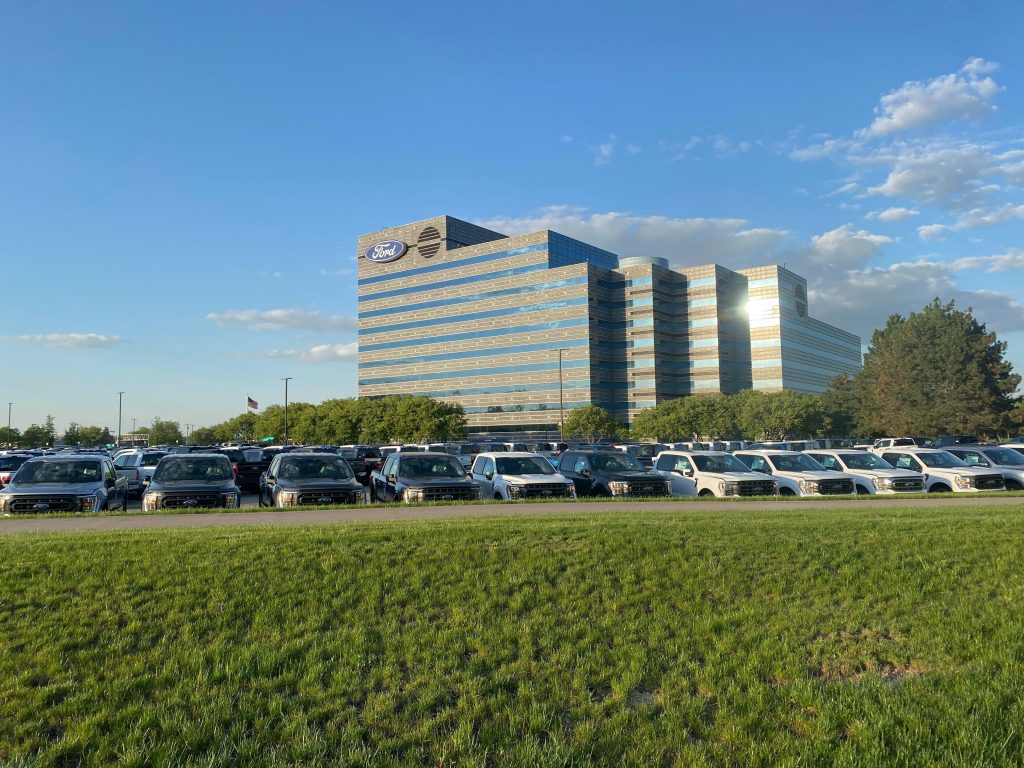 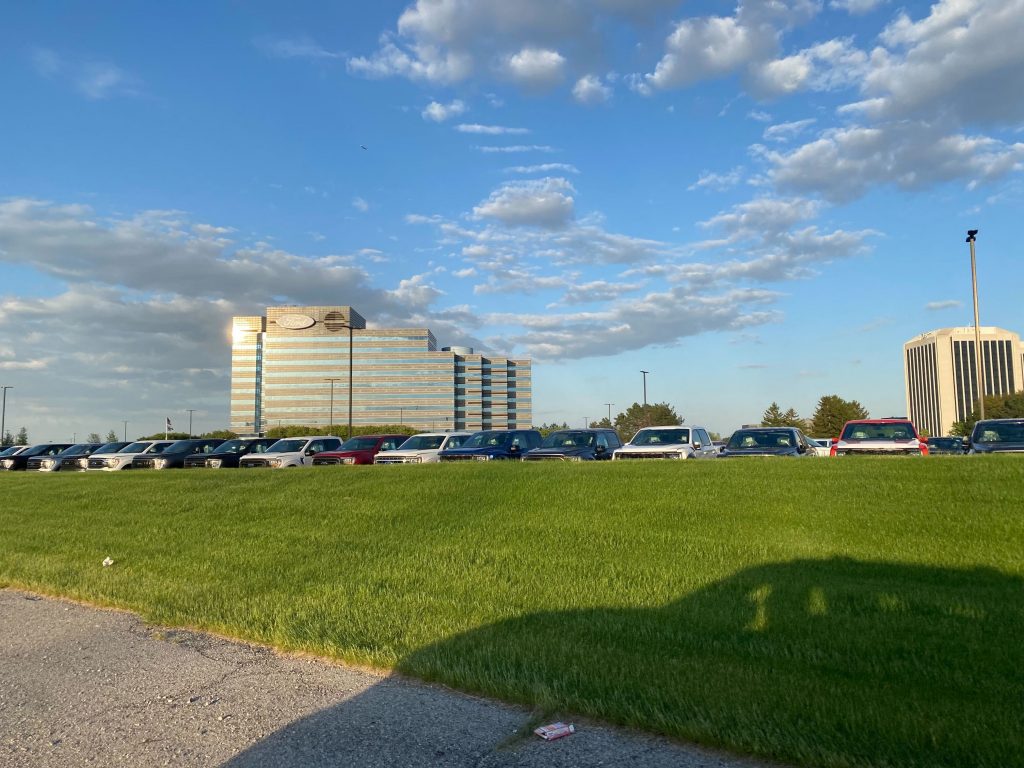 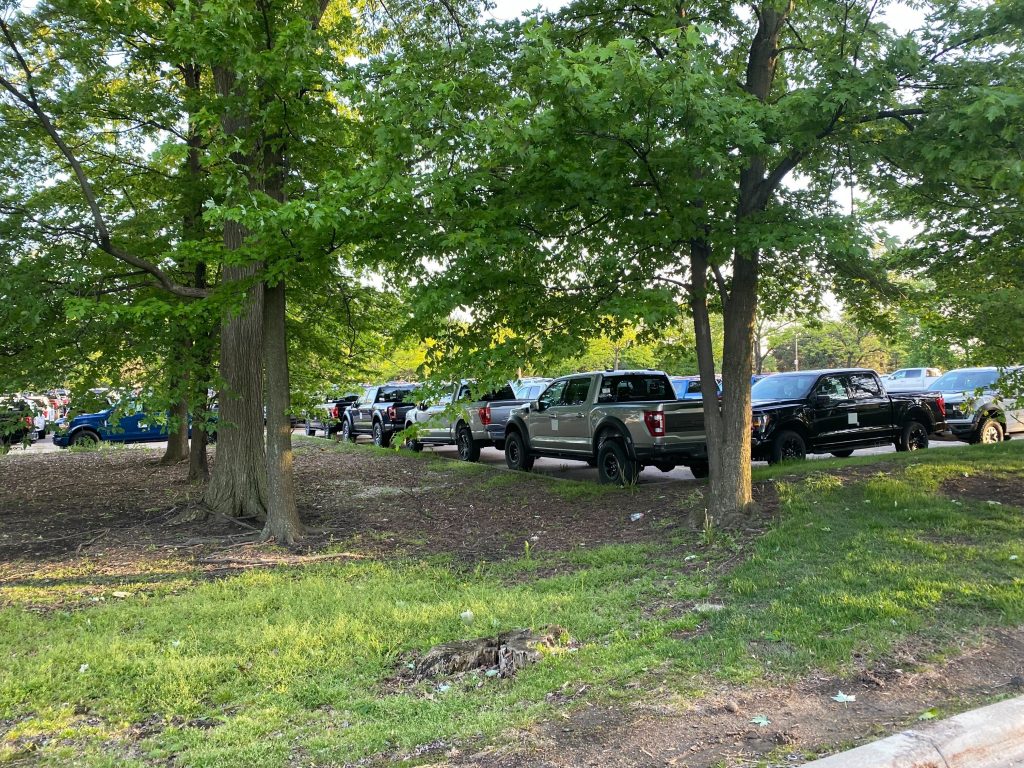 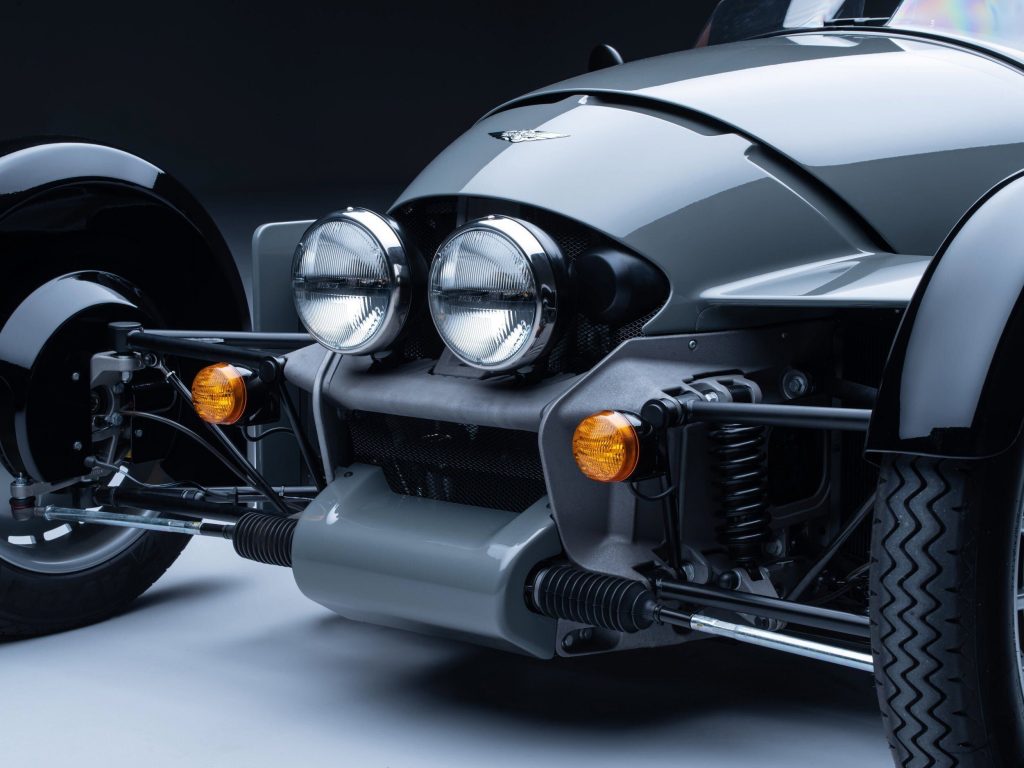 A huge part of of many our lives — where and how we work — has changed forever. Offices all around the world have become ghost towns, and the big, energetic workplace is, in many cases, gone forever. And while there’s a nostalgic aspect to this that makes me a bit sad, the dominant feelings as I stood there in an empty lot of the second largest office building on earth (second to the Pentagon) — where I’d once worked — were: 1. This world can pivot in an instant, and whatever control I thought I had over that was an illusion and 2. Socially, this is a huge change.

I already talked about the first point involving “control.” I think many of us have struggled with this post-pandemic. The second one is something we have to come to grips with, too: In some ways, the world has become less social. I’ve been working online for the past seven years, and before the pandemic I began thinking about changing that — about returning to a real office. There’s just no substitute for in-person human interaction, and now, during a large part of our day, many of us won’t get that. To me, that daily interaction that I used to have with scores of people at the Chrysler Technical Center had a lot of inherent value. It wasn’t just that I was around people during those eight hours a day, it was that being with them tended to facilitate the growth of friendships outside of work. Even after I left Chrysler, I still hung out with the friends I’d made there, and they regularly introduced me to many new people whom they’d met at the office. Since the pandemic, I don’t see that same level of interaction — folks don’t seem to be hanging out with their coworkers like before. What once represented a great opportunity to build relationships has shriveled. 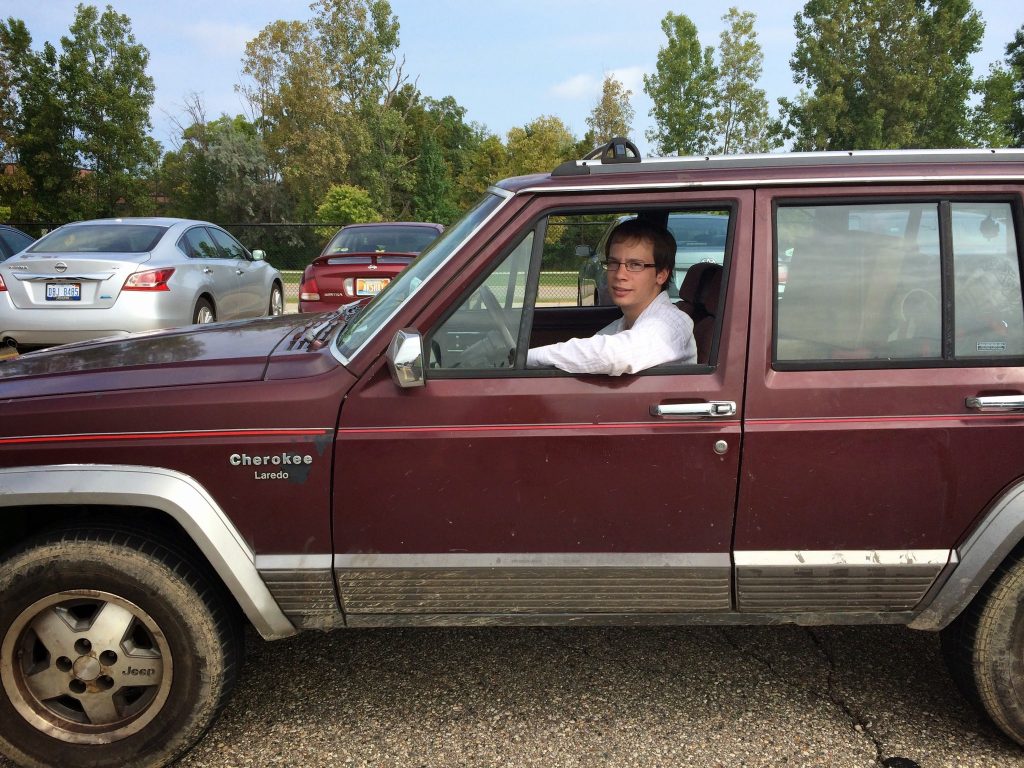 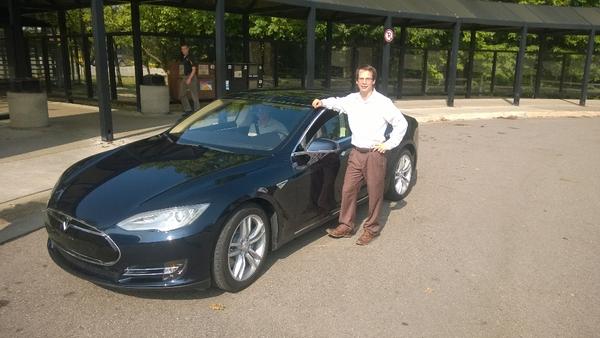 None of this is a complaint, and certainly, many folks (especially those with families and sweet houses) are loving this new setup, and I think that’s great. I just wanted to talk about what it was like to travel back to that Tech Center, because standing there in that lot and seeing tumbleweeds blow across the once-thriving workplace was a powerful reminder of just how capricious this world can be.