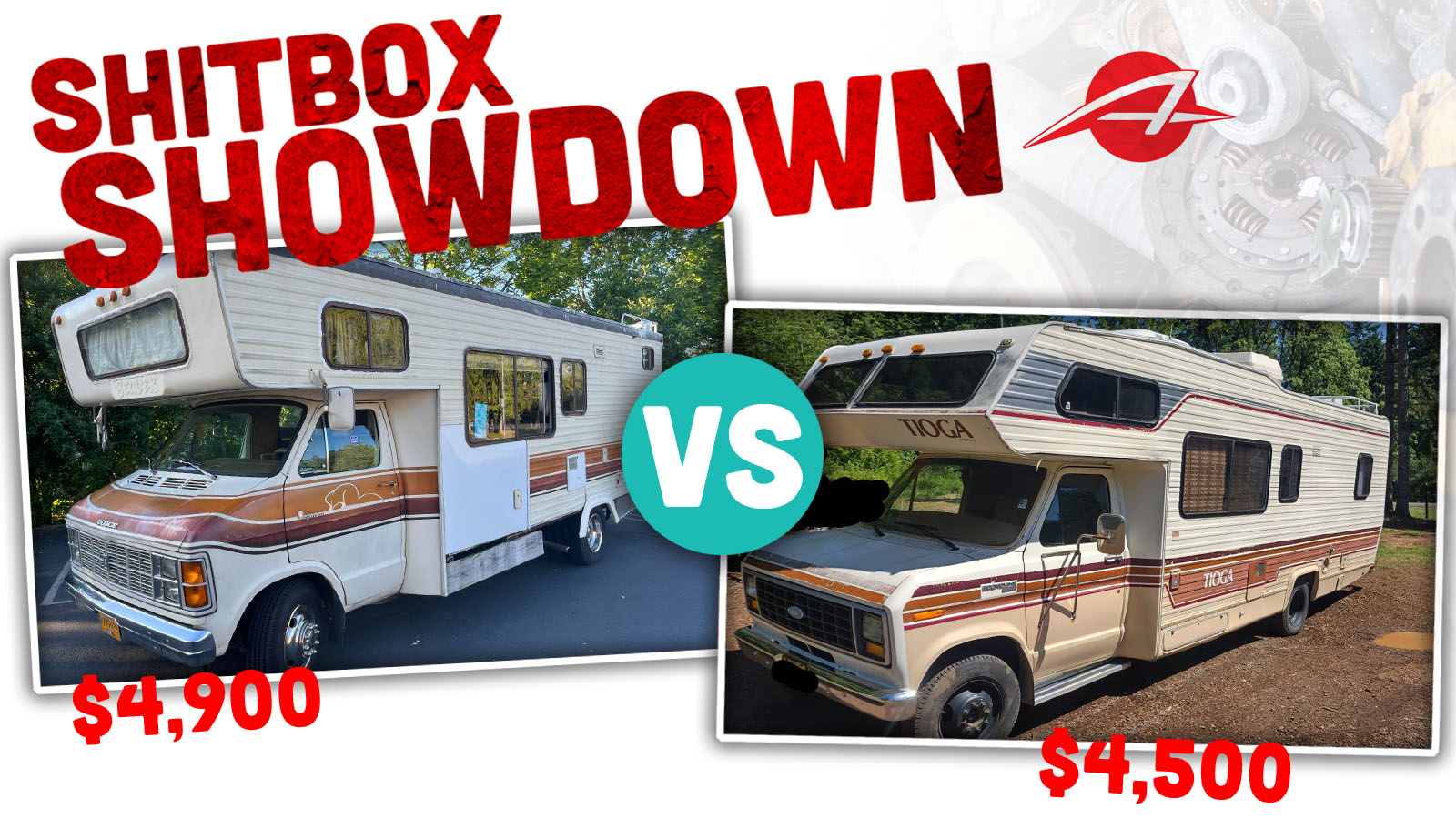 Happy Friday, Autopians! I hope you all had a better week than I did. Let’s just say I’m glad to see the this week disappearing in the mirror. It’s a summertime three-day weekend, so what better time to look at RVs? But before we get to them, let’s check in on our hard-working little trucks from yesterday:

As I suspected, a Toyota truck is hard to beat for that price. I still like the idea of that D50 for a small-town handyman or mobile mechanic or something. That Toyota is still up for sale as of this writing, so whoever wants it, get on up to Washington and get it.

We here at the Autopian seem to be a fairly pro-RV bunch. Mercedes has her little U-Haul camper, and a couple attempted bus conversions before that, I’m pretty sure Torch still has a broken-down motorhome [Editor’s Note: Yes, I do. It even has all-new plumbing, so you can shit in it, you just can’t really go anywhere in it physically. But you can take your bowels for a spin! – JT] , and I am willing to bet that David has slept in a Jeep or five over the years. My wife and I looked at several motorhomes that wouldn’t pass smog before settling on our little vintage Aristocrat trailer.

It’s not a bad way to travel, as long as you’re not trying to pilot one of those massive land behemoths with a Suzuki Vitara in tow. Keep it down to a manageable size, and RVing, whether self-powered or towed, can be a lot of fun.

I’ve thought about featuring RVs a couple of times during the regular daily Showdowns, but let’s face it: Nobody wants a sub-$2500 RV. Most of them don’t even bear thinking about. But I was curious: what would twice that get you these days? And lo and behold, I found two more-or-less viable candidates practically in my own back yard, both drivable, and both just a little under $5,000. Let’s check them out. 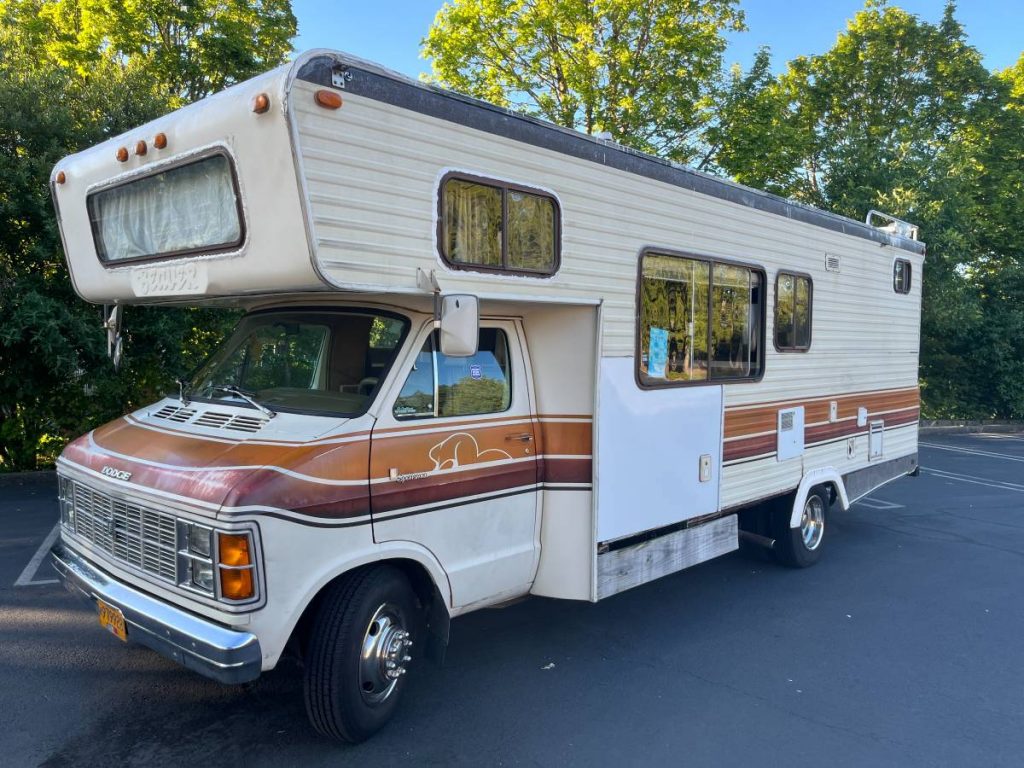 The Dodge B-series vans were incredibly popular for the basis for RV conversions. Pop-top campers, high-ceiling fiberglass top campers (perfect for Tupperware demonstrations!), and larger Class C motorhomes like this one frequently had Dodge origins. This one is a slightly later model, with the refreshed front sheetmetal, and it’s too new for the celebrated 440 cubic inch engine by a couple years. I would imagine this one has a 360 under its doghouse. 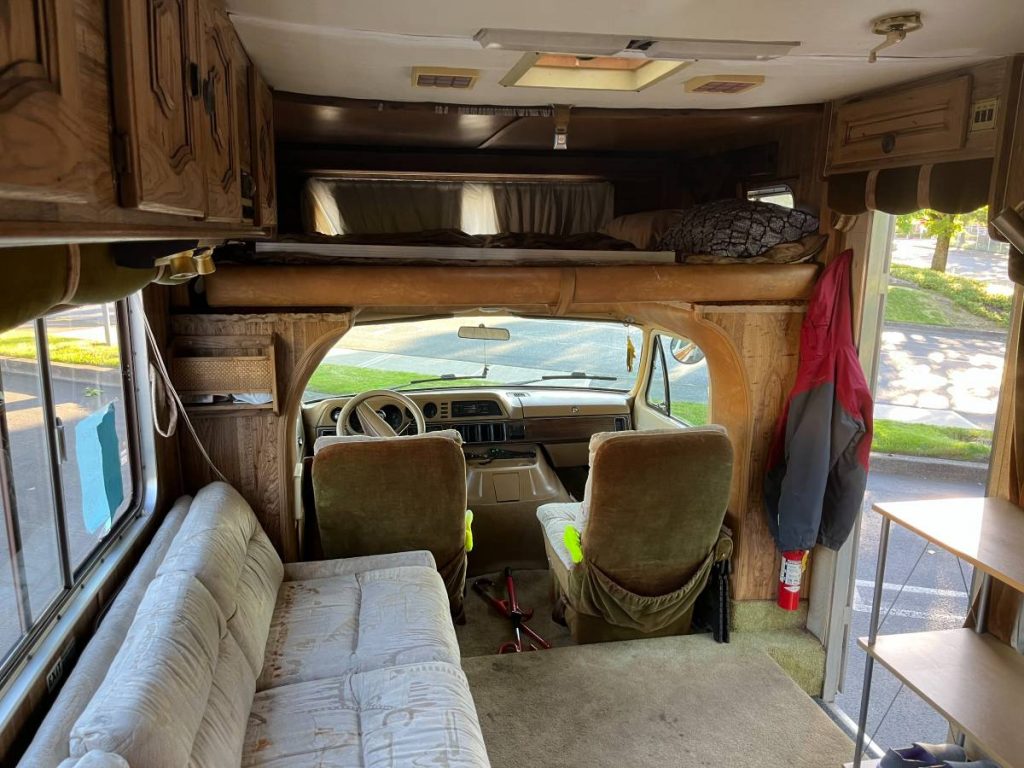 The seller says it runs and drives well, and is mechanically ready to roll. But that’s not the tough part when it comes to RVs. Since they’re basically half-van, half-tiny house, and the tiny house part has to be light enough to sit on the van part, RVs aren’t made of the sturdiest stuff. Older ones like this are usually a wood frame with an aluminum skin, and leaks can and do form at the seams where panels meet. The seller says this one is watertight, but take it from me, it has leaked at some point in the past. 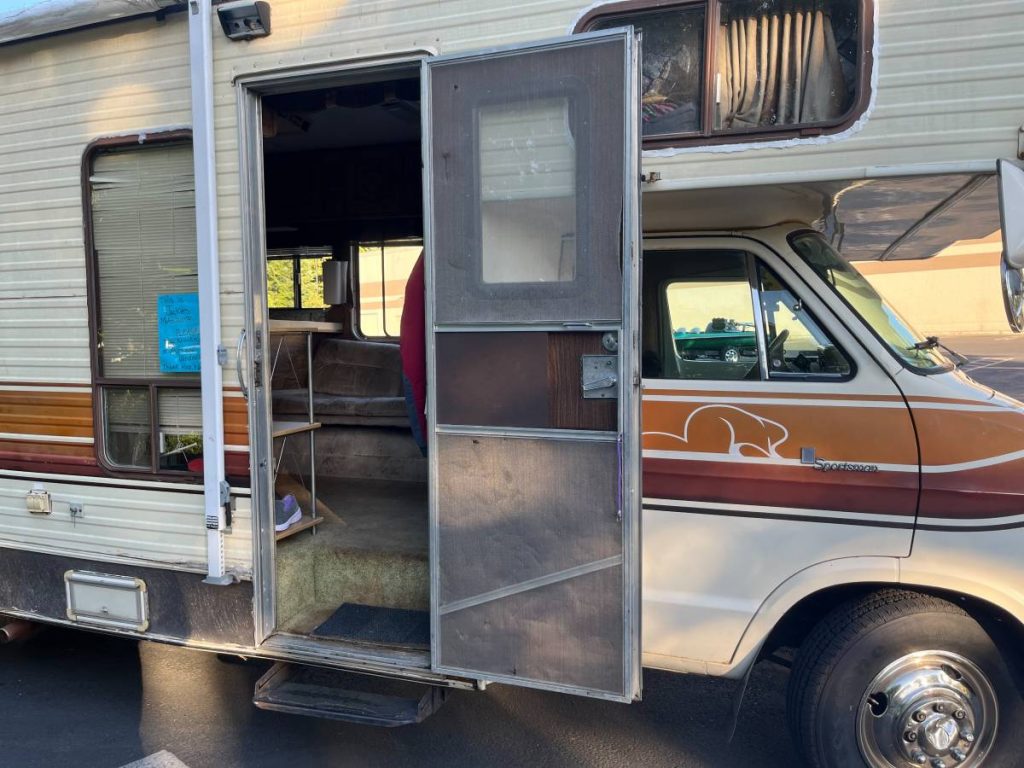 It’s nicely equipped, with a rooftop air conditioner and a retractable awning. The interior looks dated, to put it mildly, but in decent shape. Outside it’s a little banged up, and the overzealous application of RTV sealant on the windows isn’t the prettiest, but if it keeps the water out, then it’s doing its job. 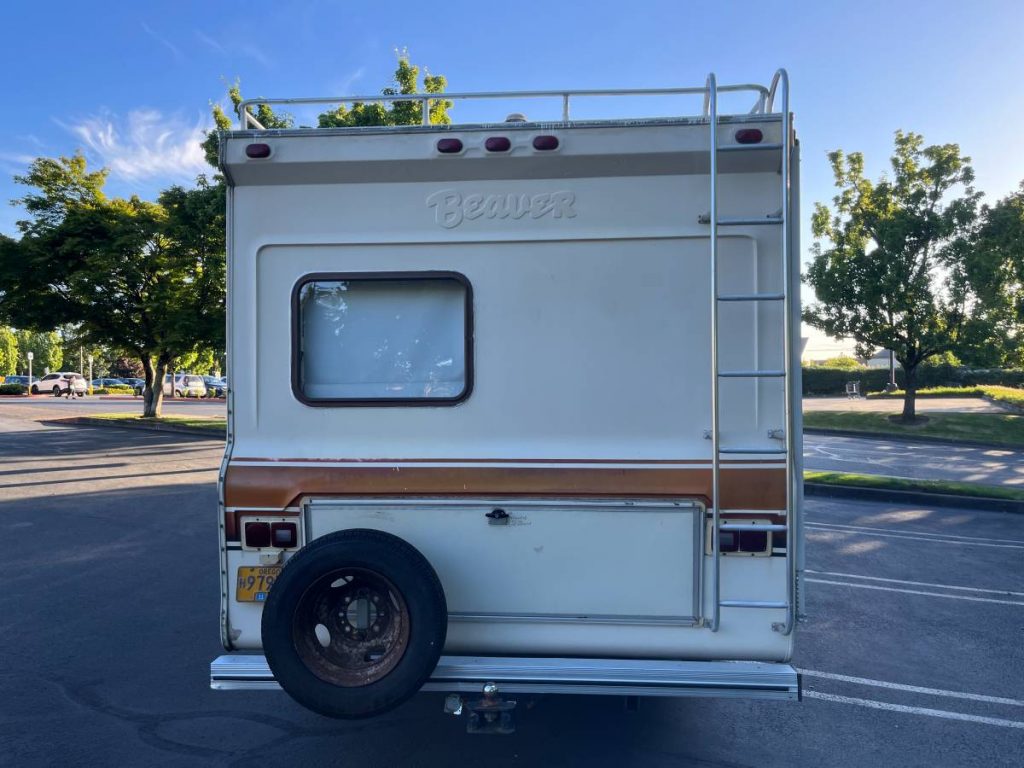 Overall, it’s kind of a cool retro rig, and cheap enough that you could spend some money making it a little more presentable, and roll up to the campgrounds in style. 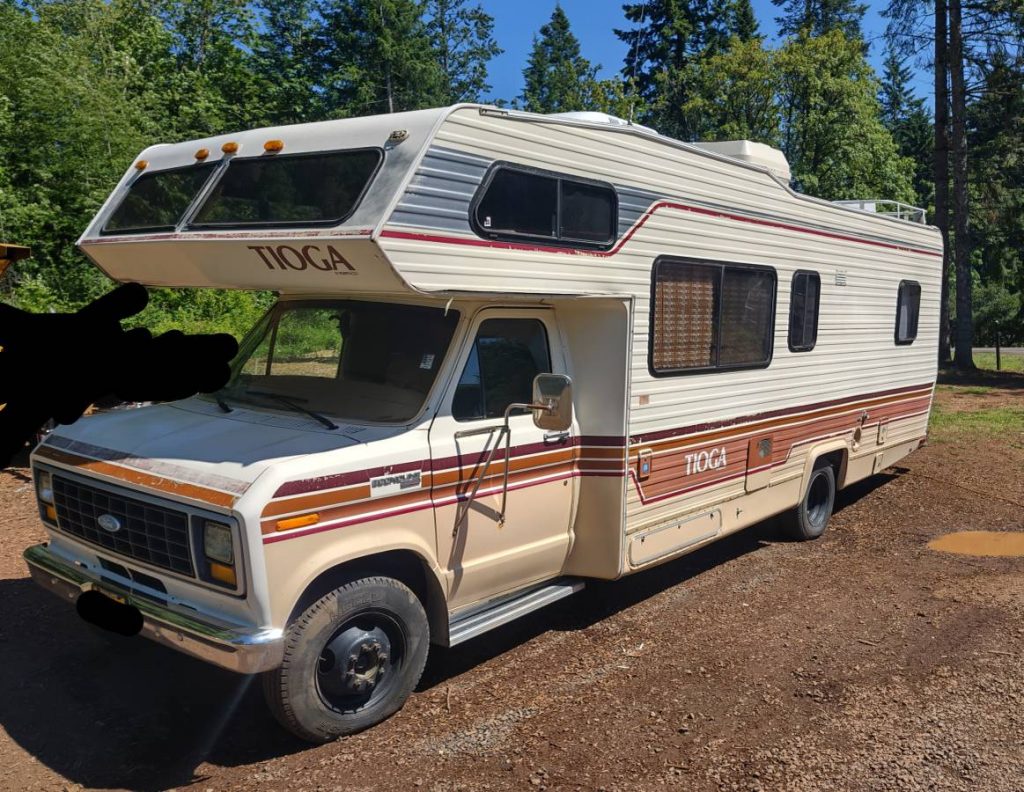 Runs/drives? Yep, but that’s all the ad says

Two feet longer, three years newer, and available for $400 less is this Ford Econoline-based Tioga. This rig is just a tiny bit more modern in design, ever so slightly more aerodynamic, but also a little scruffier. The window seals need replacing; at least the seller is up front about it. The question, of course, is how long have they been leaking? 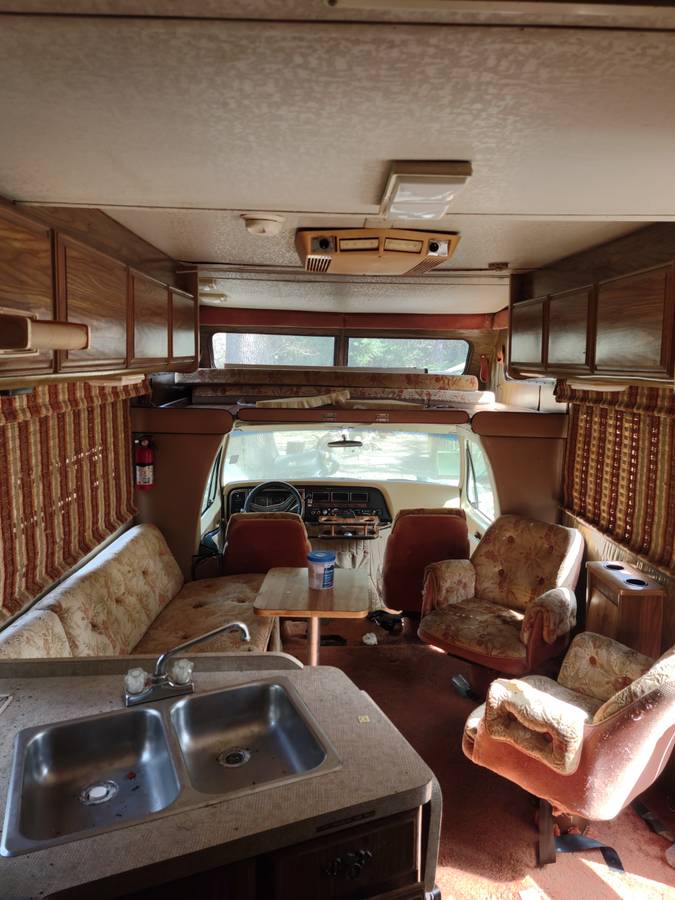 Inside, this one is also stuck firmly in the early Reagan years, but those captain’s chairs do look inviting. And to some extent, a kitschy out-of-style interior is part of the charm of these old motorhomes, as it is for really good diners. (If a diner has been remodeled since The Rockford Files went off the air, their patty melt just isn’t as good. I don’t know why that is true, but it is.) 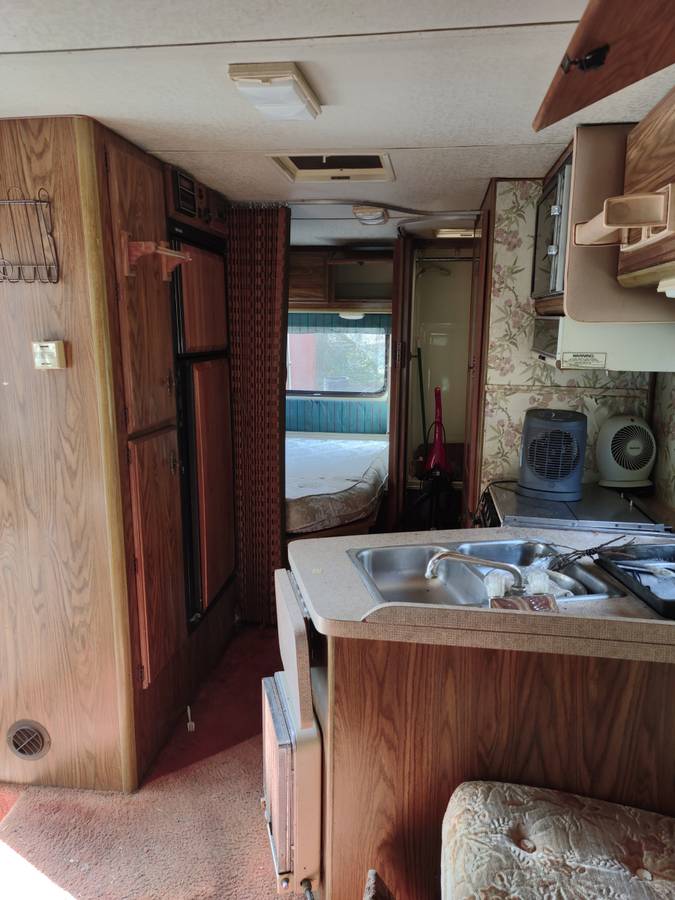 There is a little evidence of water staining here and there, so it would be worth poking around to make sure it’s just stains and not actual damage. It’s not the end of the world, as long as it’s not too bad, but it is one more thing to fix. And with an old RV, the list of things to fix never gets any shorter; you’re just trying to keep it from getting longer. 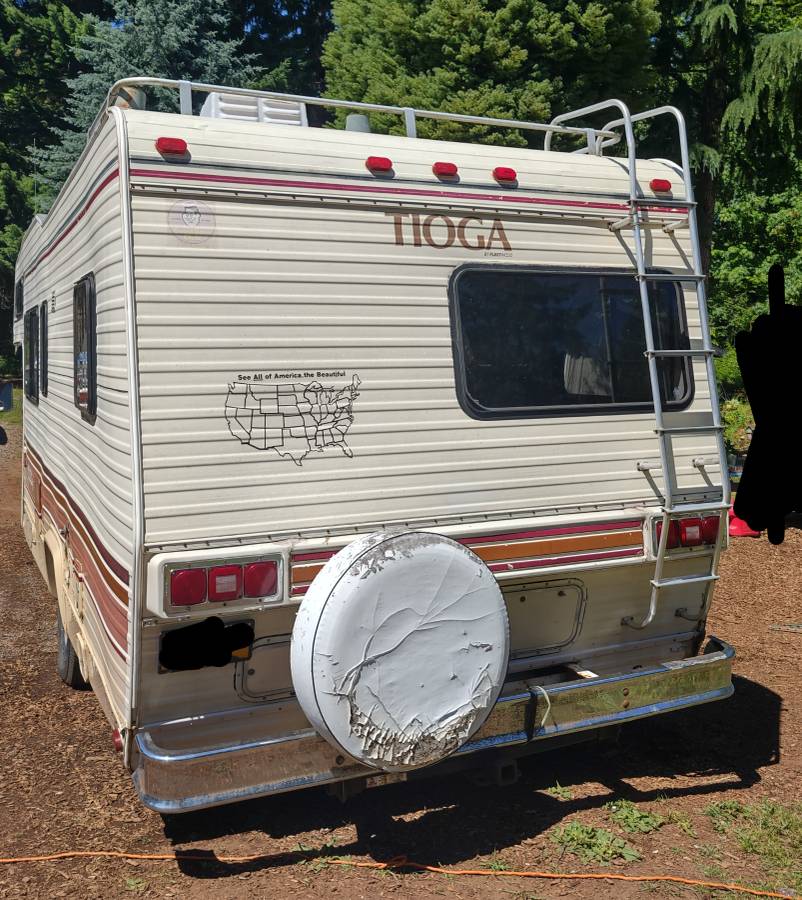 The seller has precious little to say about its mechanical condition besides “runs and drives,” so you’re left on your own to investigate that further. I think most Econoline-based RVs this size had a 460 in them, maybe a 351, but I doubt it. Either way, it should be plenty stout, as long as it starts out in decent shape.

Old RVs like this aren’t for everyone; if you aren’t handy with a wide variety of tools and willing to do the work yourself, best keep walking, and just reserve a cabin at a KOA for your nature getaways. But if you like to tinker and improve, it can be a rewarding project. Which one is the better starting point? I leave that up to you.

Pacific Northwest-based self-taught DIYer of all the things. Current fleet: 1971 MGB GT, 1989 Chevy K1500, 2013 Chrysler 300C, 2003 Infiniti QX4, and 1966 Aristocrat Land Commander trailer. Not to mention about 40 RC cars and around 100 model kits...
Read All My Posts »
PrevPreviousCold Start: Donkey Kong, Behind The Scenes
NextWith A Heavy Heart, I Regret To Inform You That The Fantastic Hyundai Veloster N Is DeadNext