Buying a car from the great driver’s car era of the mid-to-late 2000s has some pros and cons. On the plus side, they are fairly reliable and often make great daily drivers. On the minus side, you don’t get all the modern conveniences of brand new cars. Built-in navigation systems are hopelessly outdated, cooled seats often aren’t on the menu, and Bluetooth usually only works for phone calls. That last point is especially important as most phones these days don’t have dedicated headphone jacks. However, before you go ripping your dashboard apart to install some module, a cheap Bluetooth receiver like this one can get audio streaming to your car’s stereo so long as you have a 3.5 mm auxiliary port.

Will a Bluetooth connection ever offer the fidelity of a wired connection? Absolutely not. However, let’s say that you have a modern phone that doesn’t have a dedicated 3.5 mm auxiliary port. If you need to charge and use a dashboard mount for navigation, Bluetooth is likely your best option. Despite this, there is a small problem when it comes to fitting most Bluetooth receivers to cars like my BMW 325i. 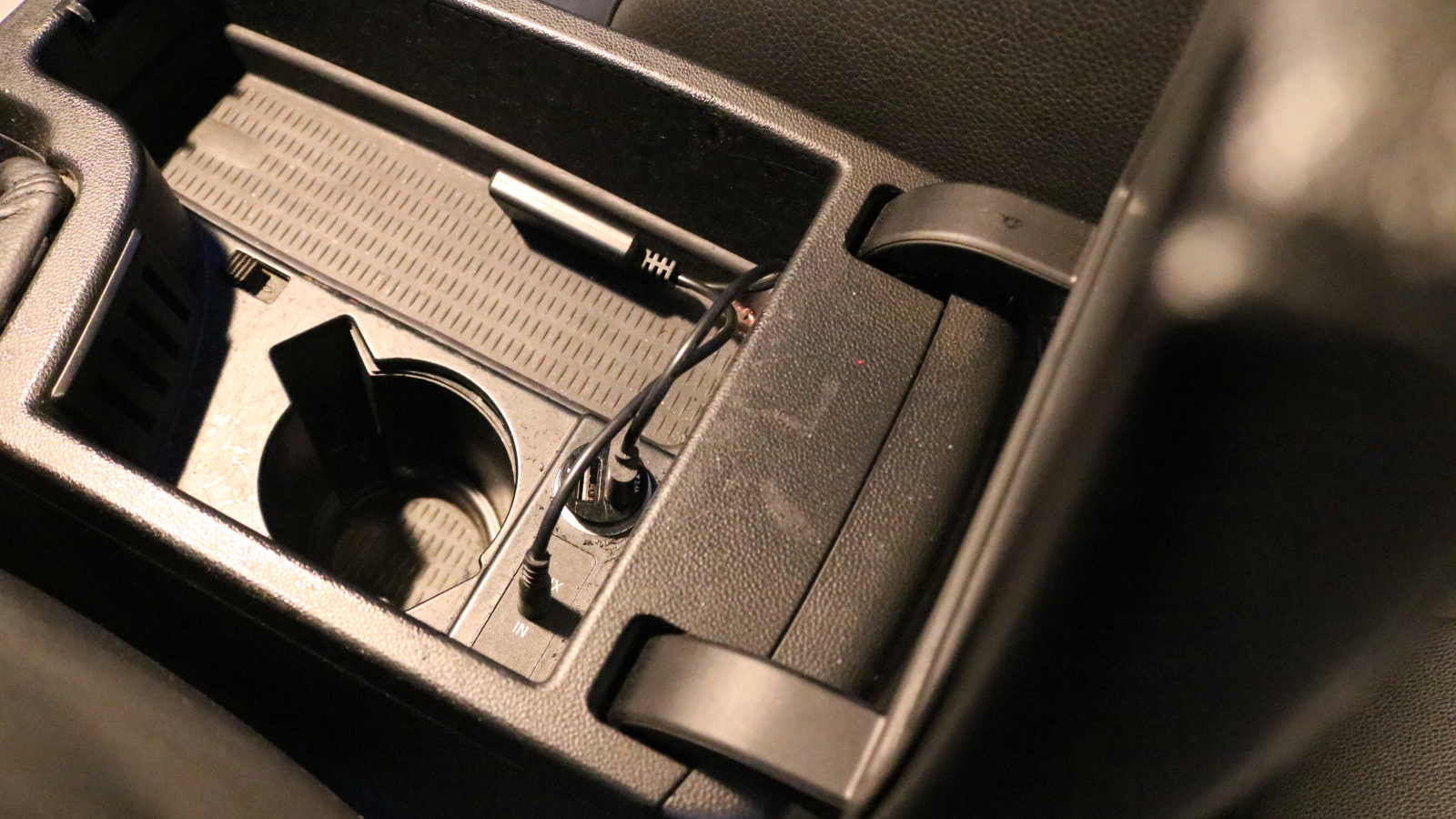 Thankfully, it’s not some insane proprietary electronic issue on the car side. Rather, it’s a matter of space. There just isn’t a ton of room between the in-console 12-volt socket and the lid of the center console, so most receivers don’t fit. I found this out the hard way when my last Bluetooth receiver found itself constantly pinched by the console lid, eventually culminating in a spectacular explosion of cheap Amazon-sourced plastic.

However, this little Bluetooth receiver fits the bill perfectly. Instead of being a massive integrated USB dongle, it’s a plastic box with a USB cable and a 3.5 mm cable coming out of it, perfect for cars with tight clearance. Best of all, the plastic receiver casing is quite small, so it doesn’t take up much room at all in the console. Just plug. the 3.5 mm audio cable into your car’s auxiliary port, plug the USB cable into any USB power source/cigarette lighter adapter, connect your phone, and you’re set. [Editor’s Note: If you own old cars like I do, you can just plug the audio cable into a cassette adapter. -DT] 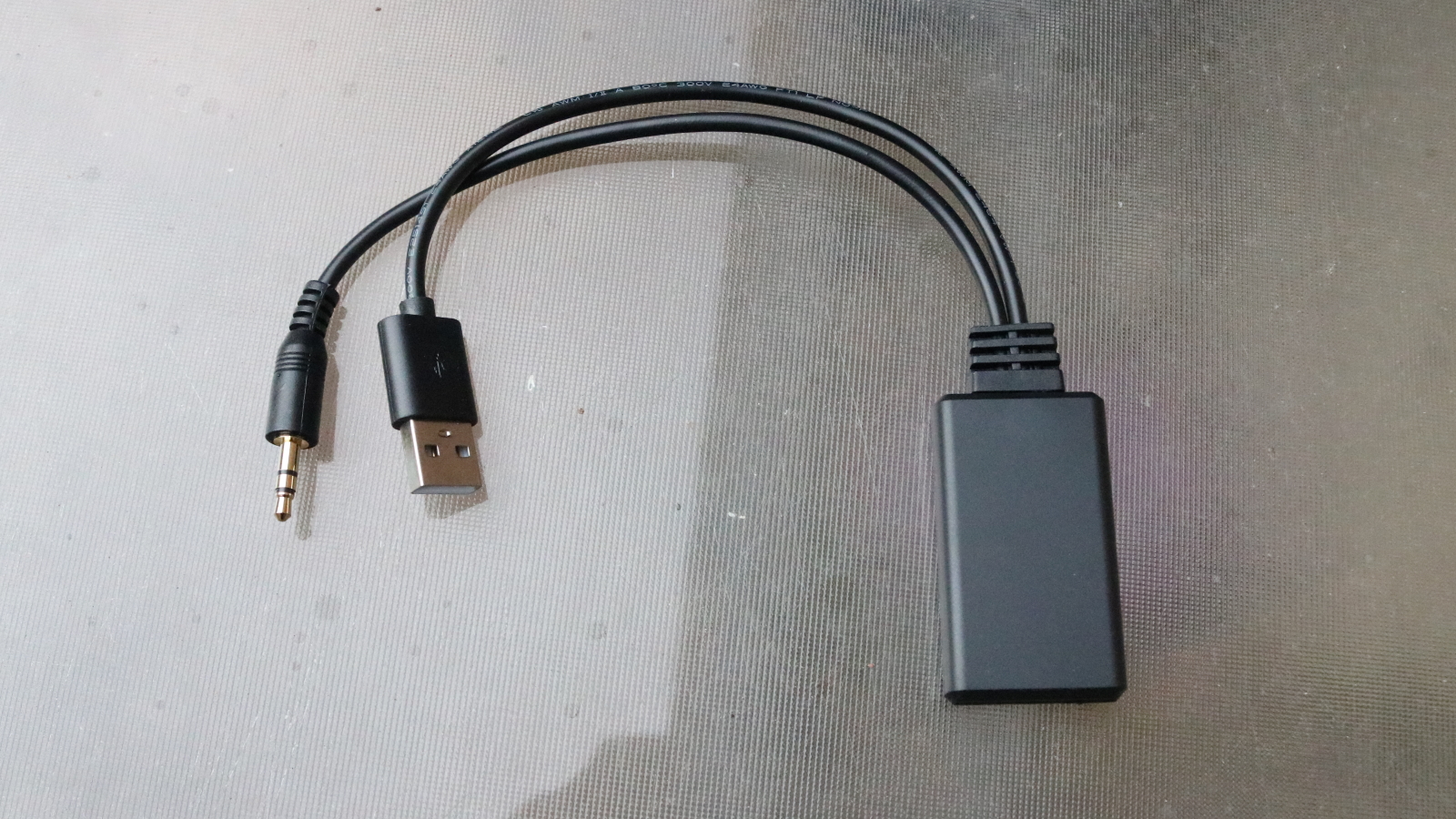 Are there annoyances? Sure. It’s not great for phone calls and the startup can be a bit uncouth, but that’s about it. Connection is seamless and sound quality on this Bluetooth receiver really isn’t bad due to its construction. By hardwiring the 3.5 mm cable to the receiver instead of having a 3.5 mm jack on a receiver dongle to accept a patch cable, the makers of this receiver have essentially eliminated one point of possible connection issues. However, it’s worth noting that a receiver will never sound as good as just running a cable. Most popular Bluetooth codecs like AptX and AAC carry a degree of harmonic distortion, but this little receiver is up to scratch with the receivers in most OEM audio systems.

Perhaps best of all, there’s no pairing button on this receiver to be bumped by items in the armrest. At a cost of $18.49, it’s a hell of a lot cheaper than retrofitting a MagSafe or other wireless charger, and is a great way of getting Bluetooth audio into your older car. While I still prefer plugging in a 3.5 mm auxiliary cable, it’s nice to be able to charge my phone on long trips without worrying about cable management or the weight of a phone holder with wireless charging.

Thomas is a Nu Rave-blaring, heel-toe downshifting, maple syrup-swilling, chassis-geeking, junkyard parts-hauling, floppy-haired scenester who's been writing about cars since college. His current ride is a 2006 BMW 325i with the six-speed manual gearbox. Instagram: @thomas.hundal Twitter: @thomashundal
Read All My Posts »
PrevPreviousThis Motorcycle That You Can Still Buy Today Is Powered By A Car-Bumper-Melting Helicopter Engine. Let’s Take A Look
NextI Got To Check Out This Beautiful Douglas DC-3 That’s Back In The Air After Being Grounded By A Storm 13 Years AgoNext