This Motorcycle That You Can Still Buy Today Is Powered By A Car-Bumper-Melting Helicopter Engine. Let’s Take A Look

Lately, I’ve been looking at things powered by turbines that would normally be powered by something else. While researching yet another turbine-electric train, it hit me that at some point you could buy a motorcycle powered by a helicopter’s turboshaft. The MTT Turbine Motorcycle is a 250 mph, car bumper-melting monster with a 420-horsepower Rolls Royce-Allison 250-C20 turboshaft from a helicopter. And the best part? You can still buy them brand new today.

As you all probably know by now, I love writing about ridiculous transportation projects. Learning and writing about colossal planes, crazy powerful trains, custom motorcycles, and novel RV concepts brings me a lot of joy. I even love weird boats. The MTT Turbine Motorcycle combines aviation and motorcycles into something that resulted in Australian Motorcycle News writing “It’s bloody mad and extremely scary. I’ll tell you what it feels like: it feels like bungee-jumping, except with the bungee pulling you forwards and not upwards. The sheer sense of uncontrollable acceleration building and the wind noise rushing up to meet you.” And I’m somewhat surprised that I haven’t written about this thing before.

Turbine All The Things 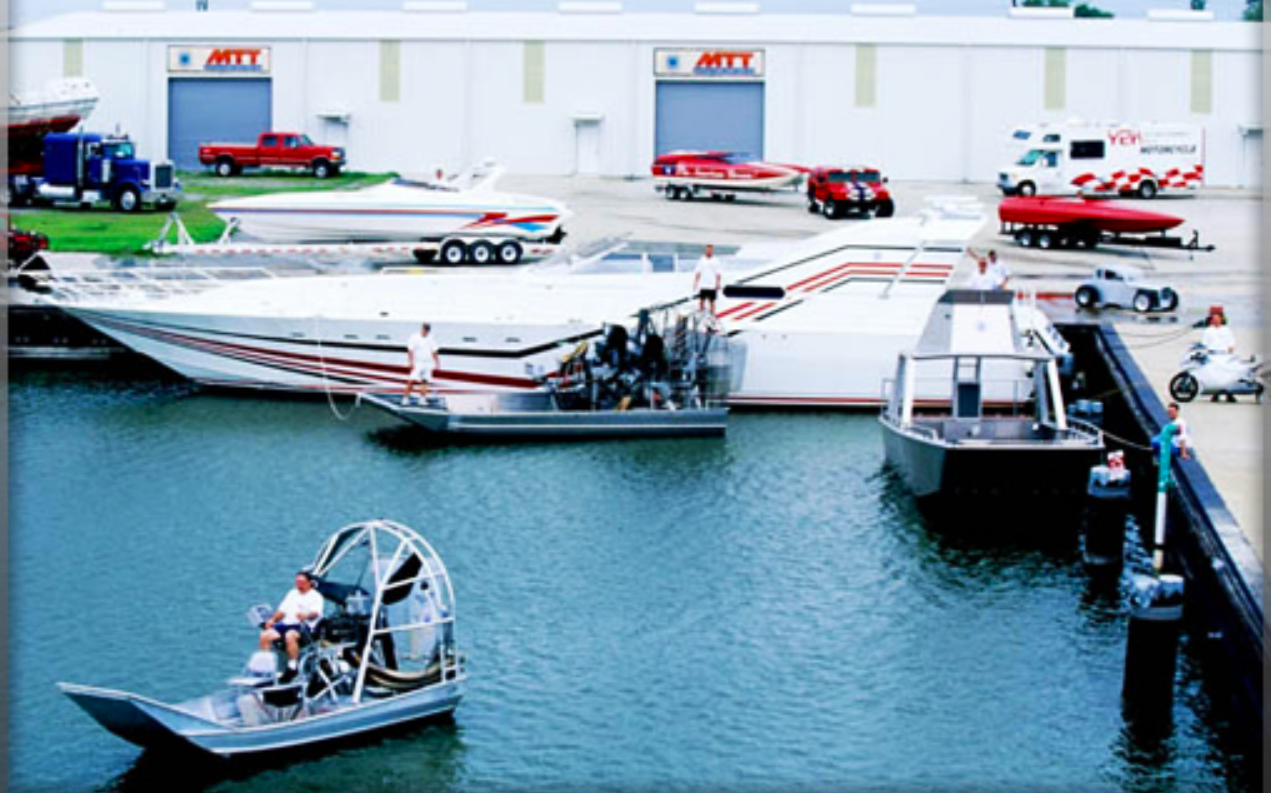 The Louisiana-based company has a portfolio of turbines for marine use from a turbine outboard engine to a turbine-powered speedboat. But MTT’s work with turbines hasn’t stayed on water, and the company has created some wild land-based vehicles.

Inspired by the Chrysler Turbine Car, in 1998, the company combined a Chevrolet S-10 with a Rolls Royce-Allison 250-C20B turboshaft. 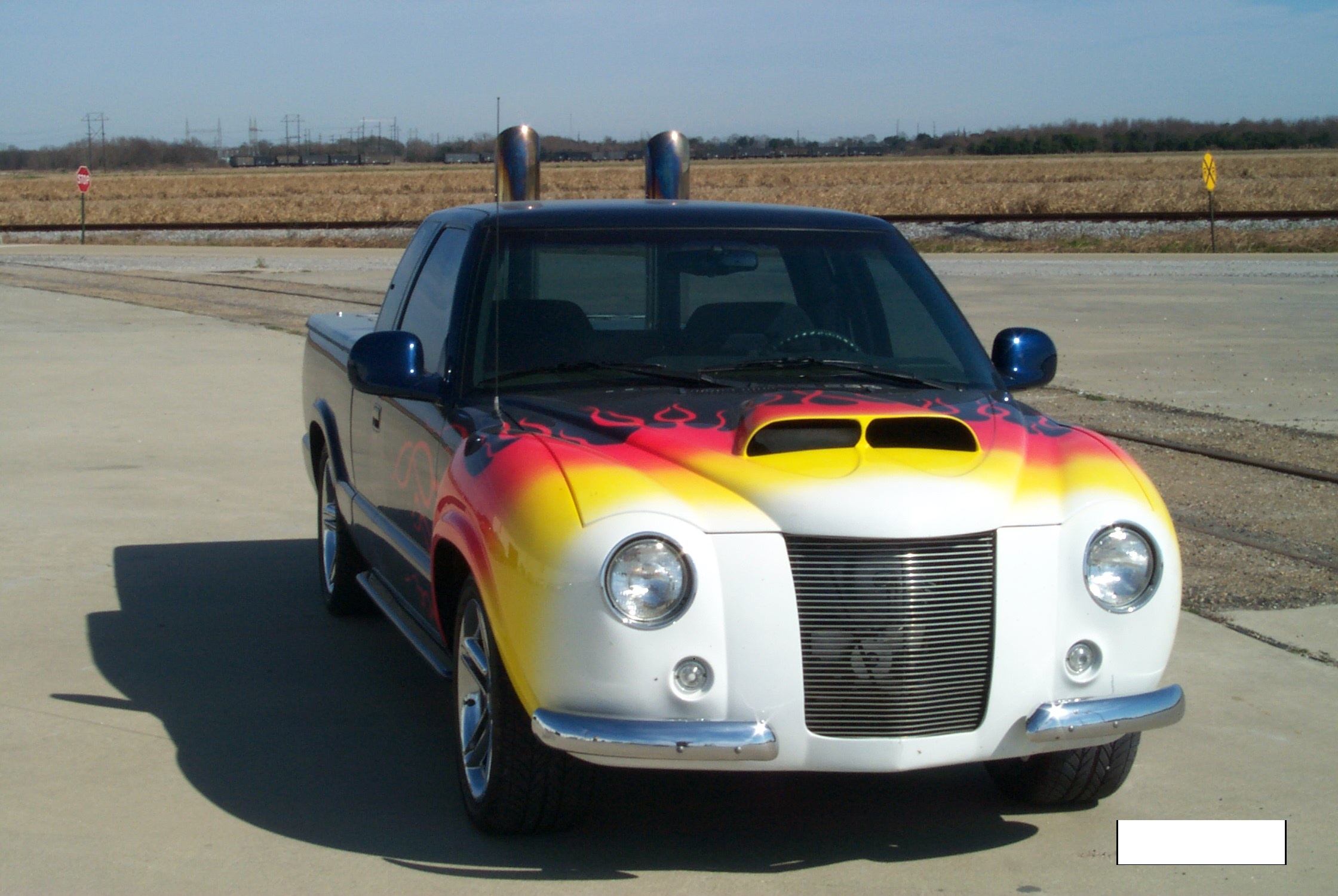 In the Turbine RetroROCKET, propulsion comes from the 420 HP turboshaft driving the truck through an automatic transmission. Perhaps more amazing than powering a truck with a turbine is the fact that the truck still had working air-conditioning, power steering, and cruise control. MTT says that the truck can go 900 miles between fill ups and back in 2016, the truck even had a few thousand miles on its odometer.

The company would later create a turbine-powered Mini. Yet, neither of those cars are the wildest MTT creation. That designation goes to the Y2K Turbine Superbike. 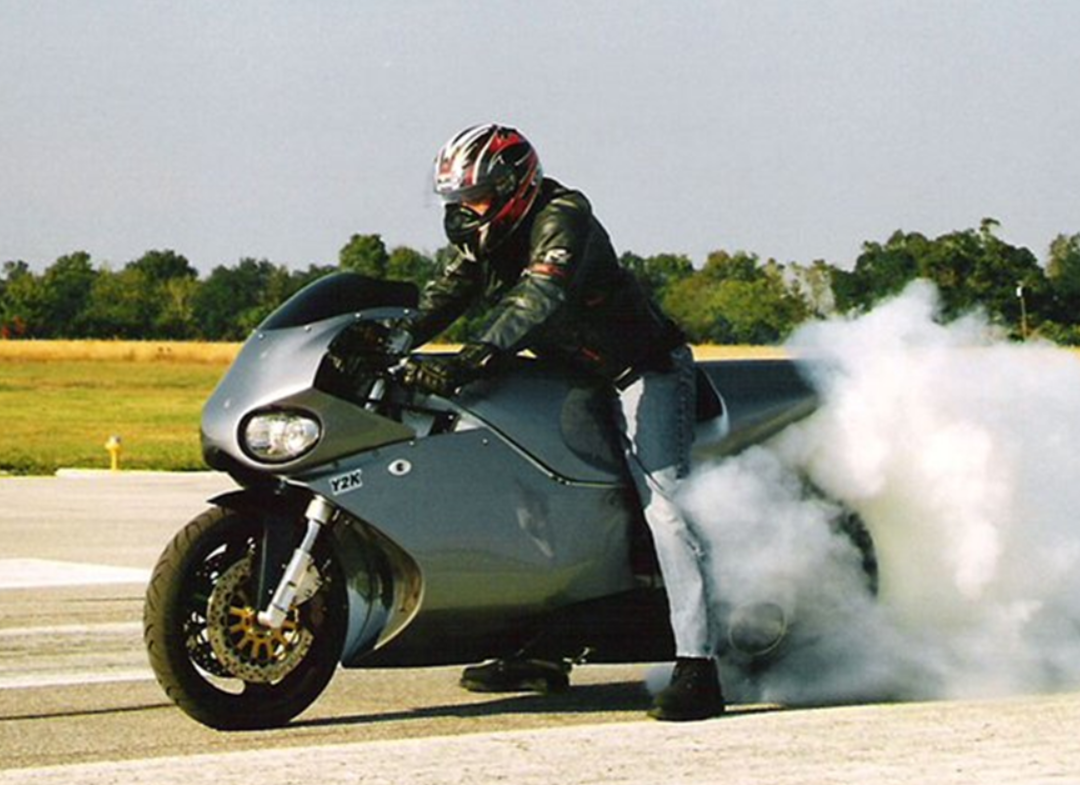 As the name suggests, this motorcycle was launched in 2000, and back then, it had technology that would be fresh on a motorcycle here in 2022. This is a bike that broke records. Its Rolls-Royce-Allison 250-C18 was good for 320 horsepower at 52,0000 RPM. And unlike some turbine builds that use thrust, this turboshaft delivered power through a three-speed Toyota Corolla automatic converted into a two-speed with a chain drive. That power, combined with its $175,000 price, earned it the Guinness record for most expensive and most powerful motorcycle.

It didn’t just break records as it broke journalists, too.

Australian Motorcycle News visited Superbike owner in Arizona for a test ride, and I’m not sure I’ve seen someone more excited in a motorcycle review. Here’s an excerpt:

MTT archived the whole review and I highly recommend reading it. Contained in that review is the starting procedure, itself something notable. It starts with turning the ignition on and letting the computers boot. And as the motorcycle’s color display shows you gas and oil temperatures, the rear-facing camera turns on and displays what’s going on behind you on a center display. Then you hit and hold the start button. As the turbine spools up to 15 percent speed, fuel starts getting injected. You have to keep holding it until the turbine reaches 50 percent N1, and only then can you let go of the start button. By now, the turbine is making a deafening roar, drowning out any chance at a conversation with people nearby. And the exhaust temperatures are 1,000 degrees and higher. 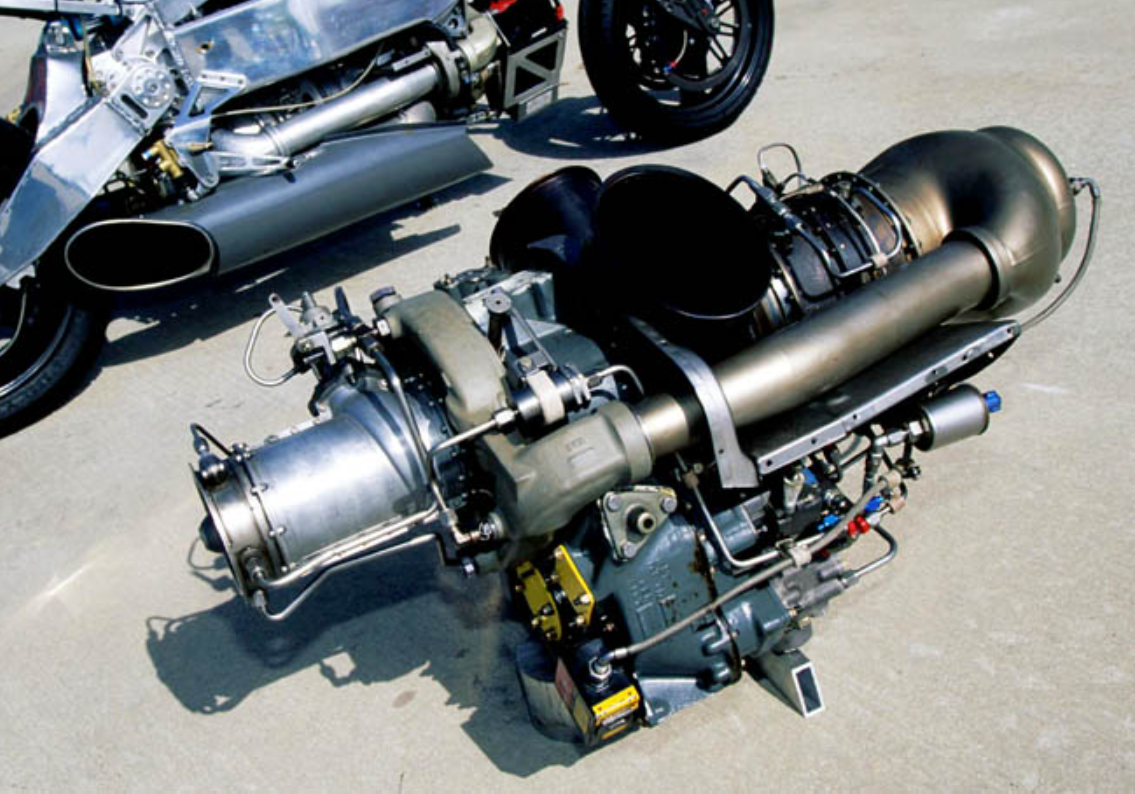 “Imagine a Harley idling at 2500 rpm-all the time,” Leno yells over the deafening roar. “That’s what it’s like.”

Despite McIntyre’s claims of 320-plus horsepower and 425 foot-pounds of torque, the Y2K is remarkably docile at slower speeds. “At idle, it’s making 10 horsepower,” Leno explains. “Once you’re rolling, though, it’s like the hand of God pushing you in the back. It’s frightening. You have an engine that’s meant to lift a 10,000-pound helicopter pushing a 460-pound bike, so your power-to-weight ratio is goofy.”

Leno goes on to describe how operating the turbine is way different than a piston engine. For one thing, when you let off the throttle, it doesn’t start slowing down. And there is no engine braking. If you want to stop, you have to put it in neutral then let the Brembo brakes bring you to a stop. As for that exhaust? Leno claims that it’s hot enough that if you’re not careful, you’ll melt the bumper of the car behind you at a red light. 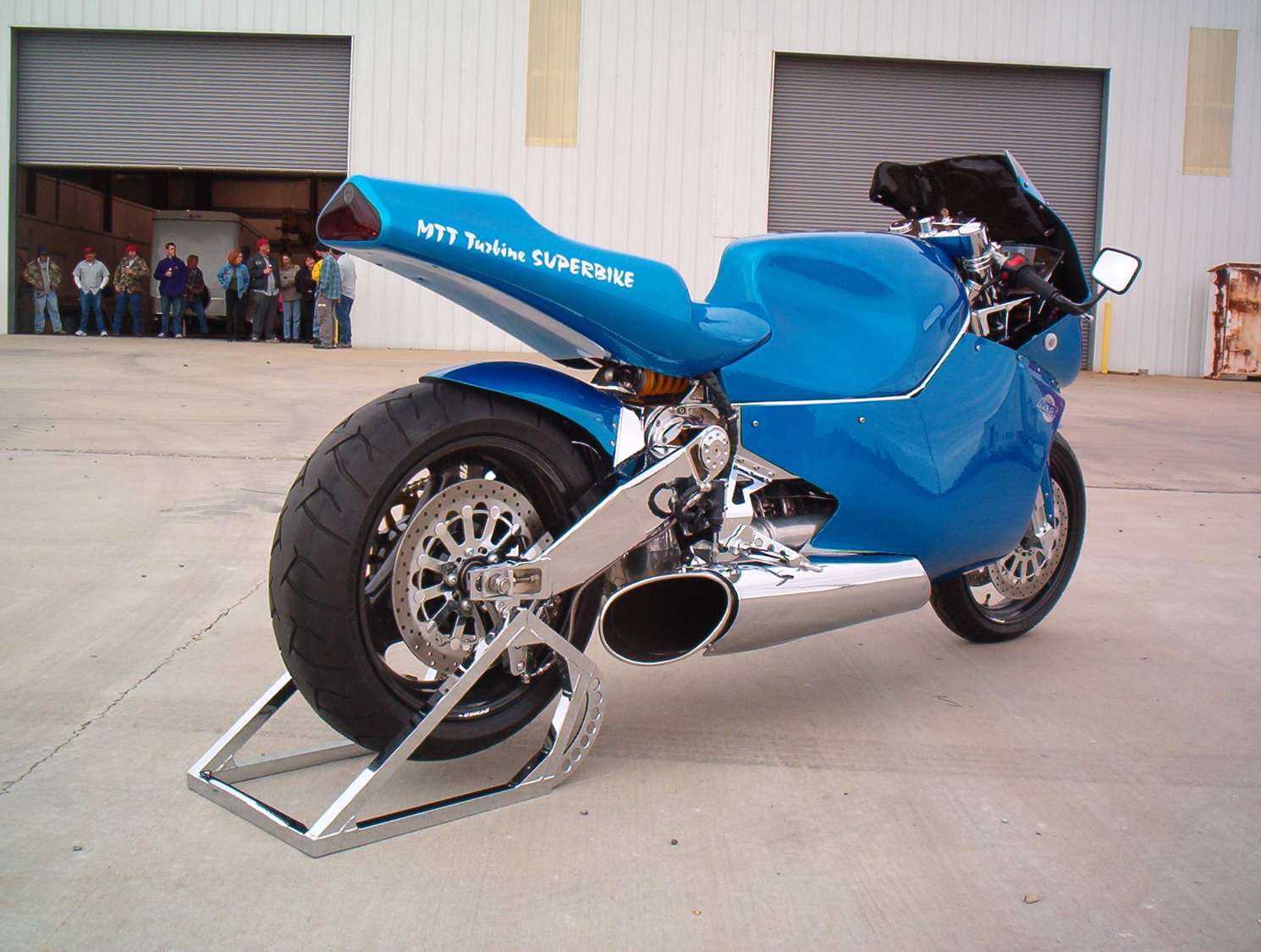 And that’s not all. It has an 8.5-gallon fuel tank, which would normally be huge for a motorcycle. However, the turbine is a drinker, and will empty the tank in 60 miles on the highway or just 20 in the city. Thankfully, when you run out of fuel, you don’t have to find an airport to fill up.

Ted McIntyre II, founder and CEO of MTT, says that his turbine motorcycles will run on anything that burns. The turbine will run on diesel, gasoline, Jet-A, or even tequila. Talking with CNBC, McIntyre says that the motorcycles are set up to run on diesel, so keeping the fun going shouldn’t be too hard. Plus, you’ll almost certainly get looks from people as you fill up on diesel, as if the sound of a helicopter on the ground wasn’t enough. Listen to this:

Perhaps the coolest part about these reviews is that they mention that the motorcycle is pretty easy to ride at slow speeds. The Australian Motorcycle News review notes that at low speeds, the motorcycle is so slow that you’d get smoked by someone on a Vespa. And cranking the throttle at low speed doesn’t do much. It also handles like the 500-pound monster that it is.

And top speed? MTT says that the fastest recorded speed on a Y2K Superbike is 227 mph, but the company believes that it could go 250 mph or even faster. Apparently, the motorcycle needs something longer than a runway to really stretch its legs.

The Superbike Gets Even More Power 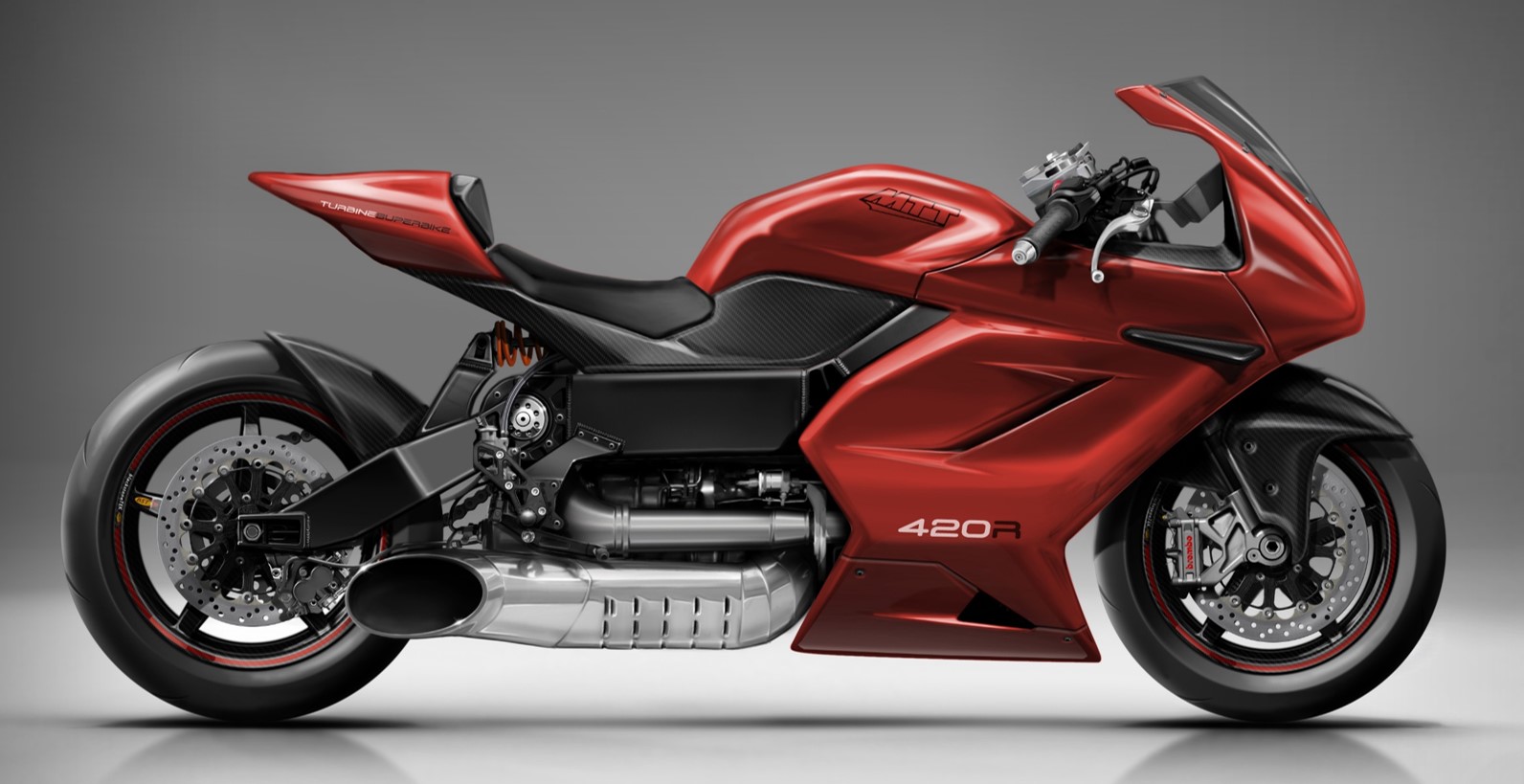 Chances are, you’ve probably known about this motorcycle for a while. But what I didn’t know is that these motorcycles are still being made today.

Nowadays, they’re called the MTT Turbine Superbike. And it’s more than just a name change, as the updated Superbike has new bodywork and a Rolls Royce-Allison 250-C20 turboshaft making 420 HP at 52,000 RPM. Like the first-generation Y2K Superbike, you get a tubular aluminum frame, a color display, rear-facing camera, and an ignition system that won’t let you destroy the turbine. The 420-RR “Race Ready” is the current version, and it’s the same 420 HP powerplant, but in a sleeker package. 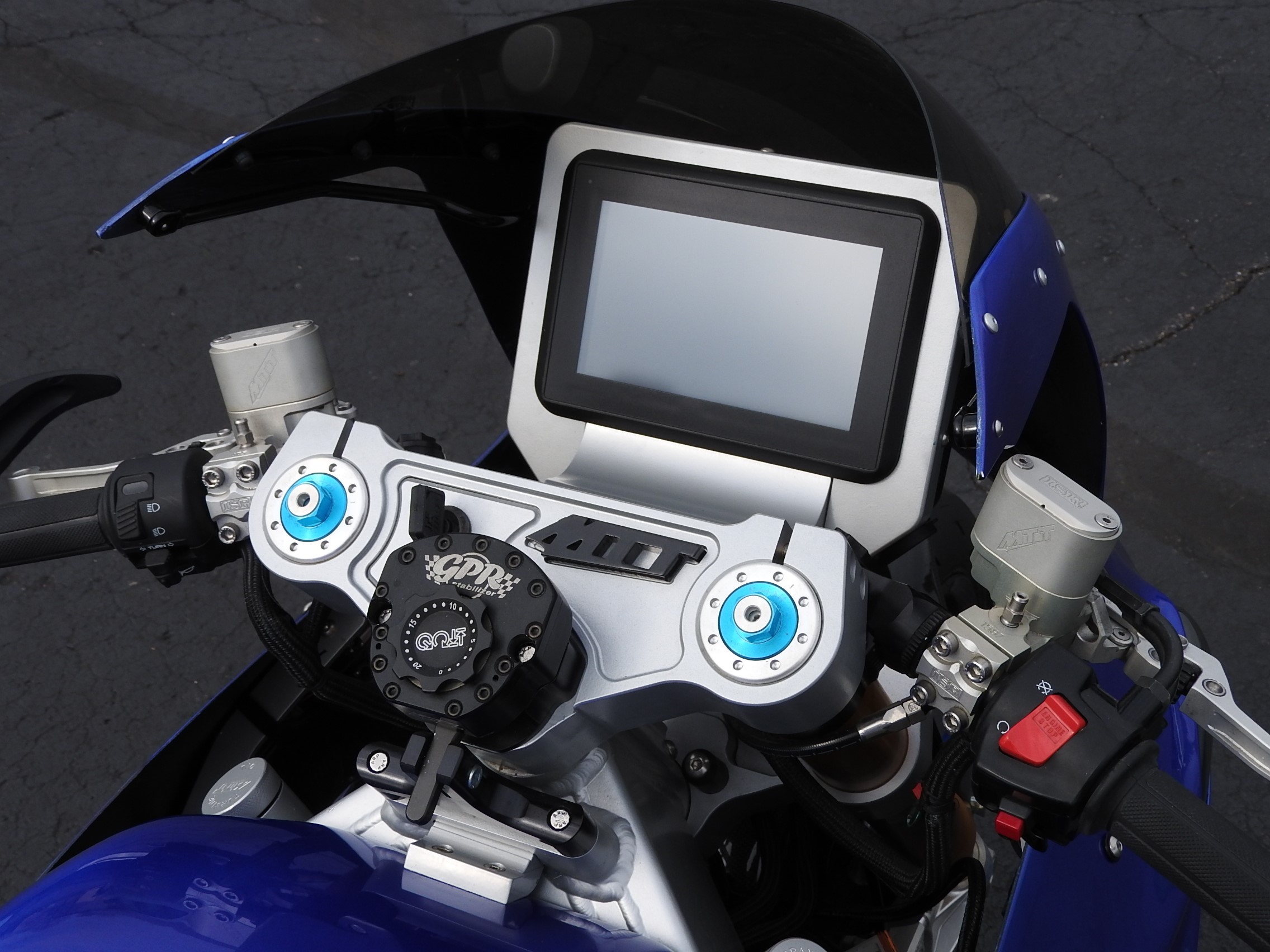 McIntyre said in 2017 that it takes about three months to build one of these aluminum-framed motorcycles, and the turbine costs $125,000 all by itself. The CEO goes on to note that there’s another $25,000 in computers just to keep the thing cool.

The company isn’t buying new turbines, but getting them used after they’ve spent time in helicopters like a Bell 206 Jet Ranger. The turbines then get overhauled and slapped with a lifetime warranty from MTT. Today, the company will build you one for the price of $270,000, or $300,000 if you want it as a trike. The company is big on customization, too, just check out this paint: 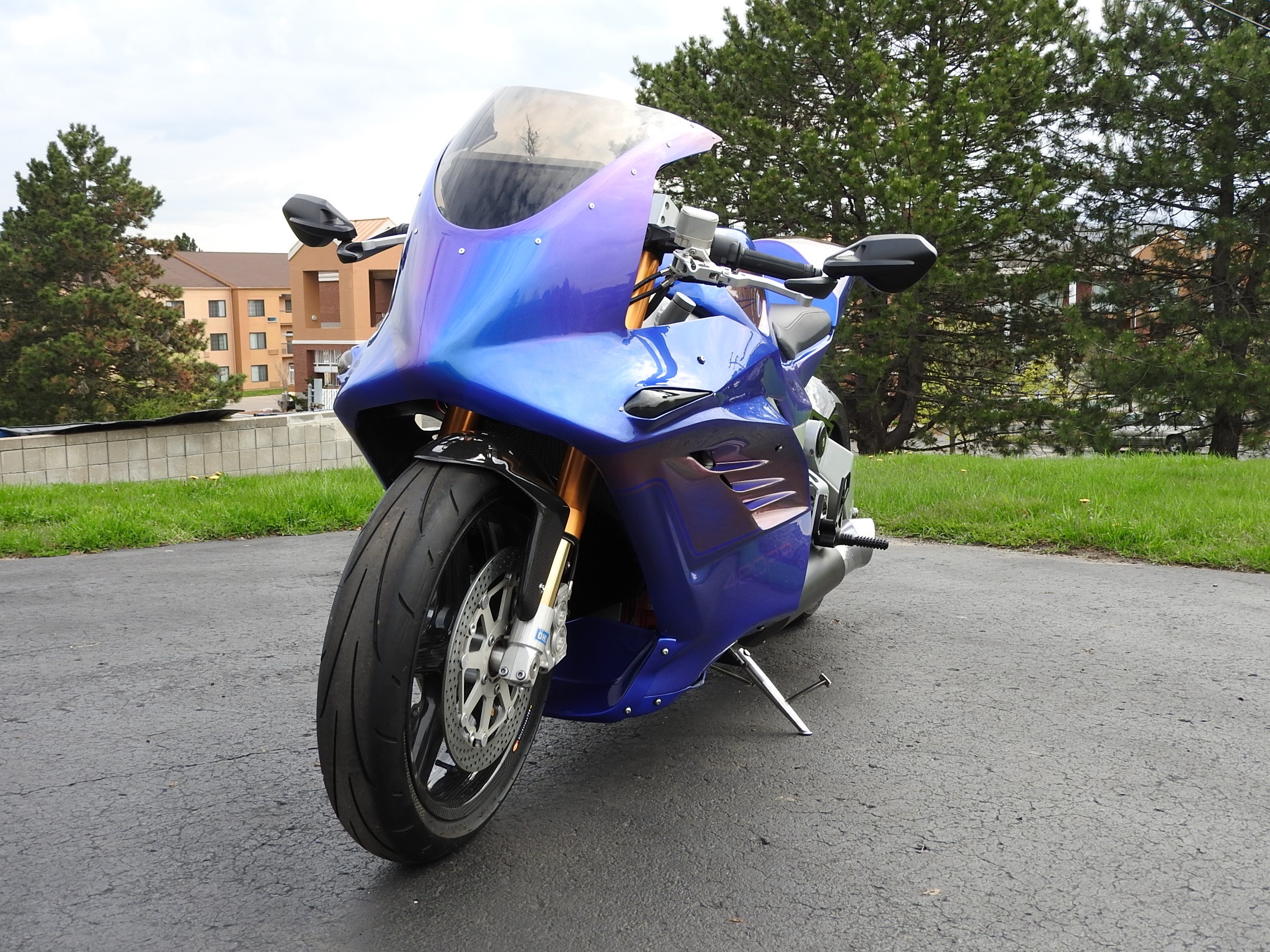 I tried to find some on the used market and unsurprisingly came up empty. MTT builds just a handful of them a year, and some of them go out to clients in other countries. But if you have the cash, and the bravery, Marine Turbine Technologies will gladly take your money and give you a roadgoing helicopter. As with many of the vehicles that I write about, I’d love to have even just ten minutes with one of these. 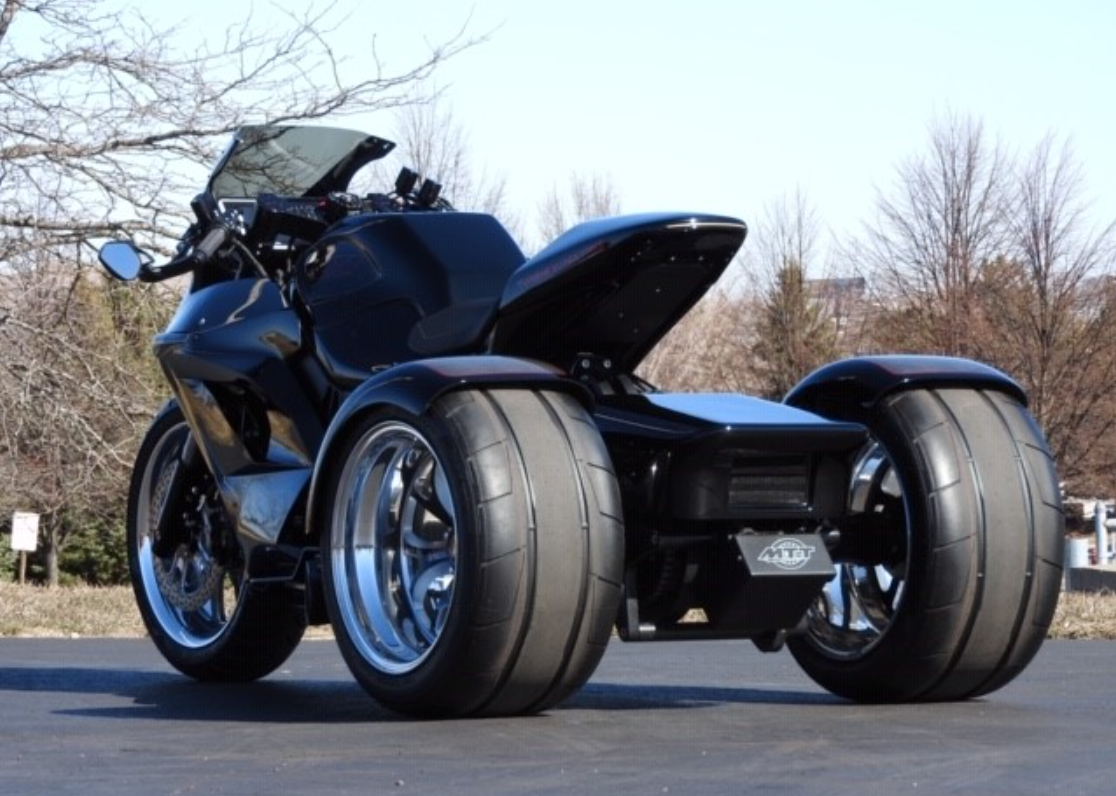 Mercedes is a lifelong fan of all things powered by an engine. When she isn't driving one of her five Smart Fortwos or her 14 other vehicles she could be found in the cockpit of a Cessna 172 or perhaps swimming in any body of water that she could find. She also has a deep love for buses of all kinds. Please send her buses. mercedes@theautopian.com Instagram: @mistymotors Twitter: @Miss_Mercedes30 Facebook.com/neonspinnazz
Read All My Posts »
PrevPreviousThe 2024 Chevrolet Trax Looks Like A Deal For $21,495
NextHow I Modernized My Old Car’s Audio System With This $18 Bluetooth ReceiverNext