Back in the summer, I joined over 650,000 people in a humongous air show in Oshkosh, Wisconsin. At the massive celebration of all things aviation, I saw so many fun planes that I promised you that I would write about. One of them is this majestic beauty, a 1942 Douglas C–47A-5 DK Skytrain converted to a DC-3C. This plane was grounded a decade ago after it was damaged in a storm. After years of work from hardcore aviation fans, this piece of history is flying once again.

The Douglas DC-3 is one of the aircraft credited with making flying popular with people and profitable with airlines. It’s a plane so recognized throughout history that you’ll even find it in video games only tangentially related to aviation. As I’ve found, even non-avgeeks can sometimes identify one. 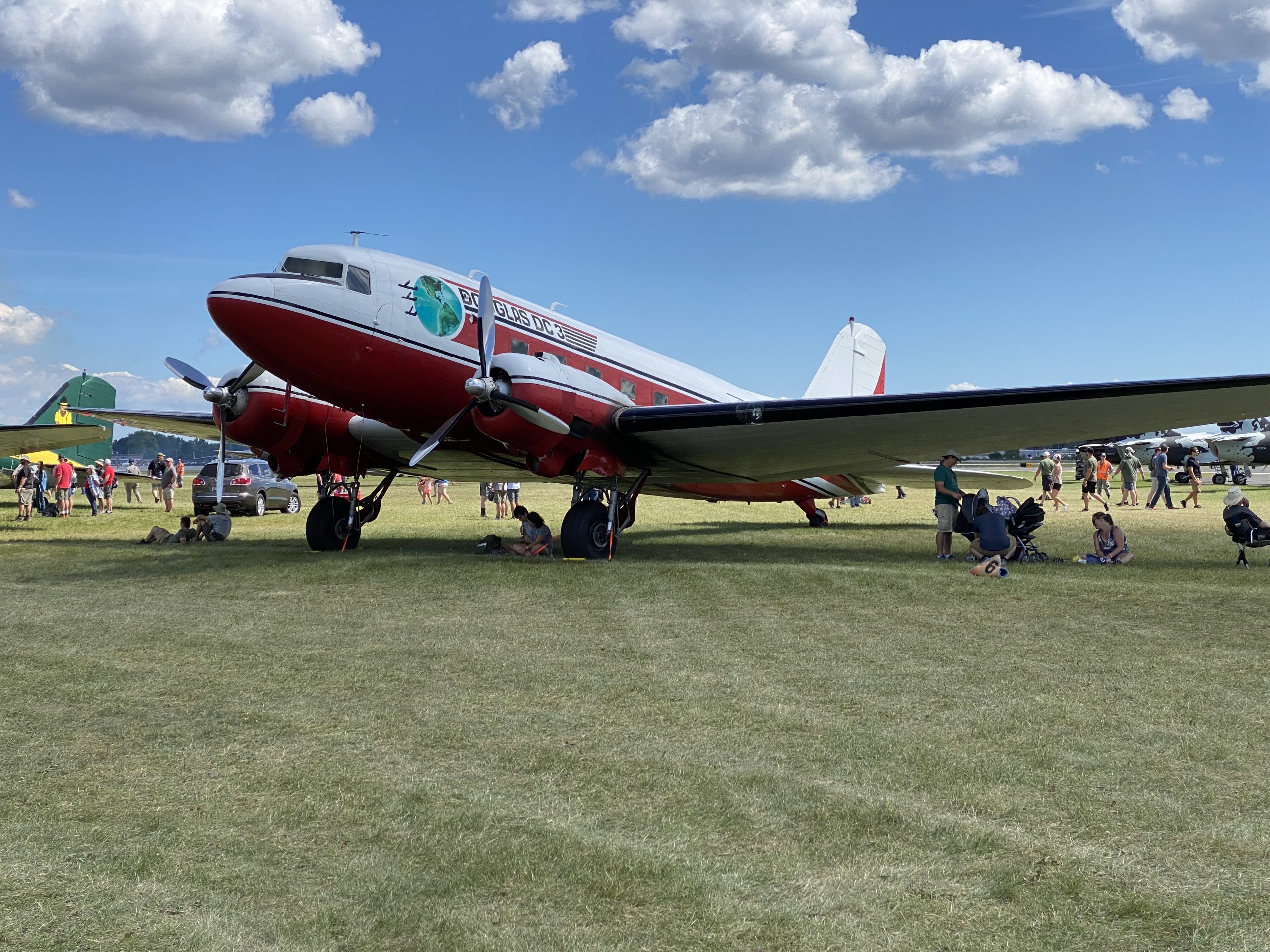 Back in 1934, a four-year-old American Airlines (then known as American Airways) approached the Douglas Aircraft Company with a request for a new plane. At the time, the airline was flying Curtiss Condors in passenger service, but newly-appointed company president Cyrus R. Smith felt that they weren’t enough for his vision of a transcontinental airline. His request to Douglas was for a roomy plane with sleeping berths like a Condor, but with the speed and modernity of the then still new Douglas DC-2. Douglas was reluctant at first, but committed to the idea after the airline informed the aircraft maker that it intended to buy 20 of them.

Douglas Aircraft first envisioned the new plane being a bigger DC-2, but realized that there was going to be a lot more work than that. The Museum of Flight details some of the development of the aircraft.

The fuselage became longer and wider with rounded sides, the wings and tail surfaces were enlarged and strengthened, the nose section and landing gear were modified, and new, more powerful Wright engines were installed. Despite superficial similarity to the DC-2, the DC-3 eventually shared less than 10 percent of parts with its predecessor. The first versions of the new DC-3, called Douglas Sleeper Transports, began service with American Airlines in 1936. 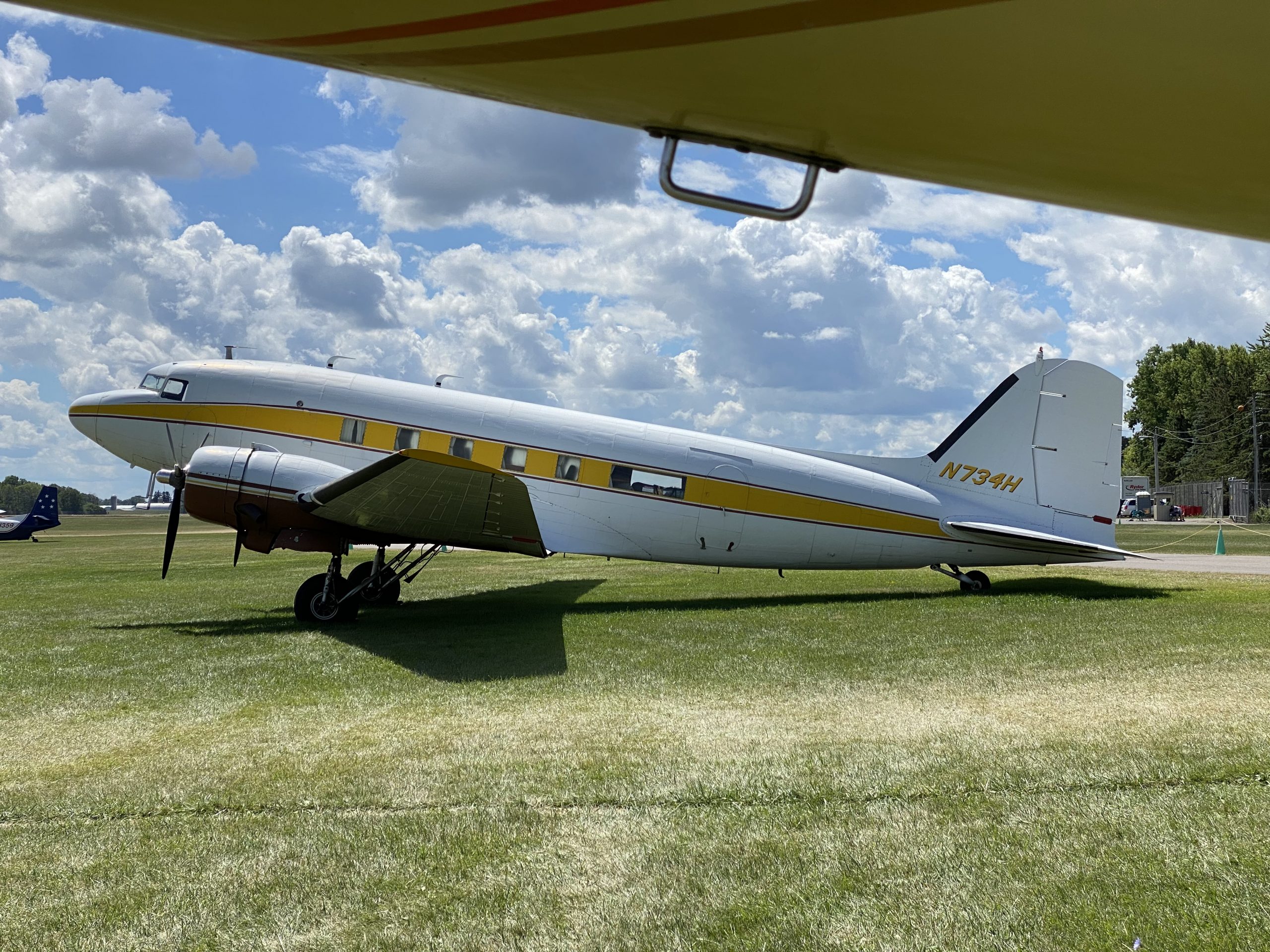 As the museum notes, the DC-3 turned out to be a hit out of the park. The aircraft was so economical and so popular that it helped the civil air transport sector grow rapidly. As the Smithsonian Magazine writes, this was in-part because the DC-3 captured the minds and hearts of American travelers. Before the DC-3, plane trips often required up to 15 stops, plane switching, multiple airlines, and over a day of travel. The revolutionary DC-3 crossed the country with far fewer stops–around three–and far less drama.

The experience onboard also won over travelers. These planes took off gently, powered through headwinds, and arrived on-time. In the air, passengers enjoyed a luxury flying experience involving cocktails, great food, and even conversations with the captain. The magazine goes on to note that the DC-3 was one of the first planes that were profitable on passengers alone. And by 1940, 80 percent of the world’s airline fleet was DC-3s.

The DC-3 also played a huge part in World War II, where it flew troops and cargo as the C-47 Skytrain, C-47 Dakota, R4D-8, and other variants. 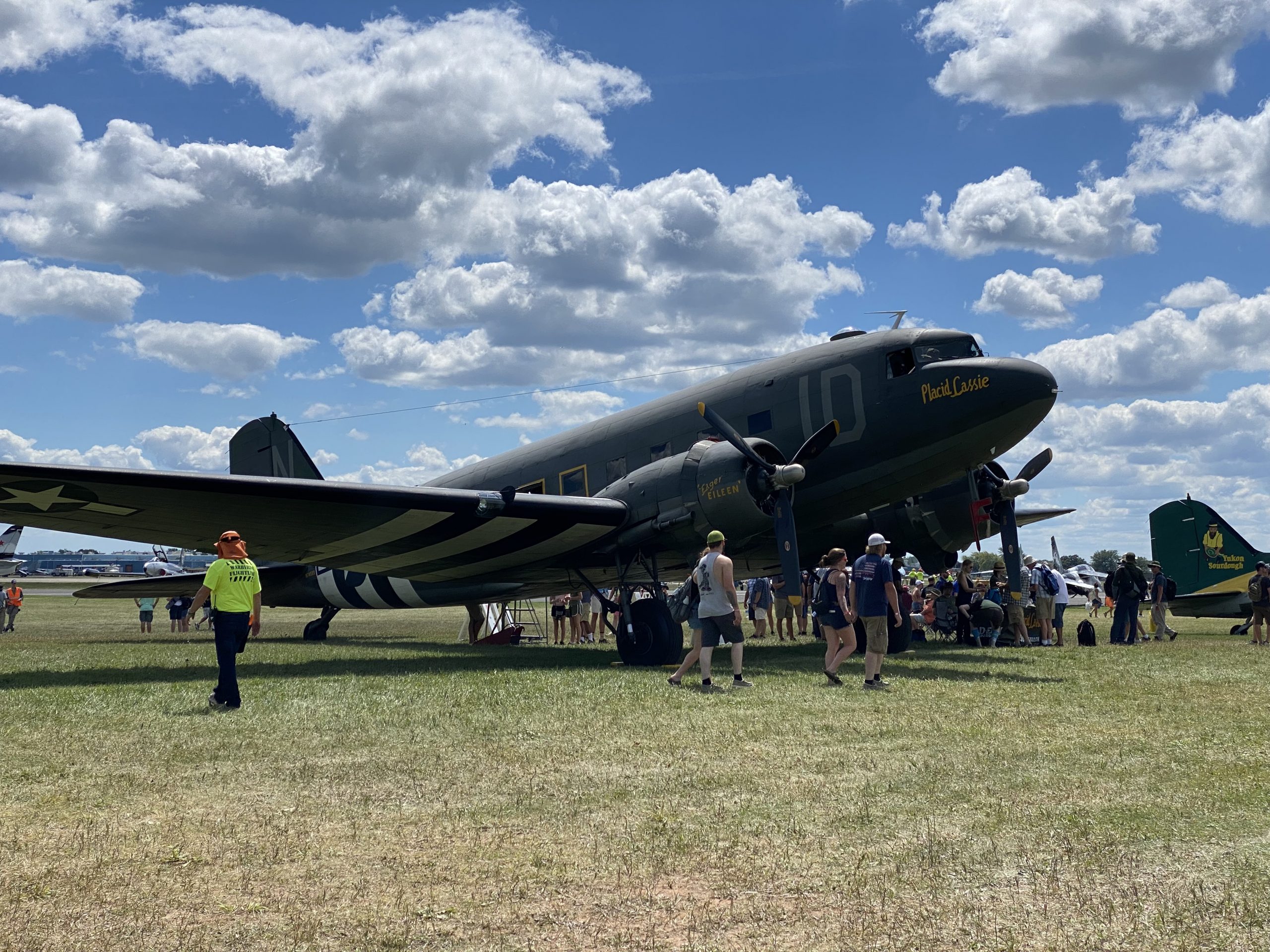 Some 445 were built as airliners with an additional 10,174 built into C-47s. These planes are generally regarded as a major contributor to the war effort, and the stories involving these planes in the war appear to be endless.

Many examples that were built for the war effort eventually ended up in commercial service. And that brings us to this DC-3C, named Yukon Sourdough. It was built as a C-47 in 1942 for the U.S. Air Force, registration 42-92464. The C-47 was shipped off to Canada, where it flew as Canadian Air Force Dakota IIIU FZ675 (later, number 960).

Then came Air North. In 1977, Air North opened in western Canada and started providing commercial service between the Yukon and Alaska. The airline picked up the C-47 in 1982, changing its registration to CF-OVW and making it a Douglas DC3C-S1C3G. The airline reportedly had a knack for giving its aircraft gold rush-themed names, and thus, the plane was named Yukon Sourdough and given distinctive art on its vertical stabilizer. 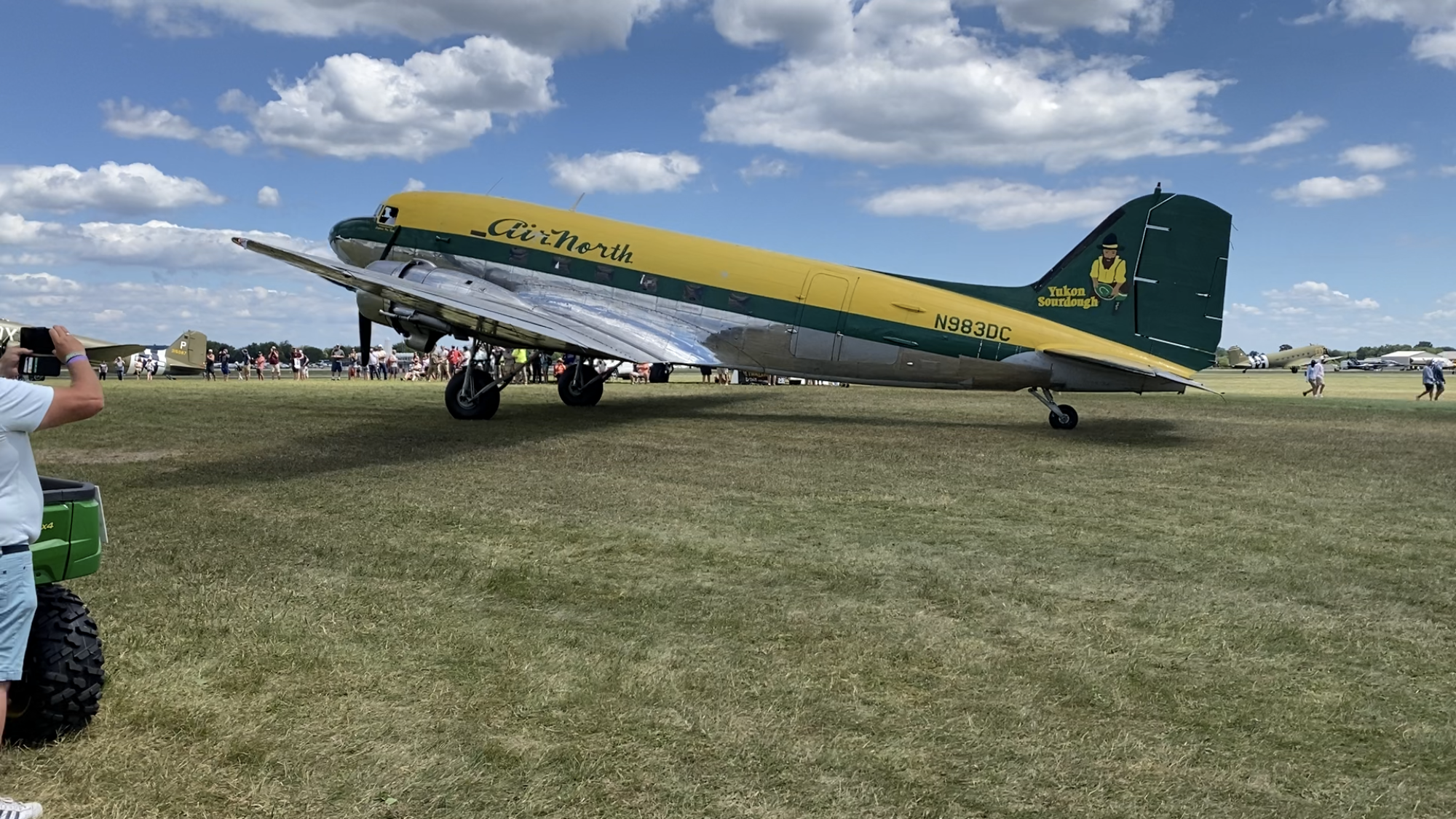 The DC-3 flew with the airline until 1998, when the Experimental Aircraft Association (EAA) purchased it and restored it. When EAA’s plans for a DC-3 changed, it was sold to retired Northwest Airlines pilot Stephen K. Van Kirk. Captain Van Kirk then flew the plane for years before it got damaged in a storm in 2010, rendering it grounded.

At some point, Stephen and his younger brother, Malcolm, decided to sell the aircraft. Pilot Ken Casady reportedly saw the ad and spoke to the brothers, figuring out that they really didn’t want to sell it. Instead, they decided to restore it. Eventually, the team grew to include another owner, Derek White, and others who all worked to get the aircraft airworthy again.

The team spent years working through a myriad of projects on the plane, from getting its ignition system working right to restoring the long-faded illustration of a gold miner on the aircraft’s tail. Some of it is detailed on the plane’s Facebook page. As the team’s work drew nearer to completion, Captain Van Kirk set a goal of flying the plane for the first time in 13 years and making it to EAA AirVenture Oshkosh. 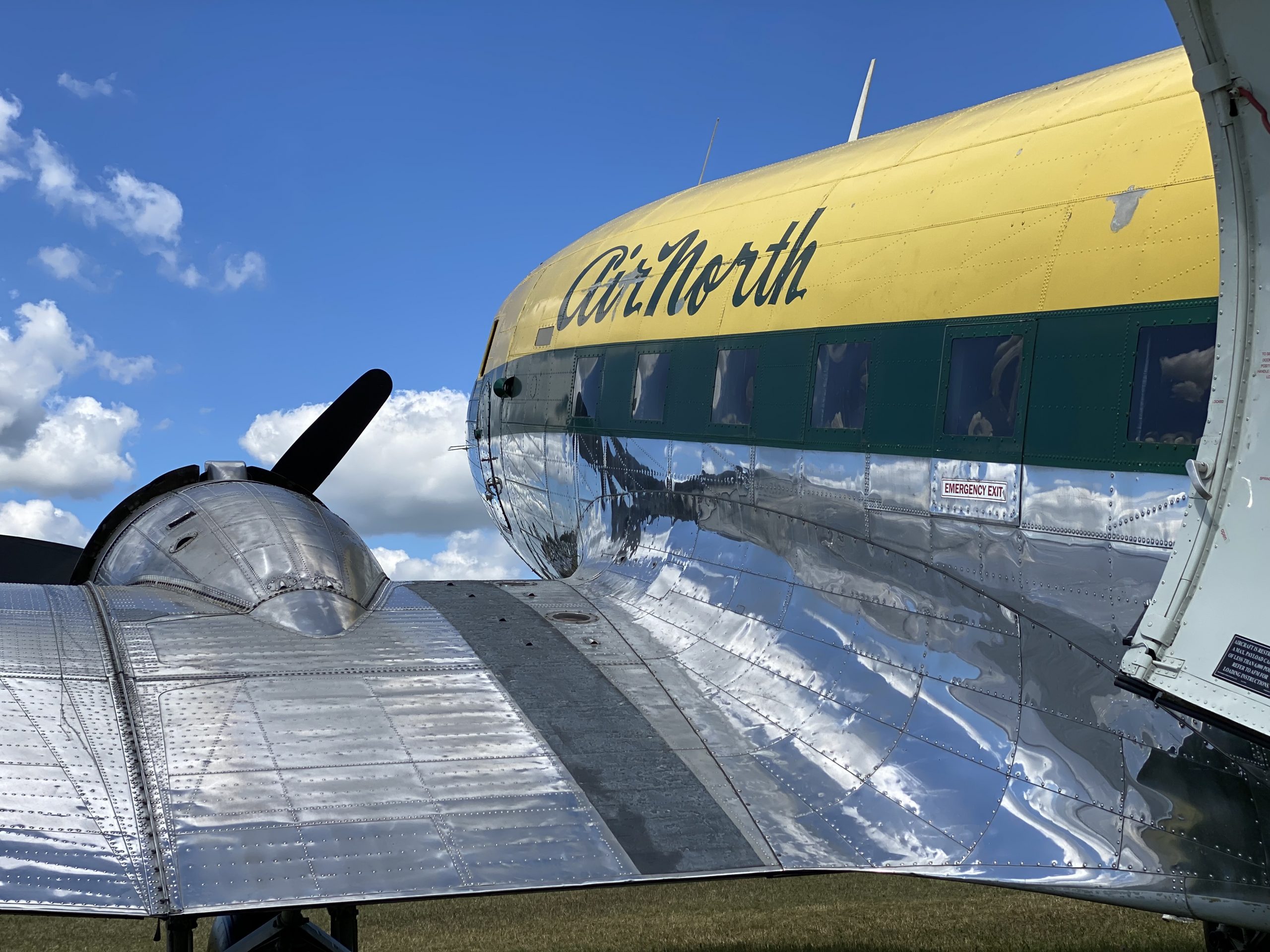 Unfortunately, he passed on July 1, but the team actually succeeded. The aircraft took its first flight in 13 years in early July, and made it to Oshkosh, where thousands of folks like myself got to see it. Yukon Sourdough’s owners also decided to honor Captain Van Kirk by inscribing his name next to the cockpit.

And since I was there on the weekend, I even got to see it depart for more adventures.

The team of volunteers intend on keeping the Yukon Sourdough operational as a flying piece of history. But that is an expensive endeavor. After all, it’s an 80-year-old bird that needs insurance, maintenance, lots of fuel, and a place to store it. Casady says that flying the thing costs $1,500 an hour.

Amazingly, the team has kept it in the sky, and continues to take it around the country. However, the team is looking for donations to keep it flying. It looks like the team hasn’t set up a way to donate to the cause yet.

For me, the most amazing part is just to see pieces of history like this still flying. But that’s a part of the DC-3’s magic. It’s estimated that under 200 of these are still flying, and some are still in commercial service in some parts of the world. Hopefully, this one will be able to continue its new career of wowing plane fans all over.

(Photo credits to the author unless otherwise noted.)

Mercedes is a lifelong fan of all things powered by an engine. When she isn't driving one of her five Smart Fortwos or her 14 other vehicles she could be found in the cockpit of a Cessna 172 or perhaps swimming in any body of water that she could find. She also has a deep love for buses of all kinds. Please send her buses. mercedes@theautopian.com Instagram: @mistymotors Twitter: @Miss_Mercedes30 Facebook.com/neonspinnazz
Read All My Posts »
PrevPreviousHow I Modernized My Old Car’s Audio System With This $18 Bluetooth Receiver
NextThe Chrysler Aspen Hybrid Was A Hemi V8-Powered Towing Beast That Got Over 20 MPG: Cold StartNext