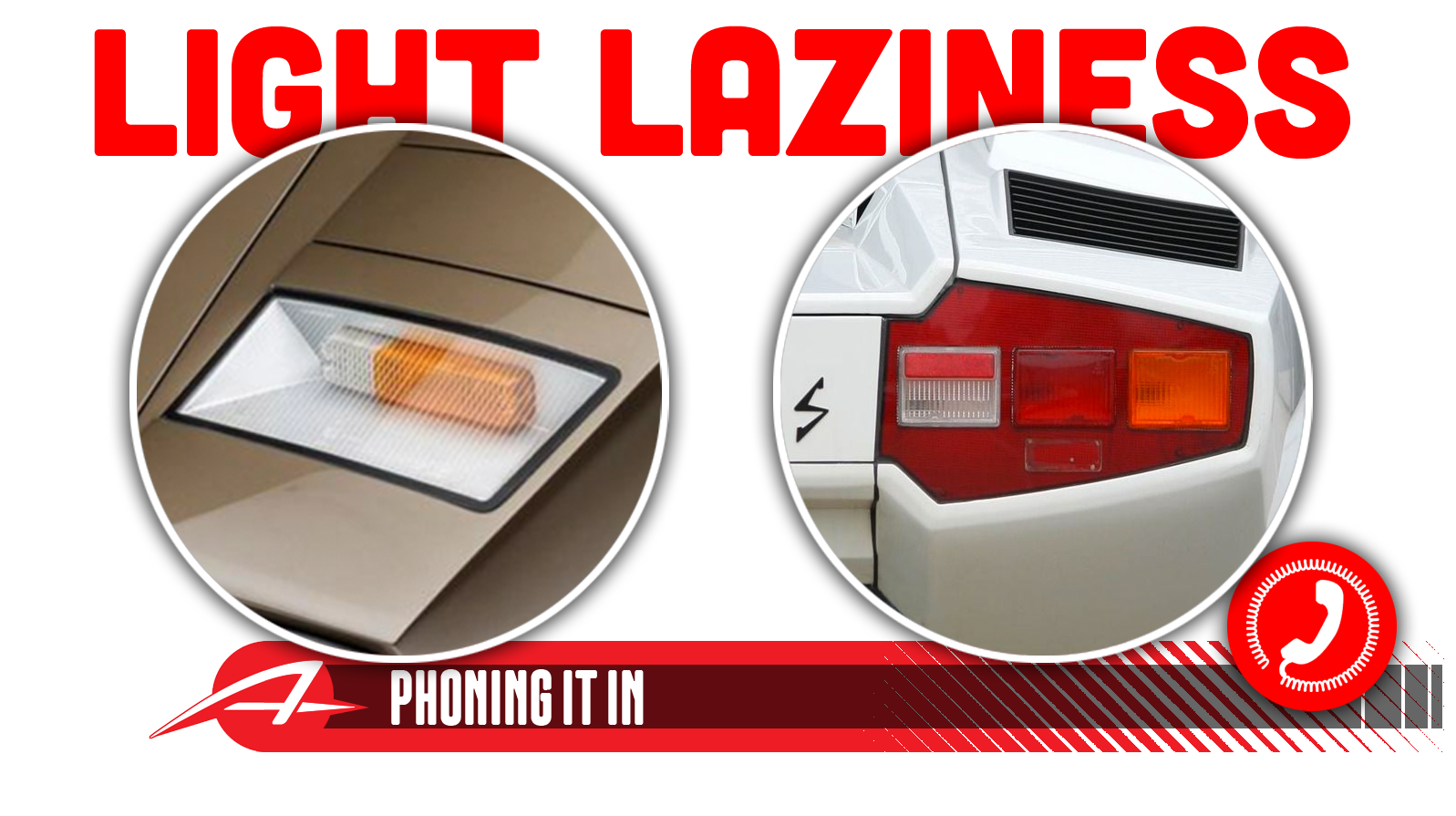 The lights on the Countach that I’m referring to specifically — the front sidelight/indicator units and the taillights —are really the only lights that are actually seen on the car, since the headlights themselves are hidden under covers.

Let’s start with the taillights first, because they’re more dramatic and maybe a bit more tragic. Let’s look at the rear of the Countach LP500 of 1971, the design concept that served as the basis of what would later become the Lamborghini Countach:

Here you can see the conceptual ideal of the taillights, units that completely fill those two six-sided, pointed pods at each side. They’re dramatic and exciting, fitting the look and character of the car perfectly! Now, let’s look at the production Countach: 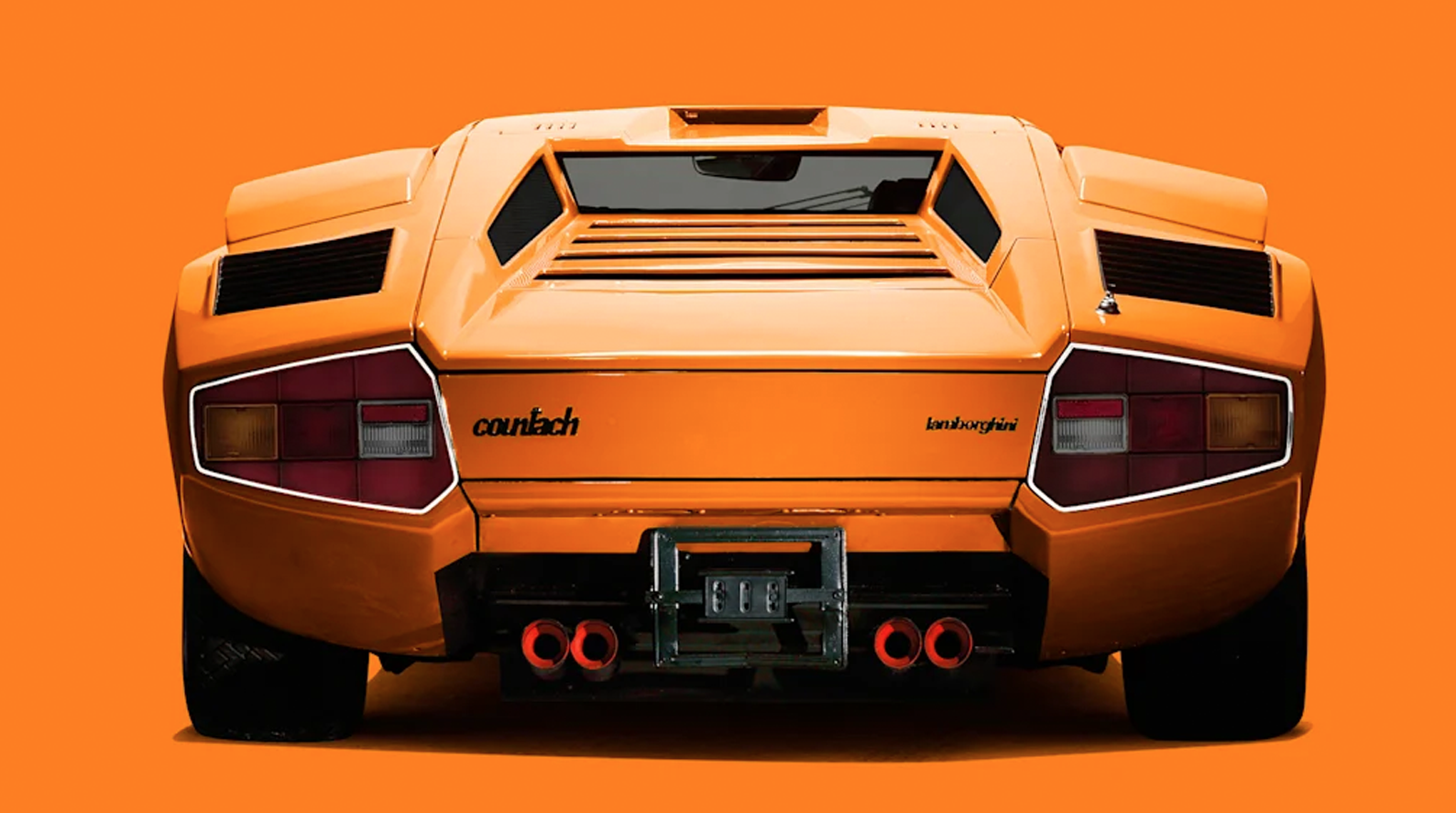 What’s noticeable here is that Lamborghini came close to the sort of taillight they wanted: a six-sided unit that seems to fill those areas completely. But there’s something that doesn’t look quite right about them, and this becomes clearer when you look closer: 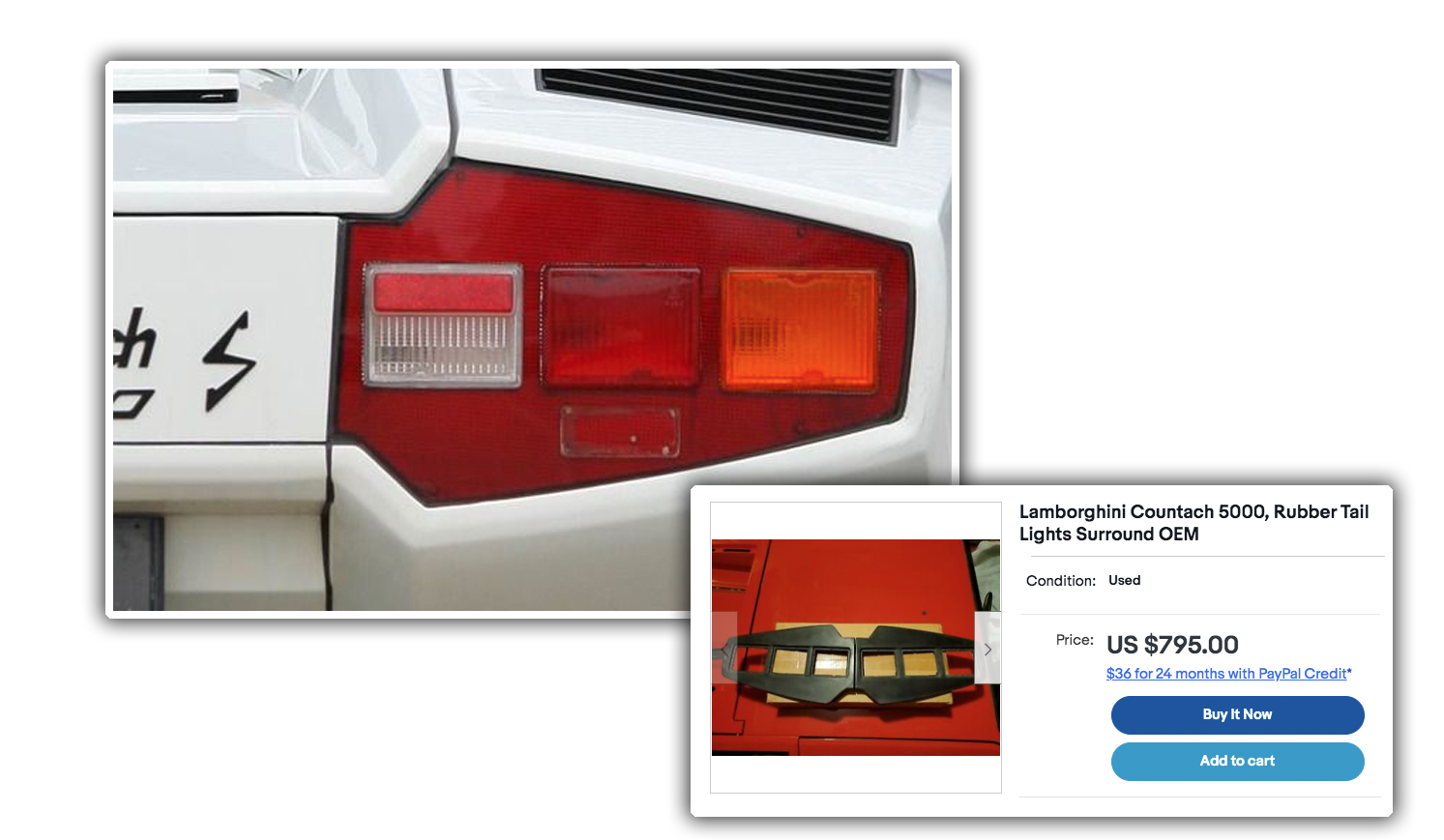 See? It’s a set of three square lights that are the actual taillight, plus a shaped reflector panel that must not actually reflect properly, because there’s another reflector inset under the middle lamp, despite the reverse lamp having its own reflector. It’s clear what the designers were going for, but it’s kind of kludged together.

Also, look at that eBay link there: Holy crap are those replacement taillight filler panels expensive! And that set is black rubber, not even fake-taillight red! Here’s a red one for sale: 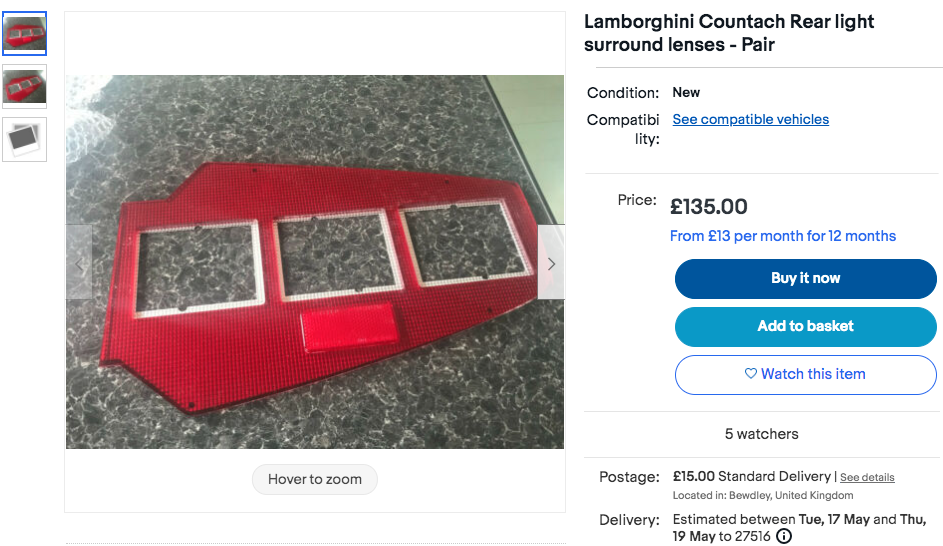 Why is that so much cheaper than the black rubber ones? I don’t understand Lambo owners.

Of course, even this is better than some later Countach versions that ditch the shaped reflector panel altogether:

In this case, Lamborghini just quit even trying to match the shape of the area in which the taillights were designed to fit. The car now just relies on the square lights themselves, which Lamborghini lifted right off the ass of a 1972 Alfa Romeo Alfetta: 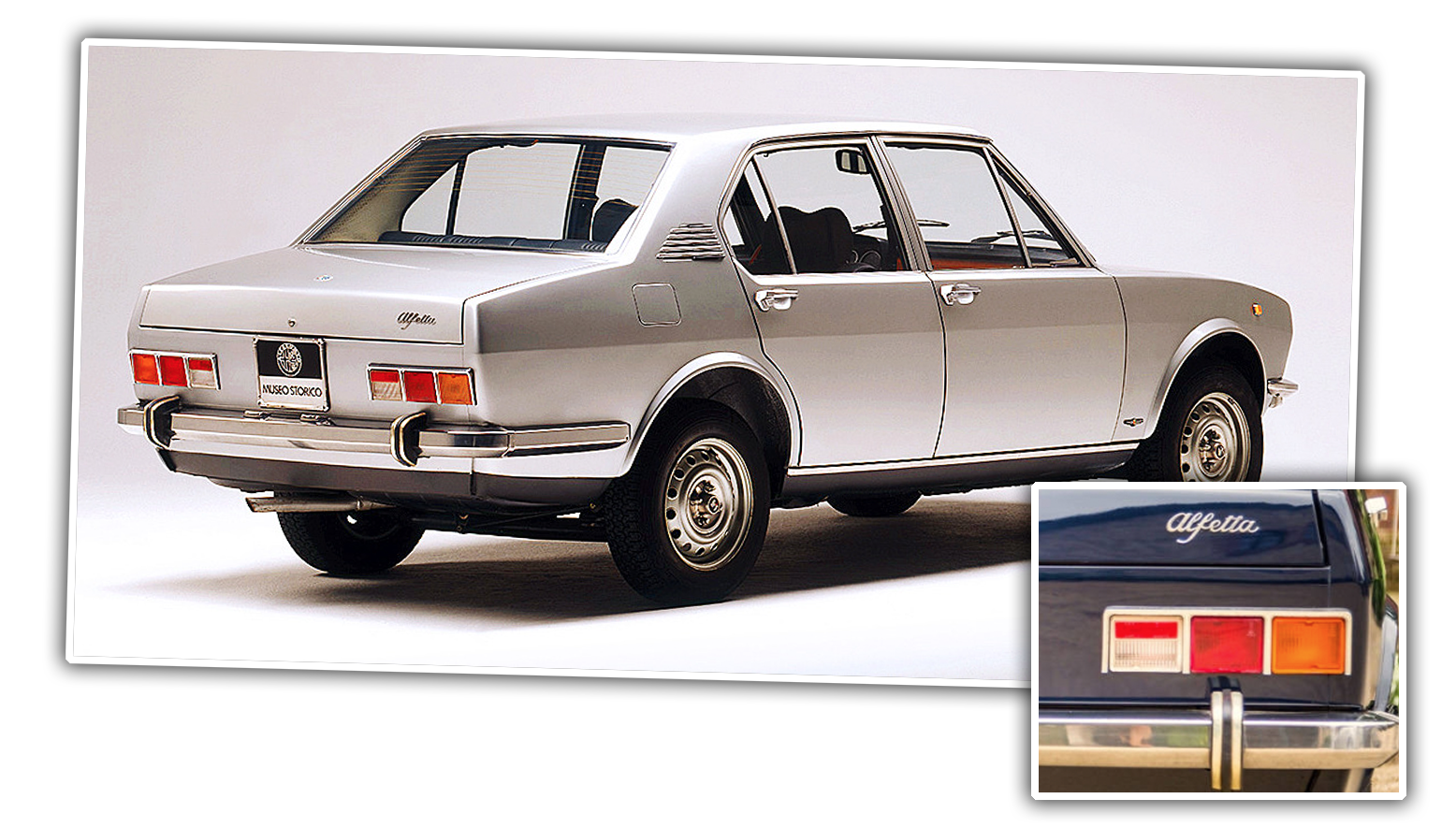 Now, on these crisp, boxy little Alfetta sedans, those three-block lights work quite well, I think; but slapped on the dramatic angles and sweeping lines of the Countach, they feel like someone just ordered the first thing they saw in the parts catalog.

It was such a strong initial design, and Lambo’s solution feels just so half-assed for a car as exclusive and expensive as this. Make some custom lights, you lazy bastards! They would have looked so good!

I still don’t understand why the car needed that extra little reflector, either.

Okay. Let’s go around front and see what we have going on:

Looking back at the prototype LP500 Countach, we see that up front there are the covered pop-up lights, and ahead of those is some sort of flat, square, flush-mounted light panel that must house indicators and side/parking lights. Very cool. So, how was this design executed on the production car? Like this: 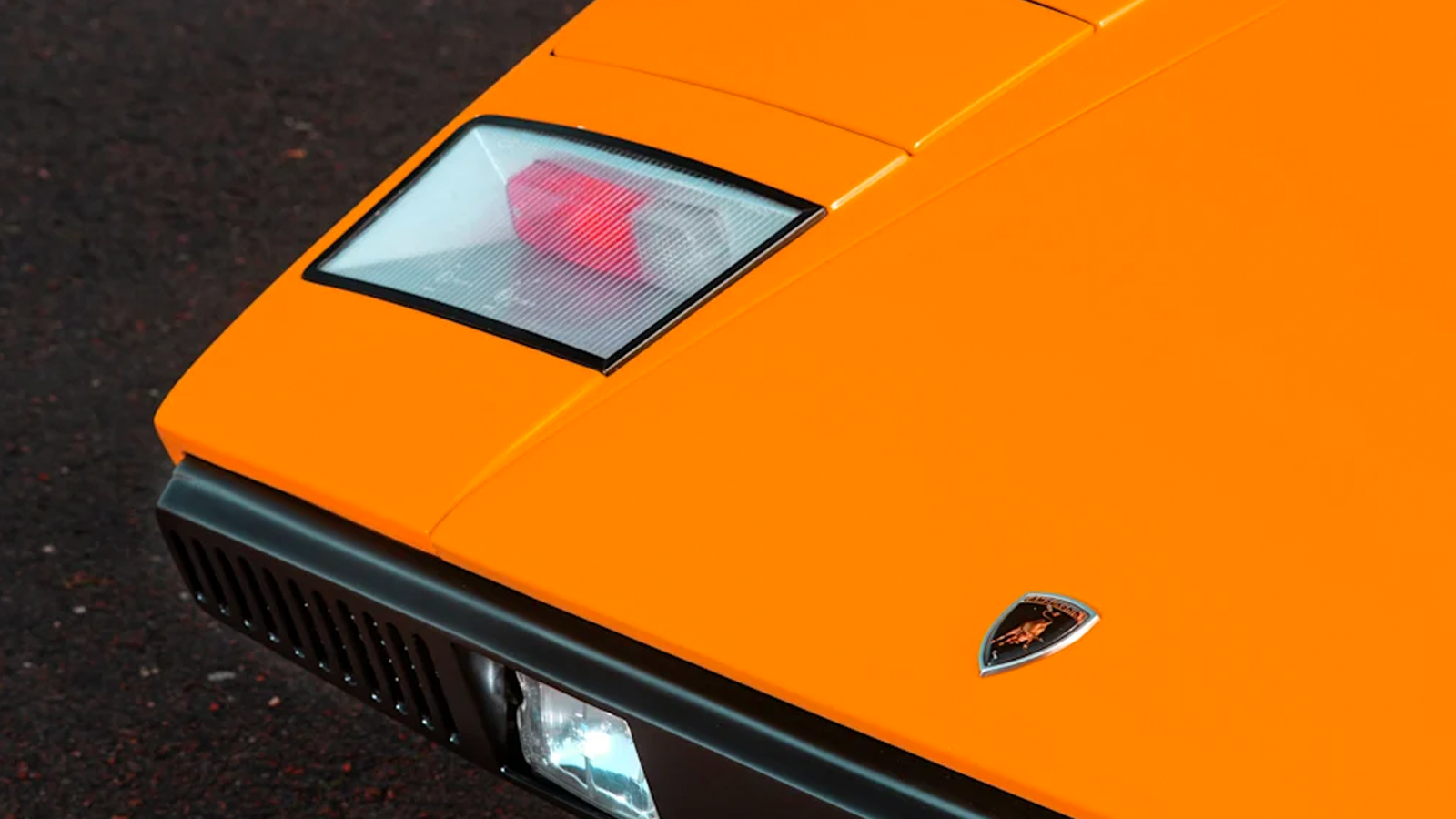 It looks like Lamborghini just made a little cubby, lined it with aluminum or something silvery, then found the cheapest possible parts-catalog trailer lights they could get, and stuck a ribbed plexiglass panel over it and hoped no one would notice. Have you ever seen the actual light unit outside of its little hood-greenhouse there? Look at this crap: 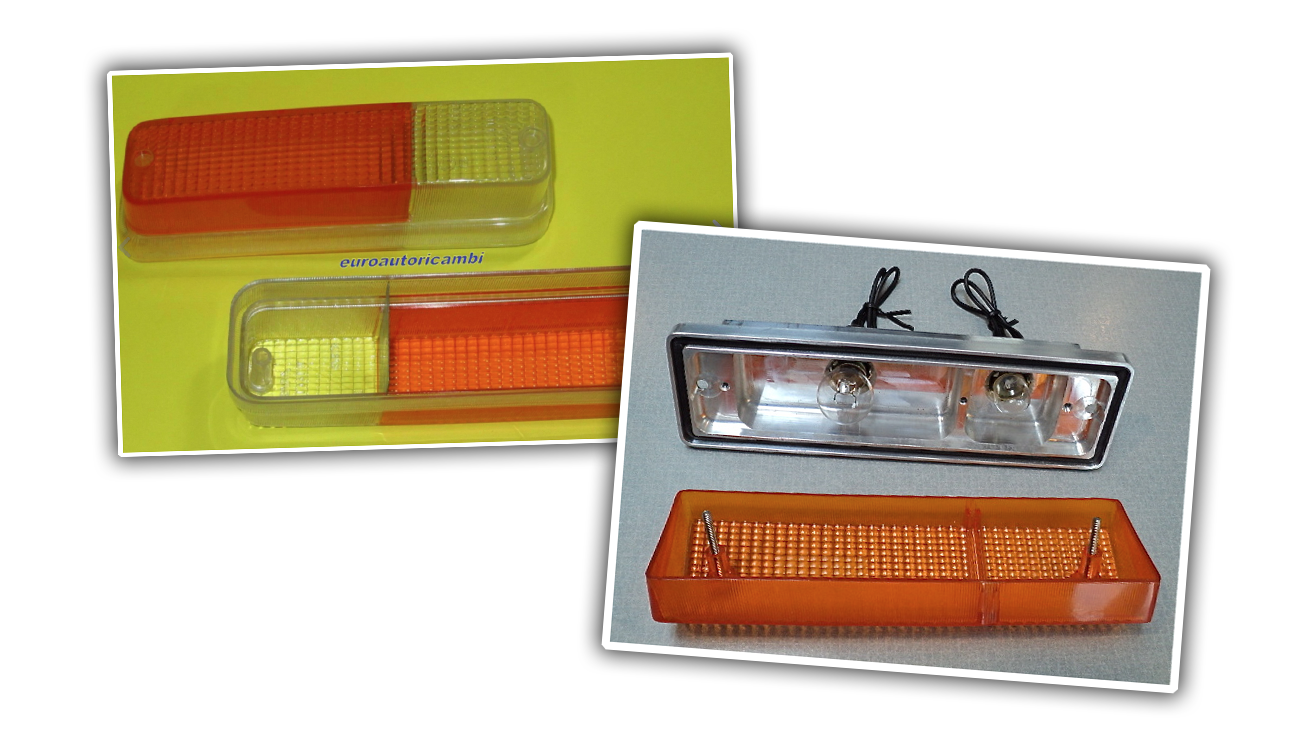 I mean, they’re fine, for, you know, a Civic or something, maybe mounted unobtrusively under a bumper, happily doing its job indicating turns and illuminating a side or two. But as one of the major pieces of visual detailing on the front of a supercar? Come on.

I know Lamborghini thought they could get away with it by hiding it under that ribbed plexi and giving it its own shaped little cloister there, but you know what? That kind of just makes it worse!

I mean, look at this: 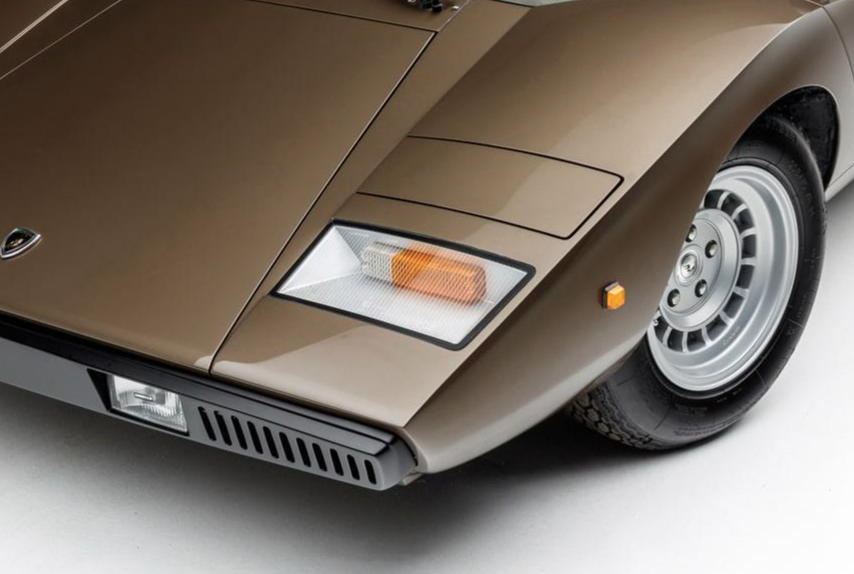 All those wonderful swooping lines and creases! All that drama and motion and excitement! And then there’s that clunky-ass light, perched in there, looking even shittier by comparison, like if you opened a Fabergé egg and found a rubber dentist-office-toy-box finger puppet inside.

It’s just a glaring, obvious letdown. This is a Lamborghini! They could have made that huge expanse of dedicated light area into something wonderful, with custom parabolic reflectors and multiple bulbs and whatever–some lighting designer would have loved to do it, but sadly, nobody gave a shit, and here we are.

I know supercars are some of the most notorious light-stealers of any class of vehicle, aside from perhaps RVs. But that doesn’t mean I have to like it, or let it go. Lambo, you really phoned it in, and got away with it, too. For years.

I'm a co-founder of the Autopian, the site you're on RIGHT NOW! I'm here to talk to you about taillights until you cry and beg me to stop, which I absolutely will not. Sorry. Hug? Also, David's friend.
Read All My Posts »
PrevPreviousAmerican Motors Corporation Actually Built This Incredible Van And Now You Can Own It
NextCold Start: Take A Fishing Meeting With Your KidNext