Someone Gave Me A Free Nash Metropolitan In Los Angeles, So I Guess I Have To Move There Now (Updated)

Sunova bitch! I thought I could delay this. For years, I’ve been telling my friends that I plan to move “any day now,” and for years, I just amassed one new vehicle after the other. Winter after winter blew by, and I remained in Troy, Michigan, surrounded by cheap junkers. But then, last month, I fell into what, in retrospect, I now know was clearly a trap. “Fwd: Met & Morris Minor JUNKYARD BOUND SOON!” read the subject line. I clicked it immediately.

“Before long I will call Pick-A-Part and have them tow both cars away,” read the first line, referencing an old Nash Metropolitan and Morris Minor. “Both need work, both have clear Ca. titles and current tags in my name,” the email went on.

“NO ONE WANTS TO WORK ON THEM AT ANY PRICE so it’s time to junk them both,” Nate, the sender, continued. “Sad but I’m physically unable anymore and I’m also broke, barely making my monthly nut anymore so everything has to go dirt cheap or free before I wind up in the street.”

“Please help me get rid of these two cars, need to be towed out.”

This email had, of course, come to be by way of Chief Vehicle Hoarding-Enabler and Autopian cofounder Jason Beauregard Torchinsky IV, which is why I should have known this whole thing was a trap: 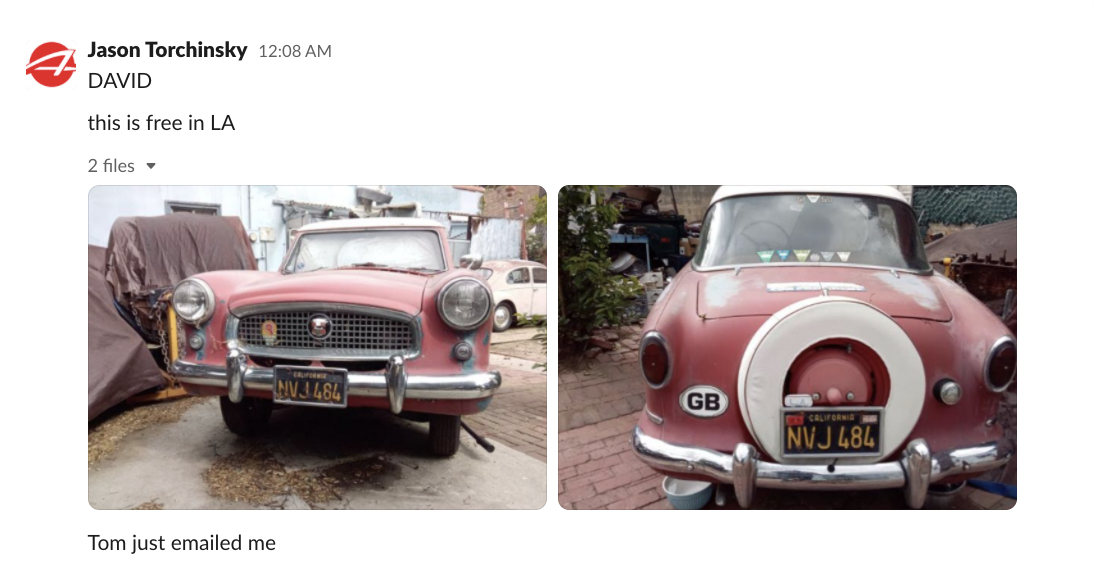 Jason’s lovable gearhead buddy Tom had forwarded Nate’s note our way, and sent along the two photos above. Here’s a closer look: 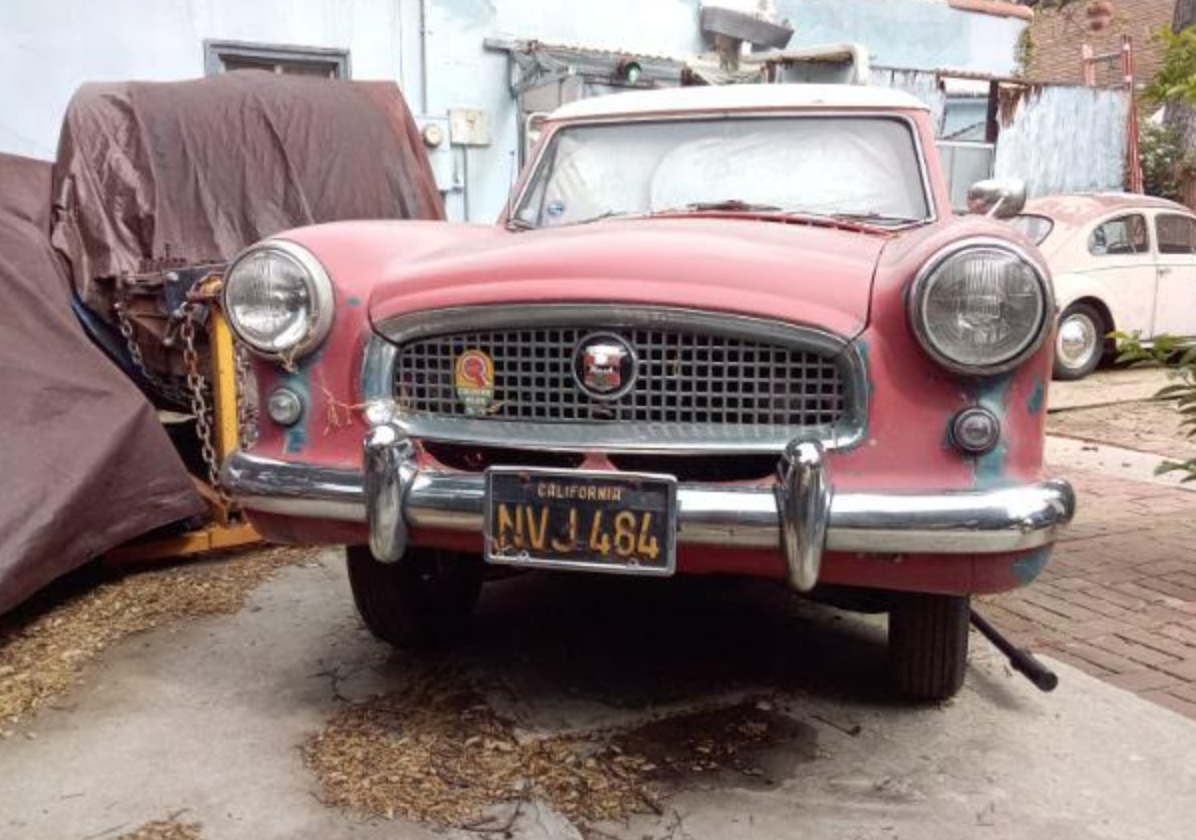 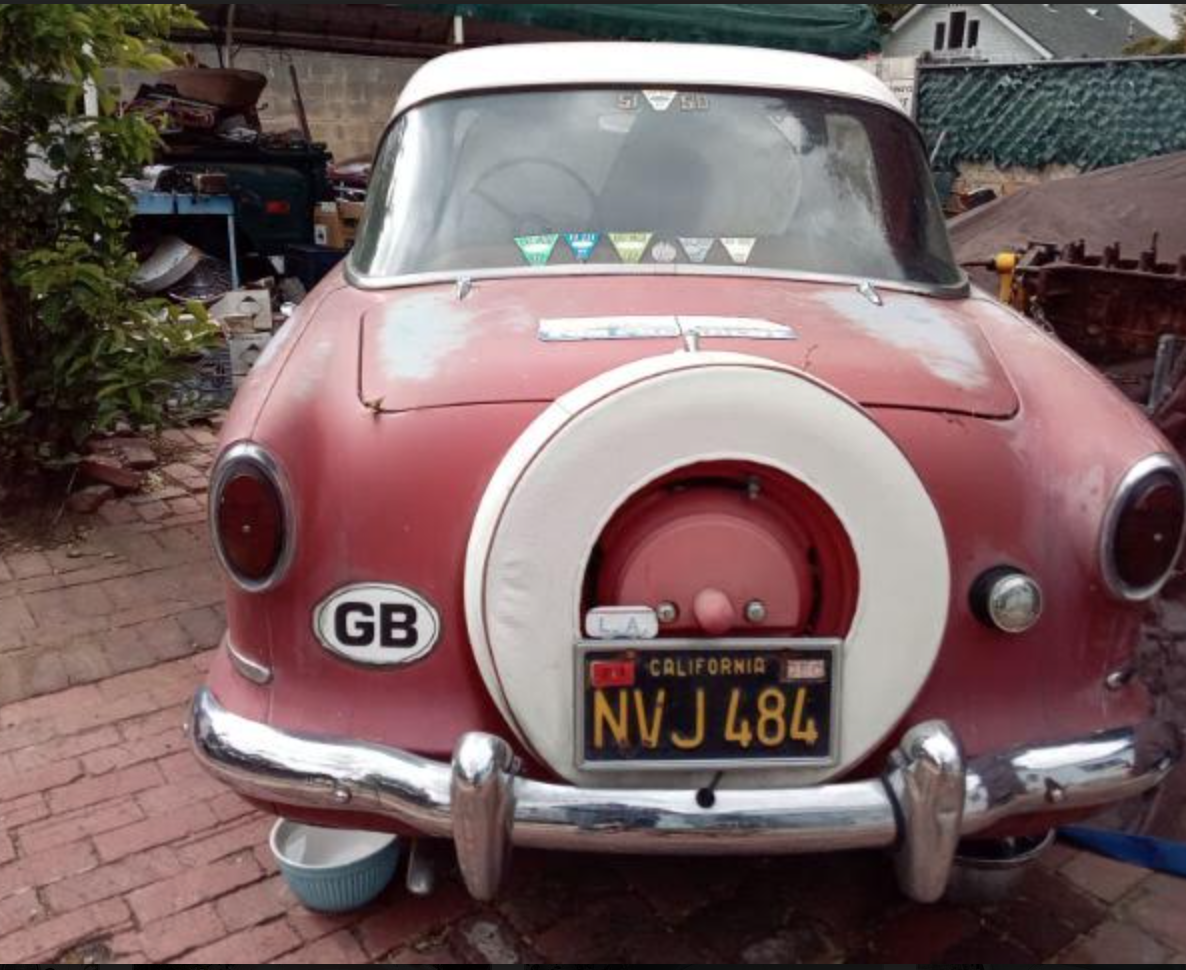 I, being a thoughtful man (read: not a fool) was not about to just let a free Nash Metropolitan — and a rare one with a trunk lid (many Metropolitans had none, so you accessed stuff in the trunk via the front two doors) — just whiz by without at least seeing what was what. I talked to Nate, and he told me that he really just wanted his beloved Met to go to a good home. After all, he’d enjoyed years of just blasting that thing around LA at high speeds. Check out how this Met looks with the paint all shined up: 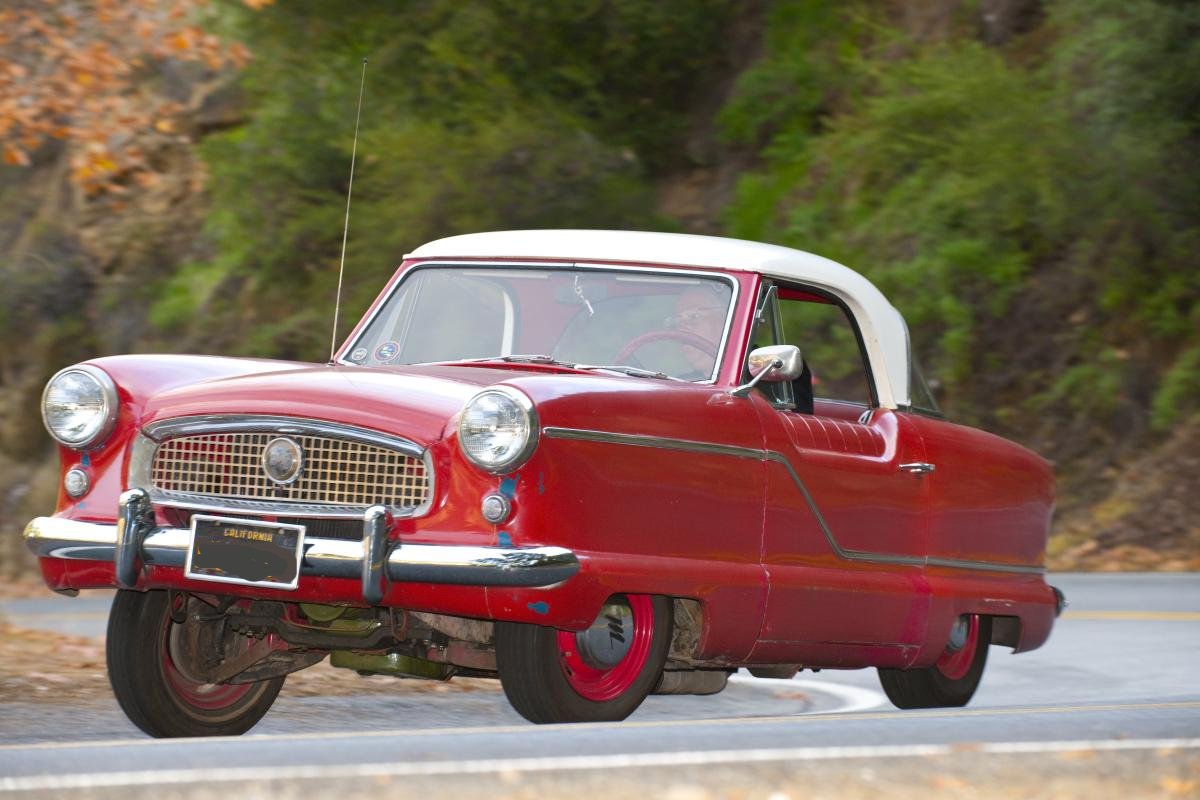 Anyway, I sent Nate a few articles of mine, namely the ones about me daily-driving a 1965 Plymouth Valiant for an entire winter, and about driving a 1948 Willys CJ-2A and a 1976 Postal Jeep from Michigan to the off-road trails of Moab, Utah, and Nate ate that stuff up, replying:

You’re obviously the person to save my Met, I hope you’ll find if fun and rewarding, I did and drove it hard for well over a decade all over the South West .

Please save the Morris Minor too….

The Morris Minor, by the way, is an awesome little British Economy car from a similar era as the Nash, and appears to just need to be put back together; the body looks solid: 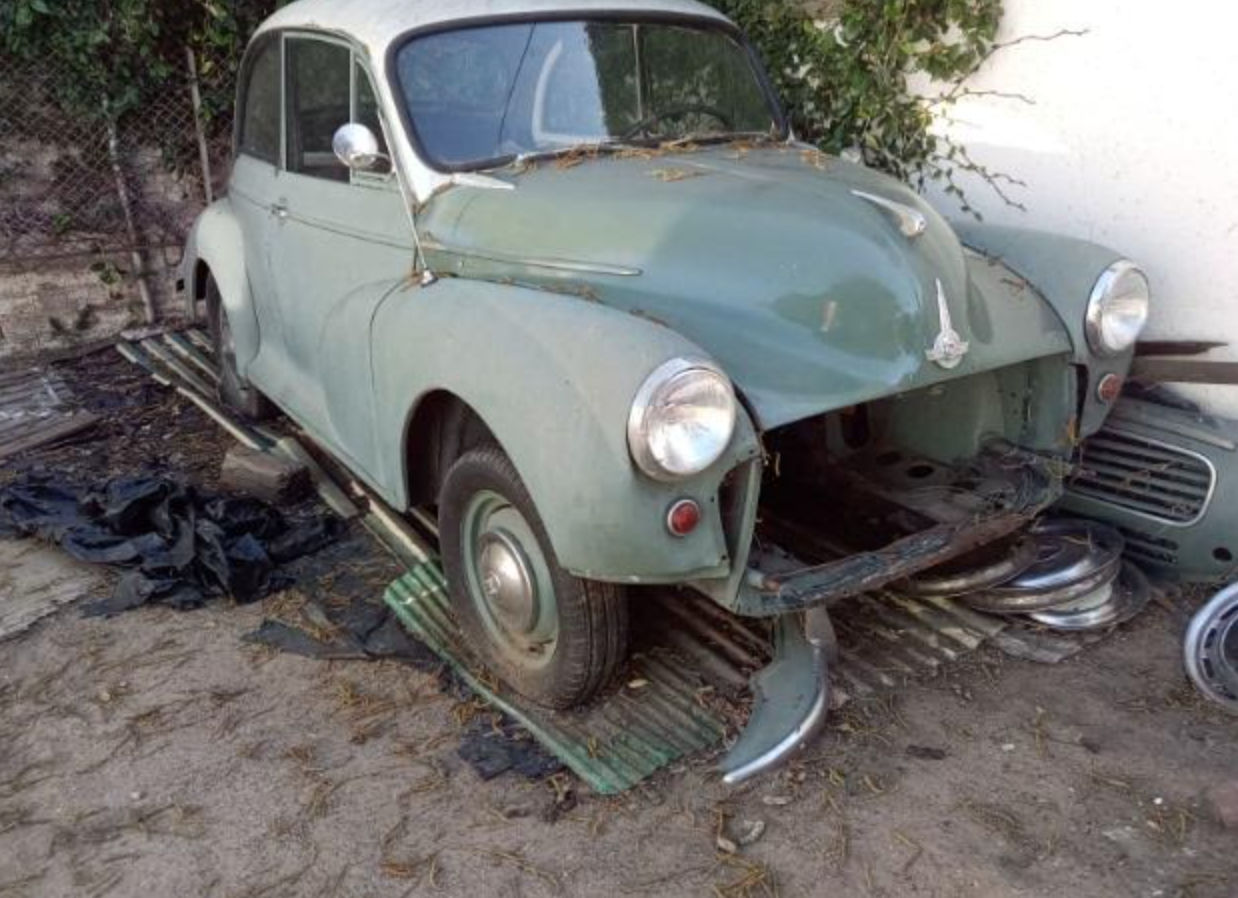 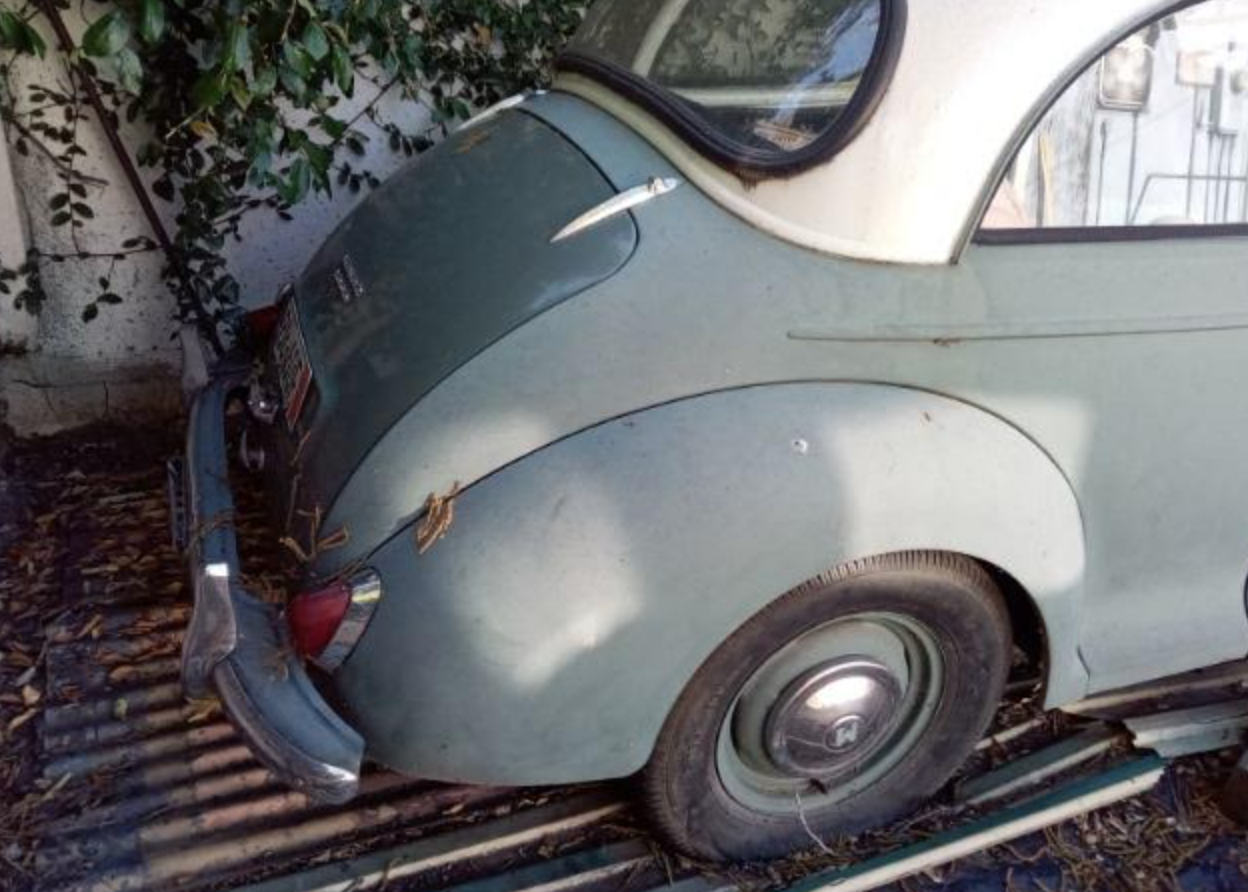 Jason’s friend Tom decided to take on that project, bless him, though I have to admit that I have quite a bit of work ahead of me, too. “I rebuilt the engine about 35,000 miles ago, std. Bore,.” he texted me. “New pistons etc but didn’t replace the .030/030 crankshaft. It was fine until I bumped the distributor, gave it too much timing advance, then I flew across the Arizona desert and beat the rods to death.”

He told me he has a standard crankshaft that goes with the vehicle, and even gave instructions on how to install it — instructions that make the rather tedious job actually sound rather easy:

“Engine and transmission come out together from below, separate tranny, flip engine, replace crankshaft (is in the car) and all bearings and thrust shims, button it back up and good to go.”

Not at all daunted, and actually rather keen to get wrenching on this little thing, I called up my team out at Galpin Ford, since the company is located only 20 minutes from Nate. Beau Boeckmann, the man behind The Autopian’s existence, and his VP Jeff graciously agreed to store my project car, and Jeff organized the pickup. He sent a flatbed to Nate’s house; Nate send me a few photos of the pickup operation, noting that he had lots of spare parts in the car, including a bolt of fabric to reupholster the door-cards. He also made mention of the keychain, which he’s apparently rather proud of, and. included photos of other Nash memorabilia: 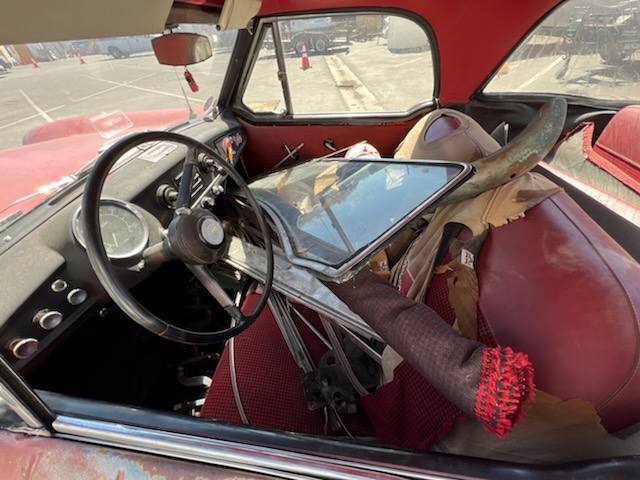 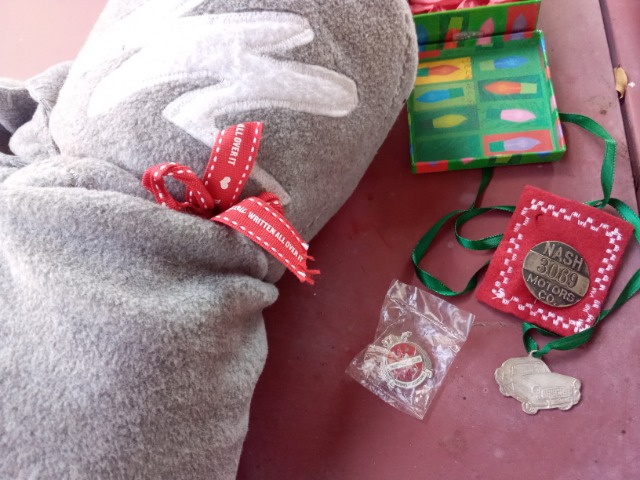 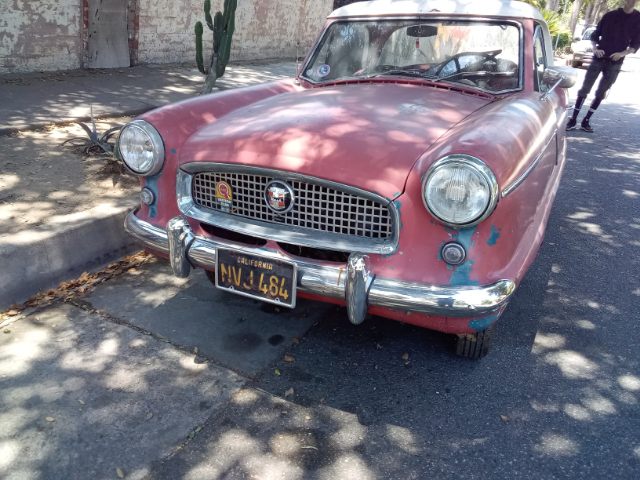 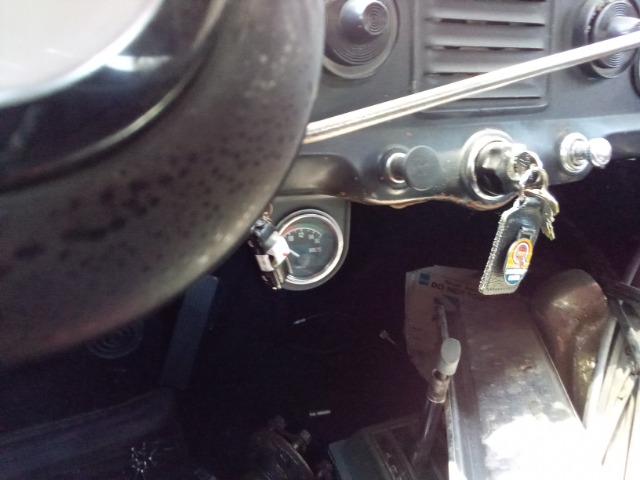 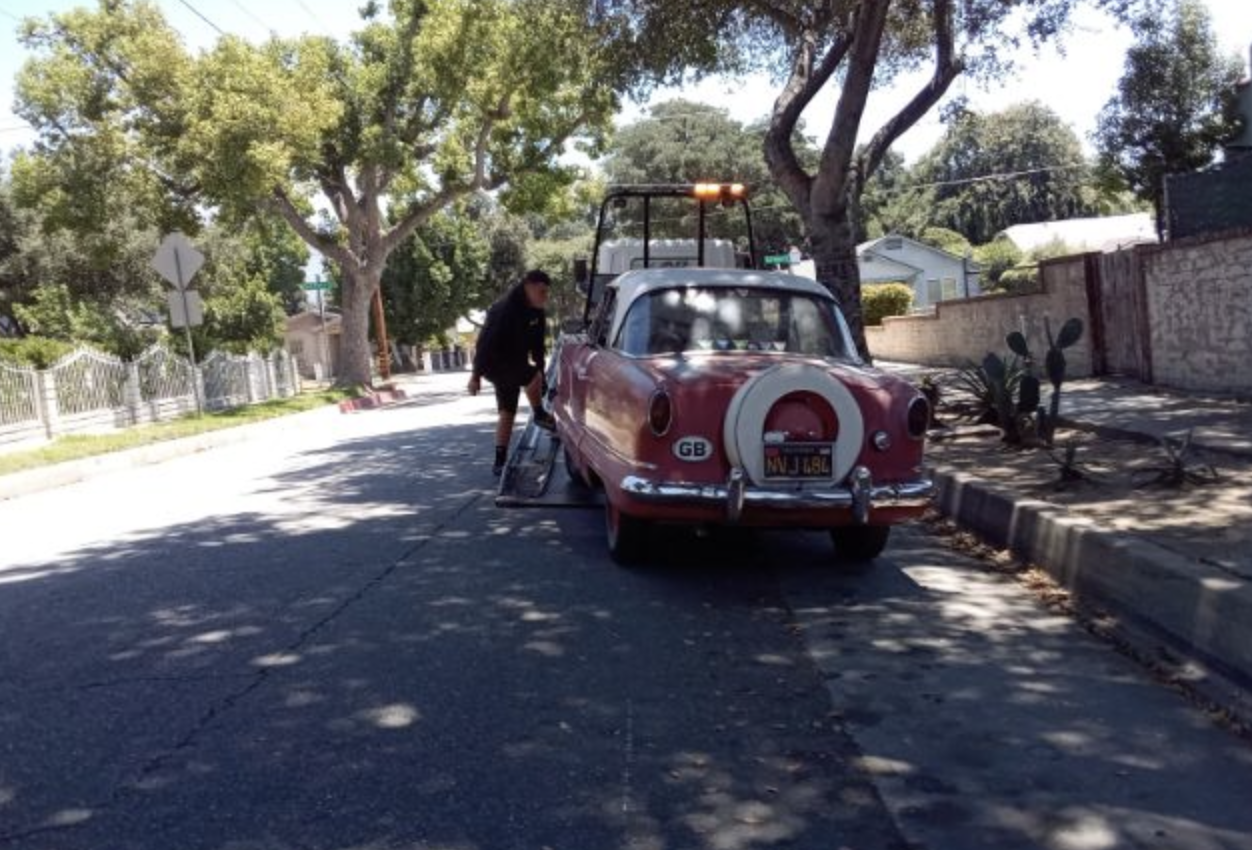 It’s clear to me that this Nash wasn’t just a car to Nate, who told me all about the many parts he’s put into this car over the years, including new brakes, a new electronic ignition, and a newly de-rusted fuel tank. The little 1950s car represented a glorious era in this man’s life, and though I haven’t spoken with Nate enough to fully understand what that era was, I do plan to get this little machine back on the road as my primary LA daily driver. And I’m giving Nate a ride as soon as I do. 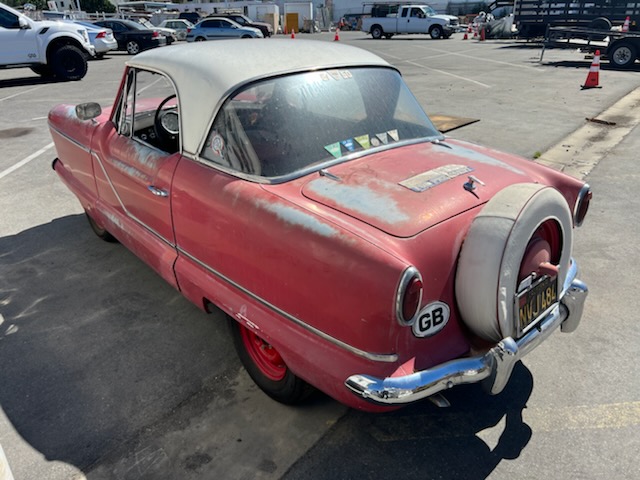 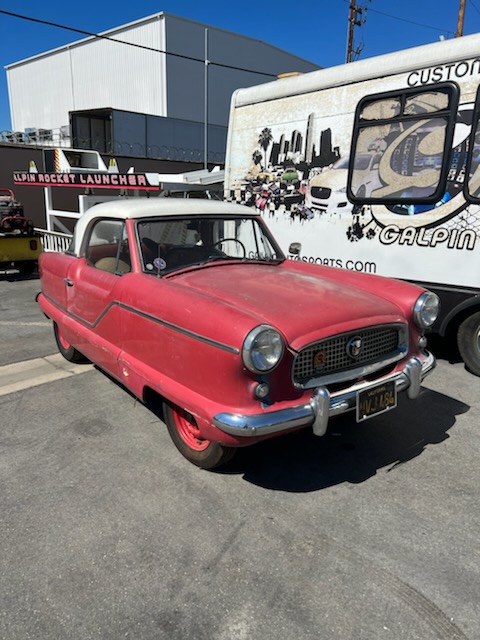 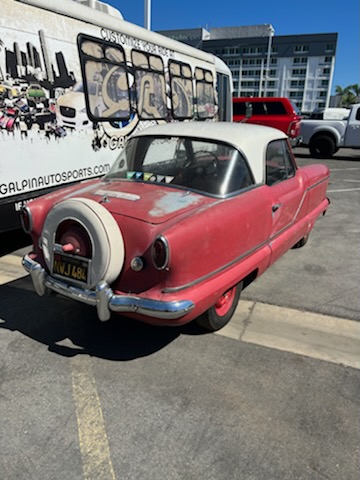 Right now, the car sits on the Galpin property somewhere. I’m going to be getting a first look at it in August, when I fly west for Pebble Beach, an event for which I have far, far too many redneck tendencies. Eventually, I’ll be flying west permanently, and this little Nash will be my commuter. I’m actually quite thrilled that Nate gave me this car (I plan to give him some money for it, as I can’t take something this cool for free), because I’d actually been looking for a small car for Los Angeles. Fuel prices there are absurd, and none of my current vehicles do better than about 15 MPG in the city.

Right around the time Jason notified me of this incredible Met, I’d sent him a listing for a King Midget, arguably the U.S.’s first-ever microcar. With a top speed of only 50, it’d be a sacrifice, no doubt, but at 50 MPG, it’d make cruising around LA somewhat affordable. Highway jaunts, though, would be a problem.

This Nash, though, ticks all the boxes. Its little 1.5-liter “B-Series” four-banger from British automaker Austin will do 35 MPG in the city and over 30 on the highway. And I do mean “highway,” because though the car had a top speed of 75 mph, and though most Metropolitan owners will tell you that that’s rather ambitious given the three-speed and 4.22:1 rear axle ratio, Nate swapped his rear diff for a 3.73:1 gearset, meaning the car can apparently drive 75 “all day,” per Nate. Motor Trend and Popular Mechanics tested the earlier 1.2-liter A-Series engine-equipped Metropolitan, and fuel economy was as high as 40 at lower steady speeds and closer to 30 around 60 or 65, so I believe Nate’s fuel economy claims. 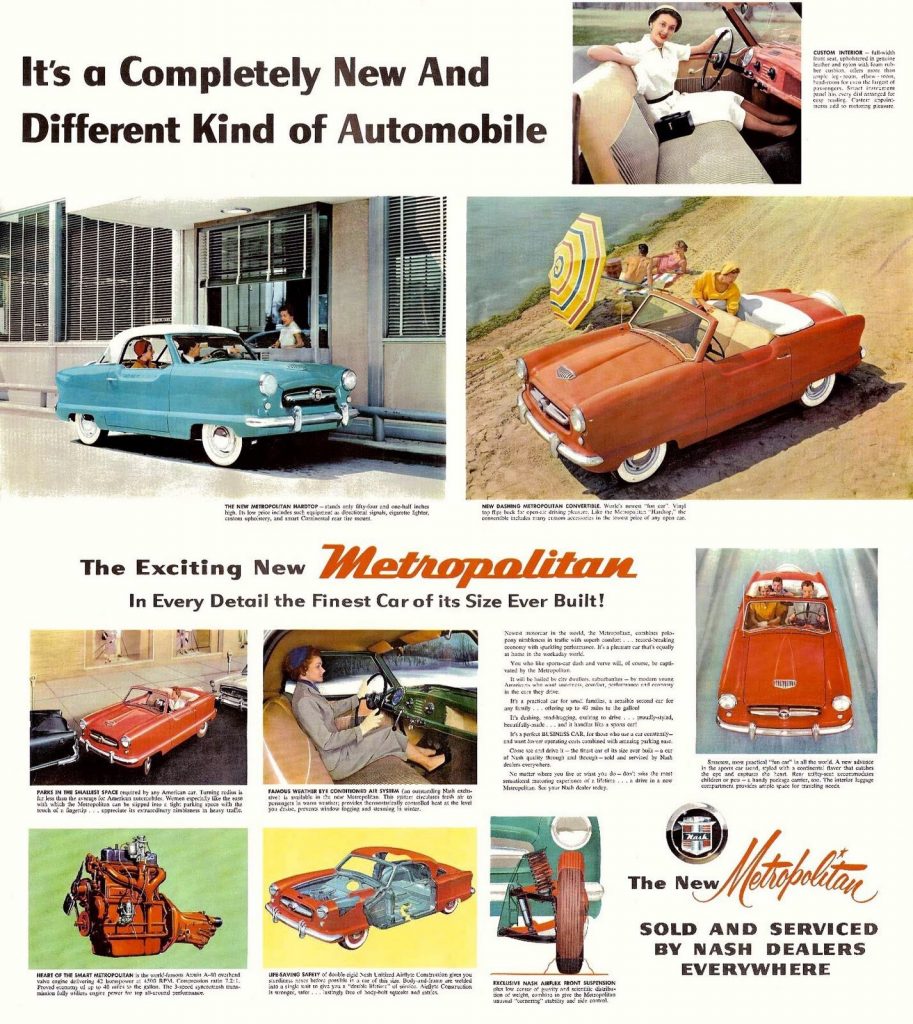 There’s so much more about the unibody Nash Metropolitan that I need to tell you; in many ways, it offered incredible features that you might not have expected in an economy car from the mid 1950s; I’ll get to that later once I actually get to sit in the car and experience its glory. I’m excited.

The move to LA? I can’t say I’m that excited about that. I’m ready to leave Detroit (even though I do love it and its incredible car culture), as it’s been nine years already, my army-brat nature is telling me to move on, and I have no family nearby. But I do have concerns about LA — cost of living, truly accessible car culture, the homeless population (I’m not worried about them, I’m worried for them), the time difference from the east coast, traffic, etc. But the fact is, being close to our west coast team will yield tangible benefits that will help The Autopian grow as a business, and that’s where my head has to be right now. I’m just glad I’ve got a little, moderately-broken 1950s economy car ready to show me around.

Completely unrelated: Does anyone in Michigan have a giant pole barn ideal for storing Jeeps (on the cheap)?

Update: Somehow — and I don’t know how this happened — I only just realized that Nate had, somehow, swapped in an automatic transmission. How that wasn’t clear to me when I bought this is beyond me. Obviously, Nash never offered an auto in a Metropolitan, and swapping one into such a small package seemed very unlikely, but here we are: That’s a PRNDL on the floor. I’m not a fan of automatics, so I’m likely either going to swap this back or have to part ways with it. Bummer! But pretty hilarious that I’m only now learning about it!