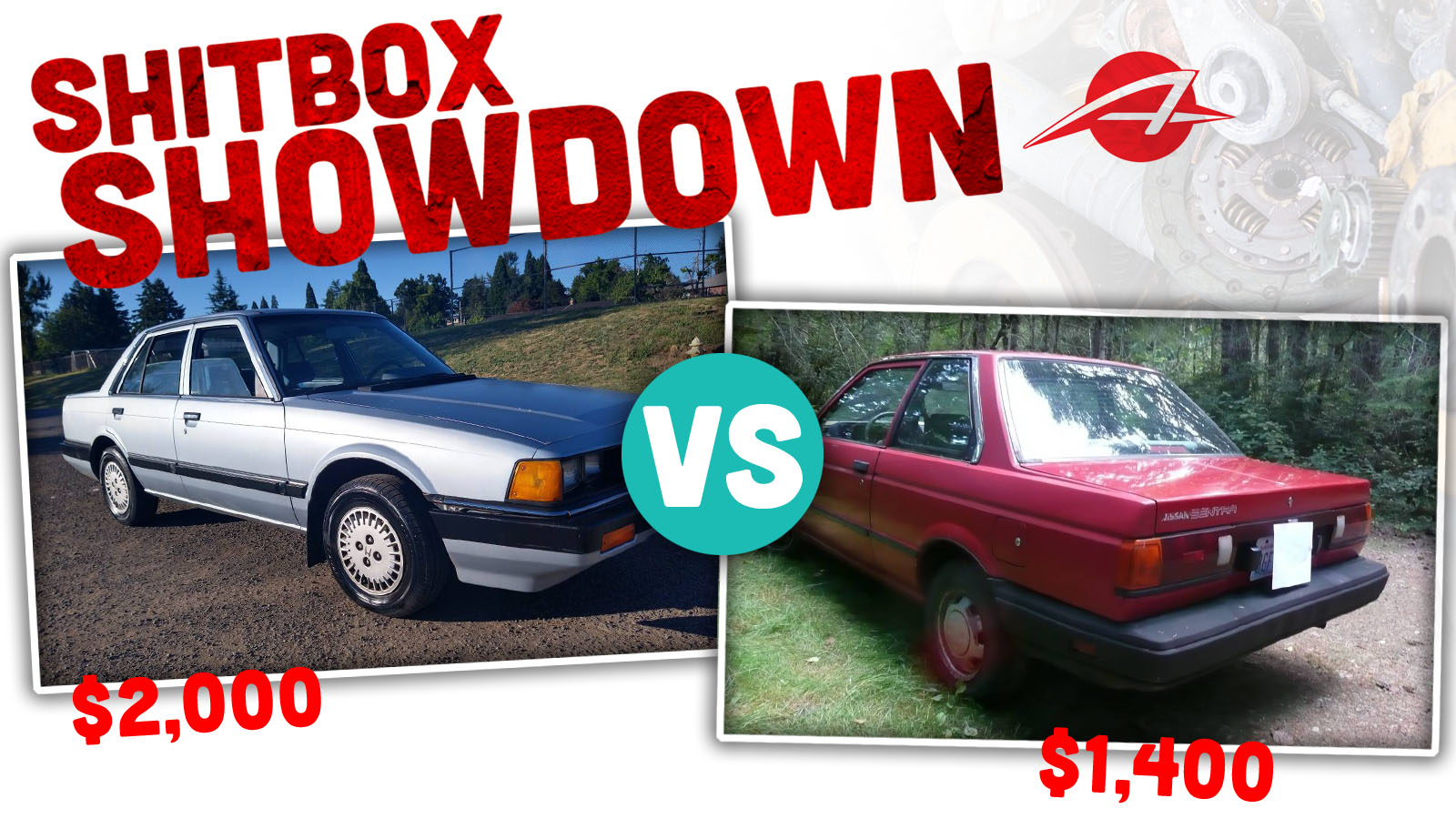 Good morning, and welcome back to another week of cars you’d never buy, but love to make fun of. Today, we’re taking a look at two cars from a styling period that could be best defined as “my six-year-old could draw that.” But before we do, let’s check in on our trucks from Friday:

Looks like a pretty clear win for the Chevy. I imagine the price disparity had a lot to do with that. As of this writing, the Chevy is still cheaper, but catching up: $2,575 to $5,100. Still a hell of a deal.

The longer I write this column, the more I start to figure out what cars are good choices. It’s not always about picking “good” cars; in fact, some of the best discussions we’ve had so far have been about cars that no one in their right mind would buy. (Luckily for the sellers, there are a lot of people who aren’t in their right minds.) But a lot of times, I find one car that catches my eye, and then have to go looking for a mate to it, something with some tie that binds. I’ll leave it to you to speculate on which car was the “seed crystal” for any given day’s choices.

For today’s picks, I went with a pair of Japanese sedans from the 1980s. They’re from different manufacturers, but if you told me they were designed by the same person, I’d believe you. I know a lot of people hate this rectilinear design language that permeated the car market from the late ’70s through the ’80s (my wife is one of them), but I quite like it. It looks clean and sharp to me, especially compared to today’s fussy, oddly-shaped blobs with enormous grilles and wheels and tiny windows. 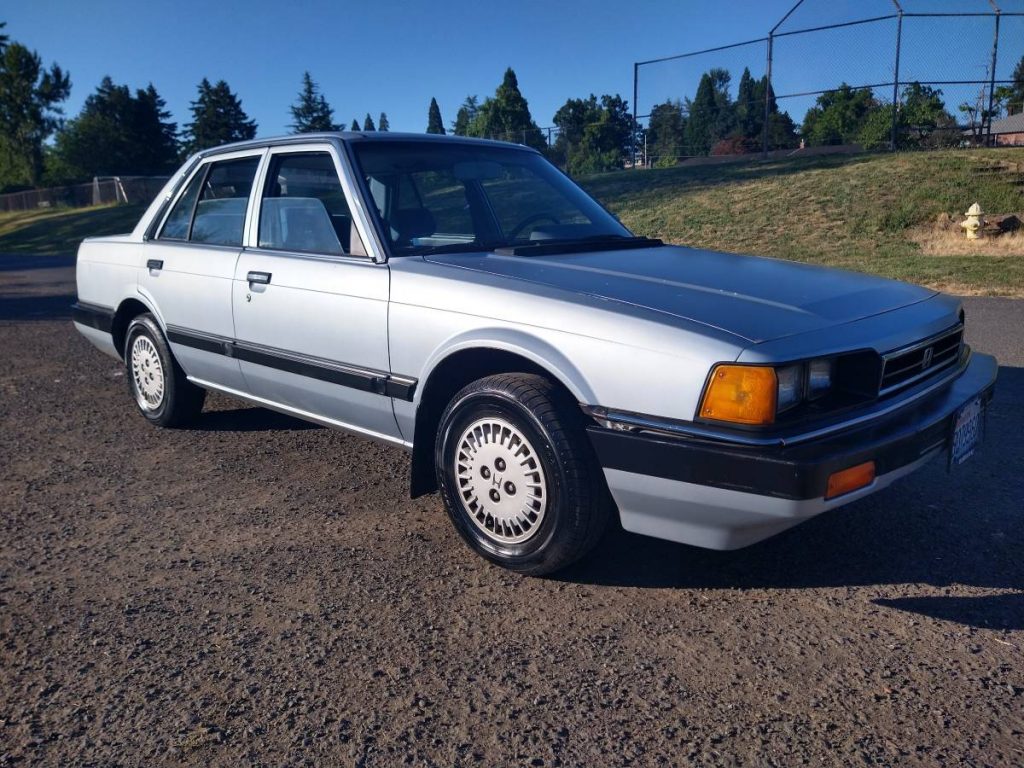 You don’t see very many early Honda Accords these days, and I have first-hand experience as to why. In 1995, I bought an ’84 Accord sedan very smiliar to this, except mine was maroon and had a 5 speed manual. Eleven years old at the time, and it already had gaping rust holes in the rocker panels and jagged edges on the bottoms of the doors. Eventually the brakes went out: a steel brake line under the car rusted through. I took it to a shop to have it fixed, and it was so rusty they couldn’t put it on a lift. I reluctantly junked it. I got a year and change out of it – roughly 20,000 miles – so I got my $800 worth, but it was still frustrating. I really liked that car. 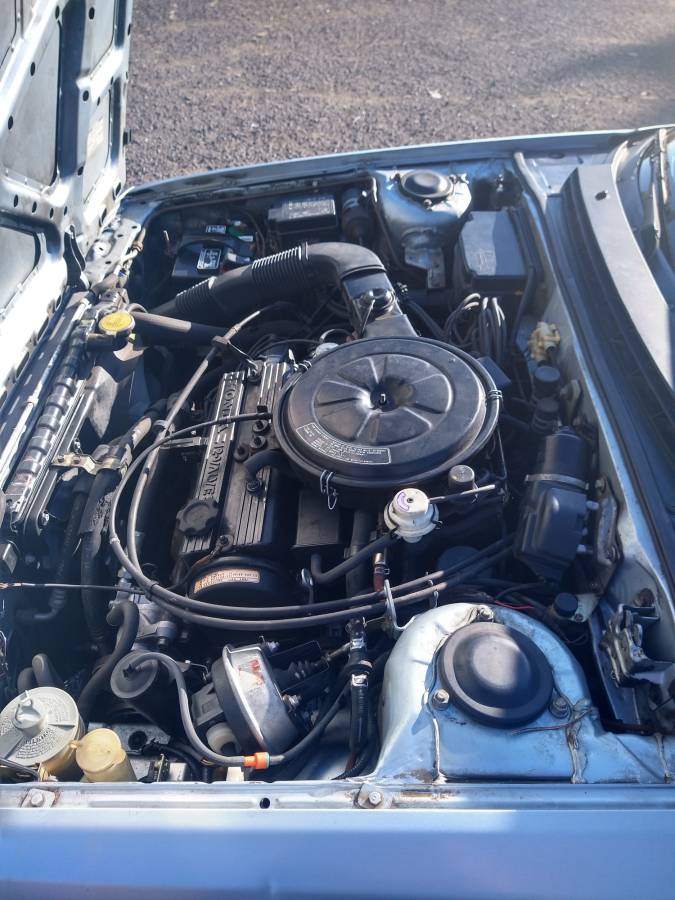 This car features a gem of an engine, Honda’s famous CVCC design, here with 3 valves per cylinder (2 intake and 1 exhaust). In the Prelude, this engine came equipped with two side-draft carburetors, but the Accord made do with a single 3-barrel carb and a little less power. It’s not a powerhouse, but it’s smooth and reliable and willing to rev. The power steering is also noteworthy: it’s variable-assist based on engine speed, and Honda nailed the tuning of it. It’s fingertip-light when parking, but has almost no boost at all at speed, and excellent feel. 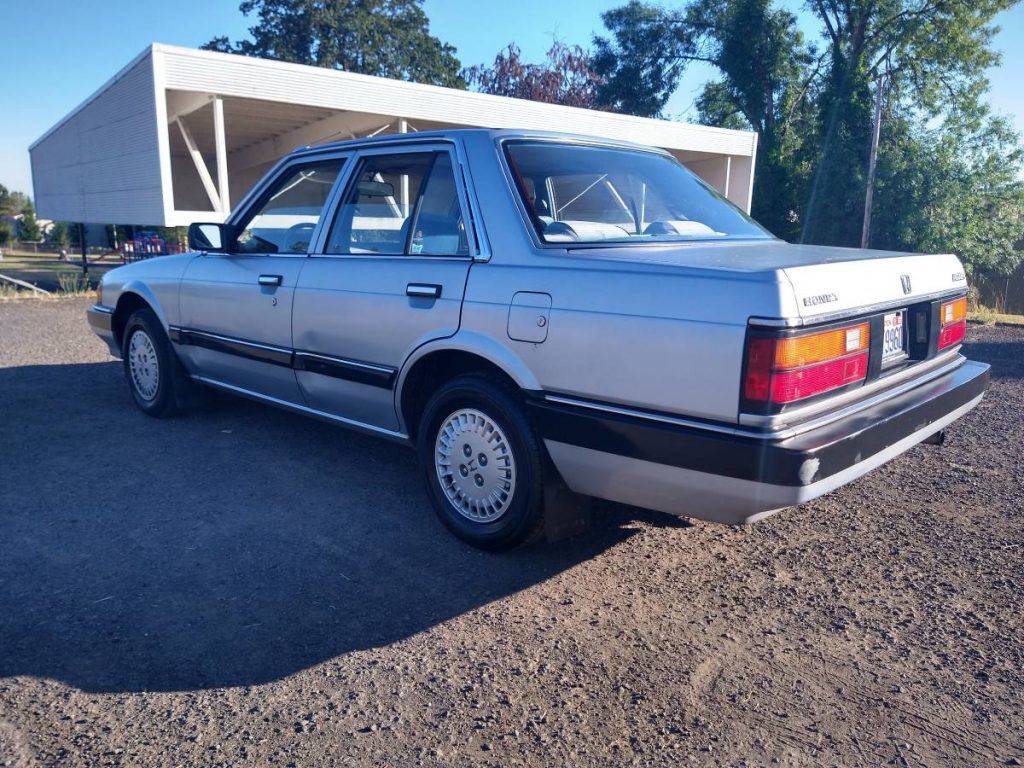 Rust-free though this Accord may be, it’s not perfect. It has some dings and dents, but it’s still the cleanest second-generation Accord I’ve seen for sale in a while. The seller notes a problem with the HVAC controls: it’s stuck on defrost/floor for airflow. It’s a push-button control unit, and I believe it’s electrical rather than vacuum-controlled. It should be fixable, but it will mean tearing apart the dashboard. But hey, if that’s the only thing you have to fix, for $2000, that ain’t bad. 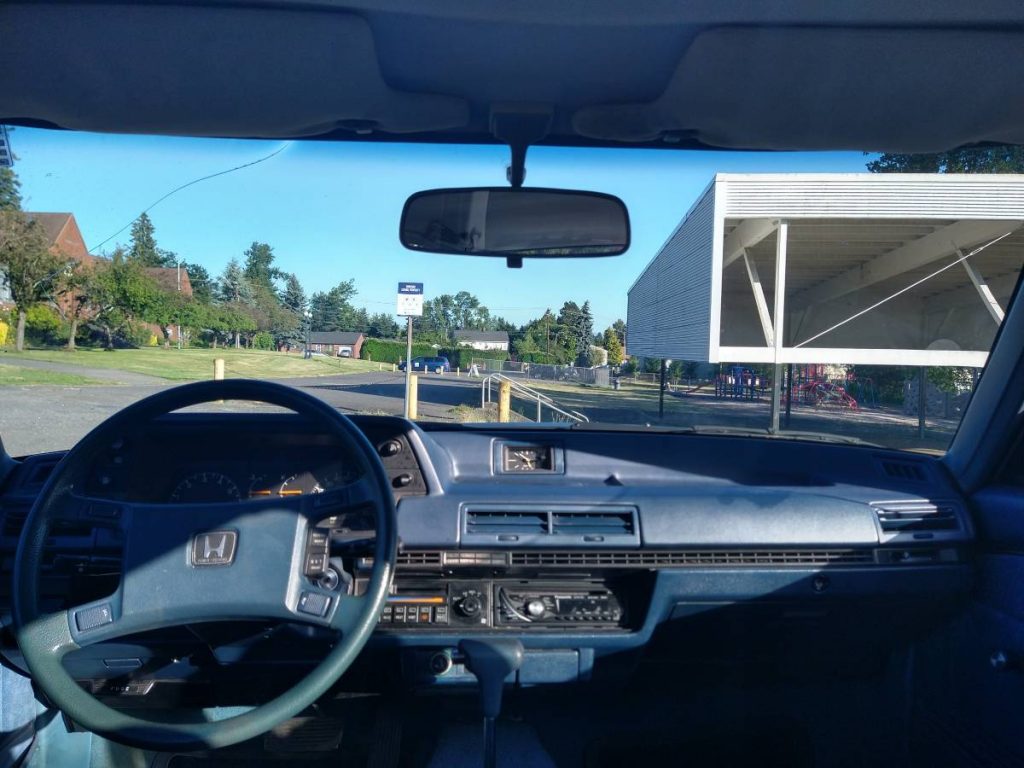 There’s a laundry list of recently-replaced mechanical items in the ad as well. At 181,000 miles, it probably still has plenty of life left in it. 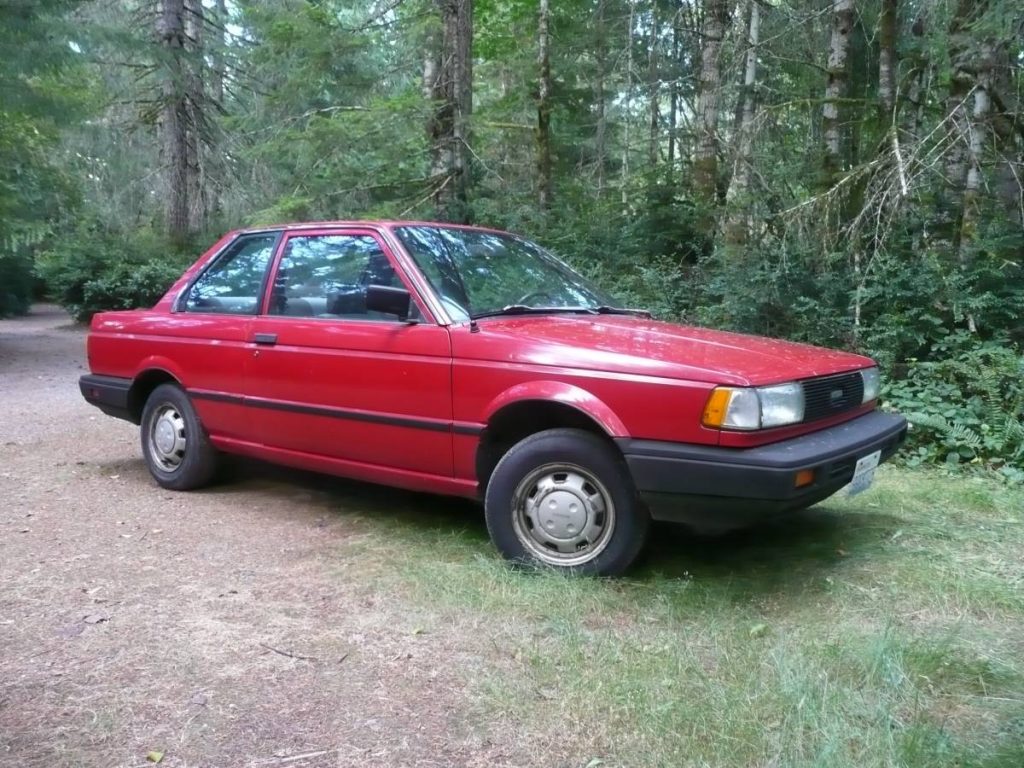 This Sentra is an example of something else I miss: two-door sedans. Not coupes; there was a Sentra coupe, and it was even more angular than this car, and had a lower roofline. This is exactly the same roofline as the four-door sedan. This was common for years and years, and even when this car was built, you could still buy two-door versions of Jettas and BMW 3 series and other cars that were clearly sedan-shaped. Nissan kept doing this throughout this and the next generation of Sentra, but it was among the last. 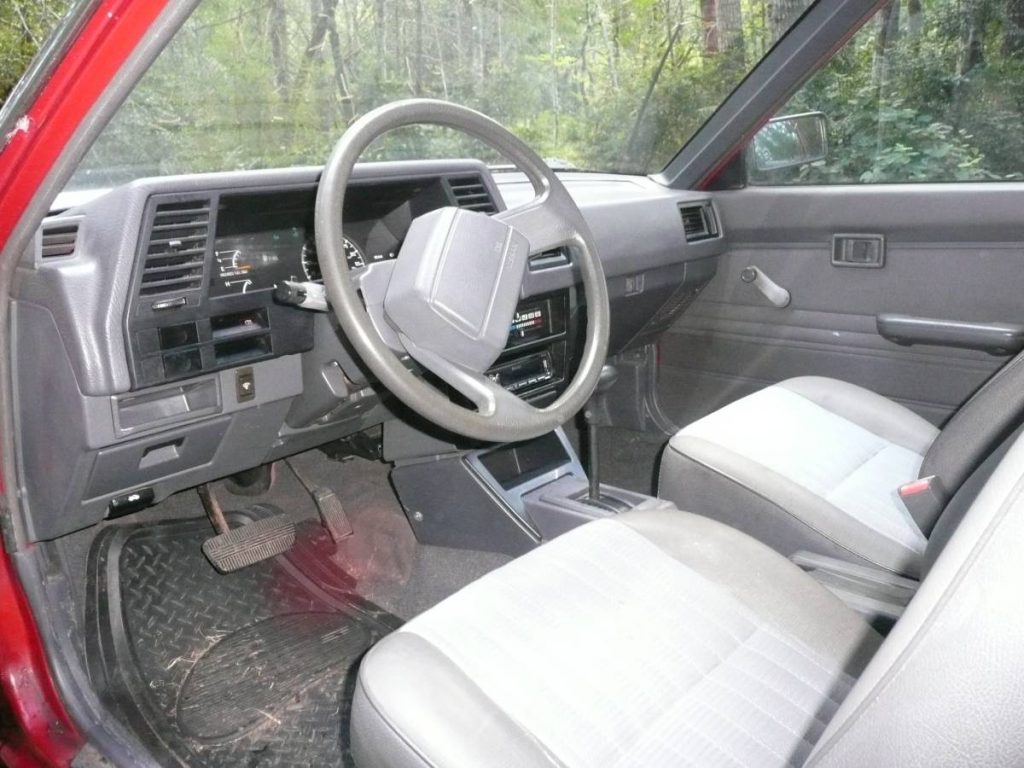 Honestly, I miss interiors like this as well. Everything you need, nothing you don’t, and all made out of sturdy plastic that is unashamed of its working-class roots. Soft-touch? Not here, pal. Alcantara? Never heard of her. And just looking at this photo, I can hear Nissan’s door chime from the ’80s: “dink-donk, dink-donk,” which was an actual bell, by the way, not an electronically-produced sound. 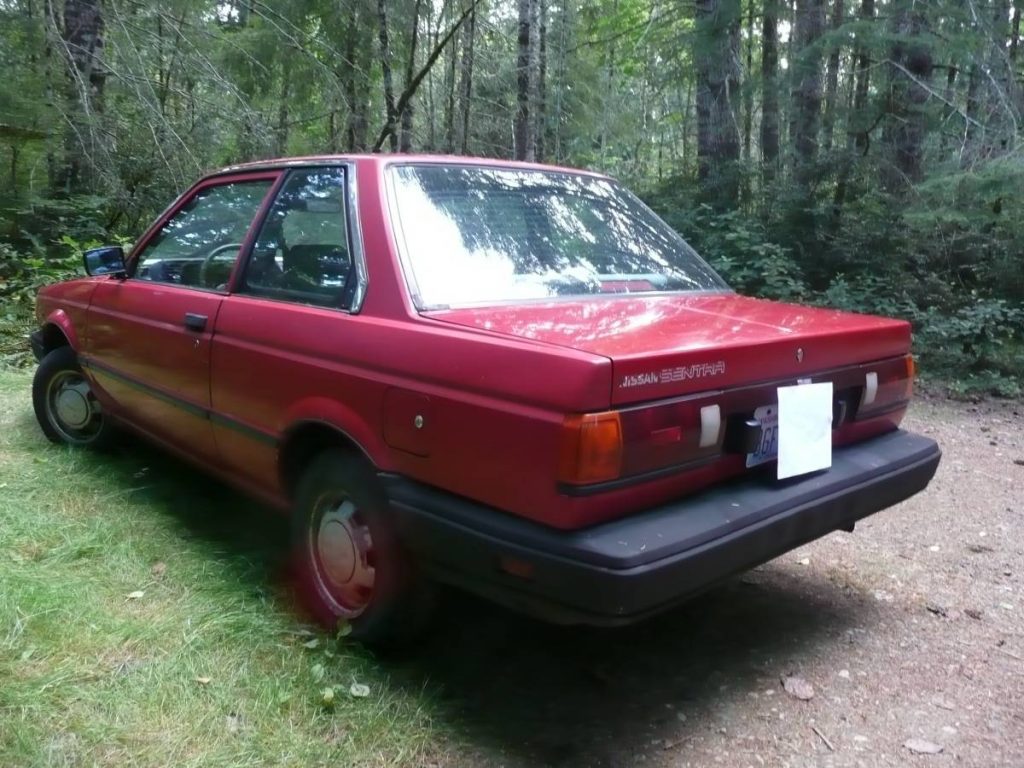 And if I were to wax nostalgic about plain steel thirteen-inch wheels, that would be a bridge too far, wouldn’t it?

This Sentra is said to run well, and has also had a lot of recent maintenance. It needs a couple of broken items replaced, including the passenger-side door handle and the speedometer cable (I think these were still cables in ’89). But it looks pretty sharp for being a 33 year old car. Don’t expect to get anywhere in a hurry, with only 70 horsepower and an automatic, but you should slow down and enjoy the journey more anyway. It’s good for the soul. 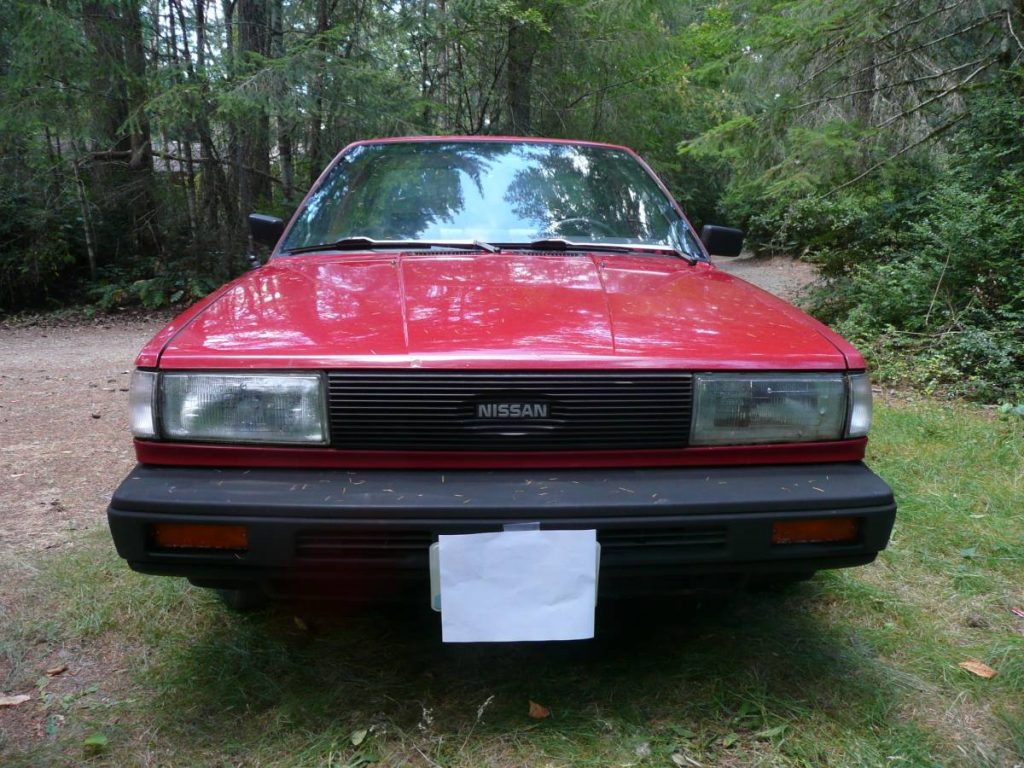 One thing I never could figure out about these Sentras is that oval-shaped recess in the grille where the badge goes. What’s the point? Why an oval? Whose idea was this, and what were they trying to convey? Another mystery lost to the ages.

[Editor’s Note: Before I read the above sentences I thought to myself about how I always liked that odd ovoid depression in the grille around the badge! – JT]

You may not agree with me about this nice clean sharp-edged look and that’s fine. You’re allowed to be wrong. And I know there will be some grousing about the fact that they’re both automatics. I’ll see what I can do to find us some stickshifts tomorrow. For now, these are what we have to work with.