Look At How Much Nicer China’s Nissan Juke Was

Let me start off with an apology here: I am so late to the game on this whole thing, and I don’t have a good reason why. This is hardly a secret, but if it somehow eluded me until I saw this tweet from a friend in China. I suspect that there may be others for whom this fact missed, and I can’t go on in good conscience knowing that I didn’t help to let people know that there was an Infiniti-badged version of the happily goofy Nissan Juke. It was called the Infiniti ESQ and it was only released in China, and I’m now convinced this tarted-up Juke is actually the Juke to have.

Well, I suppose I mean that if you can’t get ahold of one of these Jukes that’s painted just like my ’73 Beetle or the gleefully ridiculous Juke-R, with the drivetrain from the GT-R. But still, other than that, this improbable Infiniti-badged Juke has really captured my attention, mostly because of the inherent strangeness of the Juke’s design coupled with the fact that taking any lower-end-of-the-market car and dressing it up as a luxury brand is always appealing to me.

Mechanically, there wasn’t anything really that interesting about the first-gen Juke; it was based on the same Nissan B subcompact, cheap-car platform as the Nissan Cube or Micra or Versa Note. It was the styling that made the Juke notable, because it wasn’t like every other small crossover out there. It was a little weird, not exactly attractive, but by no means boring.

It was based on a 2009 Nissan concept called the Qazana, a car that, when seen, would make you do that old movie gag of looking at whatever you were drinking with concern before flinging the contents of your glass into a nearby shrub. See: 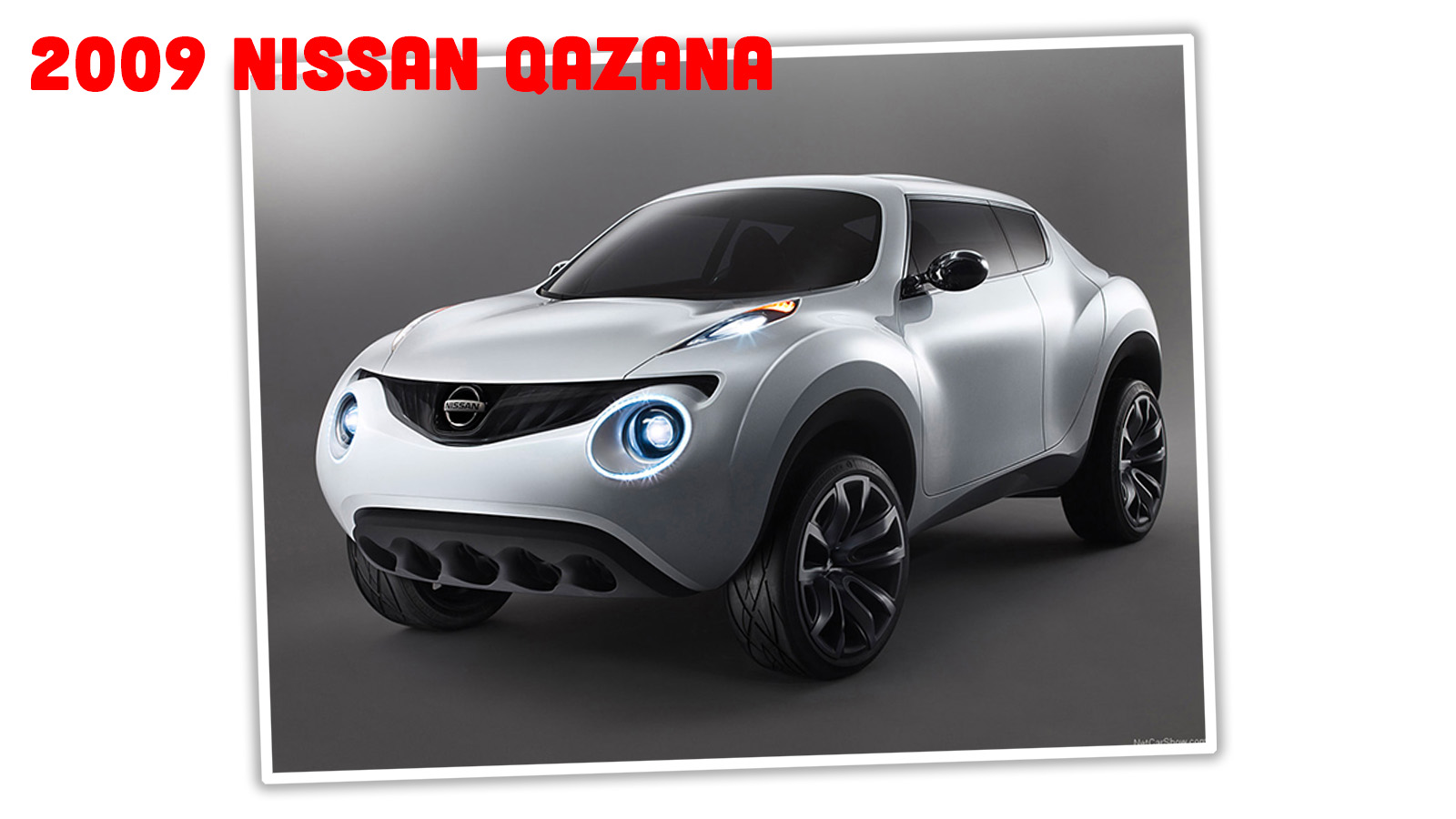 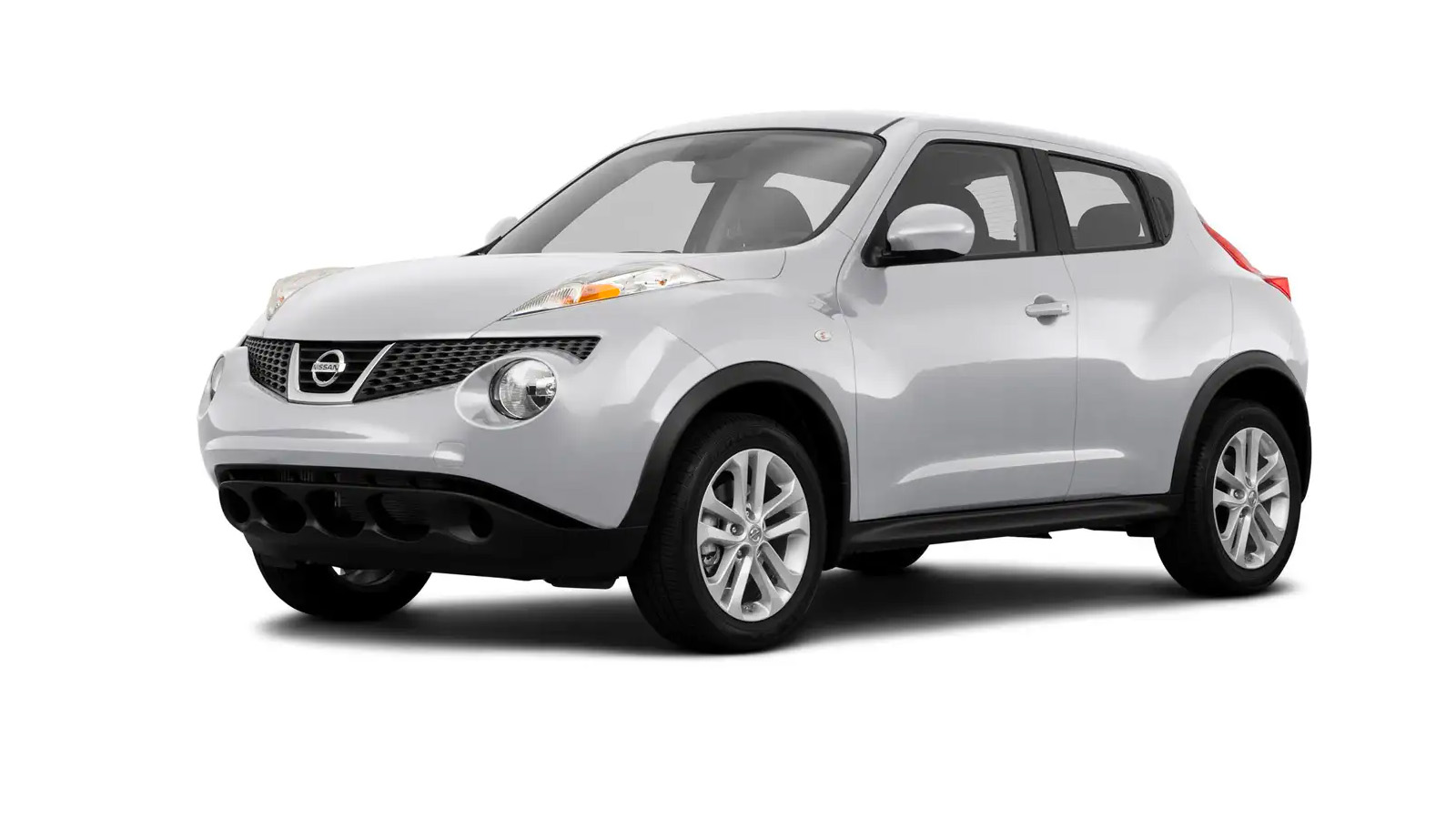 The one thing I didn’t expect anyone would be clamoring for, though, is an upmarket Juke, but it seems 2014 China had different thoughts, and the Infiniti ESQ was born. Significantly, 2014 was when the Juke got a facelift, so it seems like the ESQ may have been a way to get some new life out of the sheetmetal that the Juke molted. 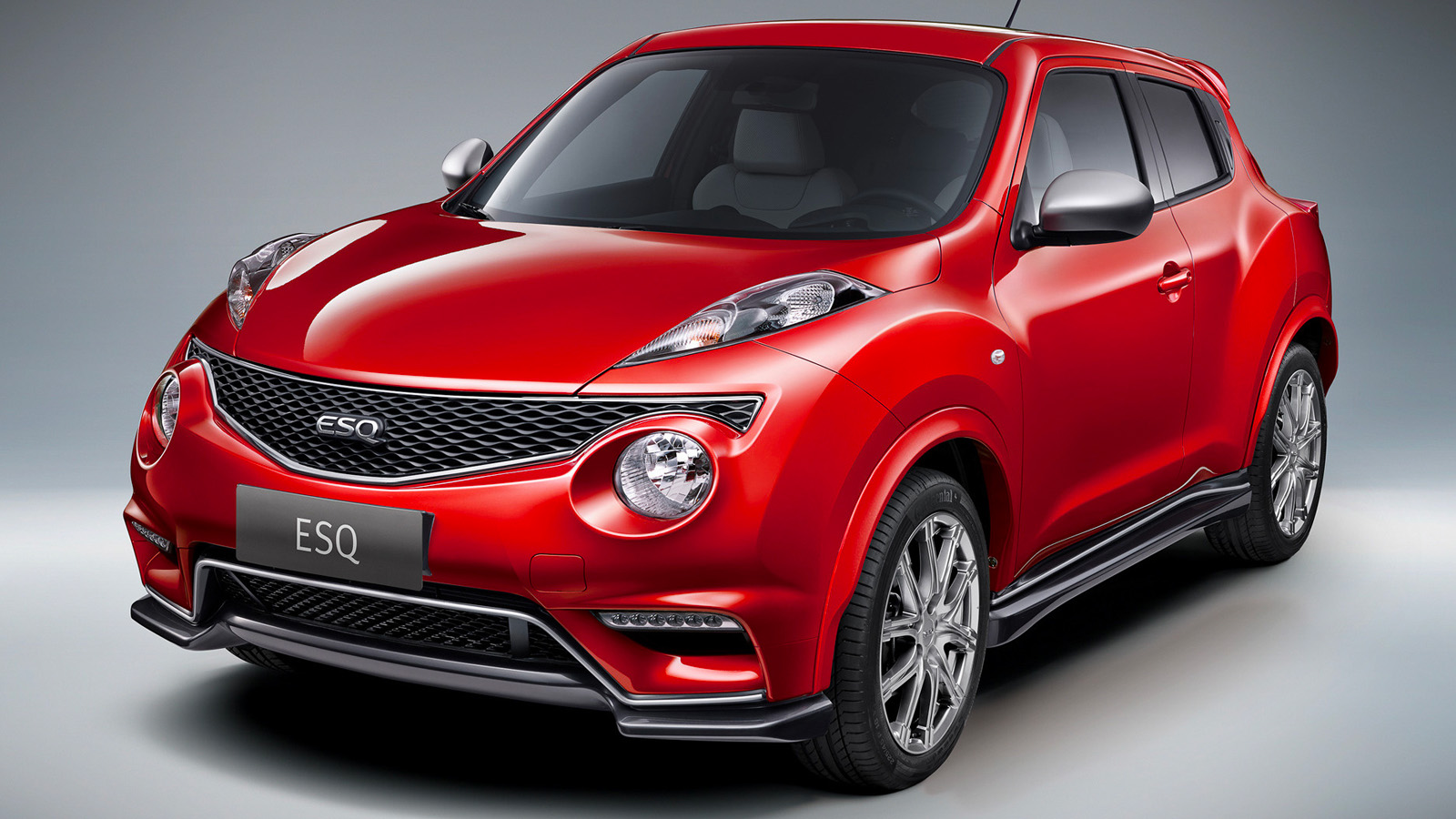 Incredibly, I think this date-night Juke is significantly better, visually. Gone is the worst visual detail of the Juke, that awkward flat-bottom chrome V-shape Nissan was insisting on slapping onto every single car’s grille, replaced with a smiley full-width crosshatch-pattern griller. The lower air dam area is no longer a cheap-looking sea of black plastic, and the fender flares are now even more flare-y and body-colored. There’s LED driving lamps and some tasteful chrome trim and the whole thing looks a little cleaner and a little classier. 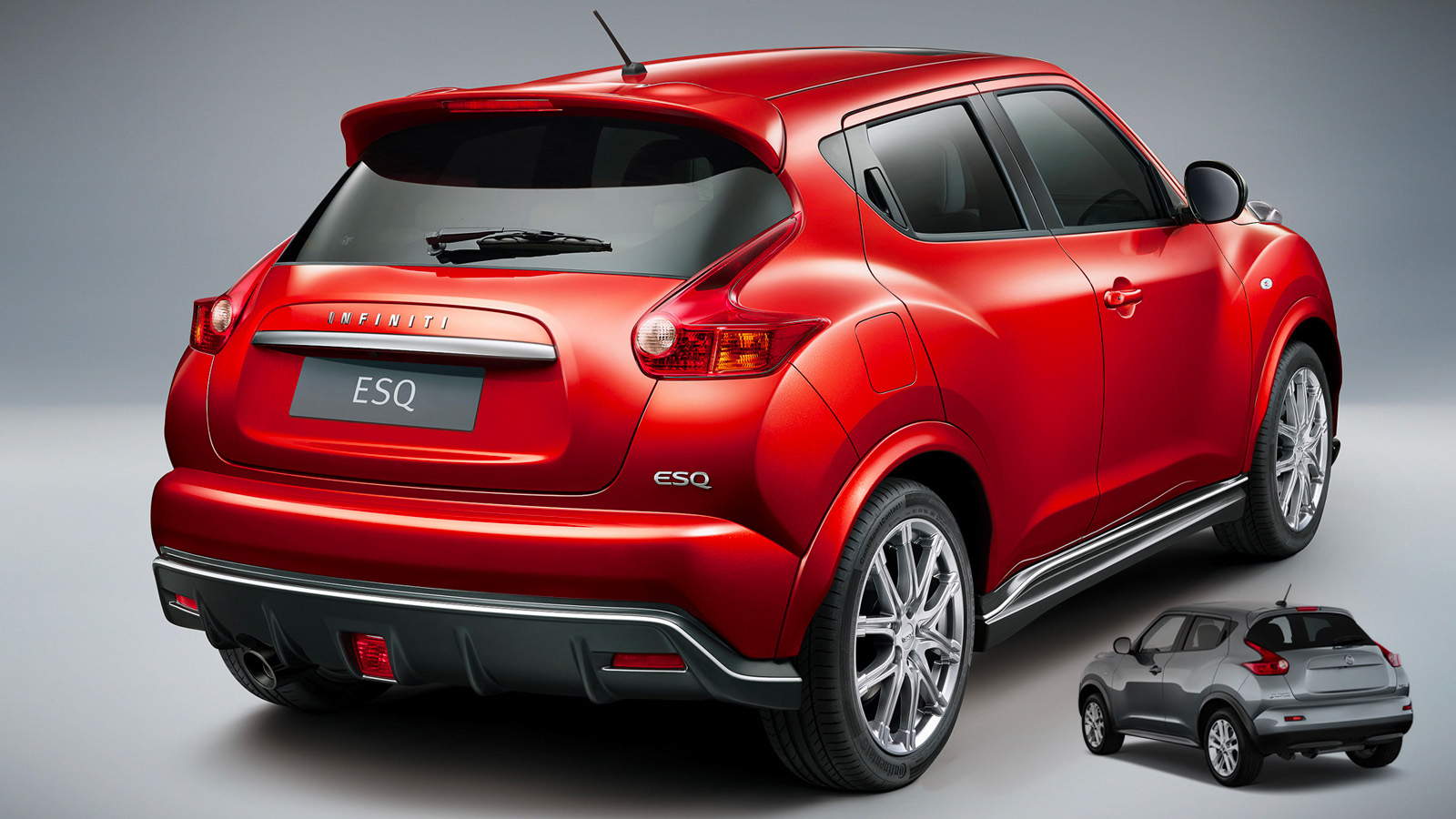 Around back it’s basically the same thing: a bit of extra brightwork, a center rear foglamp into a nicer rear lower bumper area, and those classy I N F I N I T I chrome letters on the tailgate. Just a few touches. 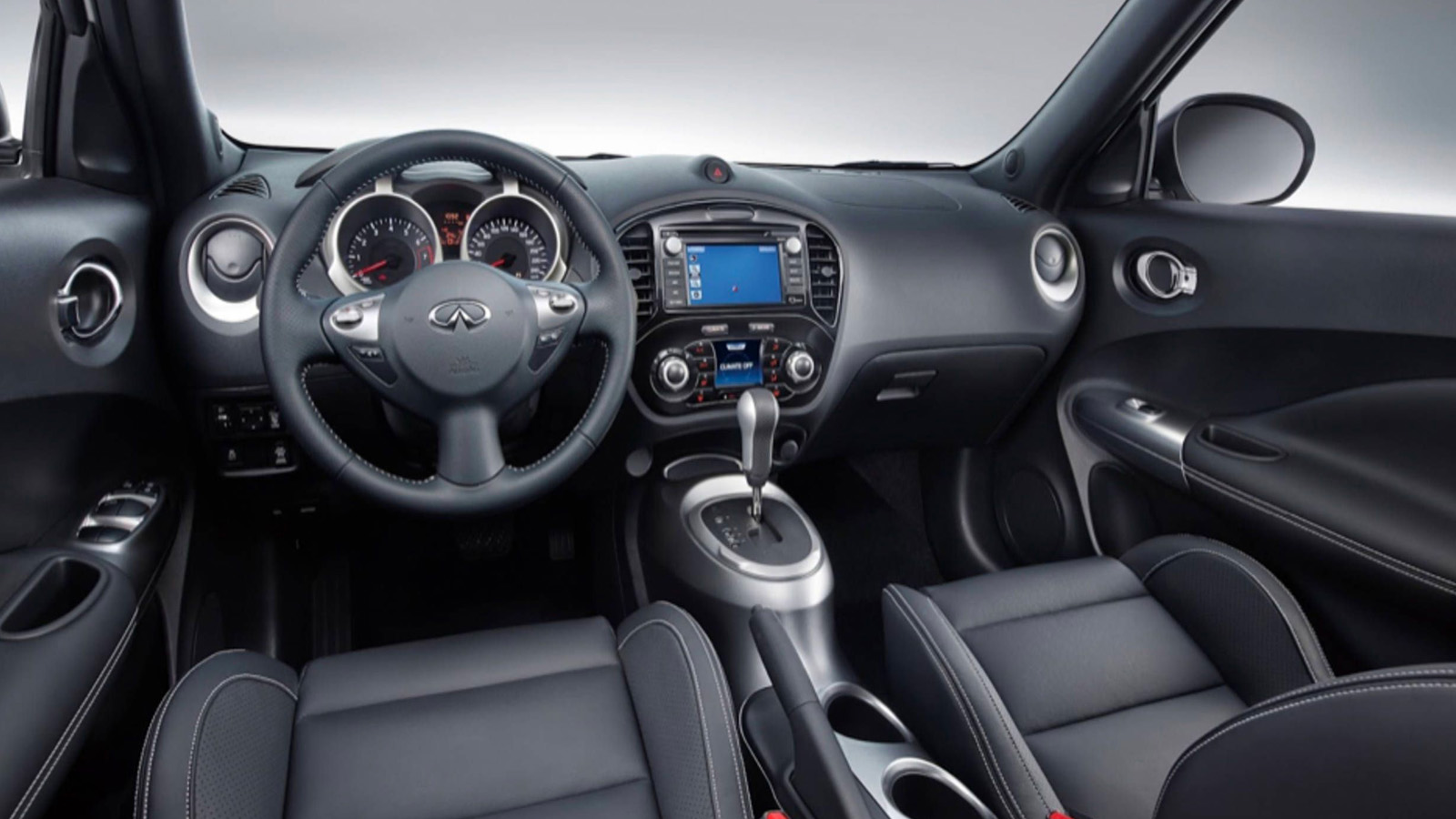 The interior was a bit upgraded, but not dramatically upgraded, but I suppose enough to make you remember you were in an Infititi, at least as long as you didn’t have a Juke next to you to compare.

The ESQ was at least based on the Juke Nismo, which had a 1.6-liter engine tuned to 197 horsepower and upgraded suspension bits. The performance aspects and the inherent weirdness aspects seem to be key to how the car was marketed, if this Chinese-market ad is any indicator:

So, the ESQ, with help from some little UFO spherical things, gives you sexy alien body and face tattoos or lets you grow copper feathers or leaves? And then you get to tear ass around backroads until you get to a remote warehouse? Okay, sure, why, not, no one else was targeting this specific market, so have at it, Infiniti.

All told, the changes are fairly minor. It’s a mildly re-styled Juke. It sort of reminds me of a car on the more exciting end of a really specific spectrum: the fancied-up cheap car spectrum, with the boring end being anchored by the Cadillac Cimmaron:

Anyway, I just wanted to be sure everyone was aware this thing – did the ever call it the “Esquire?” – existed. Also, if you have a first-gen Juke here in the US, I’d strongly encourage you to order an ESQ grille, bumper, badging, and whatever else you can to re-badge your goofy Nissan Juke as a classy-ass alien-attracting Infiniti ESQ. You’ll be happier.

I'm a co-founder of the Autopian, the site you're on RIGHT NOW! I'm here to talk to you about taillights until you cry and beg me to stop, which I absolutely will not. Sorry. Hug? Also, David's friend.
Read All My Posts »
PrevPreviousI Accidentally Turned My Car Interior Into A Toxic Mold Disaster. Here’s How It’s Going Months After I Cleaned It
NextThe Last Pontiac Ever Built Ended Up In A Museum. And By Museum I Mean An Insurance AuctionNext