At the bottom of Los Angeles’s Baxter Street, a Tesla Model S flashes its brights. It zooms up the hill towards a group of people tracking it with cell phones held at arms’ length. As the Model S reaches the top it takes flight like a hurled brick, clearing the hill’s peak and falling down the other side until the car’s nose plows into the ground in a hail of sparks.

[Remember this video? It was absolutely everywhere the week before we launched The Autopian. Every site was mostly just holy-crapping the whole thing, gawking at that heavy-ass Tesla swan-diving into the pavement, sending trash cans flying and trashing that poor bastard’s Subaru. But we wanted to know why. What is it about this hill and this car that made for such an astoundingly dramatic jump? What’s going on here? Why did this happen? So we reached out to a real physicist, and now you’ll have the answers you deserve. –JT]

Hi, I’m Stephen Granade. I’ve been fielding Jason Torchinsky’s bonkers physics questions about cars for years. And I’m so glad I get to do it again for The Autopian.

It’s remarkable to see that Model S catch air because it’s a chonker of a car. It weighs in at almost 5,000 pounds or, to use more scientific units, two 2007 Honda Fits. Thanks to its battery pack, its center of gravity is low and near the middle. In fact, it’s a touch tail-heavy, with 52% of its weight in the back. How does a car that heavy get off the ground in the first place and, with a heavier tail, go nose-down during its ignominious flight?

Lucky for us, physics can help answer those questions. Let’s look at the forces on a car that keep it on the road. There’s gravity, of course, and there’s downforce from the air rushing over the body, push the car down. In response, the road pushes up on the car’s tires to keep the car from sinking into the Earth. I’m going to ignore downforce because figuring that out without an air tunnel or a good complex fluid dynamics simulation is hard, and I’m lazy. I feel pretty good about that decision. The Tesla’s optimized for long range, which led designers to limit downforce due to it adding drag. The car in the video was also going relatively slowly. Downforce scales as the square of the velocity. If you double your speed, you quadruple the drag. At the Tesla’s relatively low speed up the hill, the force of gravity will dominate.

I can visualize the forces acting on the car by drawing arrows where they’re applied. Gravity effectively pulls at the car’s center of gravity, while the road pushes up on the tires. By the way, I learned how to make these drawings in my physics class on Statics, which is like a kindergarten drawing class but with math. 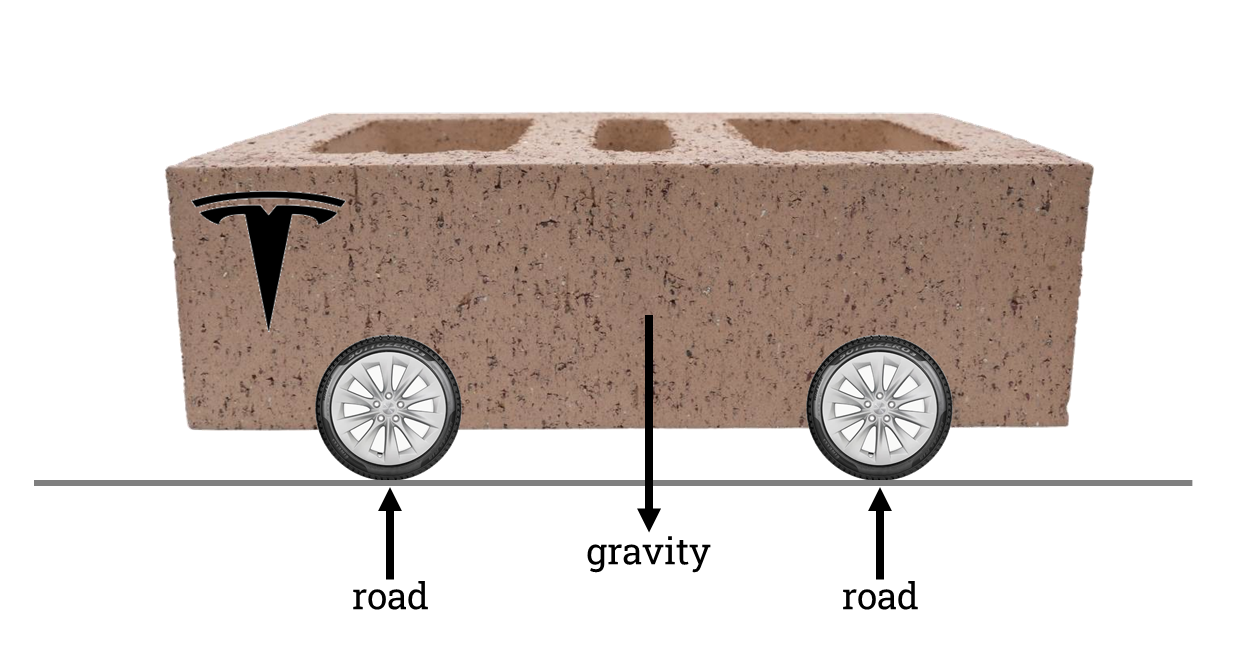 The diagram [don’t get worked up, it’ll be explained why it’s a brick soon — JT] changes when you’re on a hill like the one on Baxter street. Gravity still pulls straight down, but now the road pushes against the tires at a slant. Only the part of the gravitational force that points towards the hill keeps the car on the hill. The other part of it wants to drag the car back. 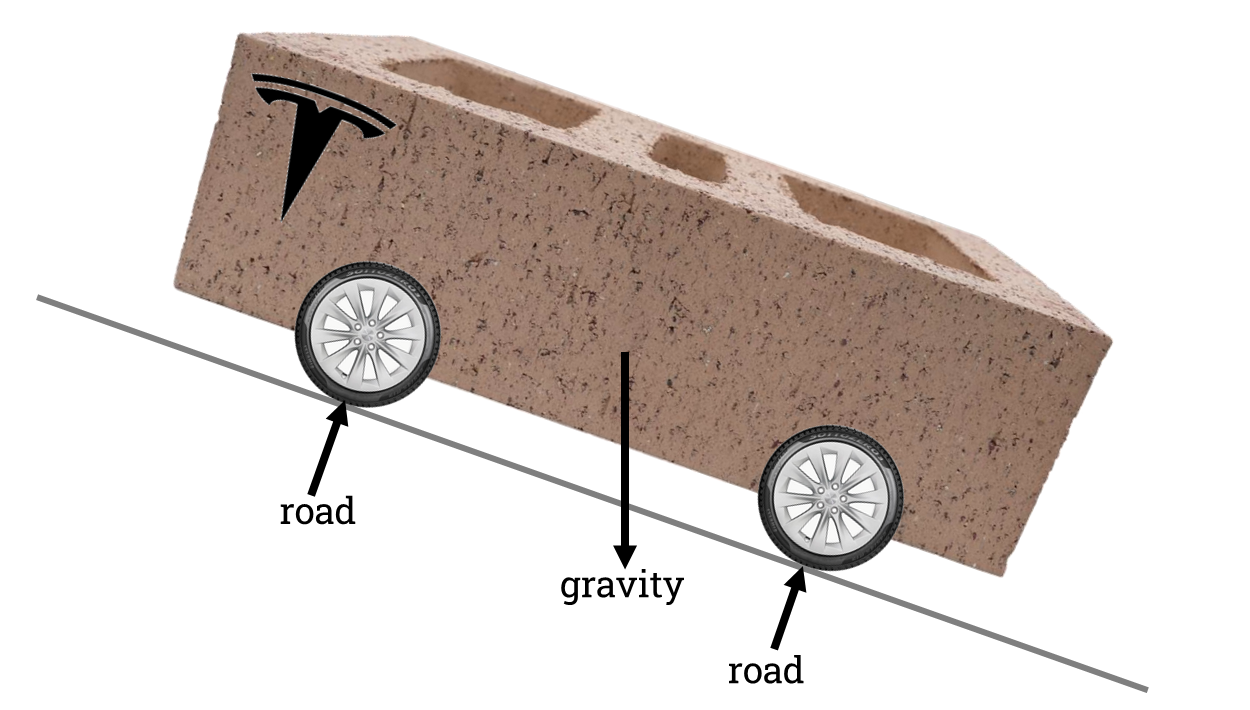 The hill on Baxter is ridiculously steep. It’s so steep that a few years ago, tired of cars getting stuck or sliding back down it, Los Angeles made it one way in both directions from the hilltop. It’s a 32% grade, which means that it’s at an angle of nearly 18 degrees. The Google Street View from the top shows how steep it is. But the steepness alone isn’t why the car went flying. The hill’s rounded top is what sealed the deal.

Check out that street view again. The top is narrow (i.e. it has a sharp peak), about 20 feet wide, and slightly rounded. It’s so narrow and rounded that buses and limos used to get stuck on it. As the Tesla reached the top, the hill curved down beneath the Tesla faster than the Tesla could follow it.

Now we get to talk about Dynamics — the other half of my kindergarten-drawings-plus-math class. As the hill curved over, the Tesla wanted to keep going in a straight line because of its inertia. The force between the ground and front tires dropped as the nose rose relative to the curving hill. When that happened, the force of gravity produced a torque around the back tires to bring the nose back down and keep the front tires on the ground. That torque equaled the force, which is the car’s mass times the acceleration due to Earth’s gravity, multiplied by the moment arm, which is the perpendicular distance from the force to the point the car’s rotating around. 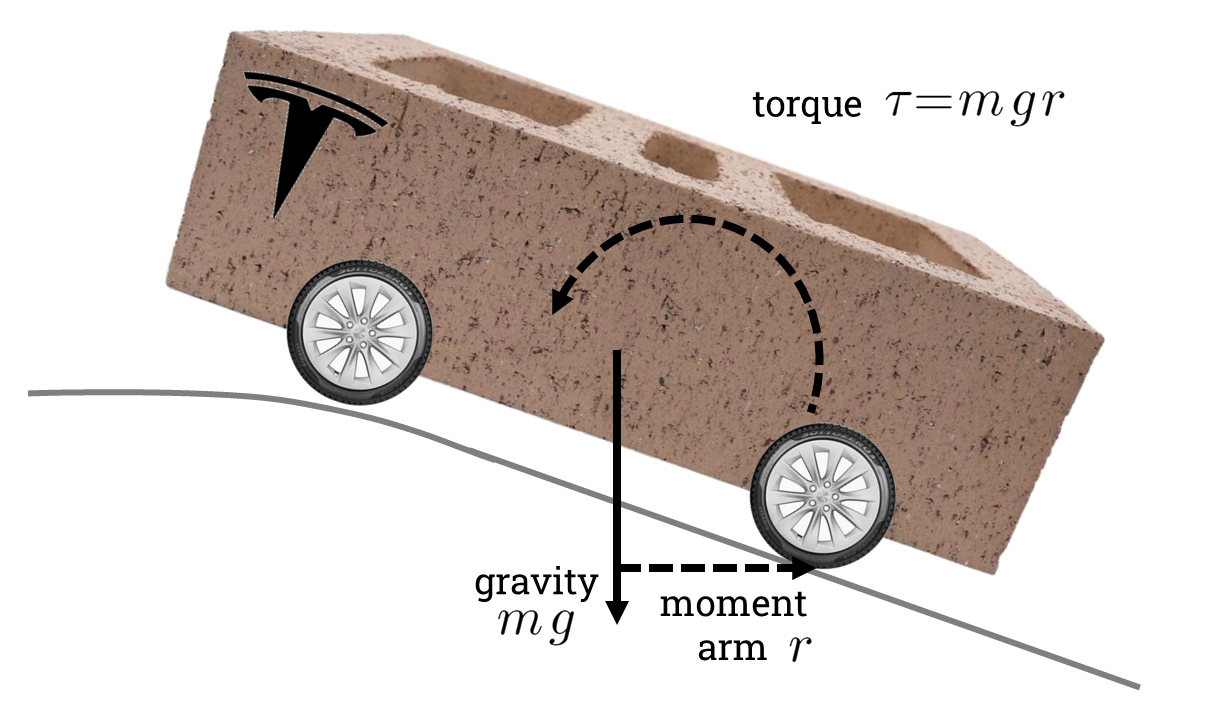 The moment of inertia depends on how mass is distributed across an object. Figuring it out exactly is hard, but since the Tesla has a heavy undercarriage and is square-ish, I can get close by using the moment of inertia of a brick. (See? There’s more than one reason I called the Tesla a brick). The brick Tesla’s moment of inertia, “I,” is proportional to the mass times its length squared plus height squared. 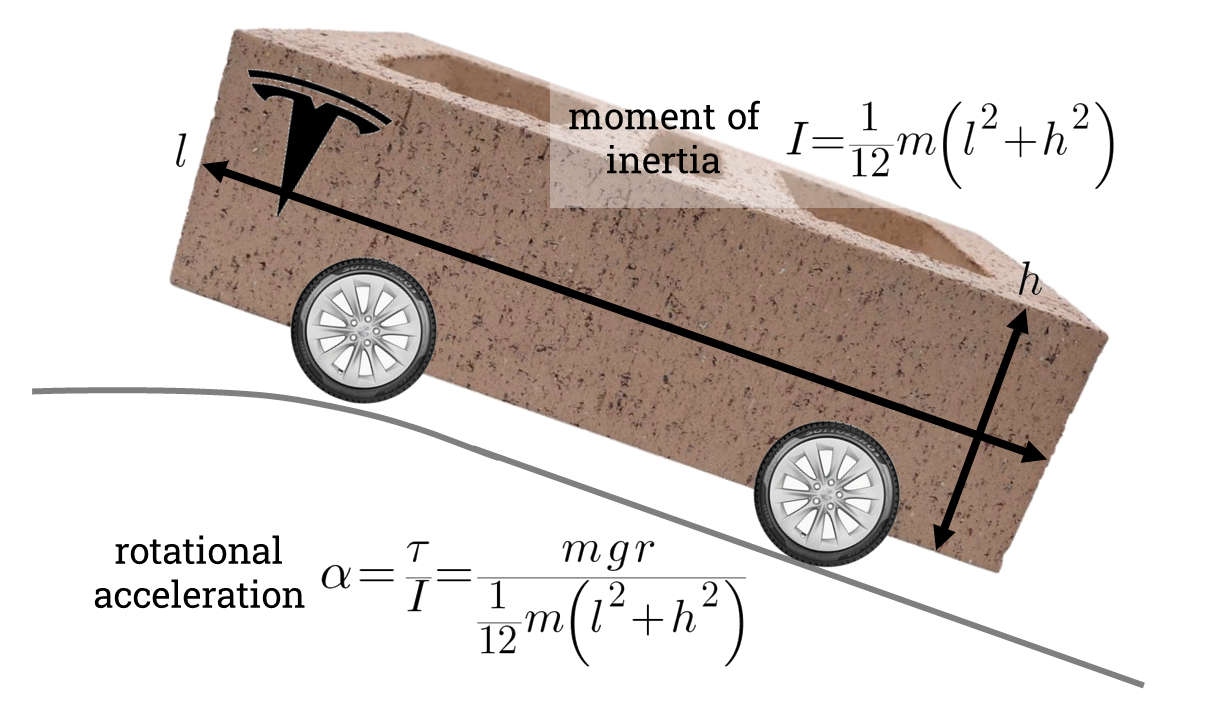 In the rotational acceleration equation above, the moment of inertia depends on the car’s mass, but so does the torque, since the force due to gravity (mass times linear acceleration) is causing the torque. In the arithmetic, the masses cancel out, so clearly it didn’t matter that the Tesla Model S is a heavy car. What mattered was that the Tesla was traveling fast enough that the torque couldn’t rotate the car quickly enough to keep its front tires on the ground.

That helps explain why it could go airborne, but what about it pitching nose first? Again, it’s because of the torque. Even after the front tires left the ground, gravity kept torquing the car around its back wheels, rotating the car forward, its nose going down. When the back tires left the ground, however, that torque stopped. Gravity stopped torquing the car and instead pulled it inexorably down the other side of the hill to its spark-filled crash. Without that torque, the Tesla kept the rotational speed it had when it took flight (i.e. the nose dropped at a constant rate after flight). That’s the conservation of angular momentum. 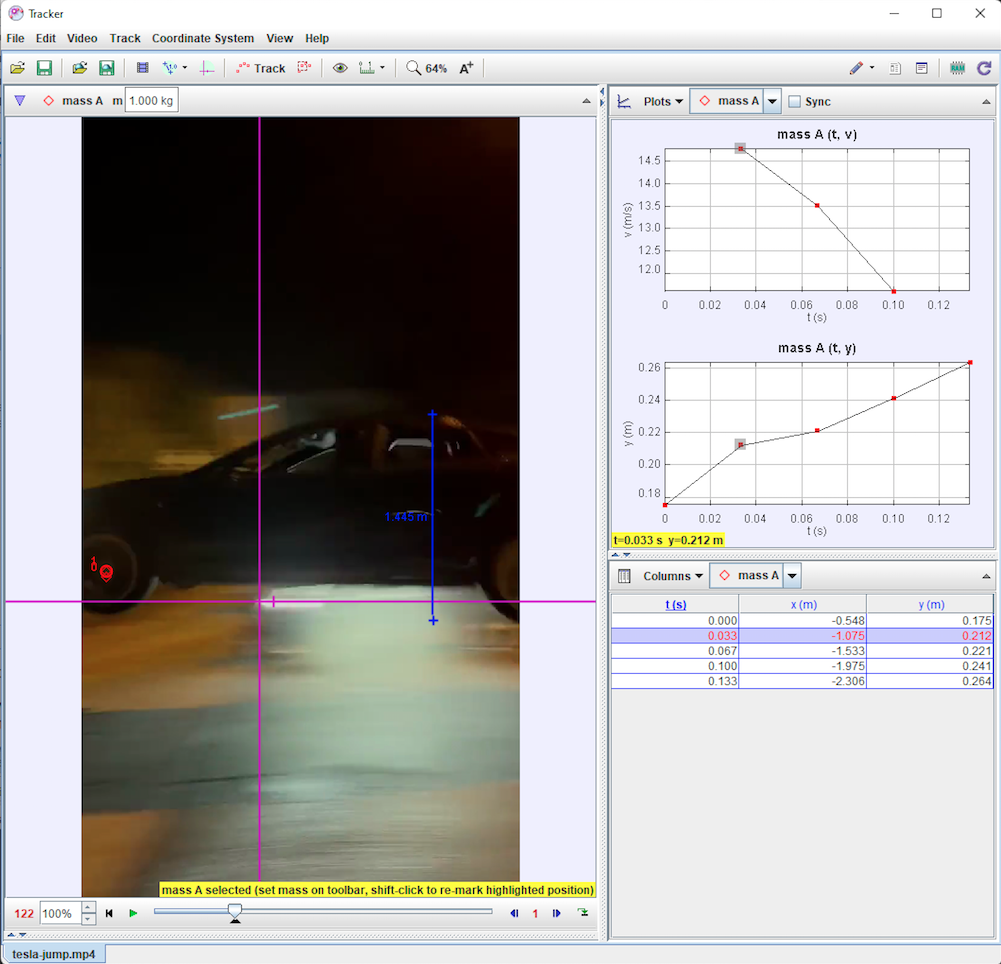 I estimated the car’s speed with video analysis software. It flew over the hill at nearly 14 m/s, or 30 MPH. For 0.2 seconds, the car’s back wheels were still on the ground before they, too, went airborne.

I crunched the numbers and estimate that gravity pulling the nose down over the hill crest rotationally accelerated the car at 200 degrees per second squared. That’s a lot, but the car was moving so fast that even that rate of rotational acceleration couldn’t keep the car’s wheels on the road. By the time the back wheels left the ground, the car was rotating at 37 degrees per second. If it started at the hill’s angle of 17.74 degrees, it should have been level 0.5 seconds after the front wheels first left the road.

I double-checked the video. The Tesla levels out a half a second after the front tires leave the ground. Not bad, especially given the approximations I made.

From there, things got worse for the Tesla. As it pitched forward, the air no longer hit the nose of the car and glided smoothly over it. Instead, it smacked into the windshield. It’s like the driver popped a windsail. At first that would have slowed the Tesla’s rotation, but if the Tesla had a long enough flight, it would have sped up the rotation once the nose was low enough.

I got curious to see if you could stop the spin by stomping on the accelerator. Because angular momentum is conserved, making the car wheels spin forward faster would make the car itself rotate backwards to compensate. Tesla’s slipstream wheels are 13 kilograms. If the car was going 30 MPH, and then you spun the wheels fast enough to move the car at the 2018 Model S’s top speed of around 140 MPH, then the wheels’ angular momentum would increase to 1,063 kilogram meters squared per second. (When we talk about rotational motion, the units look squirrely. Just go with them.). That would make the 2200 kilogram Tesla rotate backwards by 9 degrees per second. Given that it’s rotating forward at 37 degrees per second, shaving 9 degrees per second off of that won’t save the driver.

For my analysis, I simplified by assuming that the car wasn’t accelerating or decelerating when it went airborne. If it had been, that would have introduced a force at the back axles which would have made the car’s nose-down rotation less (if accelerating) or more (if decelerating). Even if the driver had stomped on the accelerator right before the jump, the Tesla’s 0-60 MPH time matches an average acceleration of 9 m/s^2. That’s comparable to gravity, but that force’s moment arm around the bottom of the tire would be around 0.2m, compared to gravity’s moment arm of 1.26m. And that’s assuming the driver floored it at the last second before going airborne.