I know it tends to get eye-rolls from a lot of design snobs, but I appreciate a good retro-update design. When done well, the translation of a fundamental design from one era into the vocabulary of another can deliver some striking and memorable results. Think about the Volkswagen New Beetle or the third-gen (2008 and up) Dodge Challenger, or the modern Fiat 500s, and so on. The now-BMW-owned Mini got a modernization in 2001, and while I genuinely like the new Mini, there’s a huge conceptual design problem, and I think it’s time to address that.

If you’re somehow unaware of the original Morris/Austin Mini and its legacy, you’re lucky that I like talking about it, so prepare yourself for a vigorous synopsizing: After WWII, there was a real need in Britain for a good, cheap, fuel-efficient people’s car, pretty much the exact same motivation that birthed the Volkswagen Beetle in Germany, the Citroën 2CV in France, and the Fiat 500 in Italy. The Suez oil crisis of 1956 hit Europe hard, and this really emphasized the need for small, fuel-efficient cars in the UK.

Though small “bubble cars” with incredible fuel efficiency like the BMW Isetta and Messerschmitt KR250 were available, British Motor Corporation (BMC) head Leonard Lord hated them, and wanted to “drive them off the streets by designing a proper small car.” That’s what the missive was to the lead engineer of the project, the brilliant Alec Issigonis, and the result was the Mini. 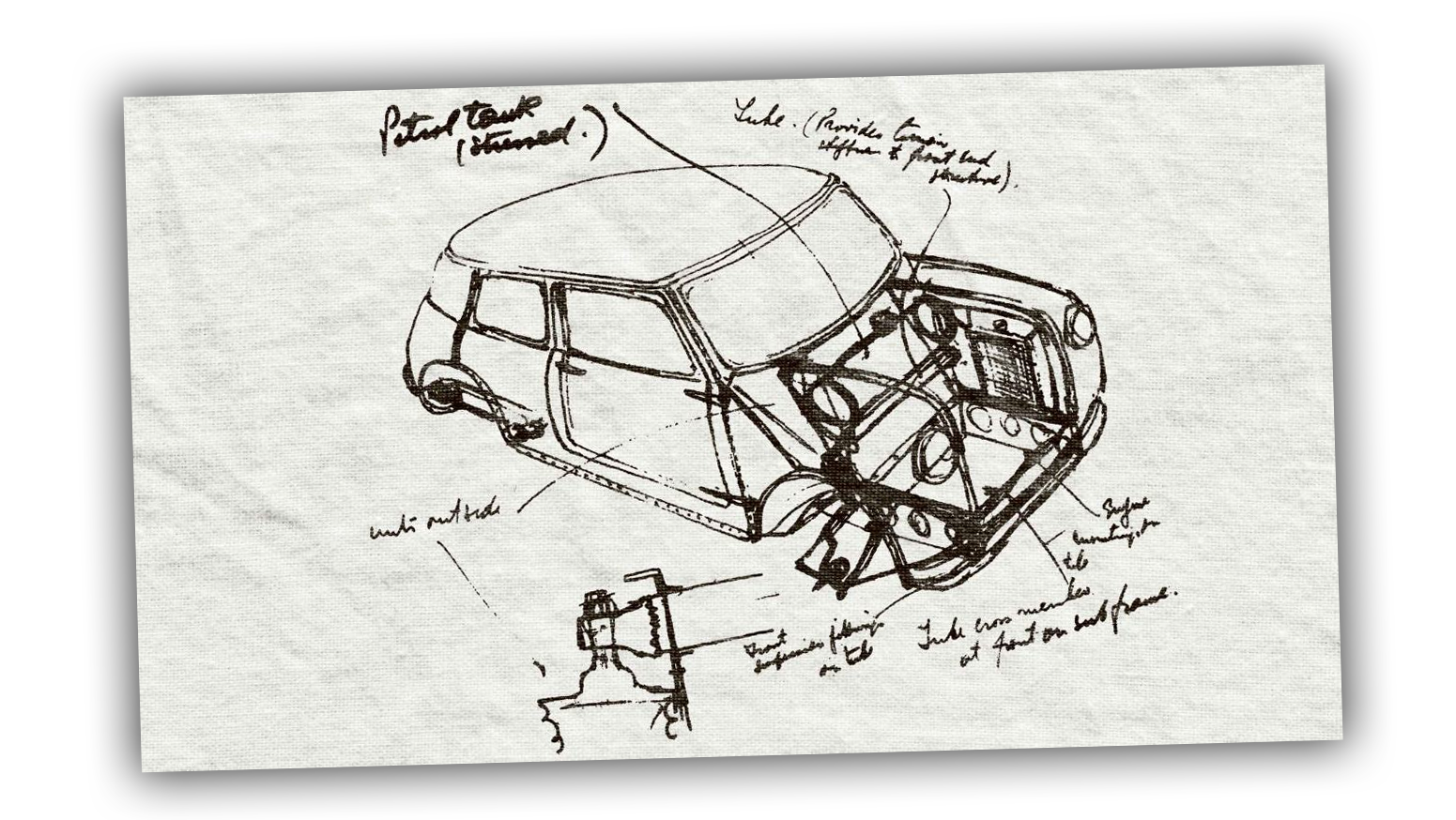 The Mini’s final design, going into production in 1959, was ingenious; it was a 10-foot-long car made up of a big box with a smaller box up front, and that smaller box contained a transverse-mounted four-cylinder “A-series” (as it was called) engine. The transmission was mounted in the oil sump of the engine for maximum space efficiency, and while modern cars generally don’t do that, the overall transverse/FWD layout eventually became the dominant automotive design of the future. (The vast majority of cars today use it). 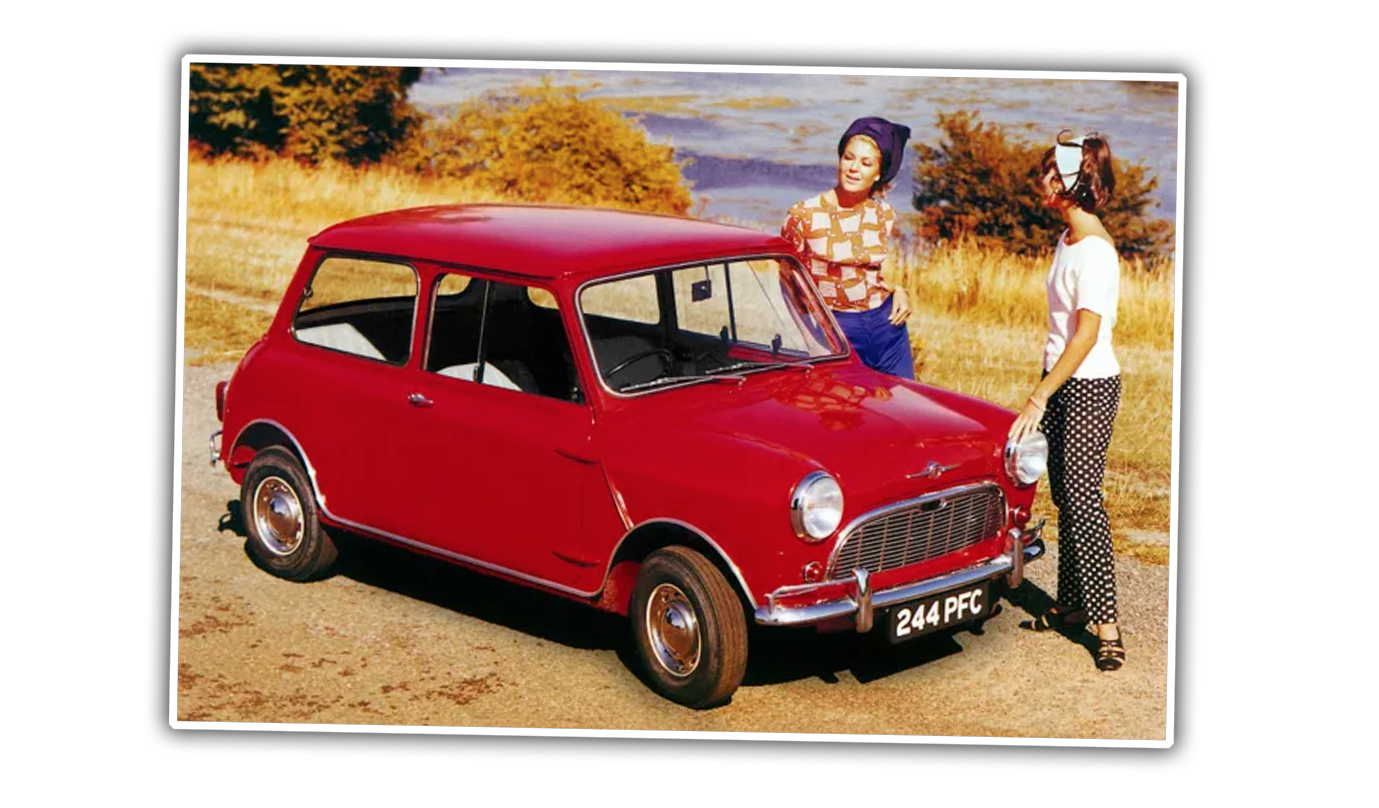 The Mini, of course, went on to become an absolute icon of motoring, and when BMW bought the Rover group in 1994, one of the jewels of that IP crown they acquired was the Mini brand, and the company fully intended to produce a new, modernized FWD small car with clear Mini heritage.

The final design chosen was from BMW’s own Designworks, and was led by American designer Frank Stephenson. The goal was always to make a car that would be unmistakably a Mini. Overall, I think they were quite successful, as you can see:

I think it’s a very good updating of key Mini design elements — well, all except one key element: the headlights.

I like the way the new Mini’s headlights look, but I feel like a crucial mistake was made here when updating the old design, and that’s this: The original was not used as a model for the update. In fact, it’s even worse, because the lights that made it onto the re-designed Mini look like wonderful modernized adaptations of an entirely different headlight from the same period.

And, continuing down this worsening chain of issues, that headlight that the new Mini’s resembles is a familiar and common one, being best known for its use on VWs and Porsches, but also showing up on other European cars of the era including DKWs, Mercedes-Benz vans, Maicos, and other cars. It’s this light I’m talking about: 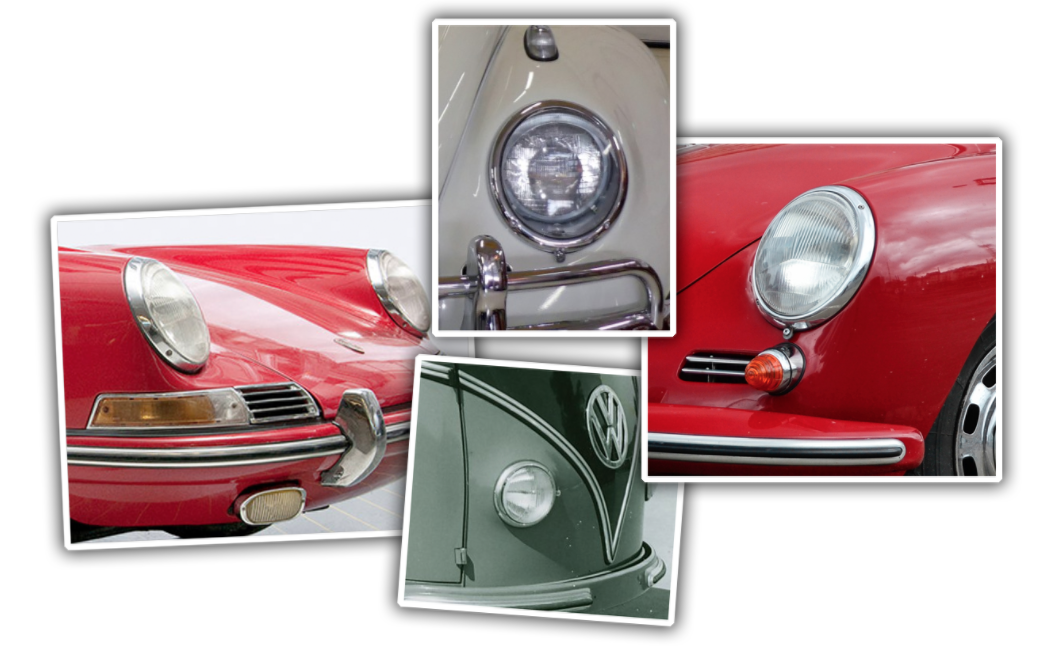 We all know this headlight. Just look at it compared to the light designed for the 2001 Mini: 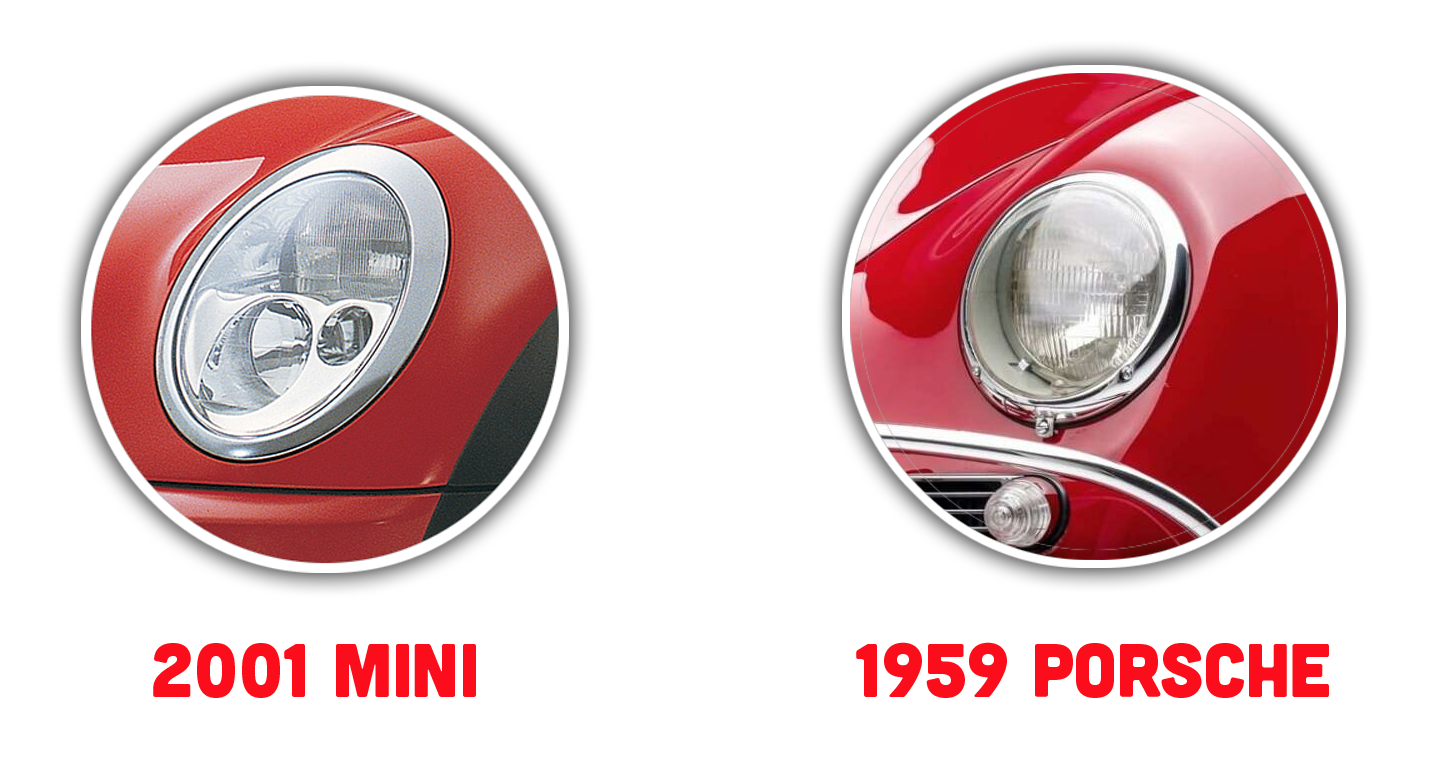 Look at that! Is there any way not to see the 2001 Mini headlight as a modernization of the old Hella lights used on all those VWs and Porsches? It has the same slope, same slightly ovoid shape, the same chrome bezel, the same lights-under-glass design–it looks clearly inspired by that light, and very much not by the simpler round and very vertical sealed-beams of the original Mini.

Can I say for sure that the redesigned Mini used the Hella lights as inspiration? No. But they sure look like them, and in design, that’s what counts.

I feel like this is a big deal because the whole point of a retro car is to update the design of the original, not mix in design elements of other cars of the original’s era. The 2001 Mini would be great if the original Mini looked like this: 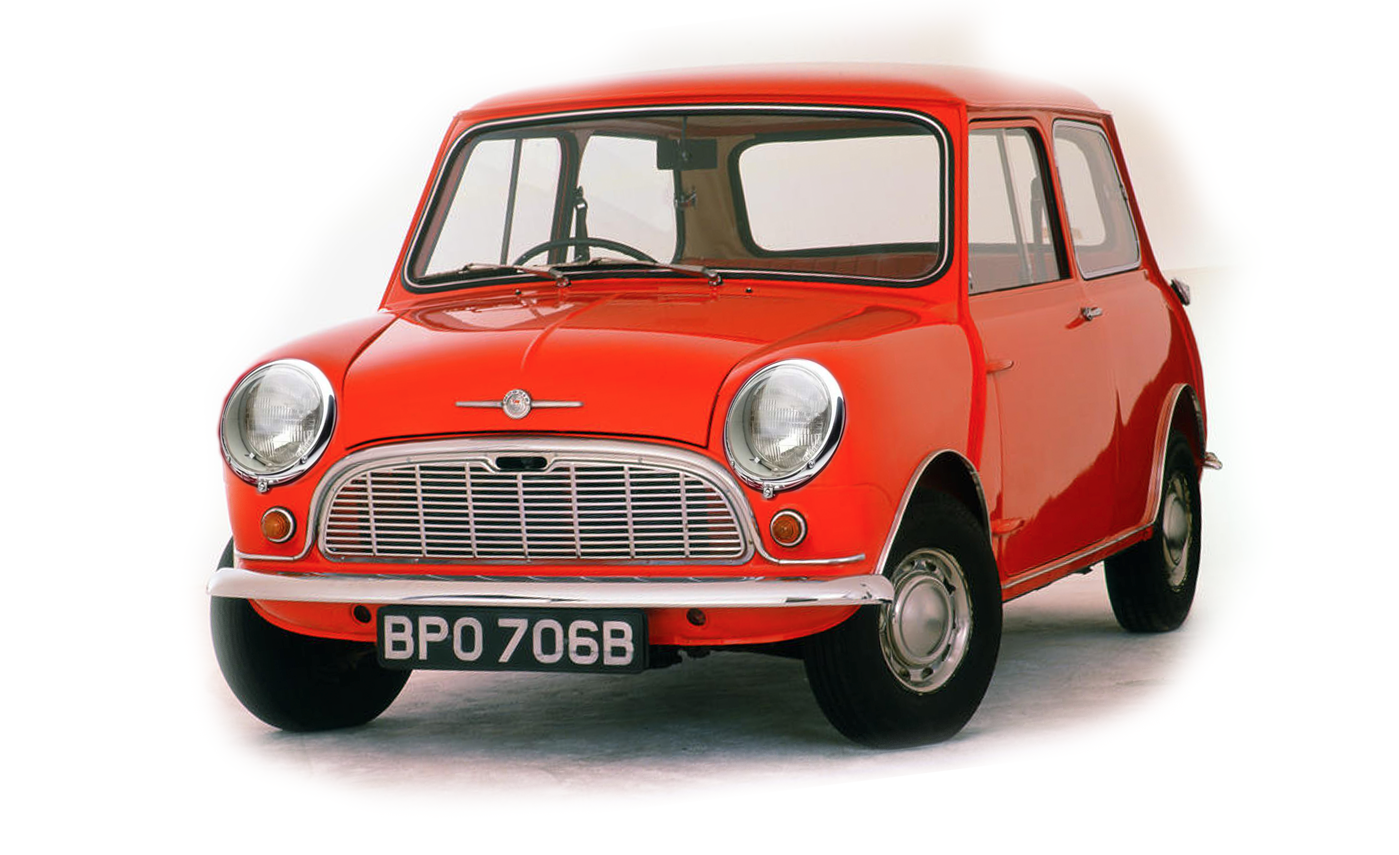 And while I do think that the Mini with those Hella lights looks kind of cool, the original Mini never looked like that. It’s not really a Mini anymore; some part of its essential character has changed with these lights. But that strange hybrid you see above there, that is the car that the 2001 Mini looks like it used as its source.

The original Mini’s vertical, simple round headlights helped give it that bulldog-like face that we all know. If the 2001 Mini design had been actually true to the original car’s face, I think we may have seen something more like this: 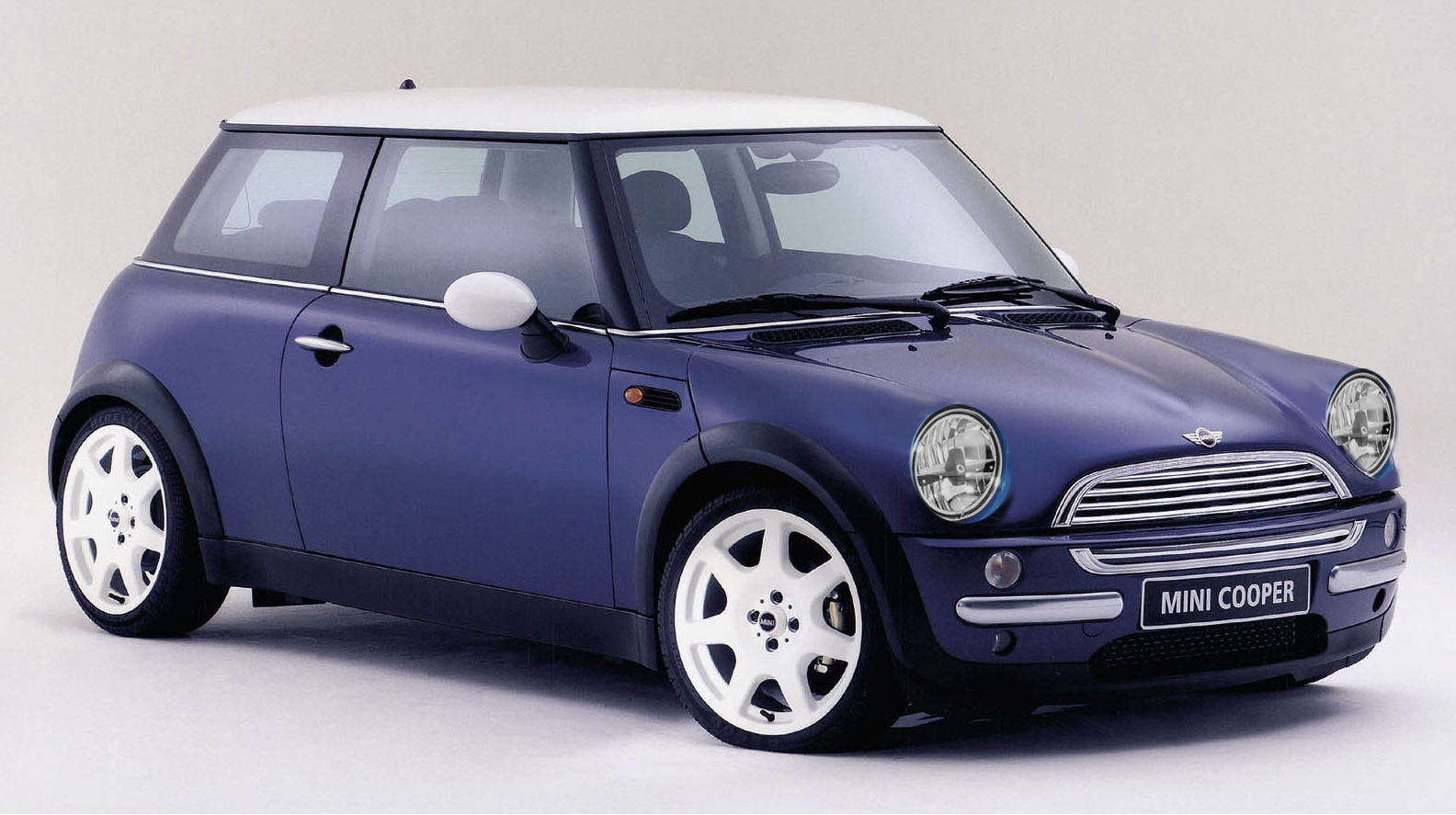 That’s what the Mini redesign should have looked like in 2001. At least, that’s what I think. [Editor’s note: I get your point, Torch, but I don’t know about that look. -DT] 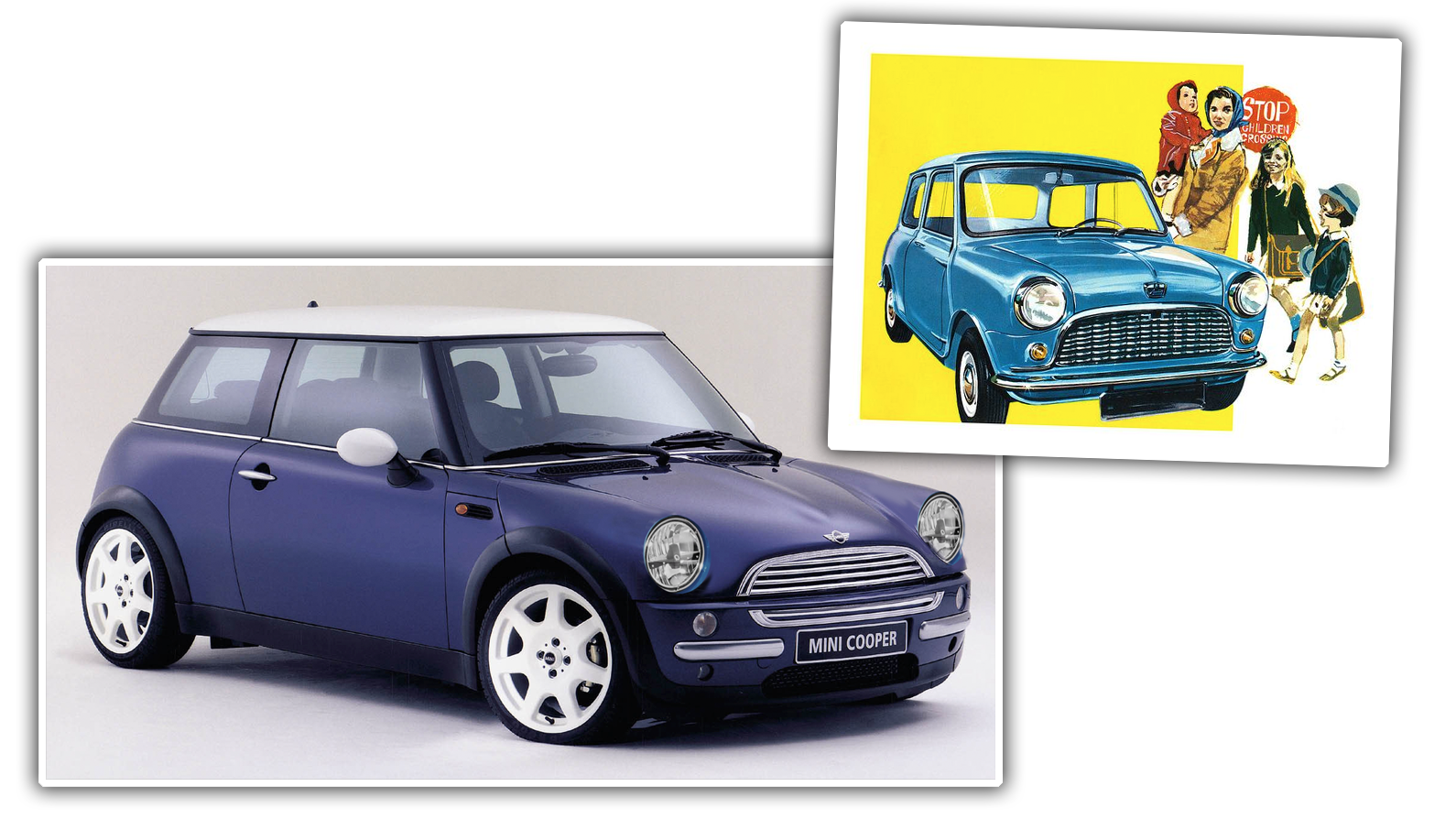 See what I mean? Headlights are a crucial design element, and you can’t just throw an entirely different-looking set on a car and expect it to still feel like the same car.

Our Secret Car Designer suggested that making the fenders a bit fuller as they lead up to the headlights would help clean up the look, and, you know what? He’s right:

You may think that this problem is long over – someone born in 2001 is old enough to buy a beer in America now. But it’s still relevant because all Minis since that first 2001 re-birth have used the sloping, wrong lights as a template, and now we’re here: 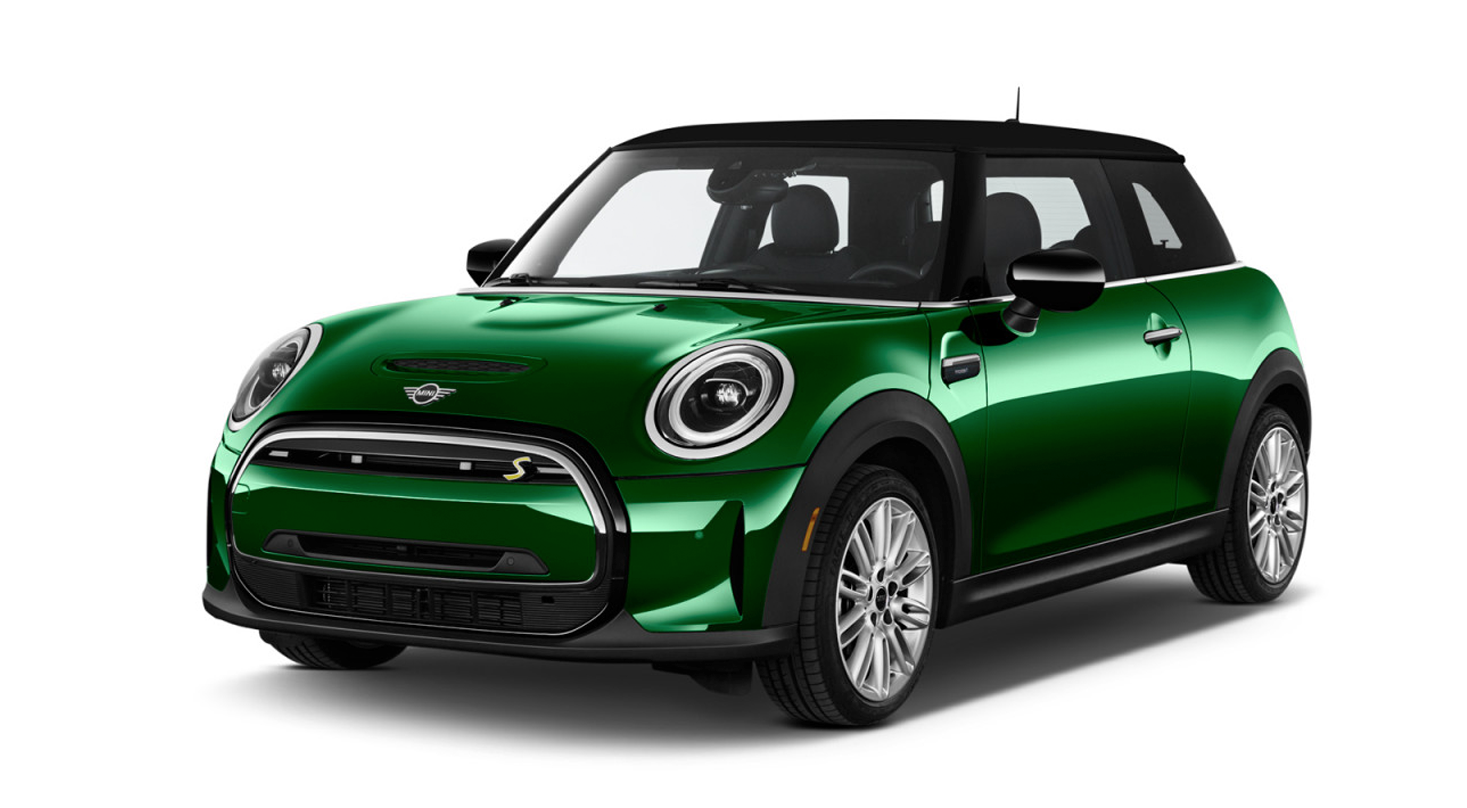 Those lights have evolved and changed and developed, all along the lines of the ovoid 2001 originals, and the end result is now something very, very far removed from the original source. Does this front end feel like a Mini at all, anymore?

The Mini’s face seems to have evolved into something a little shocked, maybe a bit scared? It’s a far cry from the plucky determination of the OG, and I can’t help but think it’d have ended up in a very different place if they just stuck to the correct lights from the get-go.

I'm a co-founder of the Autopian, the site you're on RIGHT NOW! I'm here to talk to you about taillights until you cry and beg me to stop, which I absolutely will not. Sorry. Hug? Also, David's friend.
Read All My Posts »
PrevPreviousMOPAR or No Car: Which Of These Chrysler K-Cars Would You Take Over Walking?
NextI’m A Scientist And I’m Going To Break Down The Physics Of That Crazy Tesla JumpNext