Facebook-f Twitter Instagram Rss
Menu
Menu
Home » Is The $1,200 Beat-To-Death Pontiac Grand Am For Sale In Every Town Worth It? I Found Out.

Is The $1,200 Beat-To-Death Pontiac Grand Am For Sale In Every Town Worth It? I Found Out. 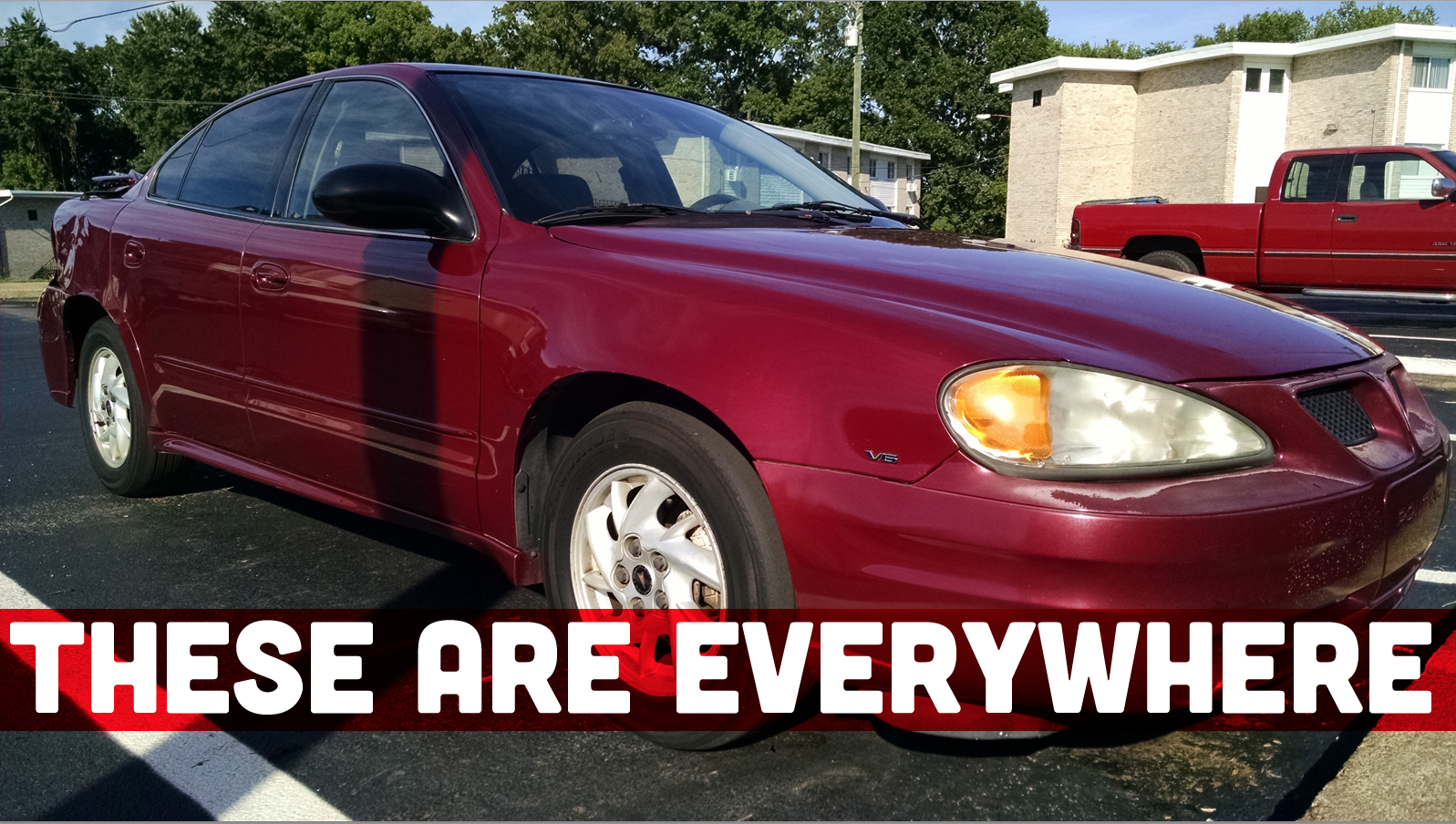 Back in the summer of ’16, I fell into a common trap that many Autopians have surely found themselves ensnared in all too often: I needed  to buy a cheap beater shitbox car to get around in while finishing a project car (which also happens to be a cheap shitbox).

I had found a $220 Stratus Coupe in “Indy Red” (one of the best colors for that car other than “Deep Evergreen Pearl,” which is a killer green) on Nashville’s Craigslist with a blown head gasket. The vehicle was headed to the crusher and calling my name to be rescued. I raced over to the seller’s trailer park and handed over 11 $20 bills with zest. Not long after that, the Mitsubishi 2.4-liter inline-four’s head bolts were coming out in my then-apartment parking lot (the landlords were lenient regarding such matters) and the multi-week project was underway. 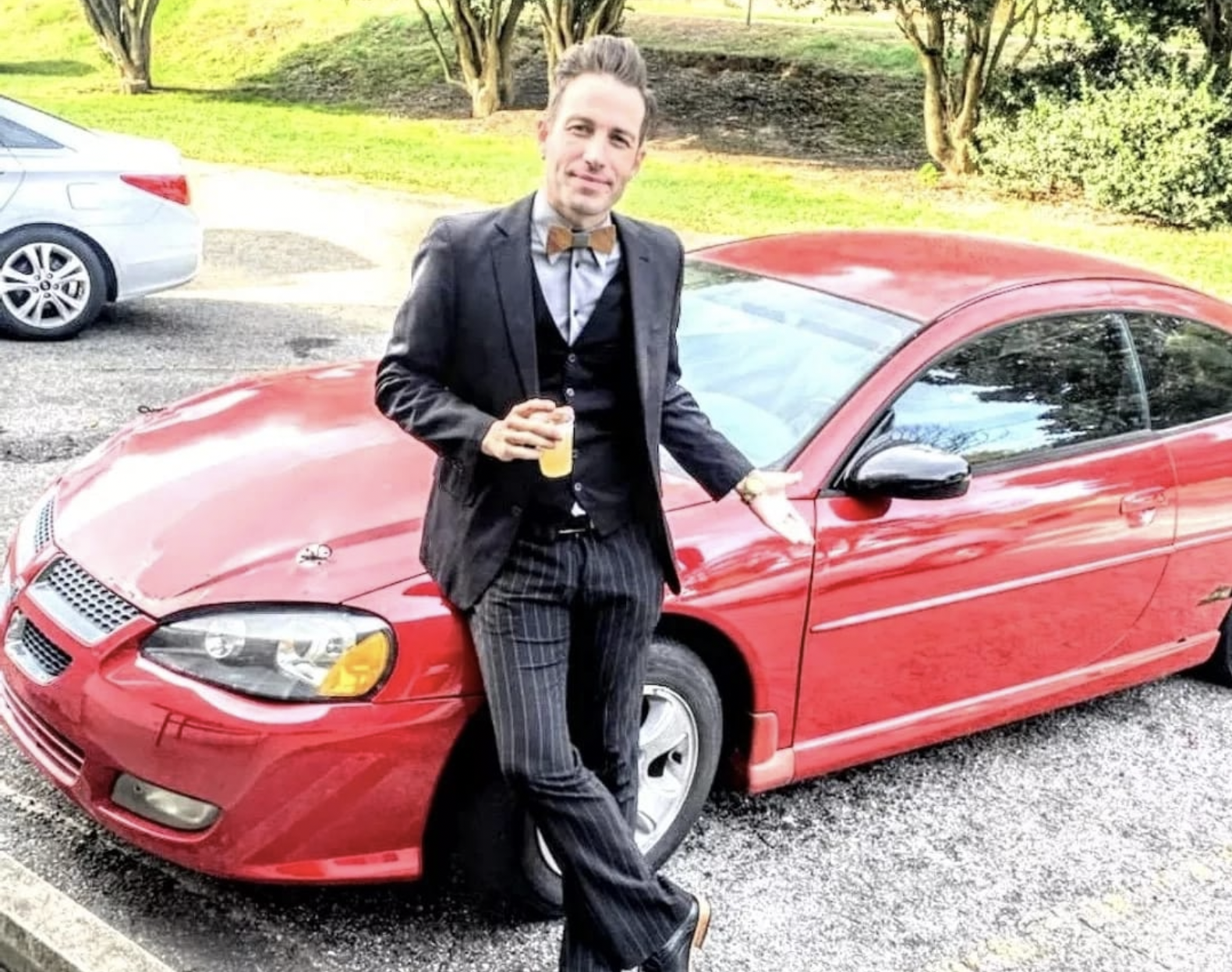 Here’s where I introduce myself. I’m Stephen and I rescue cars from being scrapped unnecessarily. I’ve rescued over 100 moribund cars and found them good homes and a second chance to hit the roads. It’s fun, environmentally beneficial, and rewarding.

[Hi, David here. You may remember Stephen from this story I wrote while working at that old lighting company:

Stephen is a musician in North Carolina who buys total junkers, wrenches on them, enjoys them, then parts ways with them. His Facebook is filled with posts in which he excitedly writes about crappy motorized machines: 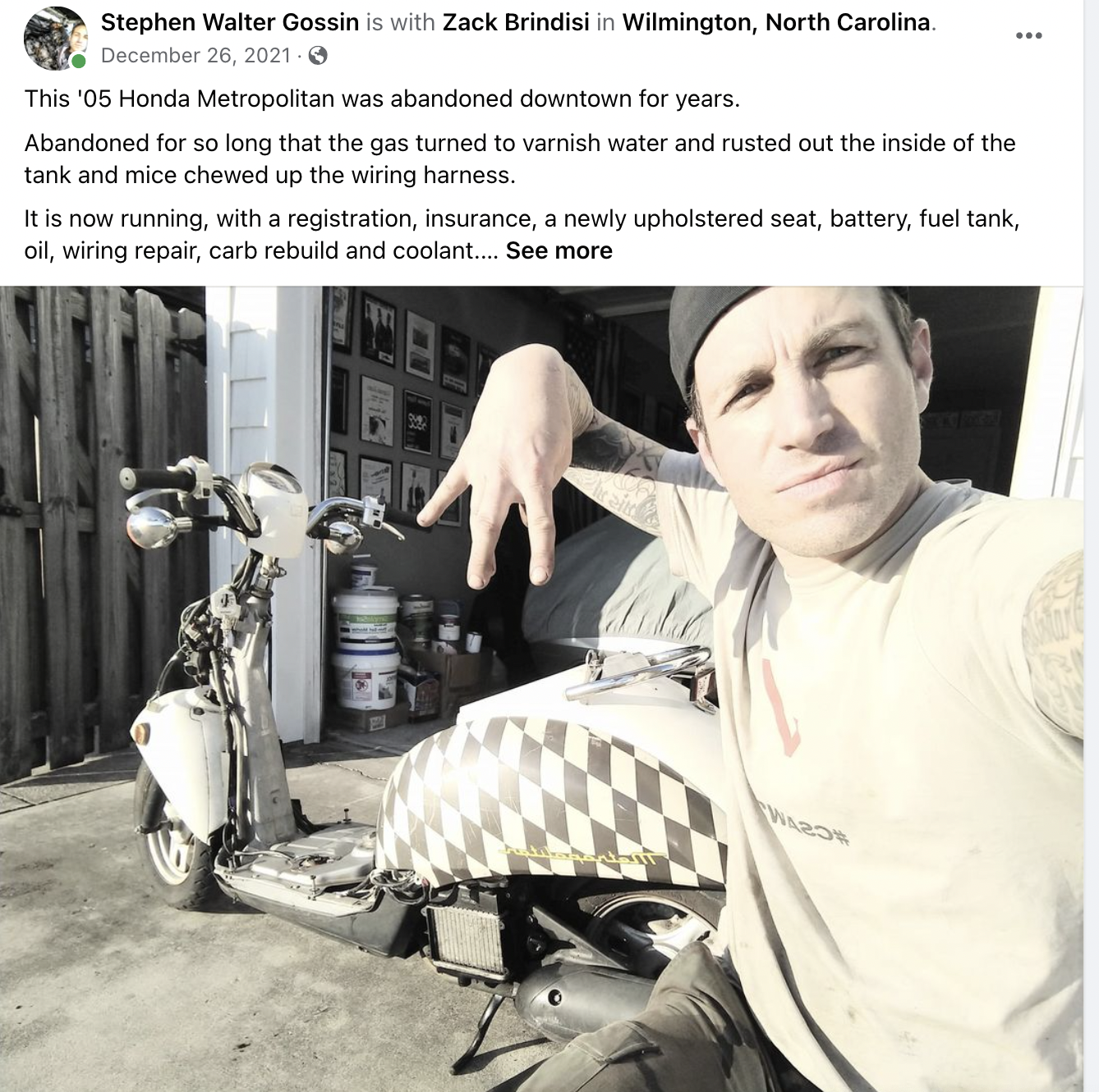 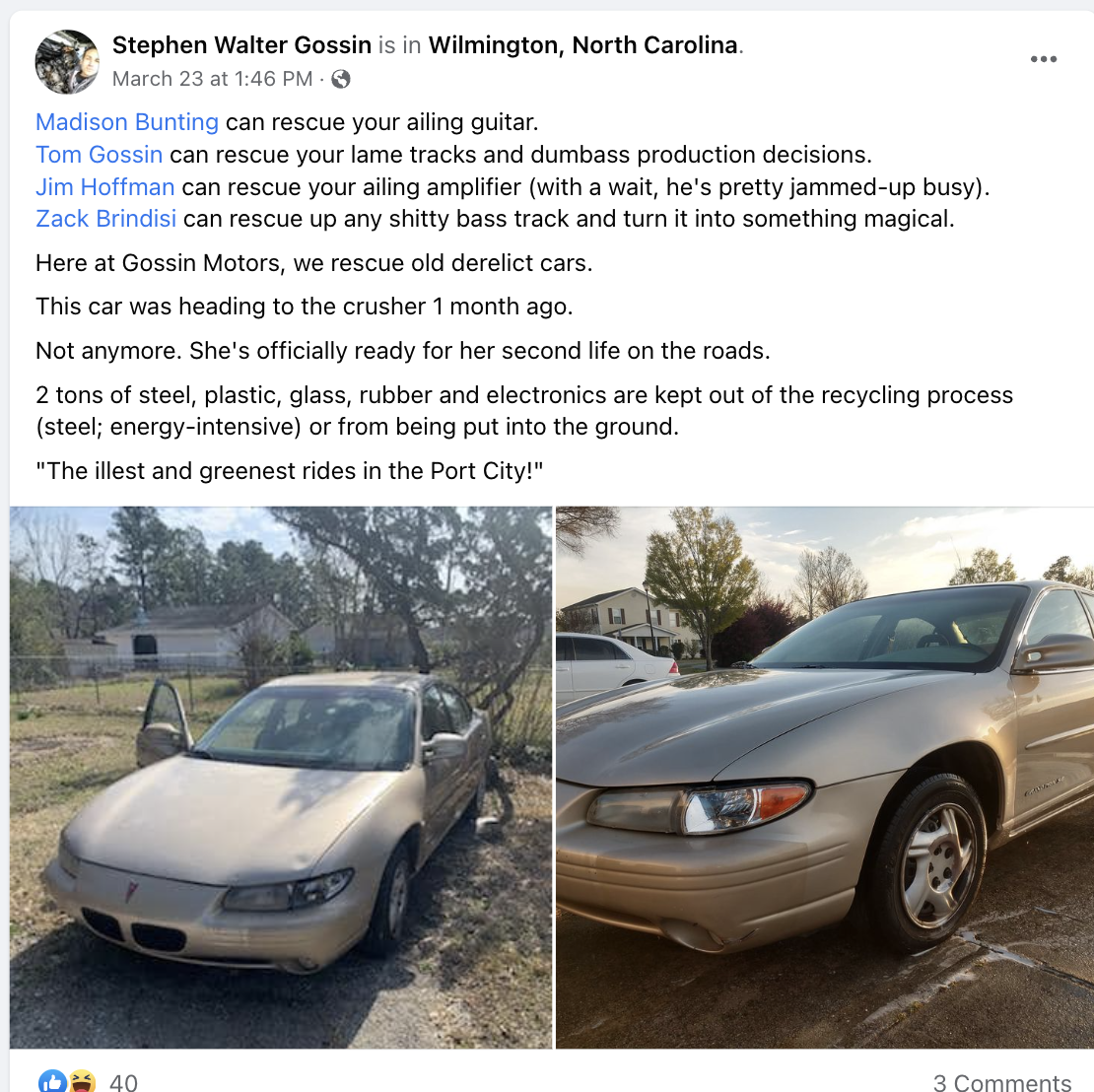 He also writes a bunch of musings about cars that I get the feeling his friends and family don’t really care that much about. Yet he still posts them: 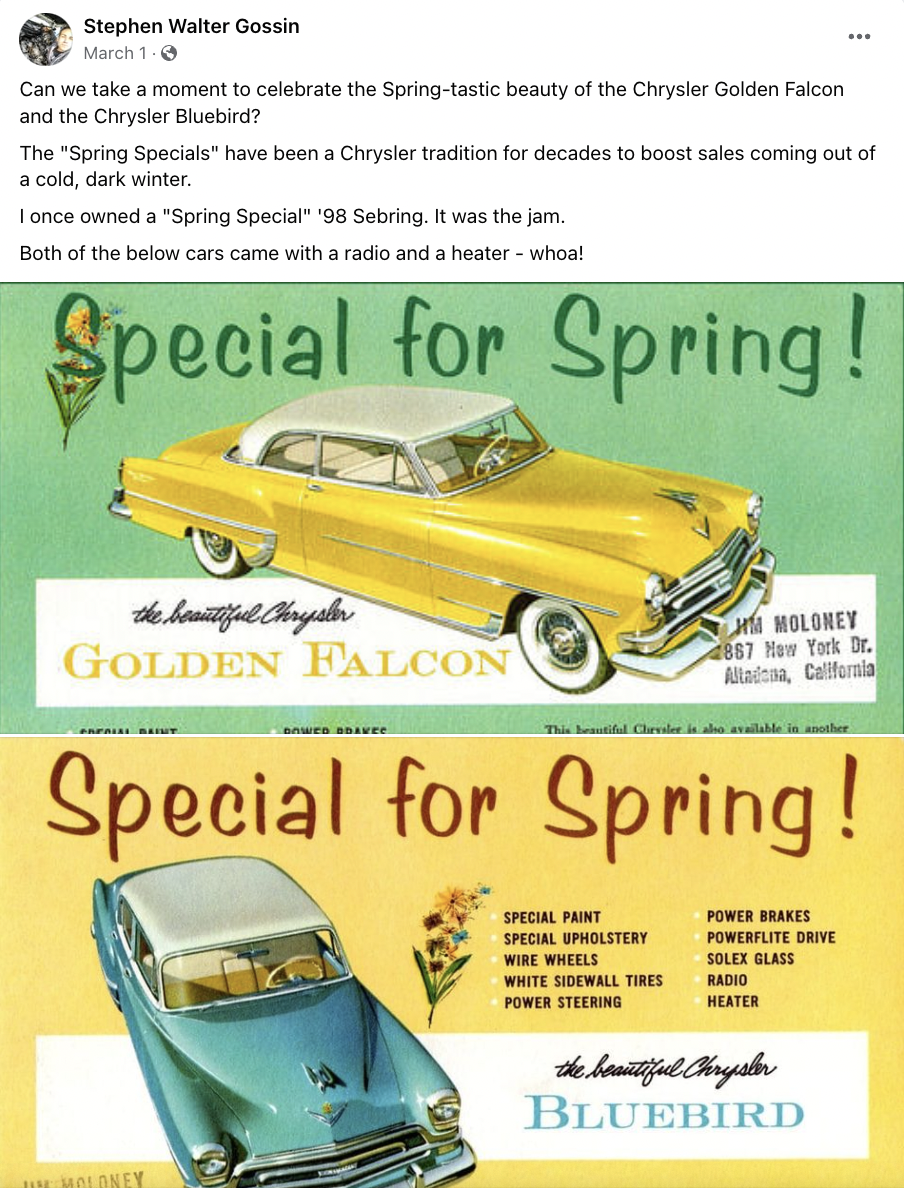 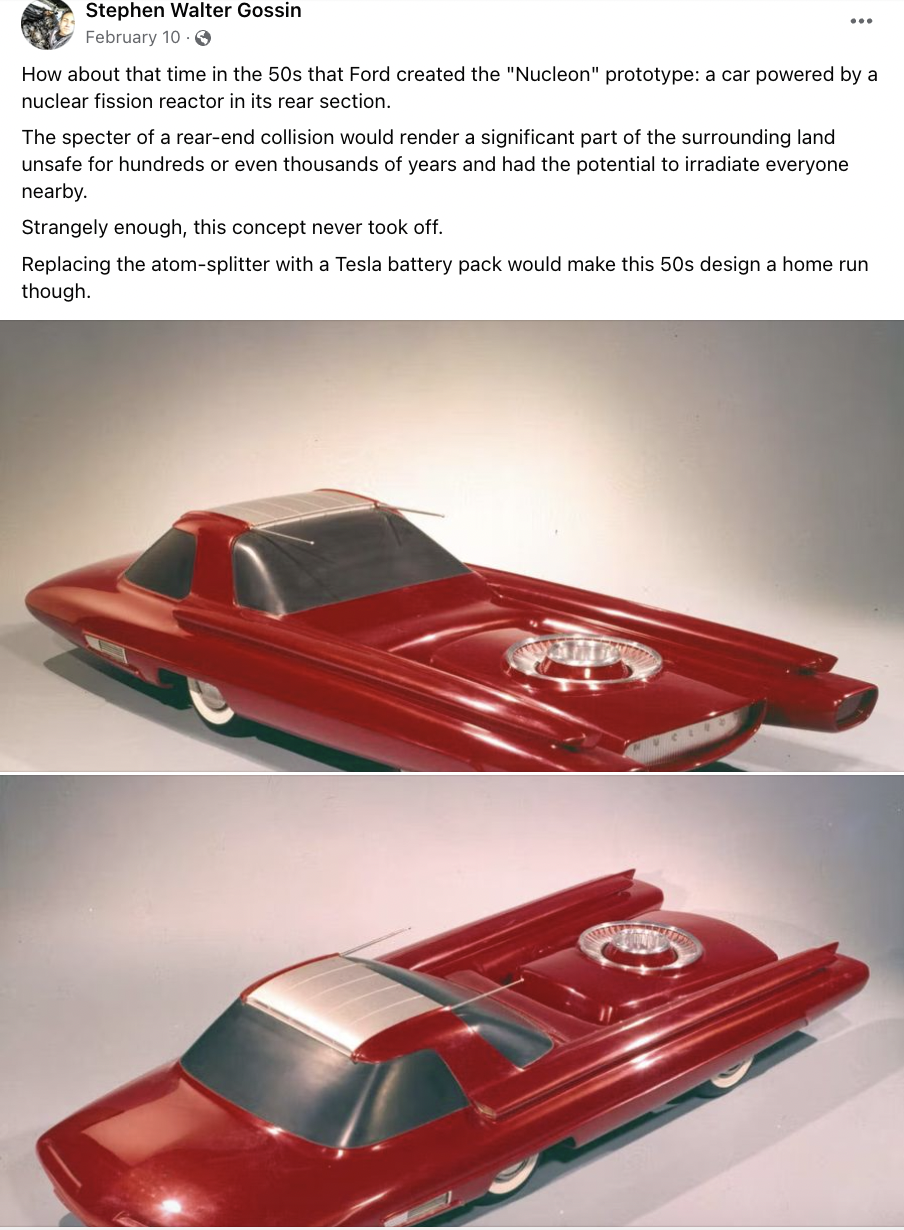 I figure, instead of this car-nut writing into the void of his Facebook page, why not give him a place where people get him. Where his musings about weird old cars can have an ear or two, and where he can comfortably complain about the dumb intake manifolds on Pontiac V6 engines.

Ok, enough about me. Back to the Stratus. Or not. You see this article isn’t about rescuing a Stratus with a bad head gasket, it’s about the car that one has to drive in the meantime while one’s own “Stratus” is under the knife.  It’s about “The Needed Cheap Temporary Backup Car.”

And there are few better examples of “cheap temporary car” than the $1,500-$2.500 Grand Am for sale in damn near every town in America (inflation/current market adjusted — these were going for $1,200 all day just a few years back). You see them everyday in your Craigslist and Facebook Marketplace searches. You mostly scroll past them as commonplace ~20yr old GM plasti-junk — vehicles that seem to always be busted in some way, especially now that they’re on their third decade.

Grand Ams Used To Be Cool, Now They’re Far From It 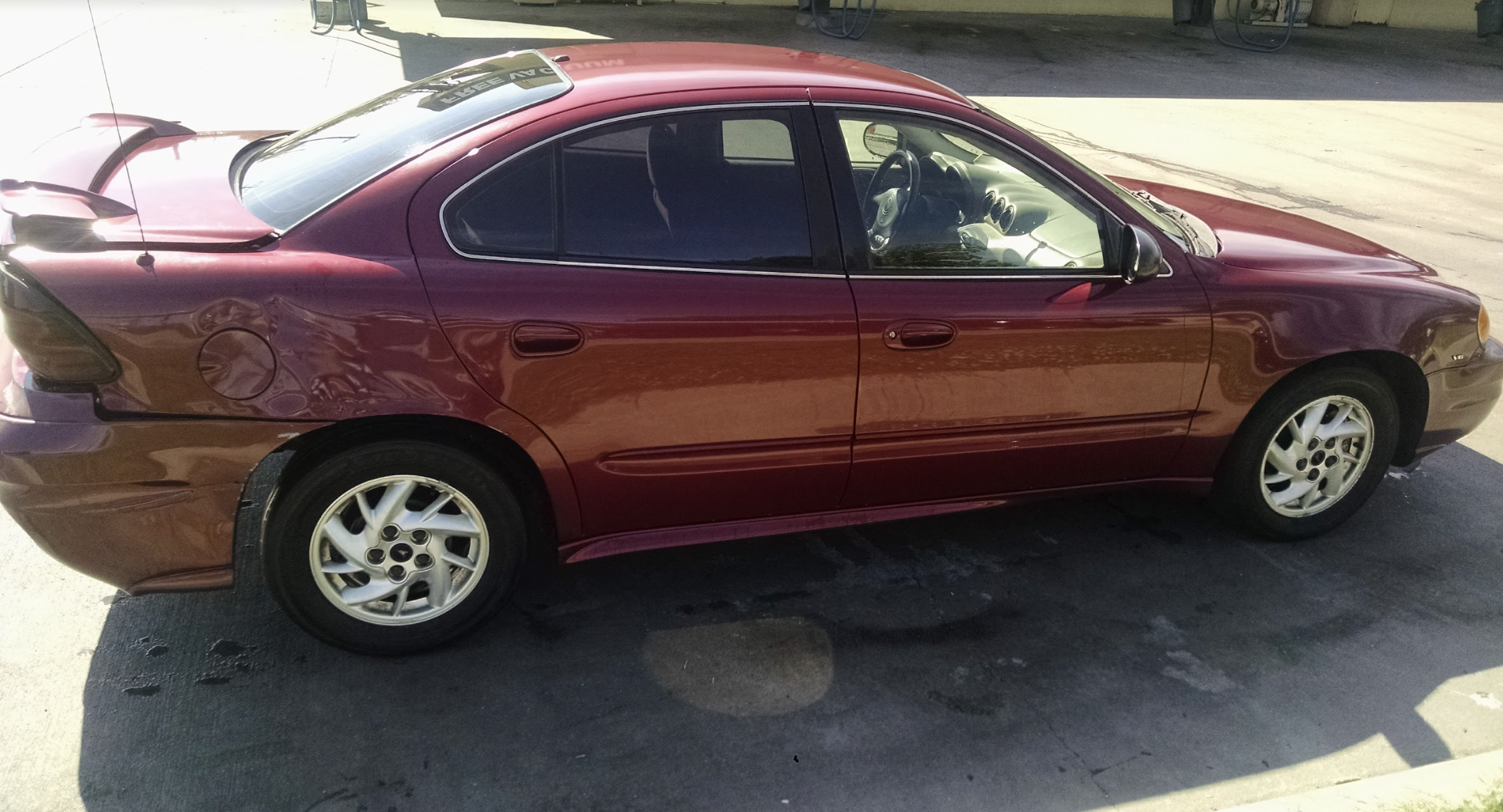 Due to various life events occurring at once, I found myself willing to take a chance on a burgundy (the worst color, of course [Editor’s note: I think the color is great. -DT]) 2001 model mostly due to its price and proximity. This was the fifth (and final) generation of the Grand Am and shared a platform with its corporate sister car, the Oldsmobile Alero. Both of those cars were absolutely everywhere in the 1990s, and honestly, still are more common than you’d think.

If I had to guess why, I would venture a guess that all those young folks in my high school days who drove these were enticed by the styling (admittedly cool for the time) and price, though not so much by the performance. The supporting logic for my purchase in 2016 was a bit different: I figured there were so many of these cars sold (1,104,509 from 1999-2005!) that parts would be cheap, there would be huge aftermarket support, and there would be high numbers of Grand Ams in parts yards.

(Sidebar: This was a couple of years prior to David purchasing an Alero for $1 which serves as a valid and additional example of just how cheap and easy these cars were to find. Granted, David’s car needed painstaking brake work, but its owner was willing to part with it for 50% of the price of a can of soda from a Wal-Mart front lobby vending machine.

Interestingly enough — and a sign of things to come for Oldsmobile — the mechanically identical Alero only sold 565,877 units during the same period. Pretty much a 2:1 ratio in favor of the side-cladded Pontiac. Added together, that resulted in 1,670,386 copies over the 6 year model run. Them be Camry-fightin’ numbers).

Let’s focus on the fifth-gen here since prior generations are all going the way of the Spectacled Cormorant and aren’t as common vehicles to see for sale anymore. Notice that I was interested in this particular car due to it being cheap and close. I already had a pretty good idea of what it was bringing to the table with its “3400” V6 engine putting out 170HP through a four-speed auto gearbox. Answer: not too much “scoot” (as is said here in southeast North Carolina. Note that the GT model had a “RamAir V6 that made a whopping five horsepower more). The gearing meant my car didn’t feel slow, but anyone in the cabin knew intuitively that they weren’t accelerating quickly no matter how hard they’d press that right pedal.

Not Pretty, But Could Be Worse 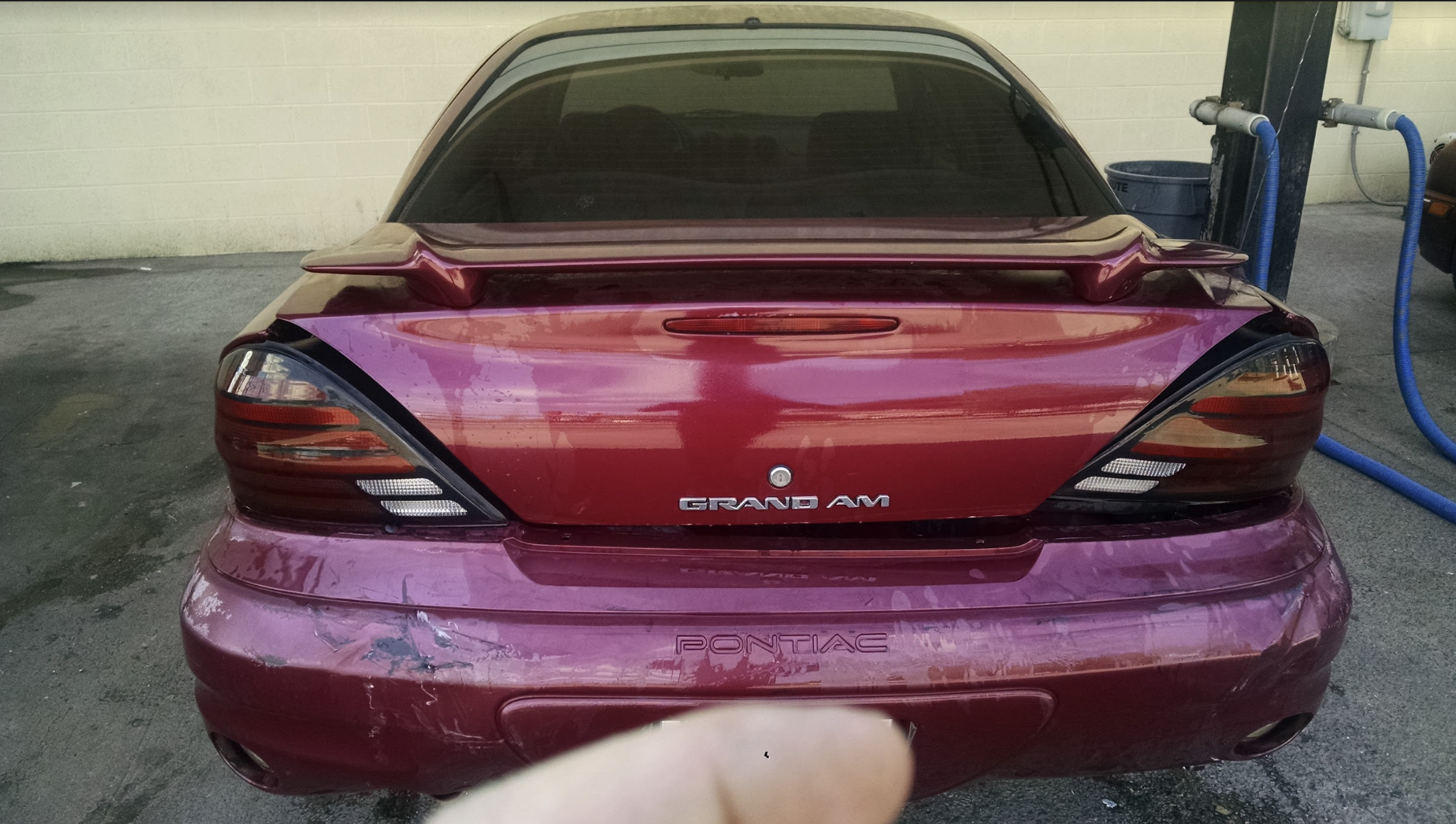 Upon first seeing the car it was immediately apparent that it had been sucker-punched from behind. The deck-lid and rear lights were puckered inward as one would do if trying to run to a restroom after bad decisions at Taco Bell. This was left out of the pictures posted in the ad (of course). The clearly-replaced deck-lid (shown above) did close though, and it was water tight (mostly), so I accepted this condition, remembering that I only paid $1,200.

That rear-end issue was unique to this car, but another issue that was also left out of the ad is endemic to fifth-gen Grand Ams located south of the Mason Dixon Line: a peeling, warped dash pad — commonly called the “curling dash.” My car had a particularly bad case. The defrost vents on the dash pad are usually situated/positioned to blow air upwards and onto the windshield glass. My dash pad had curled back, towards the driver, at a 90 degree angle so that the driver was looking through the defrost vent holes when looking straight out the windshield.

On the plus side, the stereo sounded pretty decent, with factory component tweeters and mids in the front. Honestly, the rest of the interior was in okay shape, especially considering that this era was one of the worst when it came to GM cheap plastic interior cost-cutting. I wouldn’t be surprised if a few Roger Smith acolytes were still at GM in their near-retirement years during this vehicle’s development. 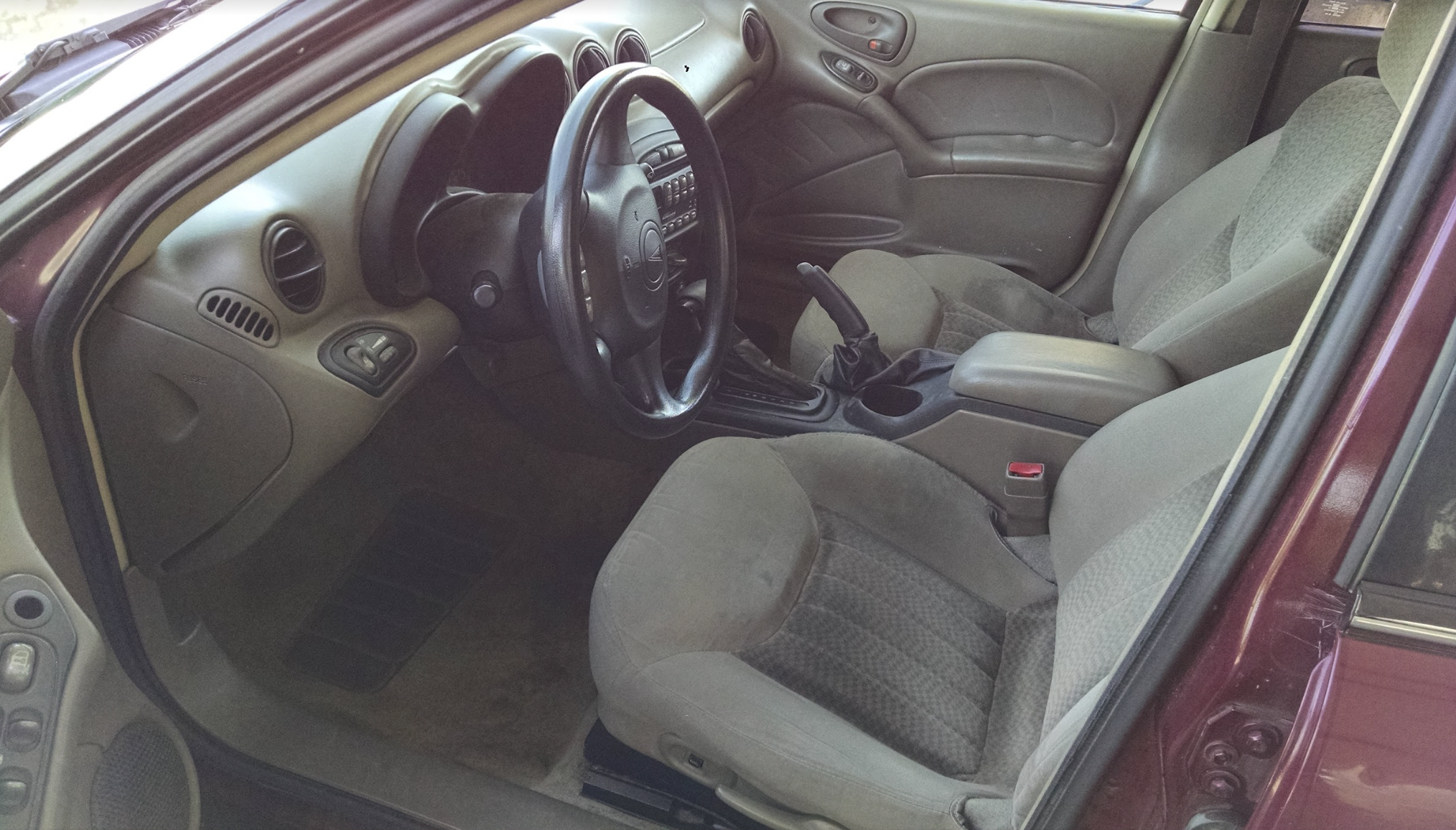 Beyond the noted busted deck lid and warped dash pad, the headlights were clouded and performed poorly and there seemed to be a slight exhaust leak (probably from the rear impact). The car had about 170K miles on it. But, well, that was it. The rest of the car was…fine. Somehow.

In fact I was feeling pretty good about it even before I turned on the HVAC and found the AC to be ice cold. Then I was sold. This was in 2016, so the whole world of used cars was still somewhat normal back then and this type of car didn’t really hold much value, mostly due to the body damage; I guess driving a banged up car makes you appear fast and loose to other motorists? I dunno — seems like a good thing to me. 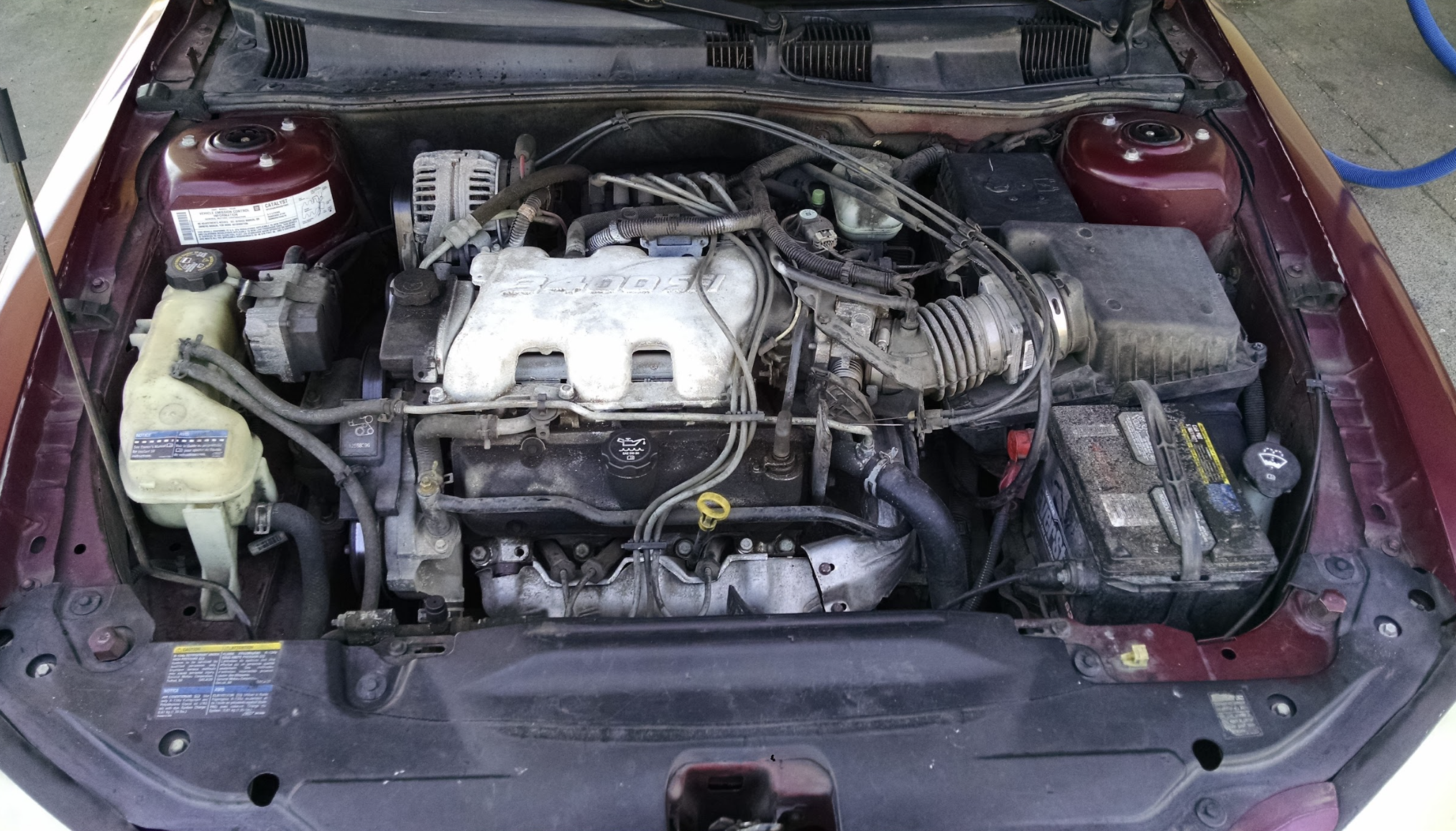 After forking over 12 Benjamins, I piloted that cranberry Pontiac throughout the sweltering summer that year, cruising on I-40 around Nashville in cool AC comfort while soaking up the potholed side streets with the ample sidewall on the stock wheels and soft suspension. I drove it to work and back. I cruised to get groceries. I got decent gas mileage. I ferried drunk friends in and out of downtown Nashville in mouse-fur comfort. I noticed many drivers steering clear of my path, avoiding what looked like a poor driver in a banged-up 14yr old car.

I finished the Stratus head job and ended up selling my Pontiac for exactly what I had in it. It ended up being free transportation and provided great memories and experiences that bring a smile even six years later.

Believe It Or Not, The Grand Am Is A Great Choice For A ‘Beater’

Is every Grand Am in this price range in this good of mechanical shape, or this trouble-free? Of course not. Some are, some aren’t. But the problems are such that they can be dealt with through excellent parts availability/pricing, being so commonplace that repair knowledge is widespread and relatively simplistic design. 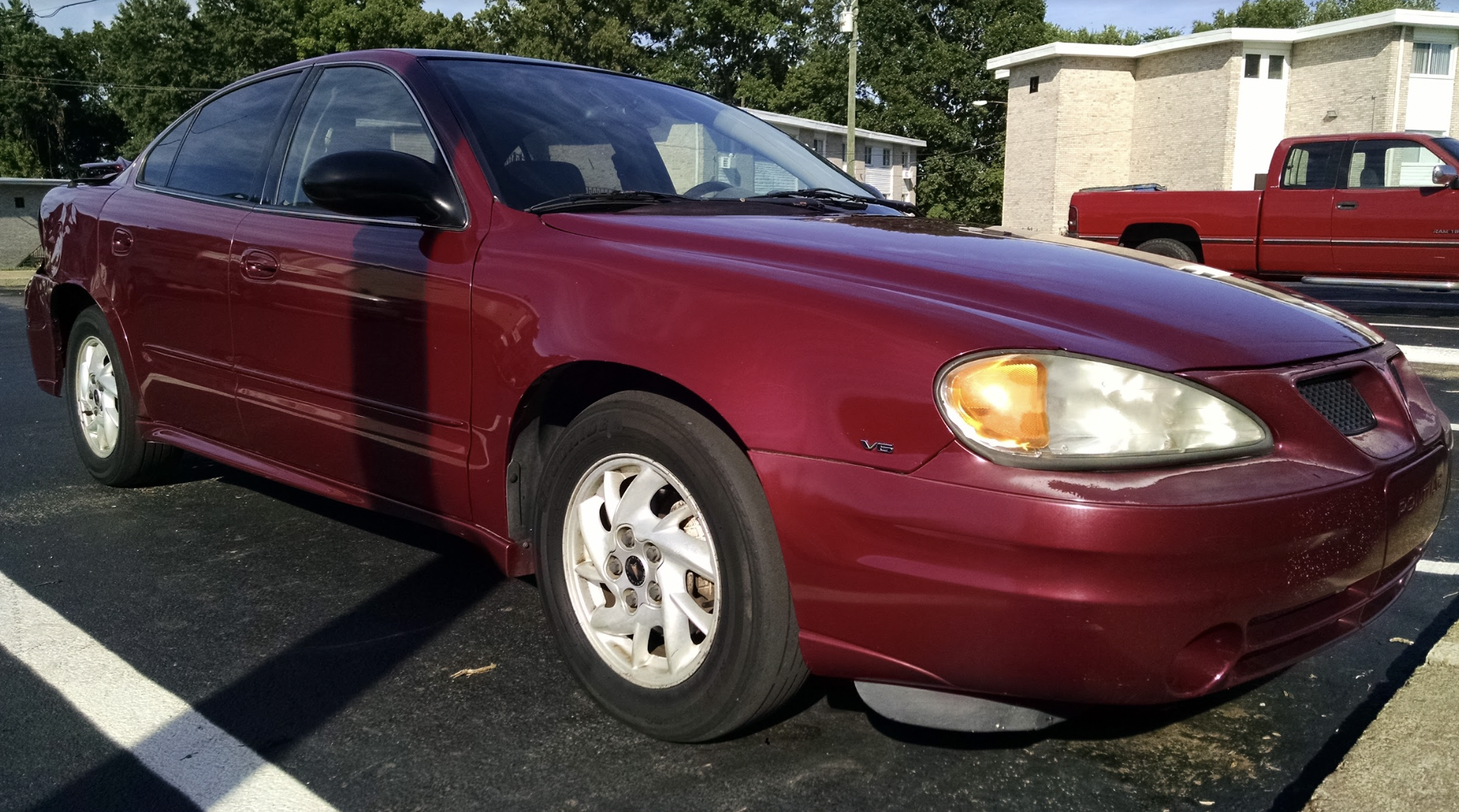 Here’s the thing about cheap Grand Ams. They fall squarely in the “A-to-B” category. The type of cars that can “get you there.” In fact, they practically define those terms in this day and age of motoring. The six cylinder engine is in the GM 60-degree V6 family that’s known to be basically unkillable as long one replaces the failure-prone lower intake manifold gasket. Browse the web and you’ll see dozens of folks lauding the 3.1 and 3.4 engine from that family. The engine is hooked to a four-speed that’s in the GM “4T40” family, and those are also known to last a while if properly maintained.

Honestly, engines, transmissions, axles and drivetrain-related electronics are never what brings these cars to their knees; they are known to be quite durable and reliable. What always brings down these cars and their ilk is the cost-cutting and use of cheap plastics throughout the rest of the car. Sun cracked dashboards, leaking headlights and taillights, bad paint, sheared window motor/regulator gears, broken door handles, inoperable dash buttons and switches, cheap upholstery, and the list goes on.

Type “Grand Am” into your local listings, and many look like they’ve been through hell. And maybe they have; their mechanical bits can definitely take it:

I don’t miss my Grand Am, but I certainly am glad I bought it and I’d do it again in a heartbeat.

So: Is the $1200, high-mileage, beat-to-death Grand Am for sale in every town worth it? Absolutely.

<$500 dollar car aficionado. Left Utica, NY for the "Port City" of Wilmington NC in the late 90s. Environmentalism through keeping running cars out of the crusher's teeth. Current fleet: 2005 Crossfire 1994 Trans Am GT 2003 Stratus 1993 Stealth 2003 XK8 2004 Durango 2013 300C 1993 LeBaron 1993 New Yorker 1997 Ram 1500 Instagram: stephen_gossin Facebook: Stephen Walter Gossin
Read All My Posts »
PrevPreviousHere’s What Happens When An Ex-Formula E Engineer And His Friend Get Their Hands On An Audi TT, A Kit Car, And A Welder
NextWhy This Natural Gas-Powered Bus Shooting Gigantic Columns Of Flame Is An Example Of Safety Tech At WorkNext