Welcome to another exciting episode of Shitbox Showdown! Today’s contestants both attempted to combine Italian style with good ol’ American know-how to create luxury convertibles. Did they succeed? Well, we’re featuring them here, aren’t we?

Looks like it’s the Bradley. I think that’s the right call. As several commenters pointed out, a Cosworth Vega in decent shape is actually worth some money, so restoring one is a “do it the right way or don’t do it at all” proposition. With a VW-based kit car, there is no “right way,” because you’re making it up as you go along, and any future owner needn’t care about originality.

Today, you’ll be relieved to know that both our contestants are intact, drivable, and don’t even look all that bad. I got a tip from our very own shitbox-whisperer S.W. Gossin about a Cadillac Allanté for sale. After thinking about it for a while, I determined there was only one possible contender worthy of this sleek Italian-American machine: its crosstown rival, the Chrysler TC by Maserati. And lo and behold, the internet classified gods smiled upon me, and I found one of the only 7,000 or so ever made, running and driving, in our price range. It was meant to be. Let’s check them out. 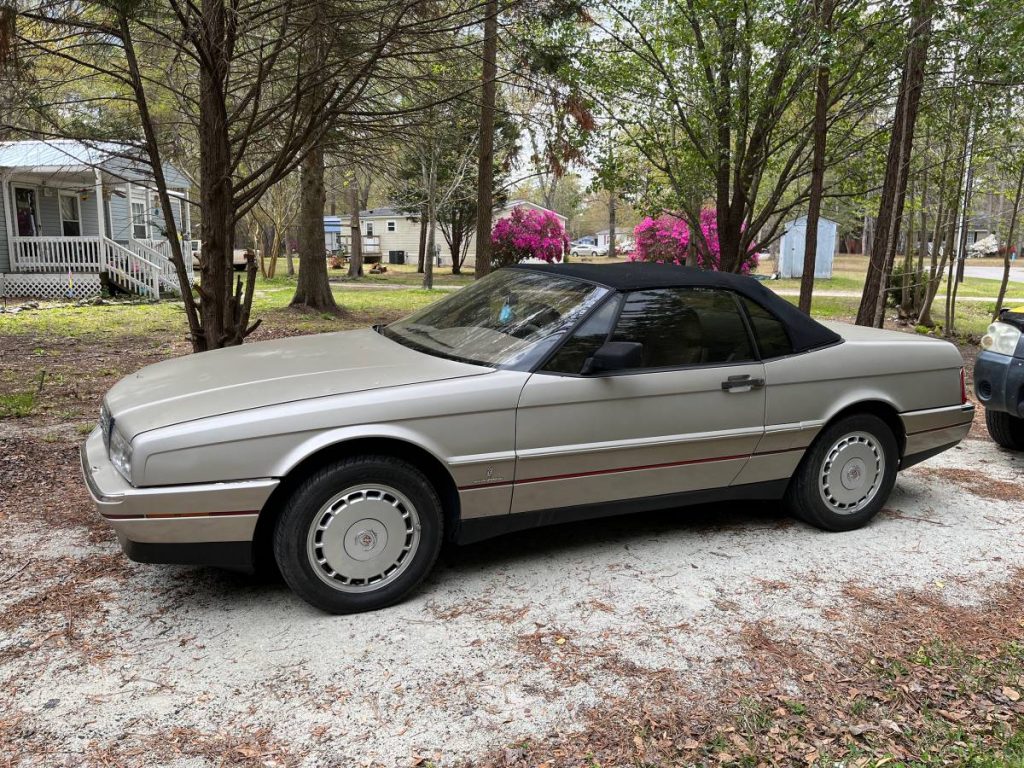 “You know what would make a lot of sense? Let’s have a legendary Italian coachbuilder make bespoke bodies for a niche-market convertible, then build special airplanes to carry them across the Atlantic back to Detroit so we can finish assembling them, and sell them for a massive premium over our other mechanically-identical cars.”

Said no one ever. 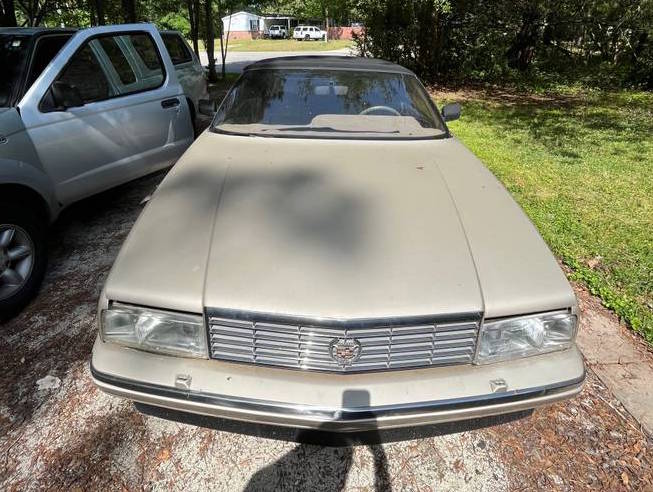 Cadillac’s Allanté was yet another attempt to appeal to a younger demographic than the golf-then-dinner-at-4-pm crowd. It was a 2-seat convertible aimed at Mercedes SL buyers. The body was styled and built by legendary Italian coachbuilder Pininfarina, then flown to Michigan aboard modified Boeing 747s for final assembly. It was a horribly inefficient way to build cars, but it did result in arguably the prettiest Cadillac of its era. 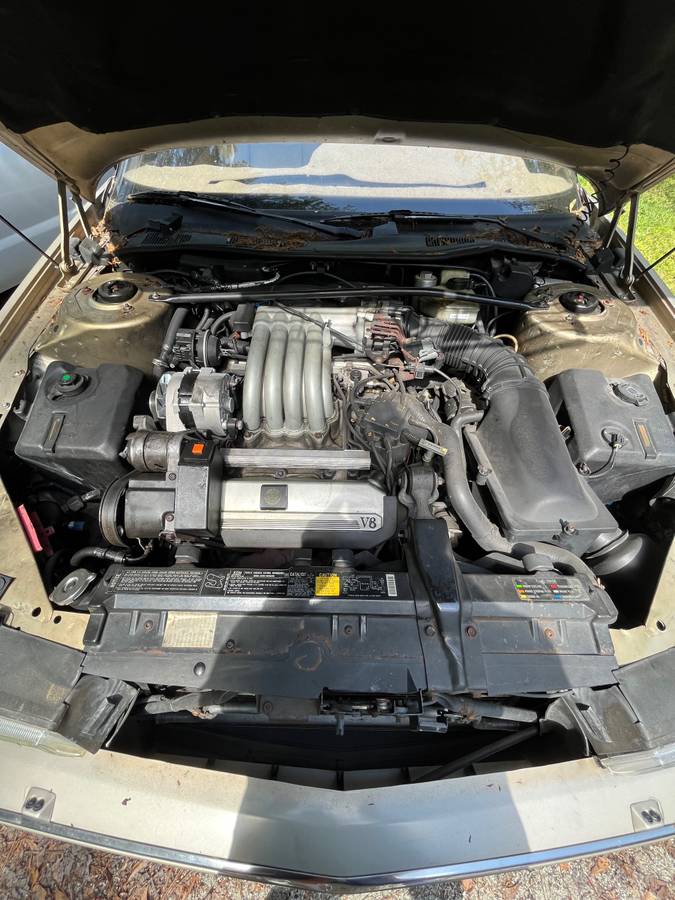 Mechanically, the Allanté didn’t break any new ground, and that’s just fine: Cadillac’s HT-series engines were tried-and-true by 1987 when the Allanté was introduced. This car features a 4.5 liter variant with multi-port fuel injection and a standard-issue four-speed automatic, all well within GM’s wheelhouse. The seller doesn’t specifically say anything about the running state of this Allanté, but they do call it “awesome,” which indicates to me that it is, in fact, mobile. Most cars lose their awesomeness about the time they fail to start. 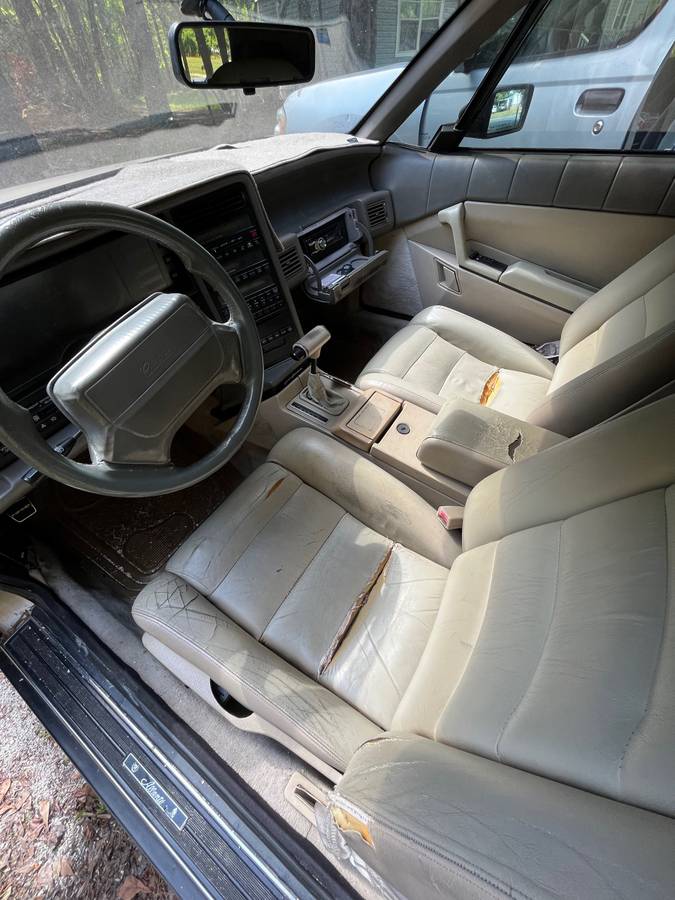 The outside of it looks nice, although it’s a shame about the boring color. Allantés look best to me in either black or silver, with a red interior in either case. This “Suburban Camouflage” beige doesn’t do the crisp Pininfarina styling justice. Inside, a few popped seams and some wear and tear show the years and miles, but it’s not awful. There is an awful lot of electronic frippery in the dashboard of an Allanté, however, and one would be wise to test it all before purchase. 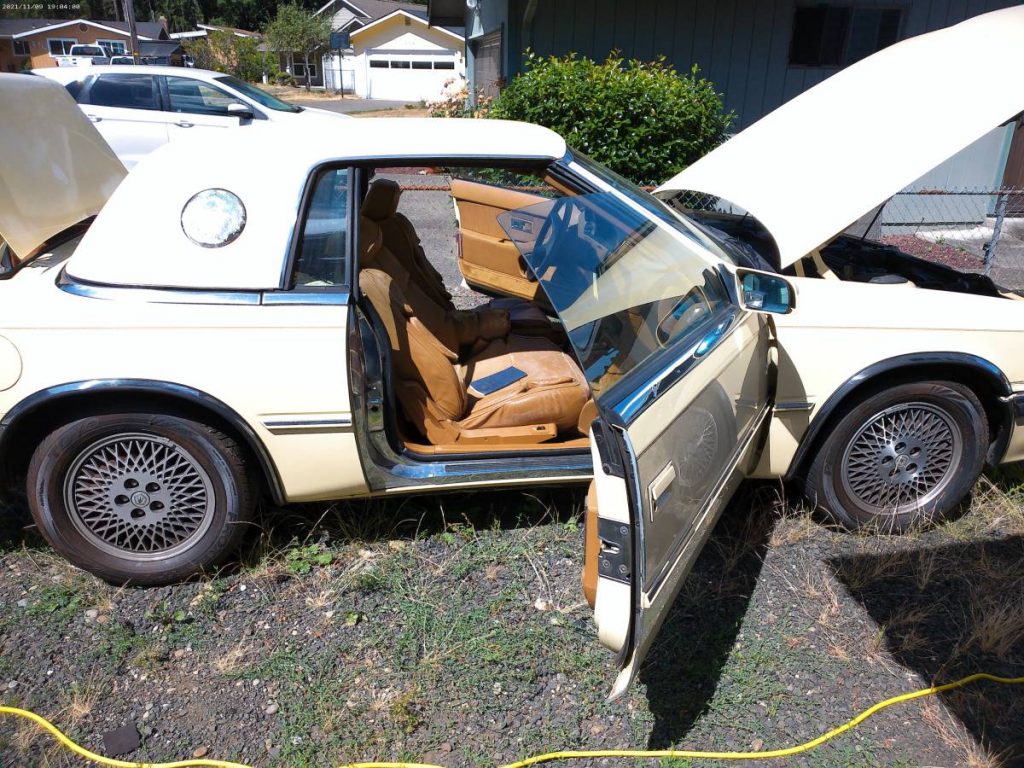 Meanwhile, across town at Chrysler, typically shrewd and on-point auto executive Lee Iacocca was ramming this vanity project down his company’s throat. The TC by Maserati was meant to be a flagship for Chrysler, to shake off the blue-collar K-car image and regain some of the glory of the 1950s and ’60s. Instead, it was essentially a LeBaron with portholes. 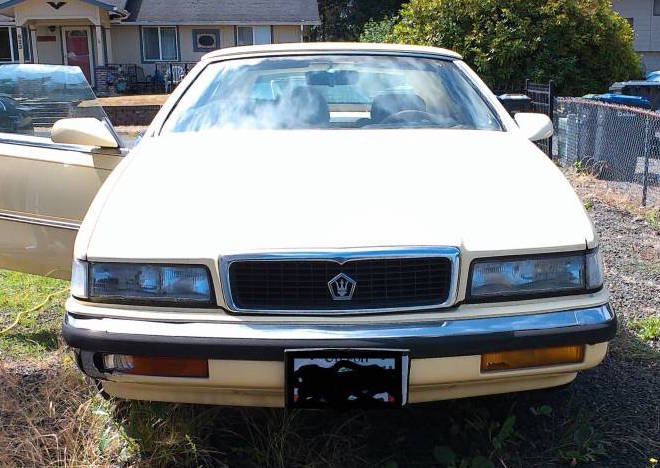 The TC’s body was also made in Italy, by Innocenti, and final assembly was done by Maserati in Milan. Chrysler shipped engines, transmissions, and other components to Italy, rather than flying half-completed cars back to America. I guess that made more sense? What never did make sense, to me at least, is the crass mishmash of the two firm’s logos into one unbelievably tacky emblem. It looks like a made-up emblem from a John Hughes movie car. 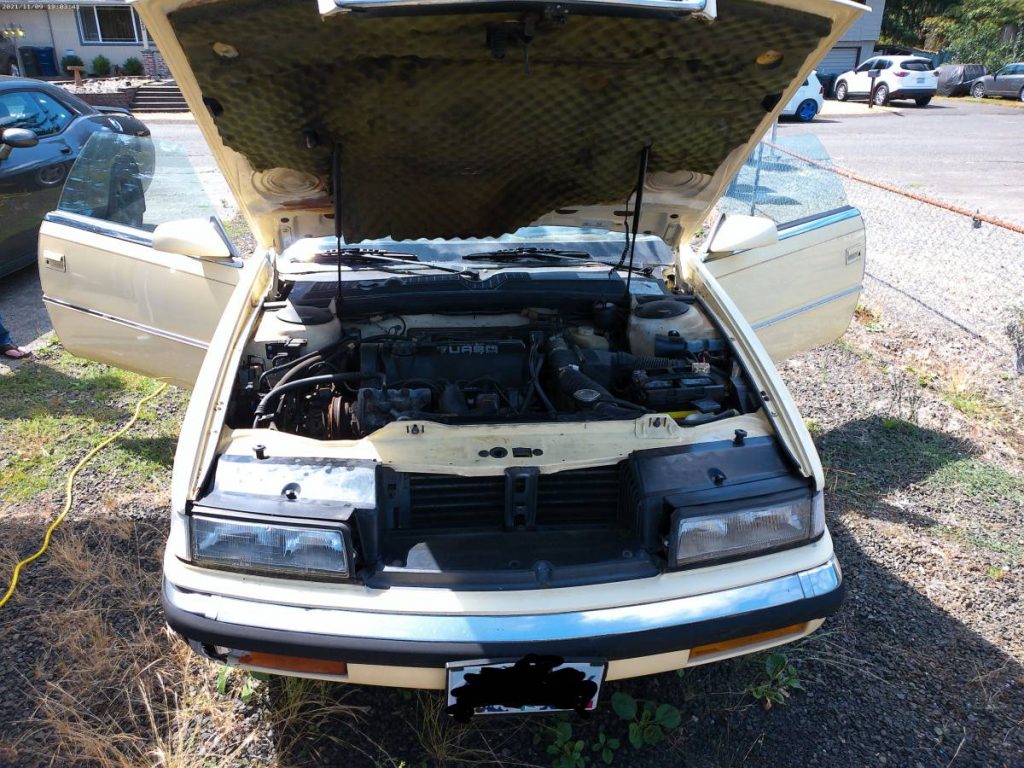 As a first-year TC, this car is powered by Chrysler’s own 2.2 liter turbo engine, here coupled to a Torqueflite three-speed automatic. A special run of 500 TCs received a more exotic variant of this engine, with a twin-cam head designed by Maserati and made by Cosworth in England, coupled to a Getrag five-speed manual transmission. But this isn’t one of those. 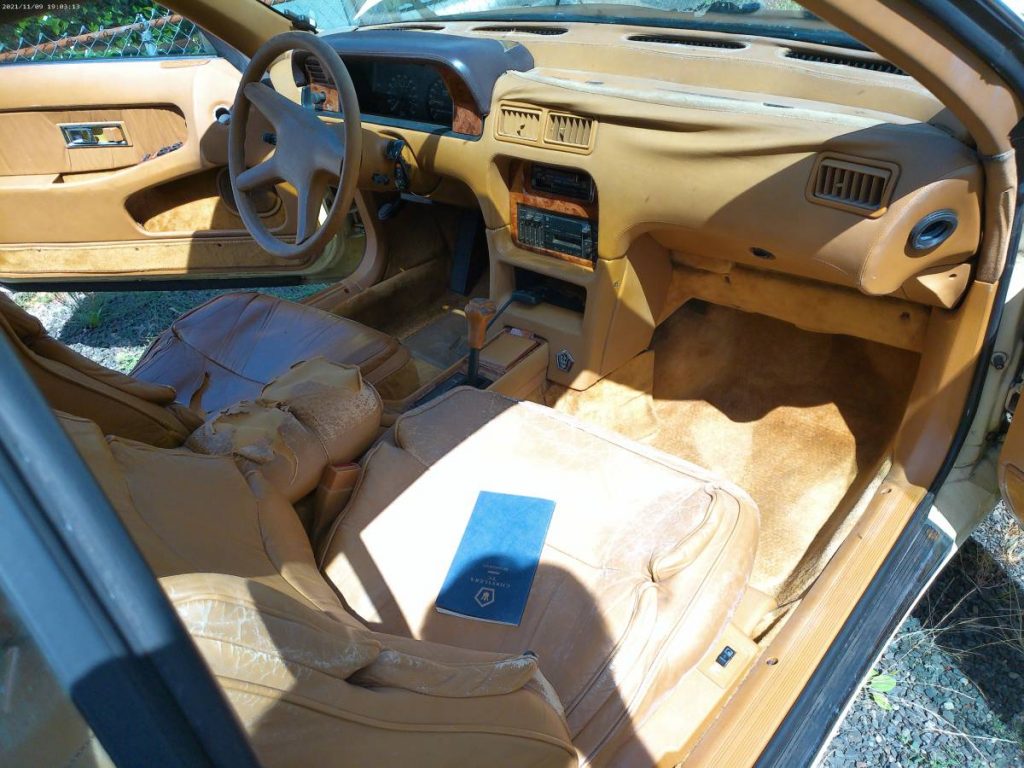 The seller has spent some recent money on this car in the form of new tires, a new windshield, and some other mechanical work, and says it “runs good.” Cosmetically, it’s passable: the pale yellow paint is in decent shape give or take a few bumps and bruises, but the fancy leather interior has quite a few rips and tears in it. And the dashboard appears to have melted. Not sure what’s going on there. Hopefully it at least still has the radio.

These cars share, apart from their Italian-American heritage, the sense of the optimism bordering on hubris of the American auto industry slowly getting its groove back after the doldrums of the ’70s. Both were a gamble, and neither gamble paid off, but now thirty years later, at the bottom of the depreciation curve, they both look like pretty nice cheap old cars. Which one is more your style?