Kawasaki Is Electrifying Its Motorcycles, And One Of Them Is A Wild Parallel Hybrid

As Americans put away their motorcycles for the winter, riding is only getting hotter out in Italy. At the EICMA Motorcycle Show 2022 in Milan, motorcycle manufacturers are putting out their best ideas for the future. Kawasaki rolled into the show with prototypes declaring ambitious plans for an electrified future. Team Green didn’t just bring a prototype for an EV, but a prototype for what sounds like a fascinating hybrid and even a weird hydrogen-powered motorcycle.

Last time we checked on EICMA, we looked at the Velocifero Jump. That electric motorcycle has specs like a Honda Grom, but comes with a striking design and hopefully a low price. But the Jump really isn’t doing anything new. One company with a few fresh ideas is Kawasaki, and to call them ambitious would be an understatement.

Last year, Kawasaki announced that by 2035, it wants all of its new motorcycles sold in Australia, Canada, Europe, Japan, and the United States to be electric. And before that target date, Team Green said that it wanted to introduce more than 10 electric and hybrid-electric vehicles. These are ambitious goals, especially considering that the company doesn’t have a single production electrified motorcycle. But Kawasaki has been developing its ideas for the future. A 2015 patent filing suggests that Kawasaki’s electric ambitions are over seven years in the making. Prototypes have been seen testing since 2019, and now, we’re being given production dates. 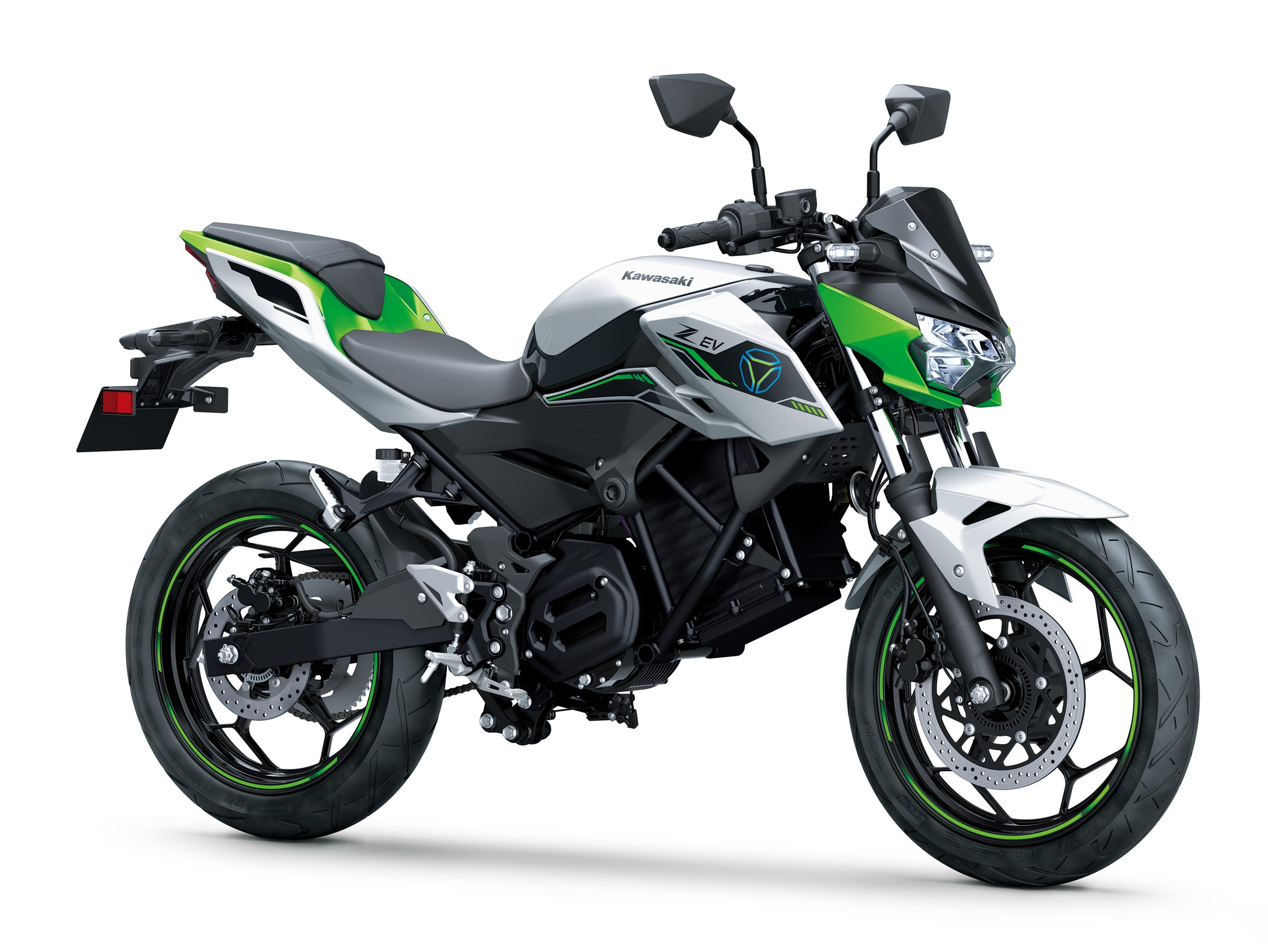 The first is the Kawasaki Z BEV. Set to enter production in 2023, this little naked motorcycle is built to comply with European A1 license regulations. That means that it’ll have no more than 14.8 horsepower on tap (11 kW). It’s not going to do a wheelie and a burnout at the same time, but should be enough power to keep up with local traffic.

Next is the Kawasaki Ninja BEV. This motorcycle is more of a sportbike, fitting for its Ninja branding. It has aggressive styling like a Ninja 400 and like the Z BEV, this one is also coming out in 2023. 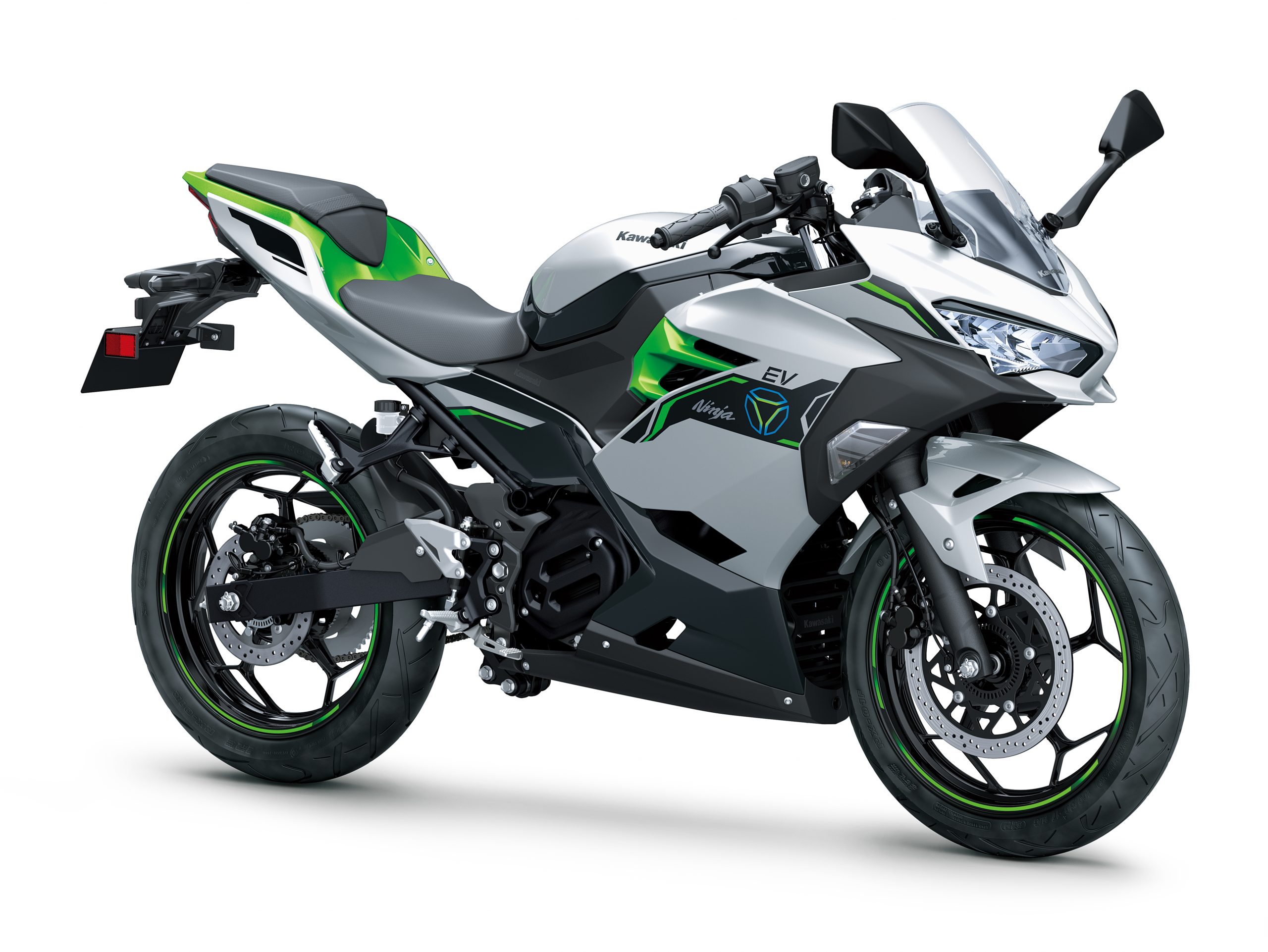 Kawasaki says that this one is also built to comply with A1 license regulations, so I wouldn’t expect much different performance from the naked Z. Put another way, these will have the performance of a 125cc, maybe 150cc motorcycle. As reported by Electrek, Kawasaki Motors president Hiroshi Ito seems to be positioning both motorcycles as commuters:

European A1 license compliant, they will bring exciting ‘good times’ to daily commuting. They each have a large battery capacity of up to 3.0 kWh with two 12 kg battery packs that are easily removable.

I love to read that these will have lightweight, removable battery packs. As of now, apartment dwellers with street parking cannot charge an electric car at home. But you could with a motorcycle with removable batteries. So it’s always awesome to see that a motorcycle manufacturer is thinking about how you will charge its bikes. 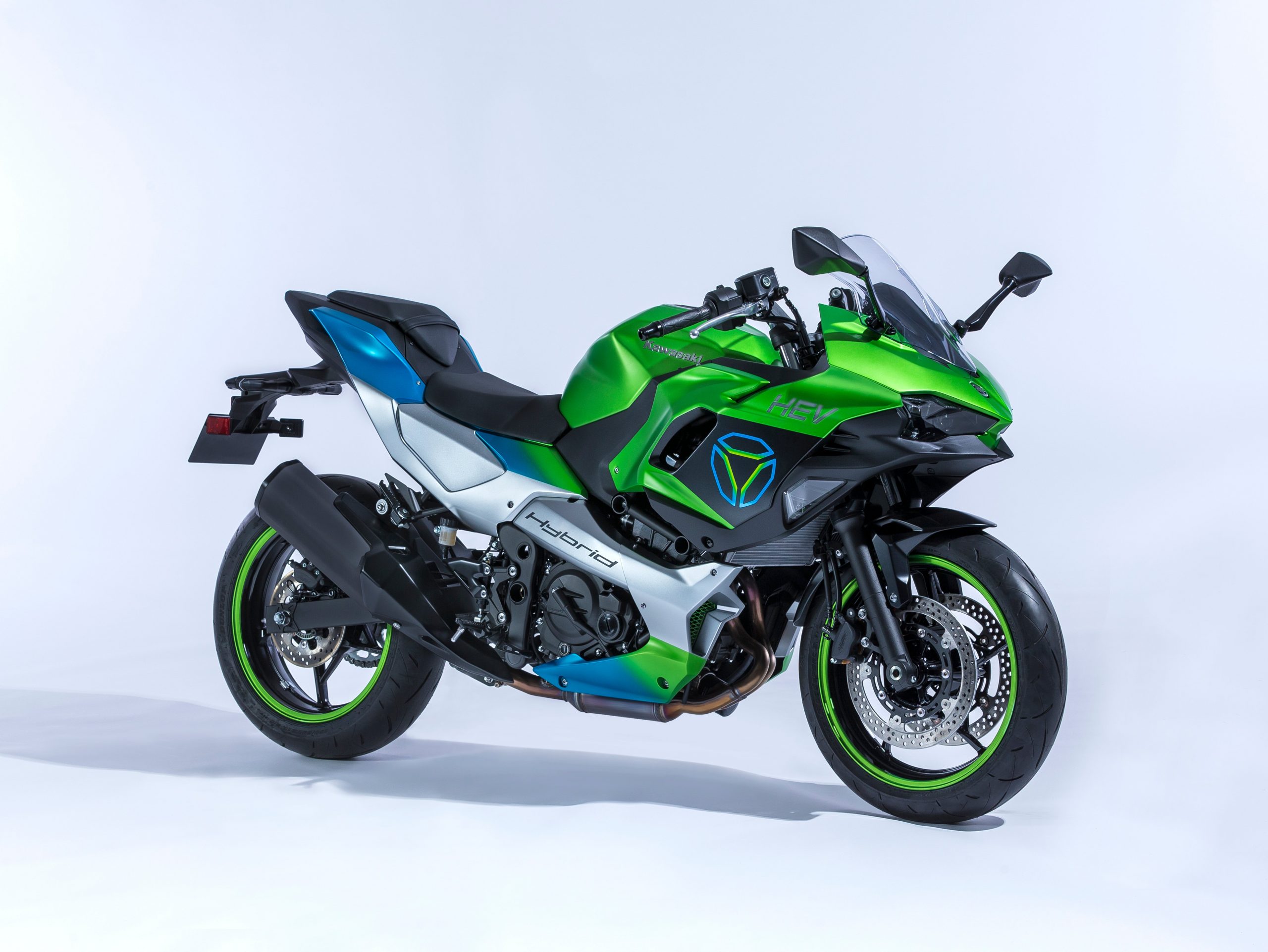 Next up is the Kawasaki Ninja HEV. This is a hybrid-electric motorcycle that Kawasaki plans on putting in your garage really soon. Kawasaki has been tight-lipped about specs, but describes operating parameters not unlike a Toyota Prius. The motorcycle’s gas engine can work with an electric motor for propulsion, just like a hybrid car. And there will be an EV mode, again, like a car. Eyeballing that engine, it looks like a roughly 400cc unit, but again, there’s nothing official on it.

This one has really caught my attention because it’s pretty novel in the motorcycle world. The automotive industry has enjoyed mass-market hybrids for more than two decades. You could walk into the dealerships of multiple brands and drive out with a hybrid. That hasn’t been the case for motorcycles. 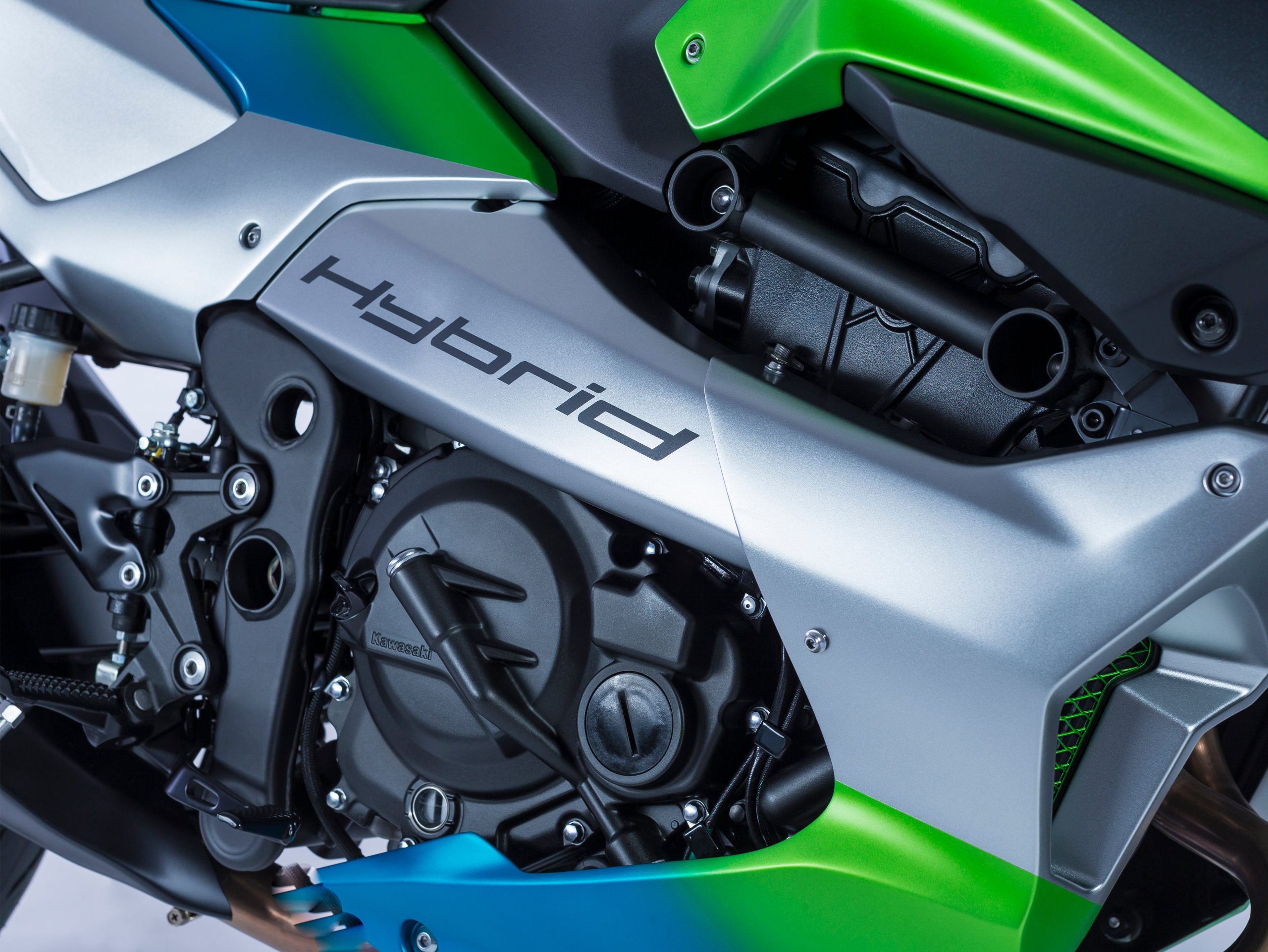 Back in 2009, Indian manufacturer Eko Vehicles claimed to invent the world’s first hybrid motorcycle. Its ET-120 was claimed to use a 70cc engine paired to an electric motor developed with U.S.-based Emerging Vehicle Technologies Inc. It reportedly got 282 mpg with help from a lead acid battery. While I could find spec sheets published online, I couldn’t find a single production example.

In 2019, Honda claimed the title for “the world’s first hybrid system for a mass-production motorcycle” with its PCX Hybrid scooter. This is something that motorcyclists can buy, and there are reviews for the thing. Honda designed the PCX Hybrid as a parallel hybrid, where a lithium-ion battery feeds what it calls the ACG starter, which both starts the gasoline engine and provides an assist:

Yamaha has a hybrid scooter, too. Though, like the Honda PCX Hybrid, you can’t buy it in the United States. This is to say that hybrid motorcycles are still pretty new, and Kawasaki’s interpretation isn’t being put into a scooter. Kawasaki first showed off the Kawasaki Ninja HEV in 2020, and it plans to put them into production in 2024.

I saved the weirdest for last. 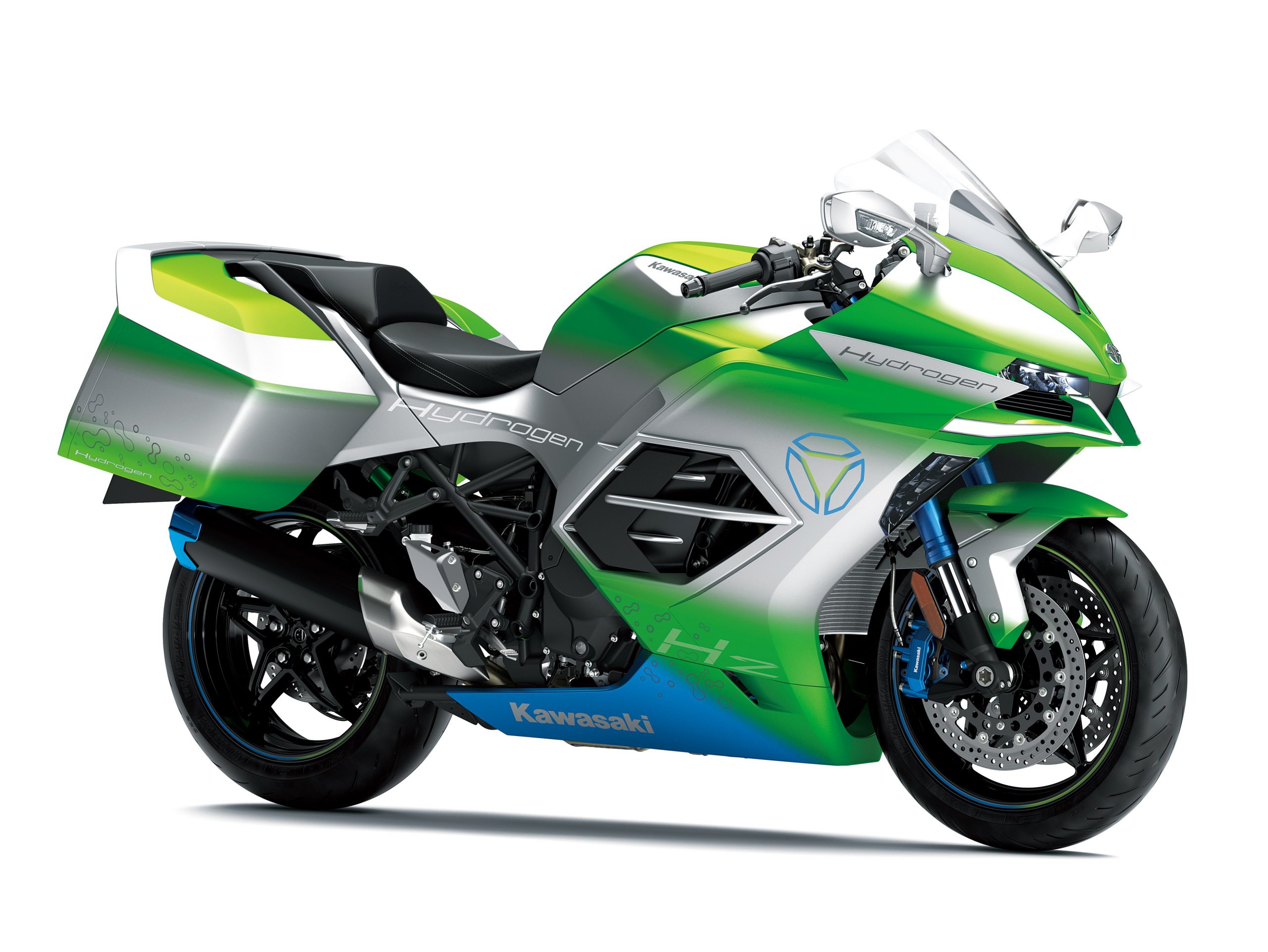 Kawasaki also rolled out its Hydrogen Motorcycle, a hydrogen-combustion sport-tourer. It’s based on the Ninja H2 SX, but with bodywork dialed back. That in itself is pretty neat, as the H2 SX is known for its supercharged 998cc inline four making 197 HP. Kawasaki hasn’t said much about this one, but its engine is said to be based on the H2’s, but running on direct-injected compressed gaseous hydrogen. 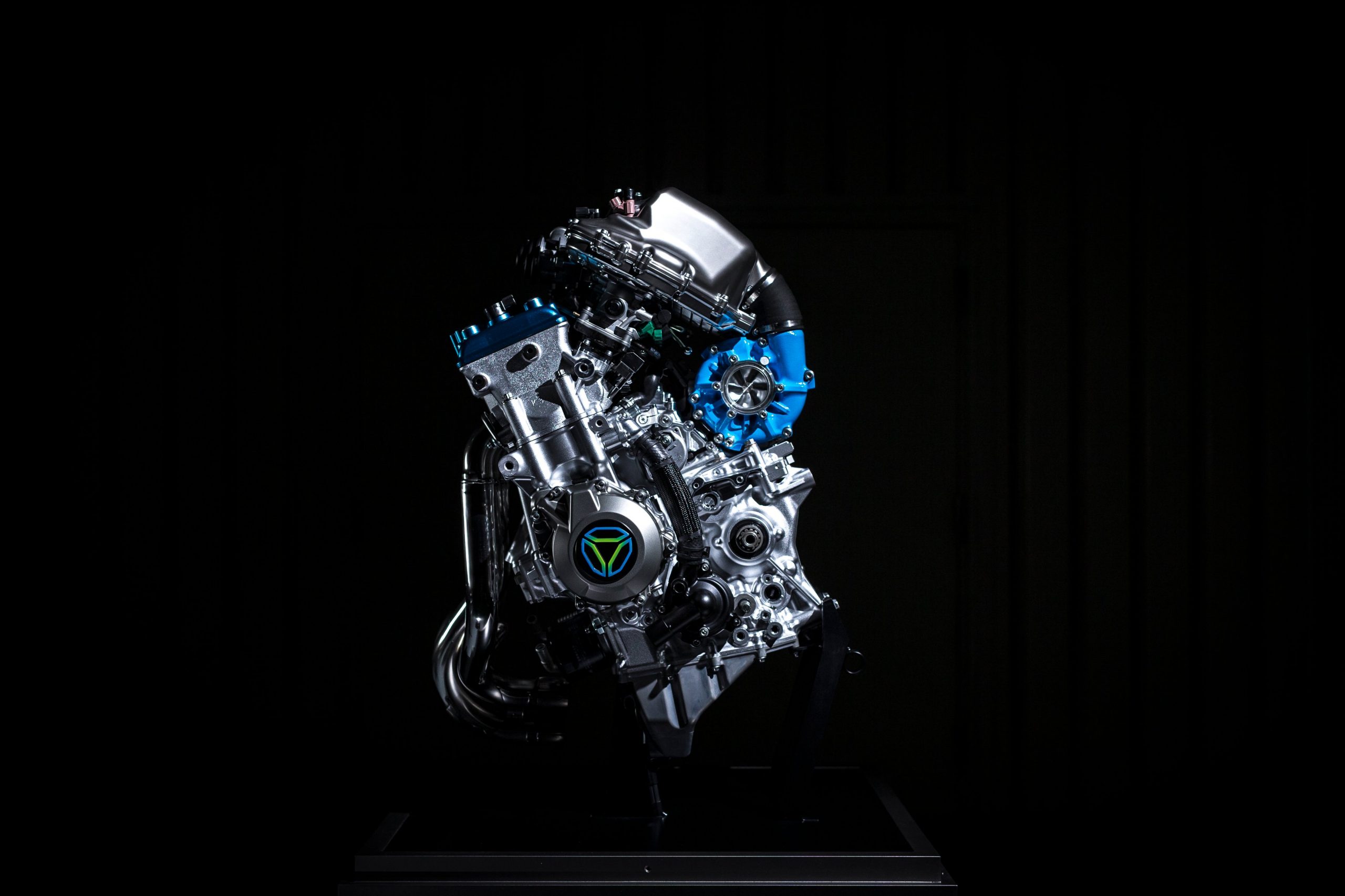 The Kawasaki Hydrogen Motorcycle is the only one without a provided production date, and given hydrogen’s failure to catch on in the States, I wouldn’t hold my breath on seeing it here. However, given recent news that Kawasaki and Toyota are joining efforts on hydrogen technology, it seems that Kawasaki is serious about this.

One thing’s for sure, Team Green has some exciting stuff in the works. The electric motorcycles seem like fine steeds to get around on, and that hybrid is genuinely amazing. And as further good news, these motorcycles appear to be coming to America. While Kawasaki has not officially announced markets or even prices for these new motorcycles, Kawasaki has filed two 2023 VINs with the National Highway Traffic Safety Administration that match the two electric motorcycles. If this isn’t a fluke, that means that soon, you’ll be able to buy a sporty electric commuter with removable batteries.

Mercedes is a lifelong fan of all things powered by an engine. When she isn't driving one of her five Smart Fortwos or her 14 other vehicles she could be found in the cockpit of a Cessna 172 or perhaps swimming in any body of water that she could find. She also has a deep love for buses of all kinds. Please send her buses. mercedes@theautopian.com Instagram: @mistymotors Twitter: @Miss_Mercedes30 Facebook.com/neonspinnazz
Read All My Posts »
PrevPreviousHere’s What Happened When I Confronted Volvo’s Head Designer About The Company’s Egregious Decision To Require A Touchscreen Button To Open The EX90’s Glovebox
NextWatch The Mercedes-AMG One Smash The Nürburgring Lap Record Under Apparently Seriously Sub-Optimal ConditionsNext