Today on Shitbox Showdown, we’ve got two of the same car, in the same color, for the same price, within a few miles of each other. The difference is that they’re one generation apart, and that makes all the difference in the world. We’ll get to them in a minute; first let’s see how our rarities did yesterday:

Well, it’s a little earlier than I usually call these, but I don’t think this tally is likely to change much. I personally don’t get the love for those AMC Eagle wagons [Editor’s Note: What’s there not to get?! I’m worried about you, Mark. -DT], but I know they do have their fans. (Now the SX/4 hatchback, that I understand.) Between the Eagle and that Mitsubishi van, I think I’d take the latter. But then, I’ve been looking curiously at small vans for a while now.

Shifting gears: Automotive styling went through a massive shift in the late 1980s and early 1990s, from boxy and angular to soft and rounded. Often, the new rounder cars were replacing a decade-old design, instantly making even a year-old car look ancient. I’m sure this did wonders for the resale value of those final-year-for-the-boxy-one cars. But now thirty years later, we find two comparable cars on either side of that generational gap, in roughly the same condition, for the same price. Which one is the better deal? Let’s take a look at them and then you can decide. 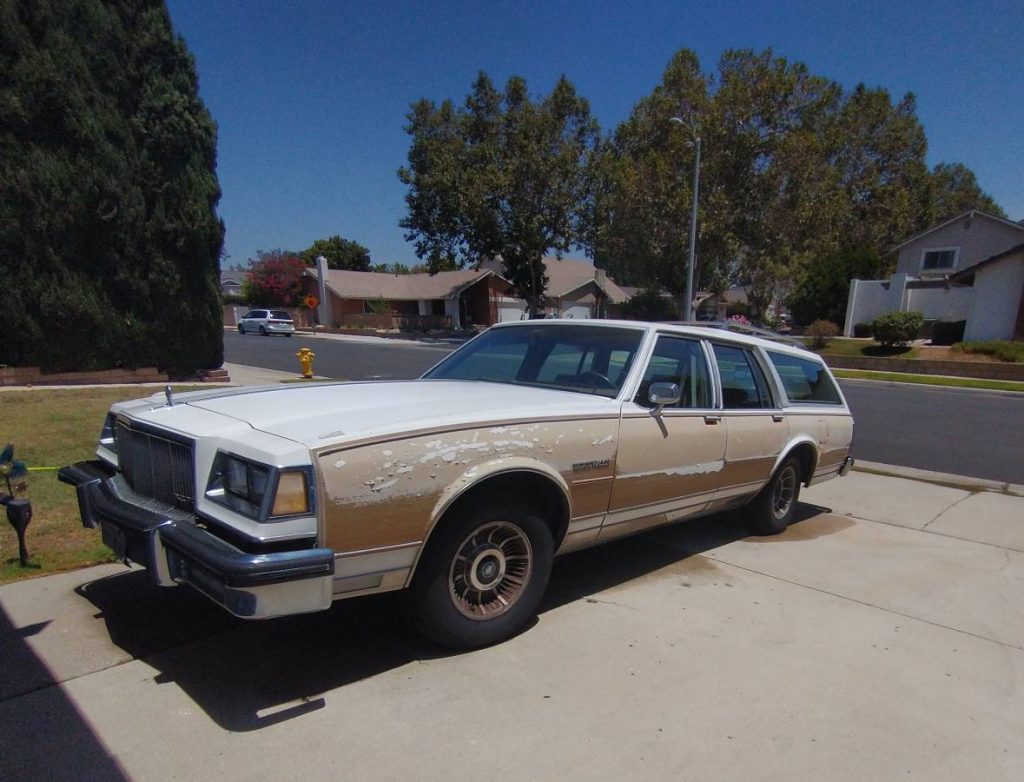 Runs/drives? “No issues” the seller says

GM’s full-size rear-wheel-drive B platform was all but retired after 1985, when most of the lineup went front-wheel-drive. Only the Chevy Caprice, the Cadillac Fleetwood, and the station wagons soldiered on as traditional RWD body-on-frame cars. By 1990, when this Buick was built, this body style had been in production for thirteen years, and it looked wildly out-of-place among newer designs. 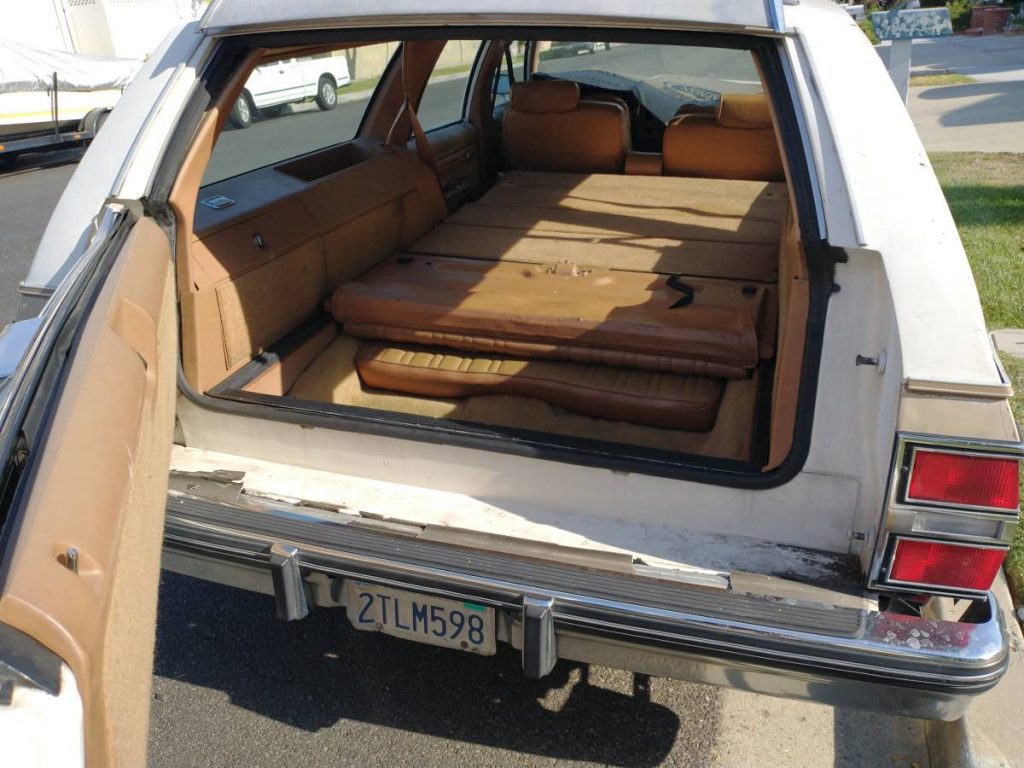 By this time, Buick’s own 350 cubic inch V8 had been ditched, so this Estate is powered by an Oldsmobile engine, specifically a 307 equipped with a Quadrajet four-barrel carburetor. It’s a smooth, low-revving torque monster, perfect for a big people-mover like this. It spins a TH200-4R four-speed overdrive automatic — not the biggest gun in GM’s transmission arsenal, but it gets the job done. The Estate is an eight-passenger wagon, with a rear-facing “way back” jump-seat and a tailgate that can either open downward pickup truck-style, or swing to the side like a normal door. 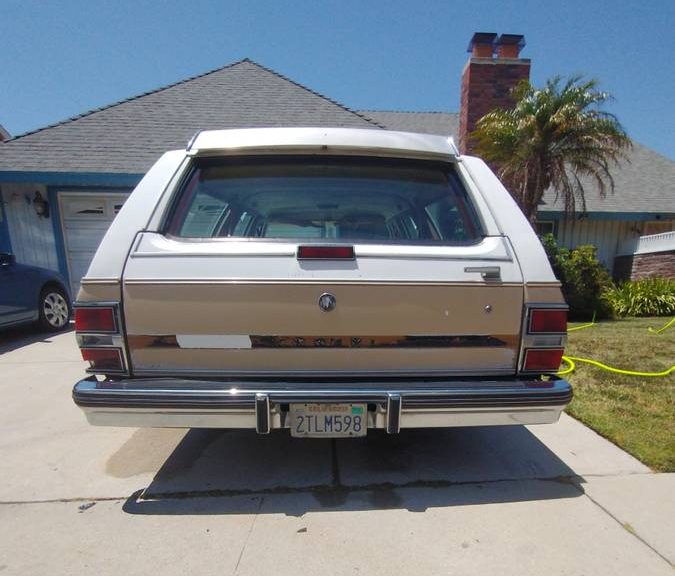 The seller says this old wagon runs well and recently passed a smog inspection, but doesn’t give much more information. They say it has a dent in the right front fender, but no photo is included. What the photos do show is sun damage to the fake woodgrain paneling; the California sun hasn’t done it any favors over the years. We only get one interior shot too, and it’s of the back seat; if the seams are split there, I imagine the front bench is in similar shape if not worse. 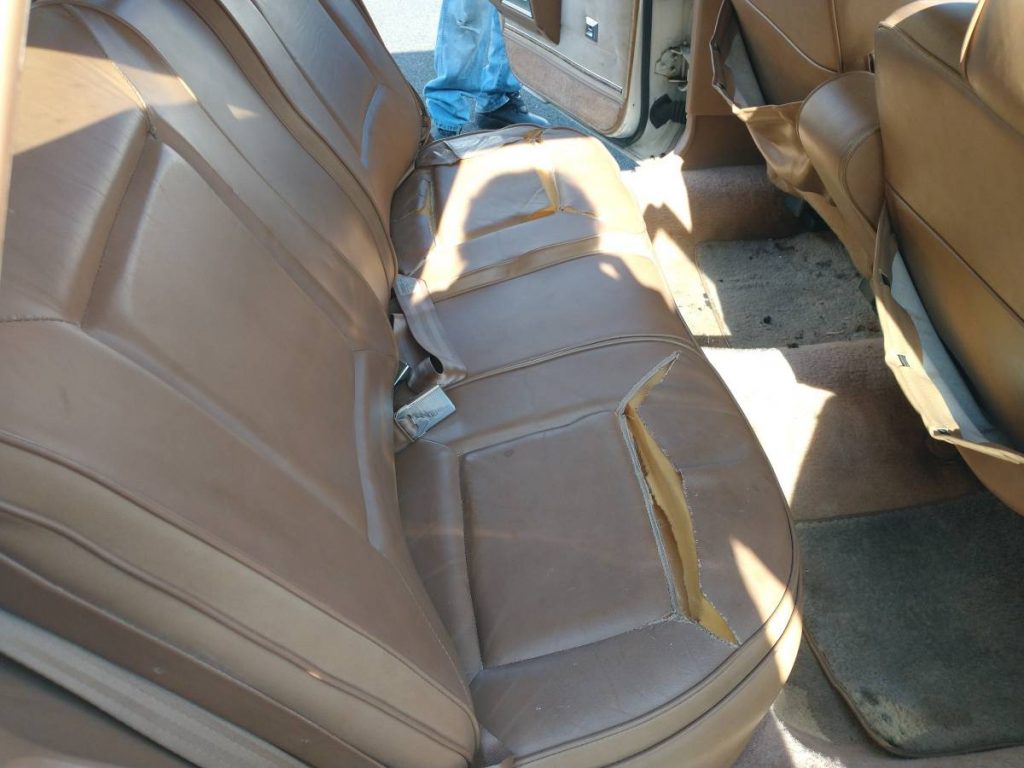 Scruffy condition aside, I kinda like this big oaf. It looks comfy and friendly, and reminds me of any of a number of cars I rode in as a kid. It may have been a dinosaur when it was new, and a fossil now, but it does have its charms. 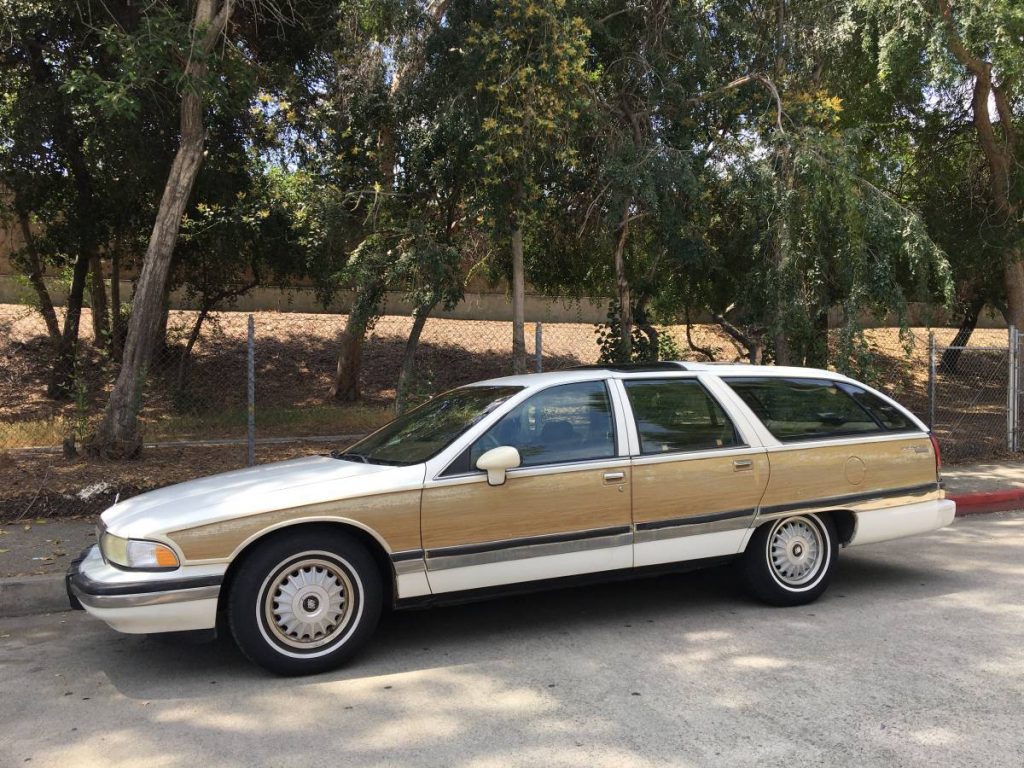 One year later, a new B-body was introduced, bringing a sedan back to the Buick lineup under the Roadmaster model name. The new Estate wagon inherited this title as well, becoming the Roadmaster Estate. This car looks substantially bigger than the earlier square car, but it’s actually a couple inches shorter, though a bit wider. 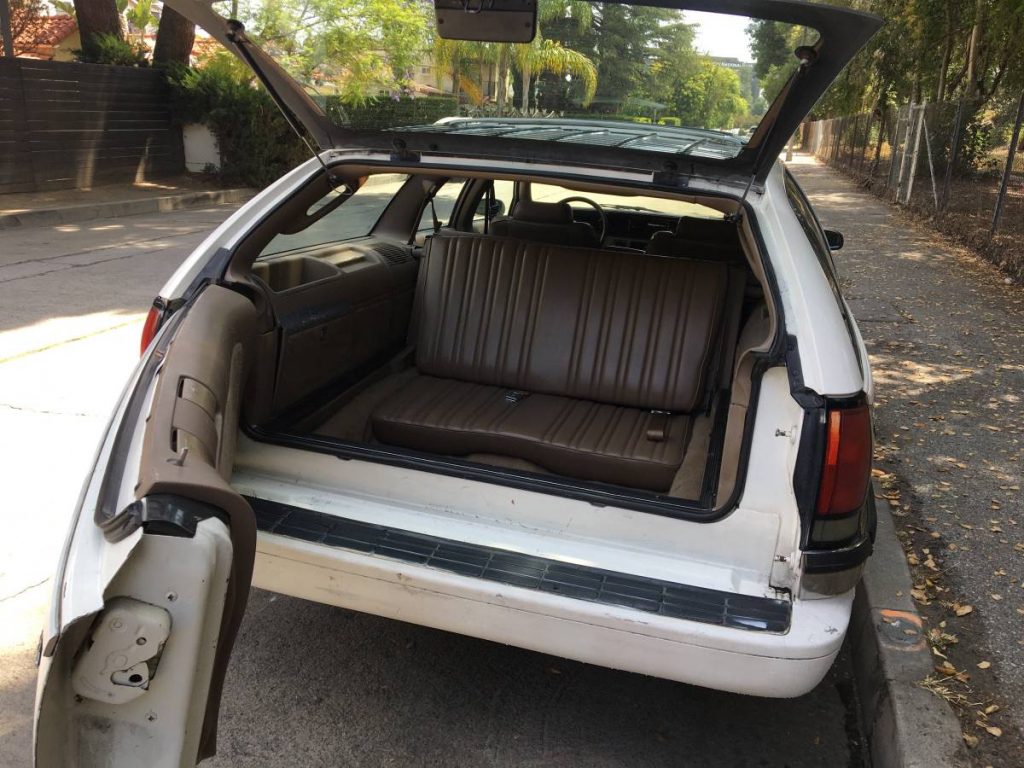 Mechanically, the new car was largely an evolution of the old, but the Oldsmobile V8 was retired in favor of the ubiquitous Chevy small block, here in classic 350 cubic inch displacement. Sadly, this particular Roadmaster is one year too old to have the engine everyone wants – the 260 horsepower LT1; instead, it makes do with 180 horsepower from a “regular” 350. 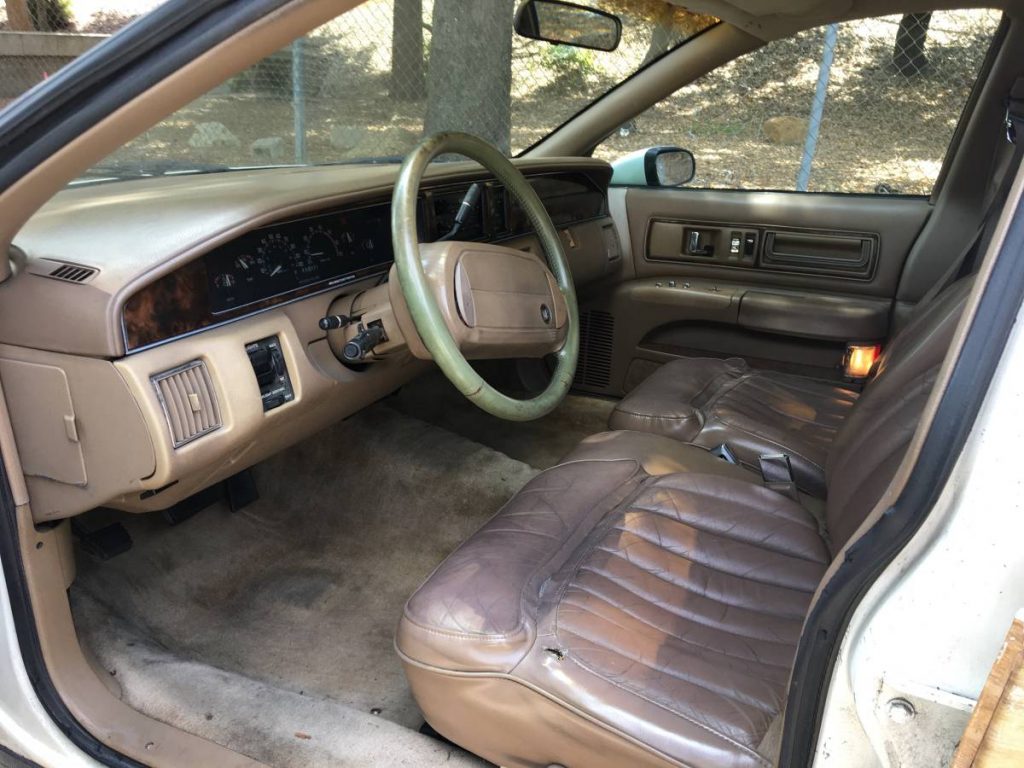 This old wagon is nearly as scuffy as the square one, but in my opinion it doesn’t wear its age as well. Something about the newer shape makes it look older than the more seasoned one, even with similar wear and tear. But refinements like fuel injection, an electronically-controlled 4L60-E transmission, and aerodynamic improvements do make it a quieter, more efficient ride on the highway. The seller says it runs fine, but again, no other information is given. A careful going-over is in order, I think, before purchase. 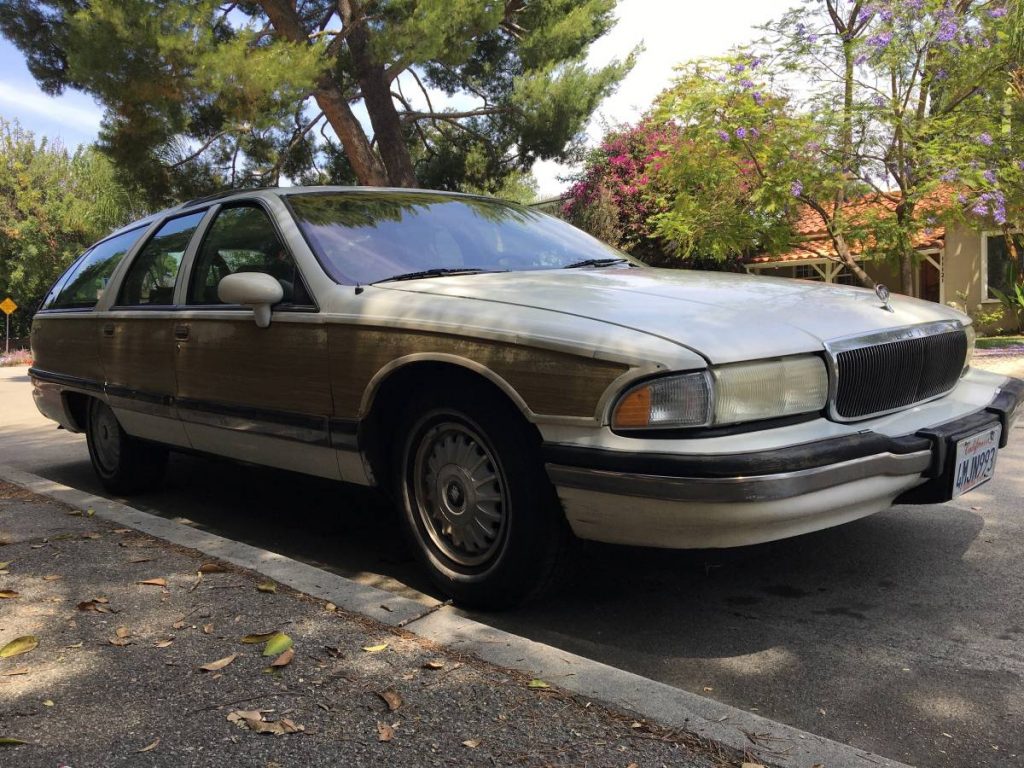 I wondered in the past how well the fake woodgrain on these wagons would age, and I guess I have my answer: not well at all. The polycarbonate headlight lenses don’t look so great either; some polishing is necessary. Still, the Roadmaster Estate has a presence that’s hard to ignore. [Editor’s Note: I’ve always thought that squared-off cars tend to wear fake wood trim better than round cars, but in this case, I think the newer Roadmaster looks just as good with the vinyl. What do you think? -DT].

So there you have it – two old Buick wagons, almost the same, but worlds apart. It’s amazing how much difference a generation can make. Whether it’s an improvement or just a change is up to you.