Welcome back! Today we’re looking at a couple of rare vehicles, neither of which is ready for the open road. But they’re both interesting enough to be granted a second chance, I think. First, let’s see which German drop-top you picked:

Yep. Right there with you. That Audi scares me. It looks nice, but I know looks can be deceiving. Besides, I cut my teeth on Mk1/2 watercooled VWs, and I still have a soft spot for them. Rabbit it is. It sounds like the title issue could be resolved with a death certificate and a trip to the DMV anyway.

Today, we’ve got a couple of vehicles that weren’t cool at all when they were new. They may not be cool now either, but they’ll certainly turn heads, as neither of them has been seen on the average US road for years. Both of these will take some work before they can be put back on the road, too. Let’s take a look. 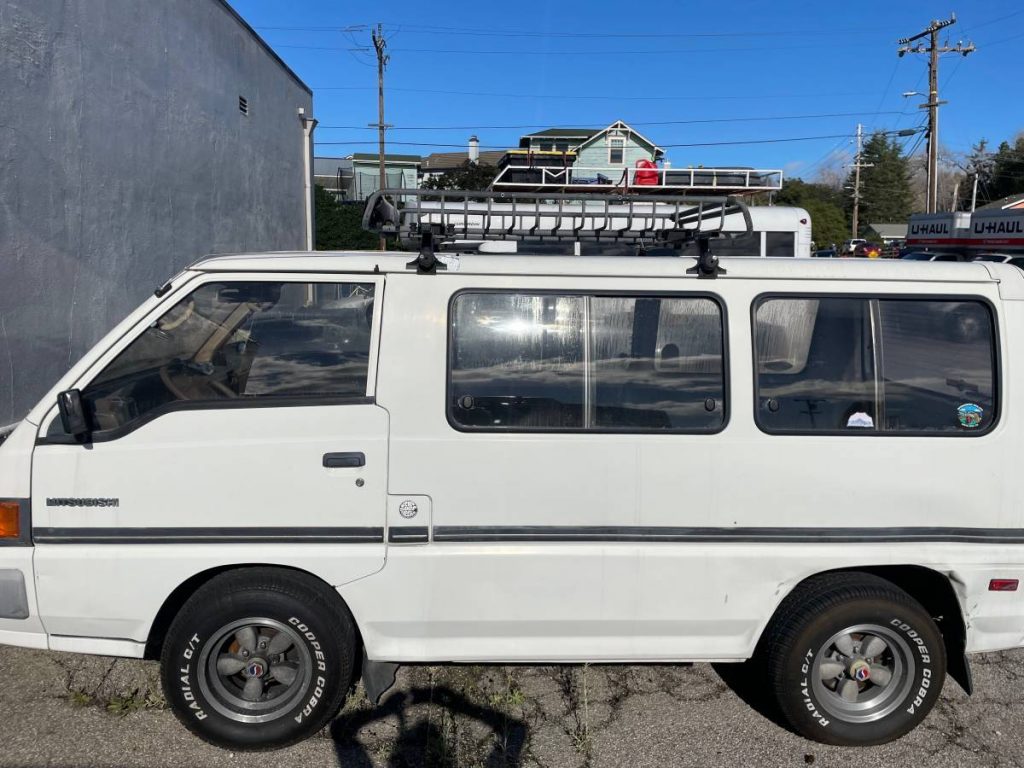 You may have noticed that importing cars from Japan has become kind of a thing. And certain cars have become especially popular choices to import. Once such vehicle is the Mitsubishi Delica, a cab-over-engine van that was (and is) common all over Asia. These vans have become popular as imports with the overlanding/van life crowd, because of their practicality, durability, and available four-wheel-drive. But for four years, America got its own version of the Delica, known simply as the Mitsubishi Wagon (if it had seats and windows) or Mitsubishi Van (if it didn’t). 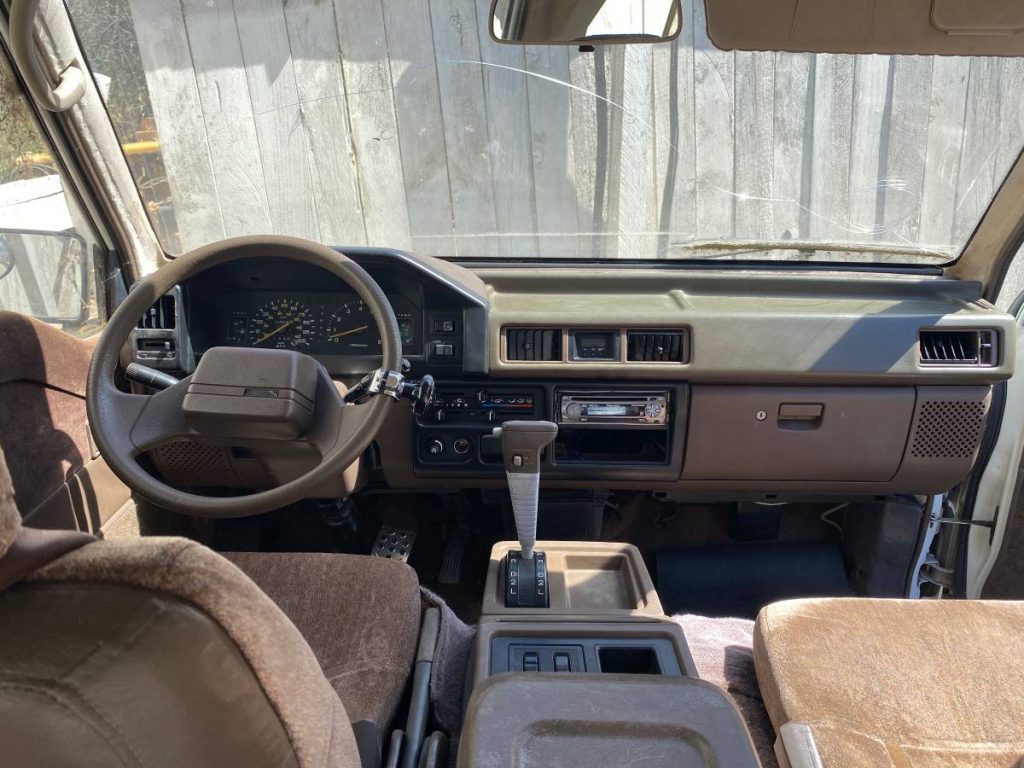 All the Mitsubishi vans that came to the US through official channels, as far as I can tell, were two-wheel-drive, powered by a 2.4 liter gasoline four and an overdrive automatic. Like the more popular Toyota vans, the engine is accessed by lifting up the seats and center console. This is enough room for basic maintenance, but major repairs require some serious disassembly. 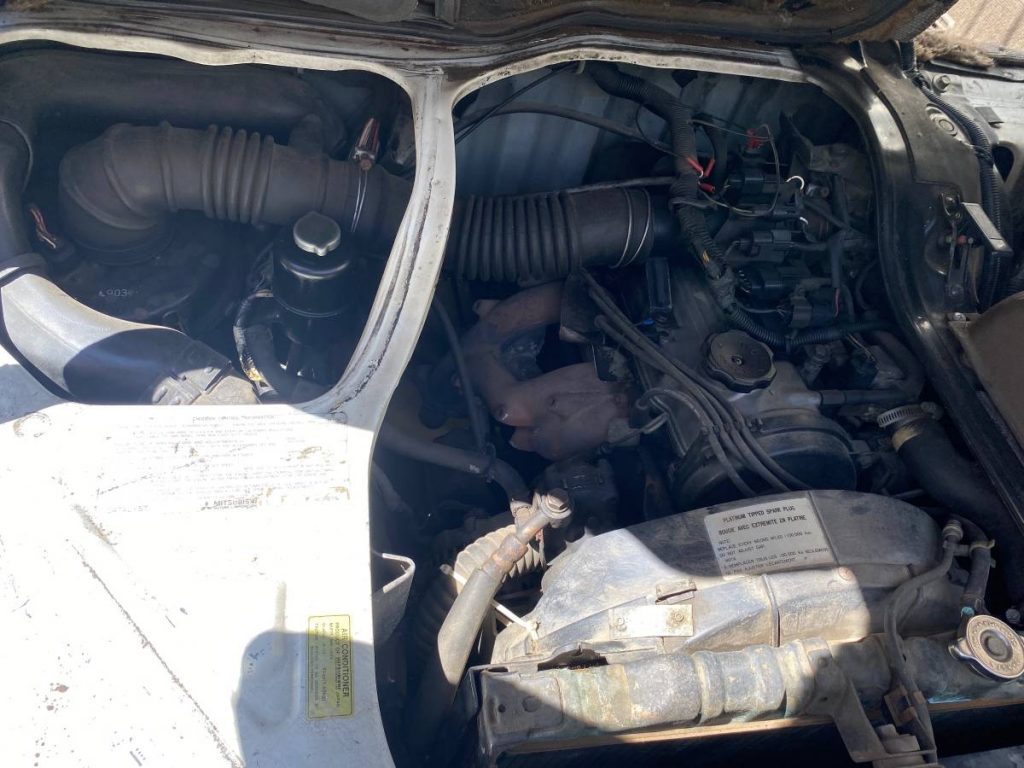 This van may or may not need major repairs. It does start and run, but dies if you take your foot off the gas. The seller thinks it might need a fuel injector replaced. But it has been sitting for a long time, so it might just need cleaning. The fact that it starts is encouraging, but it’s only half the battle. 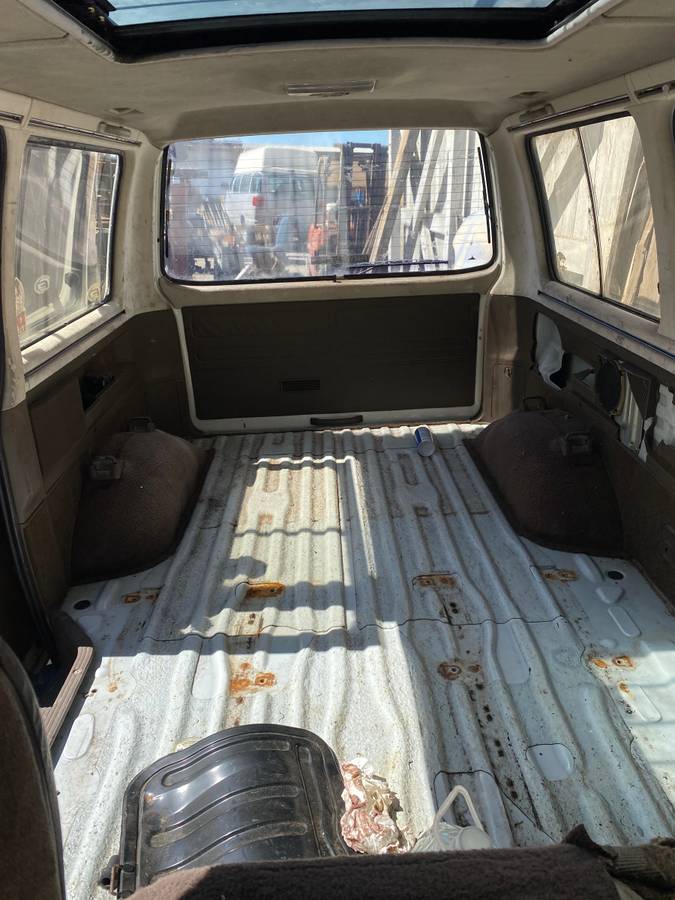 The rest of the van needs a little help. Outisde it’s a little beat-up here and there, but presentable, and I have to say I love the choice of wheels and tires on it. Inside things aren’t quite as nice: Apparently the sunroof leaks. The front cab area is fine, but everything behind the seats was trashed and has been stripped out. Which I guess means if you’re doing a camper conversion, it has already been started. 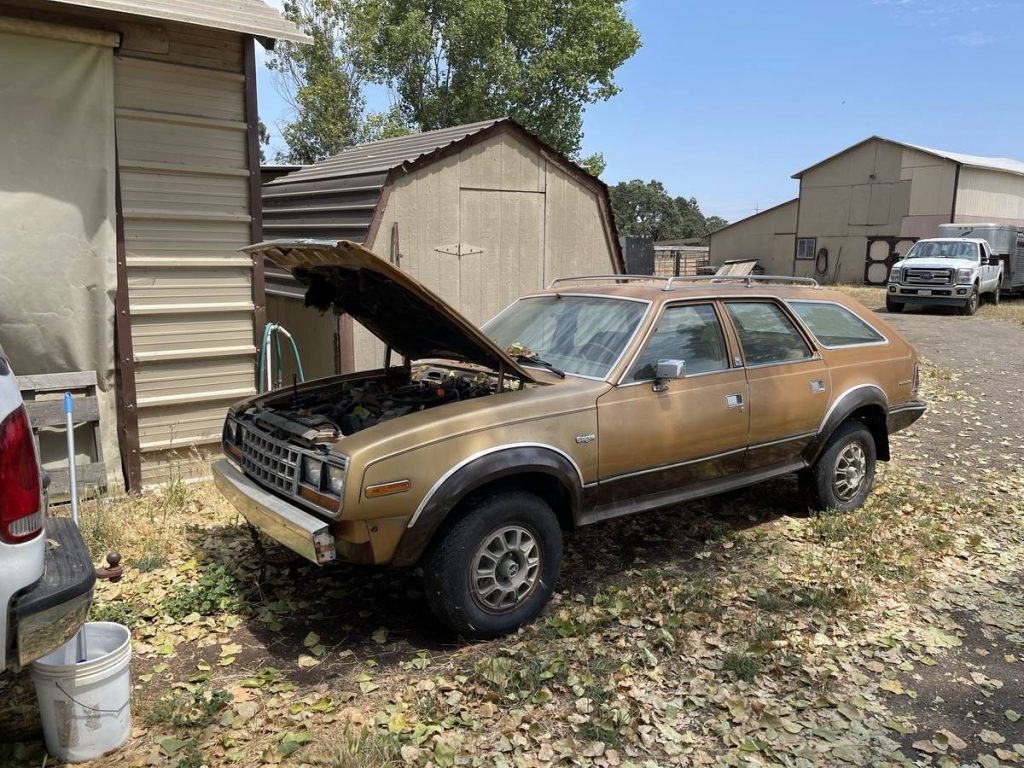 Runs/drives? Not since Clinton was elected

In th mid-1990s, when Subaru introduced the Outback with those silly Paul Hogan commercials calling it “the world’s first sport-utility wagon,” the first thing I thought of was the AMC Eagle. Produced from 1980 to 1988 when Chrysler took over AMC and killed off everything but Jeep, the Eagle beat Subaru to the punch by a decade and a half. 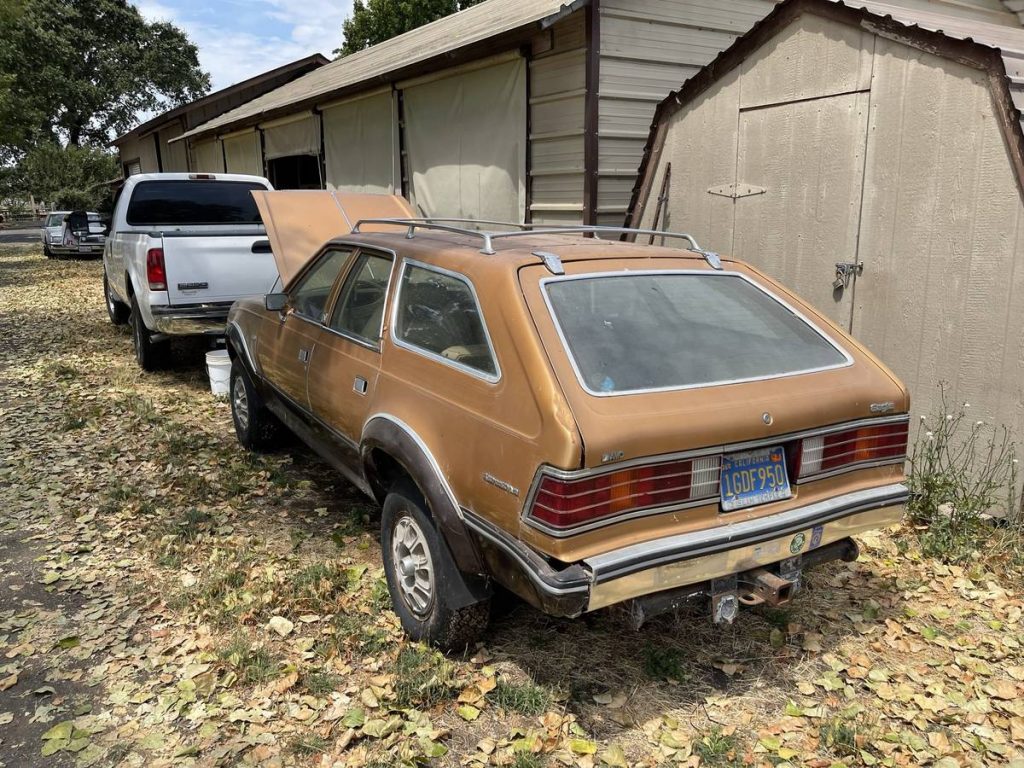 Just as the Outback started out as a jacked-up Subaru Legacy, the Eagle was based on AMC’s Concord, which in turn was an evolution of the AMC Hornet. The Eagle was already kind of an old car even when it was brand-new. Originally all Eagles were full-time 4WD, but starting in 1982 the front axle could be disconnected for rear wheel drive only, to improve fuel economy. A five-speed manual also became available, and this car is so equipped. AMC’s good old 258 cubic inch inline six provides the power. 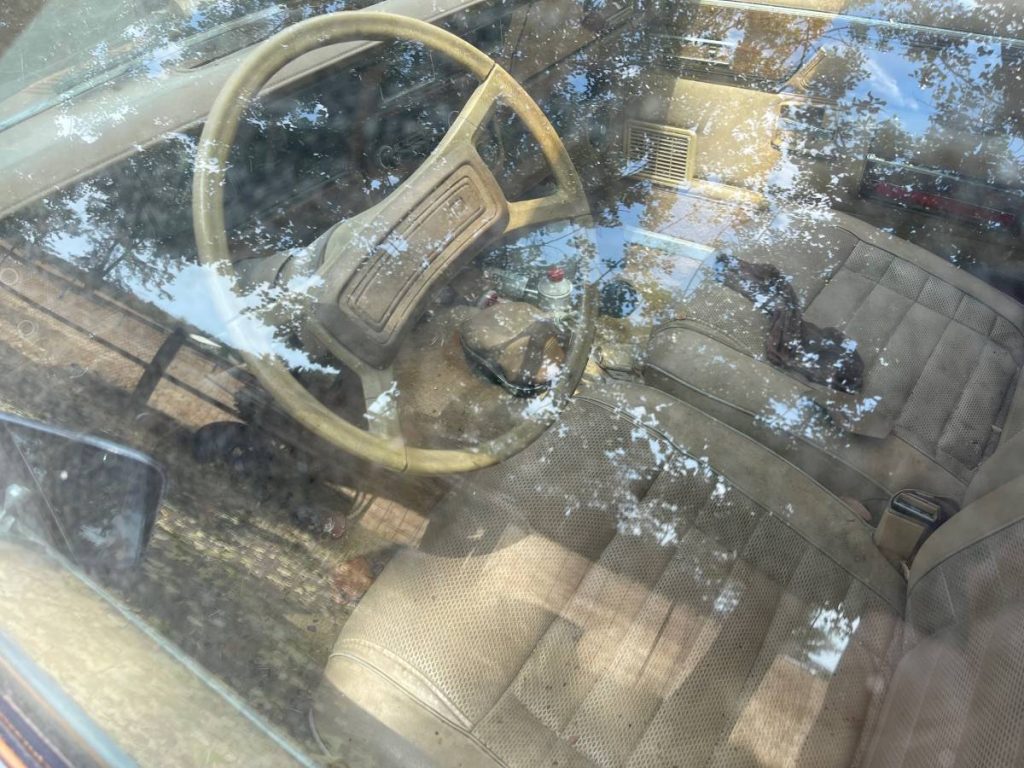 This Eagle has been pulling a Rip Van Winkle for three decades now; the last time it was registered was 1992. The seller thinks the brakes went out, which led to the car being parked. Plan on taking some time to carefully revive it, and replacing a ton of rubber parts and maybe some other things. And based on David’s recent experience, it would be wise to try to turn the engine over by hand before handing over any money. 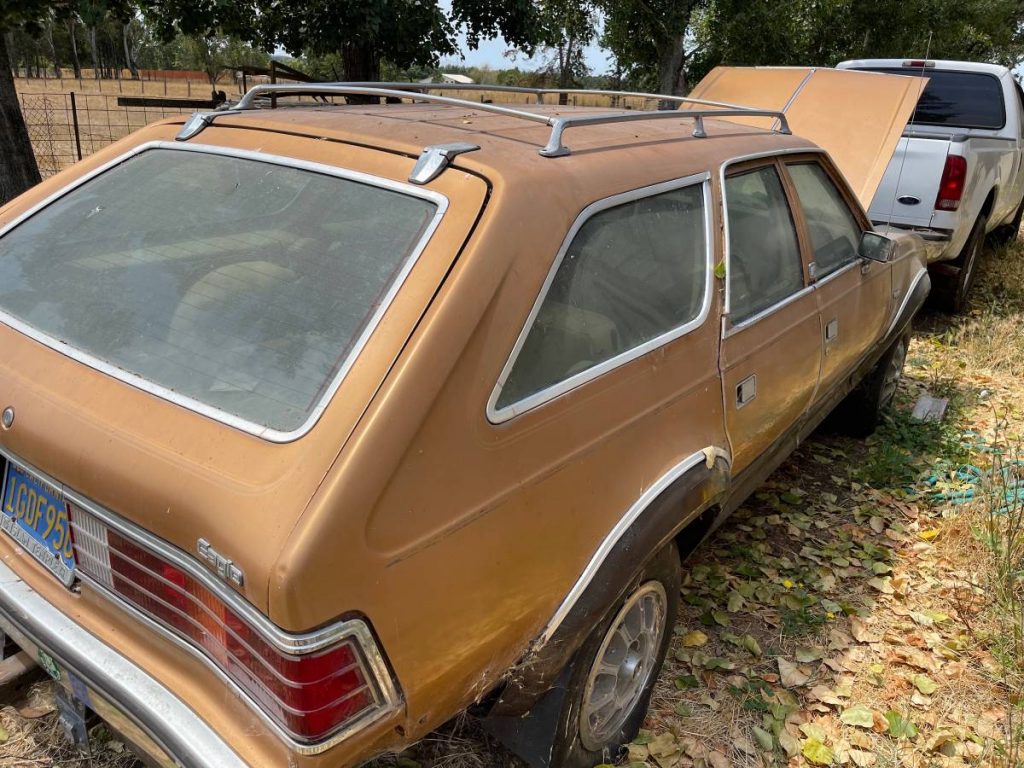 The rest of the car looks all right; I’m guessing that it was stored inside during its long sleep. There’s no rust visible, the paint isn’t faded, and what we can see of the interior through the window looks decent (seriously, you couldn’t open the damn door for a sec?). These cars have a bit of a following, so it’s likely someone will want to pick this up as a project. The five-speed manual can’t be too common in these.

Reviving a car that has been dormant for a long time takes time, and it’s always more work than you think. You have to love the car to put in the work. Are either of these two lovable enough? If so, which one?