Happy Monday morning to you all! Today we’re going to look at a pair of German convertibles that are either killer deals or wallet-killers, depending on your perspective. But before we get there, let’s see who won Friday’s ute battle:

Yeah, I think I’m with you. Generally I’d prefer the El Camino, but if it’s that Ranchero versus that El Camino, then the little white truck is the better choice.

Now then: When you think of fun-in-the-sun open-air motoring, I know the first country that comes to mind is Germany. I mean, it never rains there, and the Germans are so well-known for their easygoing carefree spirit that of course convertibles are going to be their car of choice.

OK, yeah, not so much. But they have become adept at lopping the tops off their cars and making them more fun and appealing to us Americans. Today we’re going to look at two of them, one older and one newer. Both of them run, both of them look reasonably watertight, and neither will suffer casual maintenance or lackadaisical owners gladly, but either could be a good source of some cheap open-air thrills. And take it from someone who drove a convertible for eight years: October and May are the best months for top-down motoring, so you’ve still got some time left on the season. Let’s get into them and see what they have to offer. 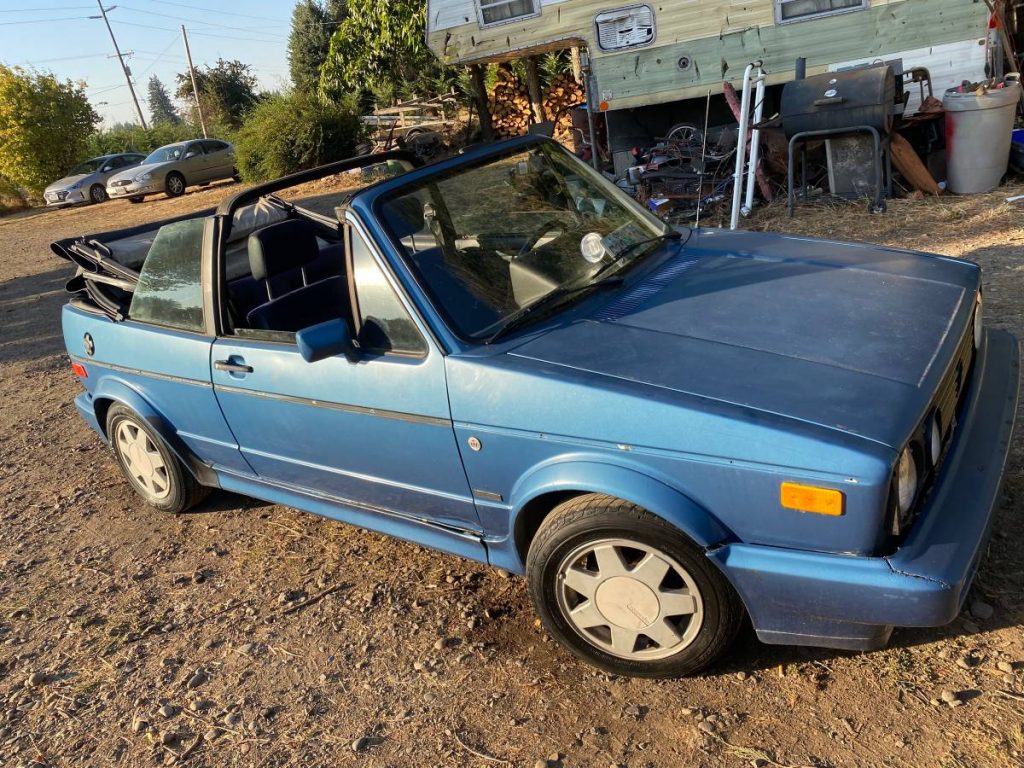 Volkswagen has a long history of making convertibles from their bread-and-butter cars; the Beetle was offered as a drop-top throughout most of its long run. The Golf was offered as a converible for several generations, but the convertible skipped generations – there never was a Mk2 or Mk4 Golf cabriolet; the Mk1 and Mk3 bodystyles handled convertible duties through the even-numbered runs. That’s why this 1990 model still looks like a Rabbit, even though it was six years into the Mk2 Golf run. 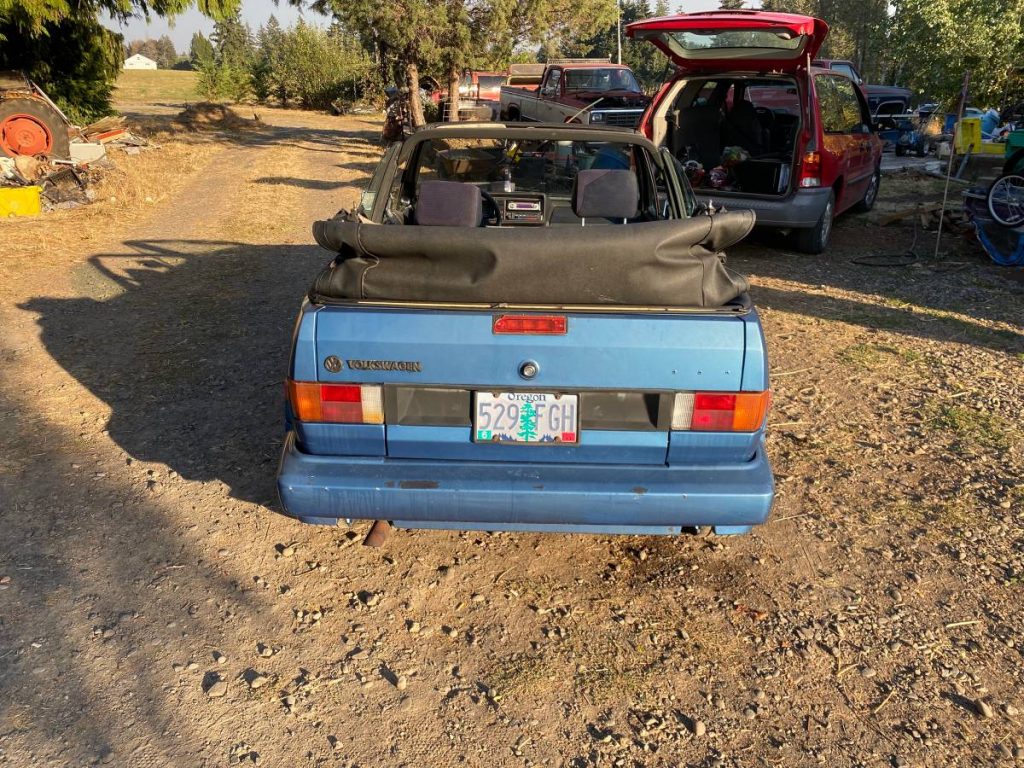 This car was built by Karmann Coachworks, using mechanical components supplied by Volkswagen. Karmann’s body design isn’t quite a full convertible, retaining the B-pillars and a “basket handle” roll bar to keep some structural rigidity and safety. The top is insulated and has a glass rear window, making the Cabrio a little less “convertible-y” with the top up than some others. It’s manually-operated, so no worries about failing motors. 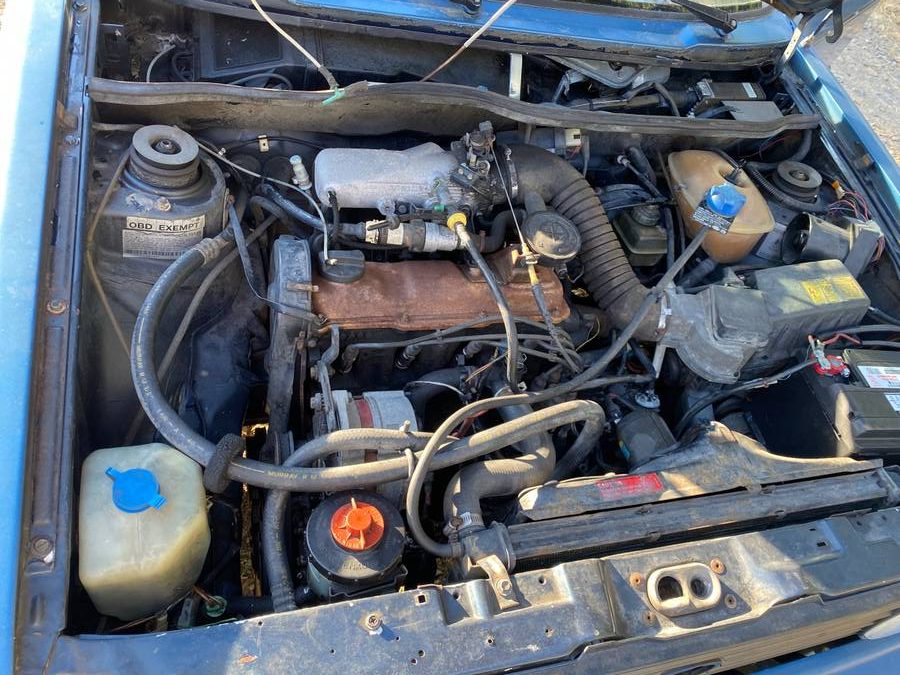 Mechanically, this car is standard-issue early watercooled VW, with a 1.8 liter version of VW’s long-lived EA827 engine. It’s fuel-injected, easy to work on, and generally reliable; I’ve always liked this motor. Here it’s backed by a five-speed manual, as it should be. 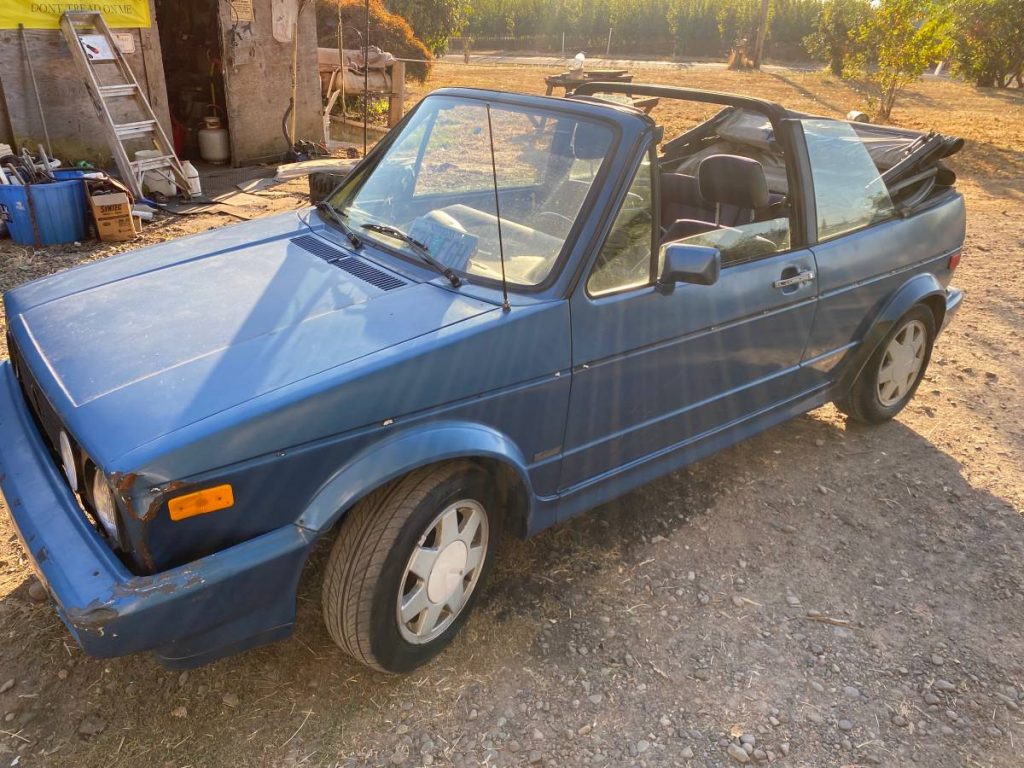 This particular Cabrio is a little beat-up, and the seller says the title is lost, so that will have to be sorted out. But it runs and drives well, and the air conditioning works for those summer days when it’s just too hot to have the top down. 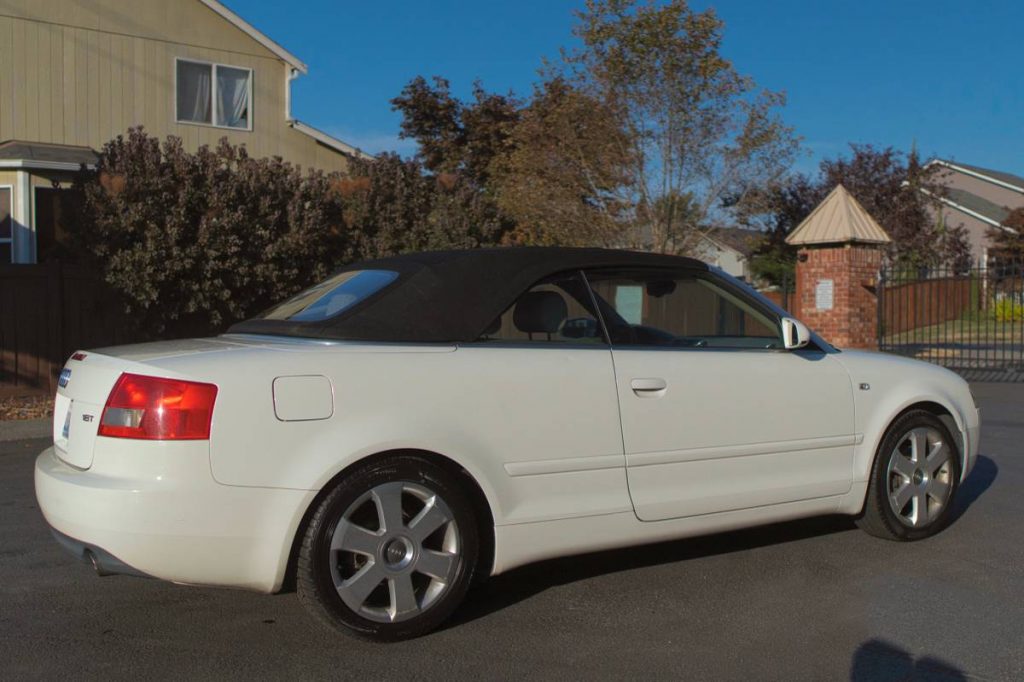 Runs/drives? It does indeed!

Audi’s A4 isn’t an uncommon sight at the bottom end of the car market. A combination of high maintenance needs, fragility, and abusive second or third owners makes for a lot of cheap A4s. What isn’t seen very often is the A4 Cabriolet, the two-door drop-top variant. It wasn’t a common car to begin with, and honestly, until I saw this one for sale, I kind of forgot it even existed. 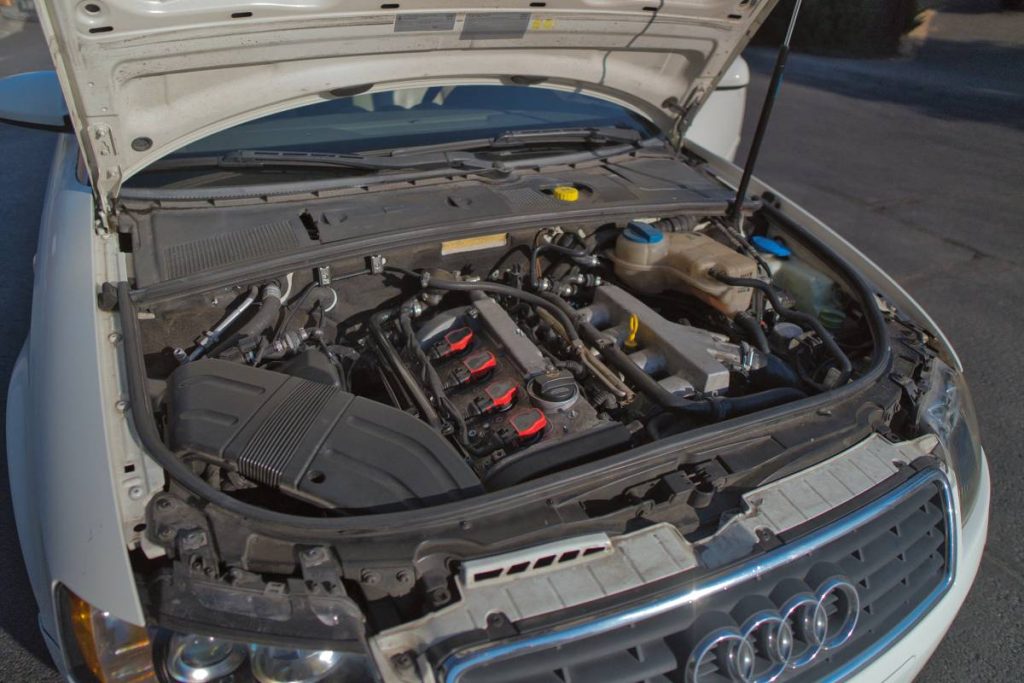 This A4 is powered by a 1.8 liter turbocharged four, with 5 valves per cylinder and variable valve timing. This engine’s reputation precedes it: Oil sludge problems, coil pack failures, and water pump failures are common issues. But it’s also praised for its power and tuneability. In the front-wheel-drive A4, it sends that power through a continuously-variable transmission. The CVT has its own set of potential pitfalls, mostly electronic issues. The seller says this one runs and drives fine, but the engine has a coolant leak from somewhere. 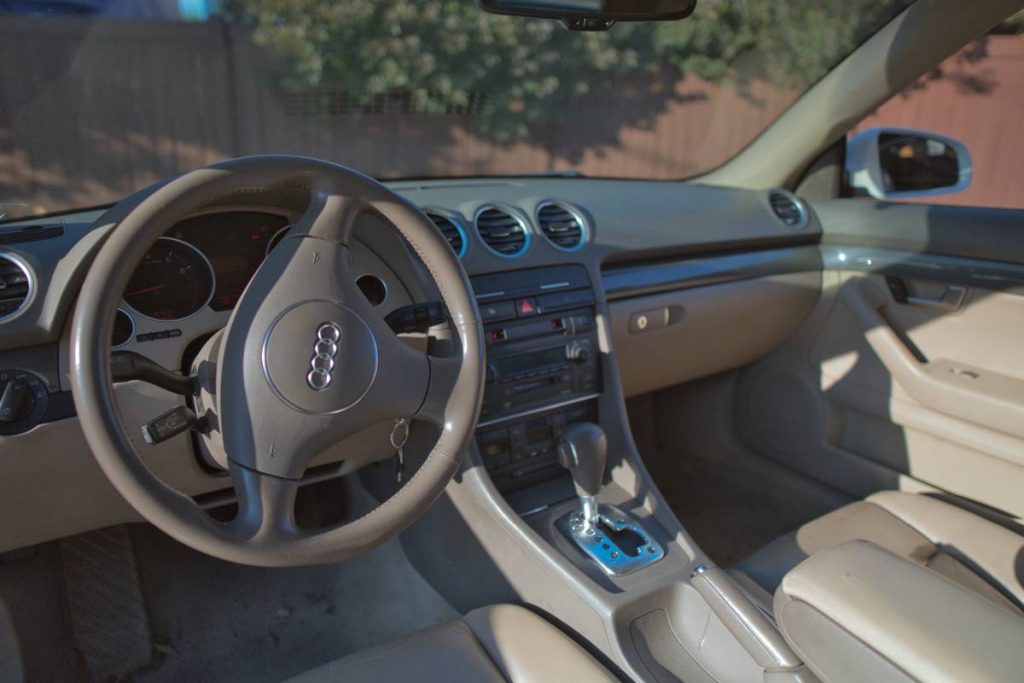 Other problems with this car include inoperative air conditioning, something screwy with the top mechanism (it opens fine but need some help to close, it sounds like) and several rips and tears in the leather upholstery, including in the back seat. It looks nice and clean outside though, and the top is said to be leak-free.

This is one of those cars without a purpose, to some degree: it isn’t luxurious, it isn’t sporty, it isn’t practical, and it isn’t economical. But it is cheap, which counts for a lot around these parts.

I really want to make some sort of “topless German” joke to wrap this up, but I’m just not finding it. So just pretend I wrote something really witty, and if you find the perfect joke that is eluding me, feel free to post it in the comments.