Good morning! Today we have another pair of cars with nothing in common. (I mean, not nothing; they both have four wheels, and run on gasoline, and all that, but you know.) But first, let’s check in on yesterday’s results:

Close one, as expected. But it looks like the Ford has the edge this time. I’d have trouble making this call, but since the Ford is local to me, I guess it wins by default.

Now, before we get started today, I need to make an announcement: This will be my last Shitbox Showdown for a while. I have some personal family-type stuff I need to take care of, and sometimes there is something more important than bullshitting about old cars on the internet. (No, really; there is.) So I am taking a brief hiatus from writing every day. How long? I don’t know, but probably at least through December. I’m not sure whether the plan is to put the Showdown on hold, or have someone else take over, but either way, I want to thank you all for reading, and assure you that like my fellow UW-Superior alum Ah-nold: I’ll be back.

So, once more, with feeling: 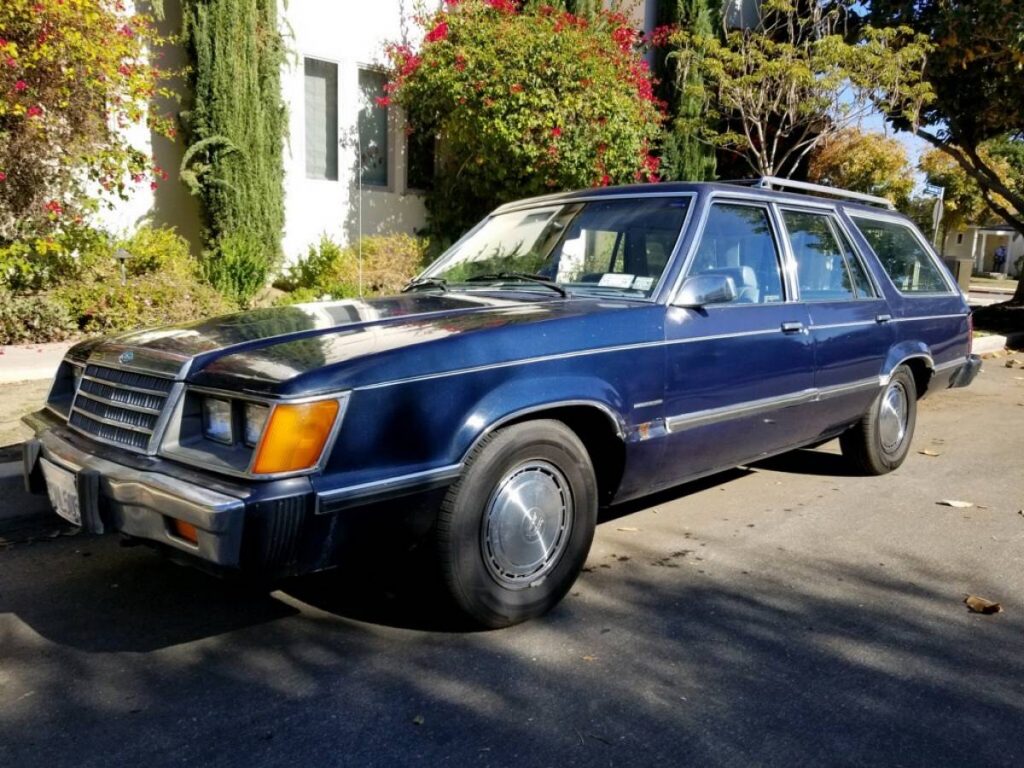 Platform-sharing is common practice among automakers, and with good reason: it allows development costs to be spread out over lots of different models. The same underpinnings can be used for sedans, wagons, sporty coupes, and more. In the ’80s, Chrysler caught some flak for the K platform and all its various guises, but Ford had already been doing the same thing with their unibody Fox platform for a couple years by then. The Fox served as the basis for the Fairmont, Granada, Mustang, Thunderbird, and this car, the LTD – not to be confused with the LTD Crown Victoria, which was on the larger, body-on-frame Panther platform – as well as all their Mercury twins. 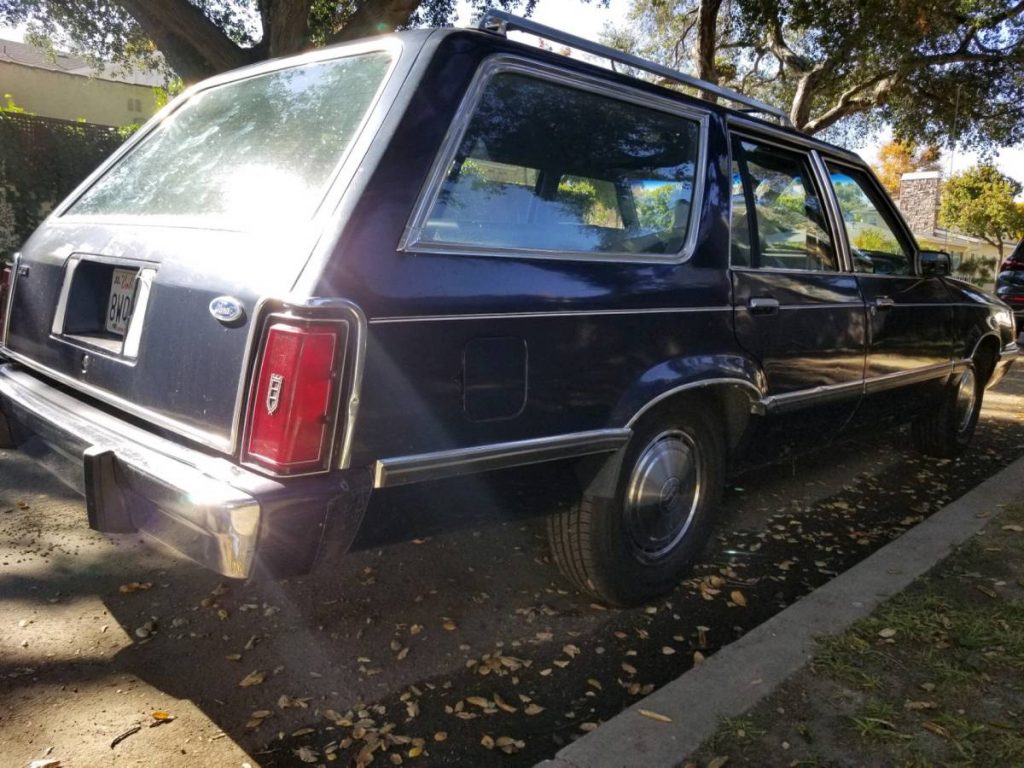 The seller doesn’t specify what engine is in this LTD, but the most common would have been a 3.8 liter “Essex” V6. Ford’s 2.3 liter four was also offered, but I’ve never seen a wagon with the four, and I can’t imagine anyone would want one. It’s a sluggish car with the V6; with the 2.3 it probably can’t even get out of its own way, especially with an automatic. 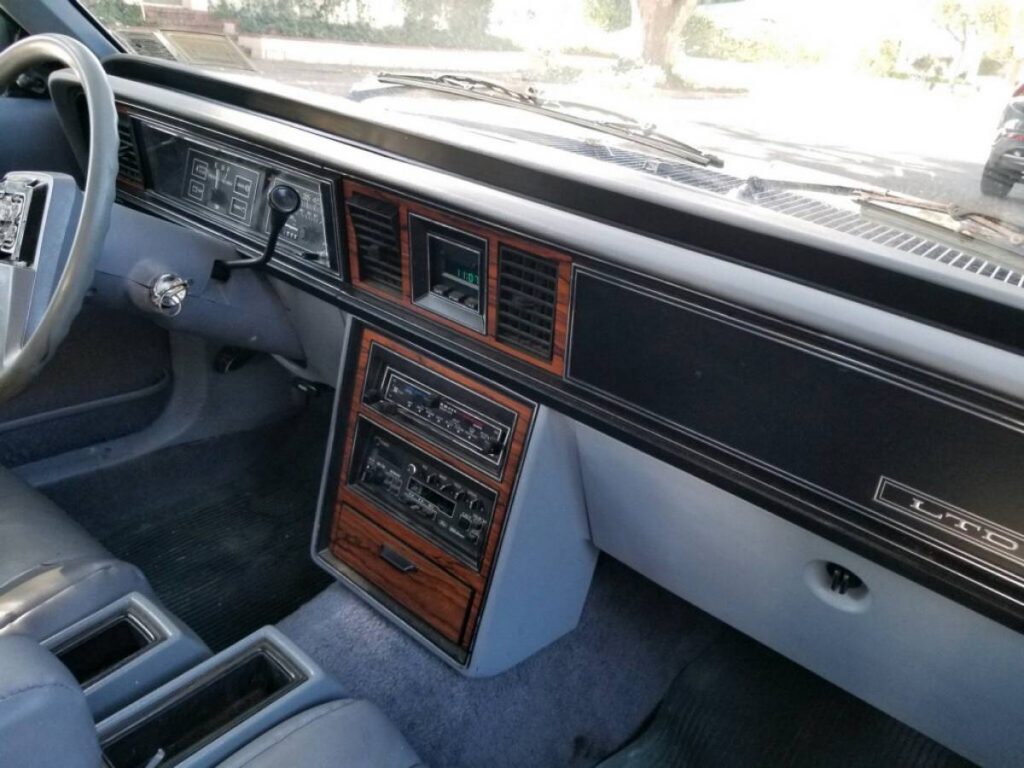 The ad claims 42,000 miles, and who am I to argue? Plenty of cars end up sitting in garages for years, only being used occasionally. It might be 142,000 but somehow I don’t think it would have held up this well for that many miles. We don’t get any valuable info; the ad only says it “runs and drives fine.” C’mon, folks; it’s not like Craigslist charges by the word. 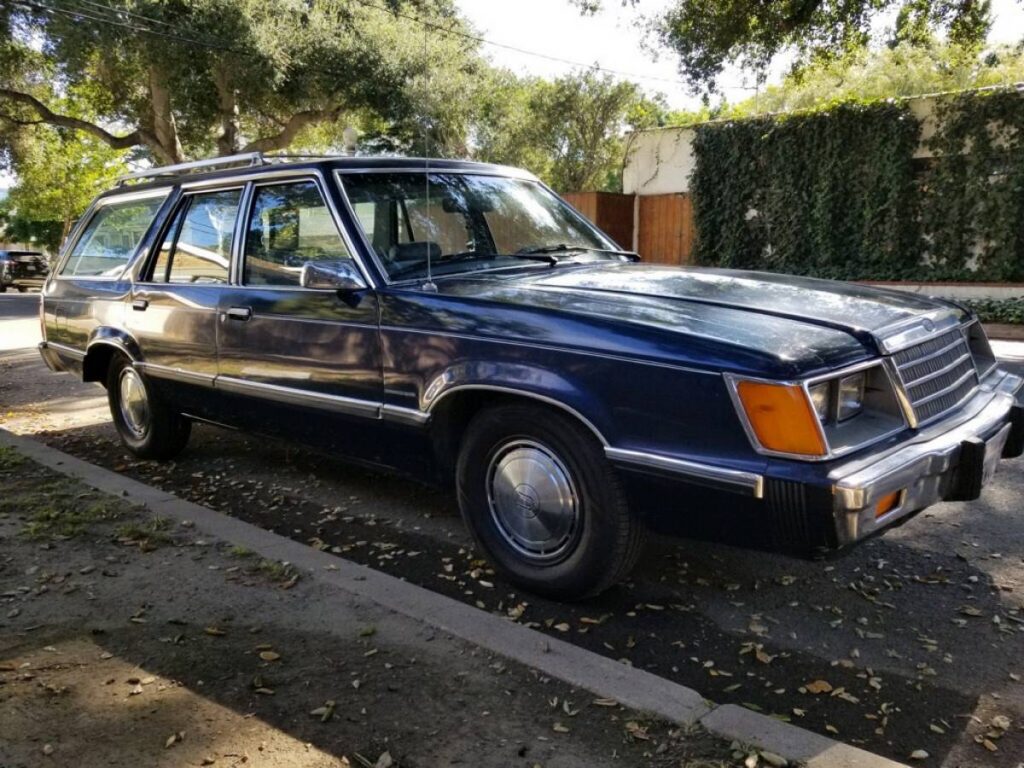 Anyway, the nice thing about this being a Fox-body car, and thus sharing a platform with the 1979-93 Mustang, is that all sorts of higher-performance goodies exist, ready to be bolted into this dark blue grocery-getter. You could really build a great sleeper with this car, and in the process, make it run a damn sight better than “fine.” 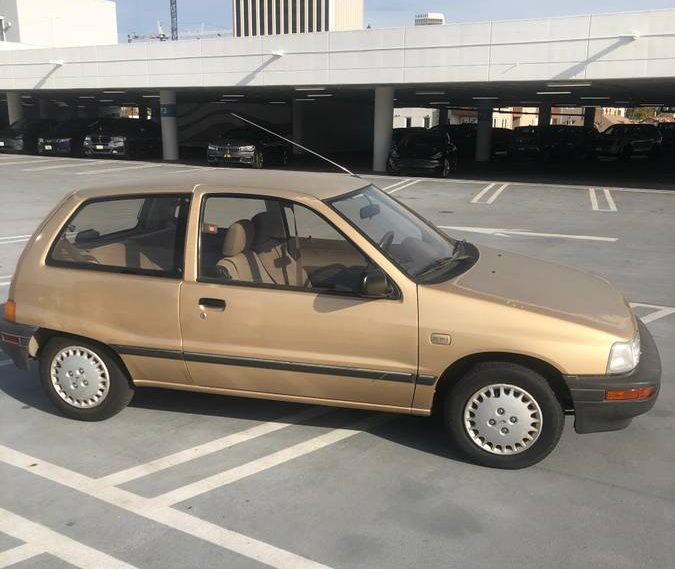 Runs/drives? Doesn’t expressly say, but since it’s photographed in a public parking lot…

Do you remember that Daihatsu used to sell cars in the US? They weren’t here for long, only from 1988-1991. Only the Charade subcompact and the Rocky mini-SUV were sold here, and they didn’t do well: this Charade is one of only about 43,000 US models, and I’d imagine there aren’t many of those left. 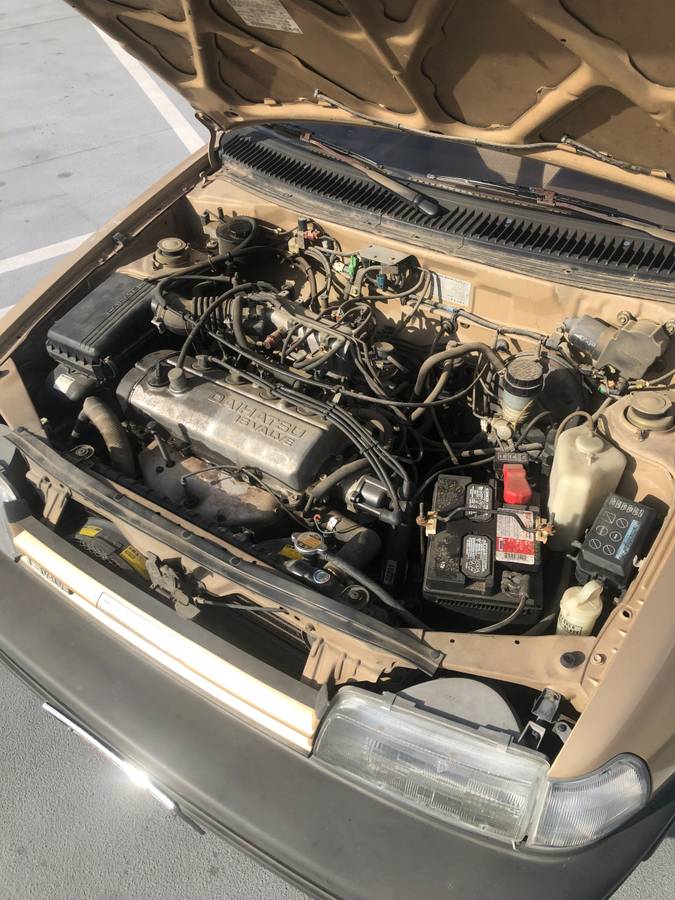 Believe it or not, the fuel-injected 1.3 liter four in this Charade is the big engine. The standard Charade engine was a carbureted 993cc three-cylinder. Oddly, the three-banger only propelled the car in reverse: as you backed up, you wound up a big spring, and then when you shifted into a forward gear, the spring powered the car and sent it zooming across the kitchen floor. (Just kidding.) At least this Charade makes up for its lack of power with a manual gearbox. Driving an automatic Charade would be like watching paint dry. 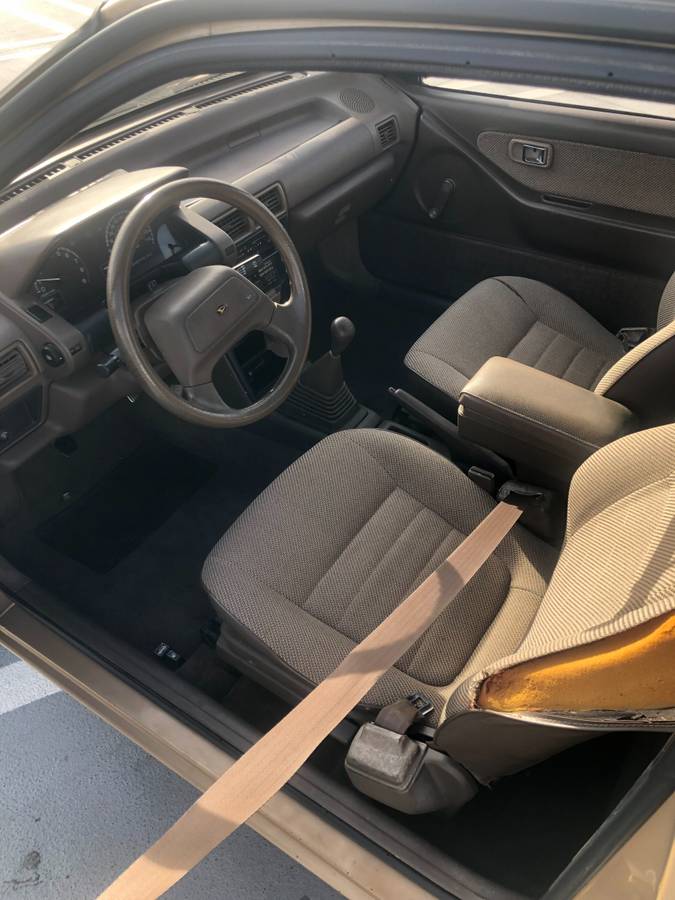 This car only has 57,000 miles on the clock, and it looks like it’s in good shape, except for some missing clearcoat and a popped seam on the driver’s seat. The ad doesn’t expressly say that it runs, but we have to assume it does. 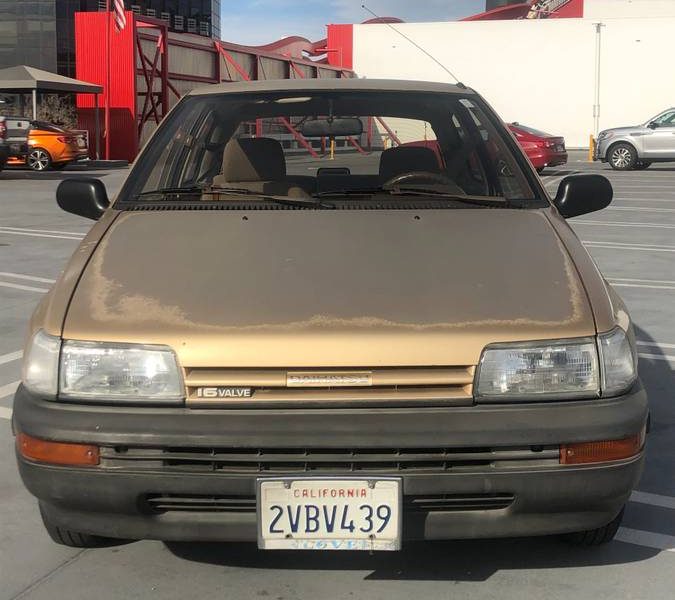 Even though it appears to be fully functional, I can’t imagine this car being used for its intended purpose. Parts must be tough to come by these days, and one good fender-bender would spell disaster. It’s an interesting historical curiosity, and it would be a hit at Radwood (and probably the only Charade there), but commuting in it probably isn’t a brilliant idea.

Welp, that’ll do it, I guess. I hope to be back soon, but until then, take care of yourselves, and go do fun stuff with cars whenever you can. Thanks so much for reading!

Pacific Northwest-based self-taught DIYer of all the things. Current fleet: 1971 MGB GT, 1989 Chevy K1500, 2013 Chrysler 300C, 2003 Infiniti QX4, and 1966 Aristocrat Land Commander trailer. Not to mention about 40 RC cars and around 100 model kits...
Read All My Posts »
PrevPreviousPenny Racer, Not A Pen Eraser: Cold Start
NextThe Legendary 4×4 ‘Scout’ Brand Could Be Back As A Volkswagen Built By iPhone-Maker FoxconnNext