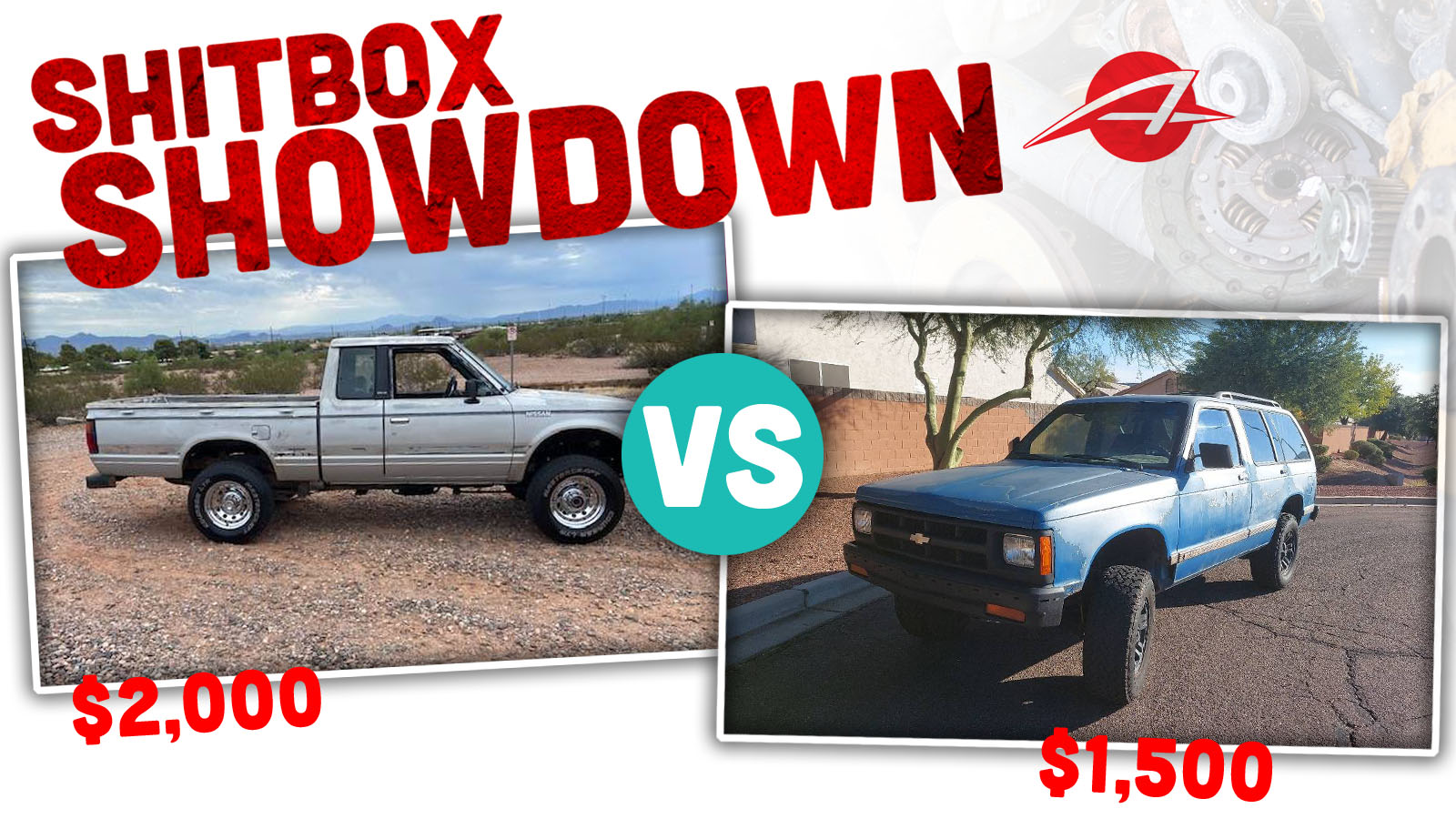 Good morning! Today’s choices take us to the dry desert air of Phoenix, Arizona. Two trucks, both manuals, and both with lots of new parts, some of which you need to install yourself. But let’s wrap up our Southern sedans first:

Well, it looks like the best used car in Atlanta can’t beat out a cream puff from Florida. Hopefully the Intrepid new owner can Dodge a bullet with the potential engine troubles.

Today’s choices come from Arizona, the southwesternmost state of the Four Corners, home to the Grand Canyon, Roger Clyne, and millions upon millions of scorpions, many of which end up encased in Lucite and offered for sale as paperweights. (Seriously – every single gas station sells those damn things. What’s with that?) They’re both old trucks with beefy tires, perfect for the desert. Both run and drive, both need some work, and both include all sorts of parts to cure what ails them. Let’s take a look at them. 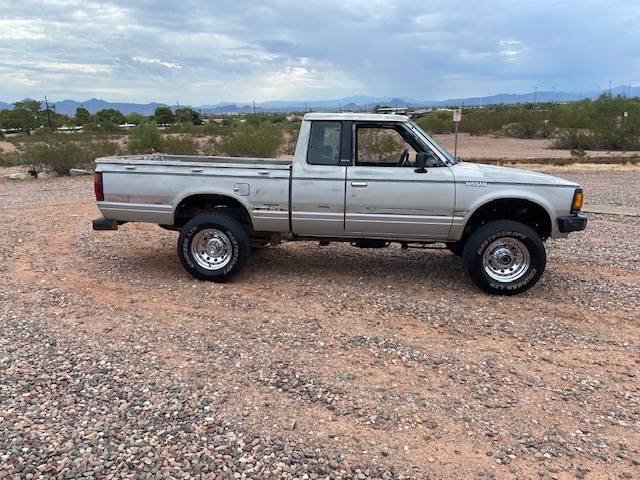 Location: between Tempe and Scottsdale, AZ

I love the old Nissan/Datsun 720 series. As I think I’ve mentioned before, I used to have one, and I remember it fondly. And I’ve had good luck with Nissan trucks since then. These old King Cabs just exude little-old-truck cool: the shape, the stance, the rope hooks on the sides of the bed… it all just works. 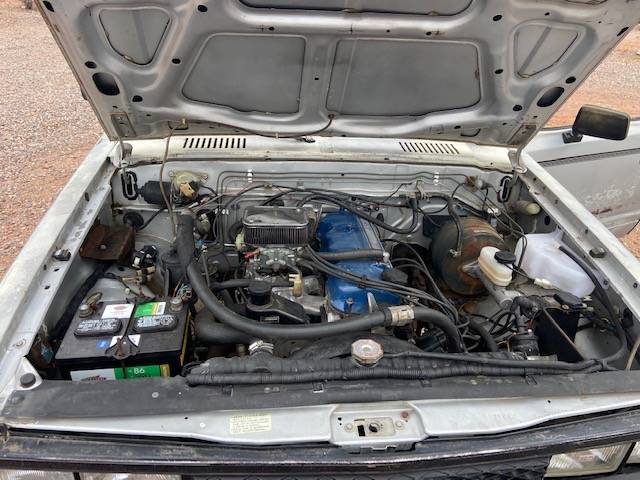 Another thing that “just works” is the twin-spark NAPS-Z engine in these trucks. They’re chain-driven overhead-cam engines that just last and last. This one appears to have a Weber carb installed, which improves drivability and reliability, but may cause some issues with emissions testing, so keep that in mind. The seller says this engine has developed a tick in the top end. A valve adjustment is the first place to start; hopefully that’s all it is. 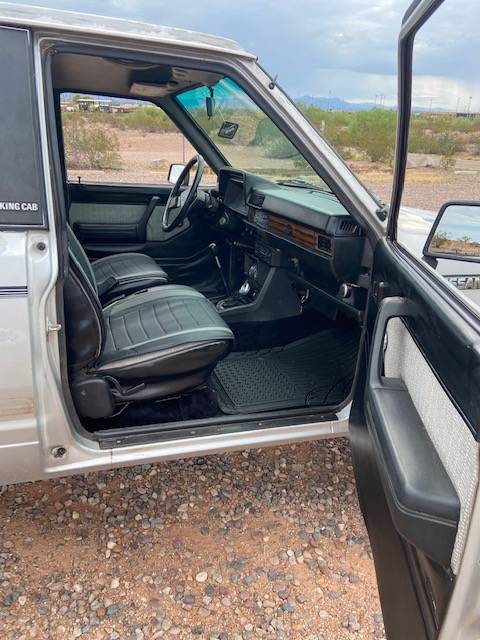 Inside, this truck looks nice and clean. The jump seats have been removed from the back cab area, but they’re included, as is all the missing exterior trim. It has air conditioning, but sadly it doesn’t work at the moment. Outside, there is a little rust where these all rust, at the seam between the bed sides and floor, but I don’t see much else. It has nice aftermarket wheels and cool white-letter tires, but there’s no indication of their age or condition. 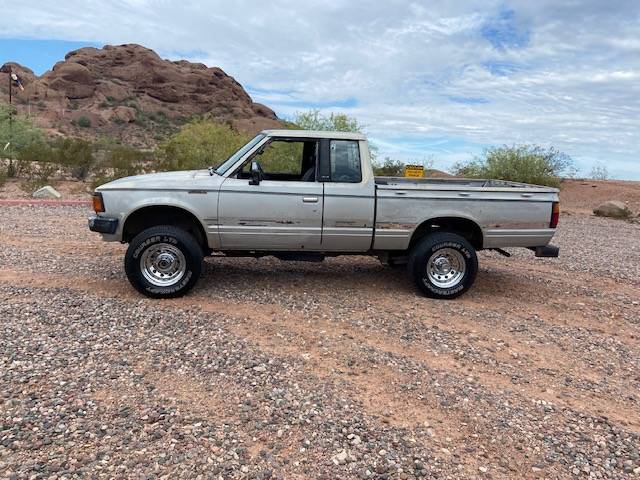 The seller is including new polyurethane suspension bushings as well. That’s not an easy job, but it should make a nice-driving truck afterwards. A bunch of other parts are listed as well, but it’s unclear which of them are actually installed in the truck. Still, it’s less stuff you have to buy. 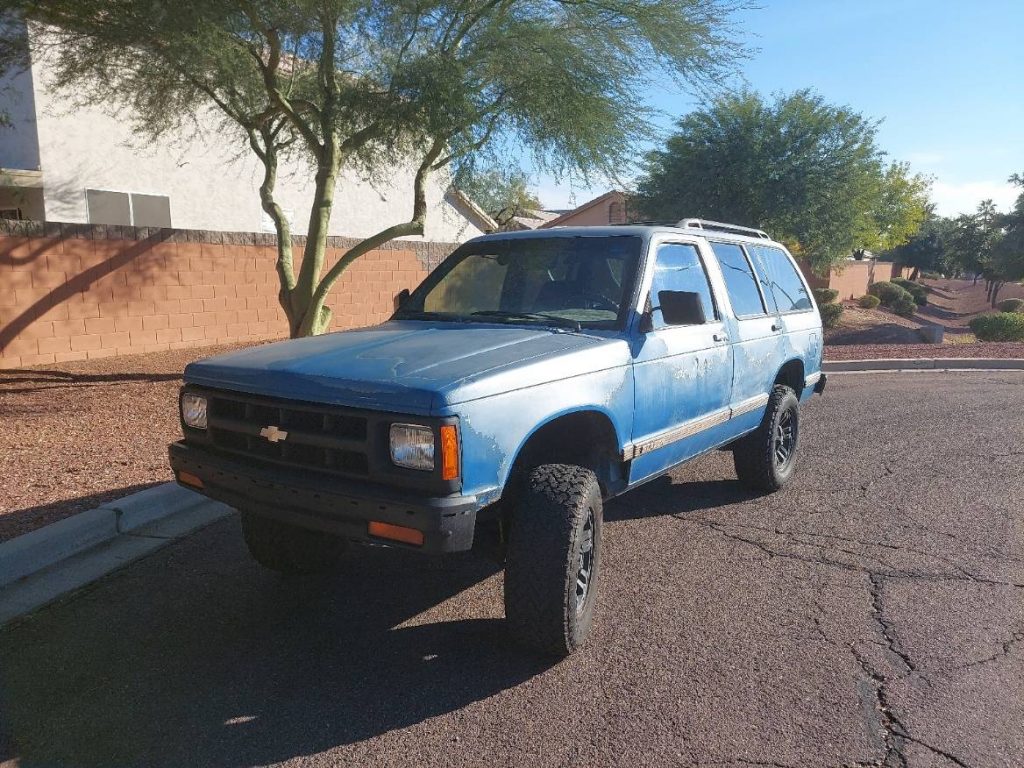 Let’s get it out of the way right up front: Yes, this Blazer is two-wheel-drive. It has been lifted, and has bigger-than-stock tires, but 4WD isn’t really necessary for bombing around in the desert in most cases; ground clearance is more important. 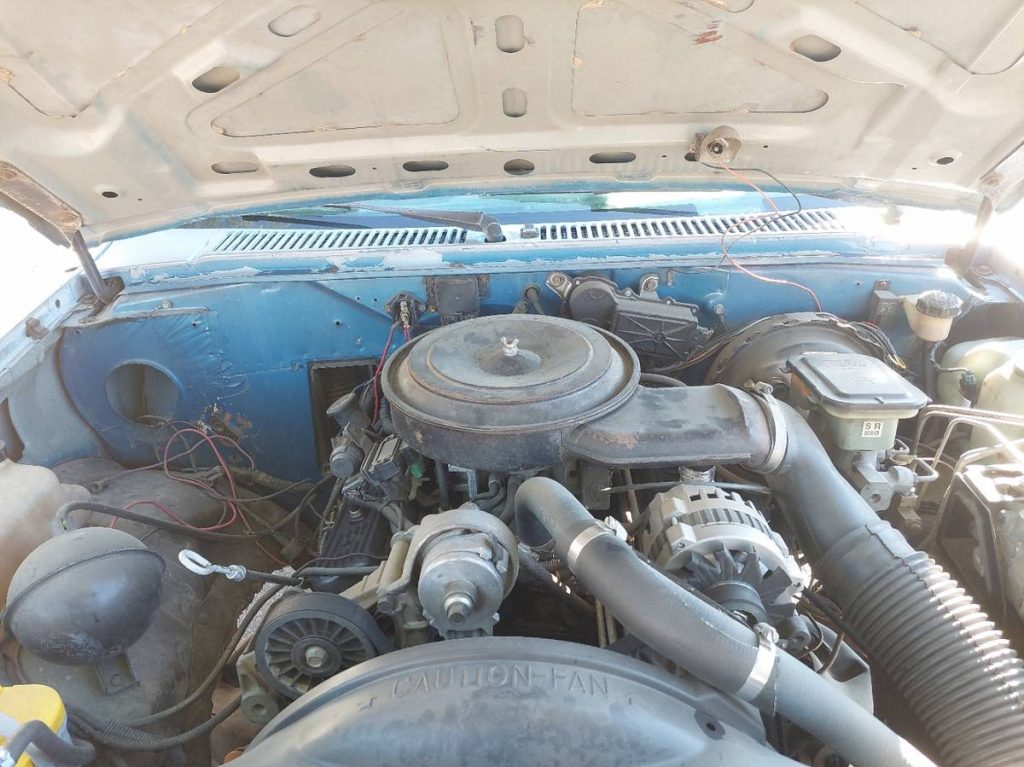 Regardless of the number of driven wheels, it has the good engine and transmission: Chevy’s 4.3 liter V6, here with throttle-body fuel injection, spinning a Getrag 5 speed manual transmission. The seller, who has apparently owned this truck for a long time, says that it runs and drives well, but the clutch is “a little iffy.” A test drive would be necessary to find out how iffy. For some strange reason, the AC and heater components under the hood have been removed, but it sounds like they’re included. 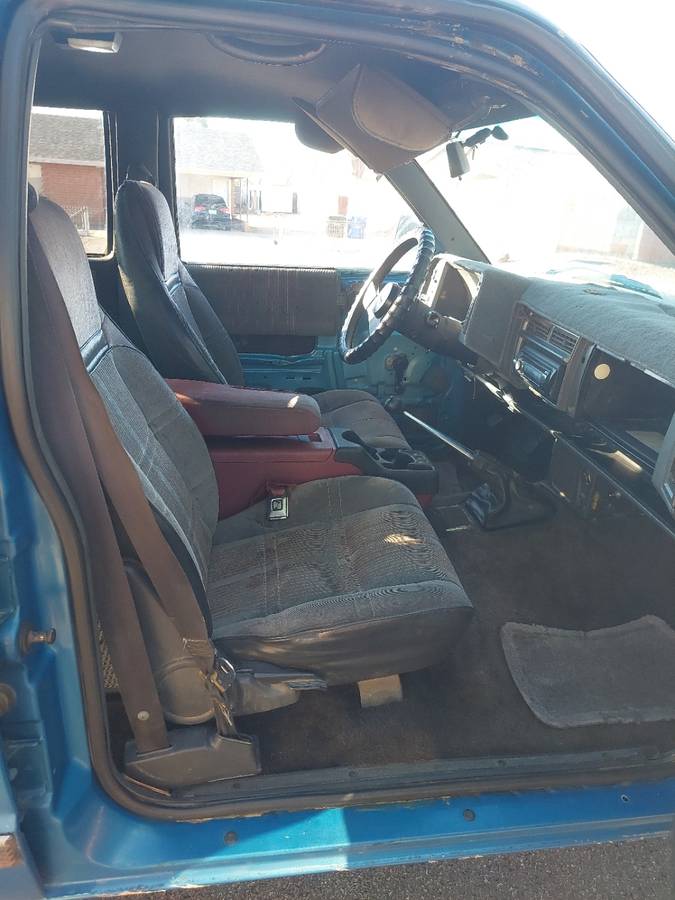 Inside, things are kind of a mess: the center console doesn’t match, the driver’s side door card is missing, and everything is covered in a fine layer of that desert dust. The outside is sun-bleached, but straight and rust-free. The seller says the tires are newish, and it comes with a folder full of service records and receipts, a stack of repair manuals, and a hatch full of parts, including what looks like a fuel pump, brake pads, and an alternator, among other things. 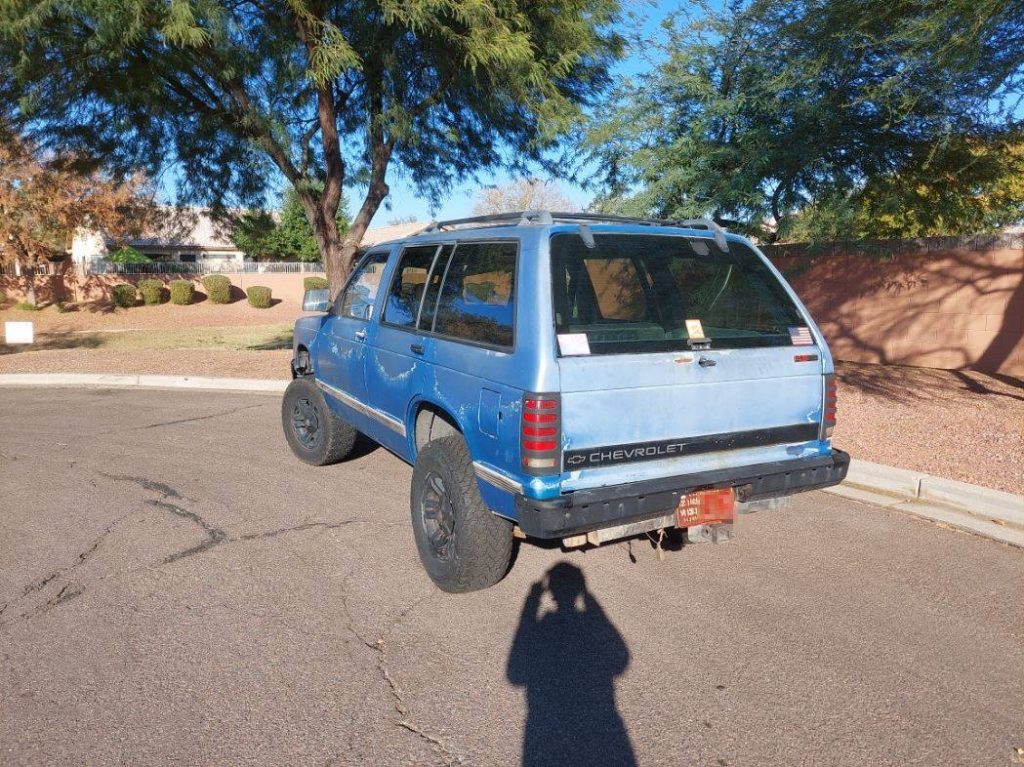 A truck like this you can’t really call good-looking, but it has a rough, weathered charisma that’s hard to deny. It’s like Edward James Olmos in truck form. And for fifteen hundred bucks, it seems like a decent deal, as well.

Vehicles don’t rust in the desert, but that sun beating down does give everything a characteristic weathered look that goes well with big knobby tires. Both of these trucks have their charms, but which one is the better deal? That I leave up to you.