You know a kind of something I like? Unapologetically cheap things that aren’t terrible. Happily, there are things that definitely still fit into this category: hammers, some burgers, maybe those tiny single-board computers. When it comes to cars, though, this category gets mighty lean. The average price of a car in 2022 is $48,000, and it feels like hardly any carmaker gives a brace of BMs about the low end of the market. But there are still some cars on the low-end of the market worth looking at, like the 2022 Volkswagen Jetta. 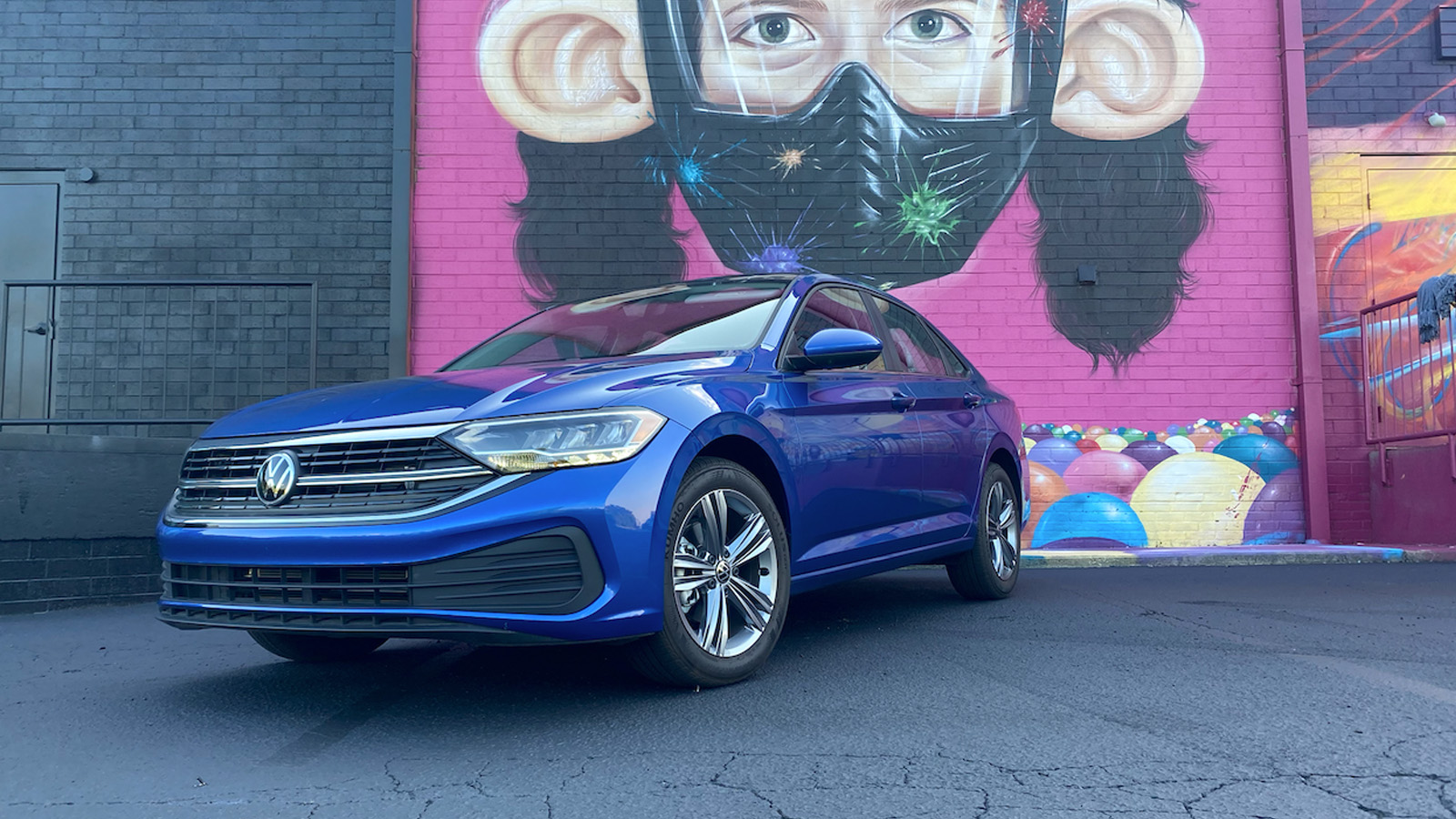 [Editor’s Note: I want to try something new here: we have been getting more cars to review, which is great, but our usual deep-dive approach to car reviews just isn’t always the right approach to every car. Some cars just don’t need a 5,000-word review covering every minute detail. So, with that in mind, we’re going to try some Micro-Reviews, like this one here, the first of its name.

In a Micro-Review the goal is to get you the important information and distill down what you actually need to know into two take-aways: first, the three most significant traits of the car, good or bad, and then one final punctum of the car, a term I’m borrowing from Roland Barthes and the art criticism world. Essentially, what it means in this context is what is it about the car that actually manages to get your attention. It could be a detail or one feature or the feeling you have when you walk away from it. It doesn’t have to be rational or qualitative, but it has to be what the essence of that particular car feels like.

Why Does It Exist? 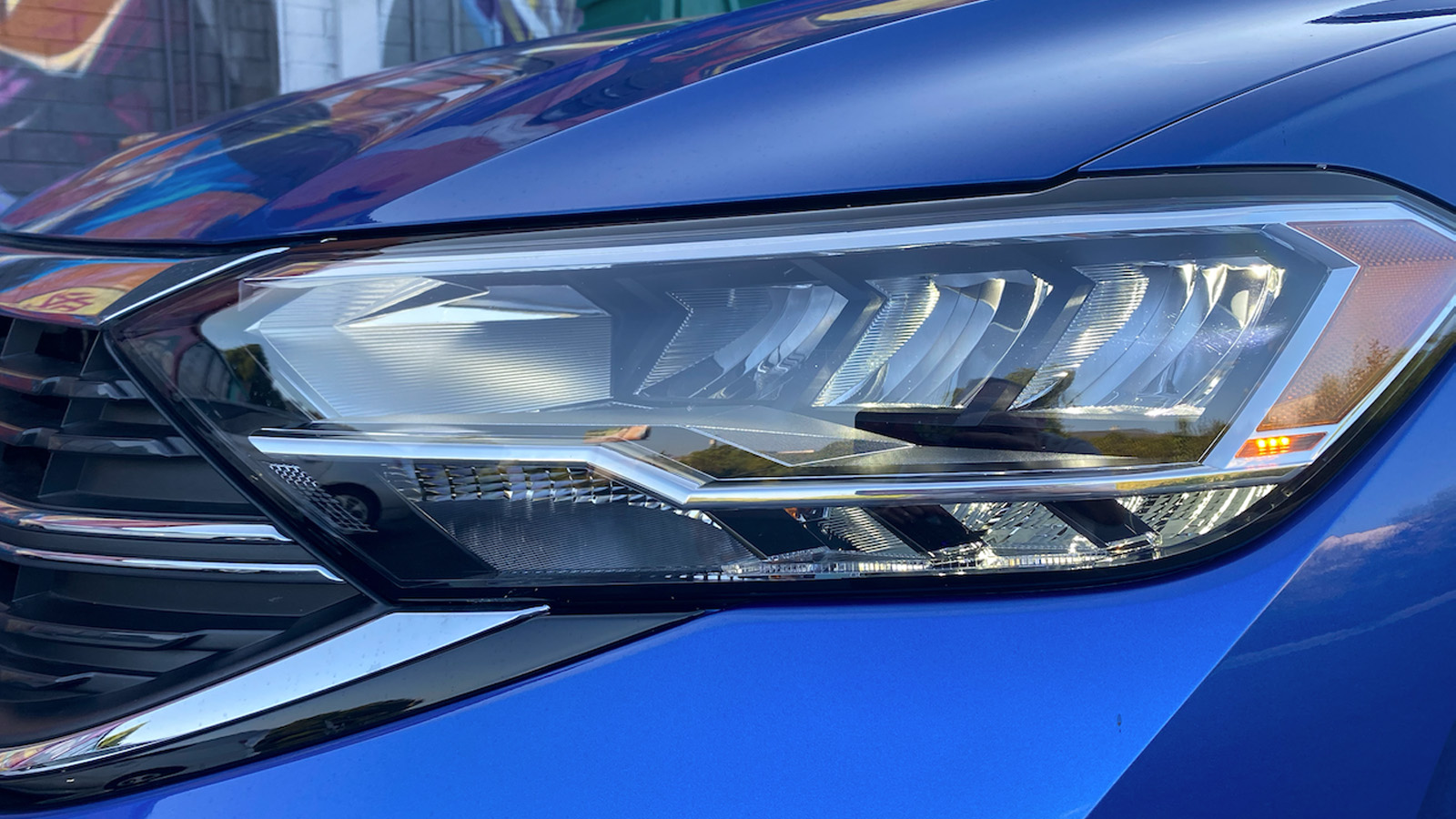 Volkswagen needed a cheap, entry-level car in America, I assume, and since we no longer get the basic Golf, the Jetta is it. I suppose it’s also an option for the vanishing number of people who still want a traditional three-box sedan, which for VW means either the Jetta or the sleek and premium Arteon. 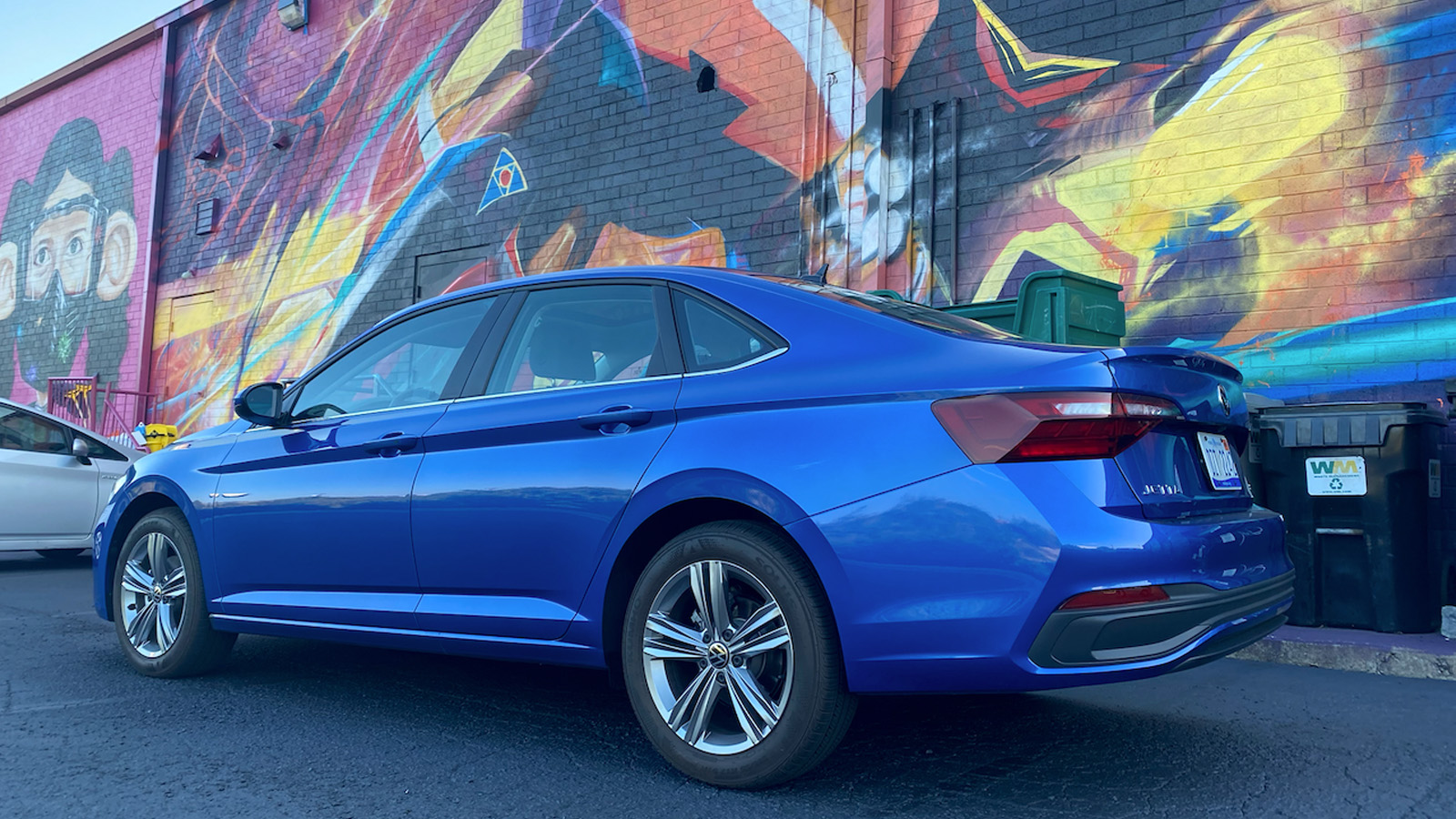 In a word: fine. It looks fine. It’s not exactly memorable or even striking, but I think it can be handsome, especially in profile. You’re not going to be embarrassed by the look of the Jetta, but you also may have trouble remembering exactly what it looks like, too. The color selection is more soporific than terrific, all grayscale except for a lone (but very nice) blue, which is the color of the one I had and the one you should pick.

How About The Inside? 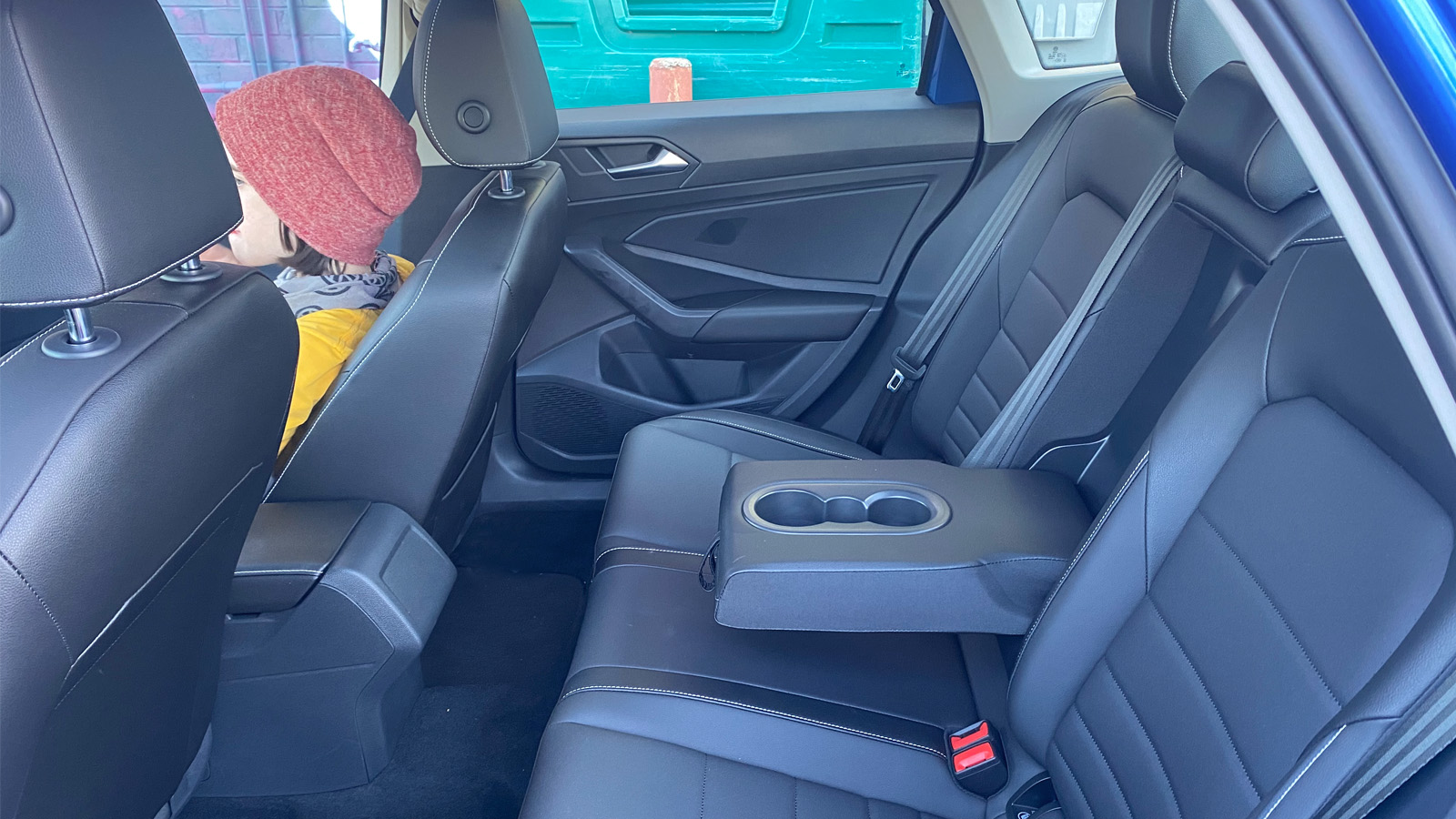 Again, fine. It’s comfortable, I like the design of the door cards and the instrument cluster LCD isn’t trying to pretend to be fake gauges or anything. Center stack screen isn’t huge but it’s good enough. Plenty of physical controls, which is nice. A little dark in the choice of materials, but my one actual complaint is this: 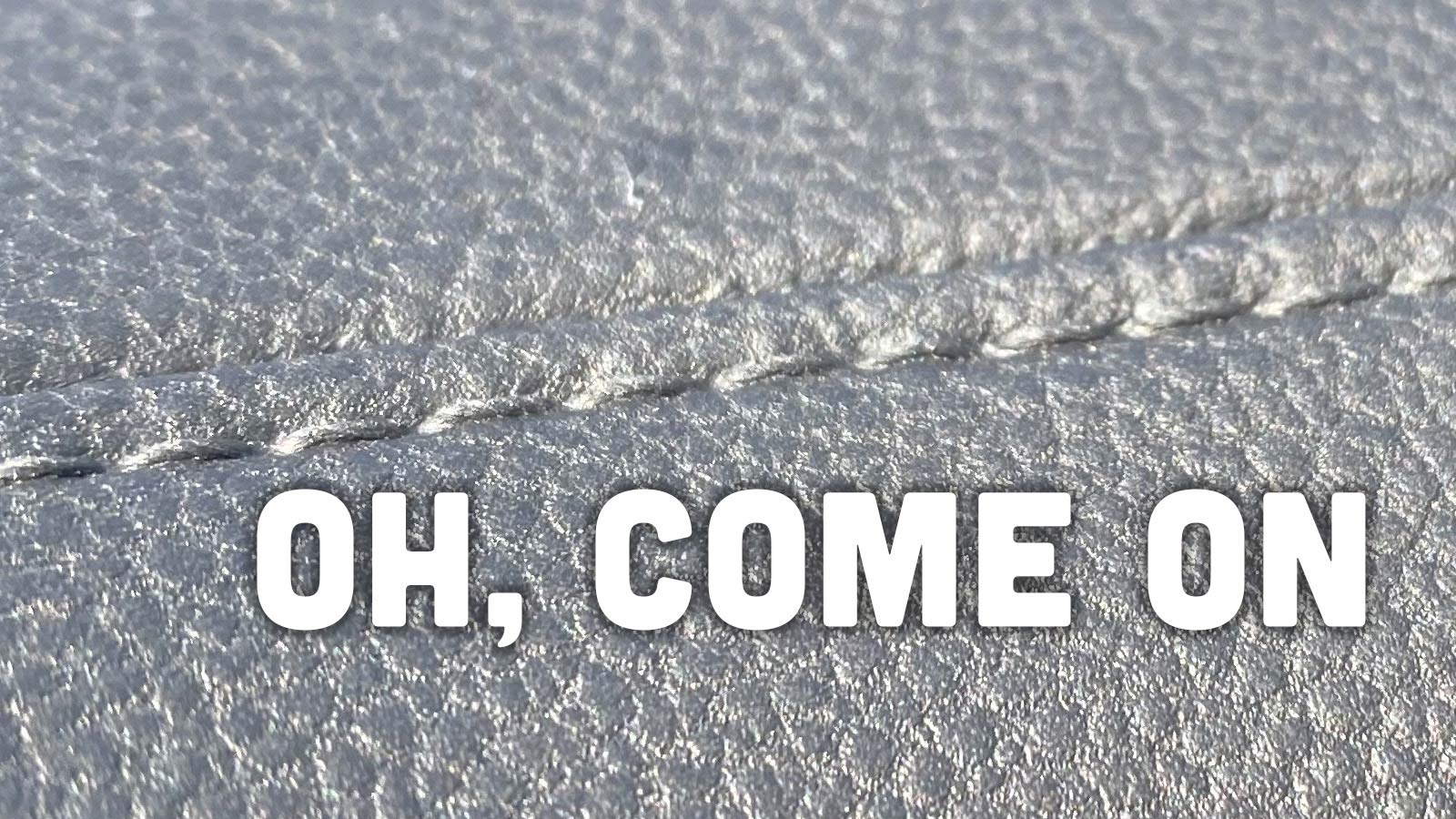 Yep, that’s fake, molded-in stitching on the dash. I thought this kind of goofy shit went out with the Chevette. Who still does fake stitching? You’re better than that, VW. 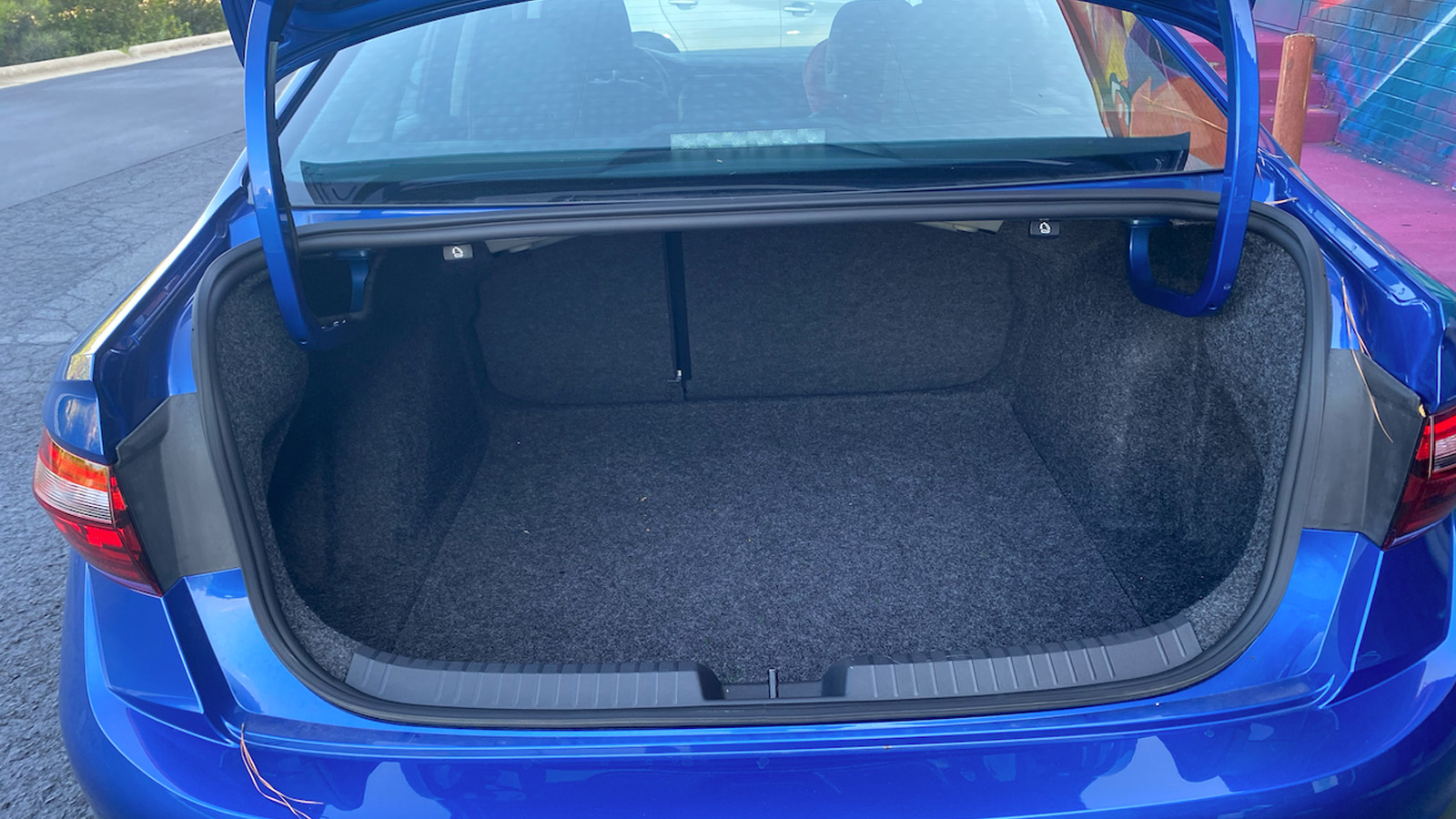 Other than that minor gripe, it’s pretty roomy, comfortable, and the materials don’t feel like garbage. Oh, and the trunk is a good size, and the rear seat folds down if you need to cram in a taxidermied monitor lizard or something like that. 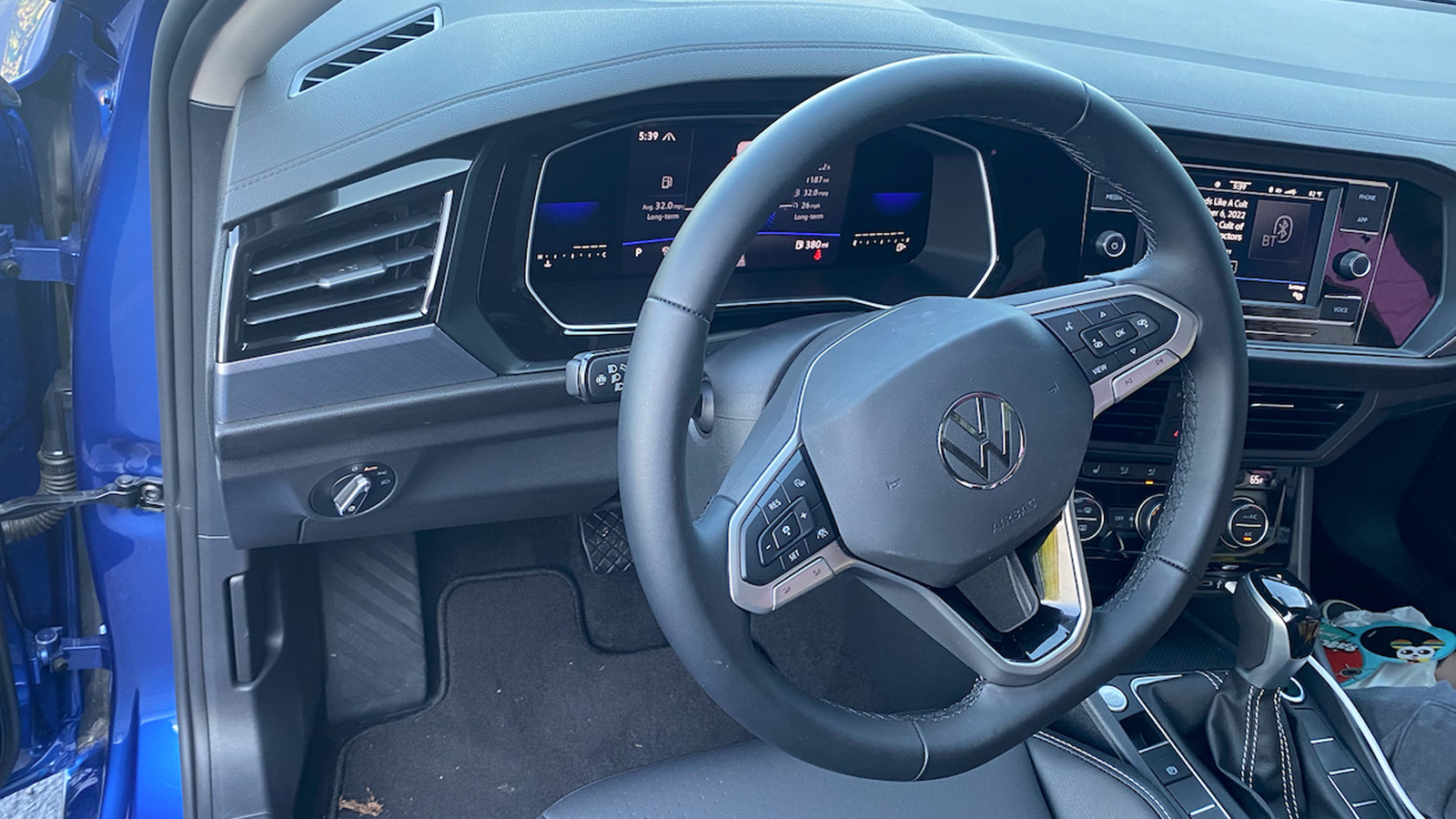 This was the surprise: much better than you’d guess for an entry level car! Sure, 158 hp doesn’t sound like much, but 184 pound-feet of torque and a weight of 2,989 pounds somehow conspire to make the Jetta actually feel pretty quick. Stomping the gas delivers a satisfying surge, and, maybe by simple virtue of being a lower-than-every-crossover-and-SUV vehicle out there, it feels pretty good to fling around.

I had some fun driving this thing, and then when I decided to pretend to be an adult again, it gave good fuel economy, averaging close to 32 mpg. It’s not life-altering, but it’s good! You can drive it in a fun way, and it responds well, and if you’re not in the mood, it’s as easy and forgettable as anything else out there.

Also, it has the smallest squishy pedestrian-safety engine cover I’ve ever seen. It’s this little foam block, right there in the middle: 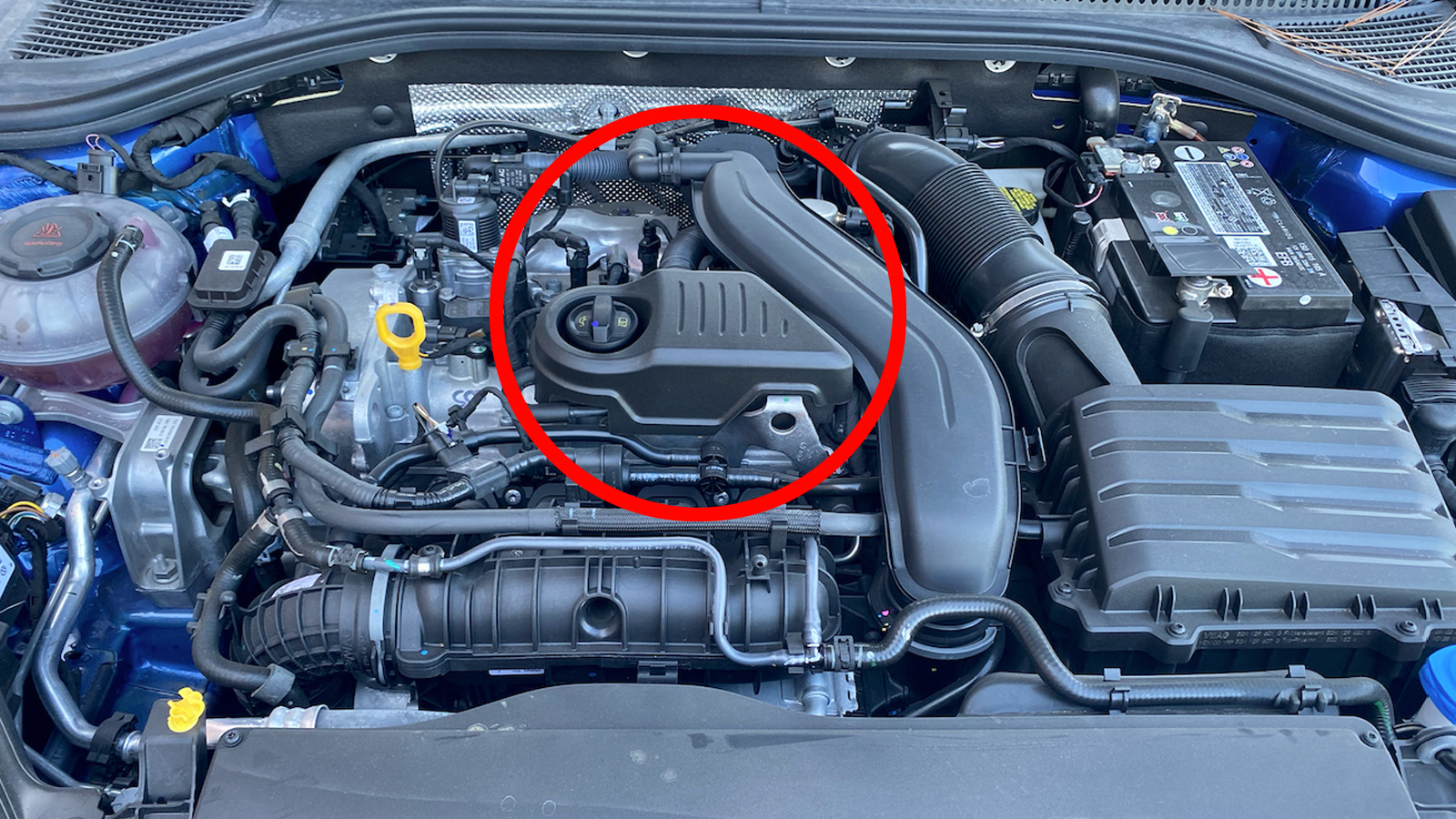 Does it Have The Electronic Crap I Want? 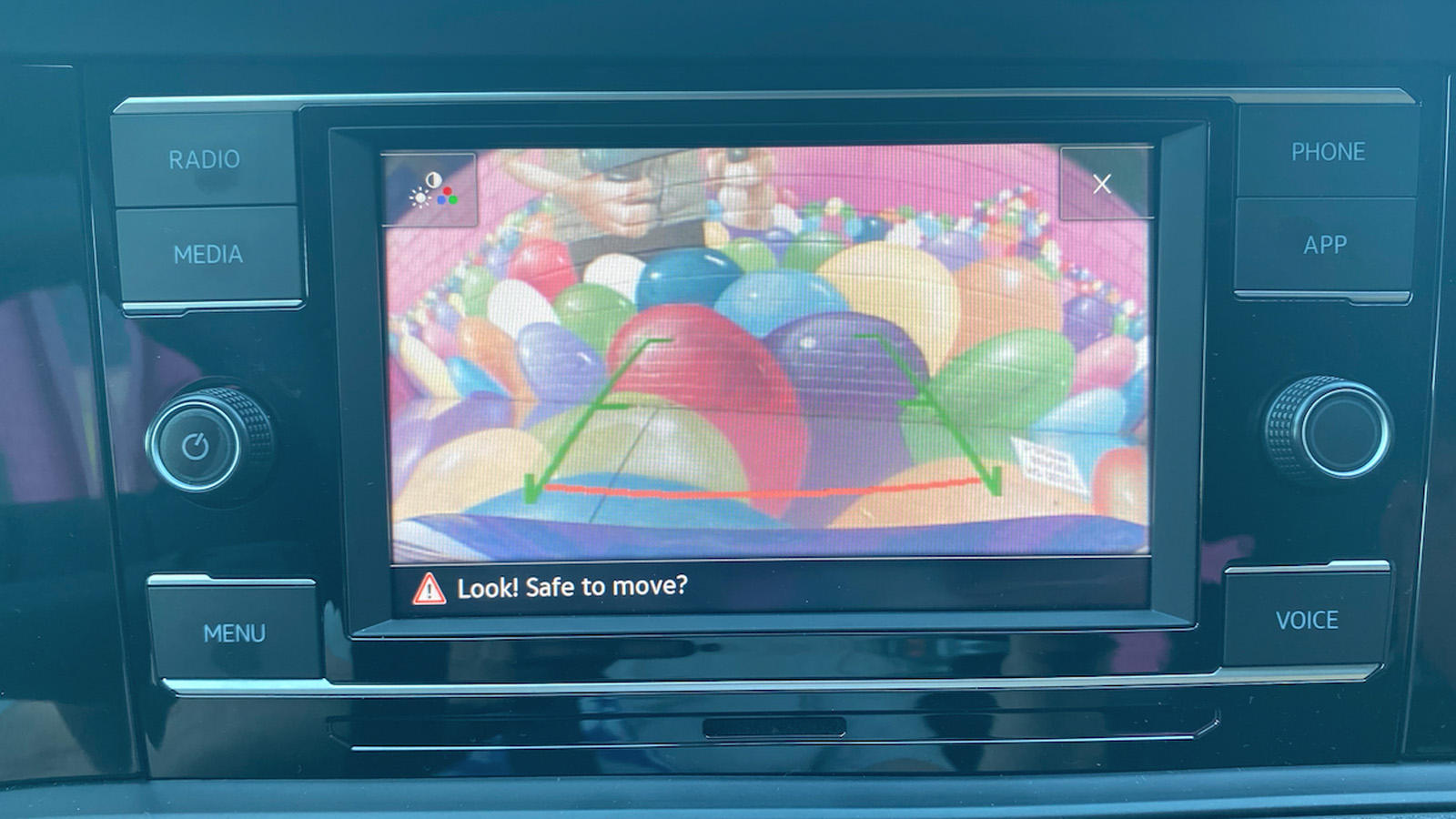 Uh, sure, probably. Android Auto/Apple Car Play (though not via Bluetooth), it has IQ Drive in SE and up trim, which is VW’s lane-keeping/emergency braking/adaptive cruise setup, and that all works like you’d expect. If you’re really all about ultra-modern tech stuff in your car, this probably isn’t for you. For most people, though, it’s fine and feels modern enough without making tech the centerpiece of the car.

Three Things To Know About The 2022 Volkswagen Jetta:

Does It Fulfill Its Purpose?

Yes, I think so. It’s a decent entry-level car that won’t embarrass you and delivers good economy, comfort, and space. It’s not a crossover, and it’s not even trying to pretend to be one. It’s a car, one maybe you can afford.

What’s The Punctum Of The 2022 Volkswagen Jetta? 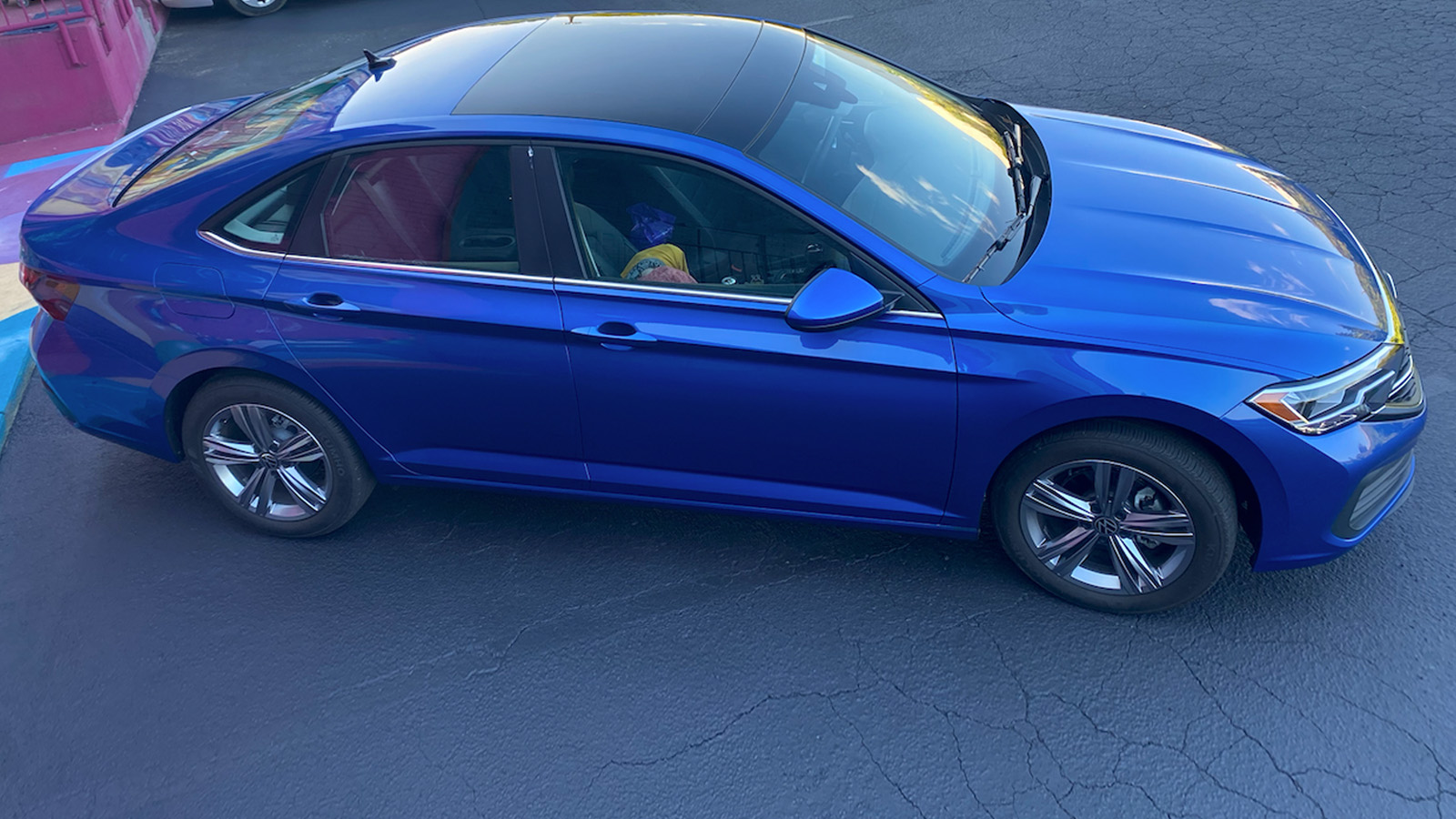 It’s a fun car going undercover as a rational, practical car. Especially if you get the manual.

I'm a co-founder of the Autopian, the site you're on RIGHT NOW! I'm here to talk to you about taillights until you cry and beg me to stop, which I absolutely will not. Sorry. Hug? Also, David's friend.
Read All My Posts »
PrevPreviousLots Of Parts Included: 1984 Nissan 720 King Cab vs 1991 Chevrolet S10 Blazer
NextThe New BMW XM Is Extremely Ugly And Surprisingly HeavyNext