Welcome back to Shitbox Showdown! Today we’re going to be looking at a couple of those ubiquitous boxes-on-wheels: minivans. (Don’t make that face). First, however, we need to see the results of yesterday’s massacre–I mean, vote.

Jeez, you guys. I get it; you didn’t like the Eagle. But man, some of the comments were brutal. For the record, I always liked the Premier and Monaco, and as several commenters pointed out, it was historically important for Chrysler. Its arrival led their engineering teams in entirely new directions they hadn’t thought of before, kinda like that leftover arm and brain chip in Terminator 2.

Oh, and for those requesting a “neither” vote choice: No. Play the game like the other kids. If nothing else, choose which color you like better. (Granted, that strategy won’t work today.)

There is perhaps no vehicle that carries quite as much of a stigma as the minivan. It’s what you drive when you have “grown up” or “settled down.” It’s the mommy-mobile, the kid-taxi, the Family Truckster. But there are a lot of use cases for a big enclosed box on wheels that have nothing to do with one’s progeny. Maybe you’re in a band, and your drummer thinks he’s the second coming of John Bonham, and you need a van to haul his overly-large drum kit. Maybe you own a rare and used book shop, and need a van to drive around to estate sales and buy up personal libraries (I actually knew someone who used a minivan for this). Or maybe you just want to sit up high in traffic without having to deal with a cumbersome SUV.

Old minivans can be especially good deals as cheap used cars. After a couple hundred thousand miles, after a thousand Fruit Roll-Ups have been cleaned out of the carpet, after the DVD player is as sick to death of Shrek and Frozen as the front-seat passengers are, what’s left is a tough, mechanically-simple vehicle whose whole designed purpose is comfort and convenience. What’s not to like?

I’ve found two examples for us to compare and contrast. One is the granddaddy of all minivans, and the other is a couple generations newer. Let’s see what you make of them. 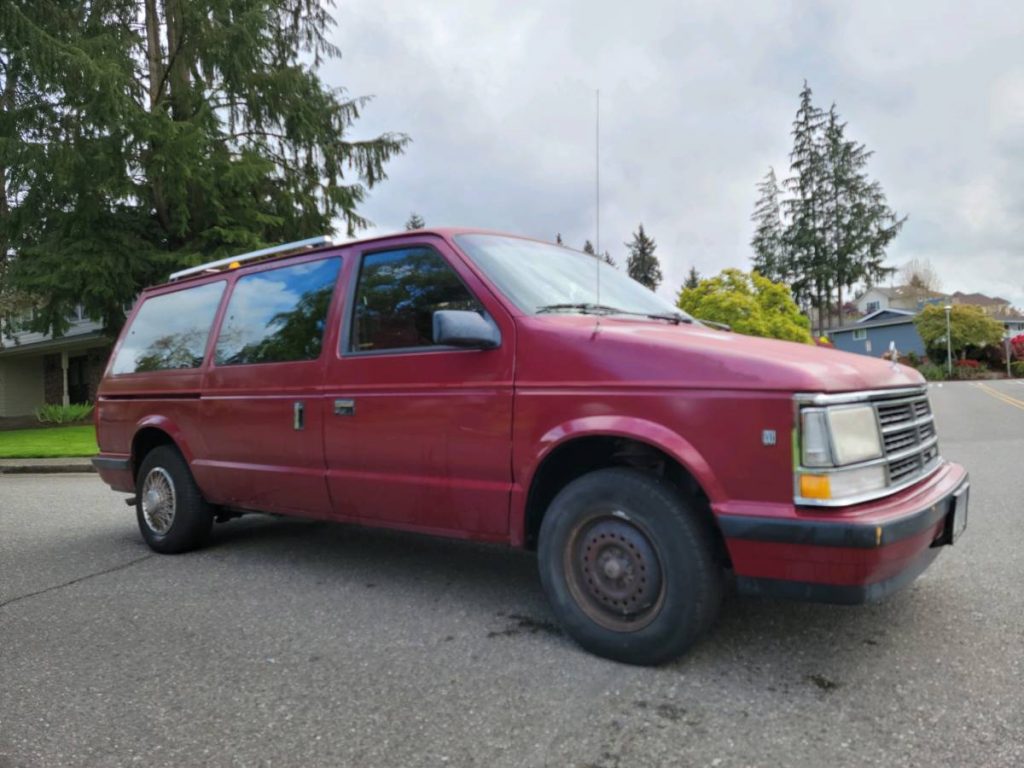 Runs/drives? Just fine, according to the seller

This is it: the one that started it all. The first-generation Dodge Caravan, introduced in 1984. Back then the advertisements didn’t even use the term “minivan;” it was “garageable van” or “wagon.” Unlike other things with the prefix “mini” – skirts, say, or muffins, which have remained more or less consistent in size over the years – minivans have grown, and that embiggening started here, with the stretched-wheelbase “Grand” Caravan and Plymouth Voyager. The Grands added seven inches to the wheelbase, fifteen inches to the overall length, and a whole lot of room inside. 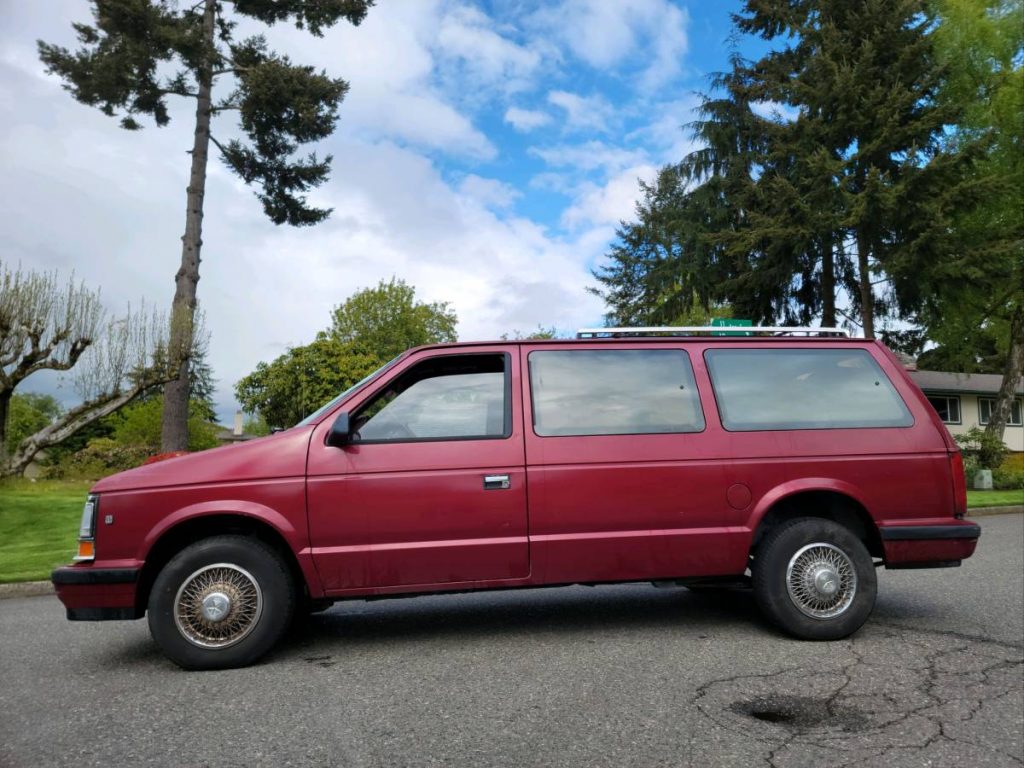 As a 1988 model, this particular Caravan precedes the troublesome four-speed “Ultradrive” transmission by a year, instead backing its Mitsubishi-built V6 with a good ol’ Torqueflite three-speed. It’s not as cool as the turbocharged stickshift variants were, but it gets the job done. It’s also pleasantly devoid of fake woodgrain, which never looked right on these, at least to my eye. [Editor’s note: I realize aesthetics are subjective, but Mark is wrong, here. -DT] 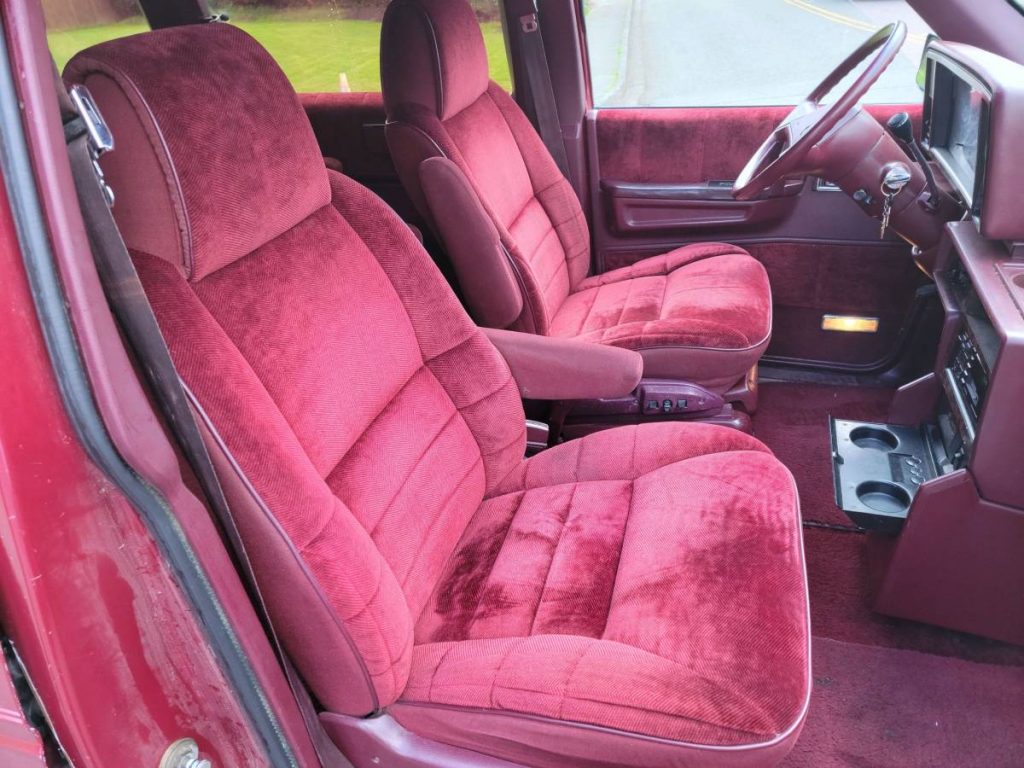 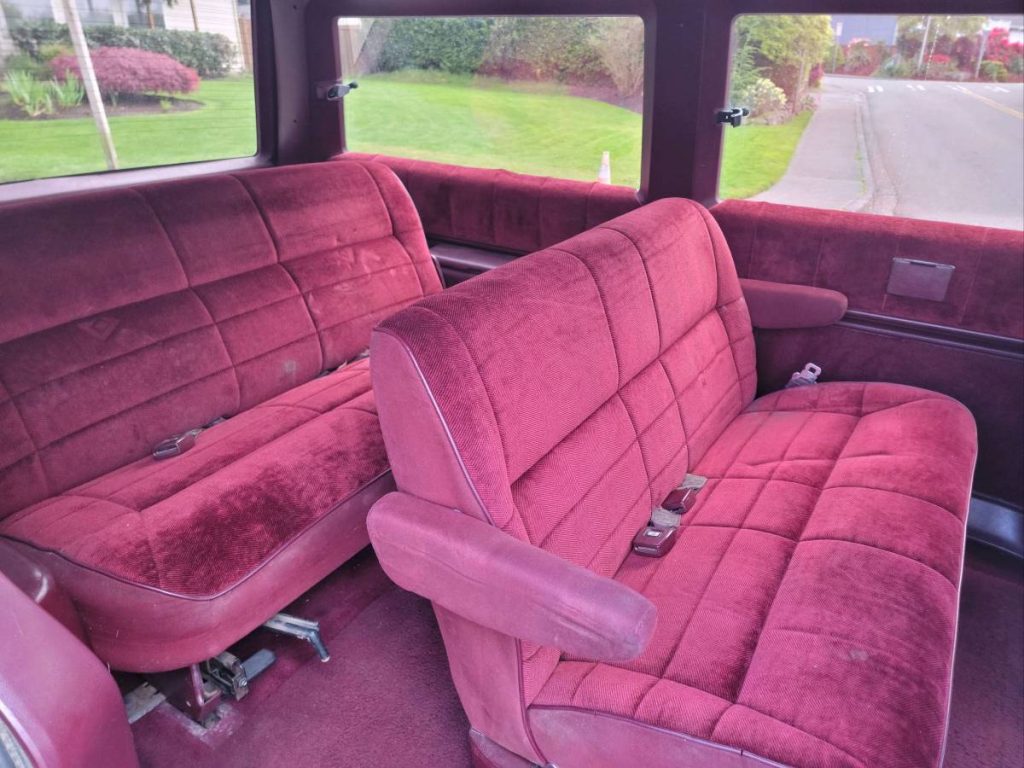 What does look right – and refreshingly simple, compared to modern designs – is the interior, which is swathed in yards and yards of maroon velour slowly fading to pink. There are no overhead screens. No audio jacks. No separate climate controls. Just seats. What did we do back then, on long trips? Read, or play the license plate game, or play Slug Bug (until Mom and Dad told us to knock it off), or actually look at the scenery. Wild, huh? 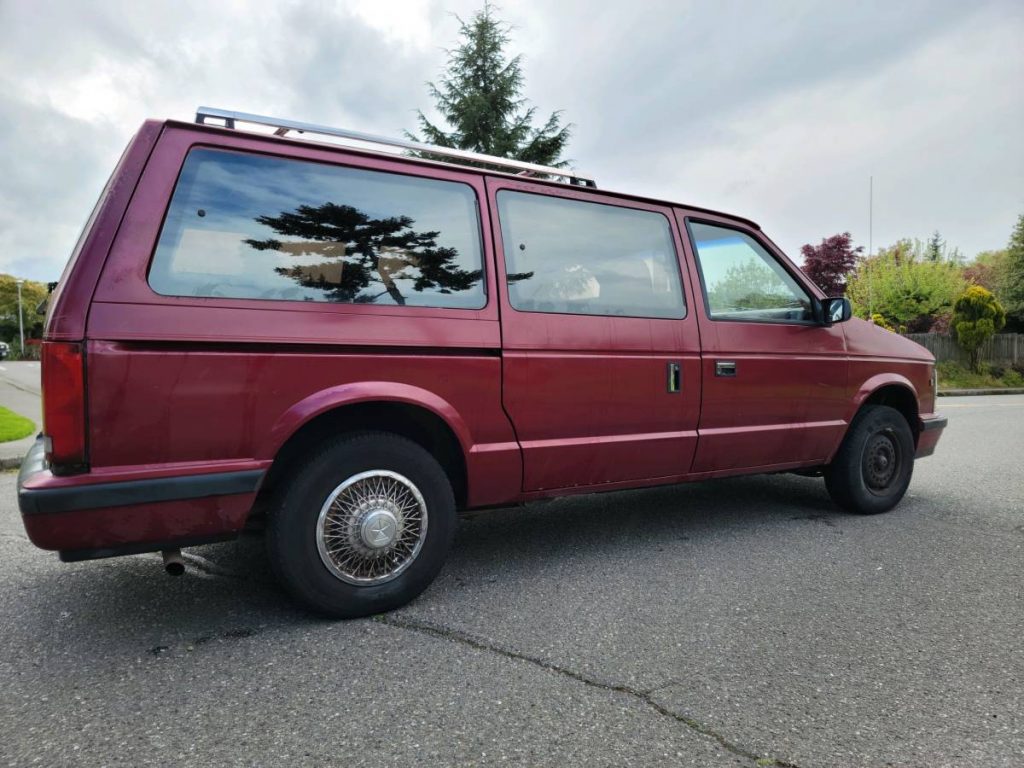 Actually, this van looks really good for its age. It’s not rusty, it’s only missing one hubcap, and the interior isn’t trashed. If that is only 40,000 miles on the odometer, somebody could flip this on Bring A Trailer and probably make some money after they found a replacement hubcap. Or they could just drive it and enjoy it, as a reminder of where we were, and how far we’ve come. 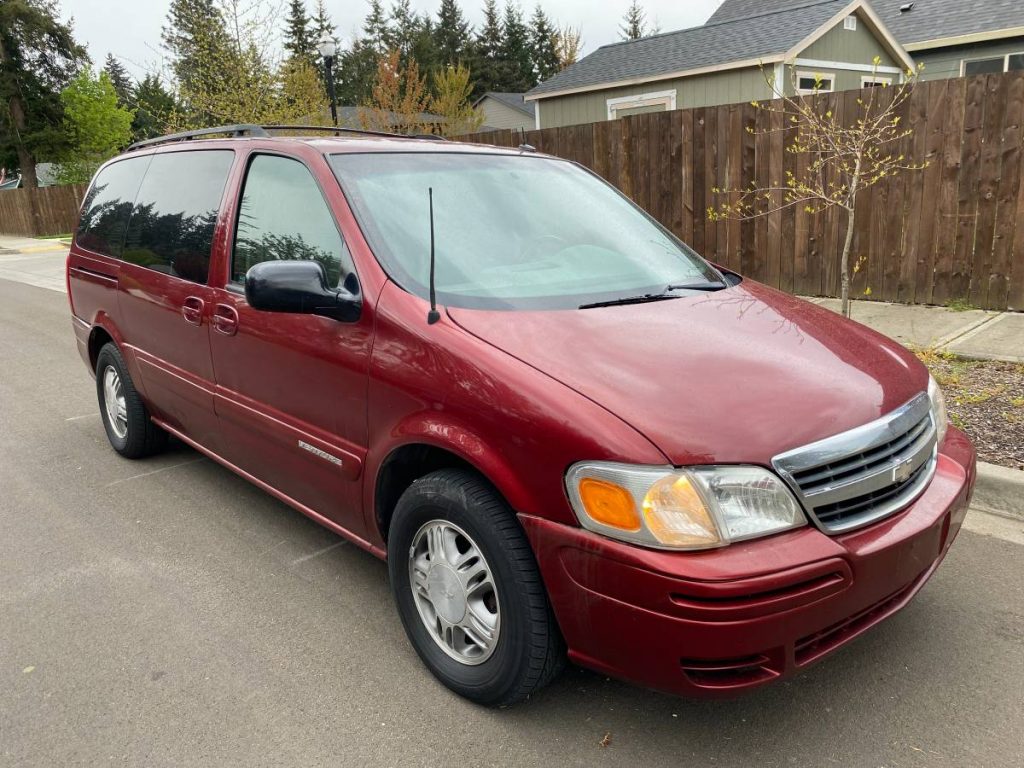 Fast-forward a decade and a half, and you arrive here, at the Chevy Venture. It’s only a little bit bigger than the old Grand Caravan – ten inches longer, three inches wider, and three inches taller – but the march towards bigger and heavier vehicles was only just getting into full-swing at this point. A new Toyota Sienna, for comparison, adds four inches in length and six inches in width to the Venture’s dimensions. Hardly “mini” any more. But with the added girth came added stuff, like a sliding door on both sides (sometimes power-operated), more easily configurable seats, vastly improved cupholders, and rear-seat entertainment options (more on that in a minute). 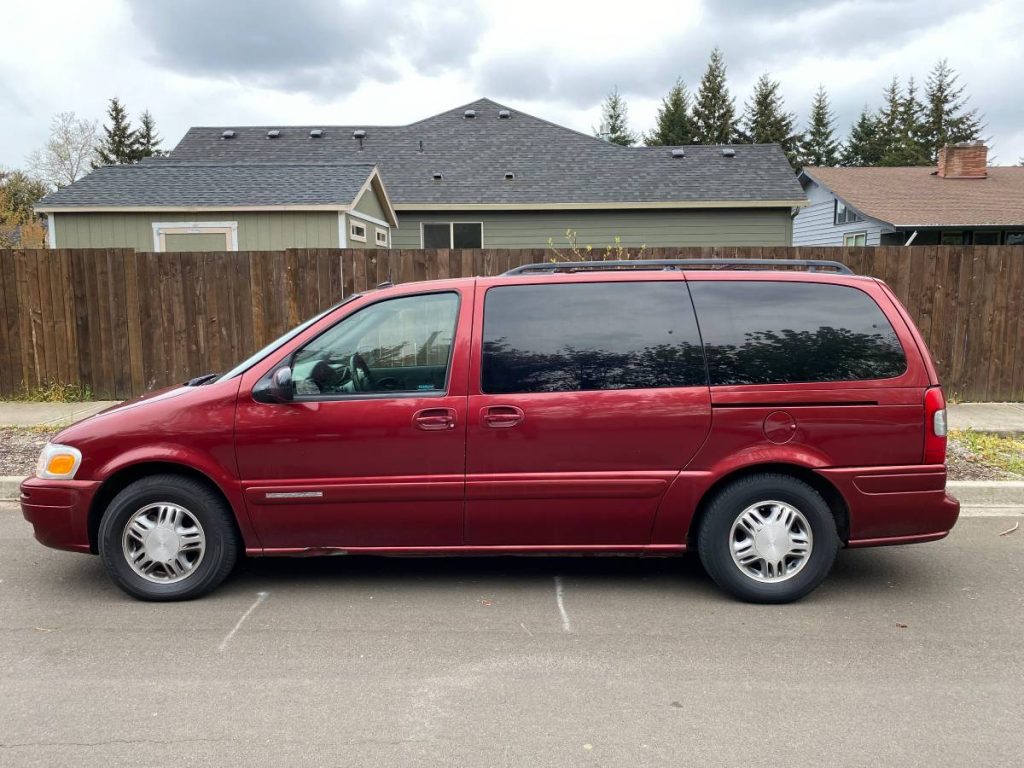 This Chevy has seen some use, but high miles aren’t necessarily a bad thing. Lots of miles means lots of service, or it wouldn’t have made it this far. The Venture uses GM’s ubiquitous 60-degree V6, 3.4 liters in displacement at this point, and it’s known to be durable and reliable, give or take an intake manifold gasket or two. The overdrive automatic has been known to develop an occasional slipping problem, but again, with 219,000 miles under its belt, someone was caring for it right. 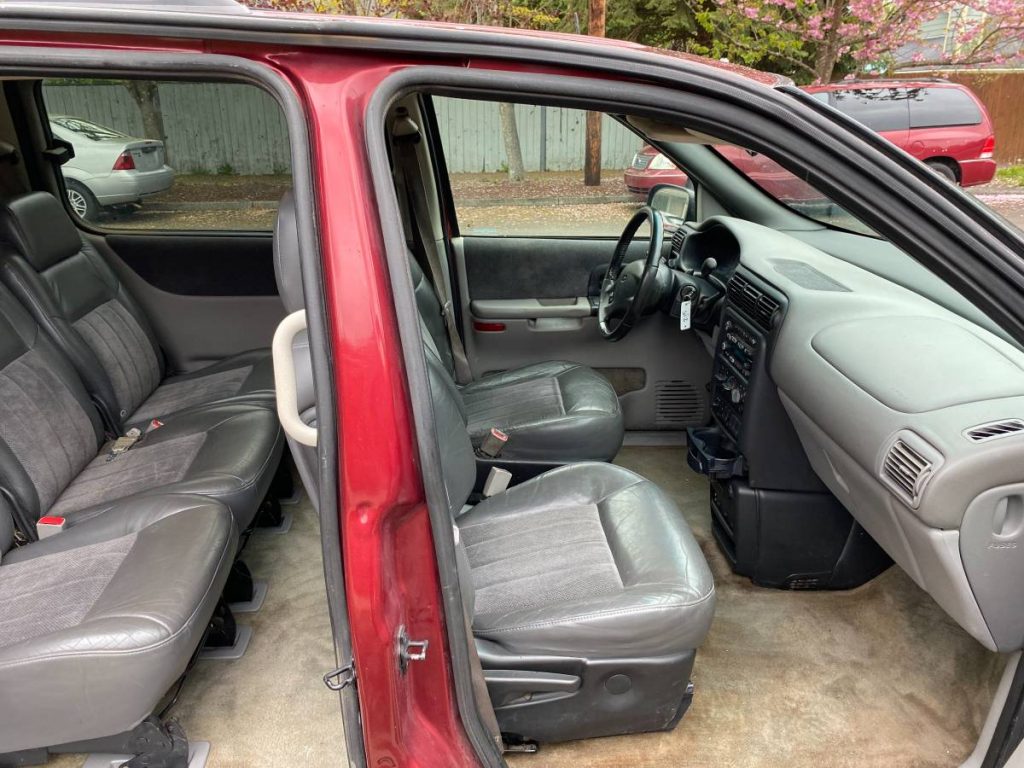 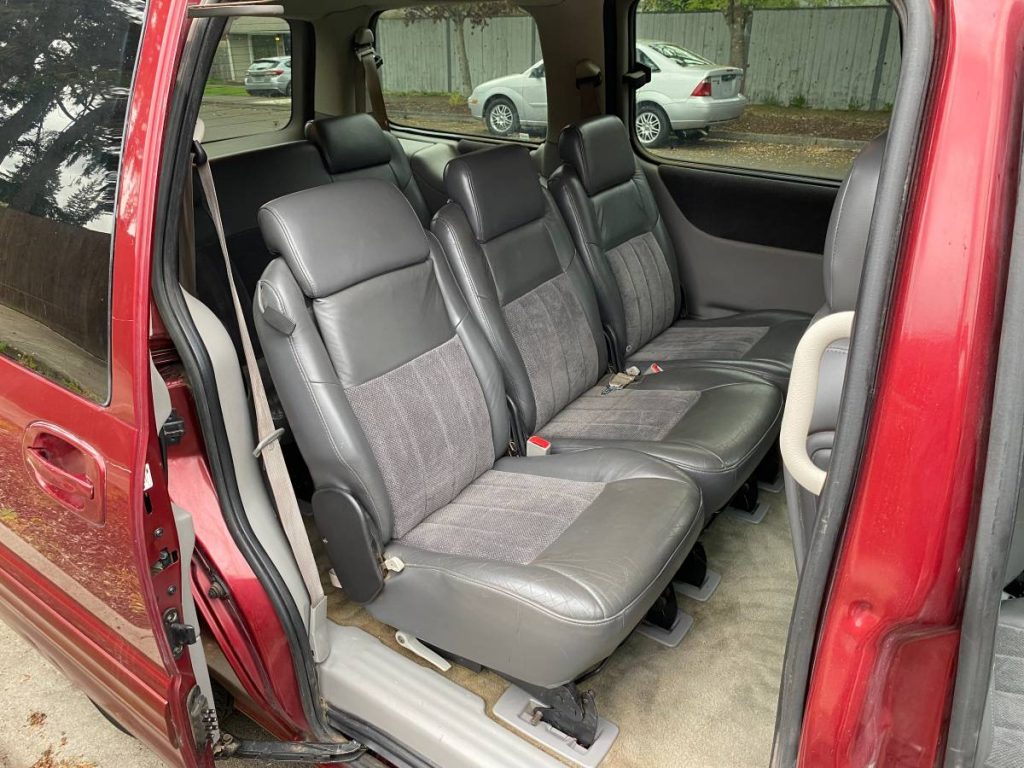 This van’s interior looks freshly scrubbed clean, which is nice, and the leather and suede upholstery is in good shape. Hell, the back seats don’t even look like anyone has ever sat in them. You can, of course, remove the seats or fold them flat to add cargo space. 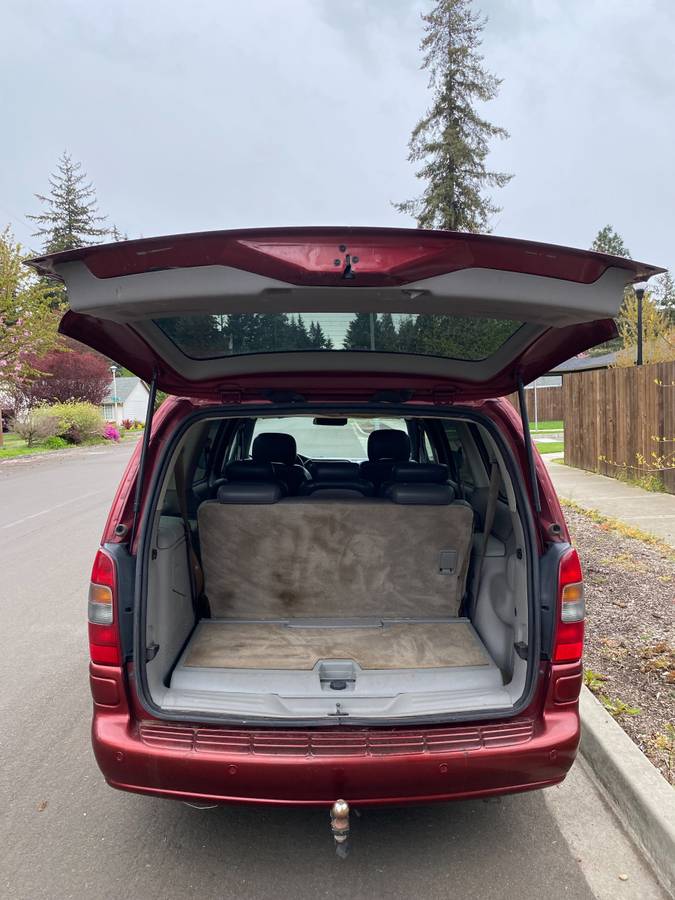 The Venture was available in a “Warner Brothers Edition,” which included a DVD player for the back seat, a bunch of Looney Tunes swag, and a special badge with Bugs Bunny on it. The original purchaser of this burgundy Venture does not appear to have sprung for that option, however, or if they did, they removed the badge. What a maroon.

You can go on hating minivans if you want, but I’m telling you: there’s a lot to like here. And these are just the cheap ones; spend a grand or two more and you can get a really nice, comfy, well-equipped minivan with all the toys. You just have to get over the stigma, and stop caring what people think. You know… settle down and grow up.

So what’ll it be, mac? Old Dodge, or not-quite-as-old Chevy?

[Editors note: Anyone who chooses the soulless Venture over that beautiful Chrysler box, please explain yourself in the comments. -DT]