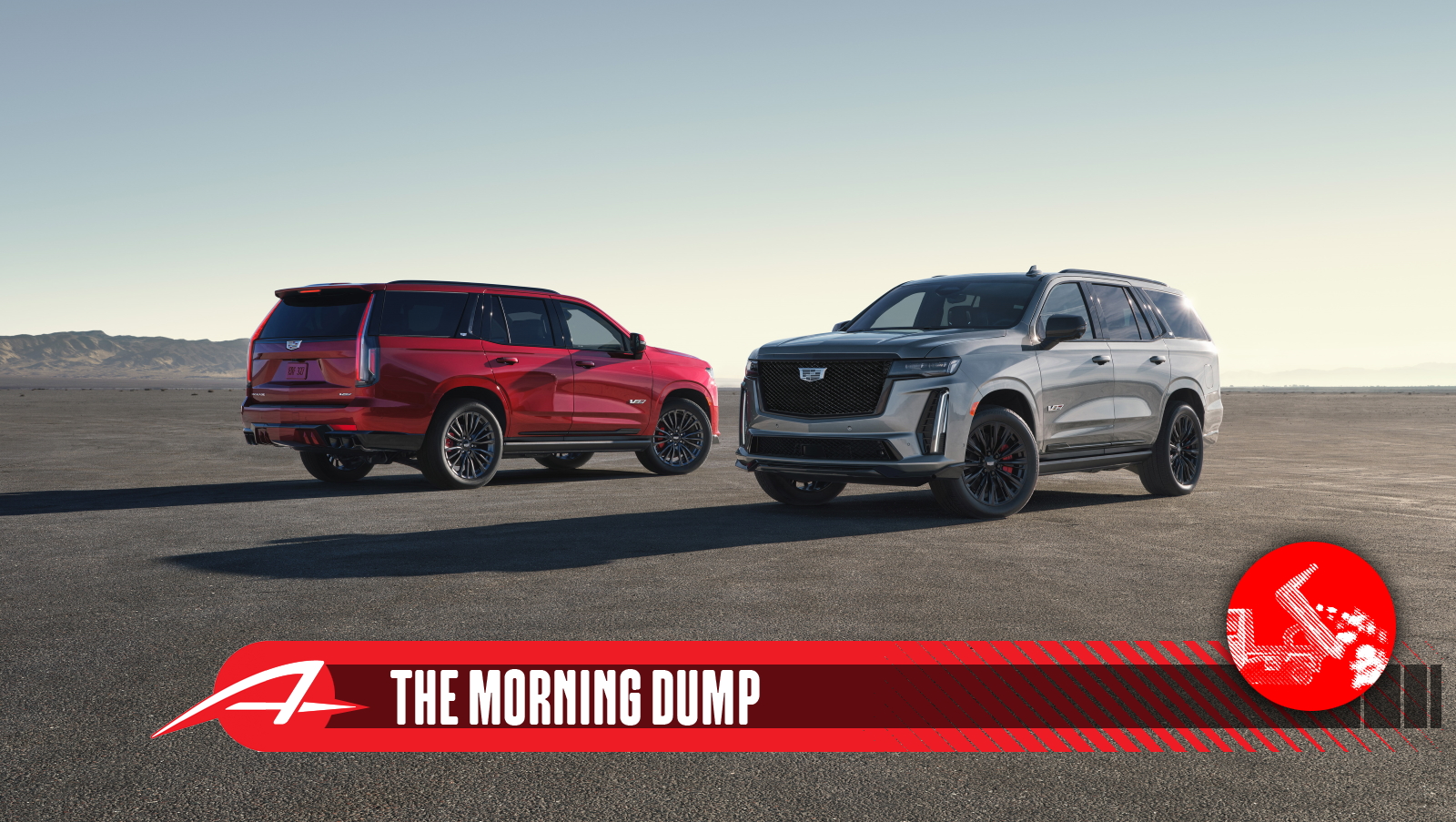 Cadillac gives the Escalade some muscle, Foxconn officially owns the Lordstown plant, Hyundai recalls a recall. All this and more on today’s issue of The Morning Dump.

The Cadillac Escalade-V Gets Ridiculous

If I’m being perfectly honest, nobody needs a 682-horsepower Escalade, but Callaway’s been making preposterously powerful Escalades for years so let’s see what GM can do on its own. Yes, more details have emerged about the Cadillac Escalade-V and oh boy, is it ever an exercise in excess.

Let’s start with that engine, a variant of GM’s LT4 6.2-liter supercharged V8. While the engine is largely similar to the one in the CT5-V Blackwing, the Escalade-V variant gets a bigger 2.65-liter TVS supercharger to crank out 682 horsepower at 6,000 RPM and 653 lb-ft of torque at 4,400 RPM. Very stout figures, yet surprisingly peaky for an SUV motor. Power makes its way to all four wheels through GM’s 10-speed automatic gearbox, full-time all-wheel-drive and a limited-slip rear differential. Now, Cadillac says in a press release that all of this put together is good for a 0-60 mph time of under 4.4 seconds and a quarter-mile ET of 12.74 seconds at 110 mph. Does that sound a bit mid to you, or am I just jaded by the likes of the Alpina XB7 which does the 0-60 dash in around four seconds flat?

Granted, even the fast Escalade is still an Escalade, so the cabin looks positively sumptuous. As the V-Series is the top-spec model, it gets all the toys from a 36-speaker AKG-branded audio system (another Harman International contraption) to massaging front seats. As is typical for a Cadillac, the Super Cruise hands-free Level 2 driver assist suite is optional and actually really nice to have. Super Cruise is one of the few Level 2 systems that’s actually competent on highway commutes, so it’s well worth the extra cash. Speaking of highway commutes, the Escalade’s up-level air suspension with magnetorheological dampers has apparently been re-tuned for the V-Series model. Hopefully this doesn’t negatively impact the Escalade’s incredibly precise body control and sublime ride comfort.

Alright, so the Escalade-V is big and pretty quick, but what does this giant slab of Americana retail for? Well it’s certainly not cheap. Pricing starts at $149,990 which is a lot, but at least Cadillac’s had the decency to include the delivery and destination fee. That puts the Escalade-V up against some seriously stiff competition. The aforementioned Alpina XB7 starts at $142,295 including destination and is absolutely fabulous from a speed and comfort standpoint. A Mercedes-AMG G 63 may have an abominable wait time, start at $157,500 excluding freight charge, and only include five seats, but it’s likely to hold value insanely well. Then again, neither of these vehicles offer the immense space of an Escalade, so I’m sure the Escalade-V will find buyers. Expect GM’s muscled-up Escalade to hit showrooms late this summer.

Honestly, it seems kind of insane for a company to base its entire brand around a former GM assembly plant and then sell the plant off, but hey. At an Automotive News-reported $230 million for a 6.2 million square-foot automotive assembly plant right in the heart of America’s northern auto corridor, Foxconn essentially scored the Lordstown, Ohio plant for $37.10 per square-foot. It seems like Foxconn got the better end of the deal here, gaining a fairly cheap factory and an assembly contract. Meanwhile, Lordstown will be responsible for everything else from engineering to homologation.

Local news publication Cleveland.com breaks down the thought process behind the deal, writing:

CEO Dan Ninivaggi told cleveland.com Wednesday that the deal gives Lordstown Motors scale. Partnering with Foxconn, one of the world’s largest manufactures, can ease supply chain issues, get vehicles to market quicker and make the process of doing so cheaper.

“The key theme in the entire transaction with Foxconn if it gives us a more flexible and less capital intensive business model,” Ninivaggi said.

So far, the Lordstown and Foxconn deal sounds a bit like Fisker contracting auto parts giant and G-Wagen screwer-together Magna International to build the Fisker Ocean compact electric crossover. What’s Foxconn going to be doing with the plant? Well, let’s first point out that the companydoesn’t really have much automotive experience. Just last year, The Verge attended a Foxconn EV event where Foxconn chairman Young Liu said “Our biggest challenge is we don’t know how to make cars.” That statement coming from a soon-to-be automobile assembler just a year ago feels a bit like waking up mid-surgery and hearing your surgeon say, “Oh, so that’s what a spleen looks like.” Not particularly confidence-inspiring, is it?

Then there’s the question of commitment. Foxconn has demonstrated some pretty sketchy behavior in regards to the company’s $10 billion, 13,000 employee Wisconsin-based LCD factory that’s now more like a $672 million, 1,454 employee factory. Oh, one last thing, let’s circle back to Fisker. According to Automotive News, Fisker’s sub-$30,000 Pear electric vehicle is supposed to be assembled by Foxconn in Lordstown in just two years. Yeah, this could get interesting.

While recalling product is bad enough, recalling a recall really doesn’t sound great. For 2013 to 2014 Hyundai Sonata owners, this recall of a recall will seem almost typical. Did I mention that not implementing the new recall could result in fiery death?

Hyundai rushed headfirst like Leeroy Jenkins into direct injection engines about a decade ago, and it didn’t go so well. While engines blowing from casting issues is what everyone knows these older Sonatas for, this latest recall specifically involves the fuel system. Back in 2020, Hyundai identified premature degradation of the low-pressure fuel line’s junction at the fuel pump. At the time, the official fix was to replace the fuel line should it be cracked and simply apply heat-resistant tape at the fuel pump connection should the fuel line not be cracked. If you’re thinking that the second fix is some Mickey Mouse high school bodge behavior that won’t actually prevent the fuel line from cracking, you’re right. As a result, recall documents detail a new procedure of proper fuel line replacement and 215,171 2013 and 2014 Sonatas are affected. While only one percent of recalled models are expected to experience a fiery fuel leak, a one percent chance of possible fiery death is honestly a bit too high. Recall notification letters will be sent out to owners on July 5, at which point Sonata owners will be able to bring their cars in for repair and enjoy a nice cup of dealership coffee.

Canoo Is Up The Creek Without A Paddle

We at The Autopian are big fans of EV startup Canoo. Its tiny cab-forward prototypes are practical and endearing in all the right ways. Unfortunately, there’s a chance we might never see mass-produced Canoo vehicles. A recent regulatory filing paints a picture of the EV startup’s current state, and it really isn’t pretty.

Two years ago, things looked cushy for Canoo. In 2020, the EV startup went public by merging with a blank-check company at a $2.4 billion valuation. Well, a lot can happen in two years. 2021 fiscal year-end reports show that over the past year, Canoo’s net losses have ballooned from $15.2 million to $125.4 million with no revenue to show. According to Canoo’s latest regulatory filing, “If we are unable to obtain sufficient funding or do not have access to capital, we will be unable to execute our business plans and could be required to terminate or significantly curtail our operations and our prospects, financial condition and results of operations could be materially adversely affected.” Yikes. While Canoo may be down, it isn’t out yet. TechCrunch reports that during an investor call on Tuesday, Canoo voiced expectations that a $300 million private investment in public equity will clear sometime this week, although that may not be enough to save the startup. Here’s hoping that Canoo can pull things together and we can see more funky electric vans that just the Volkswagen ID.Buzz rolling around in the future.

Whelp, time to drop the lid on this edition of The Morning Dump. While the Cadillac Escalade-V looks awesome, I can’t help but feel that it’s a bit pointless. A 0-60 time of around 4.4 seconds isn’t lightning fast these days. It’s more Lightning fast, on par with estimates for Ford’s electric F-150. Moreover, an Escalade feels like an SUV for wafting and after driving the diesel model, I can’t think of a better seven-passenger road trip vehicle. Toys, space and the highway fuel economy of a turbocharged compact crossover? Yes please! I just don’t see any need for the Escalade-V but I’m glad it exists, which begs the question. What’s a vehicle you’d likely never buy but are still glad exists?

Thomas is a Nu Rave-blaring, heel-toe downshifting, maple syrup-swilling, chassis-geeking, junkyard parts-hauling, floppy-haired scenester who's been writing about cars since college. His current ride is a 2006 BMW 325i with the six-speed manual gearbox. Instagram: @thomas.hundal Twitter: @thomashundal
Read All My Posts »
PrevPreviousMaroon Minivan Madness: Old-School Dodge Caravan Or Newish Chevy Venture?
NextHere’s Why You Should Slow Down To Save Gas According To An Aerodynamicist And Powertrain EngineerNext