Mazda 3 Or Chevy Prizm: The Hunt For A Cheap, Reliable Daily Driver In An Expensive Used-Car Market 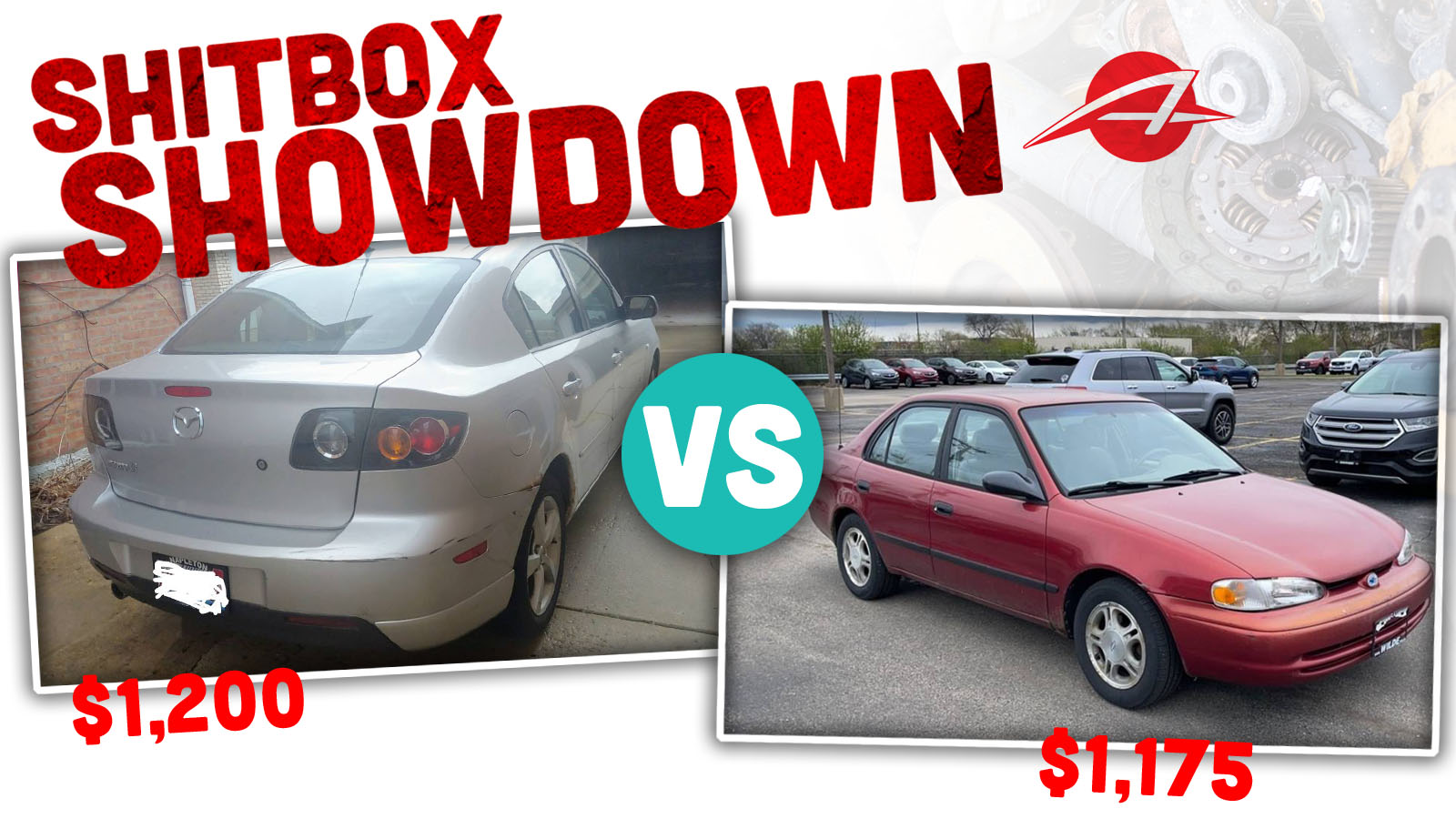 Welcome back to another week of Shitbox Showdown! We’re doing a bit of a theme week this week in an attempt to answer the question: In this age of insane used car prices and low inventories, is it still possible to find a viable daily driver for next to nothing? Just what does the bottom of the barrel look like these days? To find out, we’ll look at two cars from each of four cities, and at the end of the week, we’ll choose the best of the worst.

Bit of a Saab story for our topless Swede. There was no lack of support for it, but it’s hard to beat a good, honest old truck. The ex-fleet F-150 is our second Shitbox of the Week winner.

Back in the dark days before the internet, when AutoTrader was printed on actual paper, there was a section called “Transportation Thrifties.” It’s where you looked if you just needed wheels to get around — something that you could drive as-is for a week or two until you got another paycheck to start fixing stuff. Back when I was shopping those pages, I saw a lot of Ford Fairmonts, Dodge Darts, Oldsmobile Omegas, and similar cars with alliterative names. The cars have changed, but the need for cheap rides has not, so let’s open up our metaphorical paper to the Thrifties and see what we can find.

First stop: Chicago. My kind of town. I’m from here originally (well, the west suburbs, technically). I got lost in the Field Museum of Natural History on a field trip in fourth grade, I saw Michael Jordan score his 20,000th career point in the old Chicago Stadium, and I have a usual Portillo’s order. (Italian beef, dry, with sweet peppers and a side of onion rings.) There are two seasons in Chicago, winter and construction, and they are both hell on cars. From this crucible of pothole filler and road salt, I have extracted two ingots of potential used-car gold; let’s see what you think of them. 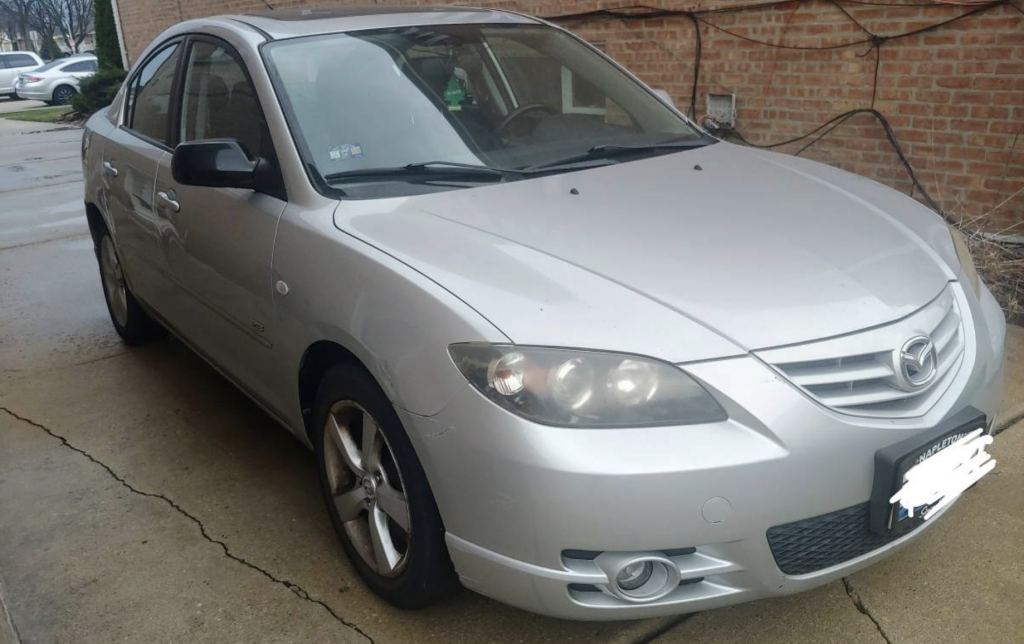 Runs/drives? Ad says yes, but no other details are given 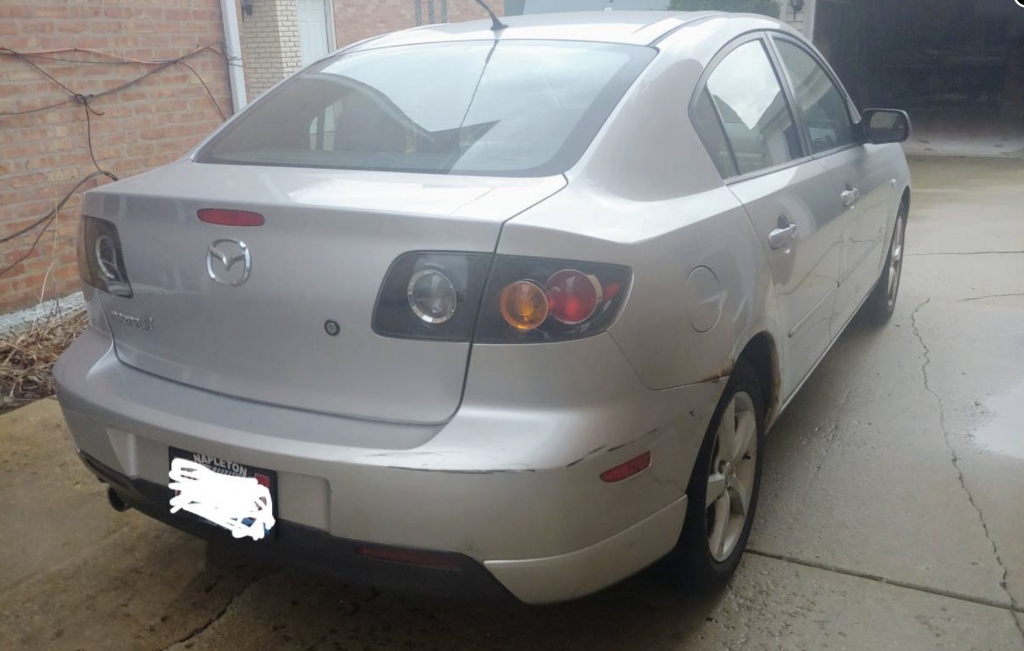 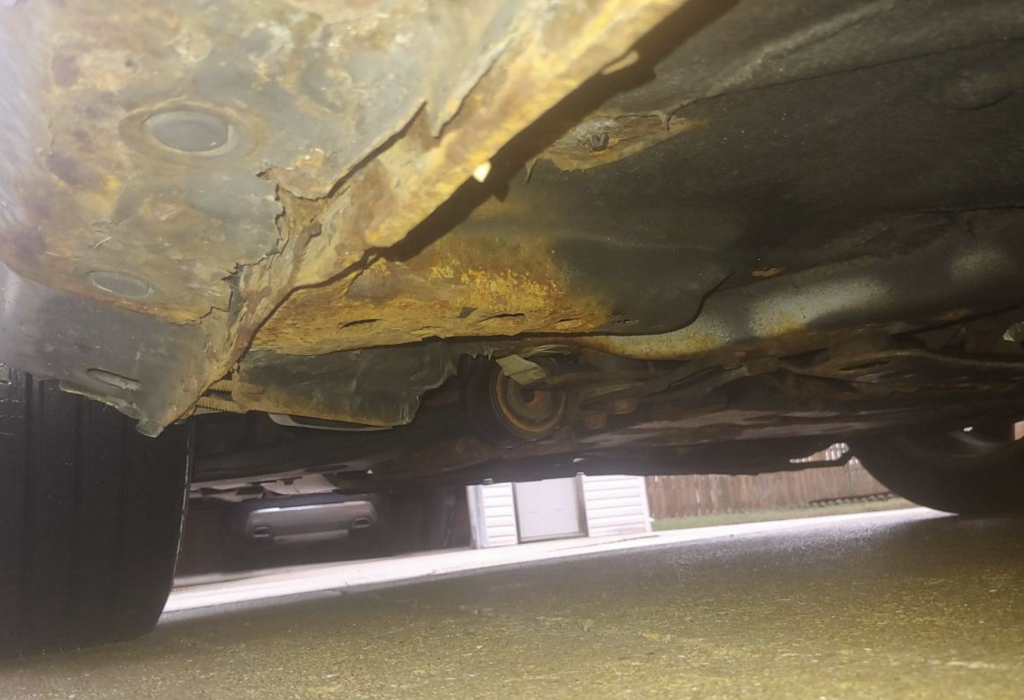 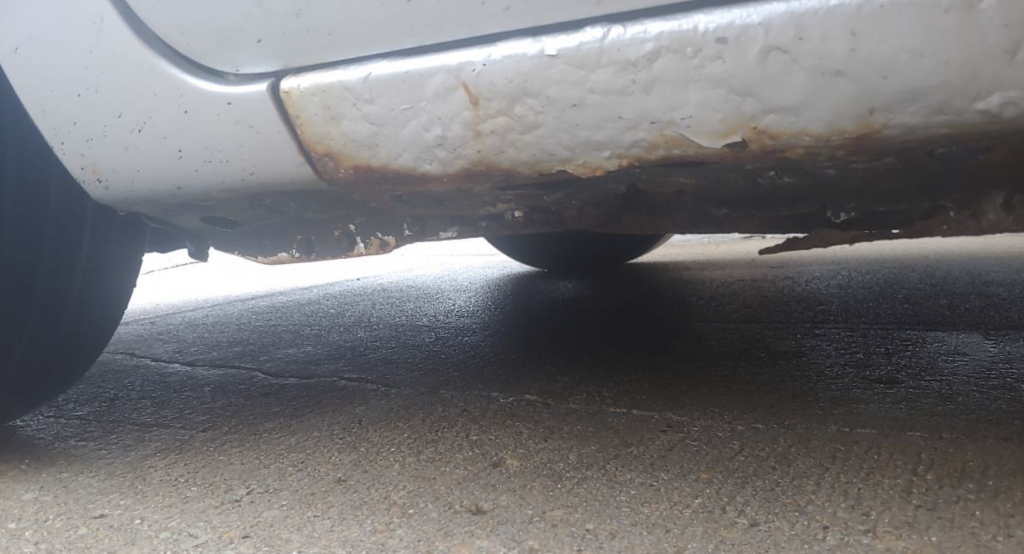 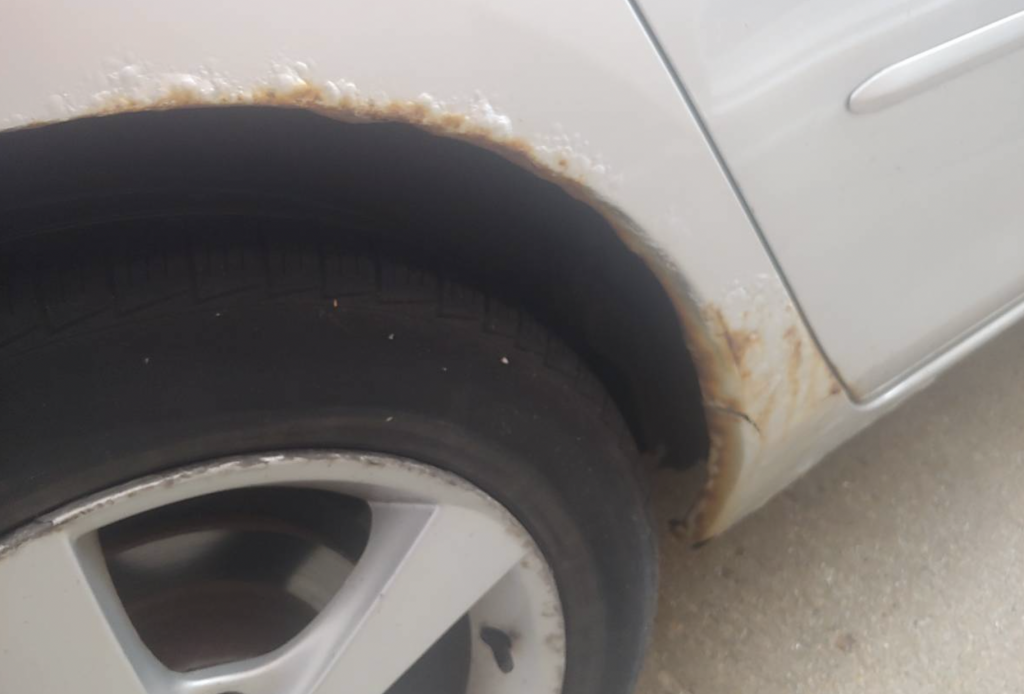 Mazda’s small cars have gained a reputation over the years as reliable, fun-to-drive, good-performing miniature sports sedans that dissolve like tissue paper when exposed to road salt. This one appears to be no exception: its inevitable date with the tinworm is well underway, but structurally it sill looks more or less there. You wouldn’t make any long-term plans to restore it, but it should get you around for a couple more winters yet. 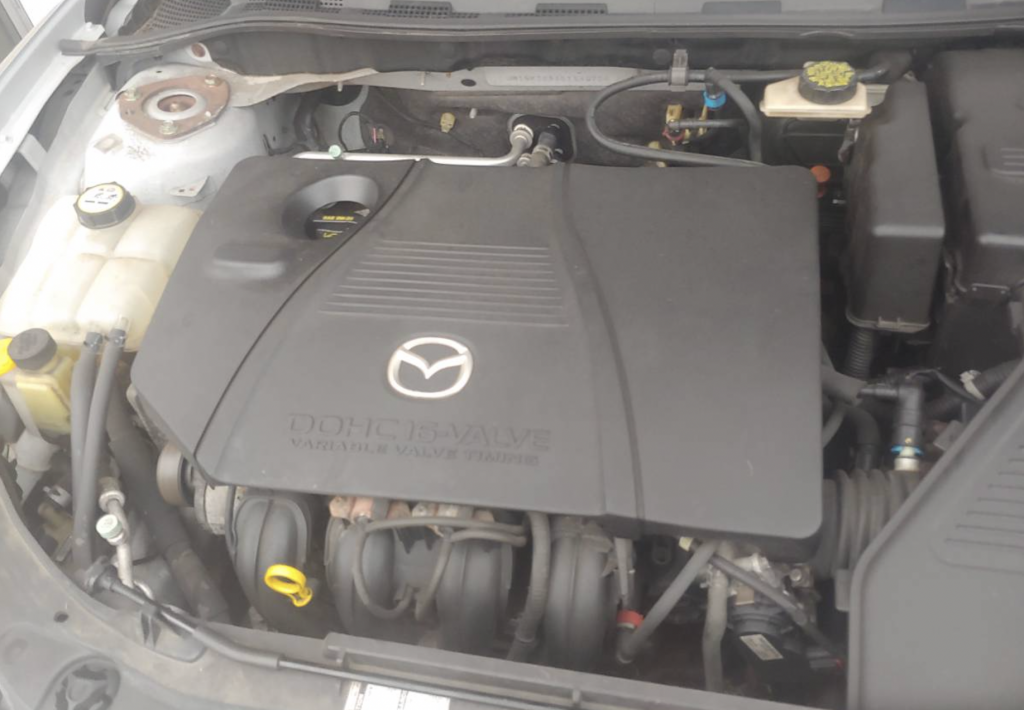 Mechanically, these cars have a good record; Mazda’s MZR series four-cylinders are stout dual-overhead-cam units (with timing chains, not belts) that were also found under the hoods of zillions of Ford Focuses (Foci?) and 2000s Rangers under the Duratec name. It’s a good, revvy engine that gives decent performance and is easy on gas. This one is backed by an automatic, which saps some of the fun but it makes life easier on the tollways in rush-hour traffic. 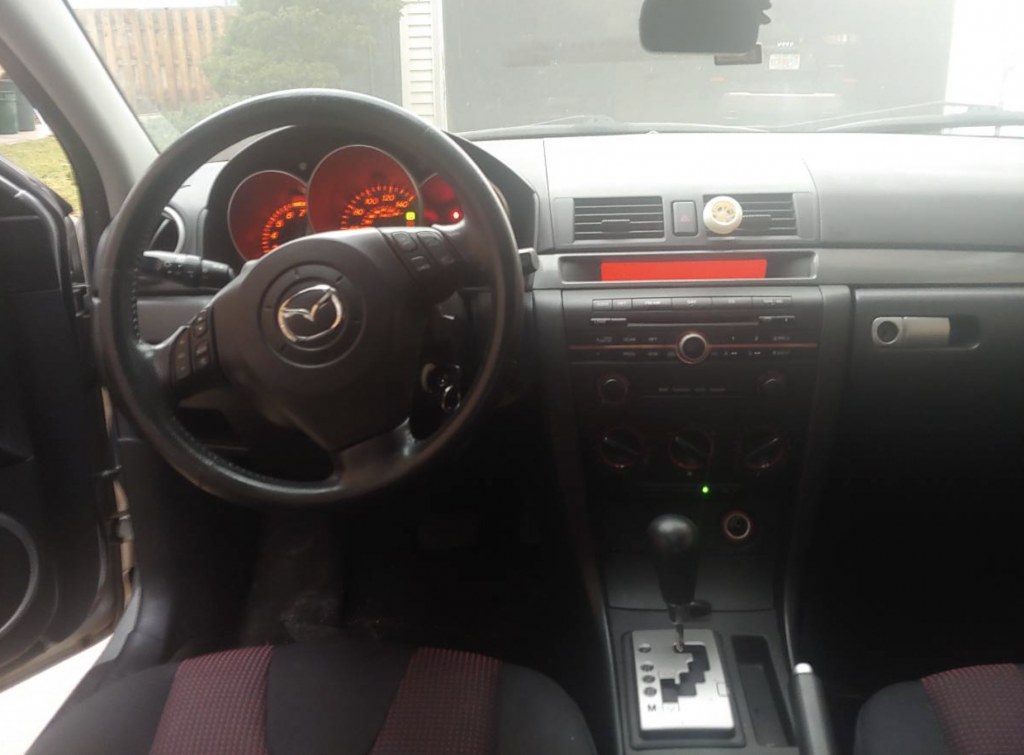 The ad is scarce on other information about this car, but then again, the only way to really find out what you need to know about a potential beater is in person anyway. Start it up, drive it around the block, push buttons, turn knobs, see if stuff works. Accelerate hard and brake hard, take a corner or two too fast, listen for clunks or growls or vibrations.

Really, that’s about all most sellers will let you do for a car this cheap; don’t plan on taking it anywhere for a pre-purchase inspection. And don’t expect any sort of discount for non-functional accessories. (Who do you think you are – Abe Froman? The sausage king of Chicago?) It is what it is. Take it or leave it. 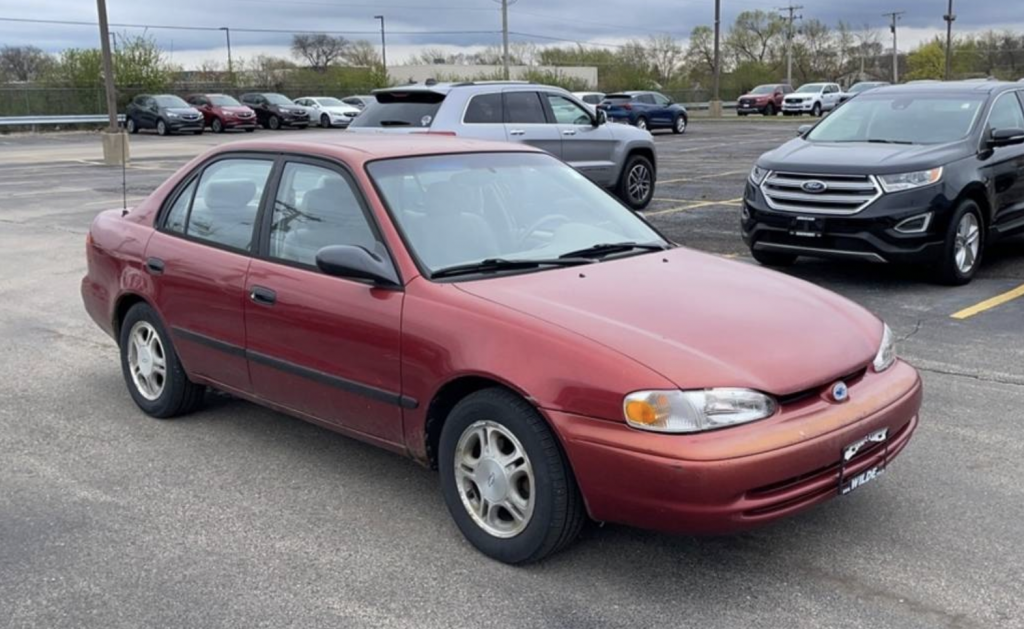 Runs/drives? “NO PROBLEMS” the ad says 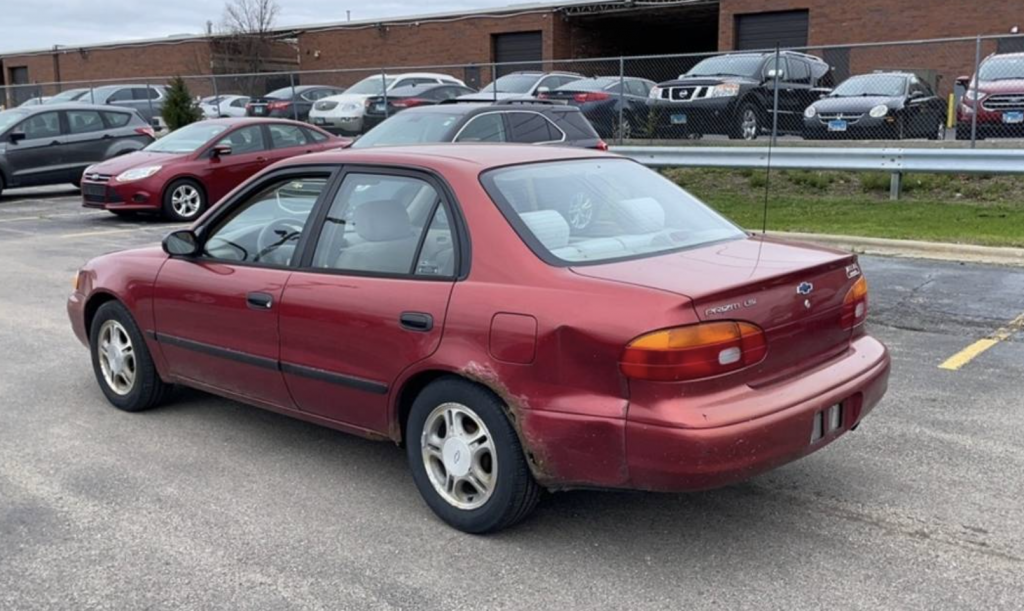 The seller has this car listed as a “Geo Prizm,” but GM dropped the Geo nameplate in 1998 and ported all the remaining vehicles in the lineup over to Chevy. Everyone still called them Geos, though, so the seller’s confusion is not surprising. But what this car really is, for all intents and purposes, is a Toyota Corolla — a car with a reputation for being invincible, if dull. Prizms were built alongside most U.S.-spec Corollas in the joint GM/Toyota NUMMI plant in California, which is now home to Tesla’s production line.

This one is from the final year of the Prizm, 2002; the vehicle sits on Toyota’s E110 Corolla platform. It has a variable valve timing-equipped 1.8 liter four (oooh, fancy) connected to a four-speed automatic. Nothing too exciting, but it’ll keep sipping gasoline and pulling this little Prizm along for another 100,000 miles at least, if rust doesn’t kill the car first. 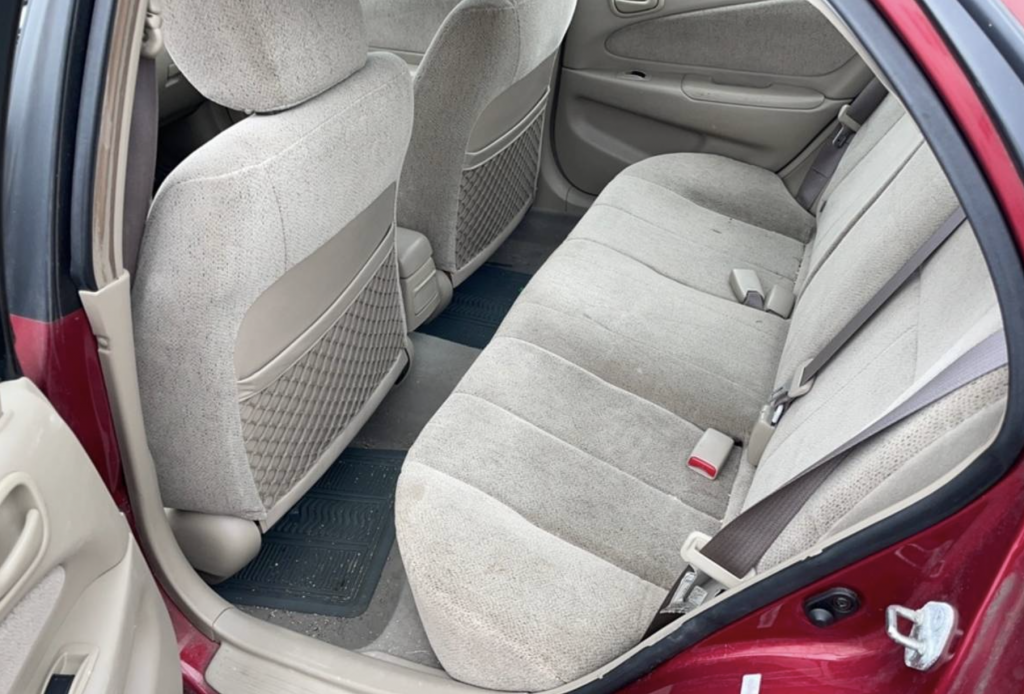 Actually, the rust doesn’t look too bad on this Prizm yet. The color makes it hard to tell, but I bet there’s more good metal left under this one than the Mazda. The worst rust I see is on the left rear: The wheel arch is unsightly but no big deal. Though that left rear jack point might be compromised.

There are a couple other battle scars, but those can be an advantage in Chicago traffic. The ugliest car goes first, if it wants to. Besides, think back to the old Kenner Star Wars toys: there was an X-Wing Fighter,and a “Battle-Damaged” X-Wing Fighter, and we all know which one was cooler.

And there you have it: just about the two cheapest potential daily rides I could find in the “City of the Big Shoulders.” Which one would you rather be in, runnin’ south on Lake Shore Drive, headin’ into town?