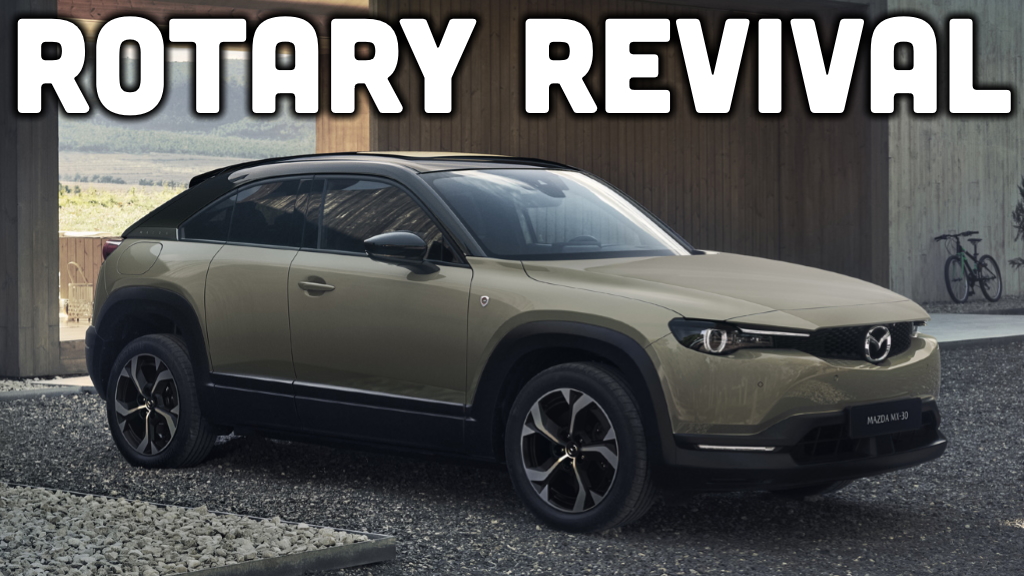 This is not a drill. The Wankel rotary engine is back. After many rumors and patents, we can officially say that the Mazda MX-30 R-EV is real, and upon first glance, it looks amazing. We don’t have many photos of the R-EV model at the moment so we’ve subbed in some photos of the regular EV model, but we’re adding pics as quickly as we can, so hold tight and read on for more details. 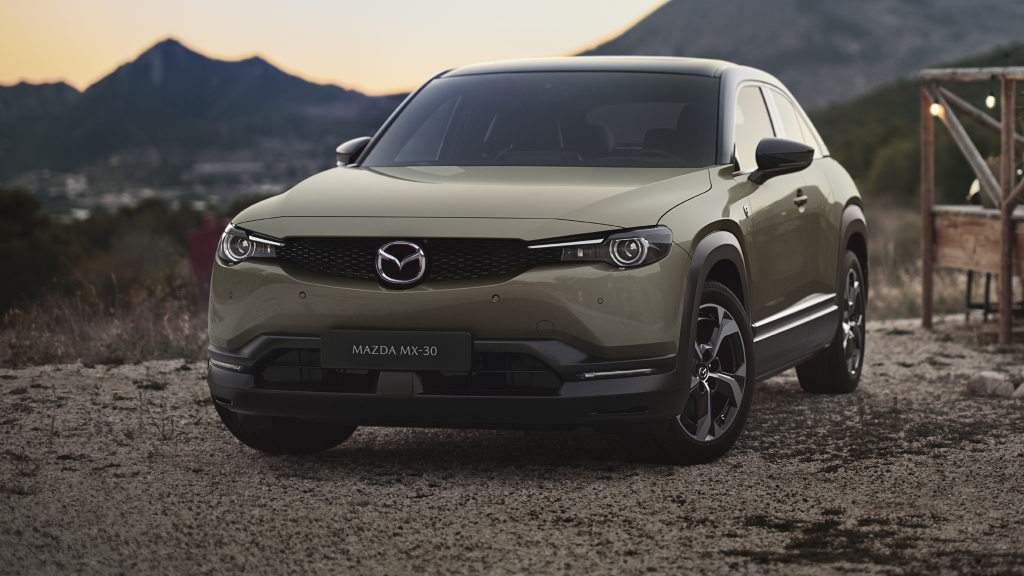 Why is it that the stubborn nonconformists of the car industry are often the ones we as enthusiasts want to root for? From Saab’s pathological obsession with safety to TVR’s devil-may-care attitude towards driver aids, marques that do things differently often burn their candles twice as bright for half as long, attracting legions of fans long after corporate doors are shut. Mind you, there’s an exception to every rule. Mazda has been around for 102 years, is still fiercely independent, and is willing to stick with and develop crazy ideas everyone else gives up on until they actually work.

Not only did this small Japanese company single-handedly revive the open-topped sports car, it made the first Miller cycle engine in a production car, figured out homogeneous charge compression ignition in a gasoline engine [Ed Note: Though we have yet to see that in the U.S. -DT], and kept a small team of engineers working on the Wankel rotary engine long after emissions regulations forced the rotary-powered RX-8 coupe off sale in 2012. Eleven years after being told we might never see a new rotary-powered car again, Mazda has pulled off the improbable and stuffed a brand new rotary into the MX-30 R-EV. 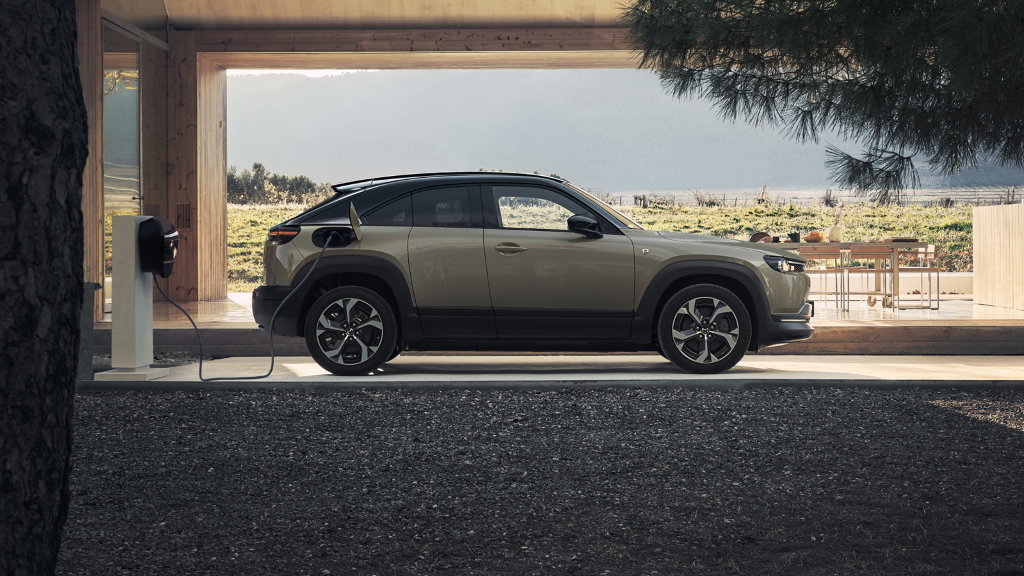 Mazda isn’t pitching the MX-30 R-EV as an EV with a gasoline range extender, but instead as a series plug-in hybrid. Why the distinction? Well, this isn’t like a BMW i3 with its two-cylinder scooter motor range-extender. Let me explain.

While the standard MX-30 EV is often criticized for its small 35.5 kWh battery pack, the MX-30 R-EV goes even smaller with a 17.8 kWh battery pack offering just 53 miles (85 km) of electric range on the WLTP cycle. While this seems extremely strange, things are about to get stranger. While BMW gave the i3 a tiny 2.4-gallon fuel tank, Mazda’s giving the MX-30 EV a full 13.2 gallons (50 liters) of fuel to play with. 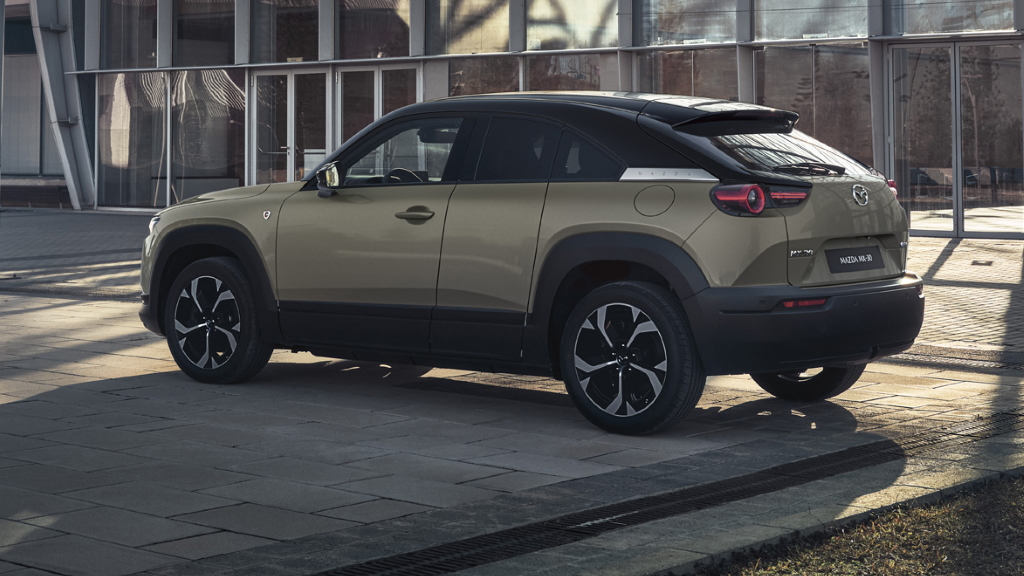 Although that may read like a bad joke about rotary engine fuel consumption, bear with me here. While most enthusiasts are familiar with the RX-7’s two-rotor Wankel design, the MX-30 should be the first production car sold to consumers with a single-rotor engine since the NSU Spider. Mind you, the 8C rotary generator in the MX-30 is a little bit different than the rotary engines we’re used to. 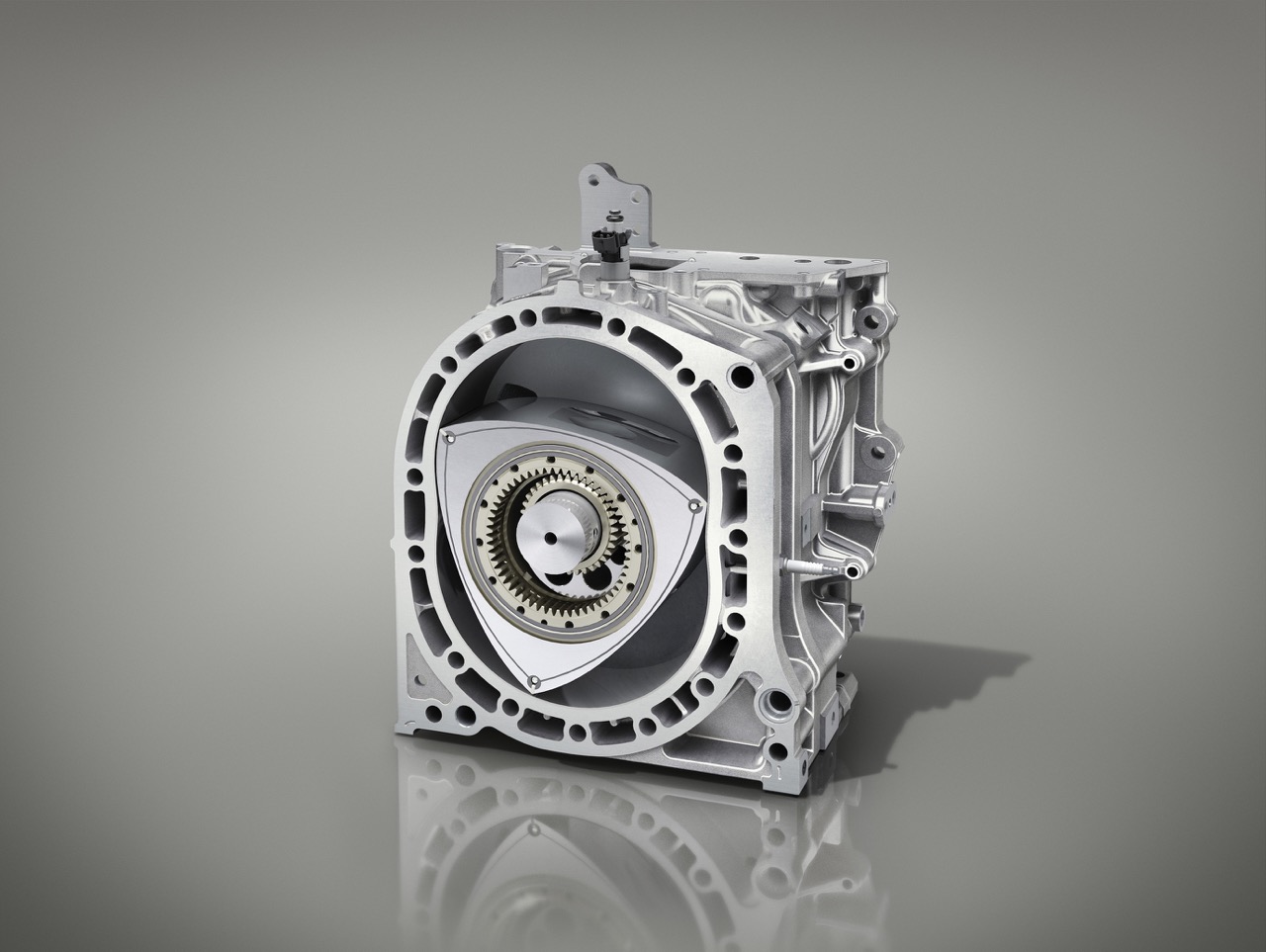 For starters, the engine doesn’t drive the wheels. It only serves as a generator connected to a motor/generator unit to send power to the battery pack. The battery pack then provides juice to an electric motor which powers the wheels. This means that despite burning gasoline, the MX-30 R-EV should theoretically have the seamless power delivery of an EV, and it should be able to keep the Wankel engine at its “sweet spot” for efficiency for a significant portion of its on-time. 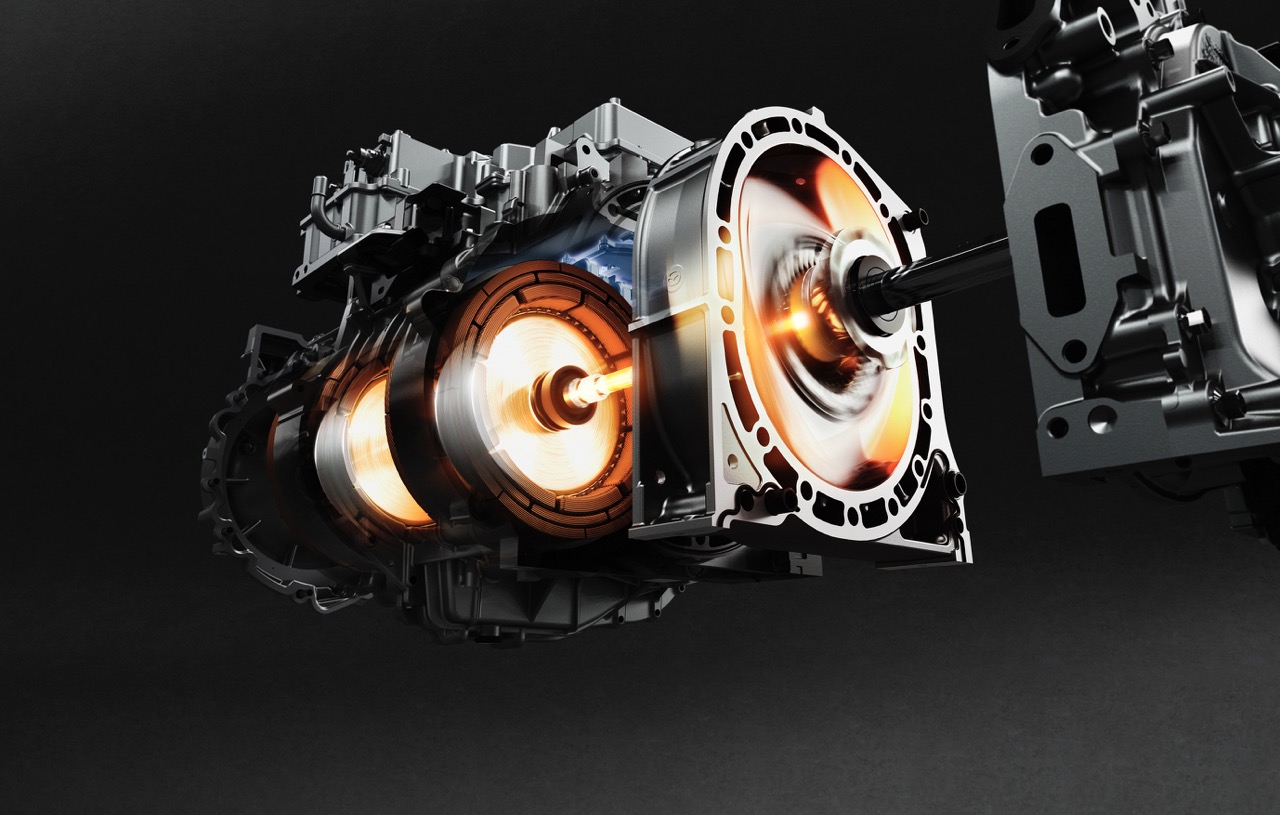 As for deeper details on that rotary engine, there’s the presence of direct injection, something never attempted before on a production rotary engine. The side housings are aluminum and coated with plasma for low weight and friction management respectively, all while being just 80 mm wide. For the sake of longevity, the apex seals are 25 percent wider than the ones on an RX-8’s RENESIS engine, clocking in at 2.5 mm. The result is 73.7 horsepower from just 830 cc of displacement. Curiously, although rotary engines love to rev, Mazda claims that peak power hits at just 4,700 RPM. That might sound weird for a high-revving Wankel, but it should translate to very low noise. Mazda’s doing so much crazy stuff with rotary engines right now, I urge you to check out Patrick George’s article on Mazda’s contraptions. 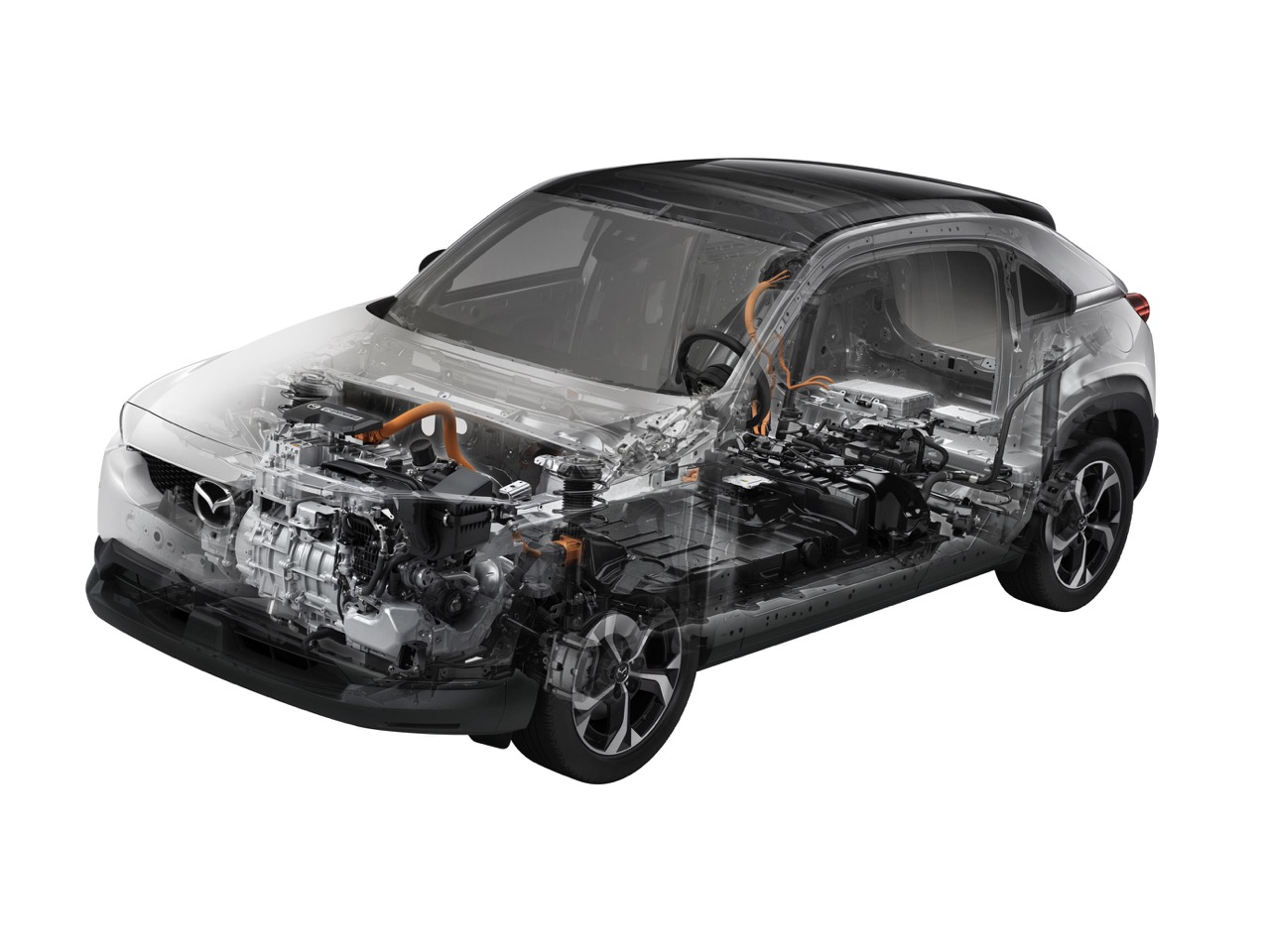 Perhaps the most impressive statistic is that the 8C single-rotor engine weighs just 214 pounds (97 kg). Combine that with the substantially smaller battery pack compared to the EV model, and the MX-30 R-EV could end up being a surprisingly light plug-in hybrid. 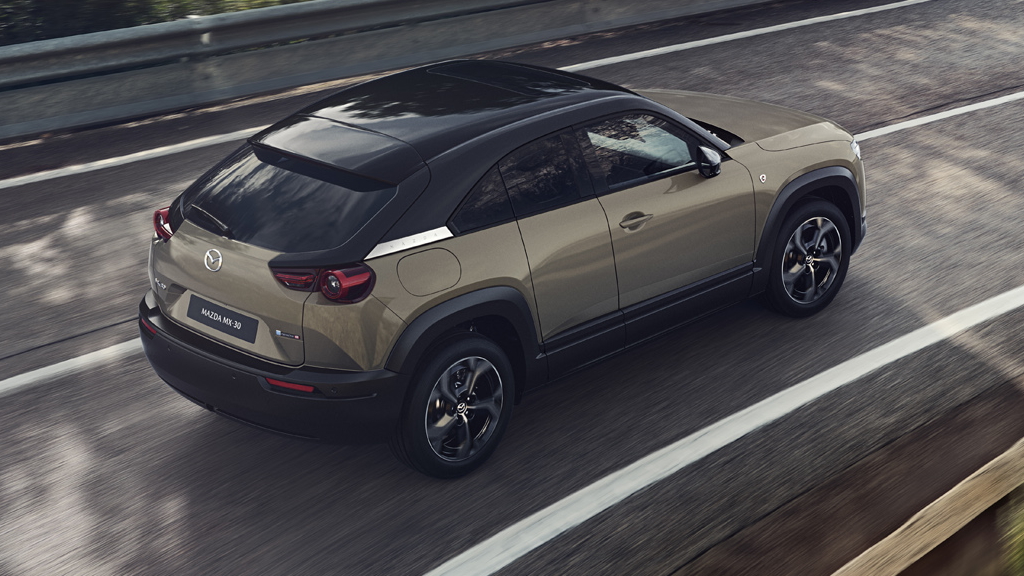 So what might all of this mean in the real world? Well, suddenly, the MX-30 R-EV makes sense. Not only should it offer a ton of urban range compared to most plug-in hybrid cars, it has the fuel capacity to really hit the open road. Speaking of being out on the open road, the MX-30 R-EV has several neat powertrain functions. It can run on battery power alone, use the rotary engine to charge the battery in a dedicated Charge drive mode, or blend battery power and motor use depending on throttle position. Think of that last one as the kickdown on an automatic car, just re-imagined. The car looks at the power you desire, then figures out how much gasoline assistance is needed to deliver it. 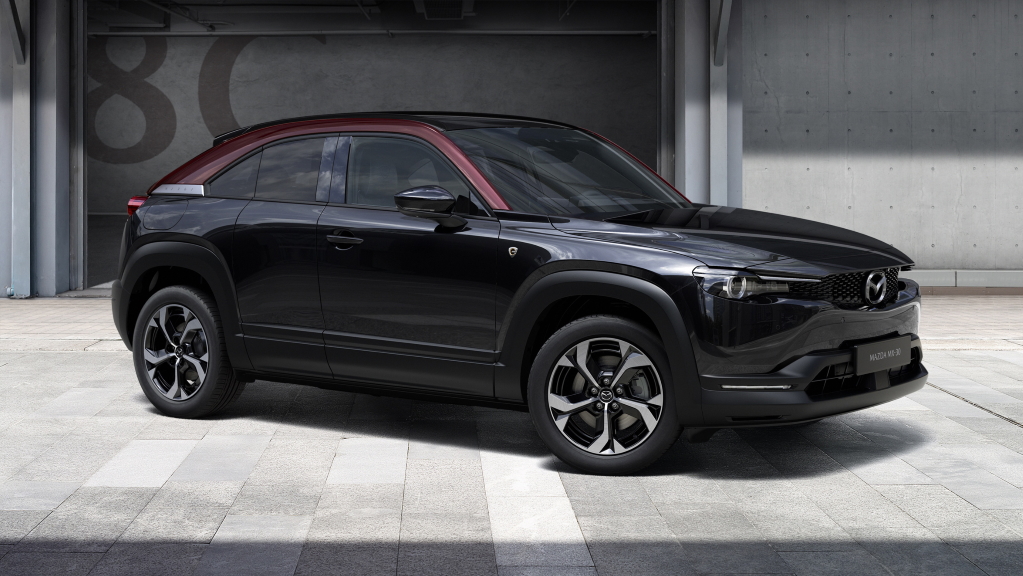 As for the rest of the MX-30, it’s Mazda flexing what it can do. From the sleek lighting to the unique freestyle doors, the MX-30 is hard to categorize yet still pleasant to look at. Speaking of exterior treatments, Europeans will get a sweet Edition R model in black with a Maroon Rouge Metallic roof as a throwback to the Mazda R360 Coupe. 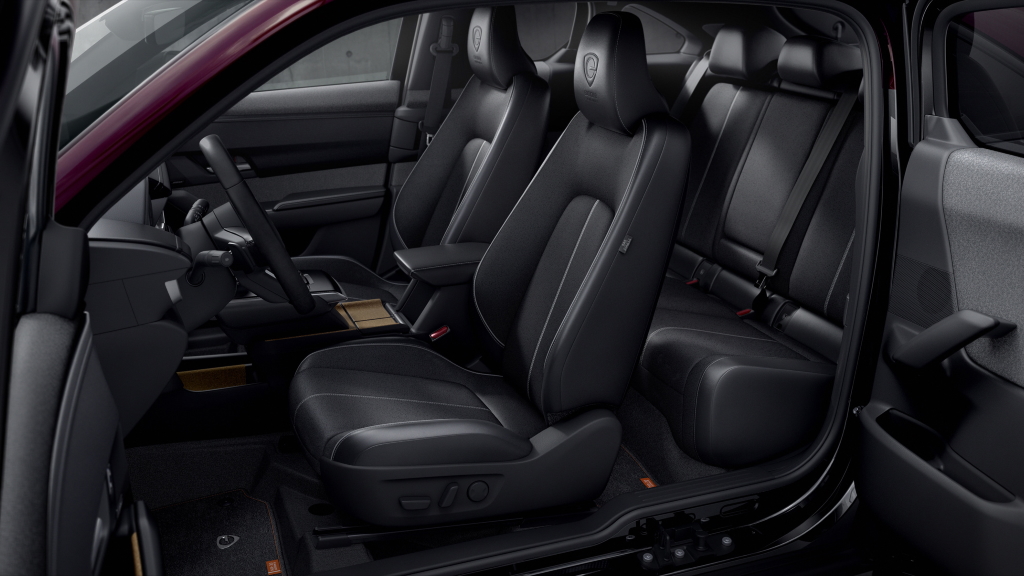 Interior materials on the MX-30 are brilliant, with cork, metals, and leather coming together for a warm ambiance. Rear seat space is a little tight, but the MX-30’s fairly small footprint means it probably isn’t a family vehicle anyway.

Think of the MX-30 R-EV as where the old Mazda and new Mazda meet. High-style combining with highly unique engineering to create something totally different. While the MX-30 REV will first go on sale in Europe, don’t be surprised to see it in North America at some point. Pricing hasn’t been revealed yet, but don’t expect it to be super cheap. For context, the standard MX-30 EV gets a little bit of a price hike for 2023 to $35,385 in America and $44,645 in Canada, but Canadians get the benefit of nationwide availability. It’s amazing that the Mazda MX-30 R-EV exists at all, and for American sales to be planned has us feeling oh so lucky.

Here’s How Mazda Packed An Entire Car, Turn Signals And All, Into A Suitcase

Thomas is a Nu Rave-blaring, heel-toe downshifting, maple syrup-swilling, chassis-geeking, junkyard parts-hauling, floppy-haired scenester who's been writing about cars since college. His current ride is a 2006 BMW 325i with the six-speed manual gearbox. Instagram: @thomas.hundal Twitter: @thomashundal
Read All My Posts »
PrevPreviousTesla Massively Lowers Prices Overnight, Makes Model Y And 3 A Crazy Deal
NextHumans Don’t Get Necks But Animals Do: Cold StartNext