Of all the electric vehicles on sale right now, none have evoked as much of a collective “Huh?” as the Mazda MX-30. With its crossover stance, tight coupe-like body, rear-hinged “freestyle” double-doors and a battery good for only about 100 miles of range, it has all the chaotic energy of that guy who shows up to class late, asks to see your notes and says “What’d I miss?” every. Single. Day.

But unlike the guy who had no business taking an 8 a.m. class, Mazda has no choice but to electrify, and that’s a tough proposition for a small, independent automaker that isn’t flush with investor cash—one of the last, really. So can Mazda’s only EV (for now) be more than it is? It says yes, and one answer for now at least is bringing back the rotary engine as a range extender, not unlike the Chevrolet Volt or the BMW i3. And though a “new rotary engine” has been rumored since the Fast & Furious movies were still about street racing, Mazda’s confirmed it’s actually doing this.

Now, via a patent scoop from CarBuzz, we can see how unusual this new rotary range extender for the MX-30 will really be. And the end result—all that stuff I listed in my lede, plus the magic spinning triangle engine—could make this the weirdest new car on the road. (Seriously, what could be weirder than this right now? I’ll wait.)

The site says this new Mazda rotary aims to be significantly more efficient than its notoriously not-so predecessors by adding something akin to variable valve timing. I’m just going to quote the article rather than screw this up by attempting to explain it myself:

According to the patent, the first step towards optimizing the new rotary’s efficiency is by employing a dual-intake port arrangement. The rotor tip passes the primary port first before passing the secondary port a little further in its rotation. The secondary port prolongs the “intake stroke,” allowing more air into the combustion chamber in high-power demand situations.

However, the secondary port also interferes with low-speed efficiency, so Mazda added a throttle valve to close it off in low-power conditions. This has the same effect as altering the valve timing on a piston engine and improves the rotary’s breathing efficiency over a wider speed range. Following along? Good. Now the next part is where it gets confusing. 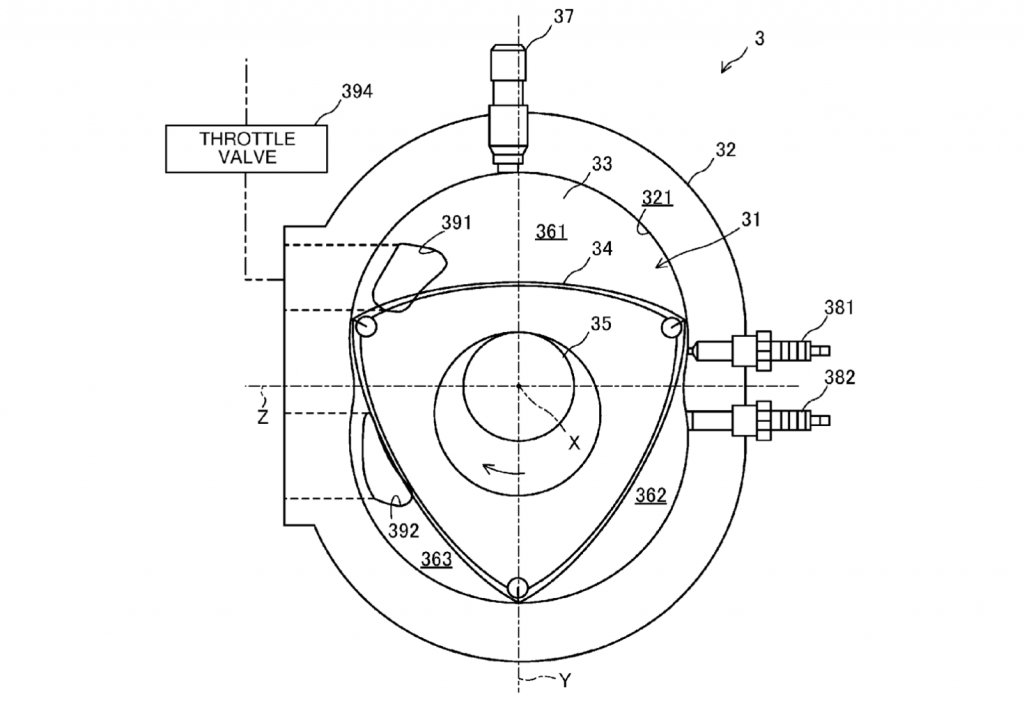 Fascinating already. And that “next part” refers to the electric motor; it’s fed by the EV’s high-voltage traction battery and can speed up or slow down the rotary engine as needed to optimize the intake into the combustion chamber. [Ed note: The patent, US 20220381190 A1, actually mentions that the slowing or speeding of the rotary engine could happen via a separate “assist motor” independent of the generator, though this assist motor, the patent makes clear, isn’t needed and is likely only mentioned to cover the invention broadly -DT].

As that story notes, the rotary engine here is just used to generate electricity, not drive the wheels themselves. But it’s a unique application of something that’s historically important to Mazda, and while it’s not the same as a new RX-7, it’s great to see this company trying something so different.  Here’s a basic description of the patent from document’s abstract:

[Long Ed note: Here’s a look at the control logic. You can see that, based on how much electricity is needed to keep the battery charged to satisfy the customer’s needs (i.e. run the electric motor and accessories), the rotary engine is set to a certain operating point. A computer is constantly reading engine RPM, determining intake air flow speed, and adjusting intake timing. On a typical piston-engine, this adjustment of intake timing would happen via a camshaft phaser — basically as stepper motor on a camshaft; a Wankel rotary engine doesn’t have a camshaft, so it has to adjust intake timing/duration another way. 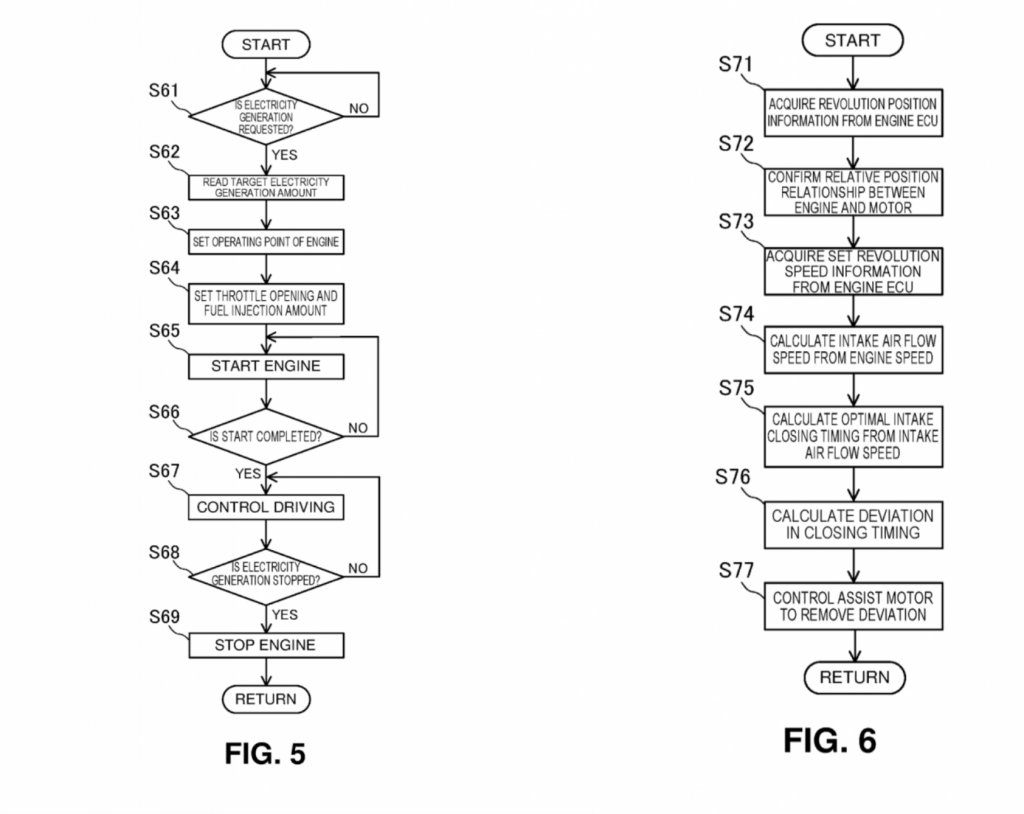 The patent breaks it down:

If that’s still not clear, maybe this and the diagram below will help a tiny bit: 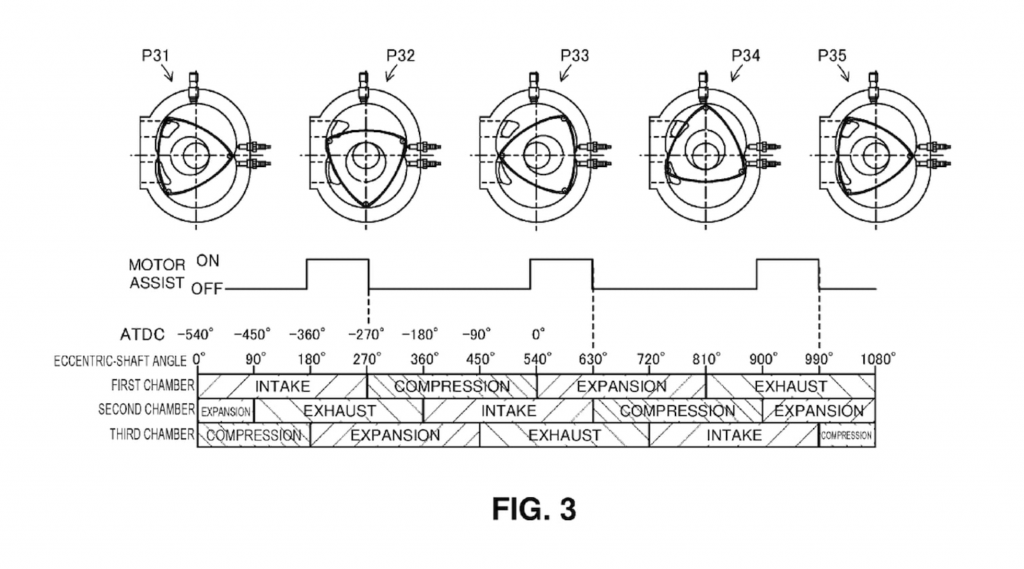 I’m going to be honest: I’m a little bit confused by the way this patent is worded, so engineers please chime in. But it seems to me that optimal intake timing occurs at a given RPM (the one the engine will run at most of the time) but there are certain scenarios (presumably when the battery is at a really low state of charge and draws lots of load from the generator, or the opposite where the battery is full/regen?) that would operate that engine outside of its optimal intake timing point; an electric motor lowers or raises the load on the engine to bring intake timing closer to optimal — that’s how I read this, though again, it’s a patent document, so not the clearest on earth. And also, I’m no powertrain engineer! -DT]

Right now, the MX-30 is only sold in California due to regulatory issues there, and it seems to have been sold out for a while. No word yet on when this range-extended MX-30 is due to come out, but it could inject some new life (and hopefully more of a national presence) into this unique machine, paving the way for Mazda to launch at least three new EVs by 2025. Though Mazda is small and definitely in catch-up mode on the EV front, it’s got a bunch of partnerships planned with several Japanese technology firms and wants electric cars to make up a quarter of its sales by 2030.

In the meantime, here’s hoping the MX-30 with this unusual rotary engine finally hits the streets soon. If this company can pull that off, surely I can succeed in finally getting David Tracy to buy an FB or FC RX-7 so he can bring years of glorious rotary wrenching content your way.