I have a confession to make. With my current life, there’s no way that I can reach the level of true Autopianism that the other journalists here have achieved.

When the cars of these other writers break down at the side of the road, it’s fodder for ‘content’; my cars conking out means that I miss a meeting at the office or I get a call from a spouse crying beside the road. As such, I have a two-car garage filled with exactly that number of vehicles. There’s absolutely no tolerance around my parts for the ten to twenty cars that some of my colleagues here possess. If David Tracy lived next door to me, I promise that neighbors would call the city to complain and demand nothing less than lethal injection for his crime of a backyard mud pit. If you want comedy gold, I really, really wish you could hear a recording from a few weeks back of my wife asking Mercedes Streeter ‘WHY do you own a BUS?’ or ‘Isn’t two Smart cars enough?’ and ‘where do all of these cars of yours GO?!??”

Still, I wouldn’t mind another car. As a GenXer the Radwood stuff I like tends to cost only about what a family of four will waste on a hellish weeklong trip to Disneyworld. These cars are too cheap NOT to buy, right? But what to do with them? Like a horse or an airplane, the care and feeding of such items usually dwarfs the cost of acquisition. Apparently I’m not alone with this problem, as there are various solutions currently on offer for people lacking the space to store and wrench.

First, you could purchase a place to put your toys. One example is this one where they’ve turned warehouse spaces into large private garages. Starting at around $135,000 for the empty shell, they’re about ten times more than I would likely spend on the car itself.

You could rent a space instead, which several companies bill as ‘Mancaves’. On the website for one of them, the image of a woman in Daisy Dukes and pics of grey-haired guys in old Mustangs make it seem like a bit of a misogynist Boomer playground and not a safe space for Nissan Figaro owners to watch Formula 1, but I hope that I’m wrong. These ‘caves’ cost anywhere from $1300 to $2000 per month, but that’s just for the big, depressing, empty space. You’ll have to bring almost everything in yourself to add life to it. Plus, except for the rare times you can persuade friends to show up, you’ll be sitting alone in a metal box, which is sort of sad.

For repairs, there are now places around the nation that offer an indoor space to wrench on your cars. You get lifts, tools, even expertise in some places for a monthly fee or hourly rates:

These all sound like interesting options, but what if you could combine them all into one, big, beautiful automotive utopia? Interestingly, there was talk on the staff Slack channel the other day that got me thinking that a solution could possibly be coming.

Like many automotive news sites, we are following the beginnings of what might be the unravelling of the Carvana organization. While we could go into numbers and what bankruptcy filing might look like, all that most of us on staff are concerned with is one thing: The fate of the giant car towers.

You’ve probably seen these things rising up off of the highway in urban areas. When you purchase your Carvana vehicle online, you apparently have the choice of getting it delivered to you or going to pick it up out of a ‘vending machine’, which is the glass tower. You receive a giant coin that you drop into a slot and your new car dramatically lowers from the tower and glides towards you. To be honest, it’s pure theater and pretty damn silly, but the sight of all those cars in such a small footprint is pretty dramatic to see.

What will be the fate of these things if Carvana goes belly up? In all honesty, probably the same as this one that was blocking highway expansion in Indianapolis:

This seems like such as waste, since these facilities could be repurposed into a viable business that would benefit many of us in the Autopian community, especially if it could offer different levels of services for a wide range of costs.

Presenting the Autopiatower for local members of Autopian; the next logical membership step in our growing community:

I was able to find a floorplan of a Carvana dealership online, and I annotated what some of the spaces appear to be:

It’s obvious that there’s a lot that could be done with these existing spaces to create a true mecca for car enthusiasts. Need to store a car indoors? How about a secure outdoor space? A place to wrench with the tools you don’t own or on a lift you don’t have? What about just hanging with the kind of people that will talk car stats instead of fantasy football? The Autopiatower would offer all of this, and more, in a space not much bigger than an acre or two and a few miles from your home.

The layouts for these places appear to all be different, but with the one floorplan that I nabbed you can see that changes I would propose to make:

The towers vary in size across the nation, but the biggest can hold over forty cars. It’s too bad that some owners might want to cover their cars, since it would be great to drive down the highway and see a big glass toybox filled with a variety of classic cars glowing in the night – what a way to show off your car!  There’s parking lot space for outdoor storage, and additional garages (maybe two stories with lifts) could be built in the lot to increase capacity if needed (maybe a fence around this place and of course twenty-four hour security cameras).

The ‘runway’ from the tower that the cars currently move on and the four ‘launch bays’ could totally be repurposed. The bays and runway would become the workshop areas with lifts and tools you can rent; one could be made into a hand wash/detail bay. Jason even suggested monitors and cameras on moving arms for easy how-to video watching and even remote assistance sessions. Still, just having others around helps not only with safety but with sharing of knowledge.

In the old lobby, there is currently clean blue carpeting that will now be soiled by the Autopian Members ‘Team Yugo Screw Yourself’ LeMons Race Car; electric go-carts displayed in the old reception desk space are to be raced in circles around the building in nicer weather.  All the glass remains so you see the work bay where in my drawing a guy is removing the intake to replace the fuel injectors on his dad’s Z32 and vowing to never, ever wrench on a car again (wait…that was me ten years ago). 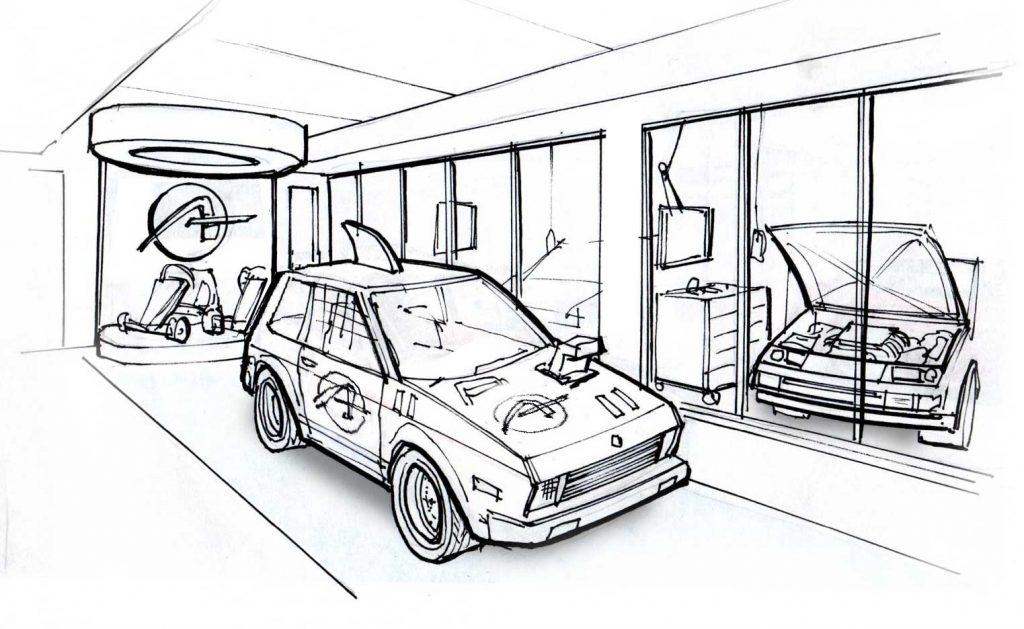 Further back in, there’s space for racing games, and the conference rooms are ripped open to make Jason’s Taillight Bar come to life! A couch, monitors, trouble-light chandeliers and a Wall of Taillights (Parts Bin Puzzlers, zoom in and test your wits- answers below). What a great place to debate things like which M5 is Best M5 (E39 is the correct answer, by the way) or PB Blaster versus some other miracle cure. Jason or others might make guest appearances for meet/greets, trivia nights, and however else Torch is willing to prostitute himself for the good of the company.

Membership would be at different levels, just like it is on the site now. A garage space would be most expensive, while outdoor parking or a preset number of hours in the workshop would be a level down. You could even rent a space hourly with a minimal membership fee. As with our website, we would want this to be an inclusive group of all kinds of people and cars. Any form of intolerance will simply not fly and, as they say, return you to ‘pre-membership status.’

Look, I have no issues with Carvana; I wish them the best and feel for the employees. However, I think that the towers are not central to the whole business model; they honestly make more sense as a hangout for us than some gimmicky marketing tool. Carvana could even lease them to the Autopian conglomerate for some needed cash; I’ve put together some rough numbers and it looks like could be a profitable business. If the worst case scenario for Carvana cannot be avoided, I do hope there’s some consideration put into what could be before the wrecking ball arrives.

We need a space. Like most things in life, cars are best enjoyed with other people.

[Ed Note: There are so many small things that need to get done in order to keep this site growing and thriving and taking on a real estate project sounds insane to me and yet… this is a great idea. I love this. I love this so much. It’s too much, too fast, right? Someone talk me out of this – MH]

Parts Bin Puzzlers– read below if you want answers on the Taillight Bar wall: