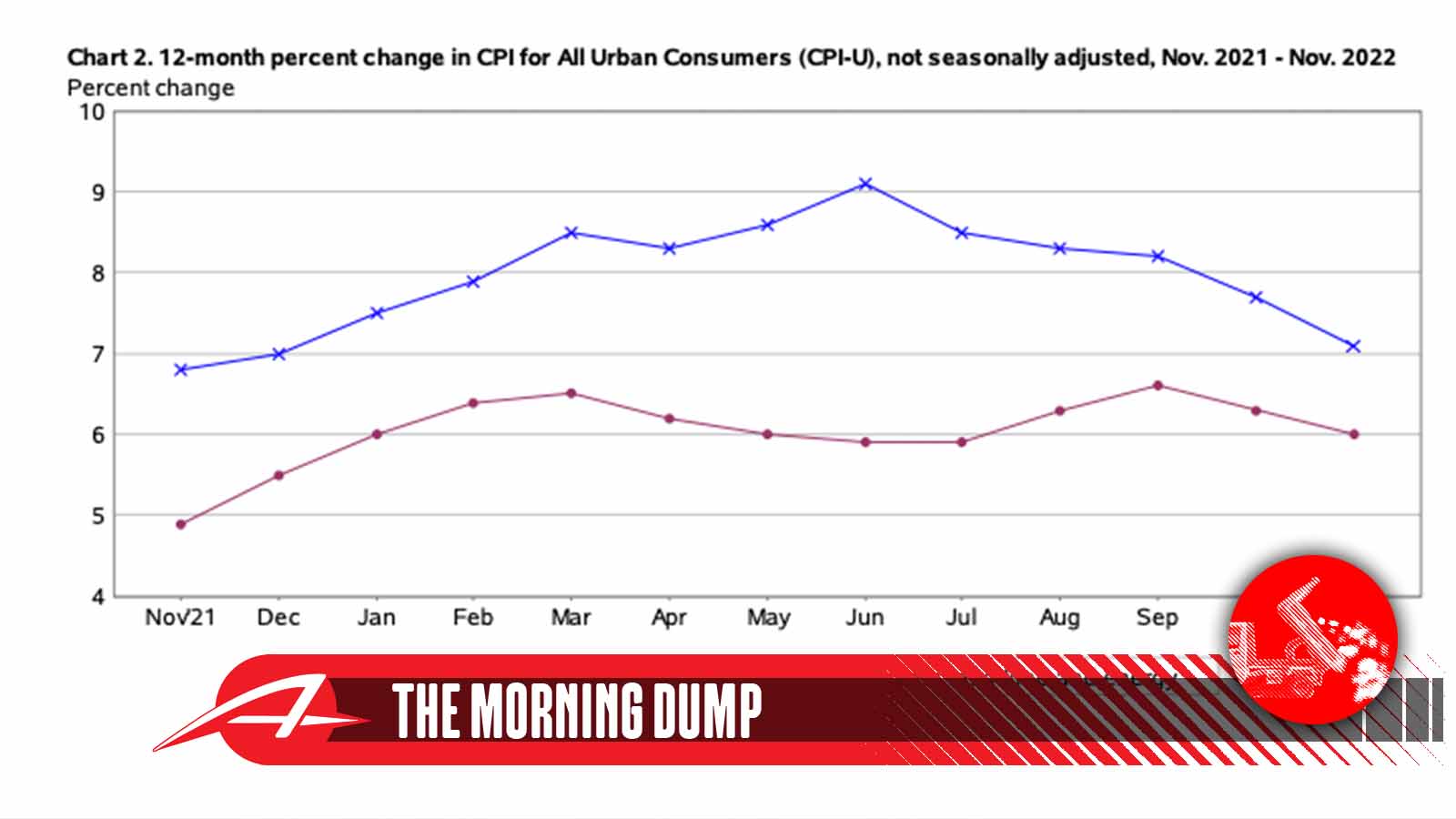 The CPI Update Is Good News

It’s easy to get lost in the ups and downs of economic news as reported by financial pubs and networks, which has more of a short-term impact on markets and is therefore more relevant for traders than it is for the average person. Unless you are a professional trader or a masochist it’s probably best to ignore it if you don’t find it fun. I find it a little fun.

Yesterday’s “Consumer Price Index” (CPI) release from the Bureau of Labor Statistics is good news and provides a little more useful information. This is highly simplistic, but the CPI report is an imperfect-yet-helpful measure of how much stuff costs and it’s one of the key indicators of inflation/deflation and therefore an indicator of where the economy is going.

YOY headline inflation down to just 7.1%

People were expecting the report to be higher. It’s lower, which is good because that means that inflation is maybe edging down:

What a chart, from Apollo’s Torsten Slok. #CPI pic.twitter.com/pXidABoMs7

The hope is that this news encouraged the Federal Reserve to not raise interest rates, meaning that it’ll remain easier for people to borrow money to buy cars and houses (and businesses to borrow money for investments). In reality, interest rates are probably going to go up, but this might be the last rate hike for a while.

The fun thing about the CPI is that it breaks down the cost of stuff into a lot of smaller categories. Here’s the one we care about:

The first seven numbers are month-over-month seasonally adjusted month-over-month changes going back to May and the last one is an unadjusted 12-month change. New vehicle prices are still up 7.2% from where they were a year ago, but they leveled out in November. Used car prices? Those keep dropping and are down 3.3% from a year ago.

Not to be a downer, but that doesn’t mean cars are cheap. They are not. They are still up about 33% compared to normal if depreciation still acted like it was supposed to act. Here’s some good news to end the story:

Now with an update to November CPI, confirmed that 3-month annualized change in average hourly earnings (+5.8%) was stronger than that for CPI (+3.7%) pic.twitter.com/Iai6pEYgUu

As a whole, people are earning wage increases faster than the cost of goods is increasing.

Toyota Doesn’t Expect To Sell A Ton Of New Prii

Here’s a curveball. There’s been a lot of interest in the new 2023 Toyota Prius within our readership. It was the most read-about car from the LA Auto Show. Hell, just this morning we’ve got a new Prius review and new Prius pricing and people seem to be curious.

Is Toyota expecting a huge number of sales from this newly redesigned model? Nope. They’re expecting the opposite. At the same press event Emily was at Toyota execs said they expect to move about 35,000 of the hybrids a month, at least according to Automotive News’s Larry P. Vellequette, who was also at the event (the “P” stands for: Pretty Cool Guy):

Toyota executives told Automotive News here at a media drive that the Japanese automaker saw more than 40,000 hand-raisers on its Toyota.com website alone in just the first few weeks following the reveal of the 2023 Prius on the eve of the Los Angeles Auto Show last month.

And yet, after spending the first few generations of its life as a cultural touchstone for cutting-edge environmentalism, the Prius is now just another hybrid in a Toyota lineup chock-full of hybrids — albeit one rated at up to 57 mpg and featuring a more powerful 2.0-liter engine. In a declining sedan market, the Toyota Prius will have to compete on equal terms against other hybrid sedans.

It’s a fair point. If you want to look like an environmentalist you’re probably getting an EV. The new Prius is attractive and quicker than the outgoing model and still extremely efficient. It’s also a great solution for people who need a car but don’t have easy access to a home charger. I’m hopeful this is wrong and the new Prius does better than 35,000 a year (assuming they can make more).

You Might Pay For Waymo Self-Driving Car Rides In SF

Reuters with the scoop that Google’s Waymo applied for a permit to charge people to take self-driving taxi rides in San Francisco. Currently, GM’s Cruise is the only company operating fares there with driverless cars. If Waymo follows suit, and it looks like it will, it could go a long way toward autonomy actually making money.

It’s one of the jokes of “driverless cars” that most of them still have backup human drivers that sit there in case something goes wrong. It’s a job designed to be replaced by computers. From the article:

Andrew Chatham, a software engineer at Waymo, said the company has updated the software that controls braking and acceleration to reduce shake and overall has surpassed targets for this year in terms of drivability.

The company has made its autonomous driving “more assertive,” Chatham said.

It’ll reportedly take months for approval, but San Francisco is a good test case for driverless cars since it has hills, weird weather, crowded streets, Uncle Jesses, cable cars, and all manner of other challenges.

Rivian. It’s a cool company. It makes attractive EV trucks/SUVs and Amazon vans. Only some of their forklifts have bed bugs. For all of the hype around other potential electric carmakers it’s notable that Rivian is actually building and delivering cars.

The problem: Building cars is super hard, you guys. Gonna go to Bloomberg (via Yahoo!) for an update on just how much cash it takes to make cars and why the company had to ditch a just-announced tie-up with Mercedes to build vans in Europe:

Rivian has its hands full trying to make R1T pickups and R1S sport utility vehicles for consumers, plus electric delivery vans for Amazon. It’s burning through about $1.5 billion a quarter by operating its lone assembly plant in Illinois at roughly half capacity, yet plans to spend $5 billion on a new factory near Atlanta. CEO RJ Scaringe apparently concluded that, in partnering with Mercedes to jointly produce electric vans in Europe, Rivian would be biting off more than it can chew.

I am sympathetic here. At The Autopian we’re doing video. We’re recording a podcast. We’re writing features. We’re launching memberships. We’re buying crazy cars. It’s a lot. Some days, it’s probably too much. It’s hard to stop. I got a nice email from a reader reminding me it’s my job to prevent David and Jason from burning out. I could… improve there.

Are you more or less likely to buy a new Prius than any previous generation one? Would you hold out for the faster PHEV Prime or are you good with the FWD standard hybrid?

Howdy! I'm the Publisher of The Autopian which means I'm to blame for at least a small part of this. I used to run another car site and then made movies and TV shows. Now I'm here to convince you to buy a Peugeot.
Read All My Posts »
PrevPreviousEverybody Have Fun Tonight: 2002 Volkswagen Cabrio vs 1992 Toyota Paseo
NextHow To Repurpose Carvana Vending Machine Towers To Build An Automotive ParadiseNext