Facebook-f Twitter Instagram Rss
Menu
Menu
Home » Meet The Adults Who Build Miniature Worlds So Their Meticulously-Crafted Toy Cars Will Look Real. I’m One Of Them.

Meet The Adults Who Build Miniature Worlds So Their Meticulously-Crafted Toy Cars Will Look Real. I’m One Of Them. 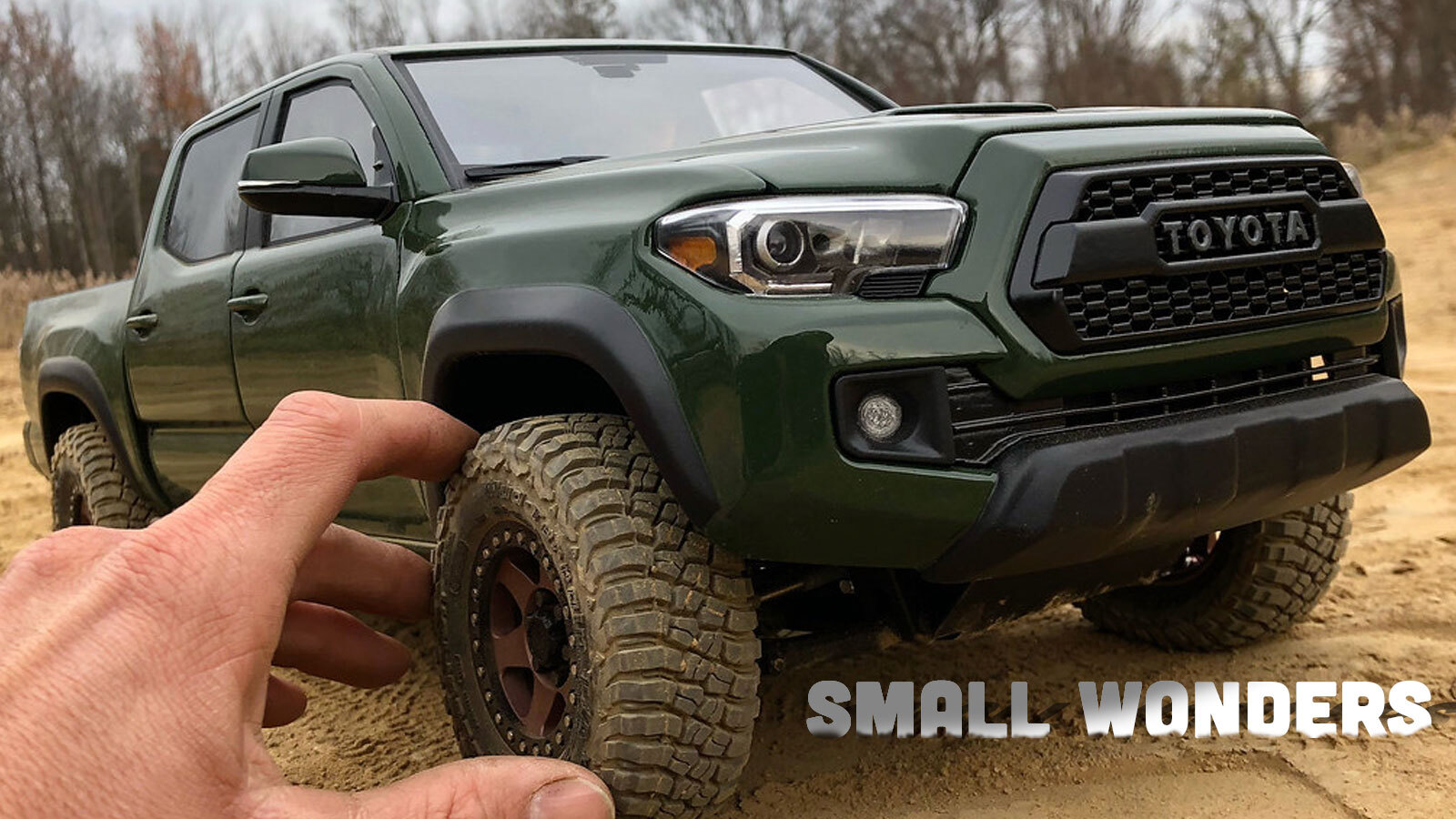 Do you remember when you fell in love with cars? If you’re anything like me, it happened long before you ever got near the driver’s seat of a real car. And, like me, the first objects of your affection were brightly-colored toy cars made from die-cast metal or injection-molded plastic, or — on that one Christmas morning — stamped steel, probably painted bright yellow. You opened the box, emblazoned with a logo from Tonka or Buddy-L or Ertl, and pulled out a thousand daydreams. You took it out to the sandbox and filled the bed with sand and then dumped it out again, over and over. You dug valleys and built hills and “drove” that little truck up and down again. It got scratched up and left out in the rain and started to rust around the edges, but that didn’t matter. You still loved it.

Most people leave behind the toy trucks when “real life” kicks in. We forget all those playground fantasies, the worlds we built in our heads. We lose track of the simple joys of childhood; it all gets pushed aside into a corner and beaten down by the responsibilities and stress of adulthood. But does it have to? Can’t we take just a little time, when we need a break, to just go play with a toy truck?

I certainly like to think so. And I’m not alone. An entire hobby-within-a-hobby has sprung up around highly scale-accurate radio controlled 4WD trucks, and backyard playgrounds in which to drive them. It’s toy trucks in a sandbox all over again, except that the trucks are hyper-realistic and self-propelled, and the sandboxes have to be seen to be believed.

You Can’t Buy These At Wal-Mart

Scale RC trucks, or “scalers” as they’re often called, are about as far from the New Bright toys sold at big box stores as Paul Hollywood’s signature bread recipes are from Wonder Bread. You can buy ready-to-run trucks, or complete kits that need to be assembled, but they’re just a starting point. A whole cottage industry of companies offering parts and components for scale trucks exists: axles, transmissions, frames, wheels and tires, and body shells end up getting mixed and matched into exactly the truck you want. And the results can be stunning.

Anatomy of a scale RC truck

If you’re familiar with RC model cars, this will all look familiar, but for those who aren’t, here’s a quick primer: A hand-held transmitter sends signals to a receiver mounted in the car. That signal is split into two (minimum) channels. One channel sends signals to a servo motor that works the steering, and the other sends signals to an electronic speed controller that controls the motor. One large battery powers the whole thing; these days it’s usually a two or three cell lithium-polymer battery. Everything is standardized and all works together across various manufacturers.

Underneath is where it starts to look like a real truck: two solid axles, a four-link suspension system held up by coil-over shock absorbers, and a drag link for the steering coming down from the chassis. The vast majority of these trucks are full-time 4WD and have “spools” in the axles (no differentials) so all four wheels receive power at all times. These don’t need to turn corners on pavement, so diffs aren’t needed.

The truck shown above is a basic standard off-the-shelf kit, in this case a Carisma SCA-1E Coyote. But if you want to get more complicated, you certainly can:

This is Tamiya’s legendary Bruiser, or more accurately, the 2012 re-issue of it. Tamiya first introduced this chassis in 1981, with either a Toyota Hilux or a Chevrolet Blazer body. It is a near-perfect scale representation of a real 4WD truck chassis, with leaf springs on both cast-aluminum axles and an absolute gem of a gearbox. It’s a 3 speed manual, shiftable from the transmitter. First gear is 4WD, while second and third disconnect the front axle for RWD only. It’s fun to get this truck stuck, shift into 4WD, and watch it pull itself out.

Tamiya being a world-famous plastic model company also means that the top side of the Bruiser is just as realistic as the underside.

Of course, if you really want to take things to the next level, you need to build the body of the truck from scratch. Lots of different materials can be used for this: styrene or PVC plastic sheet is common, as is wood, carved into shape using a Dremel tool, then smoothed out, sealed, and painted. My own only successful scratch-build to date, the Series III Land Rover shown here, is aluminum, formed over wooden bucks that I carved into shape. The results aren’t bad, but I am at best a rank amateur at this. 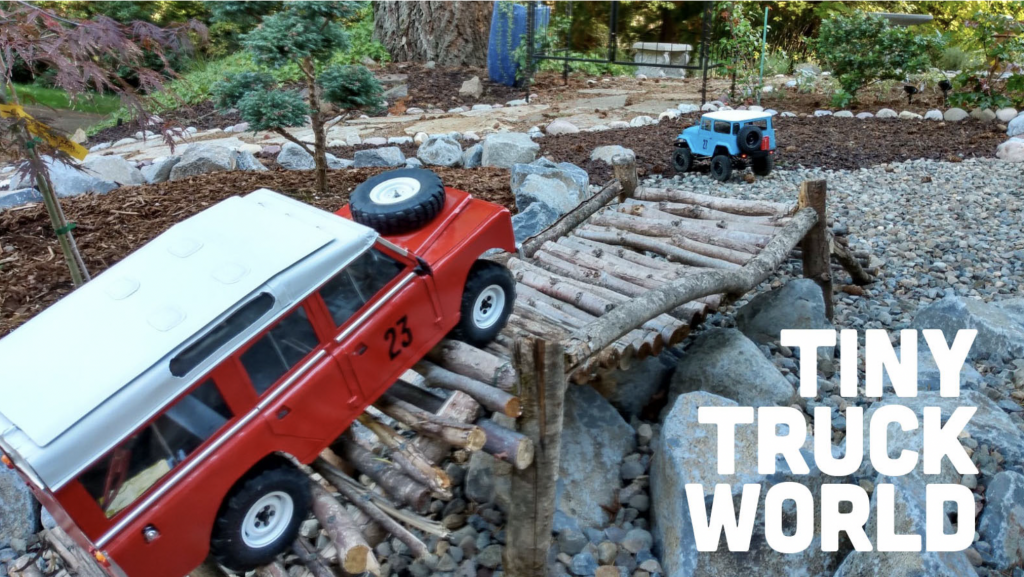 Richard Lutz, known as “pardonmyn00b” in various places around the internet, called this “RC dollhouse” Toyota Chinook RV shown below  “the most pointless thing I ever built,” but to me, this truck, and that statement, captures everything that’s wonderful about this hobby. Spending countless hours at a workbench painstakingly recreating a vehicle down to the smallest details wouldn’t be considered productive by most people, but doing something difficult for the sheer joy of being able to sit back and admire it and think, “I did that,” is not pointless at all. It’s art for art’s sake, and it is its own point, and its own reward.

Of course, unlike most art, scale RC trucks aren’t static. You can actually drive them, so you need a place to drive them. A highly-detailed scale truck, taken out of context, is a cool toy, but a scale truck driving along a scale gravel road, and pulling up in front of a scale gas station or garage, takes the experience to a whole new level.

“It’s a lot like model railroading,” says Ron Crowder, known as “2Beers” on the forums. His backyard course is a terraced, meandering series of dirt roads that wind through a 1/10 scale mining ghost town that he calls “Rocky River Farms.” Ron moved 40 yards of rocks and soil by hand, using only a shovel and a wheelbarrow, to create the terraces for the park, and he’s not done yet. Interspersed throughout the levels are several barns, shacks, garages, and a garage/service station, complete with its own fully-functional RC Model T Ford, all hand-made.

Ron is an absolute master of scale building, particularly the difficult art of “weathering” — making things look old by careful application of paint finishes. Everywhere you look, there is some new detail, some added little bit of texture, just waiting to delight, all with picture-perfect patina.

When Richard Lutz started building his backyard playground, known as “Smiggin’s Folly,” he was faced with the flat, featureless reality of suburbia, and had to build everything from the ground up. Dirt, rocks, concrete and chicken wire, dwarf trees and shrubs, and a massive amount of talent and commitment all add up to an absolutely delightful self-contained oasis of pure imagination that you would never expect in an Ohio back yard.

Smiggin’s Folly is also a cinematographer’s dream, as you can see:

For reference, because there isn’t much to go by, that Jeep in the video is about 16 inches long.

Both of these parks are many years in the making, but they, and many others, have inspired me to start working on my own little playground. My wife and I have been gradually re-landscaping the front of our house over the last couple of years, and I’ve been able to set aside a small area dedicated solely to scale RC trucks. All I have so far is a suspension bridge and a couple piles of rocks, but more details and obstacles are coming, and there’s still plenty of yard left to go.

Garden walkways become gravel roads through the jungle, photographed at the right angle and seen through the lens of imagination.

[Editor’s Note: You may have seen videos of scale models on YouTube that looked exactly like the real thing. Obviously, having incredibly-accurate vehicles and meticulously building a miniature world is part of it, but there’s also some trickery behind how the vehicles are shot, as small rocks/sticks/leaves tend to move differently than bigger ones with more inertia.

I asked Mark about that, and — after reaching out to Richard Lutz — he replied: “Shot at double frame rate and then displayed at half speed. Apparently most people started doing it that way a while ago and I didn’t realize it. I rarely shoot video of my own trucks, so I’m not up on all the tricks.” Not everyone does it, of course, but it can help make miniature worlds look like the full-sized one.

Hit up YouTube to find videos like the one above; sometimes it’s legitimately hard to tell that these are scale models!

You Can Play, Too!

Of course, you don’t have to go this far to join in on the fun. There are plenty of good off-the-shelf options for trucks, either ready-to-run or in kit form, to get you started, and drive over whatever terrain you happen to have already. Or take it with you when you hike, or camp. These trucks aren’t fast – they typically top out at a brisk jogging pace – so you don’t need to worry about throwing dirt and gravel around or damaging plants when driving. And the challenge of learning how to drive one of these trucks well is rewarding. Take it easy, pick your line, keep it “shiny side up,” just like real 4WD trucks.

If you get bitten by the bug, and want to really dive in, there are plenty of resources to help. The Scale Builder’s Guild and RCCrawler forums are chock-full of inspiration, information, tutorials, tips and tricks, and resources for building your perfect beast. Facebook groups can connect you with local clubs you can drive with. And if you want to get really serious, there are competitions at local, regional, national, and even international levels. (But you won’t see me there. Too many rules. I just want to build stuff and drive it around.)

The new frontier in the scale truck world is 3D printing. Everything from chassis parts to scale details to whole body shells are being designed in 3D CAD programs and emerging from spools of plastic filament. I myself just got a 3D printer last year, and haven’t had much time to work with it, but what i have done is encouraging. I’m not sure I prefer it to making things by hand, but it adds another dimension to the hobby. And because 3D printing is so open-source and community-based, it’s not hard to find files that are ready-to-print that someone else has already designed. 3D printing a part that someone else laid out lends a sense of community to a hobby that is often solitary.

I’ve just shown the tip of a very large iceberg here. The possibilities are staggering: multi-speed transmissions with selectable 2WD/4WD, remote-lockable diffs, and portal axles are all available, and trucks can range in size from teeny-tiny to gigantic, though most hover around 1:8-1:10 scale, approximately 18 inches long.

It’s a crazy, mixed-up, fast-paced world. Sometimes it helps to scale things down a bit, literally, and focus on a simple joy, like driving a toy truck around a miniature landscape. It’s important to make a little space to play.