Member Rides: An Alfa Romeo GTV And A Classic Diesel Benz Are A Perfect Pairing 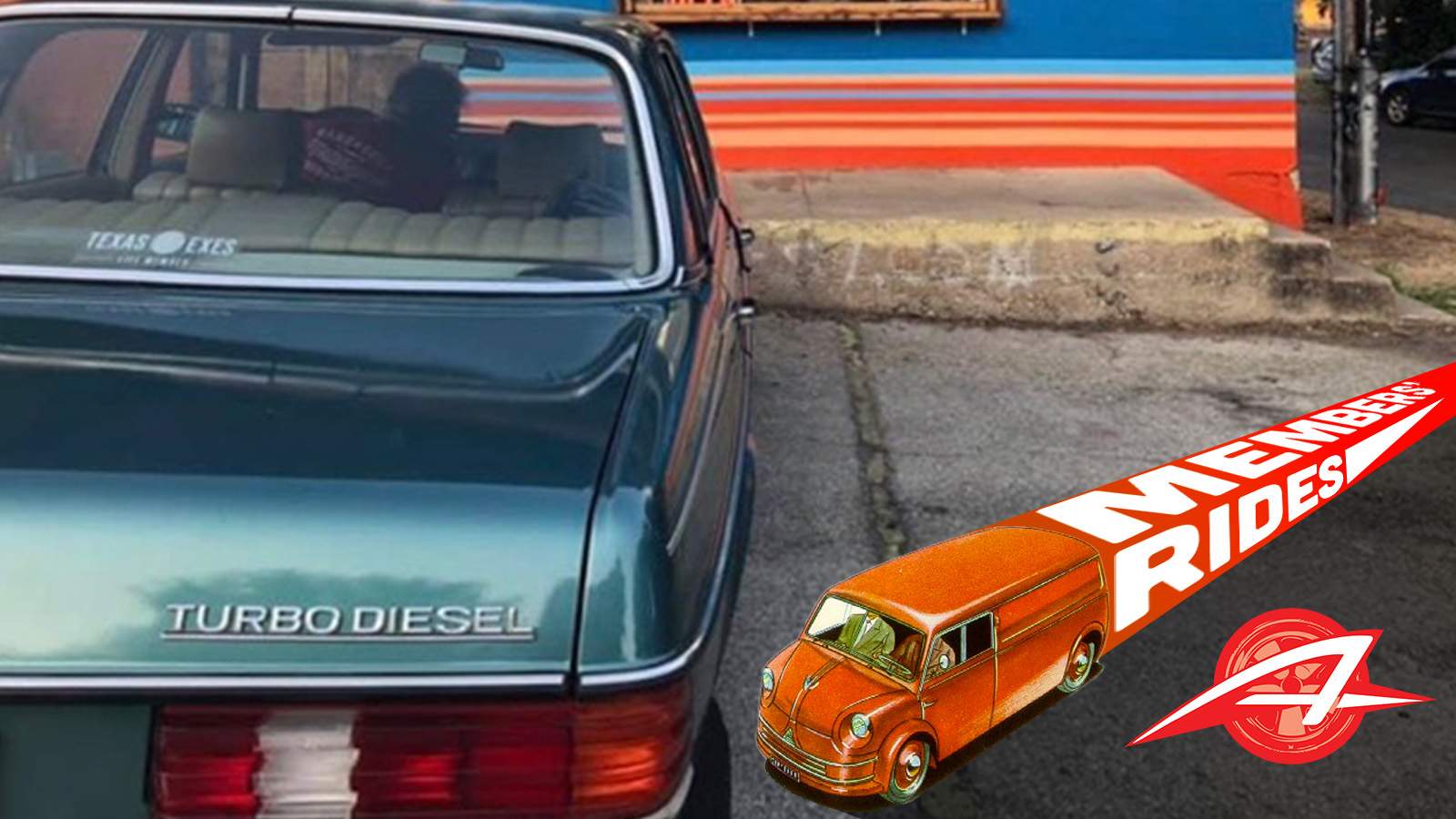 My first car was a 1978 Mercedes 300D sedan and, at least for quality of door-thunk, it tends to be the car I measure everything else I own against. I’ve never owned an Alfa, though, and that’s something I clearly need to correct. Credit to reader and Autopian member Dutcher Stiles who has both!

(Welcome to Member Rides. This is the weekly feature where we look at people who became members of the site by signing up here and parting with a little of their hard-earned dough to keep The Autopian going. Our plan is to do these every week! Today it’s Dutcher’s turn!)

Autopian: Thanks for doing this! Tell us who you are and what you’ve got.

I live in Austin, Texas. I’m an IT Auditor for a state agency.

1982 Mercedes Benz 300D – Blue-green metallic (877U) sedan I bought for my mother from my Alfa mechanic in the 90s. I inherited it after she passed away four years ago. In a state of gradual improvement, with the Sacred Heart Auto League medallion on the dash keeping mom’s memory.

Autopian: That’s a fun mix. How did you get into cars?

My first memories of wrenching were mildly traumatic–my dad yelling instructions at me on how to synchronize an MG’s SU carbs while lounging in a lawn chain, scotch in hand. Years later, I worked with a couple of guys poaching neglected old (mostly) MOPARS from the fields and lawns of central Texas and putting Darts, Dusters, and Furys into the hands of UT coeds. Undercapitalized, the wrong ’73 Roadrunner put an end to that. I owned a sequence of Ordinary Fords With Capital Letters (SVT Contour, SHO Taurus, Focus RS). I’m currently wrenching my way up to rehabbing my Alfa – there’s some anxiety there, but I have learned to gouge less and take my time.

Autopian: So, basically, your life was “Dazed & Confused” for a few years?

More like Slacker, but I do live around the corner from the Top Notch!

Autopian: I feel like there’s a story with that Roadrunner…

It was a black-on-black red striped behemoth with the 400 with an anti-social cherry bomb exhaust. It was the first “muscle” car we bought, represented all the cash we had, and no one wanted it. It acquired parking tickets until we unloaded it at a loss.   Then a Ford Tempo was another loss, and we had no more cash, and felt beat down, and the partnership dissolved after two years.

Autopian: I had a ’78 300D and loved it. That’s an excellent color and a lovely tribute to your mother. What kind of improvements are you making?

It’s all maintenance, reliability, and cosmetics. I’ve done suspension, injectors, and I’m in the continuous pursuit of vacuum (doors got sorted, vent pods went). The next project is to pull the dash to repair the cracks and replace the vacuum-leaking HVAC pods underneath.

Autopian: Feel free to send any pics of any of those Fast Fords.

Here’s the Focus RS in its native habitat. It was my “recovered from cancer” present to myself – I even took advantage of the track day in Utah that came with the RS. The Adrenaline Academy was a real gas and almost washed away my bitterness to Ford due to the head gasket. The RS was a blast when it worked. After the head gasket work was done, I had two issues with the cooling system (and my wife got cancer) so I went off to Carvana and I dailied the Mercedes for a couple of years.

The SHO Taurus was a bit of a disappointment. Great engine mated with a sluggish transmission, and too big for around town – it felt like wearing a pair of tight pants. But it was a great highway car – I had to drive out to Midland periodically to take care of my ailing parents and it was home on that stretch between Brady and Garden City. The recalls wore me down, though, and it didn’t seem well stapled together.

Autopian? What about the Contour SVT? That’s on my list.

Probably the best part was the exhaust note; even stock, it had that 2.5 V6 tenor that reminded me of my old Alfa GTV6. It handled well and had only one reliability issue (a fuel pump failure) that was covered in the last week of the warranty. Decent transmission, too. But a dark blue interior with a black exterior? Why, Ford?

Autopian: What’s the anxiety with the Alfa other than… all the completely understandable ones? Which of the many potential faults is currently weighing your mind?

Before my son was born, I diagnosed the SPICA pump failure. I may have been wrong in retrospect, but I charged ahead with ordering the parts for a Weber conversion. I pulled the head which was in bad shape, and ordered a replacement. I waited and waited, then it finally came a week after my son was born. Other things took priority… and the newborn is now a freshman in high school and the head is still on a shelf.

I have a nice dry place for it and have been acquiring the basic wrenching skills that I lacked, mostly patience and avoiding the gouge, by maintaining the Mercedes and rebuilding the scooter engine. I’ve been sorting and saving and learning. Next year I’ll make some progress, and learn to weld. I learned to manage the shame I felt for having a non-running car, especially such a nice one. Something to do with my dad? Probably. But now that he’s passed, it’s time to sort it out.

Last year I tried to write something about every vehicle I had substantial memories of – most of it is here – it made some sense to try to figure out why I was thinking when I got these vehicles and if it made any difference.

If you’re a member and want to be highlighted please check your email for a link to a survey you can fill out. If you don’t want to be featured, that’s also fine. If you want to become a member go here.

Member Rides: The Kia Stinger Is A Great Everything-In-One Car

Member Rides: ’98z28′ Has To Be The Only Person In America With These Three Cars

Howdy! I'm the Publisher of The Autopian which means I'm to blame for at least a small part of this. I used to run another car site and then made movies and TV shows. Now I'm here to convince you to buy a Peugeot.
Read All My Posts »
PrevPreviousSomething is Eating All The Silver 2004-2009 Toyota Prius Bumpers
NextHere’s Everything At The 2023 Tokyo Auto Salon We’re Excited About (So Far)Next